ECCLESMACHAN is a village, about 14 miles north from Uphall station on the Edinburgh and Bathgate section of the North British railway, and 5 miles south-east from Linlithgow. The parish, which is in the small debts court district of Linlithgow, is 4 miles in length and 1 in breadth, and is watered by the Brox and Bueux brooks, tributaries of the Almond. By the "Local Government (Scotland) Act, 1889 " (52 453 Vict. c. 50), boundary orders 108 and 122, portions of Dalmeny and Linlithgow parishes have been added to Ecclesmachan. Robert Liston F.R.S. the eminent surgeon, was born here 28 Oct. 1794, his father then being parish minister; he died 7 Dec. 1847. Near the church is a weak sulphureous spring, called the "Bunion Well." The Marquess of Linlithgow K.T., G.C.M G G.O.V.O., P.O.; Peter Thomson esq. of Binny, the trustees of the late William Thomson, of Craigbinning, and Edinburgh Parish Council, are the principal landowners. The surface of the soil is flat and sandy. The land is under tillage, with a fair sprinkling of wood. Freestone and sandstone are plentiful in the parish. The area of the parish is 4,066 acres ; rateable value, £8,552; population in 1891, 606 and in 1901, 481 civil and 489 ecclesiastical. 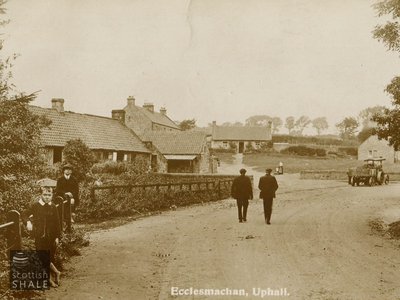