UPHALL is a parish and village; the former, in the small debt court district of Linlithgow, is bounded by Kirkliston on the north-east and east, by Mid-Calder on the south, Livingstone on the west, and Linlithgow and Ecclesmachan on the north. It is intersected from west to east by the road from Glasgow to Edinburgh, and is watered by a rivulet called Broxburn; its extent from north to south is 4 miles, with a breadth of 3 miles. Besides the village of Uphall, it contains the small town of Broxburn. Uphall is 1 mile north of the station of that name on the main line of the North British railway, and 1 mile south of Broxburn is Drumshoreland station, on the same line; the village is distant 11 miles west from Edinburgh and 5 northeast from Bathgate. In the Buchan vault of the parish church are buried the Hon. Henry Erskine, 2nd son of the 10th Earl of Buchan, lord advocate of Scotland, who died 8 Oct. 1817, and his brother Thomas, 3rd son of the 10th Earl, Lord High Chancellor of Great Britain, created Baron Erskine, 1806, and died in 1823.

Shale, which is now so largely used in the manufacture of paraffin oil, of which there are three extensive works in the locality, is found in abundance in the neighbourhood, and is said to be of a very rich quality; owing to this important industry, there has been a great increase in the population within the past few years; bone manures are also manufactured in the parish. The district abounds in coal, sandstone, limestone and ironstone. In this parish is Almondell House, a seat of the Earl of Buchan, and now occupied by George Kirkwood Johnston esq. Houston House, the property of John Campbell Shairp esq. J.P. is now the residence of Major Logan Home. Middleton Hall and estate have been bought by the Broxburn Oil Co. Limited. The Earl of Buchan, the trustees of the late Robert Bell esq. John Campbell Shairp esq. J.P. and the Broxburn Oil Co. Limited are the principal landowners. The area comprises 4.561 acres; rateable value, £69,907; population in 1891, 8,653. in 1901 was 10,536, of which 1,840 are in the village. 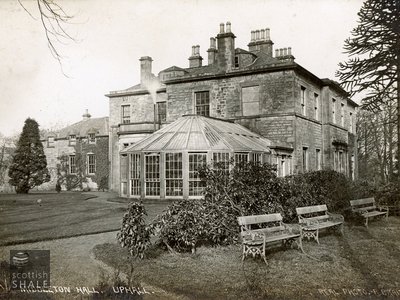 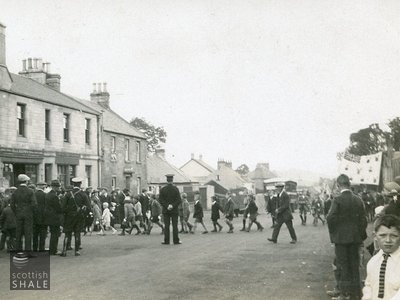 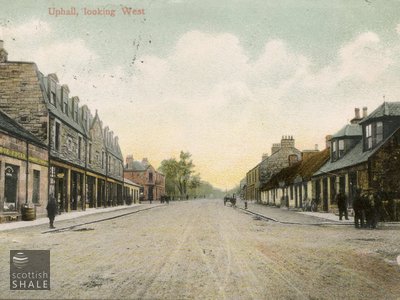 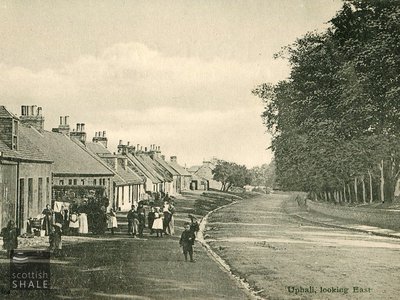