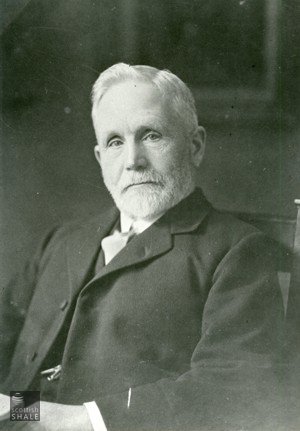 James Bryson, a former engineer at an iron foundry in Larbert, became general manager of Pumpherston Oil Works in 1887. He later became joint Managing Director of the Pumpherston Oil Co. Ltd and, after the amalgamation of the Scottish shale oil companies, General Manager, and a director, of Scottish Oils Ltd.

Together with William Fraser (Senior), founder of the Pumpherston Oil Co. Ltd, and James Jones, Managing Director of the Dalmeny Oil Co. Ltd, Bryson designed the highly successful Bryson (or Pumpherston) retort which was patented in 1894. The retort increased throughput almost threefold to 4 or 5 tons of shale per day and reduced the cost of retorting by almost half. It became the basic plant of the Scottish industry until production of shale oil ceased in 1962 and has been used extensively in other shale oil enterprises in North America and elsewhere.

The death took place last night at his residence at Ballengiech, Pumpherston, Mid Calder, of Mr James Bryson, in his 77th year. He was general works manager of the Scottish Oils (Ltd.) and a director of the Company. Mr Bryson served on the Parish School Board for many years, and up to the time of his death was a member of Midlothian County Council and the Lothians War Pensions Committee, on both of which he did excellent work. He was a devoted Churchman, and a generous donor to Bridgend U.F. Church, Mid Calder.

Mr James Bryson, J.P., the general manager of Scottish Oils Ltd., died at his residence at Pumpherston, Midcalder, last night after a lengthy illness. Mr Bryson, who was in his 77th year, was trained as an engineer at Coatbridge, and in 1887 he was appointed manager of the Pumpherston Oil Works. At a later date he was made a director of Scottish Oils Ltd. Mr Bryson was associated with two other gentlemen in an important patent in connection with the retorting of shale. He was closely identified with the public life of Midlothian and at the time of his death he was a member of Midlothian County Council and the Lothians War Pensions Committee, on which he did good work. In politics he was a Liberal, and for a number of years he was president of Midlothian Liberal Association. He is survived by his widow and two daughters, both of whom are married, one to Dr Scott, Broxburn, and the other to Mr Sutherland, merchant, Bathgate.

"I have to refer with great regret to the loss which the company has sustained by the death , which occurred in January, of our general works manager, Mr James Bryson. Mr Bryson, who loyally served the industry for over 40 years, was of the type in which the best traditions of the British race are exhibited. His gifts were freely placed at the disposal of the company, and he contributed in large measure to technical progress not only in the Scottish shale industry but also in the petroleum industry. His efforts stimulated and enhanced the former prosperity of the Scottish shale industry, and his persistent endeavours helped in no small degree to surmount the grave difficulties of recent years."