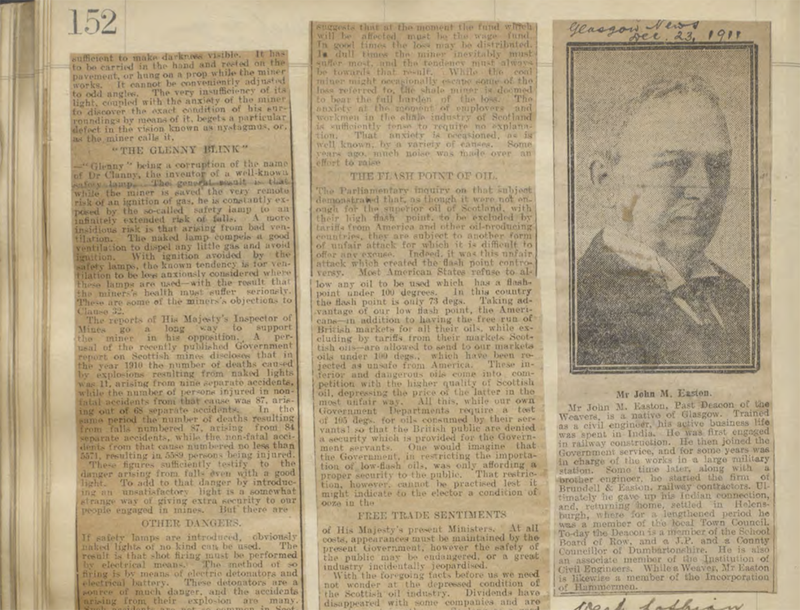 A book of newspaper cuttings in the BP archive (see full record 215305-2of2 ) contains a profile of John M. Easton, published in the Glasgow News on 23rd December 1911. The nature of Mr. Easton's association with the shale oil industry remains unclear. A correspondent informs us that "He was born in Shoreditch, London to David Easton and Janet Bannatyne being Baptised there on 1st Feb 1837. He was married to Lucy Turner.  They had two children, both born in India, Duncan Turner (b 1872) and Janet Lucy (b 1874). He died at Tordarroch, Douglas Drive, Helensburgh, Dunbartonshire on 20th Sept 1928."

Mr John M. Easton, Past Deacon of the Weavers, is a native of Glasgow. Trained as a civil engineer, his active business life was spent in India. He was first engaged in railway construction. He then joined the Government service, and for some years was in charge of the works in a large military station. Some time later, along with a brother engineer, he started the firm of Brundell & Easton, railway contractors. Ultimately he gave up his Indian connection, and, returning home, settled in Helensburgh, where for a lengthened period he was a member of the local Town Council. To-day the Deacon is a member of the School Board of Row, and a J.P. and a County Councillor of Dumbartonshire. He is also an associate member of the Institution of Civil Engineers. While a Weaver, Mr Easton is likewise a member of the Incorporation of Hammermen.