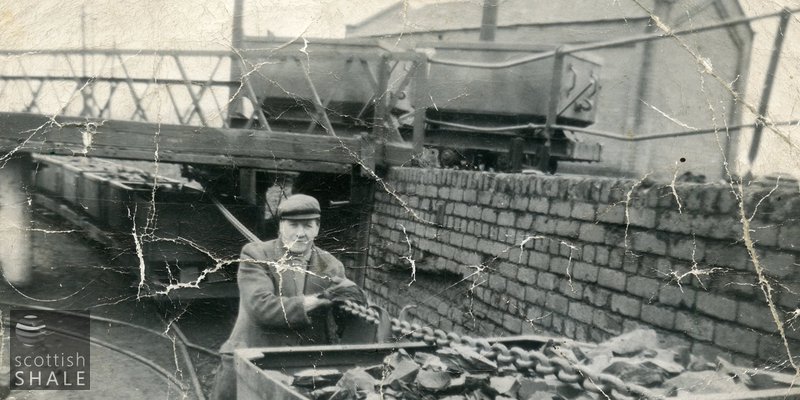 A pithead runner was responsible for taking full hutches off the cages when they came up from the pit and guiding them over the weighbridge before sending them on to be loaded into wagons for transportation to the crude oil works.

MG started working in the mines as a pit bottomer at aged 14, he then went on to look after the endless haluage in the mine before starting a job on the surface helping to repair the hutches before getting a job as pithead worker at age 17.

The Board of Trade Census of Wages conducted in 1886 records that pithead runners earned an average weekly wage of 19s 3d. The report states that these men generally worked from 54 to 57 hours per week, exclusive of meal times.

In 1925, the Report of a Court of Investigation Concerning the Wages Position in the Scottish Shale Oil Industry, records that a 46.5 hour week was normally worked by surface workers. Average weekly earnings for men working above ground were £2 9s 5d.

Boys aged 17 working at the pithead in 1930 were paid approximately 30s per week (Source: Oral history account by MG).

In 1958, an Agreement Between the Scottish Shale Oil Companies and the National Union of Shale Miners & Oil Workers records that runners above ground earned 27s 8d per shift. Above ground workers handling shale worked an 11 day fortnight averaging 40.5 hours per week.

I got a job in the pithead taking the full hutches off the cages when they came up, and steadying them over a weighbridge, where there was a man weighed them and also there was another man there checked the weights for the miners, he was called the checkweighman for the miners and each hutch had a token on it, representing the man that hutch belonged to, and this was handed in and the weight put against them for payments. Then the hutches were sent on to the tumbler and loaded into wagons for despatch to Oakbank at that time, and Addiewell. MG, aged 17, Pithead Worker, Westwood Pit, 1930