A papermill on the Breich water 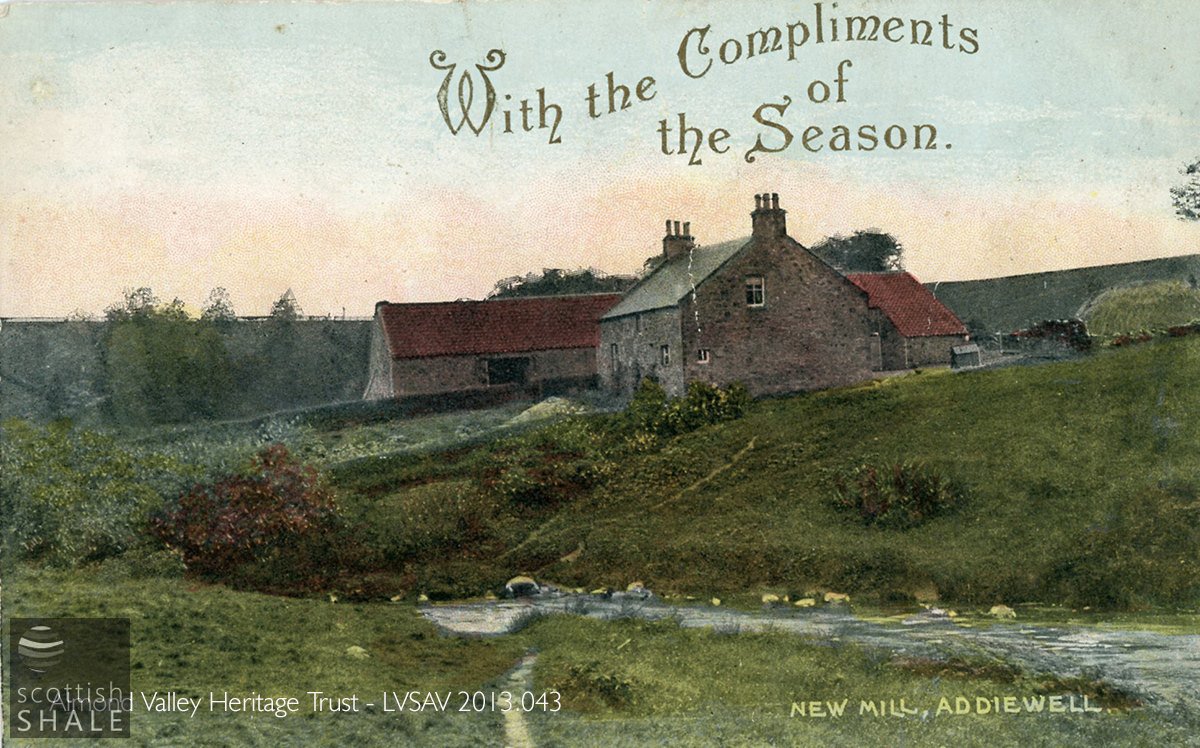 A rather un-seasonal greetings card, showing the New Mill (in Whitburn parish) from the south of the Breich Water (in West Calder parish). Presumably stepping stones were set into the river. The stone-built farmhouse once housed workers in the papermill, while the pantiled sheds beyond would have been used for the production of paper boards. 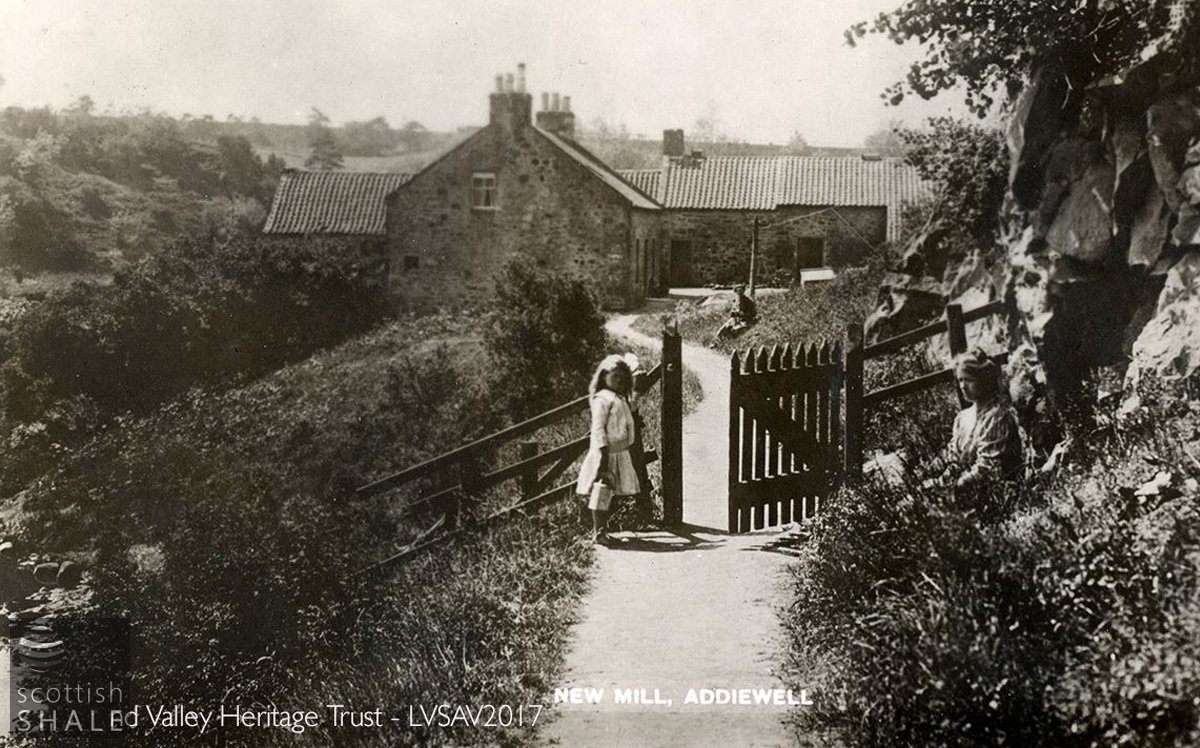 A peaceful scene c.1910 showing the house, the mill sheds, ladies enjoying the sunshine, and a wee girl with a milk can. The footpath from which the photograph is taken leads back to Addiewell village. Breich Water is to the left.

The ruins of the New-Mill of Breich lie in peaceful obscurity, a little upstream from where the B792 Blackburn to West Calder Road crosses the Breich water near Addiewell. The mill is described in the OS name book of c.1855 as:

"A building of two stories lately occupied as a paper mill in which is manufactured the coarse description of pasteboard known as “Mill Board” used in book binding. It is in working order, has the usual fittings of a papermill, together with the residences of the tenants, there is also a drying green. The property of Mr. White of Rutherglen, and occupied by Mr J. Milne."

The mill and associated housing seems to have been constructed some time prior to 1806; the title “New Mill of Breich” presumably distinguishing it from Briech Mill, about a mile downstream, that was later to be buried beneath the bing of Addiewell oil works. During much of its period of use as a board mill, the New Mill was owned by Walter Whyte of Rutherglen, who also had interests in the Fala Mill, further upstream on the Breich Water, and the Red Mill on the River Almond. Whyte advertised the mill to let in 1868, but perhaps no parties were interested in continuing manufacture at the mill, as later records refer simply to a farmhouse and lands at New-Mill of Breich.

By 1895, when the second edition OS map was surveyed, the weir had been removed, much of the mill lade infilled, and some of the major mill buildings had been demolished. Postcards from the early 20th century show remaining mill buildings and residence in use as a farm, with a fine vegetable garden leading down to the water-side. The site was finally abandoned around the time of the second world war.

Today, the outline of the house and some of the mill buildings survive as low walls, and a muddy trackway still links the site with the main road at Cuthill farm. The picturesque riverside footpath, cut into the hillside, that once linked the mill with Addiewell, is now sadly overgrown and impassable.

25" OS map c.1854, showing the site of the weir and the route of the mill lade and tail race of the water mill.

25" OS map c.1895. The weir, lade, and watercourses have disappeared, and the substantial buildings that would have housed the mill wheel and machinery have been demolished. 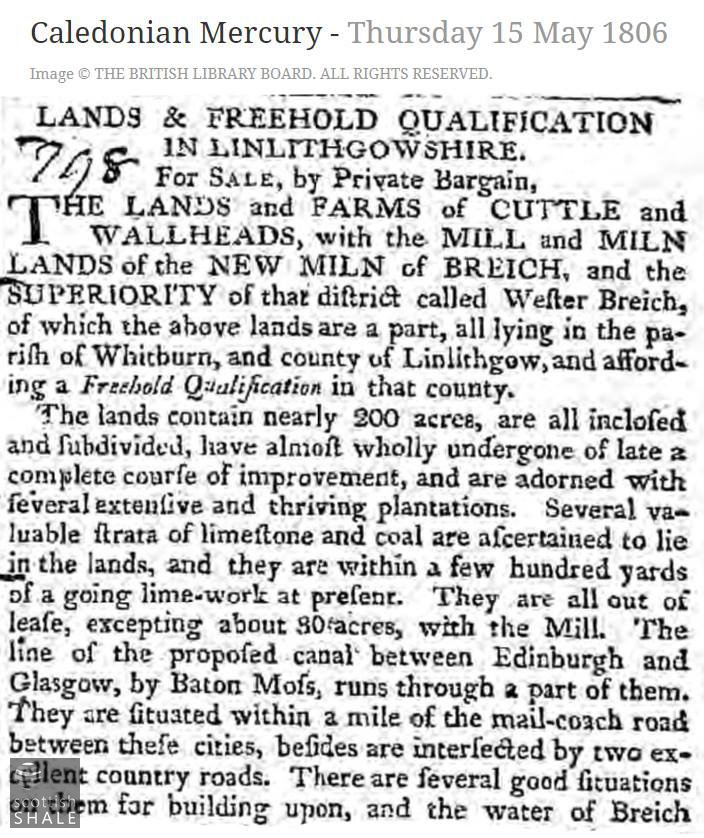 The earliest known reference to the New Mill of Breich. 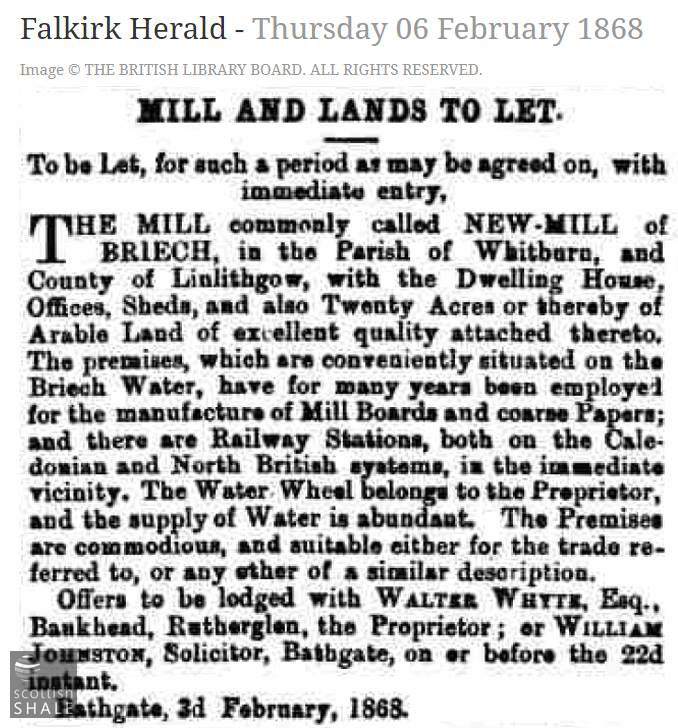 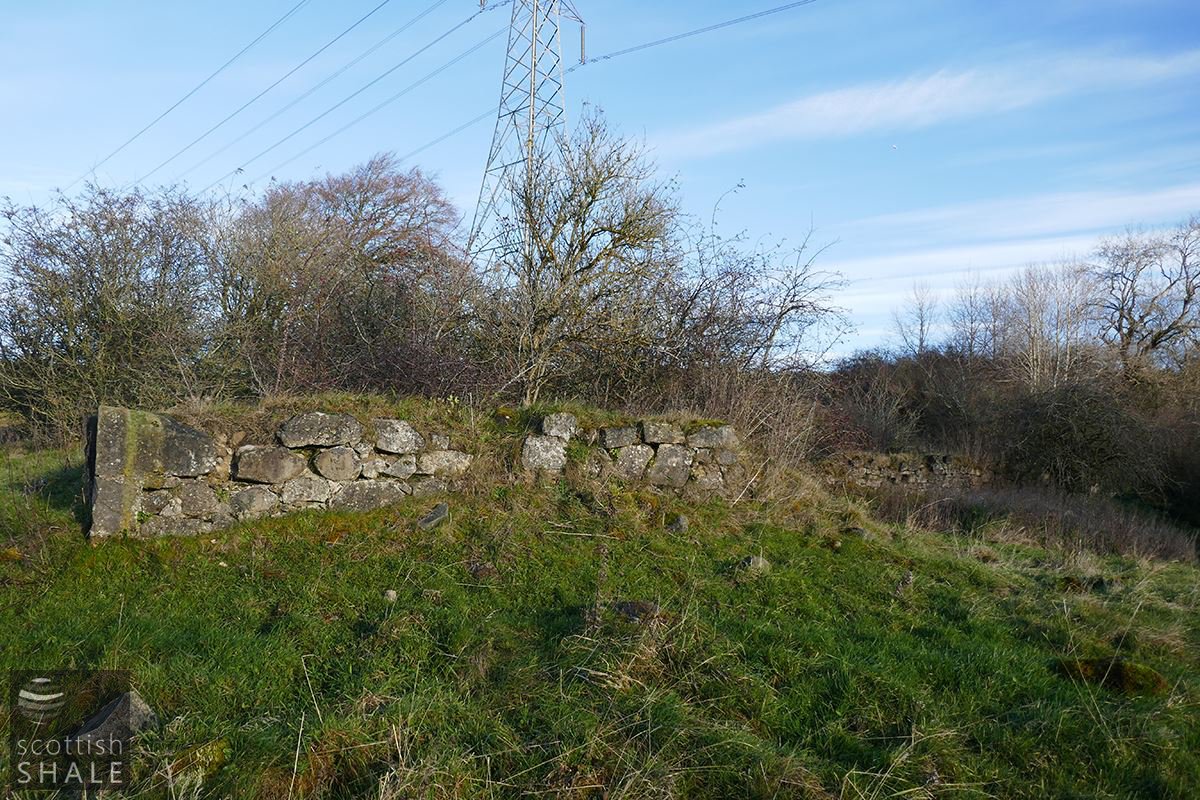 The wall in the foreground marks the gable end of the papermill sheds, while that on the right is the remains of the dwellings. 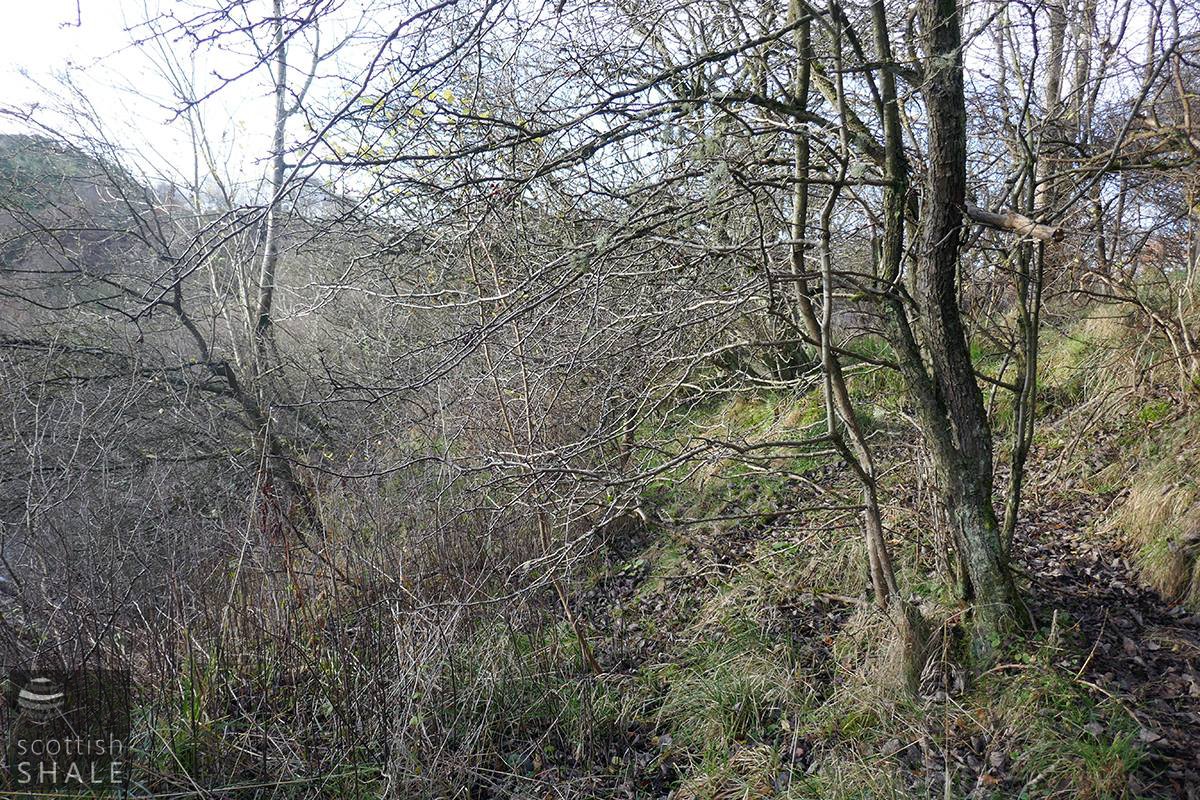 The now-impassable route of the footpath, with the Breich water on the left, looking towards the site of New Mill. 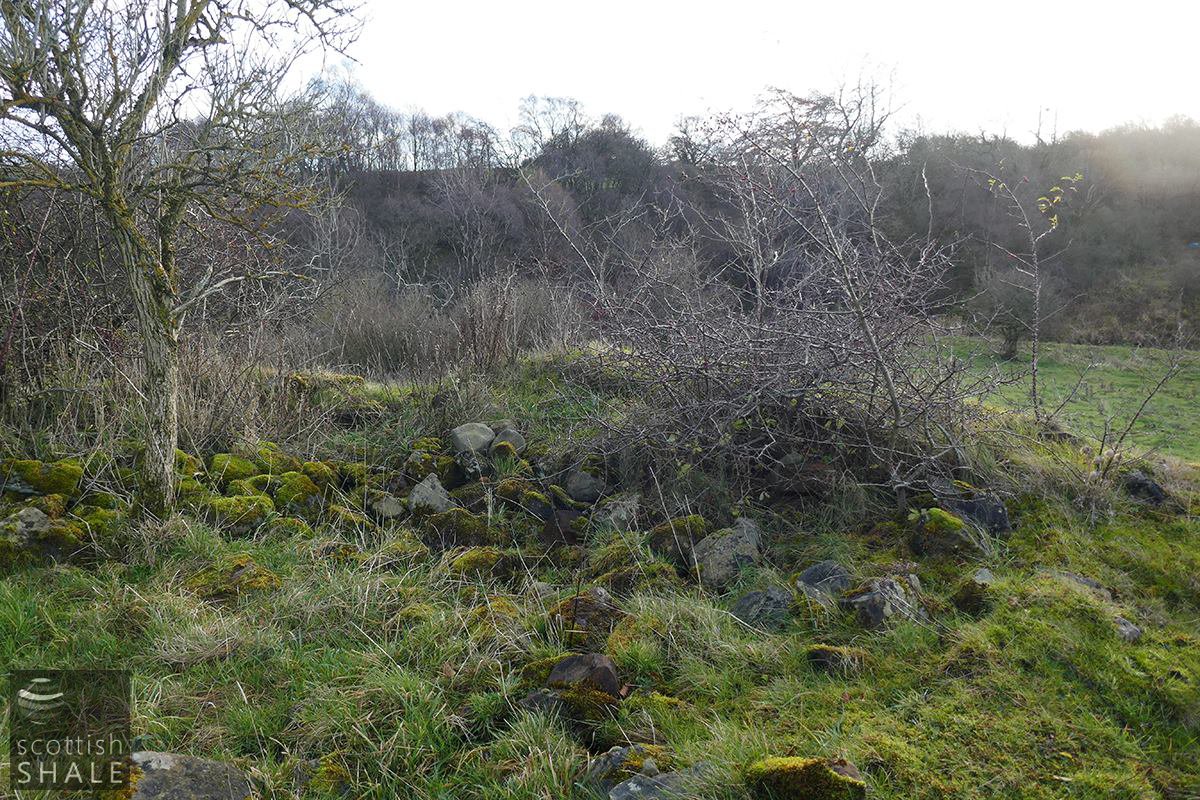 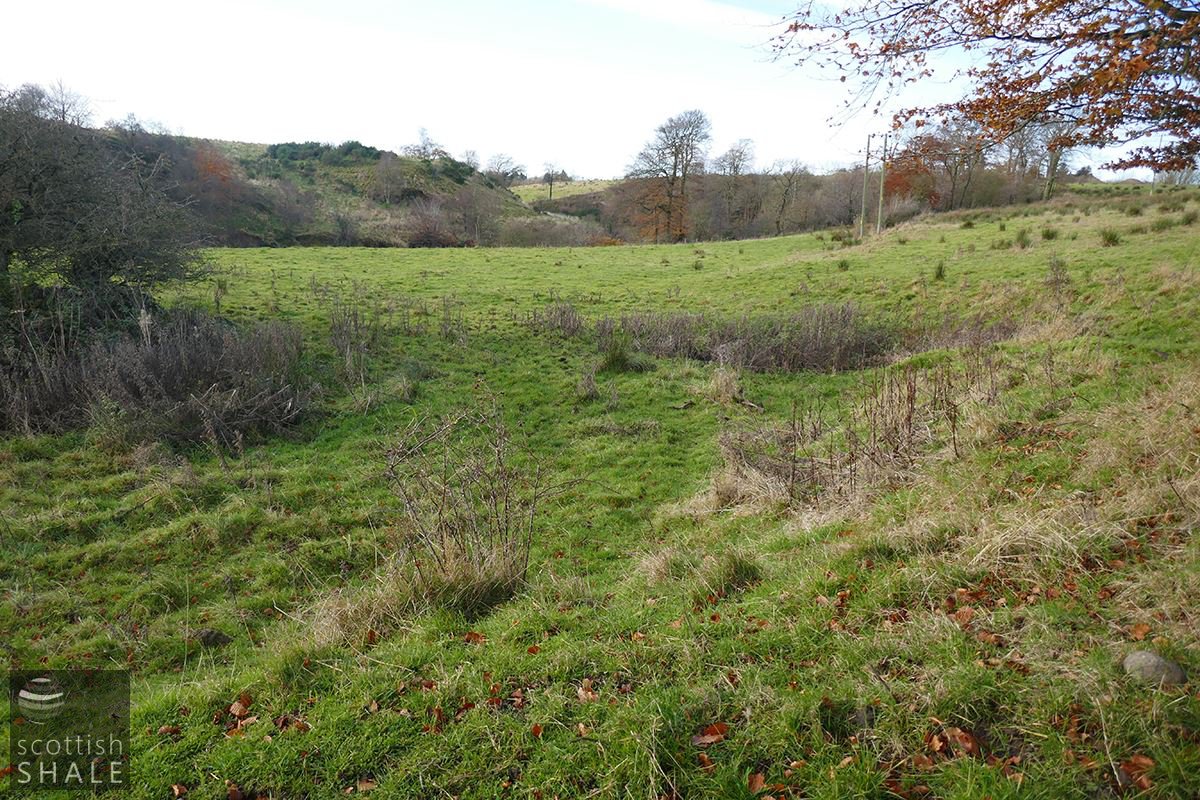 A view looking west (upstream) with the bushes on the extreme left marking the site of the mill buildings. The mill lade would have once cut across this scene. 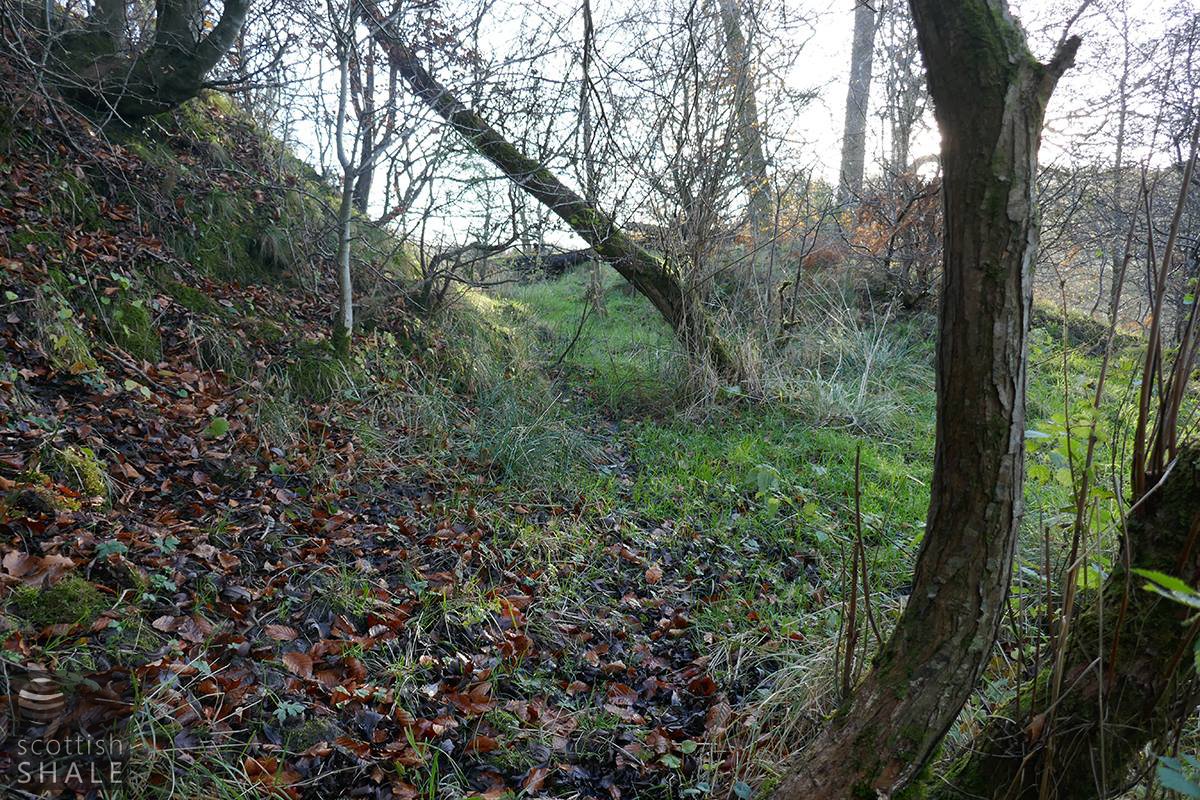 Surviving traces of the mill lade, close to the site of the weir. 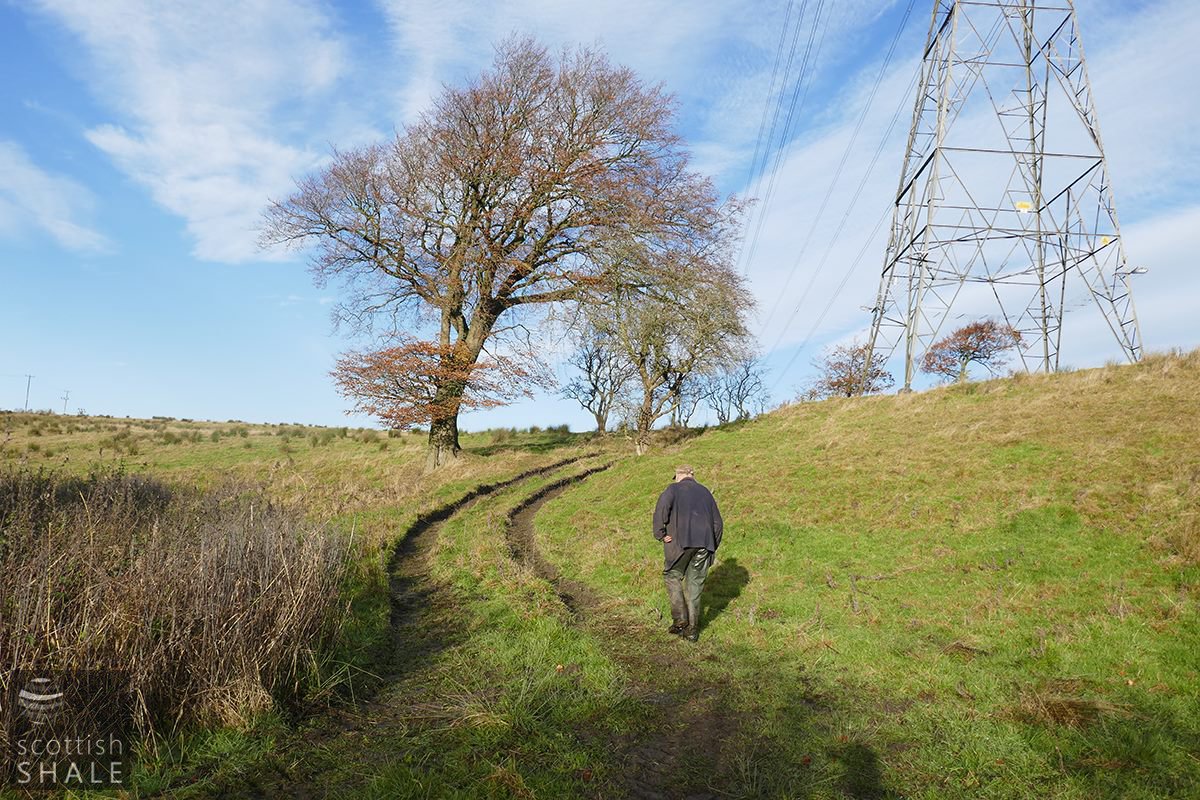 The trackway between the New Mill and the main road at Cuthill Farm, along which materials will have been brought to the mill, and finished boards dispatched by cart to bookbinders and stationers.