Banging Away on the Gala Braes

A rifle range in the Bathgate hills 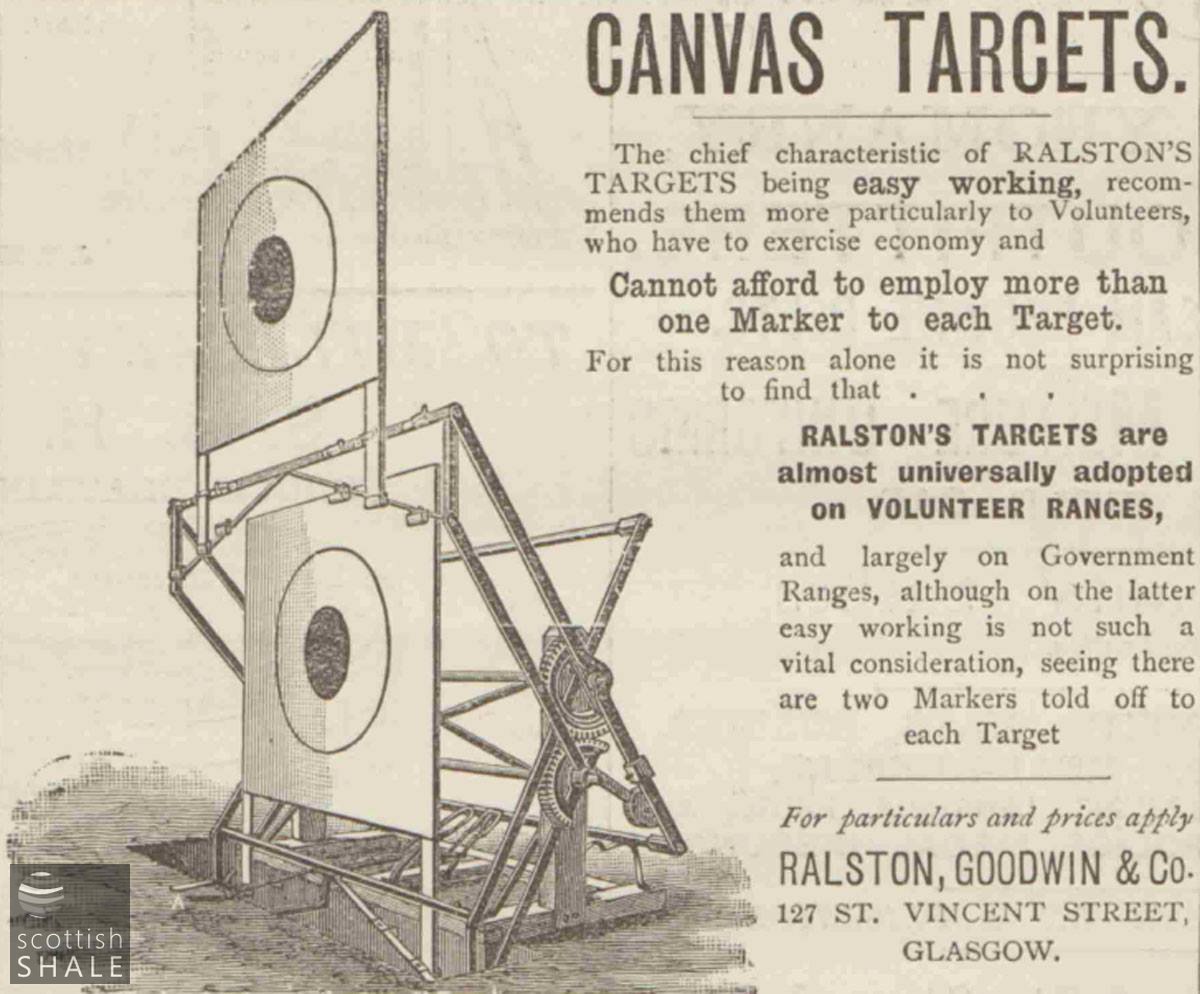 Canvas targets like this were set up a hundred yard intervals. 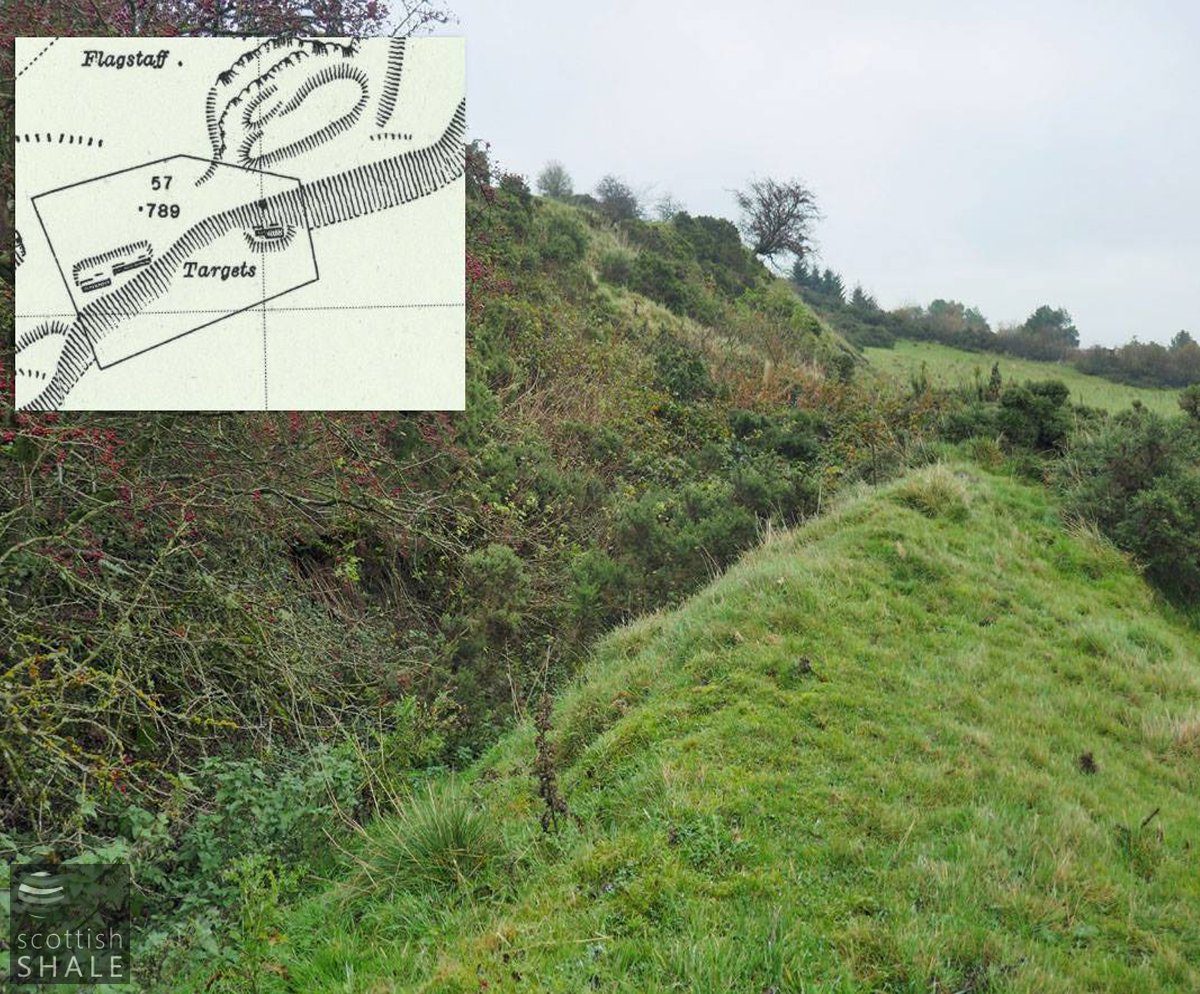 Site of short range targets at the limestone quarry.

The old limestone quarries south of The Knock enjoy a panoramic view east and south to the Pentland hills and westward to the Campsie Fells. The Gala Braes roll down from this elevated spot allowing a uninterrupted line of shot for over half a mile. Among patches of rushes and gorse you can still make out faint traces of the targets set up at hundred yard intervals down the slope, where Bathgate men once honed their shooting skills and competed for the honour of their club.

During the first half of the 19th century, limestone was quarried where is outcropped along the side of the Bathgate hills, leaving a long linear scar that remains clearly evident from the minor road between Bathgate and Silvermines. The northern progress of this quarrying activity was halted were the volcanic rocks of The Knock cut through the limestone seam. At this point the quarrying deepened and a limekiln and row of cottages were constructed. The area seems to have been known as Mounteerie, although this name has never appeared on Ordnance Survey maps. In 1846 it was noted that this quarry was nearly worked out. 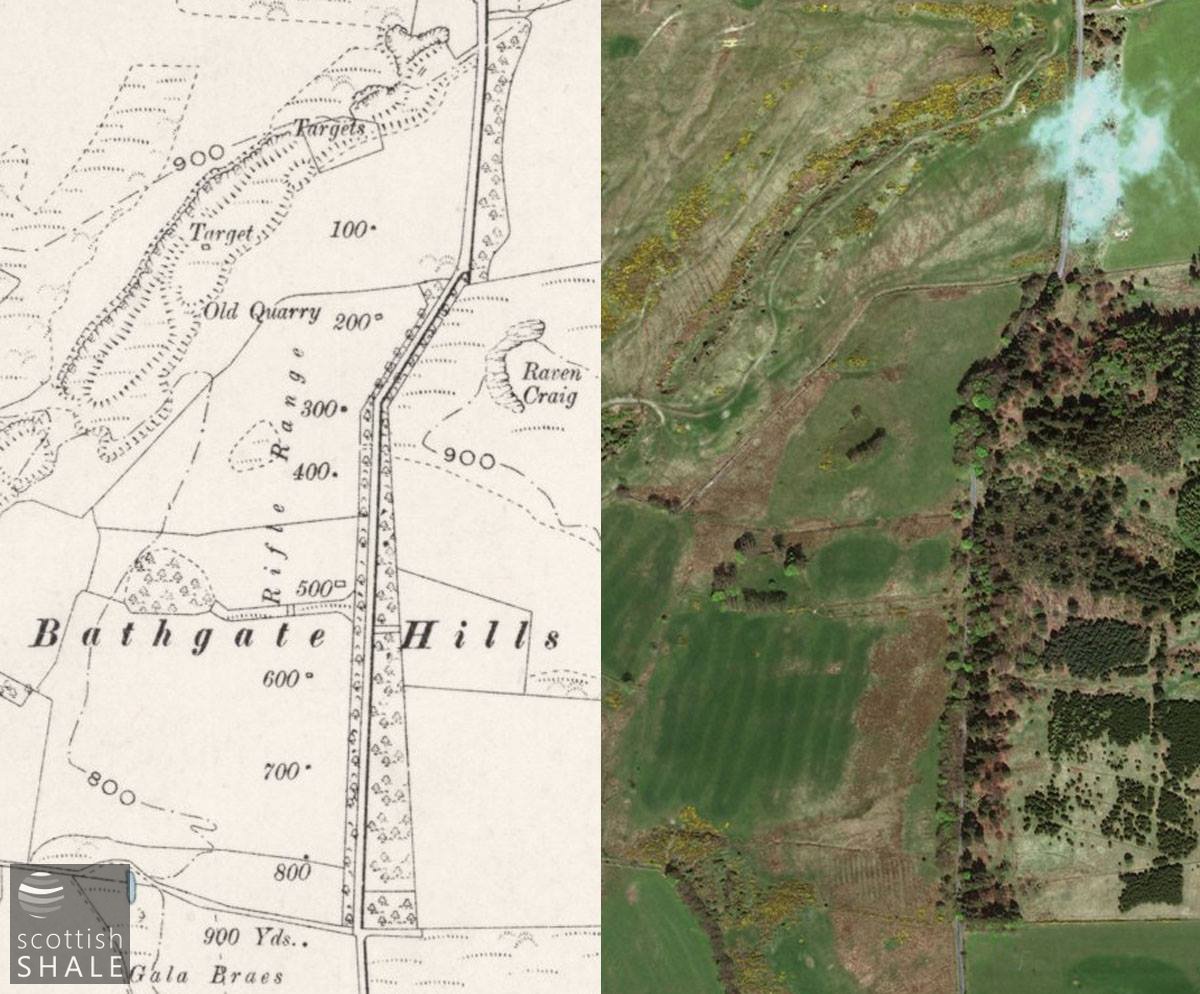 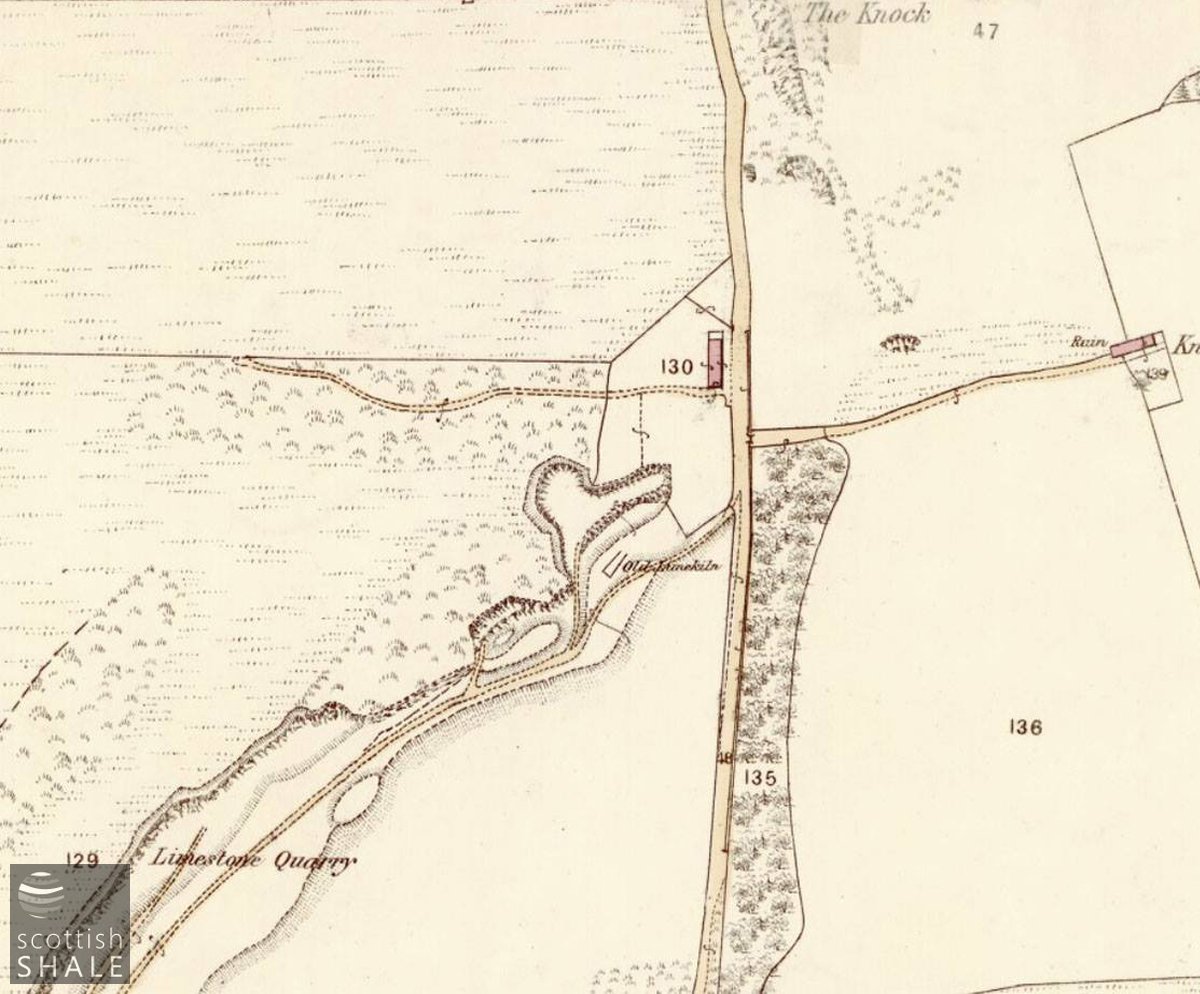 The Bathgate Volunteer Rifle Corps were formed in 1860, part of a national movement to create a part-time army of citizen soldiers in the aftermath of Crimean war. The great and the good of local society were quick to stand for election as officers of this great patriotic movement but as volunteers were initially required to buy their own uniform and equipment, few working folk could afford to play a part. Training in marksmanship and competitive shooting matches figured large in the life of the volunteers, and this action usually took place on the Gala Braes, just a mile and half north of Bathgate

The Mounteerie Long Range Rifle Club, was formed in 1892 and had their armoury in Gideon St, Bathgate. Membership cost four shillings a year and therefore affordable for most working folk. It was noted that “It is far better sport for a member to go up to the range and lie on the hills shooting than going to such amusements as whippet races and the like”. Many club members were also members of a new form of volunteer force, affiliated to regiments of the British army. 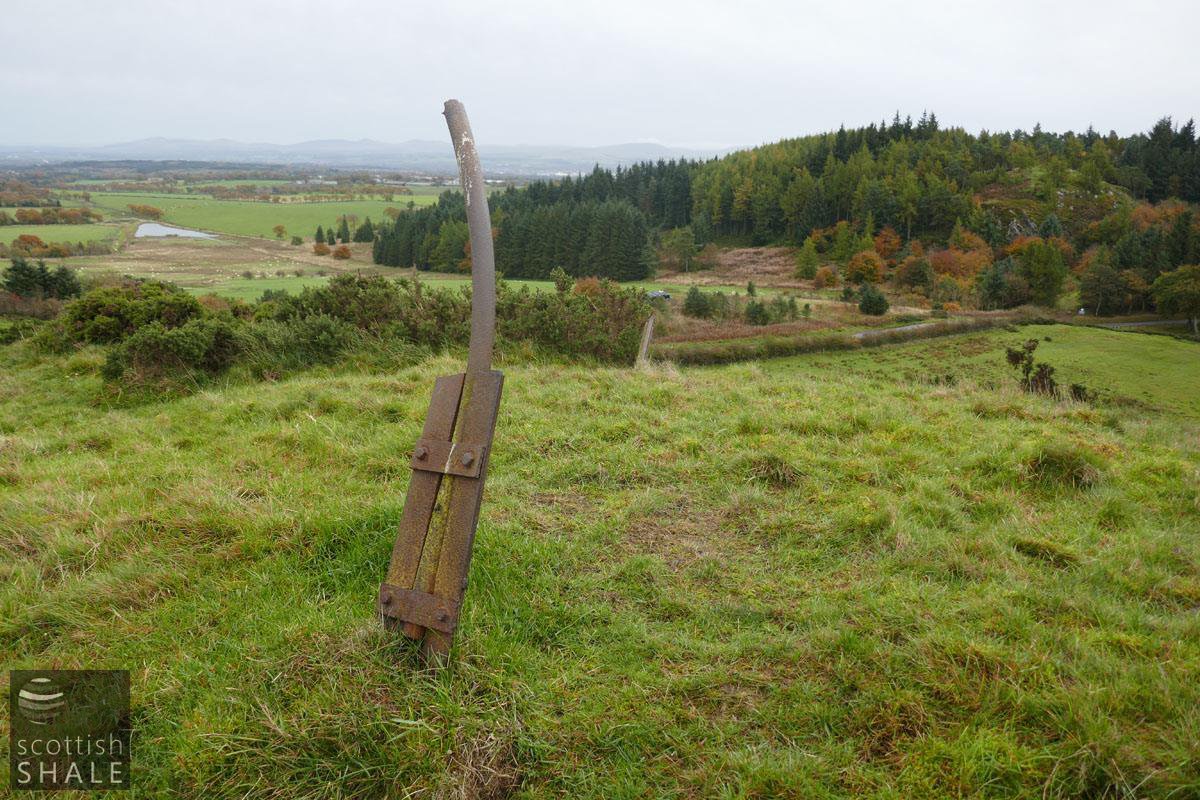 Remains of flag pole? presumably for flying the red flag to indicate that the rifle range was in use. Looking south toward Raven Craig, with the Pentlands on the horizon. 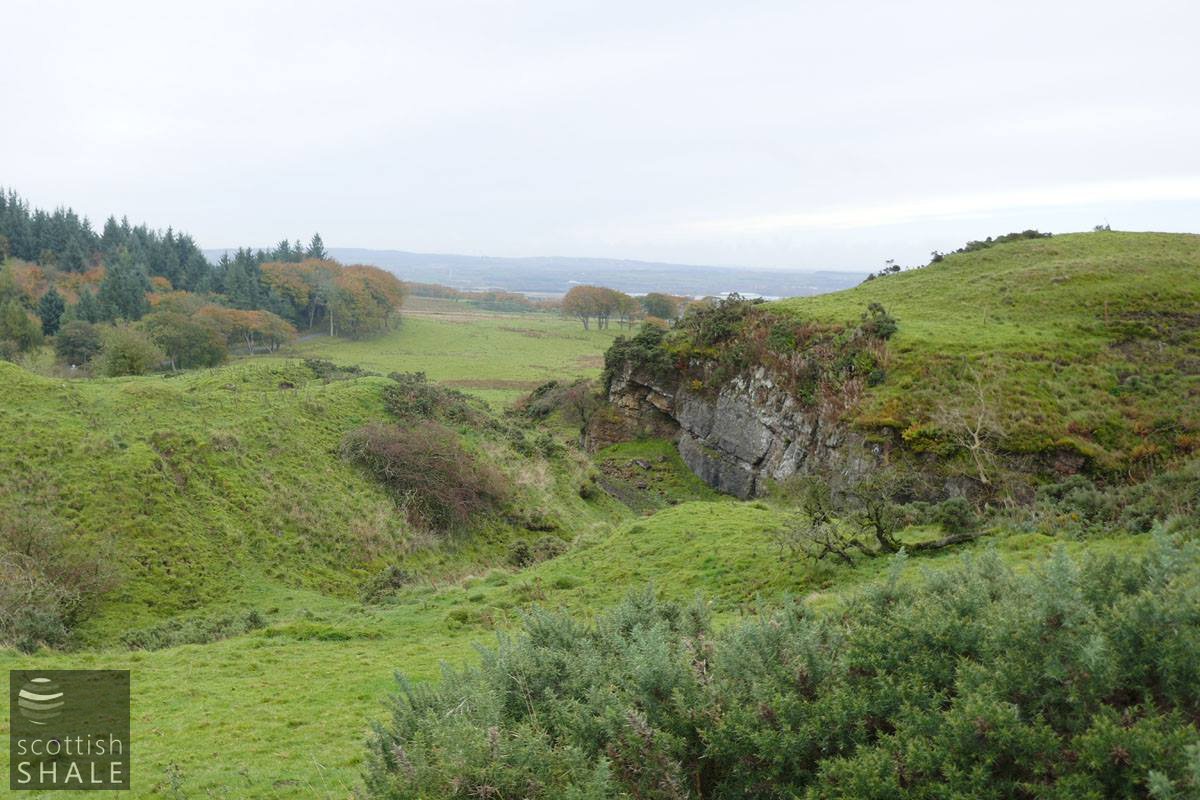 Limestone quarry, looking south across Gala Braes and along the course of the rifle range. 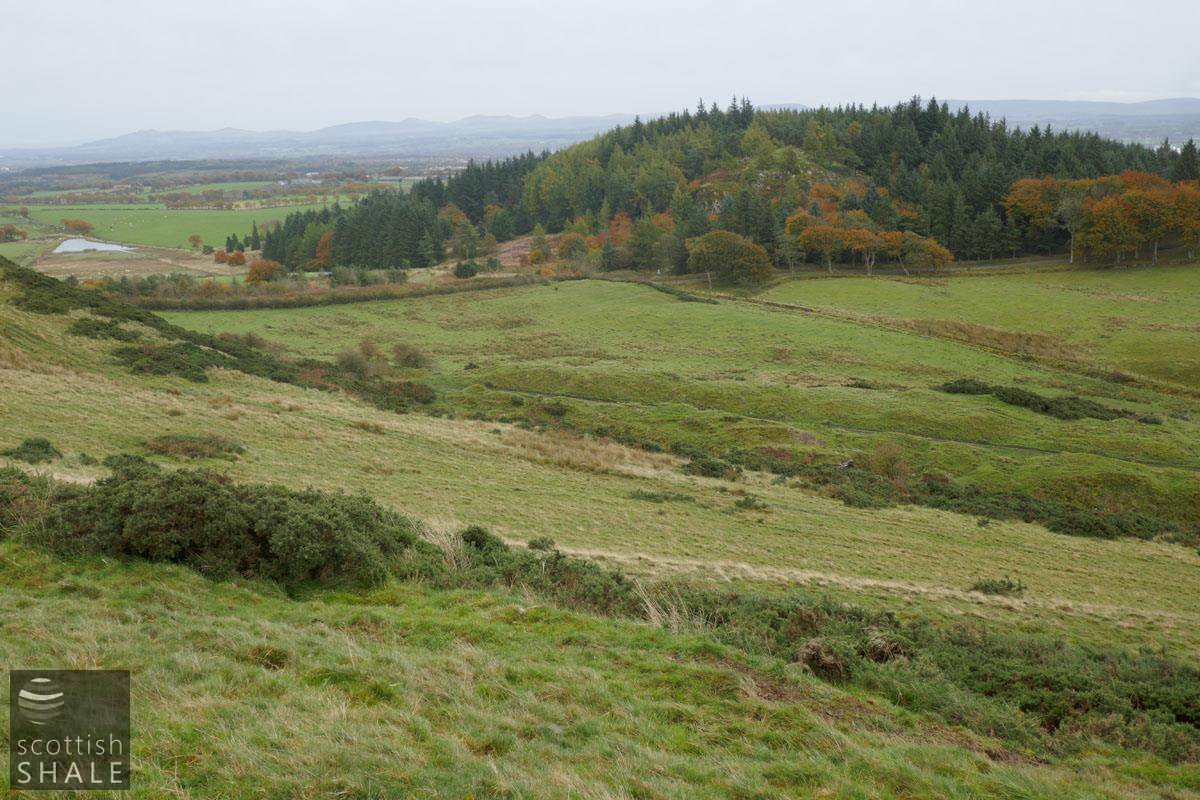 View south towards Raven Craig with line of limestone quarries running across the image, with site of rifle range beyond. 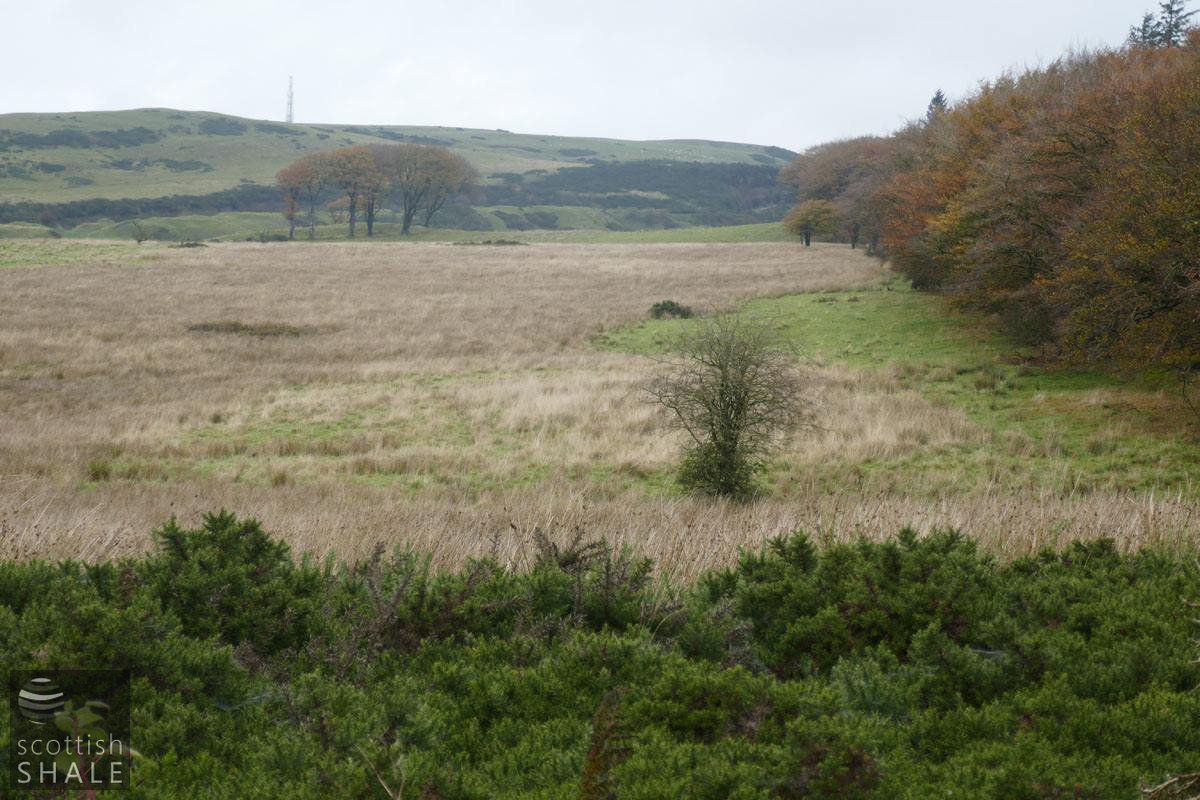 View from 800 yard target, looking back towards the firing point. Patches of gorse mark the site of other targets. 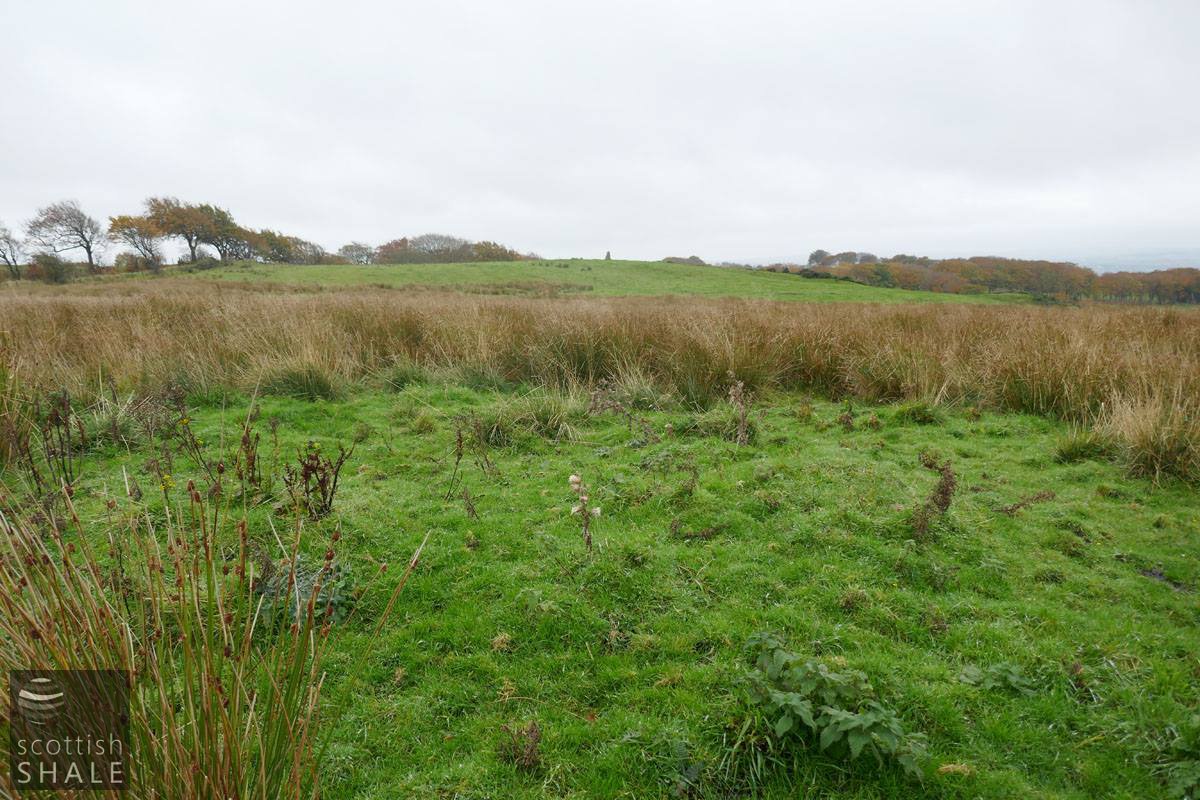 Lush grass on the site of the 900 yard target, looking south towards the prehistoric Galabraes stone 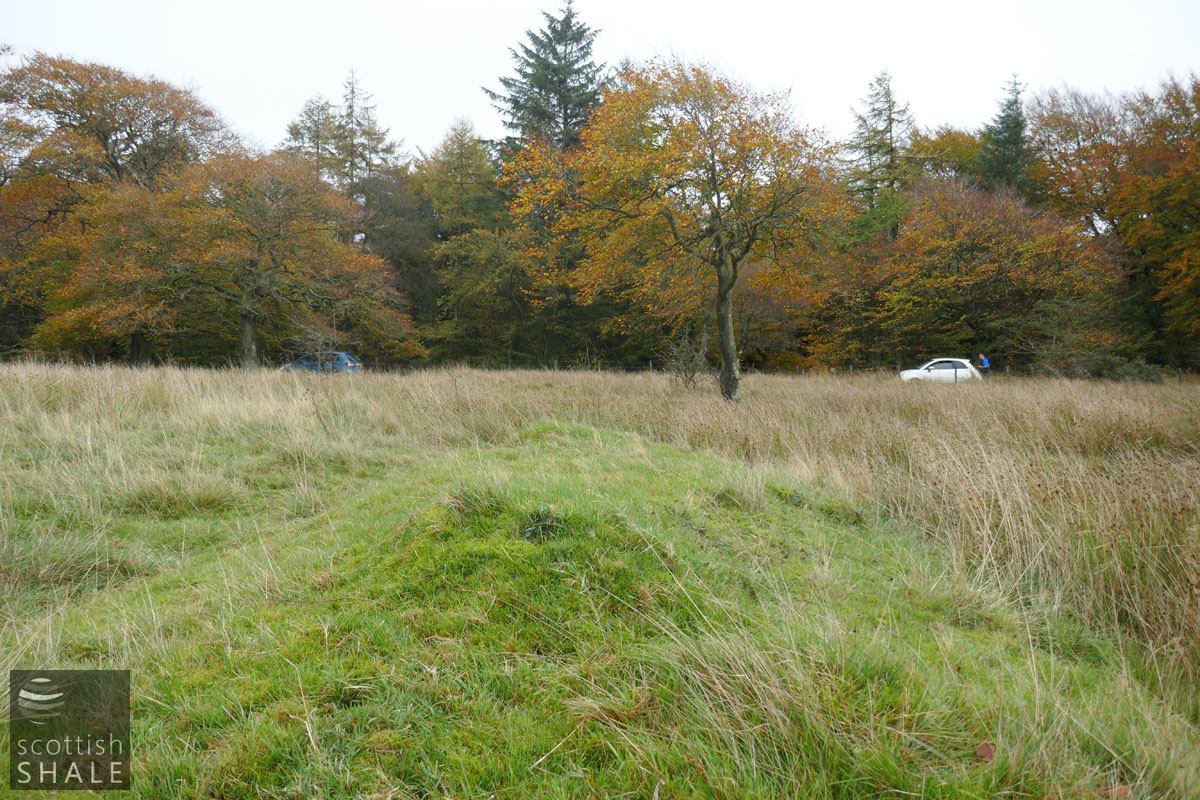 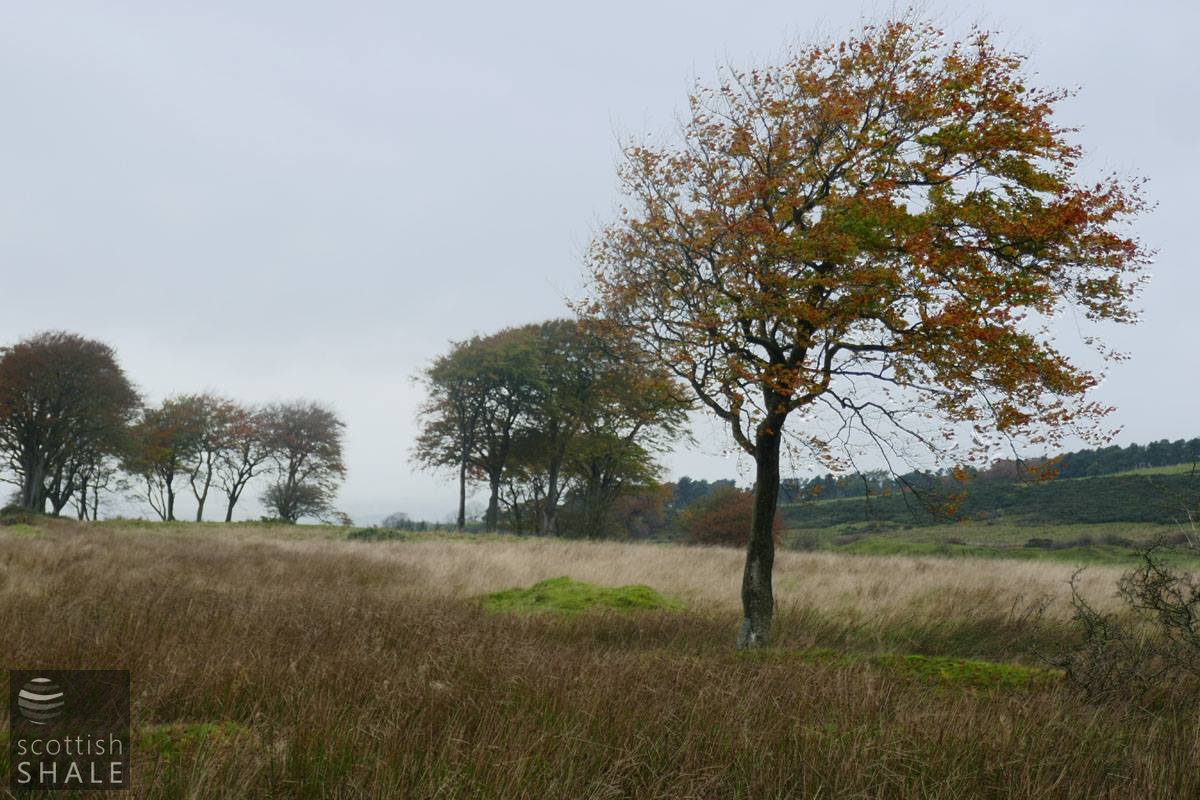 The green mound marks site of the 500 yard target, viewed from the road to the Knock and Silvermines.

The Mounteerie or Galabraes rifle range was used both by the club and the volunteers. The targets, probably large canvas panels set in steel frames, were set at hundred yard intervals, parallel to the road from Silvermines, enabling easy access for service. Matches over 800, 900 or 1,000 yards were regularly reported on in the local press; medals and cups were competed for, and crack shots became well-known local heroes. Use of the ranges intensified as the prospect of war loomed, but by 1917 it seemed that public attitudes to shooting as a sport were beginning to change. A newspaper correspondent noted that “peace-loving citizens who speeled the waterworks brae after dinner to commune with nature and get away from thoughts of war” were forcibly reminded of it by the “echoing sounds of rifle fire reverberating through those ancient hills”. Volunteer battalions were disbanded in 1922, and by 1925 it was noted that no rifle ranges remained active in West Lothian. It was said that post-war youth saw shooting from a different angle and that “golf and tennis are sufficient for them”. It seems likely that the range saw further use during world war two and some of the targets remained in place into the 1950's

Today it is hard to distinguish the shooting platforms and short distance targets from the earthworks of limestone quarrying. From aerial photographs, the location of most long range targets can be made out as patches of differing vegetation. On the ground it is more difficult to distinguish these Victorian marks on the landscape from a wealth of more ancient boundaries, tracks and building features.

On a misty autumn morning it is difficult to see full the thousand yards to the most distant target, and you can't help but wonder at the skill of the working men who devoted their spare time to marksmanship. 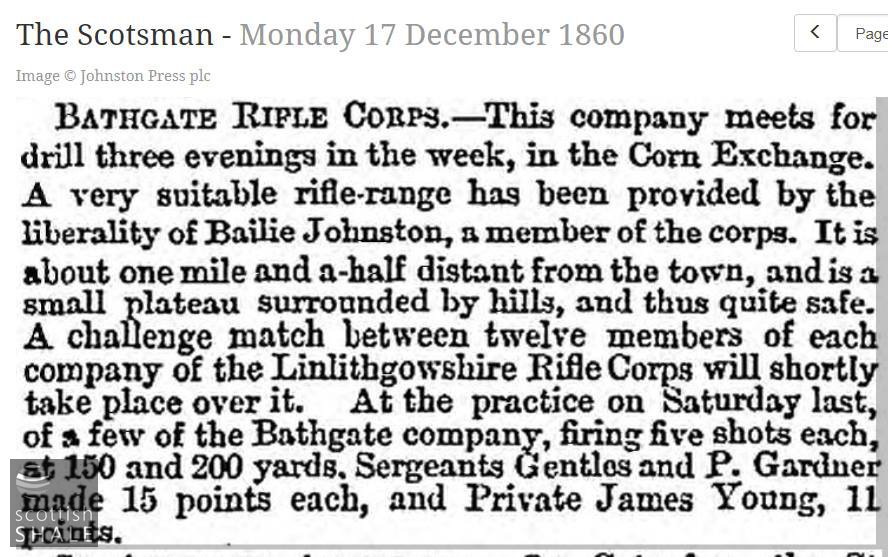 It is unclear whether this describes Gala Braes. 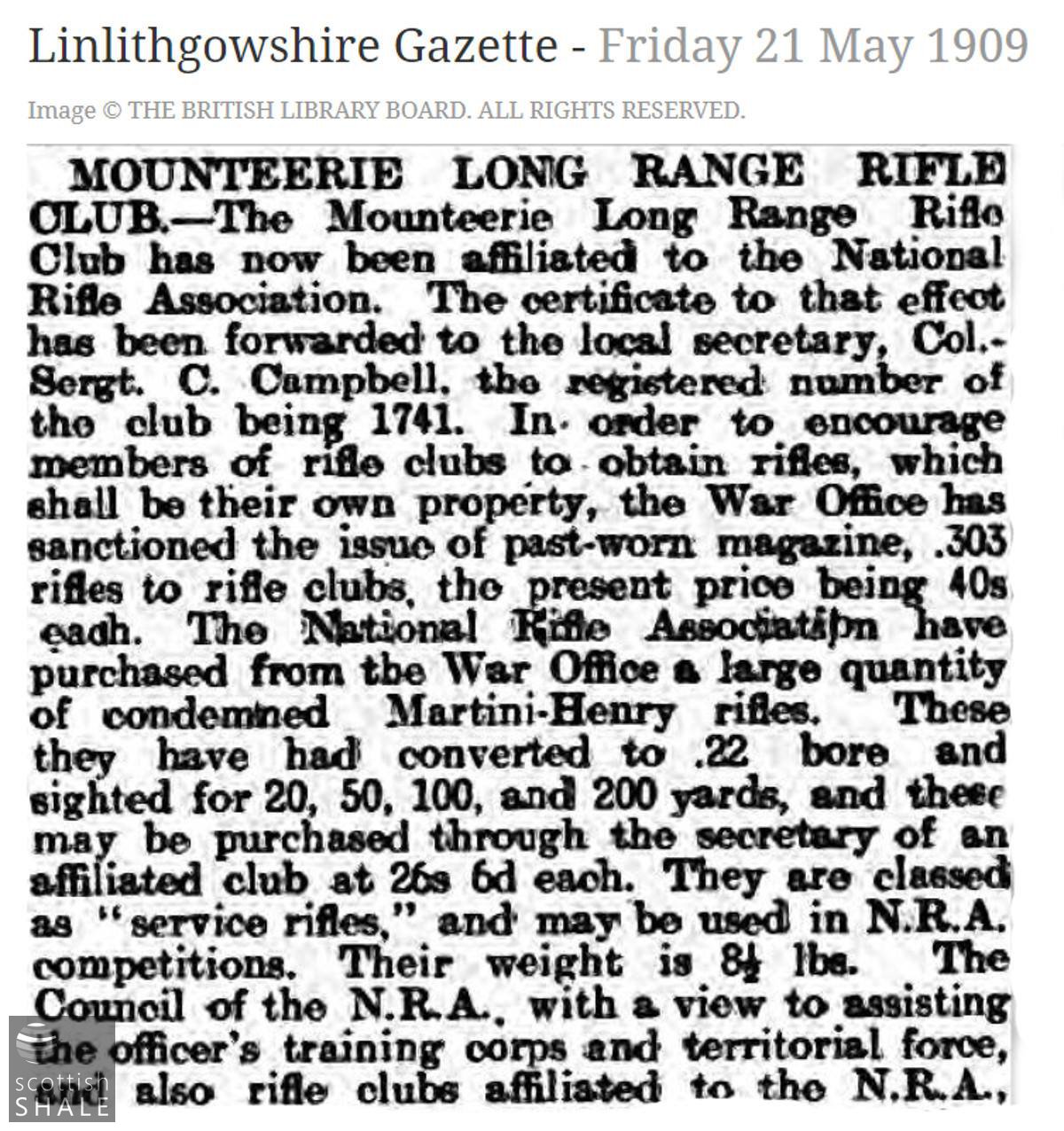 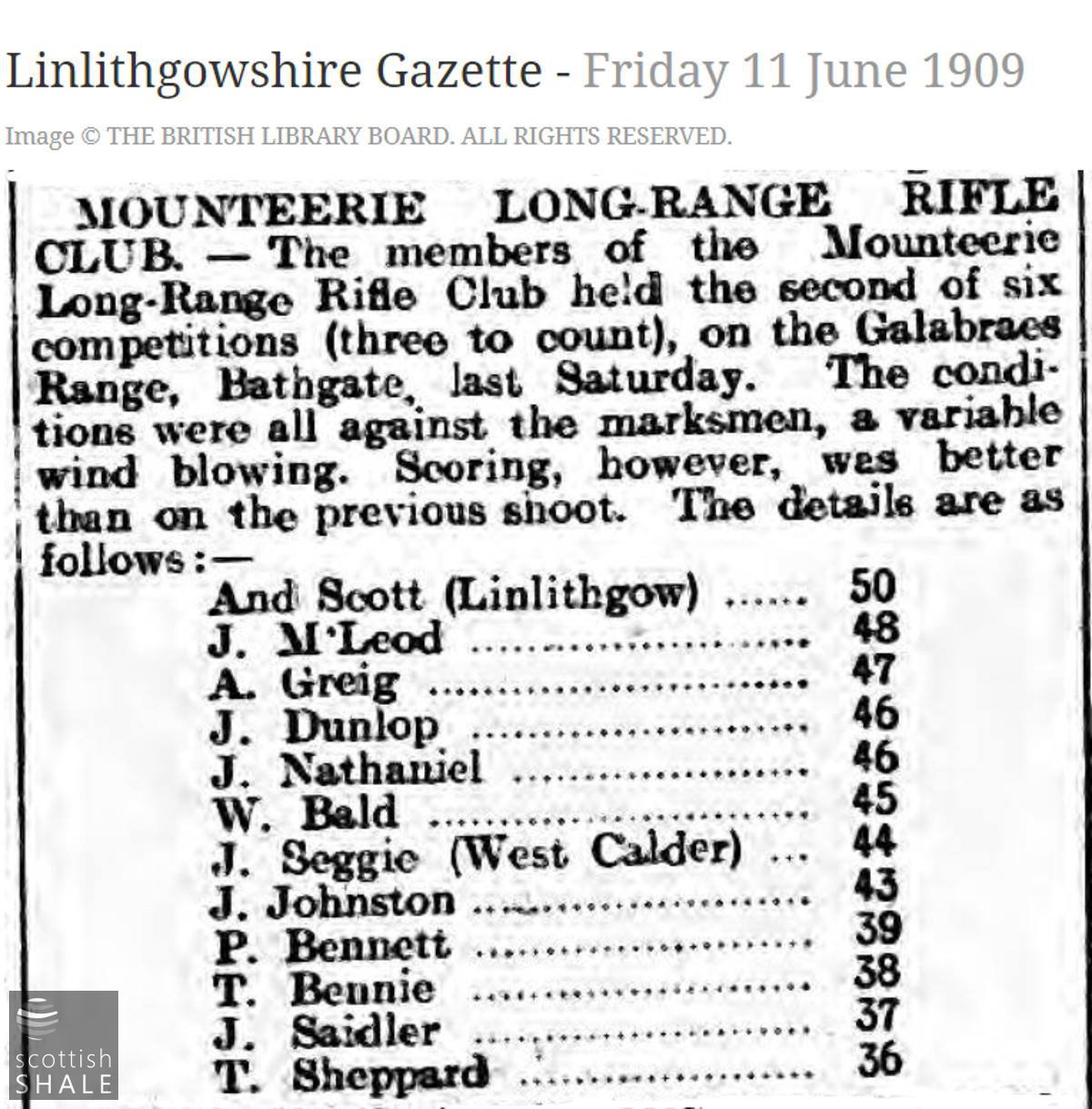 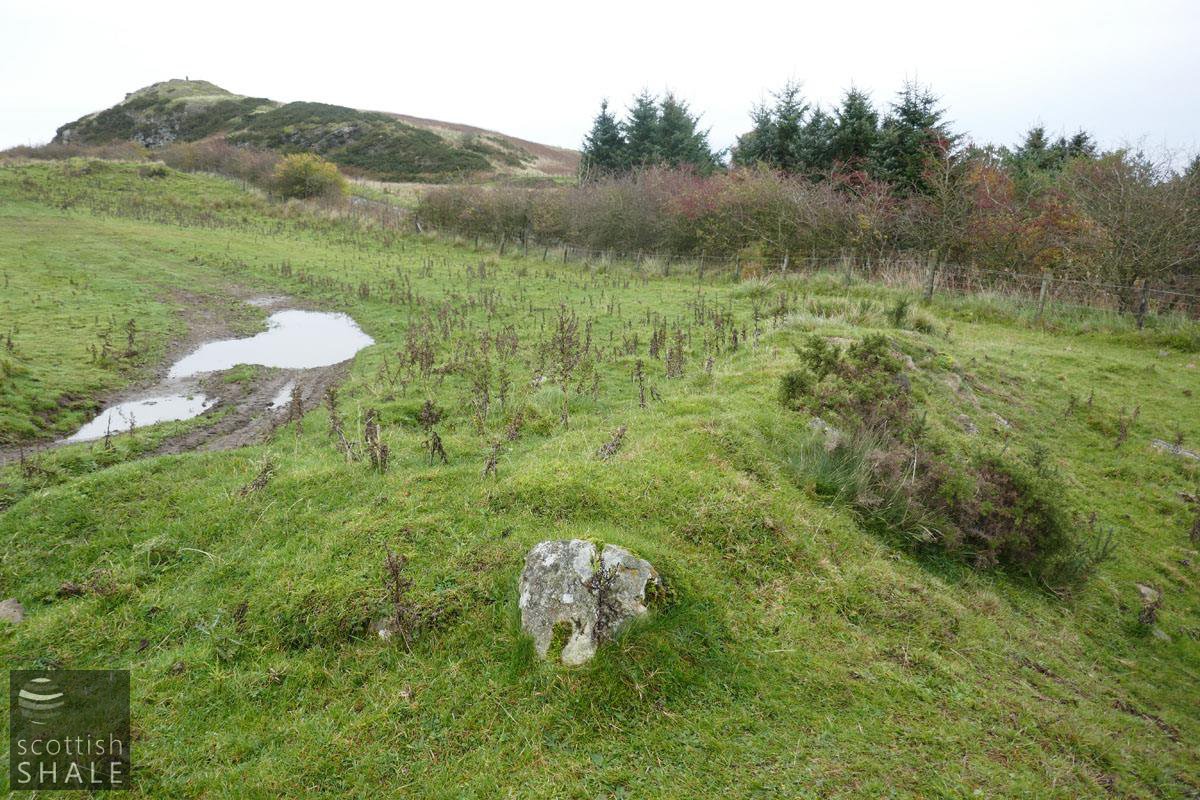 Foundations of the Mounteerie building, with The Knock in the distance. 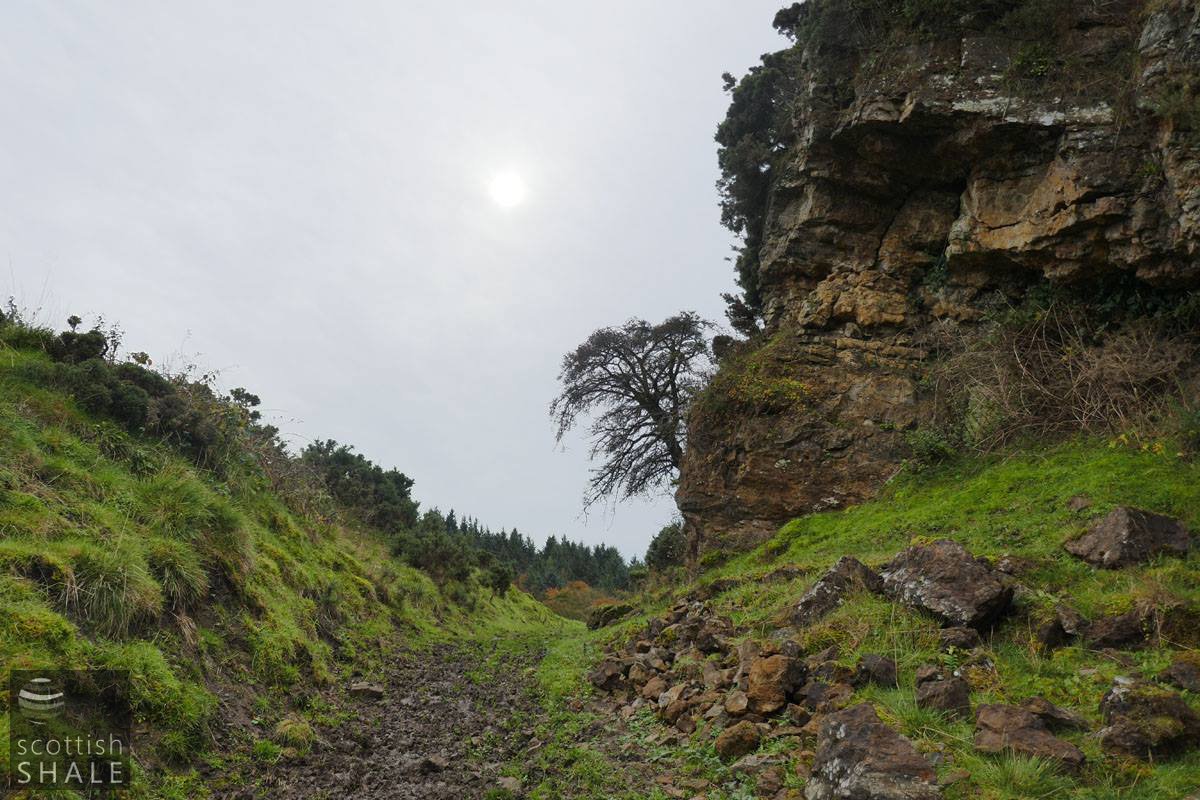 The entry to the Limestone quarry. 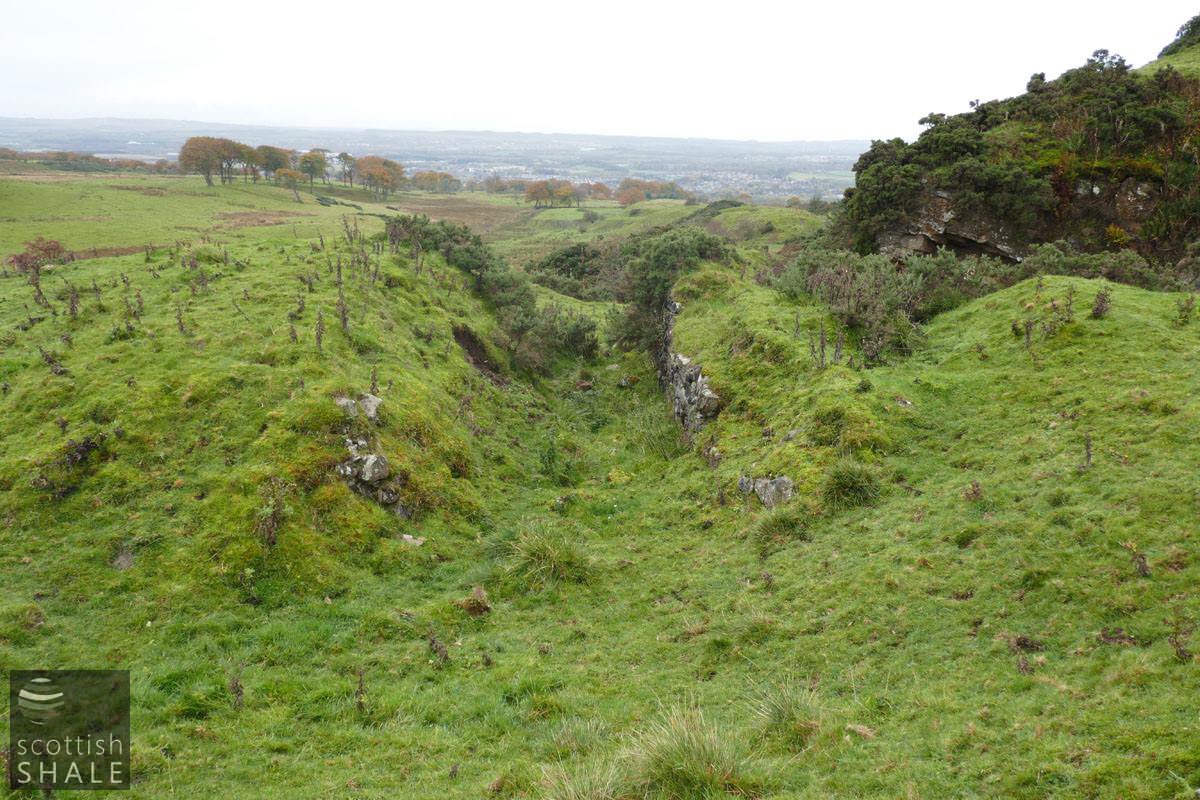 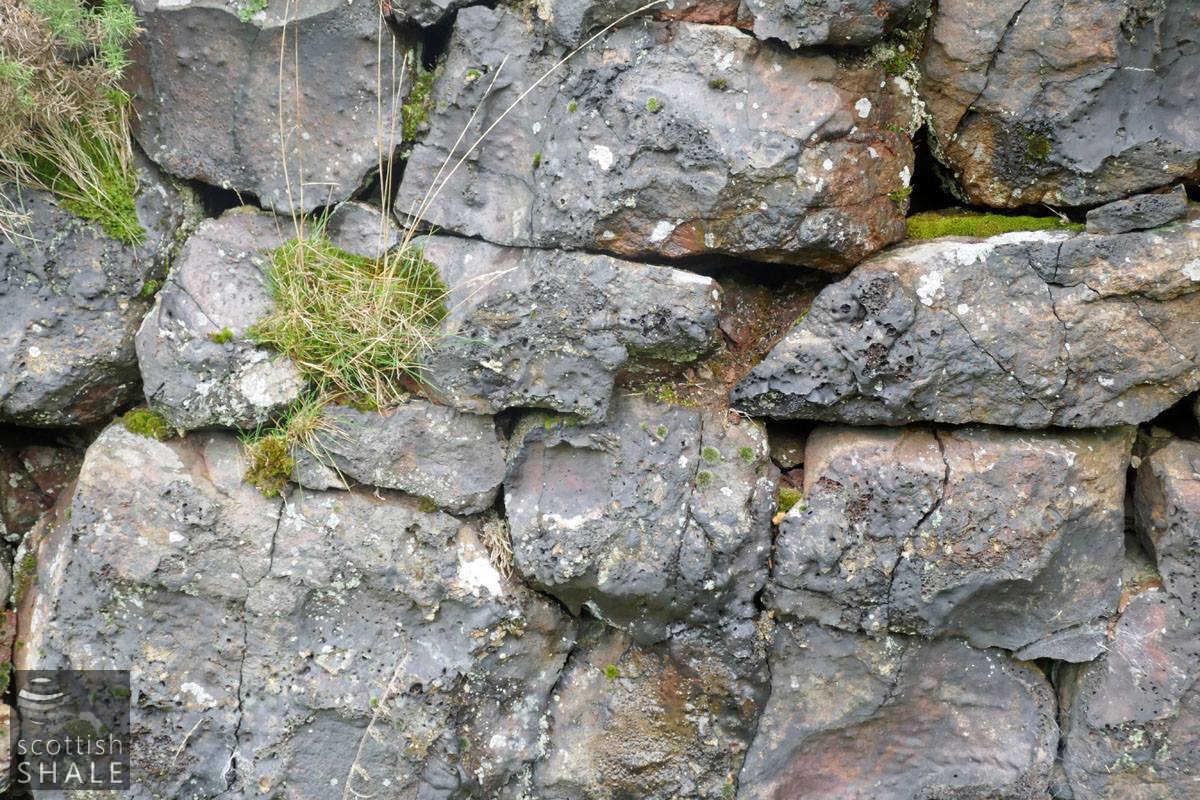 Vitrified stones within the ruin of the lime kiln.