Beyond the Garden Wall

The great fire or Torbanehill, part one. 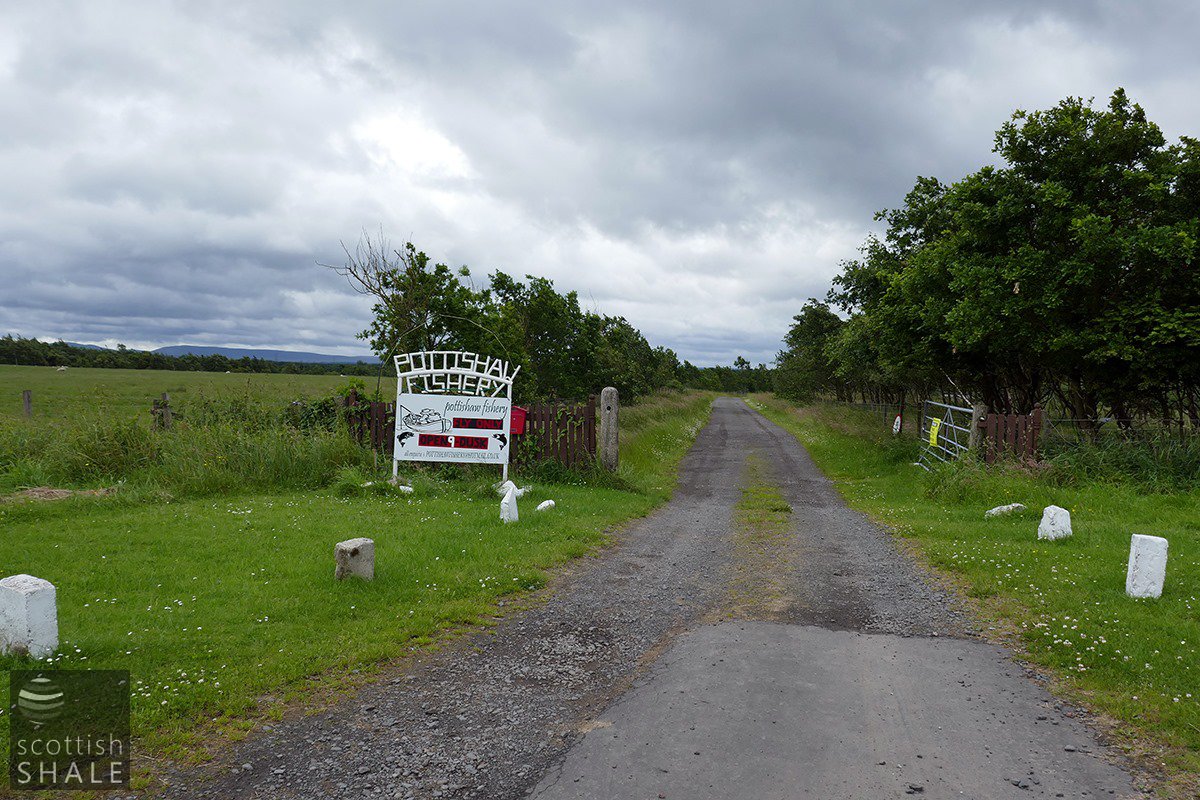 The area to the south of the old A8 was opencasted during the mid 1990's, creating the pond of the Pottishaw fishery. Torbanehill House would have been located in the centre of this image, part way along the hedge to the left of the roadway. 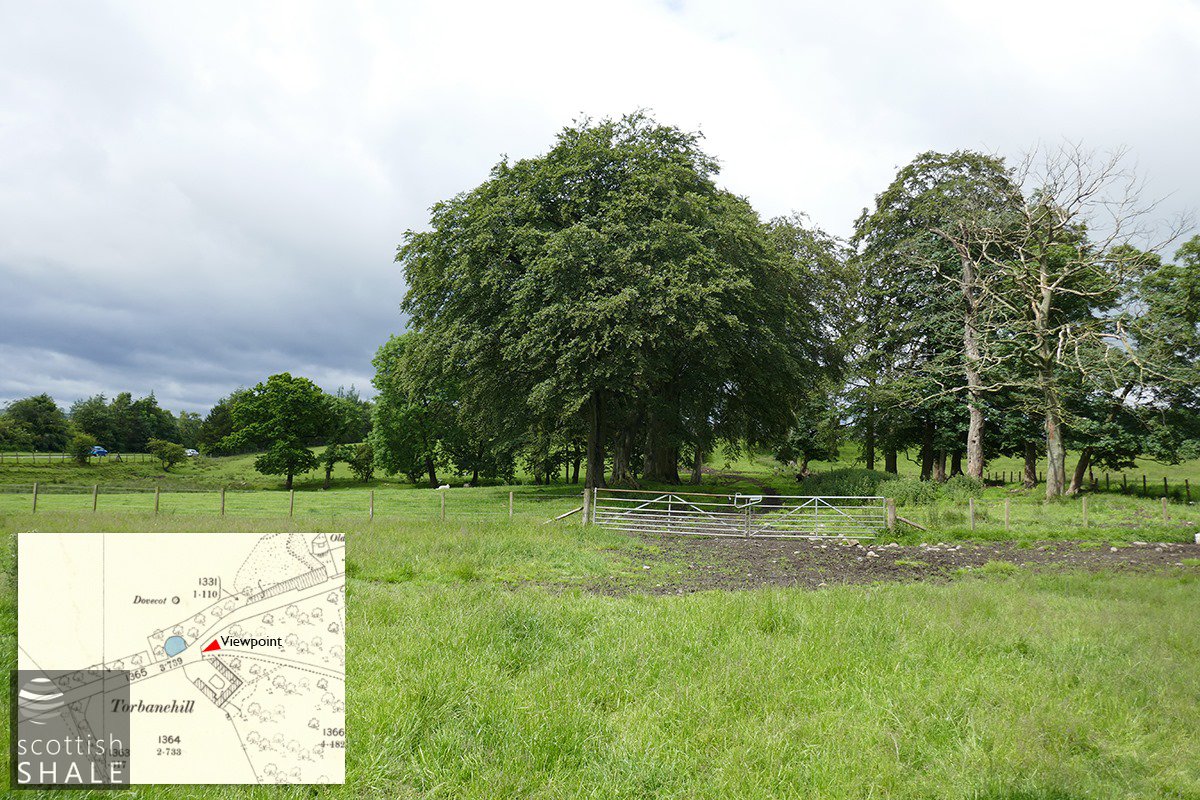 Most of the landscape of the Torbanehill estate has been radically changed by construction of the A8 during the late 1920's and by opencast working in the 1990's. This avenue of trees, looking west beyond the site of Torbanehill farm, is one of the few pockets of original landscape to have survived. 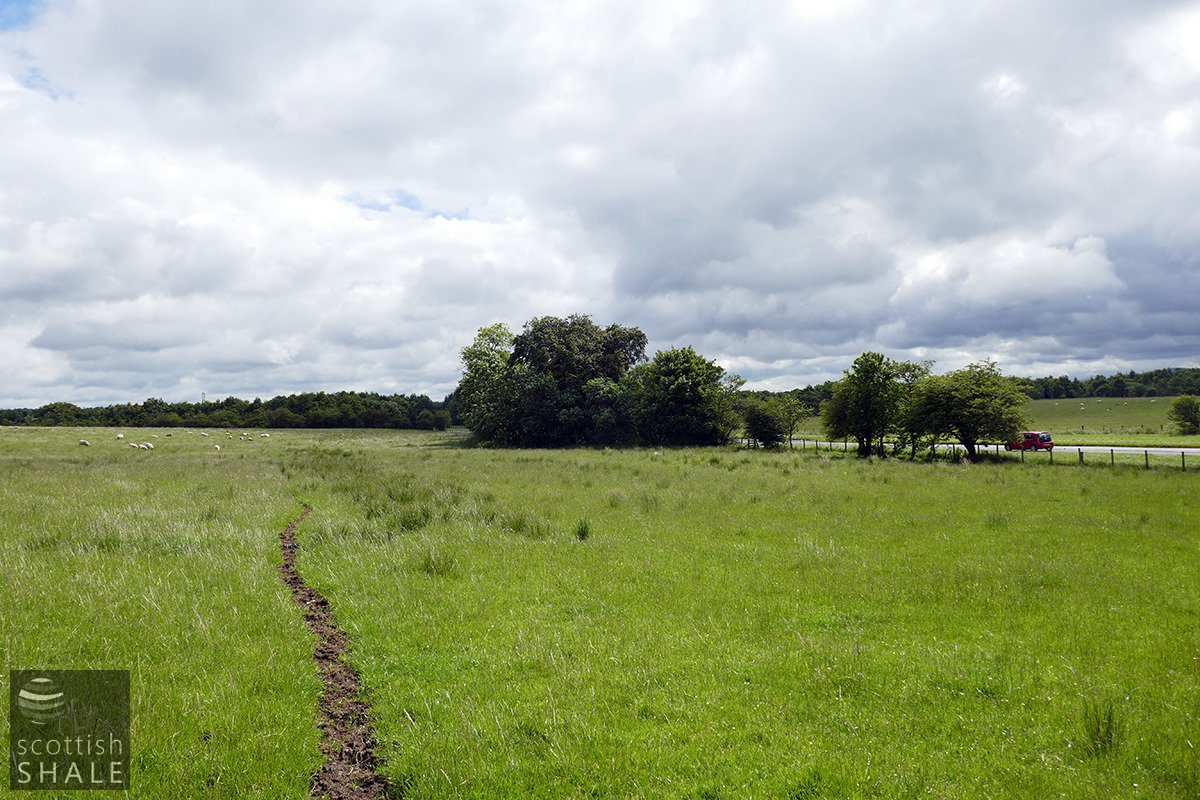 Site of the garden, obliterated by later development, looking east. The A706 (the old A8), runs through what was once the ornamental parkland of Torbanehill House, the sheep track approximately follows the course of the old estate road. 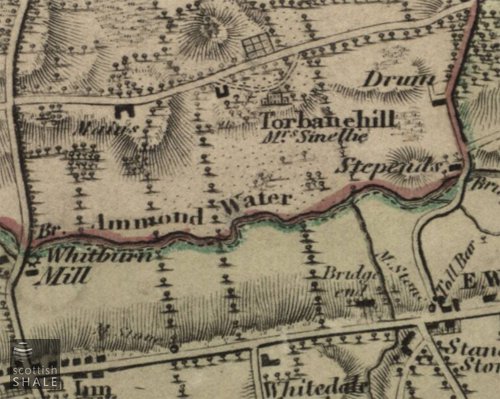 Very few gardens in West Lothian can have been scrutinised by the House of Lords in as much detail as the small walled orchard and vegetable plot that was once attached to Torbanehill House. Arguments about the layout, cultivation and history of the garden took place as part of the final chapter of a ten-year series of bitter and very public legal battles relating to the oil-rich coal that lay beneath the Torbanehill estate.

Torbanehill house was built in about 1779, at a time when many prosperous merchants, and the elite of enlightenment Edinburgh, were constructing countryside homes in the Lothians. It was described as a “neat plain mansion, two storeys high and slated” with six bedrooms, dining and drawing rooms, a parlour, and servant’s quarters. From its windows, “an extensive prospect” of parkland and pasture sloped gently down to the River Almond, with views beyond to the great turnpike road passing between Whitburn and East Whitburn. The mansion was discretely served from the rear by a private road and driveways, with farm buildings and offices at a distance among ornamental trees, and a walled kitchen garden set on a south-facing slope sheltered in the lee of a hill. Plans show the garden wall forming a semi-circular enclosure, divided internally into four large beds, with a pathway around the outside of the wall set within trees and shrubs.

Among the earliest owners of Torbanehill House were James Wardrop and his family, part of a dynasty of prominent Scottish surgeons. The estate changed hands several times, and on each occasion advertisements made mention of the garden. In 1812 it was stated that “the garden, containing an acre of ground, is surrounded by a stone wall, and is well furnished with good fruit trees in full bearing” ; in 1826, “enclosed with a wall…..well stocked with large and small fruit”, and in 1829 “an excellent walled garden and shubbery”.

It was probably in about 1829 that the estate was purchased by Sir Richard Honyman, at one time MP for Orkney. When Sir Richard died in 1842, the property passed to his widow, although her son-in-law William Gillespie increasingly took charge of the estate. William, who assumed the surname Honyman-Gillespie, seems to have been an odd character. An author of theological tracts such as “the origins of evil” and “the necessary existence of God”, he was once described as a “plain simple-hearted gentleman… in his manner shy and somewhat embarrassed”. Yet in his dealings over mineral rights he became obsessive to an extent that his actions might be considered spiteful or vindictive.

Back in the 1780’s it was stated that there was “a certainty of coal” in the lands of Torbanehill, and later trial bores sunk in Sir William’s day revealed seams of “parrot and split coal at moderate depth”. Little mining took place however until 1850, when Gillespie leased the minerals of Torbanehill estate to the Falkirk coalmasters James Russel and Son for a period of twenty-five years. What Russel probably knew at that time, and Gillespie did not, was that a narrow seam of extraordinarily rich cannel coal existed beneath much of the estate. This “Boghead coal” quickly found a ready market at gas works throughout Britain, and was the reason why James Young chose to construct his oil works at nearby Inchcross. As huge sums of money began to be earned from mining the limited reserves of Boghead Coal, Gillespie sought a larger share of the spoils. His initial argument was that the mineral was not coal at all, but instead a completely new class of mineral (“Torbanite”) which consequently was not covered by Russel’s contract. The argument went all the way to the House of Lords, with scientific opinion testifying on both side. Eventually the Law Lords chose not to make judgement in the case considering the argument was a matter of geology, not of the law. This must have come a great relief to James Young, whose patent to produce oil applied only to minerals classed as coals. 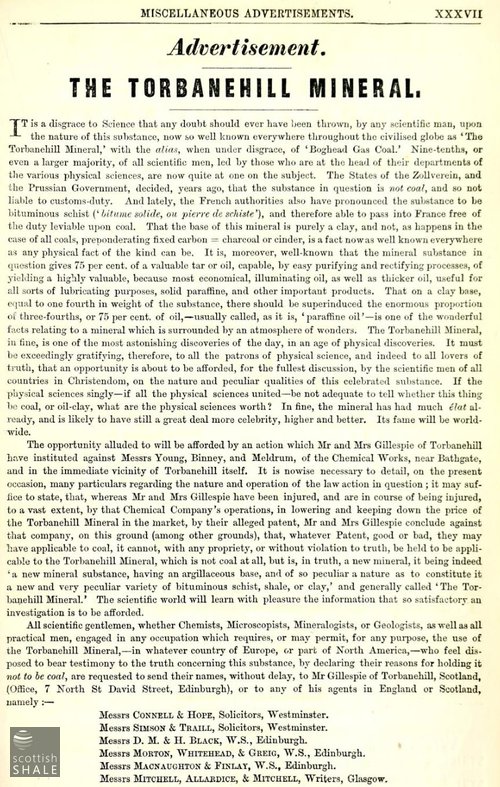 Gillespie subsequently started new action against Russel & Son on grounds of “fraud, concealment, and misrepresentation” when signing the original contract. The case seemed destined again to go to the highest court in the land, until Russel & Son voluntarily increased the royalties paid to Gillespie. Presumably they considered that their best interest lay in working the remaining reserves of Boghead coal as quickly as possible then terminating the troublesome contract. As supplies of Boghead coal became scarcer, its value continued to rise.

The mining lease signed with Russel & Son in 1850, sensibly excluded the areas of land beneath Torbanehill house, the estate farm buildings, and the area of the garden, in order to avoid risk of subsidence. Interpretation of the measurements detailed in the contract sparked further legal action which, in 1871, was again escalated to the House of Lords. In trying to establish where the effective boundary of the garden lay (and consequently the limit of mineral workings) various old gardeners were brought before the Lords to testify how the garden had been worked in previous years. The arguments hinged on whether the garden wall marked the boundary of the garden, or whether the boundary should be defined by the limit of the “slips”, a strip of cultivated land, that lay another 20 or 30 yards beyond the wall.

The case was put that, when the garden was first laid out late in the 18th century, it followed a “not uncommon plan devised in Scotland by a gentleman of the name of Nichol” in which fruit trees would be planted on both sides of a garden wall, then “made somewhat ornamental with flowers”. A gravel path ran around the outside of the wall and beyond this there was a hedge that provided shelter and “prevented cattle from entering into this enclosure”. This description closely matched the layout of the Gillespie’s garden shown on the Ordnance Survey map published in 1856

The testimony of old gardeners however, showed that this had not always been the case. John Orr, who started work there in 1846, testified that at that time, there was “nothing but trees and grass outside the garden wall”. The area outside the wall was known as “the orchard”, but there were no fruit trees there. Other testimony confirmed that in 1850, when the mineral contract was signed, the garden was in a “rude and uncultivated state” with no more than a “few trifling standard fruit trees”.

It was ruled that the garden wall served as the effective boundary of the garden, seemingly acknowledging that the strip outside the wall had been added by the Gillespies after the mineral contract had been signed.

By the time that the appeal ruling was made in 1871, it seems likely that the garden was once again in a sorry state, as Gillespie had instructed that the Boghead coal be mined from beneath the garden and all of the buildings on the estate. This was then mounded in huge heaps around the estate, the largest pile being within the walls of the garden.

By June 1872, this pile was 30ft high and contained almost 17,000 tons of highly inflammable Boghead coal. It had recently been sold, and was generously insured – What could possibly go wrong?

Above right: Torbanehill house and its "extensive prospect" south to the Almond, and its garden to the north. From Forest's map of the Lothians, published 1819, courtesy National Library of Scotland.

Above left: Typical of the many advertisements, pamphlets and letters to the editors issued by William Gillespie during the string of court cases. Courtesy National Library of Scotland 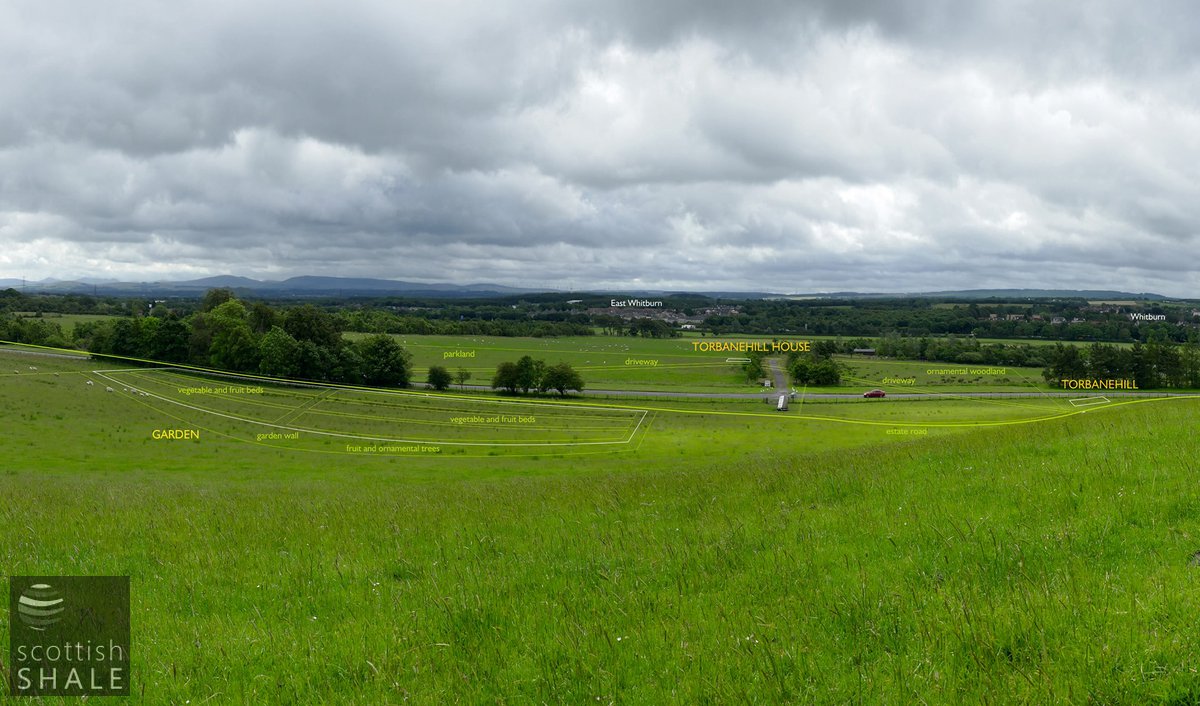 The layout of the garden, as detailed on the 1856 OS map, superimposed on a panoramic view of the scene today. 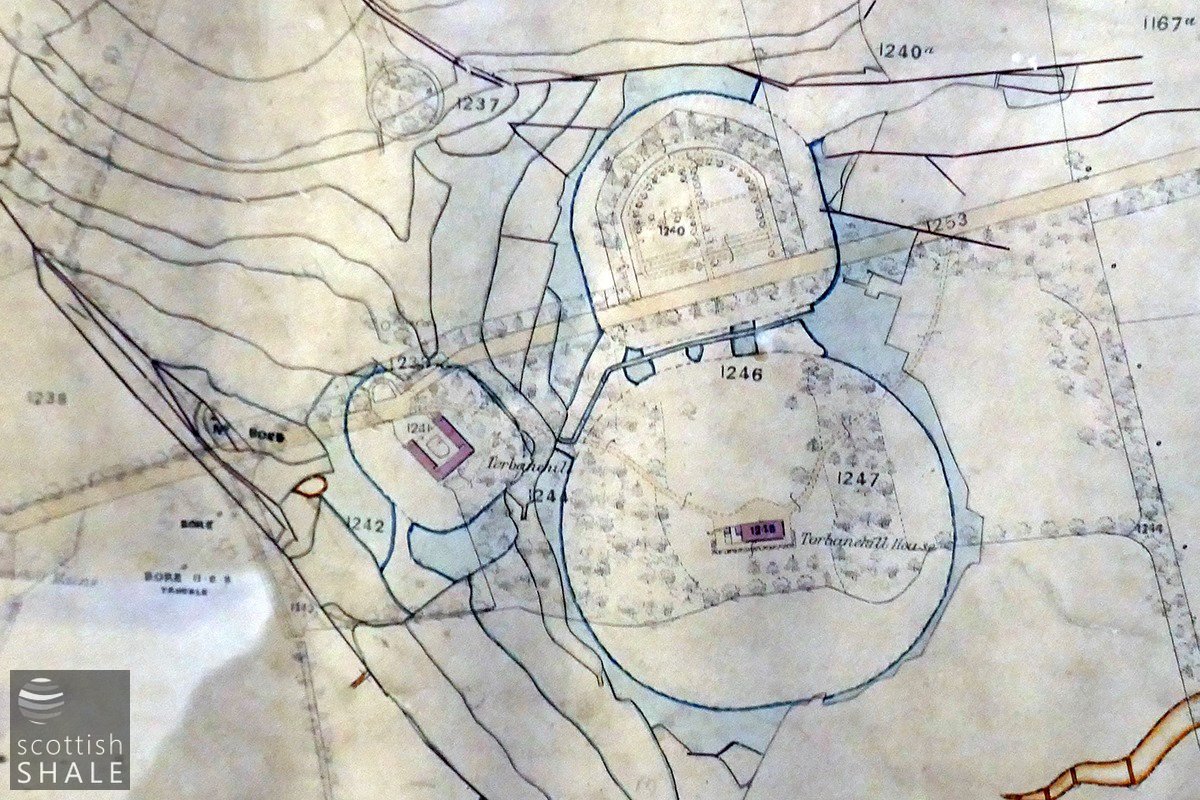 25" OS map, 1856 edition, marked up to show the extent of Russel and Son's workings of the Boghead coal. The exclusion zones around the farm, house and garden are clearly shown. Almond Valley collection. 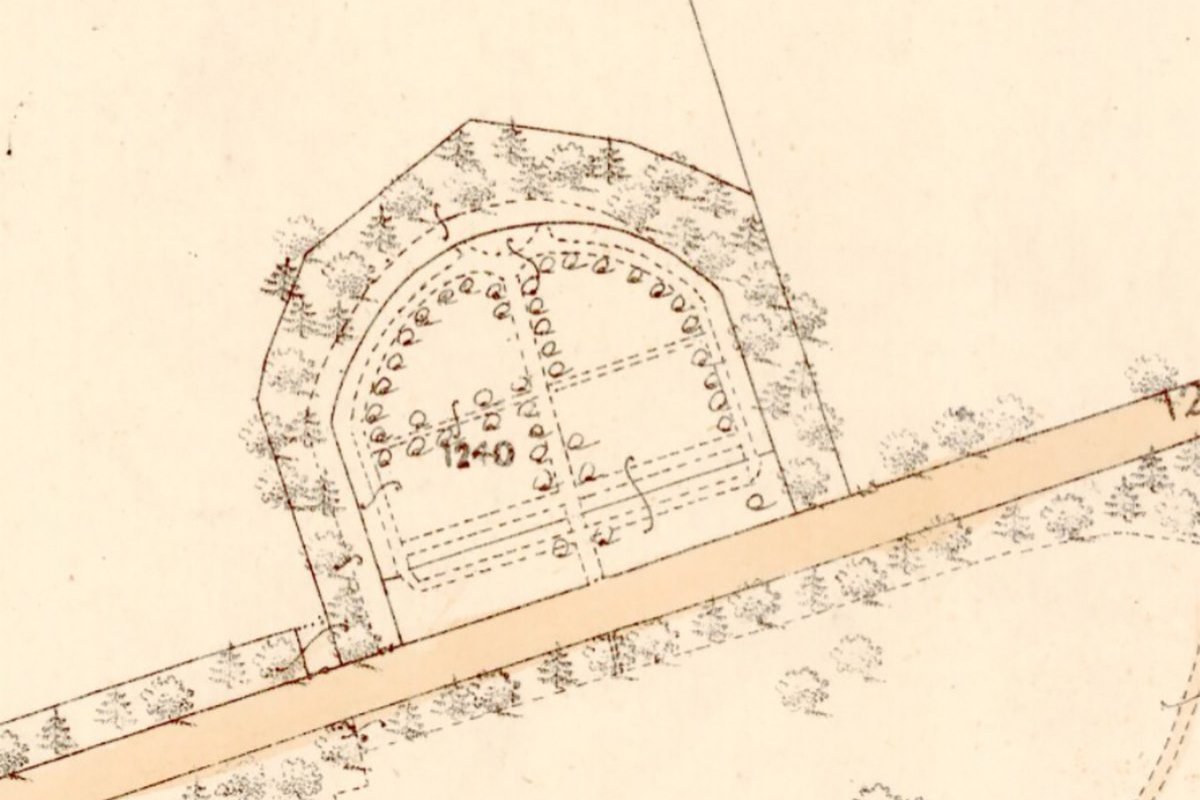 Detail of the garden area, show on the 25" OS map published 1856. Courtesy National Library of Scotland. 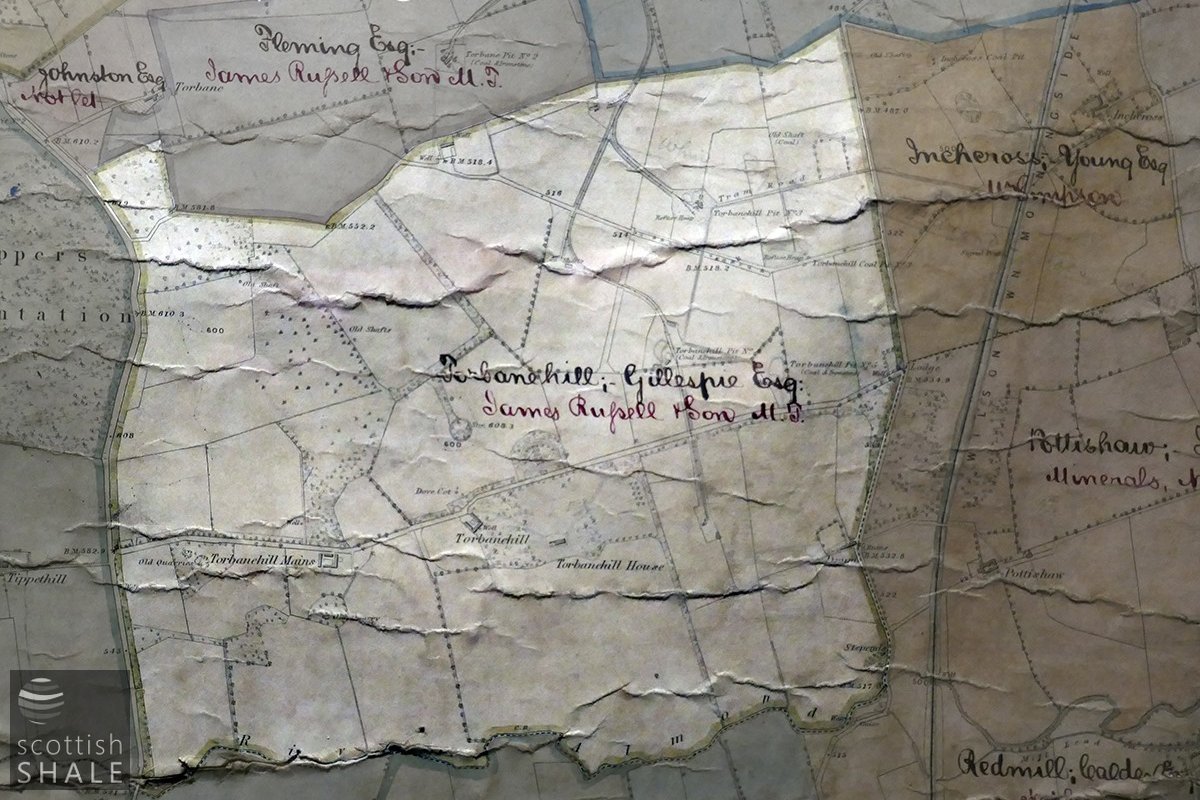 Extent of the Torbanehill estate, as shown on one of a number of maps in our collection indicating the extent and ownership of mineral leases.