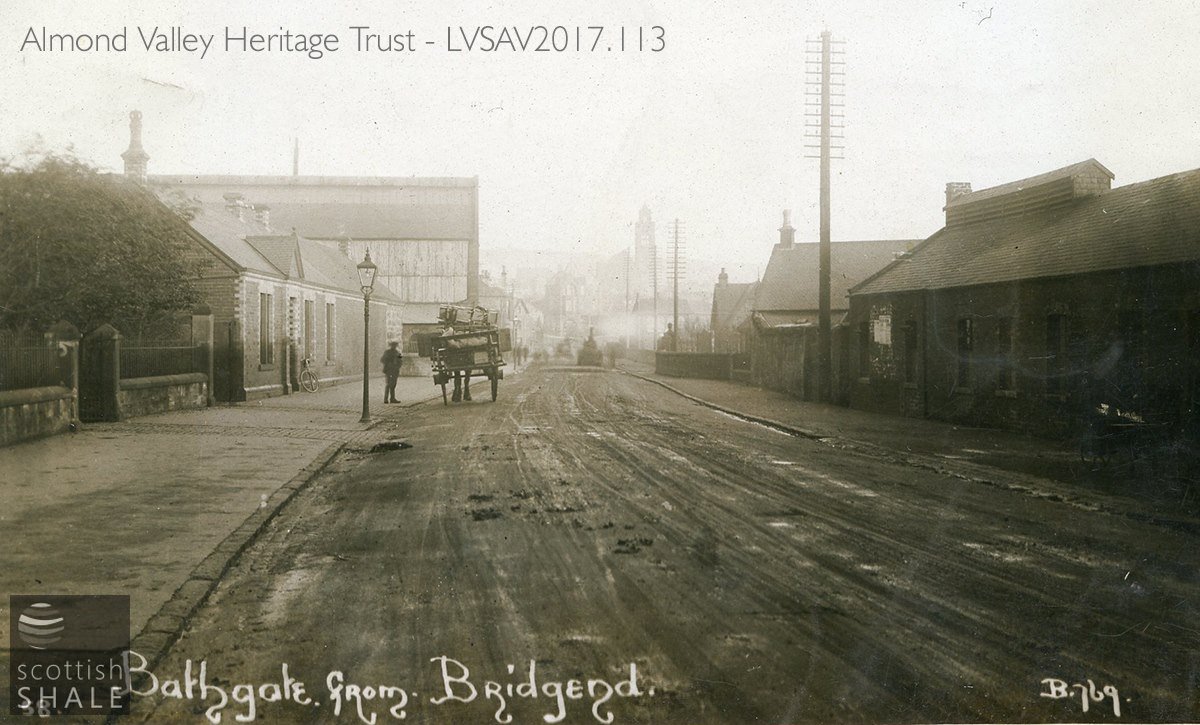 Industry at Bridgend, pictured some time before 1911. 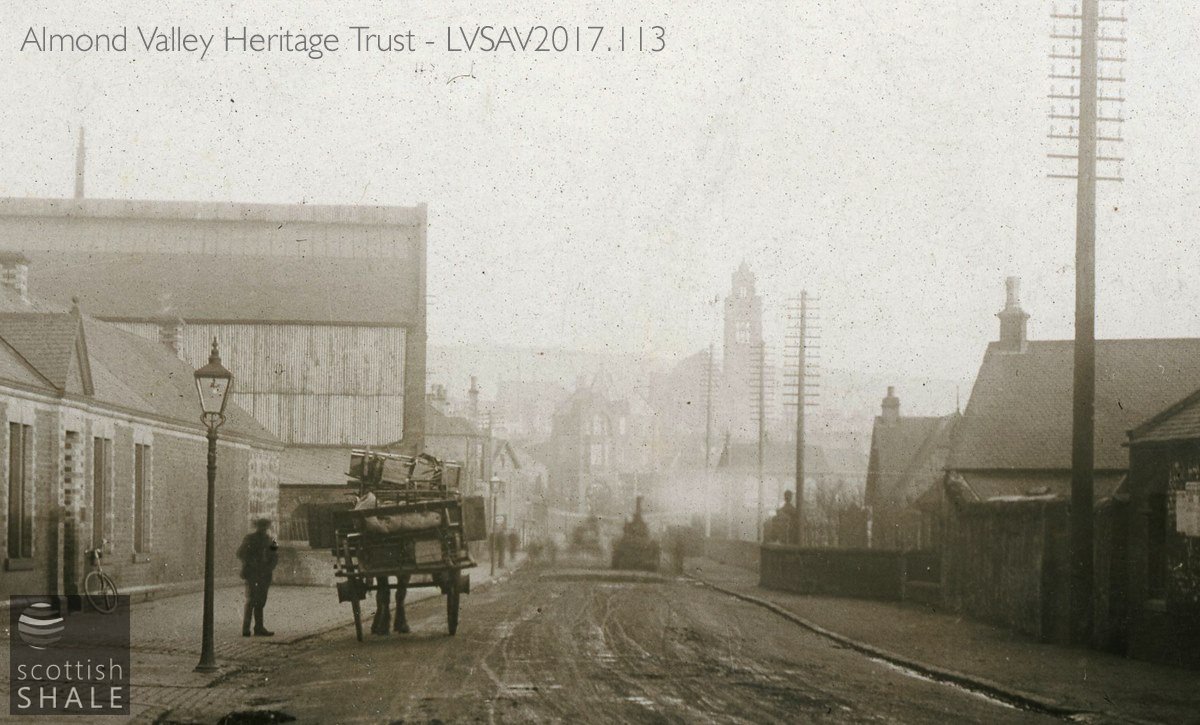 Close up, showing cart, steam roller and signal box
The fine red sandstone building at the parting of North and South Street - now housing the 1912 cafe & bar - seem to have already been extant in 1911 (or earlier) when this photograph was taken.

This postcard from our collection shows a wonderfully grimy industrial view of the Bridgend area of Bathgate, postmarked 1911, looking eastwards along Glasgow Road towards the parting of North and South Bridge streets. On the left, a bicycle has been left outside the offices of George Wolfe & Sons, spade and shovel manufacturers, while close to the gas lamp, a carter stands by a precarious load of what might be someone’s household furniture. Beyond is the corrugated iron-clad bulk of the Bathgate foundry, and in the distance across the road, the arched windows of the signal box guarding the level crossing can be discerned. A steam roller seems to be at work, filling in holes outside the cemetry gates. The pavement then narrows where the Bathgate Water passes beneath, and to the right, buried in the shadows, is the single storey brick building with a louvred roof vent that was the original West Lothian shovel works. Remarkably, this building still survives, in use now as a tyre depot

George Park and George Wolfe built the West Lothian shovel works in about 1875 on an oddly shaped scrap of land at Bridgend, between a burn and the Glasgow road. The partnership was soon dissolved, Wolfe setting up on his own account in a works in North Bridge street, and Park continuing production at Bridgend. Small household shovels were made in modest quantities using fairly rudimetary machinery. A sales notice lists a bar-cutting machine, a boring machine, a punching machine, a patent emery grinding machine and a set of rollers. When Park’s business failed, George Wolfe bought and modernised the premises, and with continued success, bought land at Bridgend north of the Glasgow road to construct a much larger factory manufacturing an extended range of spades and shovels. In 1896, Wolfe opened rolling mills to supply sheet steel for the spade works, much of the steel produced from heating and reforming old railway rails. Bathgate spades soon gained a reputation for excellence and were exported throughout the world.

The original shovel works continued in the ownership of George Wolfe & Sons into the 1930’s, laterly used as as store. At the end of World War Two, the site at 13, Glasgow Road became the garage and workshop of West Lothian Motors Ltd. 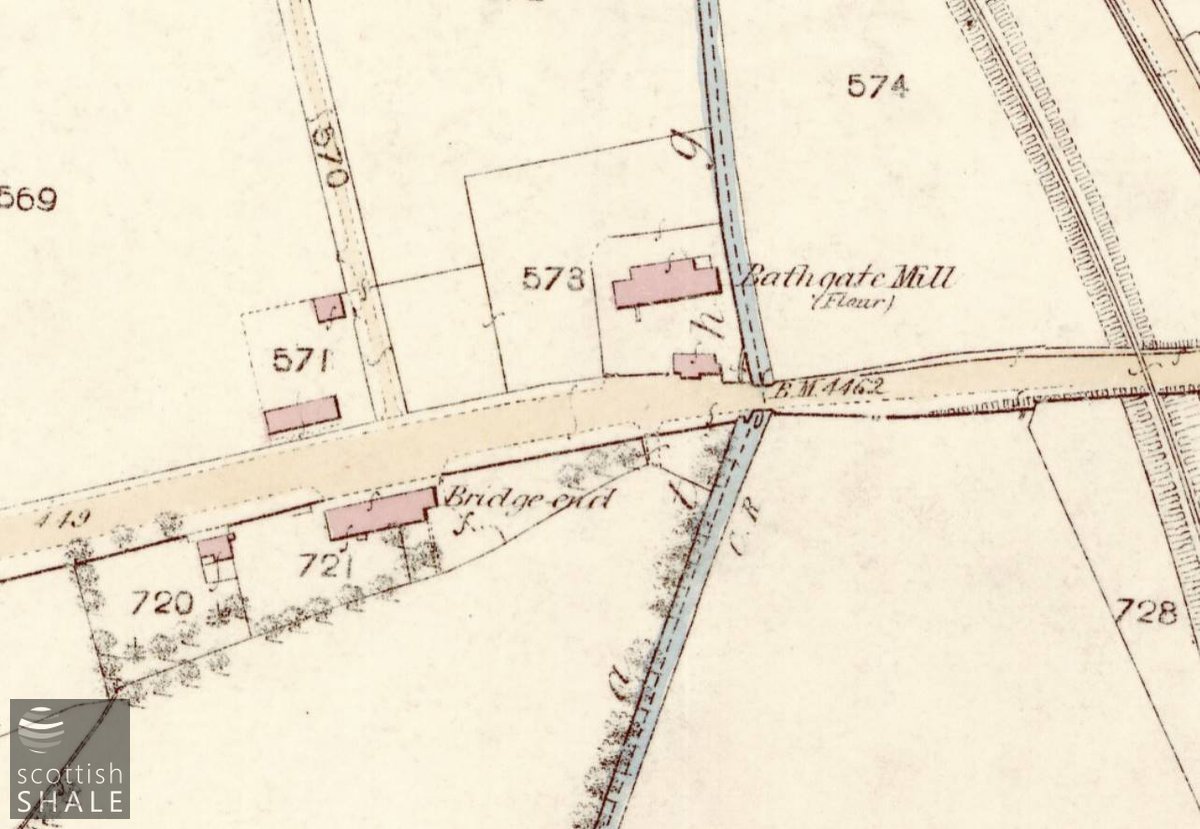 The area in 1854, after completion of the Monklands Railway route to Westfield, but before the spread of industry. The Bathgate flour mill was later purchases by George Wolfe, and the site redeveloped. 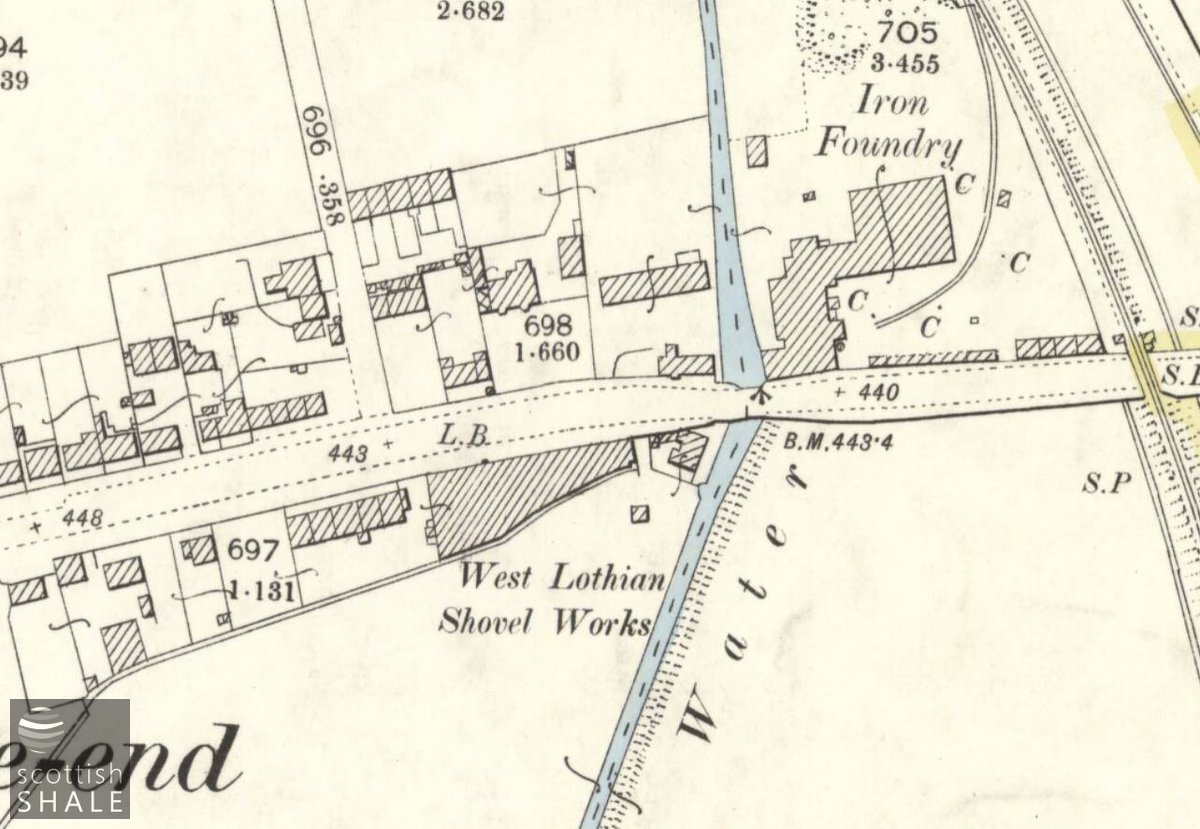 The area in 1896, with the Shovel works in production, and the old Bathgate mill seemingly intact. 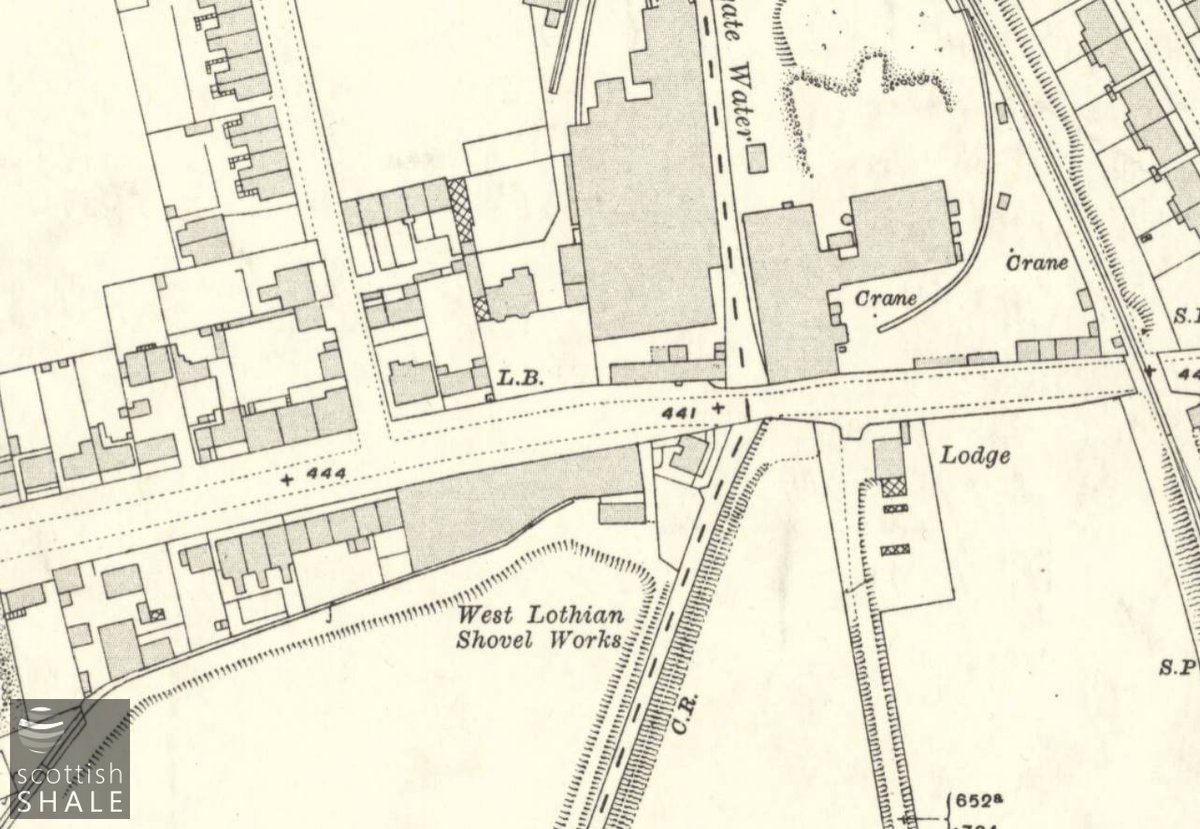 The area in 1913. The original shovel works have been extended slightly so they bridge the burn, and the new spade and shovel works now occupy the site of Bathgate mill. 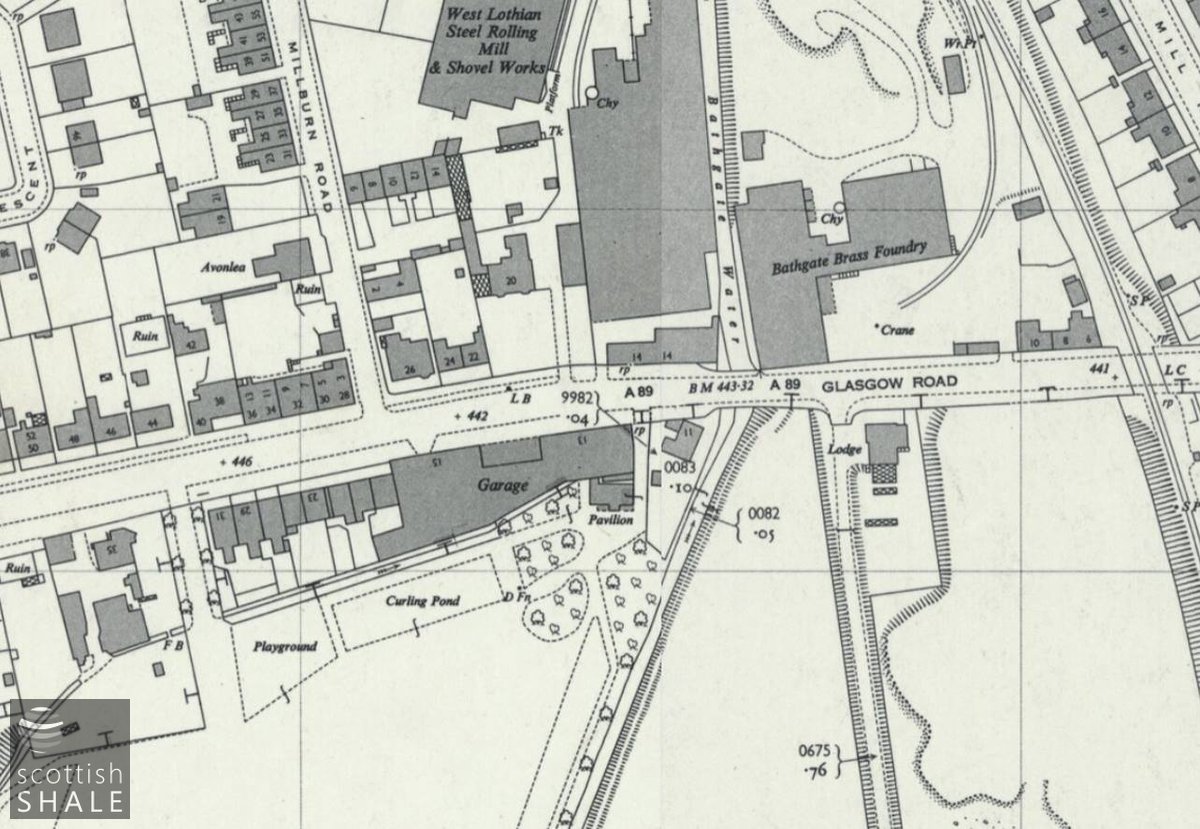 The area in 1955, following further extension of the shovel works and rolling mill north of the Glasgow Road. 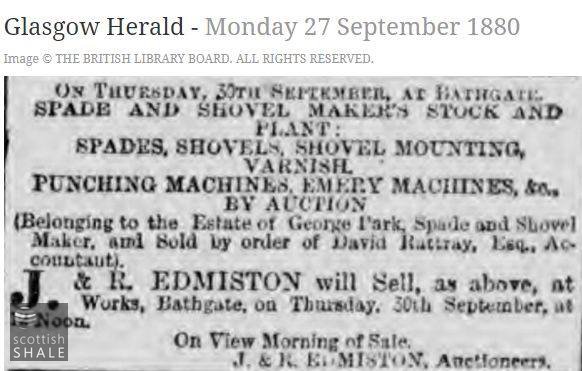 Sale of the works, following the failure of George Park & Co. 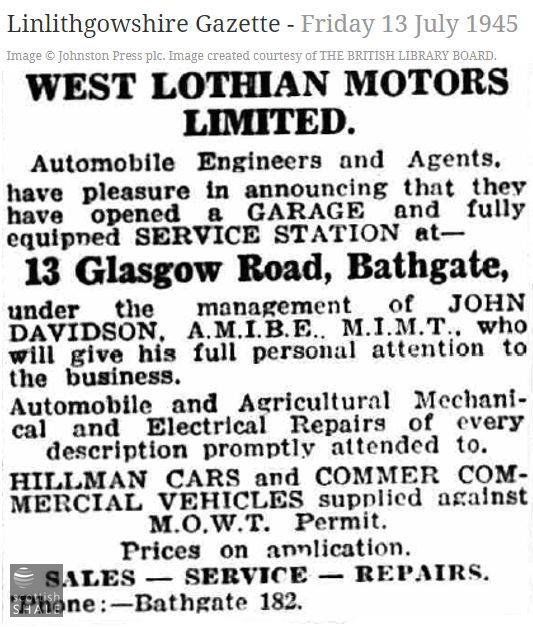 New use for an old building. 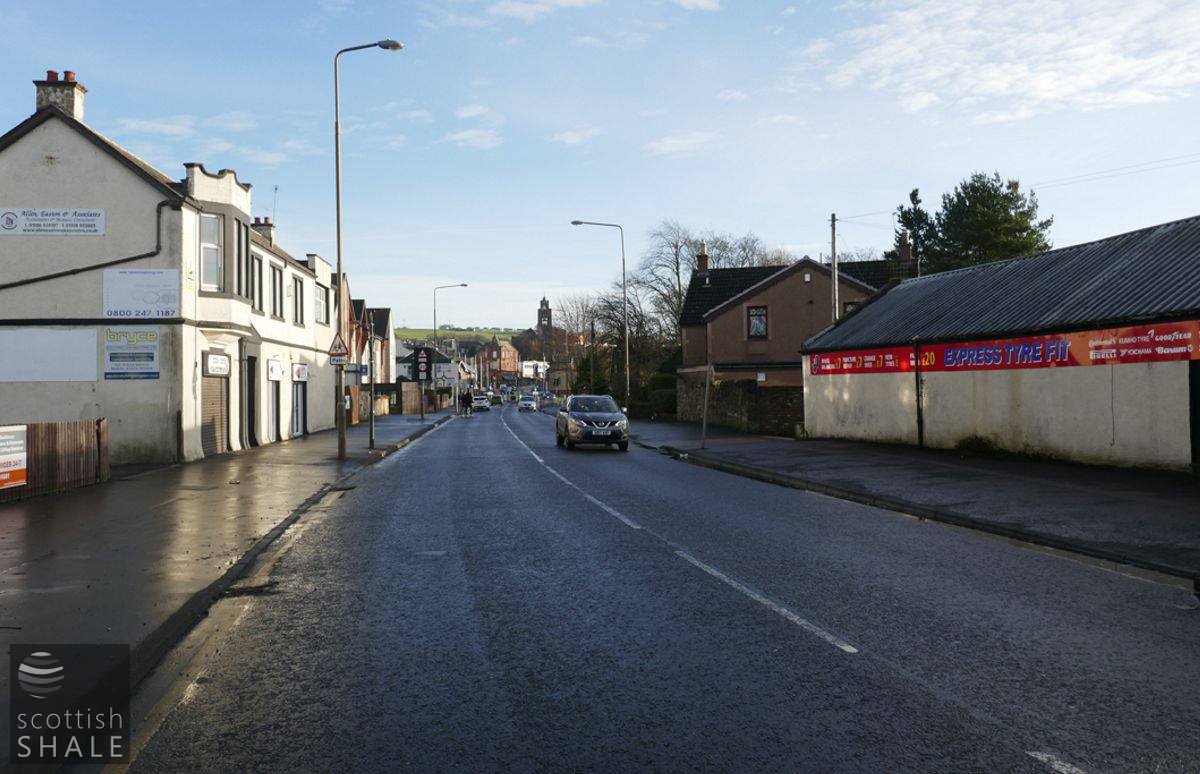 A similar view (as the top images) today. 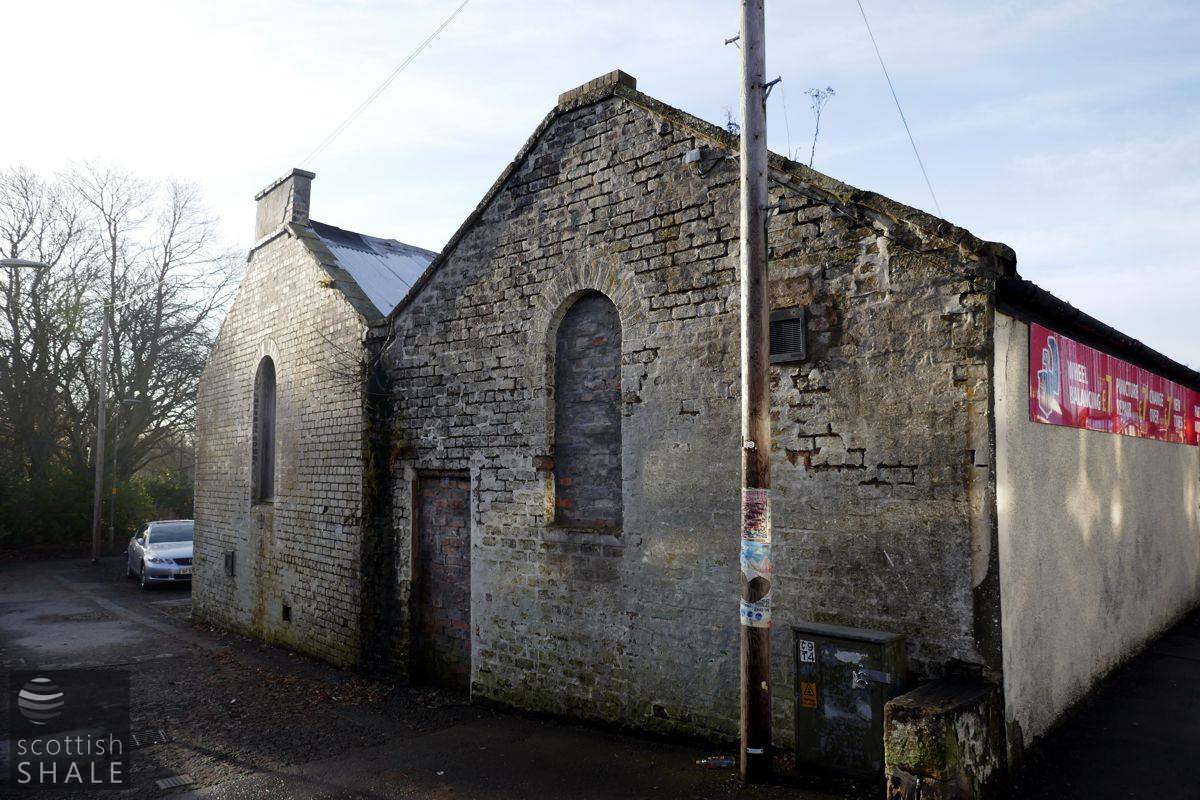 The gable ends at the east of the West Lothian shovel works building. The left hand gable, skewed to fit the land boundary, appears to have been a later addition, and bridges a burn that feeds the Bathgate Water. 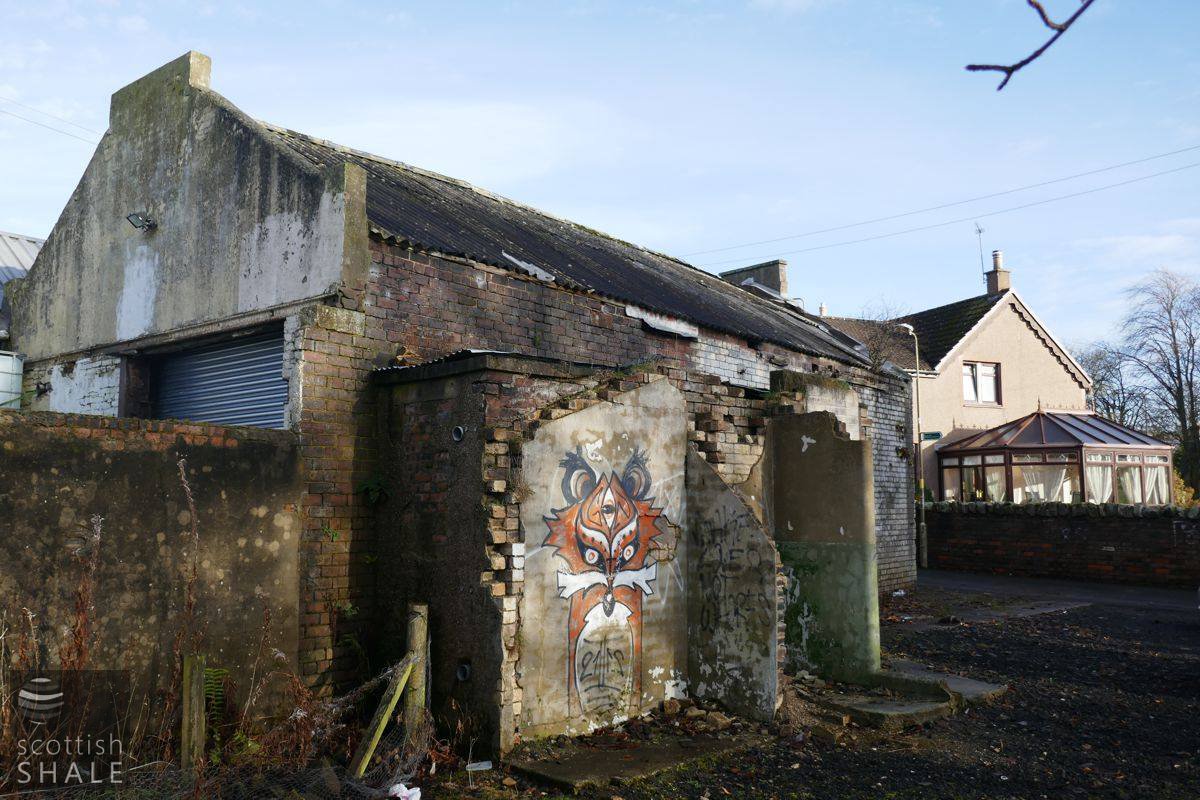 View from the park, with remains of the park pavillion that abutted the shovel works. 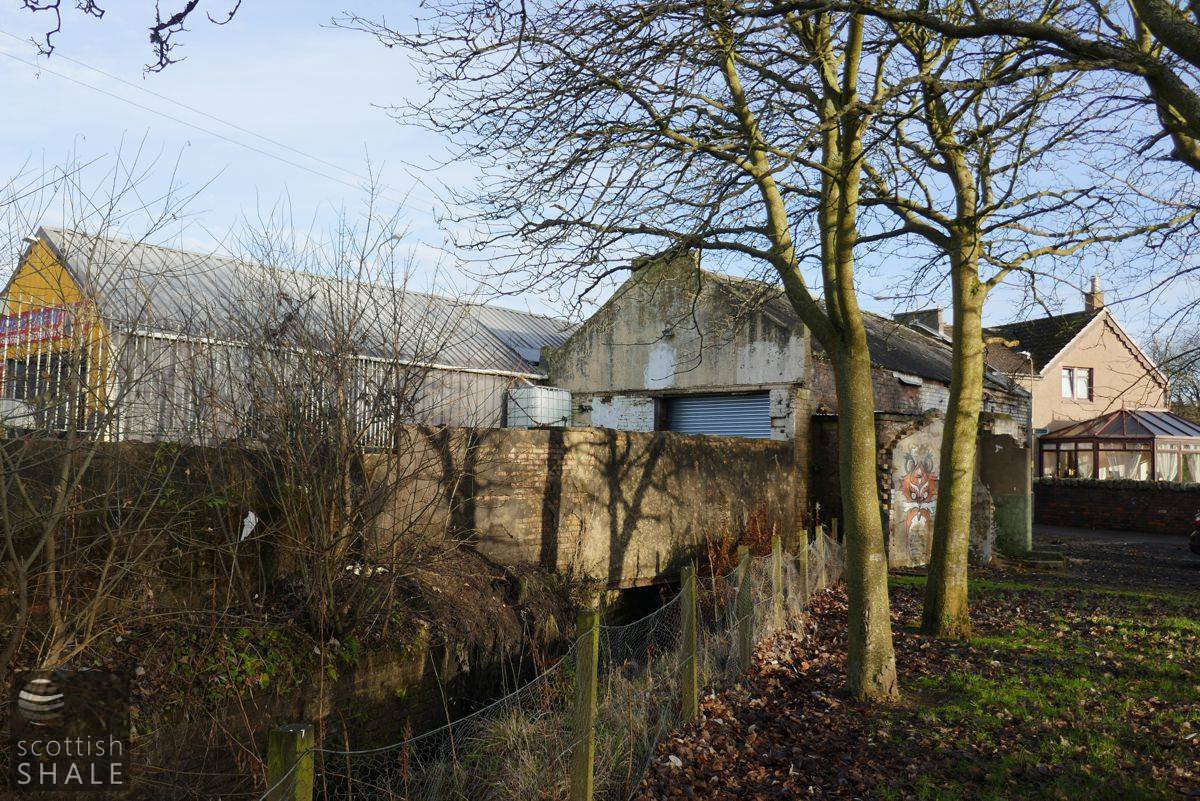 View showing the burn passing beneath the works. The roof of the culvert seems to be formed from old railway track. 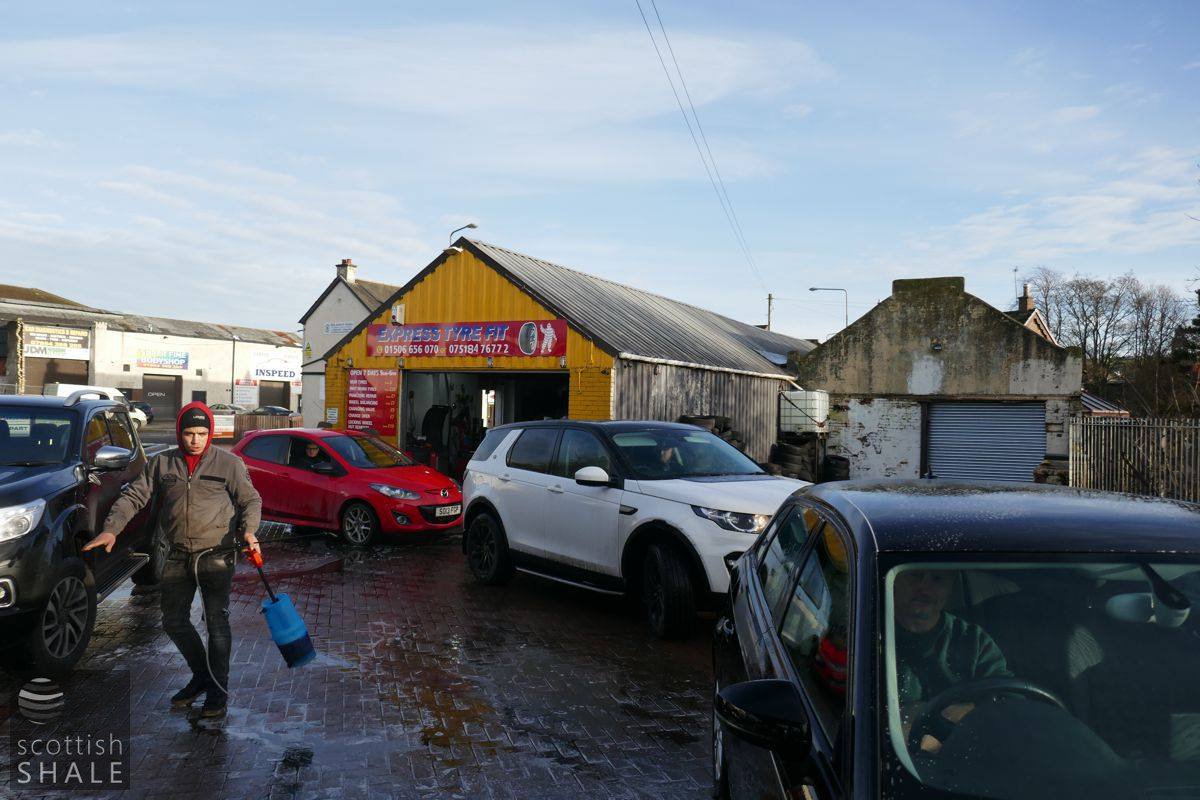