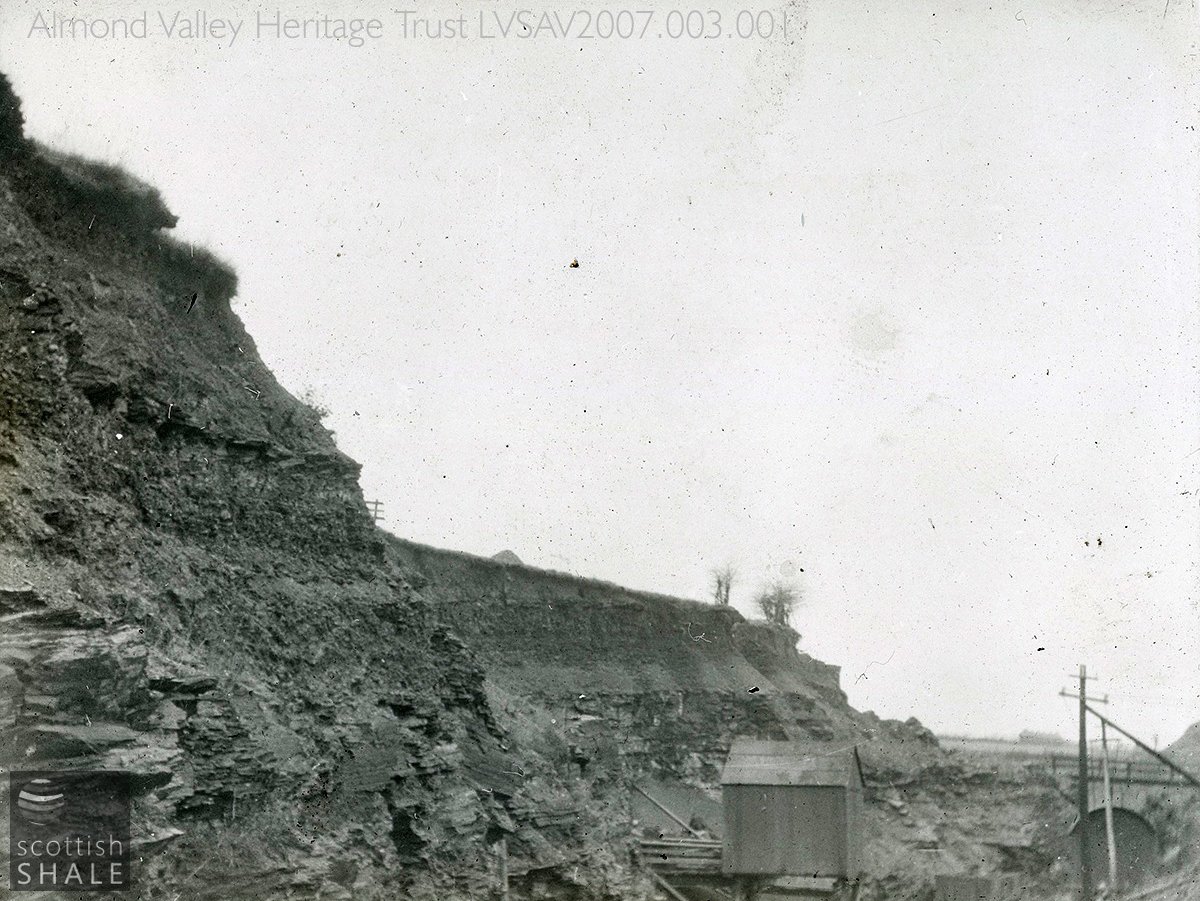 The quarry, with what appears to a gantry for loading standard gauge wagons, and an overbridge across the railway. 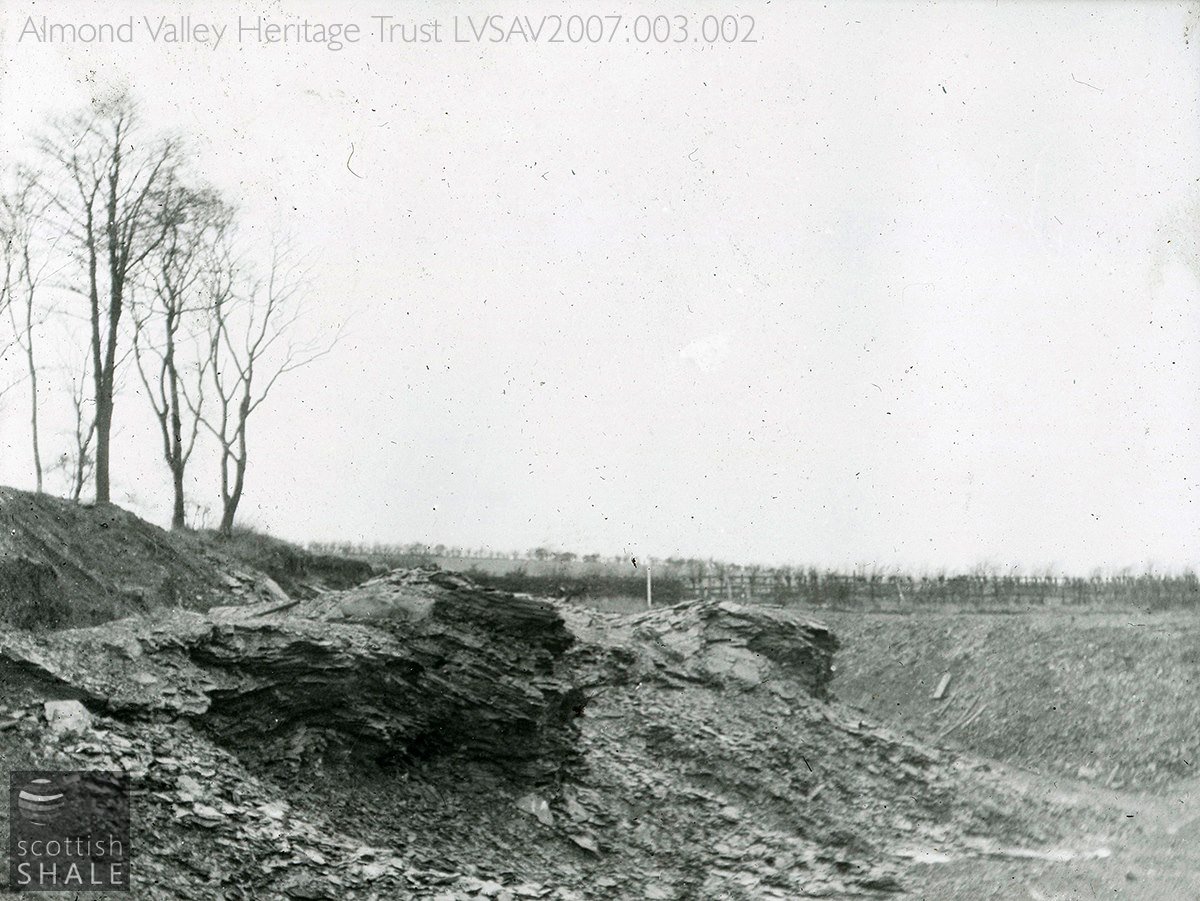 A further view of the quarry.

A strip of woodland, a little to the east of the present-day village of Bridgend, conceals the steep sides of a long cutting and old quarry workings where oil shale was once extracted to serve James Ross’ Philpstoun oil works. It’s one of the few places where you can still see oil shale rock exposed; but this strange, quiet, eerie landscape of mossy pools and twisted roots can only be properly explored in dry weather, and before the leaves return to the trees.

James Ross & Co., a Falkirk-based firm of tar distillers, built their Philpstoun oil works in about 1884, and within a decade had opened a number of shale pits in the lands to the south of their works. These were linked by a mineral railway that bridged the Union Canal, headed south and then crossed the old A9 on the level near Gateside. This line initially terminated at Philpstoun No.4 pit, which was about a mile and a half from Philpston works, but in plain sight of the Champfleurie works of their great rivals, the Linlithgow Oil Company.

The No.4 pit was sunk close to where steeply inclined seams of Broxburn shale outcropped at the surface, and the 1895 map shows various mines associated with the main pit shaft. All were abandoned in 1899 after a short working life, but in 1903 work began on excavating an opencast quarry south of the mine to reach seams of the grey shale. This was partly in response to the threat of a miner’s strike which would cut off all other supplies of shale. 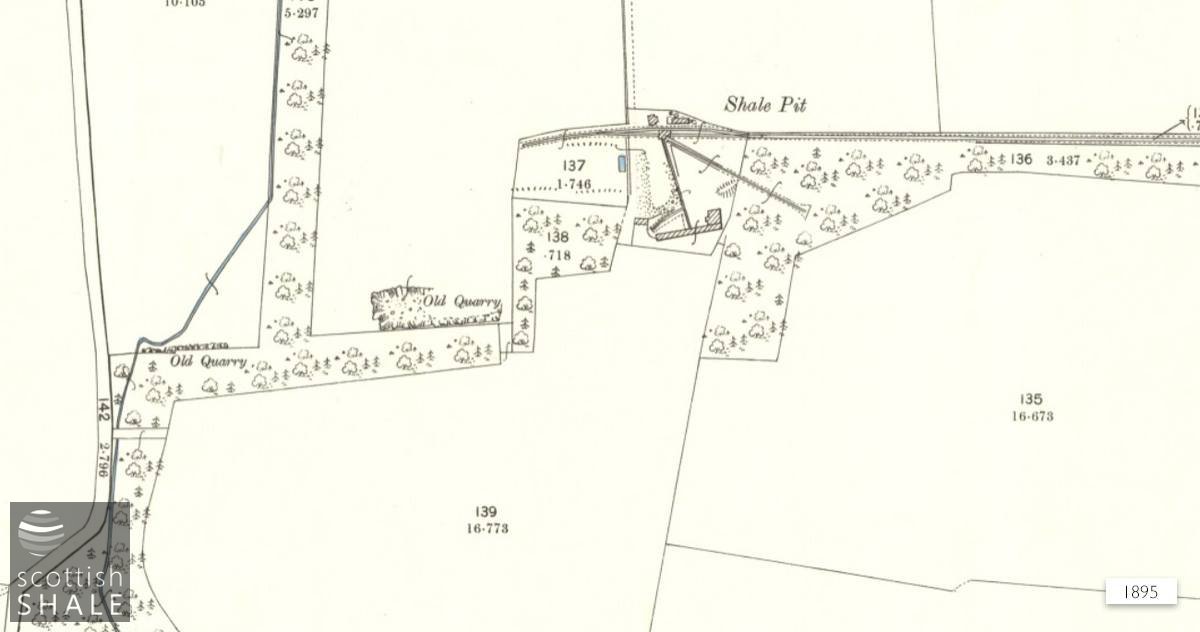 No.4 pit shown on the c.1895 OS map - courtesy of National Library of Scotland. 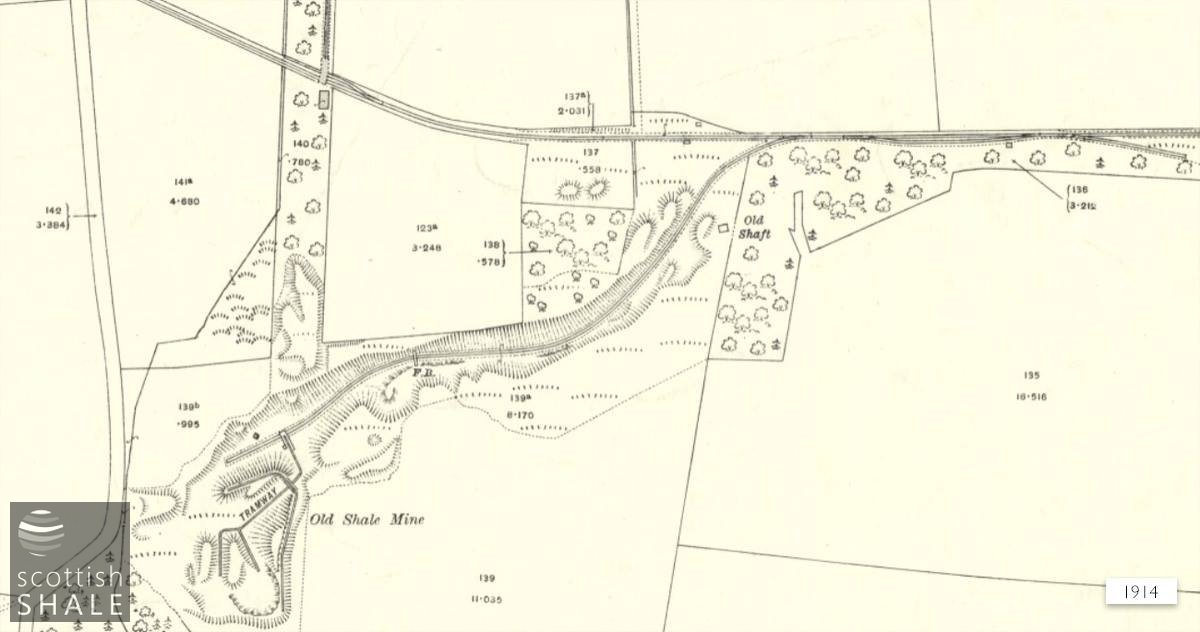 The quarry, by then disused, on the 1916 OS map,
courtesy of National Library of Scotland. 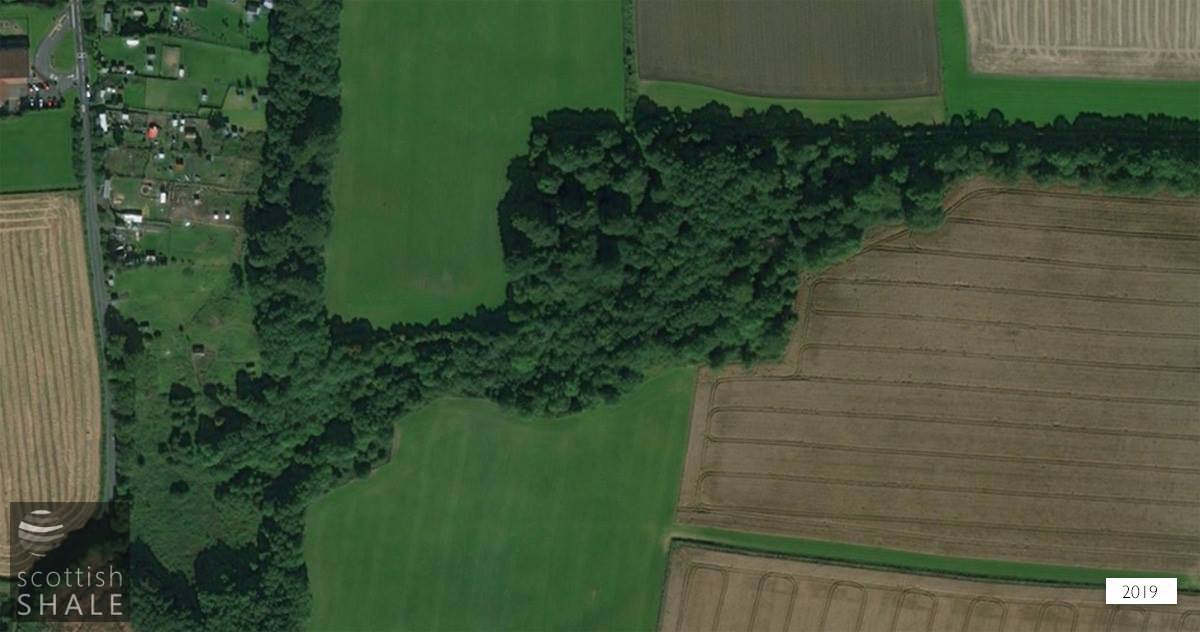 A deep cutting was formed to carry the mineral railway down to the quarry floor. Sheer sides of cut shale were left at one point to carry a footbridge over the line. No large machinery seems to have been used in the quarry; instead shale seems to have been worked by driving mines into the quarry face, in a similar manner to underground working, before opening up the area. Shale was loaded by hand into hutches, pushed to a staging over the mineral railway, then tipped into a standard gauge wagon below.

The only recorded fatality in the quarry was of John Nailon, on 11th December 1908. Along with John Dales, he had started work at his usual time of 6am, but had shortly afterwards both had been entombed by a fall of fifty tons of shale. It was 9am before this was noticed, a further two hours passed before the injured Dales was released, and several more before the body of Nailon was recovered. John Nailon, who lived in Kingscavil, was a talented footballer who played regularly for Philpstoun Rangers

The quarry was abandoned in 1912, and appears to have been subsequently used as a dump for municipal rubbish. The course of the railway to the quarry floor now serves as a stream bed for most of the year, but crumbling walls of shale remain where the footbridge once crossed.

Much of the surface features of No.4 pit are still evident in the humps and hollows within the woodland, some highlighted at this time of the year by clumps of snowdrops. At another point, someone has dug a substantial hole, and hauled the excavated shale up the steep slope in a steel tray. It seems that the local weans have been having a great game, and perhaps provides evidence that shale mining runs in genes of Bridgend folk. 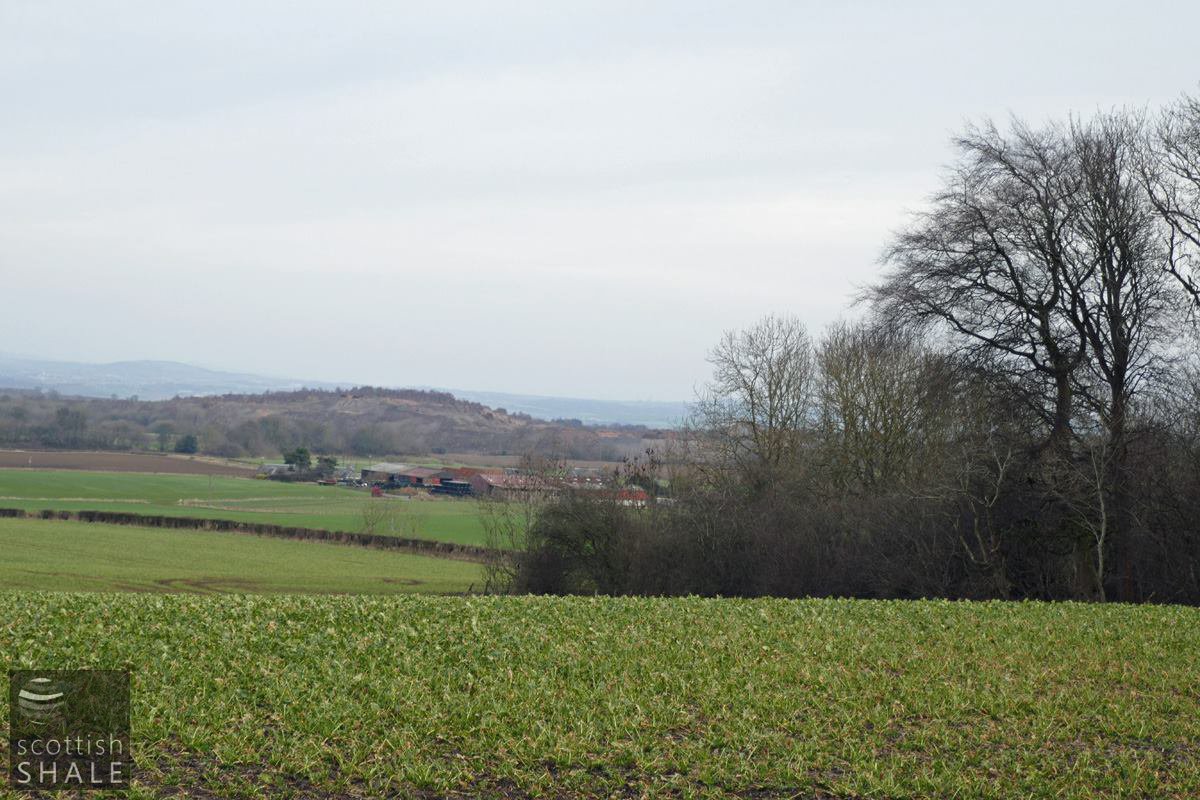 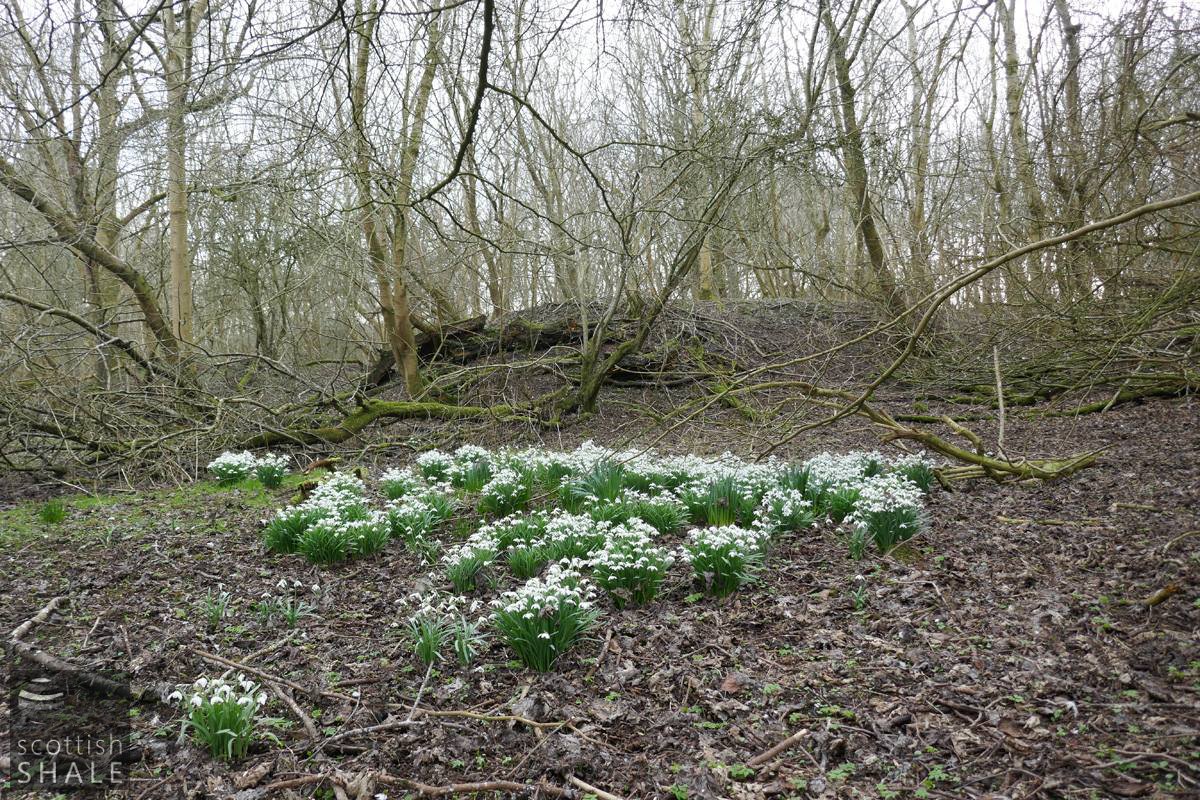 Site of pithead buildings at Philpstoun No.4 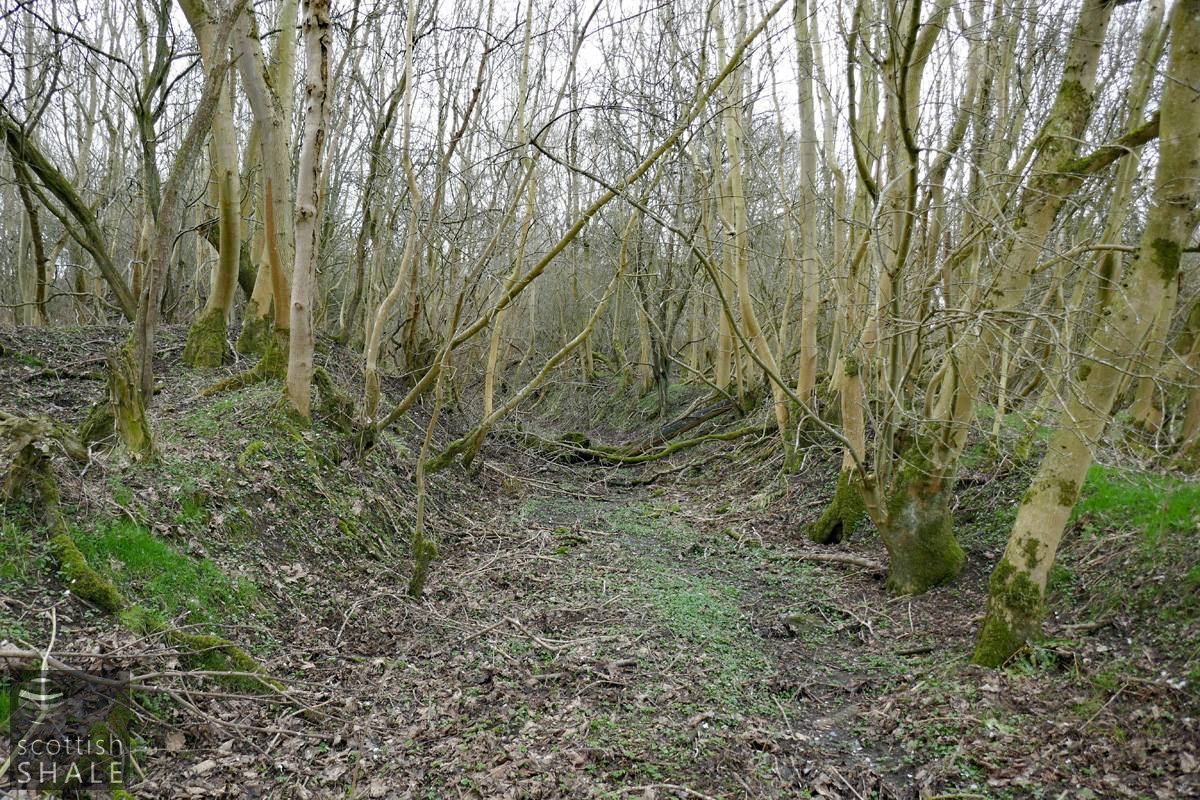 The railway to the quarry floor, close to its junction with the line to No.4 pit 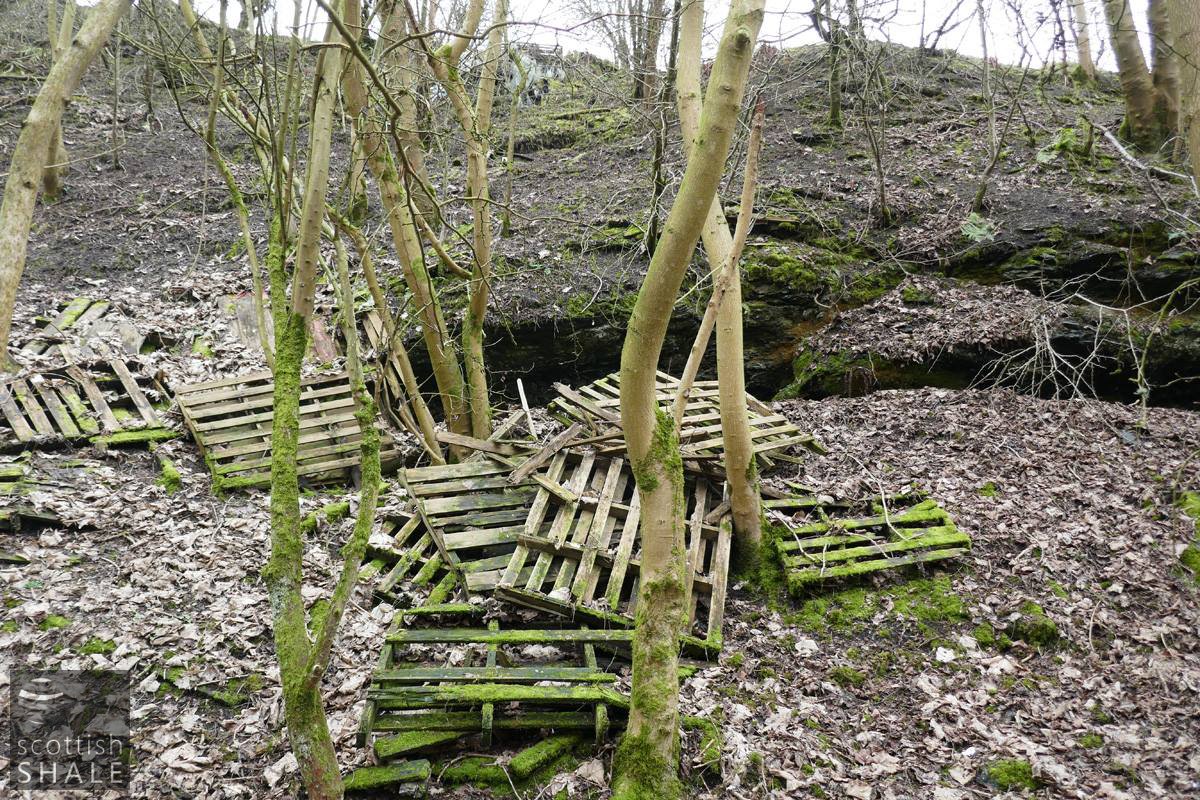 Perhaps the site of mining activity in to the quarry wall, highlighted by a good crop of dumped pallets. 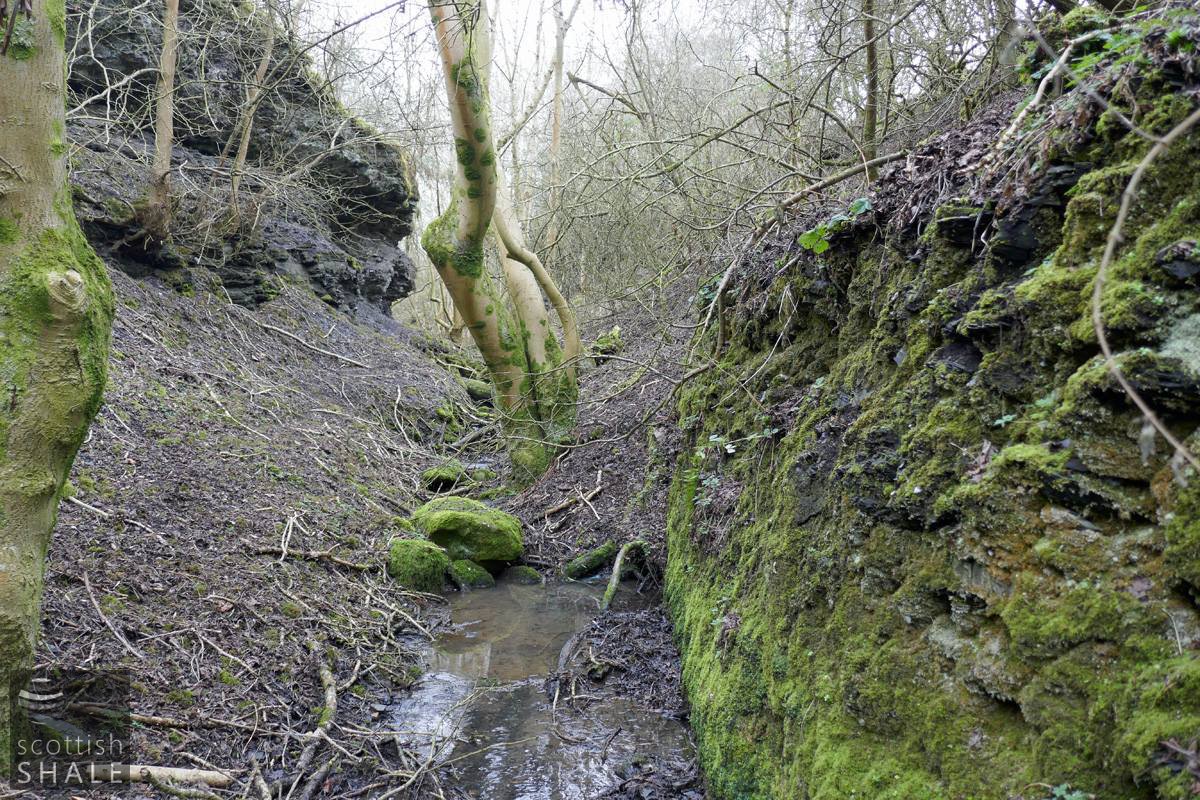 The railway passed through this steep-sided cutting. 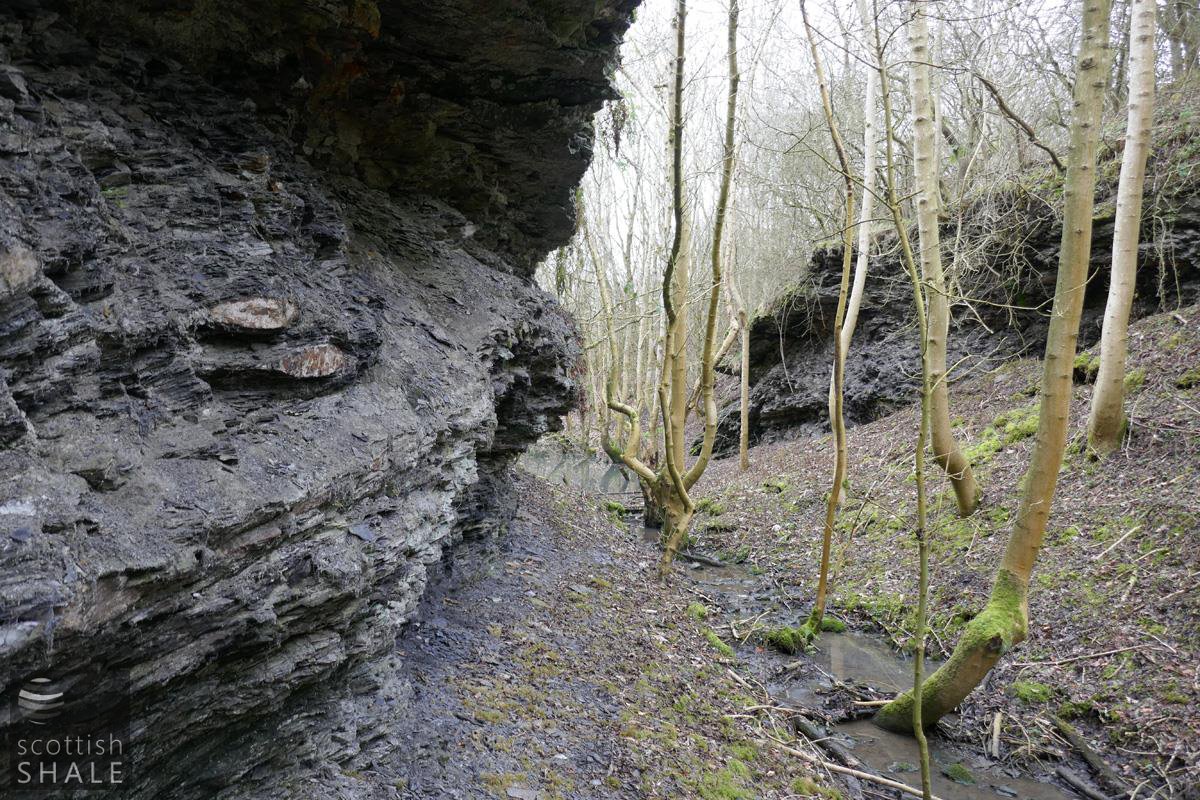 The footbridge will have passed across somewhere near this point. 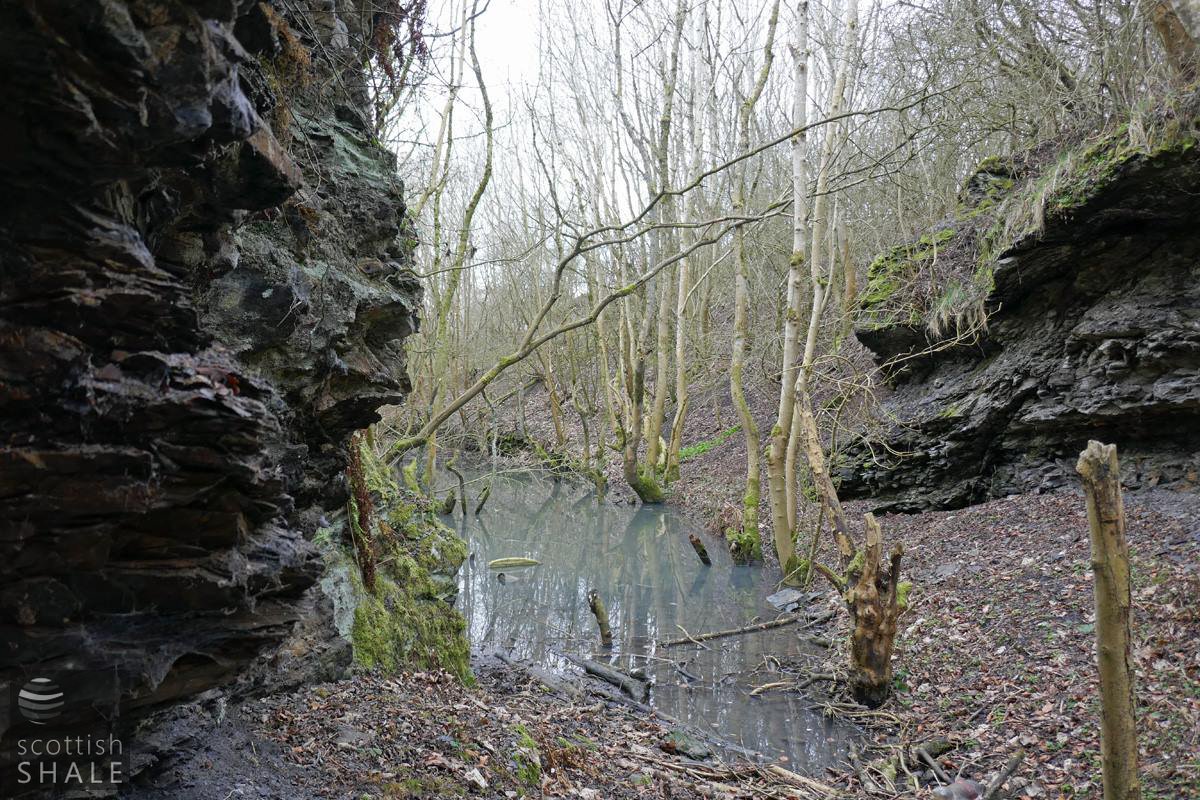 The railway trackbed is flooded above this point. 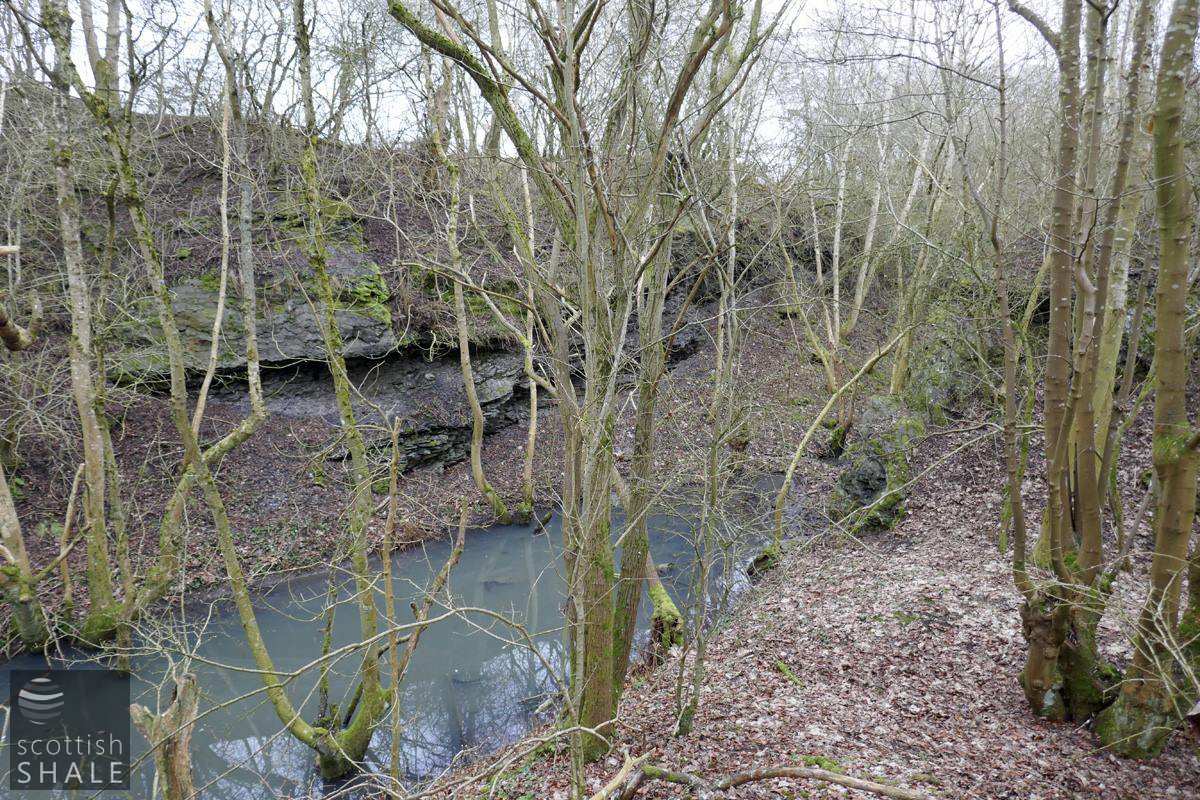 Blue lagoon within the quarry. 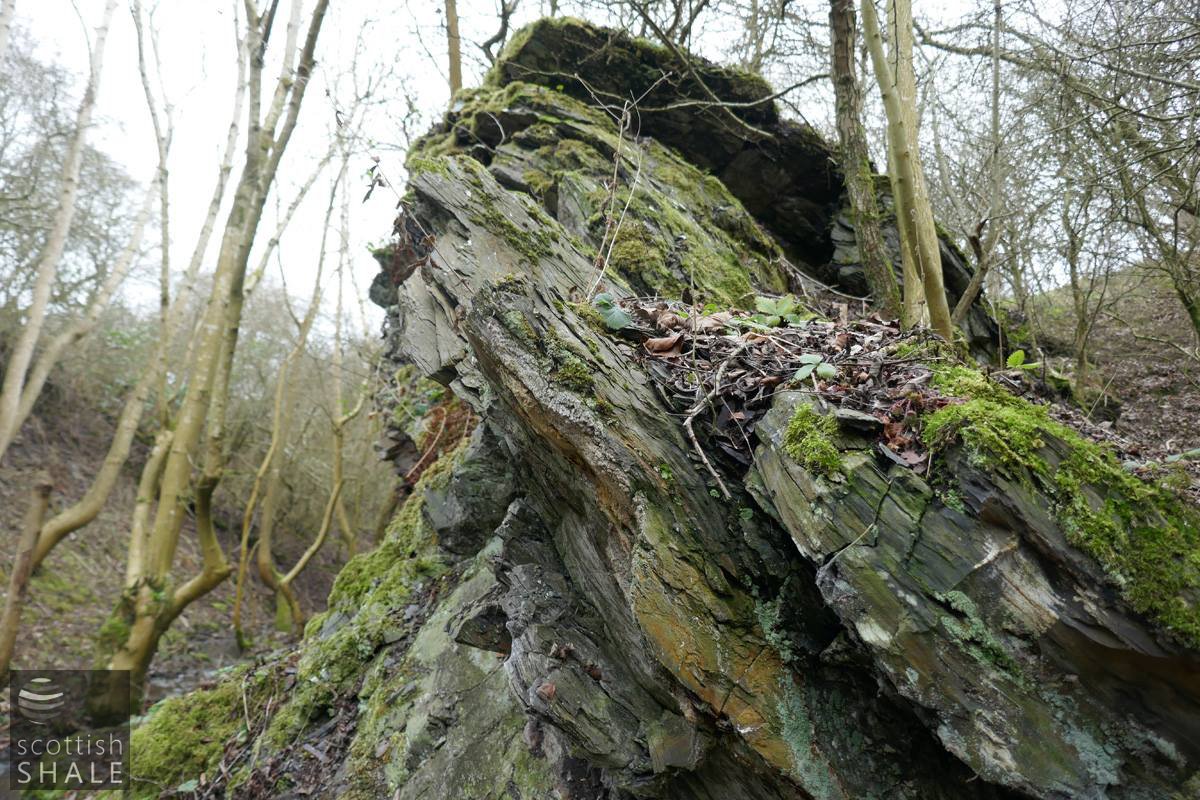 Evidence of the steeply inclined seams of shale. 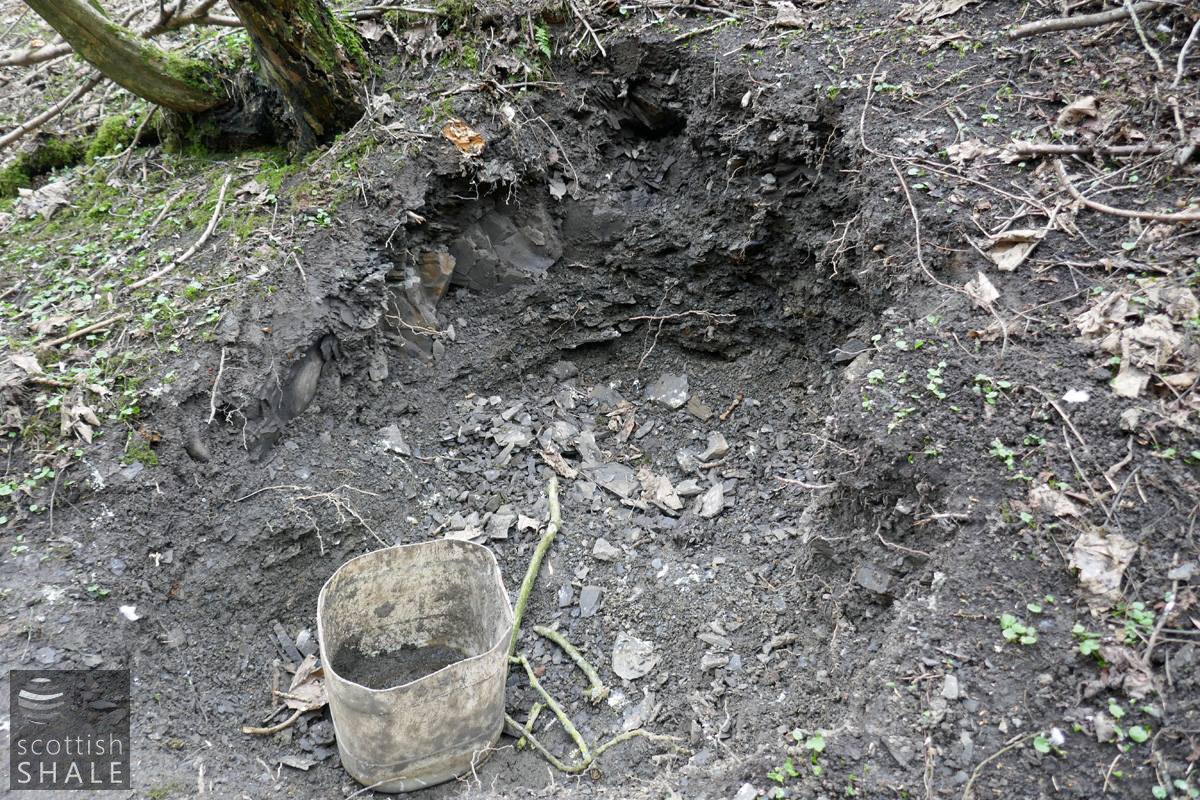 Someone has been mining shale? 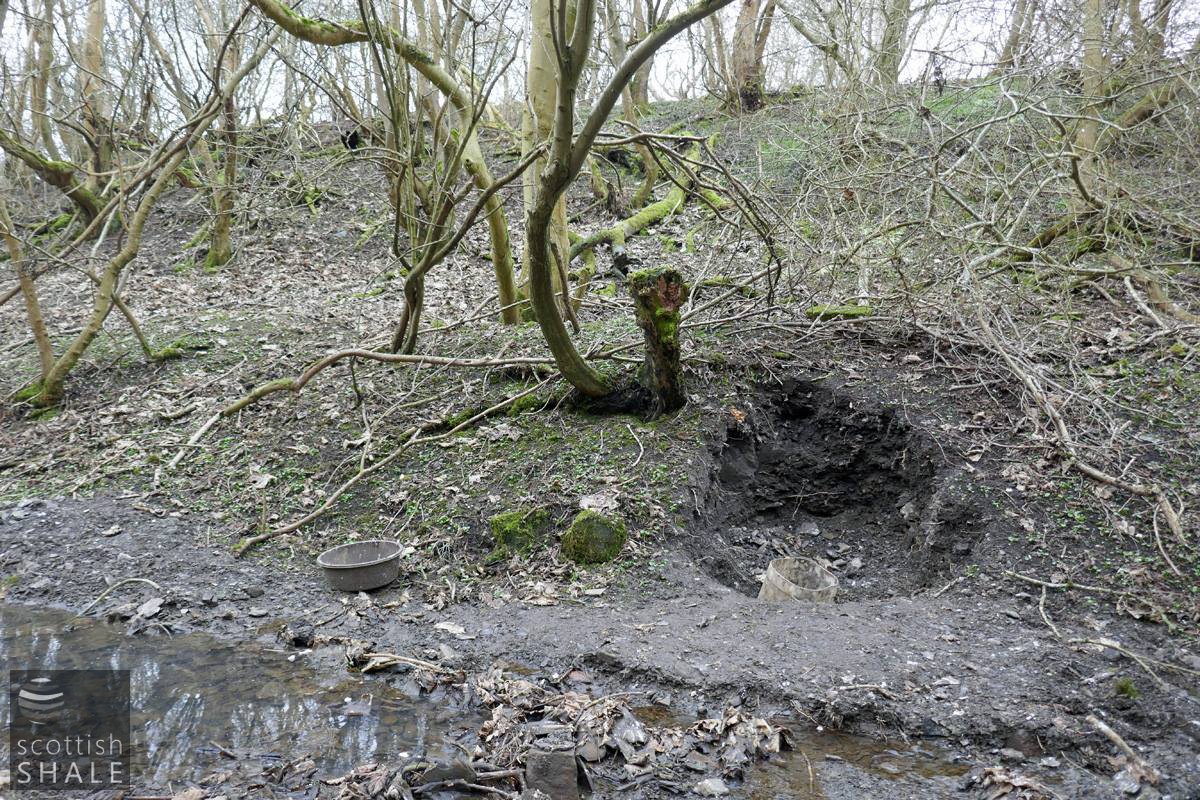 The 21st century shale mine? 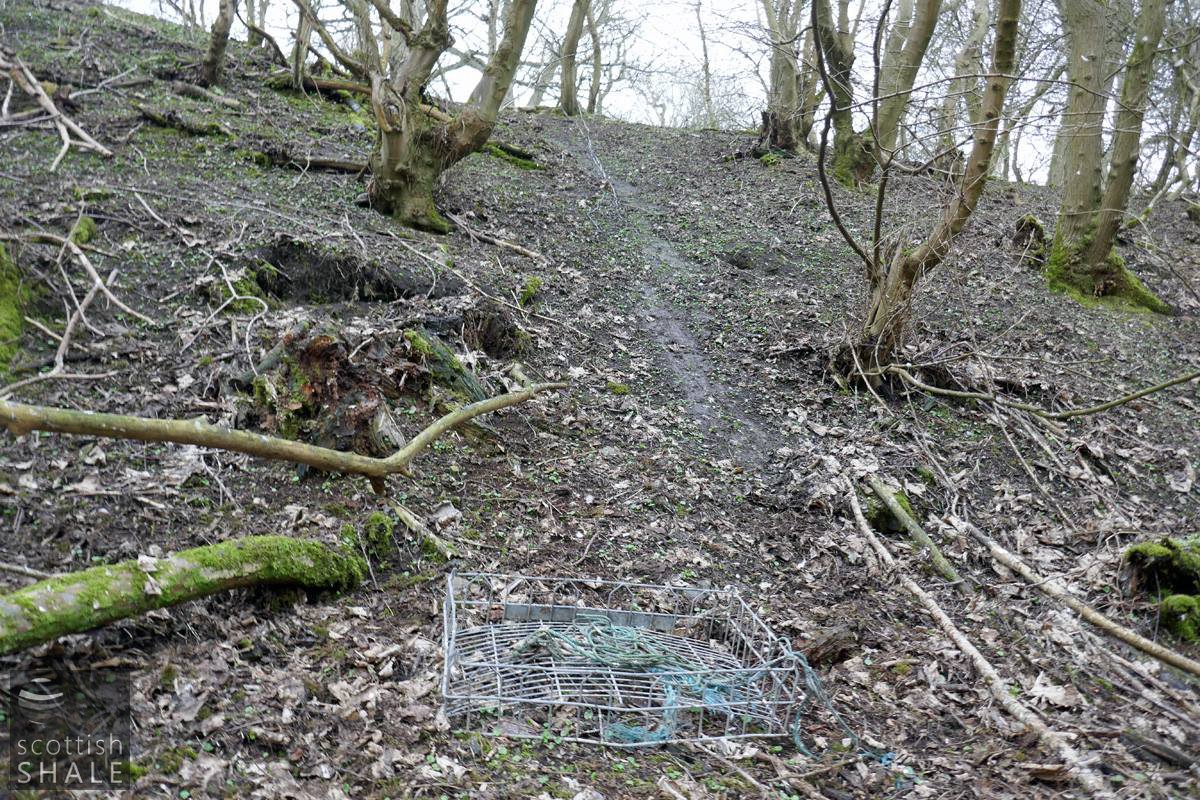 Shale haulage up the steep bank?