The Bridges of the Almond, from source to Polkemmet

The Almond in Lanarkshire 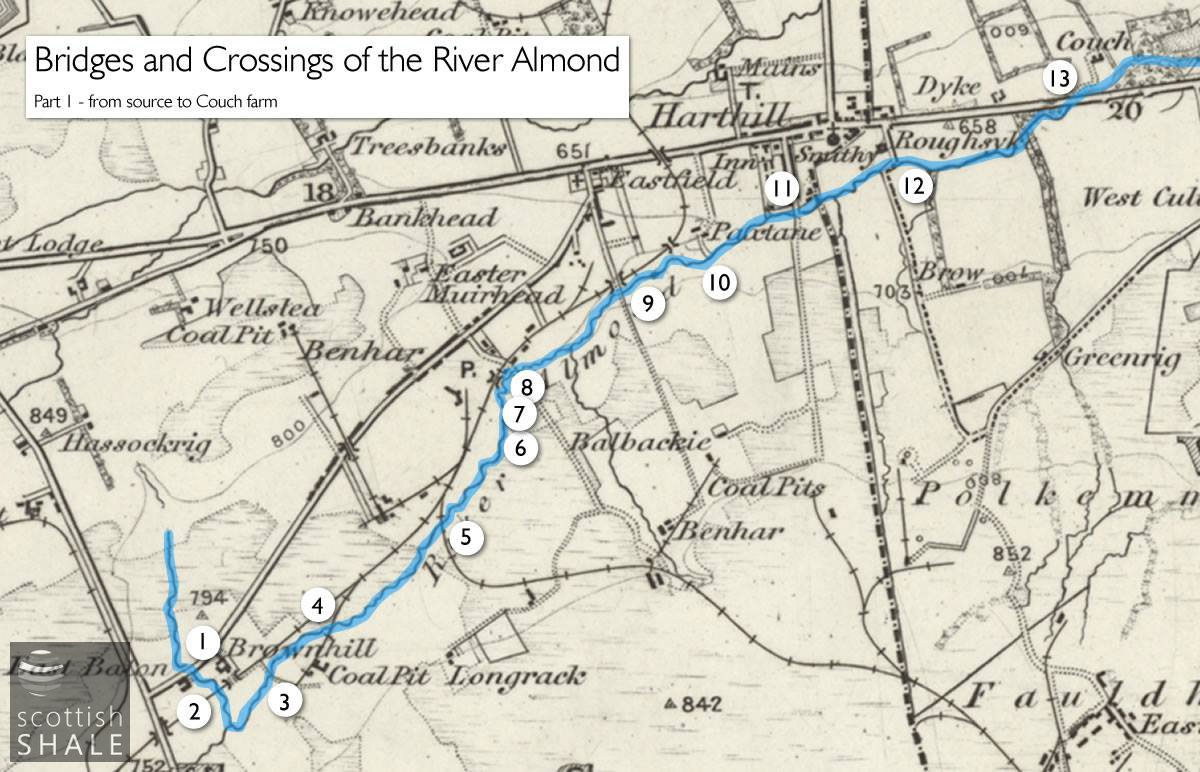 Bridges of the Almond marked on the 1" OS map c.1890 courtesy National Library of Scotland. 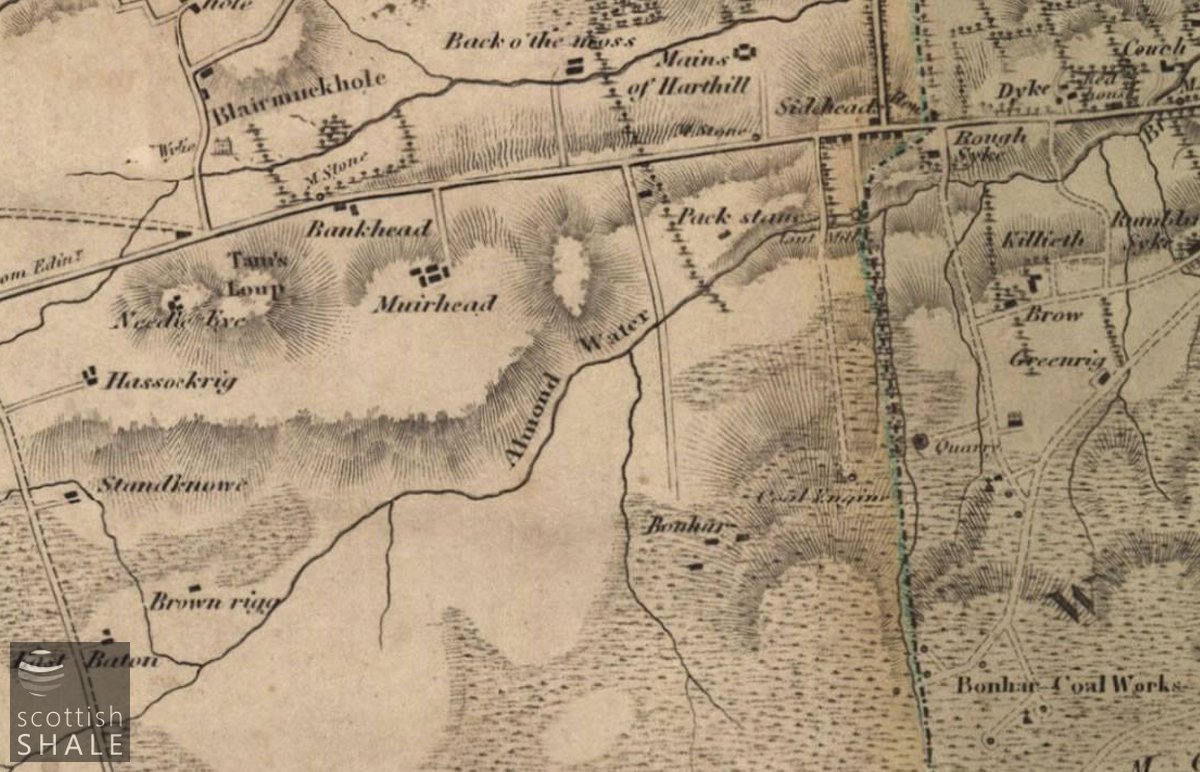 Roads linking the Bonhar coal works to the Edinburgh to Glasgow turnpike road - with the county boundary picked out in blue. From Forrest's map of 1818, courtesy of National Library of Scotland.

The River Almond flows 28 miles from the boggy uplands of Lanarkshire to the Firth of Forth at Cramond. The Almond was once a major obstacle to travel and was only bridged at a handful of crossing points. From early in the eighteenth century many new bridges were constructed to serve the growth in towns and trade. Some of these early structures still remain in use but go largely unnoticed beneath today's busy roads. Other bridges have have been by-passed by changing patterns of transport and survive as forgotten oddities in quiet corners. In a series of posts we'll explore the bridges of the Almond and the histories that they tell. 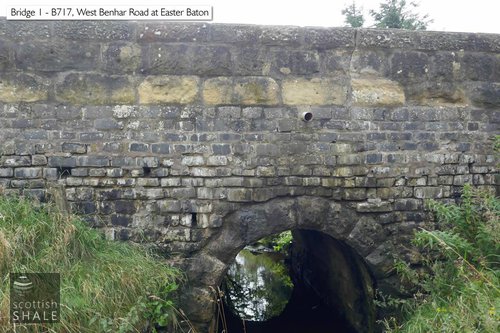 In the two miles between its source in Lanarkshire to the border with West Lothian, the Almond flows through a landscape bearing the scars of coal and ironstone mining and still picks up a little of the rusty tinge that was once carried downstream to pollute large stretches of river.

The infant Almond is first bridged by the B717 West Benhar road and flows in a narrow ravine through an arched culvert that might date from the 1840's, when the road was constructed to carry ironstone mined at Harthill and Eastfield to the iron furnaces of Shotts. The small burn then turns and flows along the broad valley near Brownhill farm passing beneath the Monkland Railway's Shotts branch, built in 1862 to further improve transport to the great ironworks. The Almond was diverted to flow neatly parallel to the railway for a period before flowing beneath a branch serving Brownhill colliery and the goods line, opened in 1864, that once run up to the Benhar moors and onward to Fauldhouse.

The river then flows north east through an area shaped by the Summerlee Iron Company's Benhar collieries. Coal mining continued here until 1962, and some of the colliery offices and pithead buildings still survive in an unloved condition. Brick and steel structures still span the river where colliery waste was once carried to the bing. The river then follows an unnaturally straight course having been diverted to avoid subsequent opencast coal work.

Four small bridges cross the Almond to the south of Harthill and Eastfield, three of which carried roads that linked the main street – once the great Edinburgh to Glasgow turnpike – to coal workings on the moors above the town. These roads seem to have been constructed in the late 18th century to serve the Benhar collieries; a cluster of shallow coal workings that extended either side of the county boundary. The Benhar pits produced a renowned household coal, prized in the well-off homes of Edinburgh and Glasgow despite the high cost of transport by horse-drawn cart along the turnpike road. Only the eastern-most of the three old coal roads, (and the only one within West Lothian) is now a public highway, having been extended and upgraded to link with the later mining communities of East Benhar and Fauldhouse.

Above right: The bridge appears to have been extended or patched up using old whinstone setts, and the parapet eans at an interesting angle. 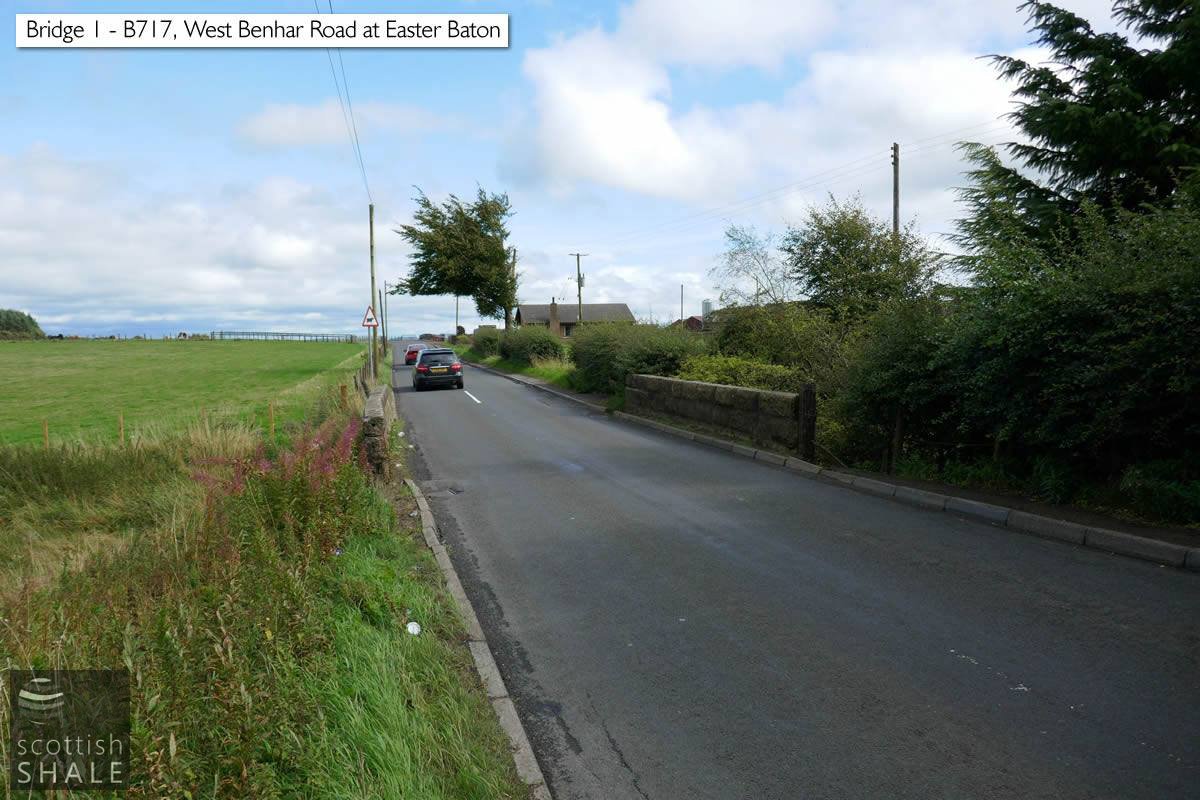 The B717 looking east at Easter Baton. The bridge parapet on the left side seems in a distressed conditions. 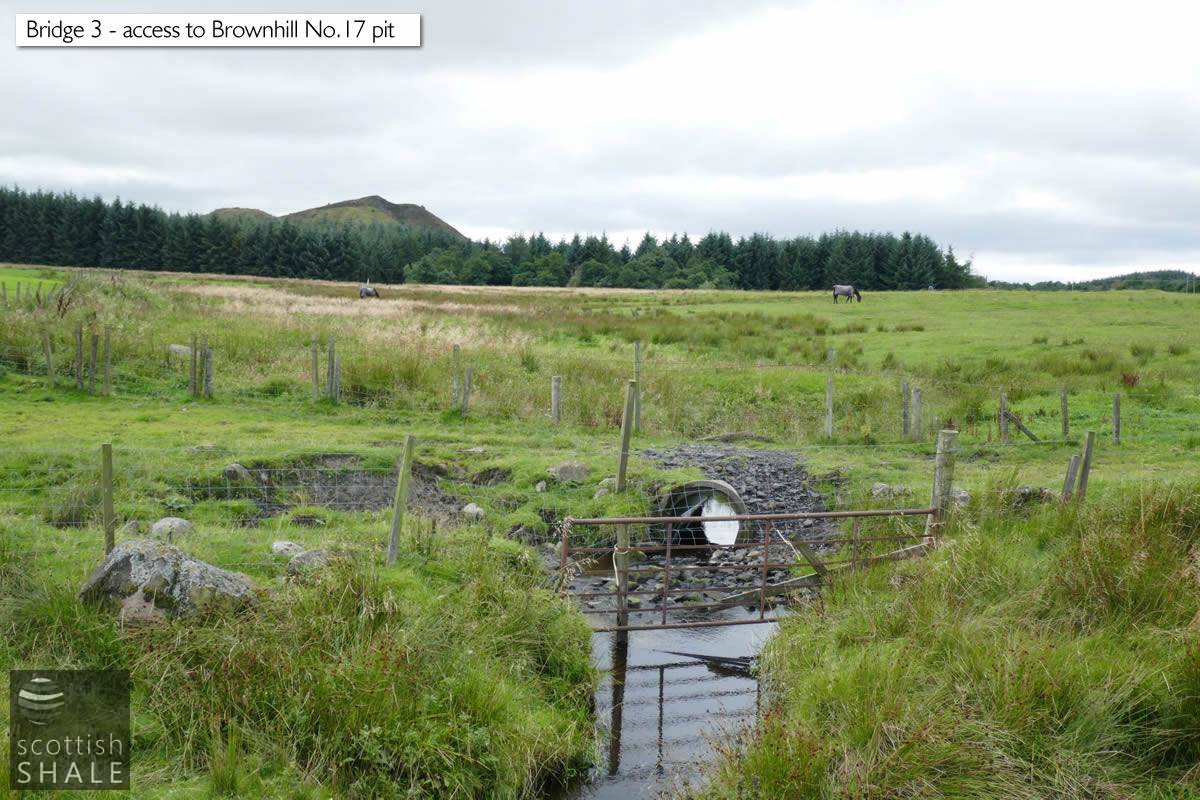 Culvert near Brownhill farm looking west to the bings of Calderhead colliery. 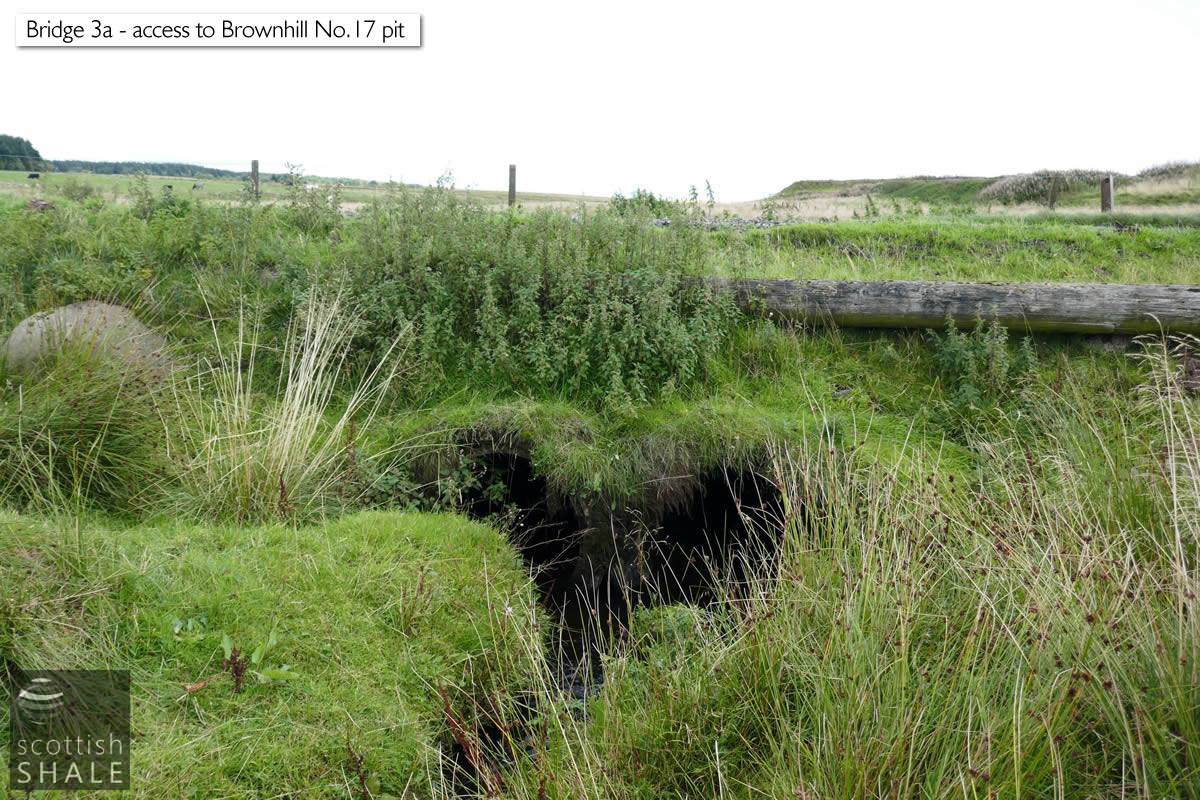 Another culvert near Brownhill farm, looking east towards the bing of Brownhill No.17 pit. 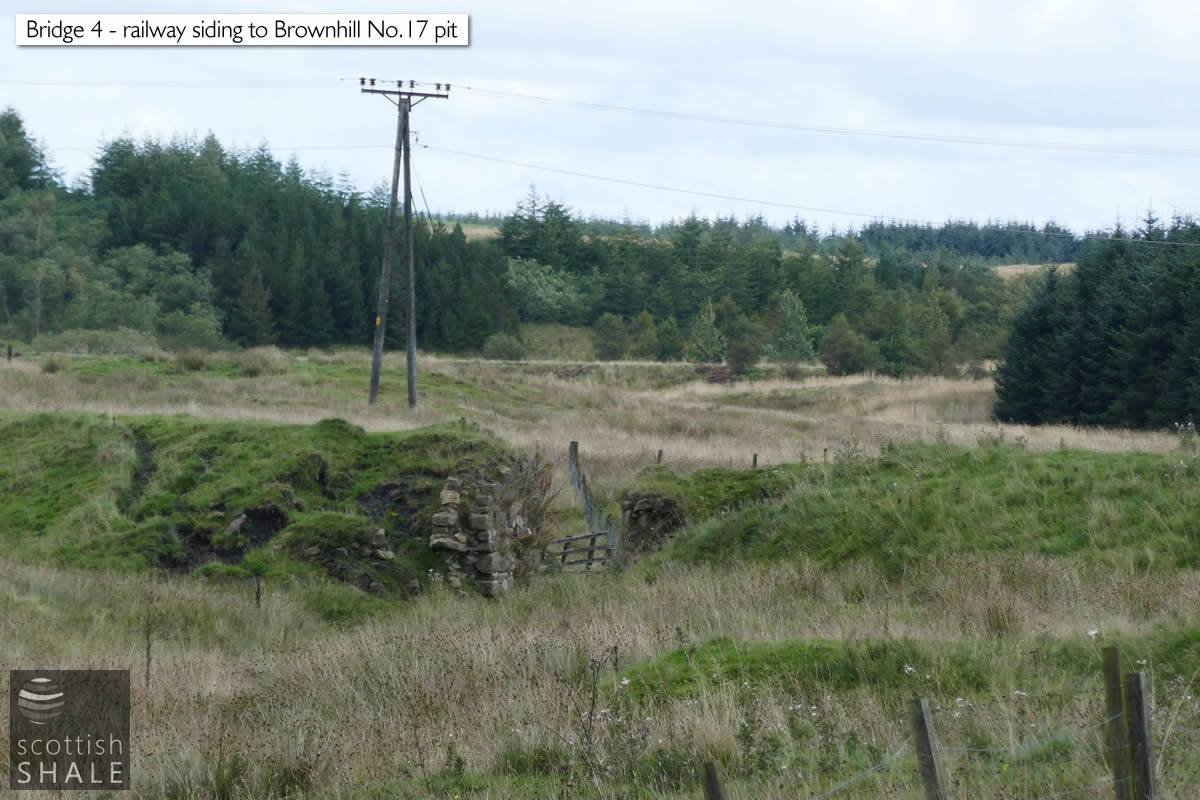 Ruined bridge across the Almond, serving the branch railway to Brownhill pit. 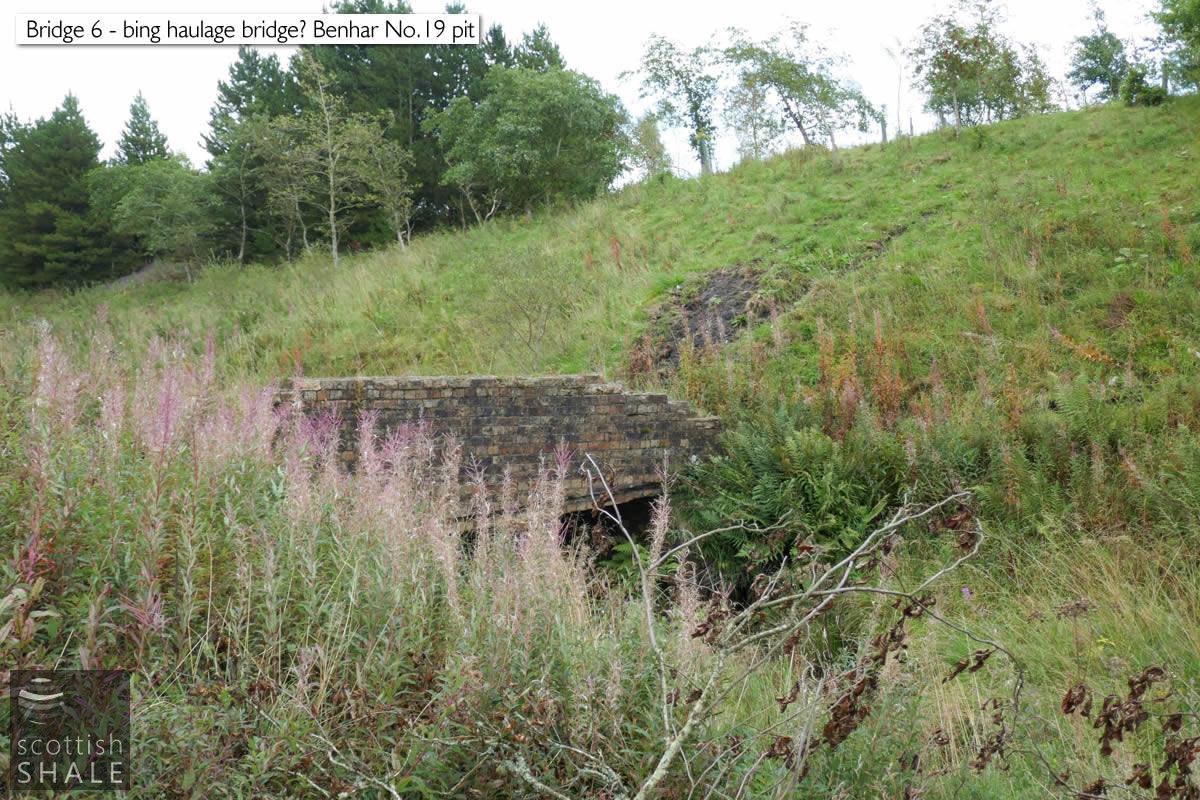 Crossing near Benhar colliery, presumably to carry pit waste to the bing on the right. 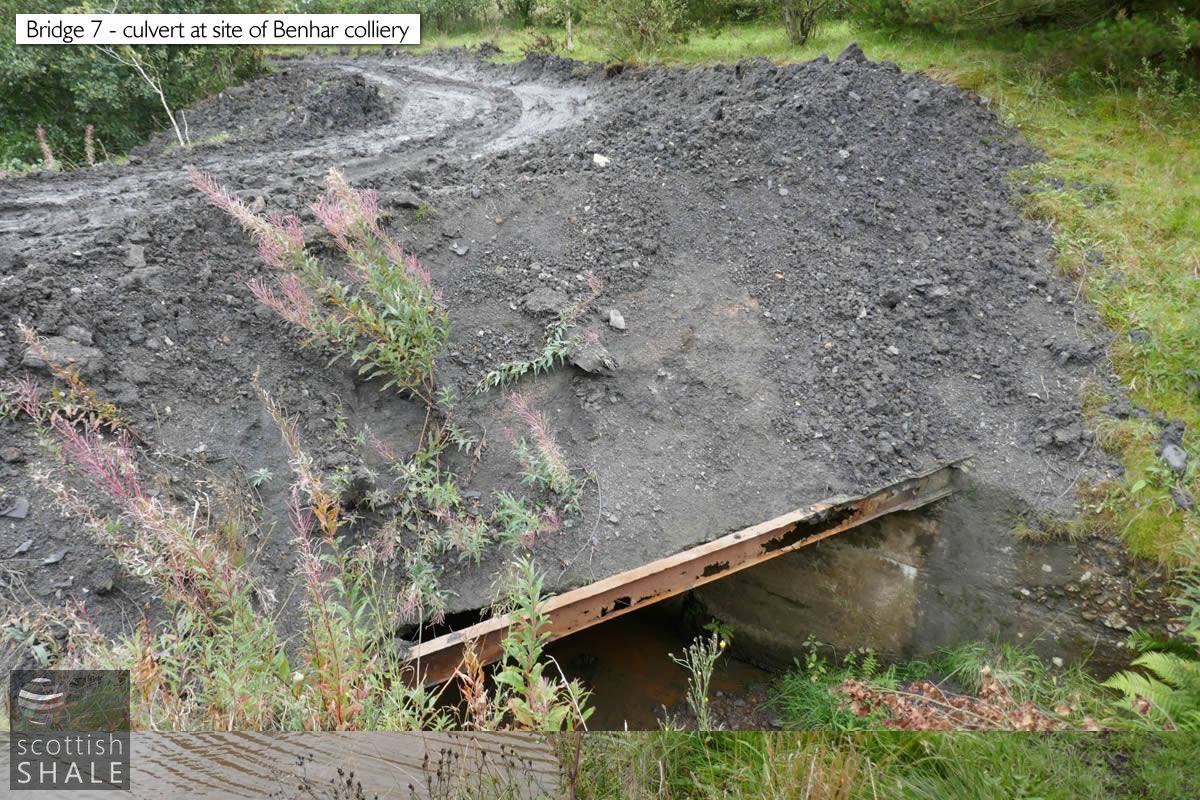 A further, slightly perilous ,crossing of the Almond near Benhar pit. 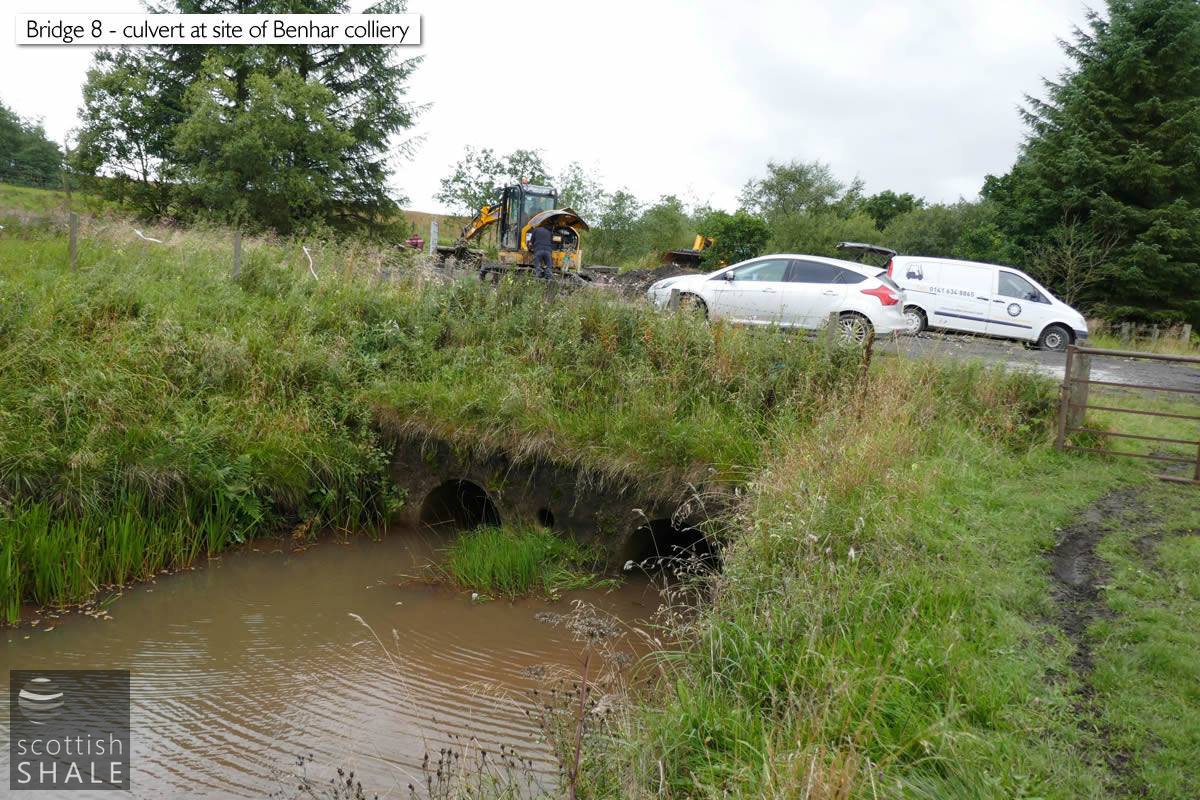 Culvert near Benhar colliery on the new route of the Almond created following opencast working. 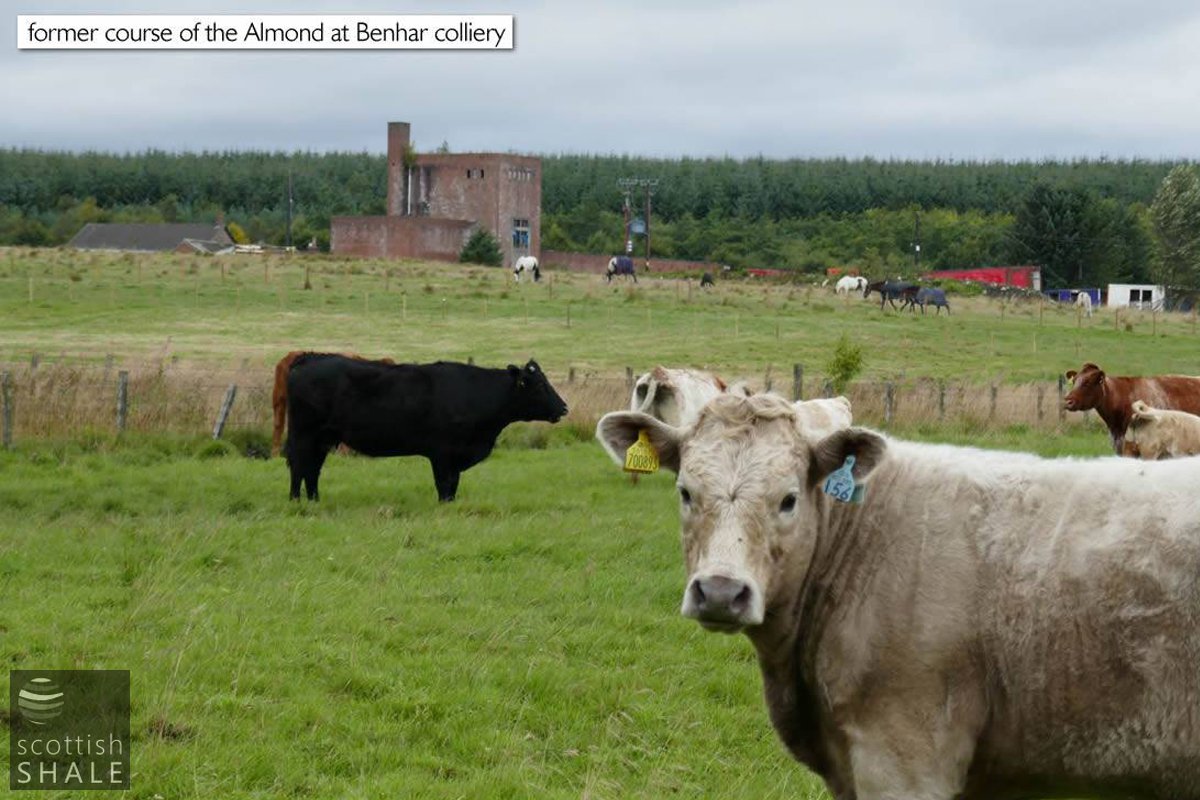 Cows happily graze where the Almond used to flow. With surviving buildings of Benhar colliery in the background.

The other bridge across the Almond linked the substantial farm at Paxtane, near Eastfield, with pasture on the hills to the south. In 1875 William Cruikshank, who farmed Paxtane, took legal action against Robert Addie of Langloan Ironworks, claiming that foul gasses from the burning of ironstone at the Eastfield ironstone pits, immediately west of the farm, had injured both summer and winter pasture and the hay crop. Cruikshank also operated the old Harthill flax mill, using the power of the Almond to thresh cereal crops. It was also stated in court that sediment and debris from ironstone working had choked the mill dam and water courses. Some of the old flax mill buildings survived into the 1960's, and are still commemorated in modern street names. 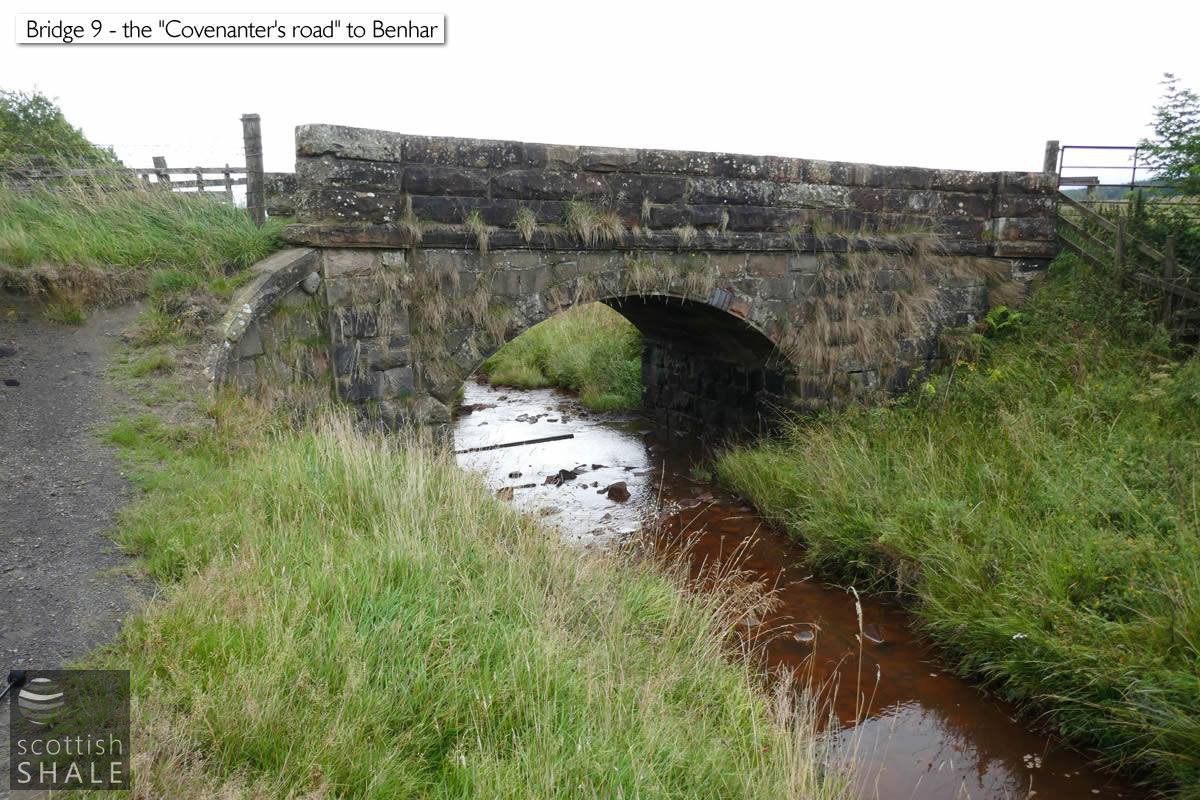 Bridge across the iron-stained Almond, leading to the site of Benhar farm and onwards to the memorial at Pedens Place. The bridge was probably built c.1862 in association with construction of the Monkland Railway branch to Shotts. 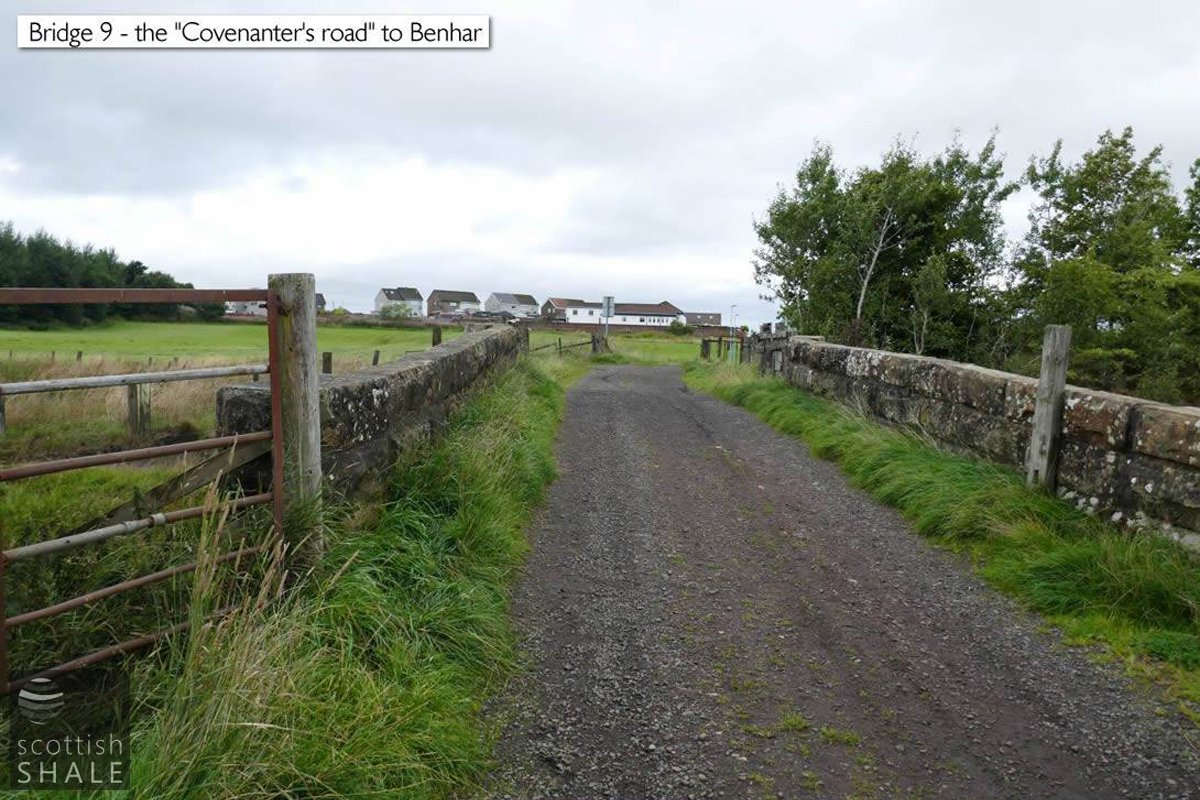 River bridge with site of railway bridge beyond, looking north towards Covenantor road in Easfield. 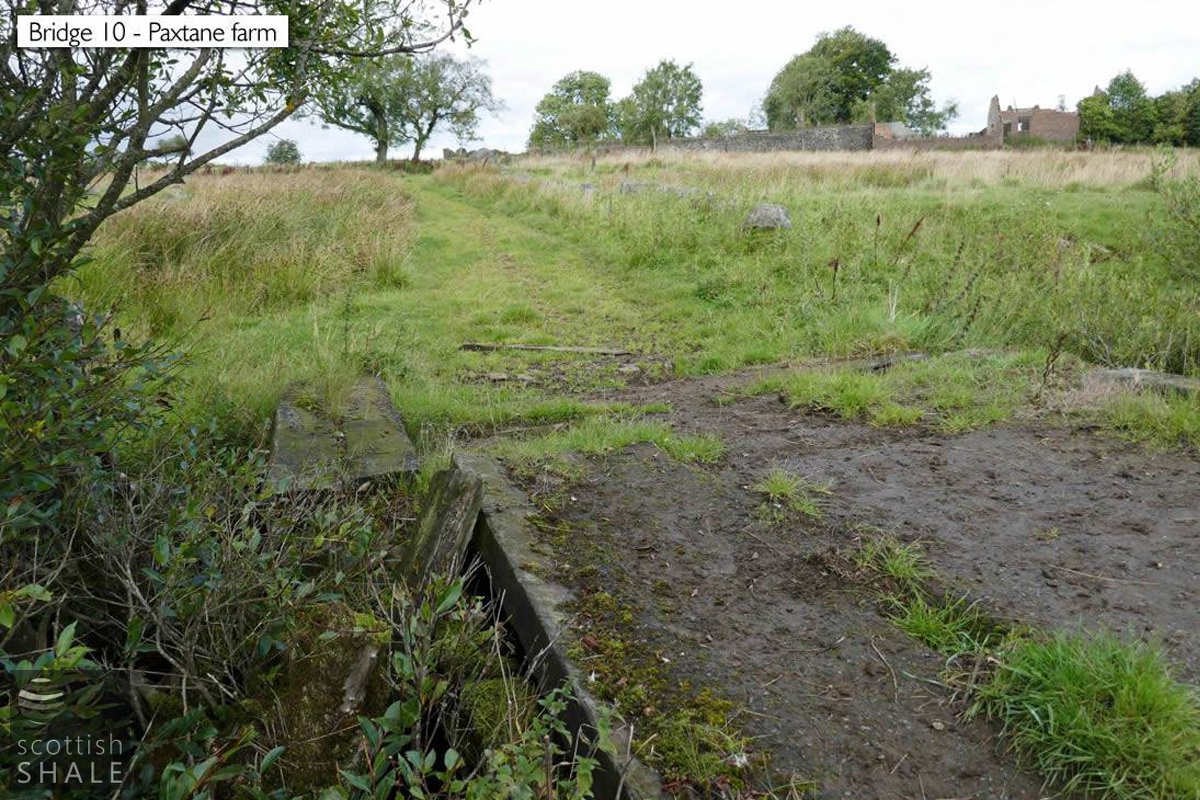 Bridge at Paxtane, with the ruins of Paxtane farm in the distance. 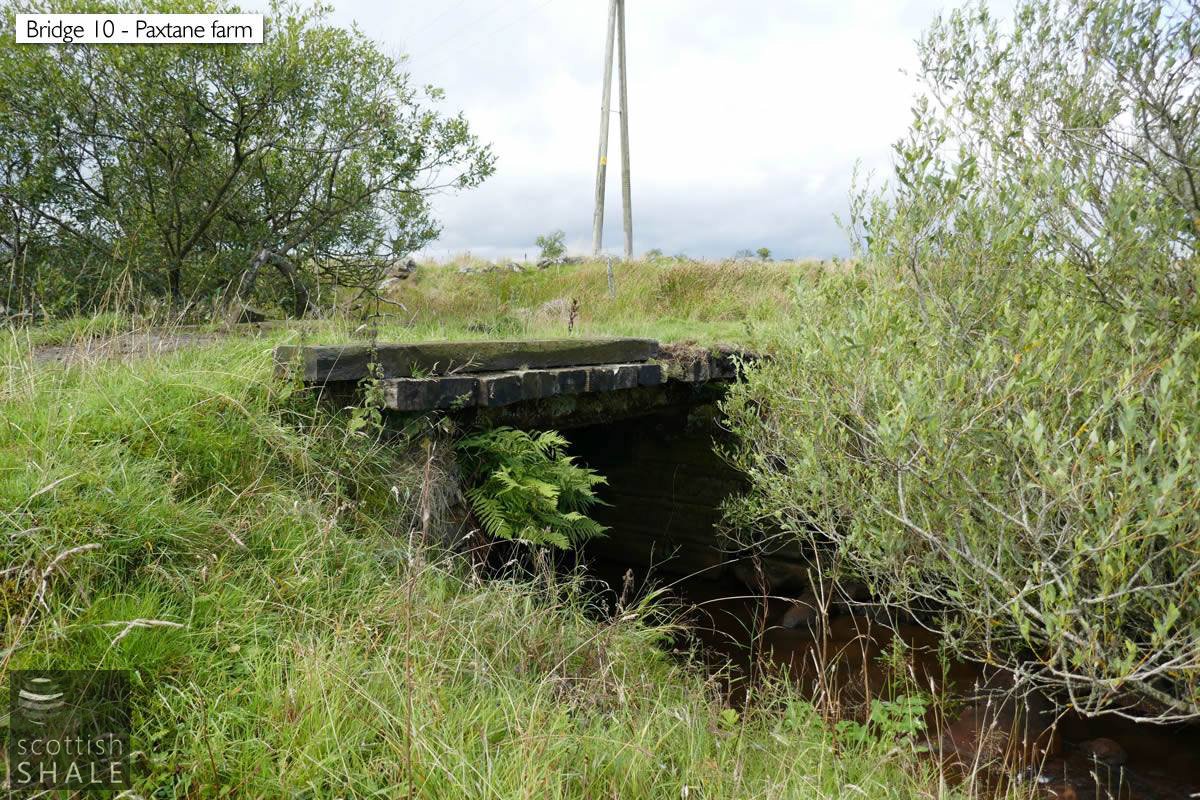 The farm bridge at Paxtane. 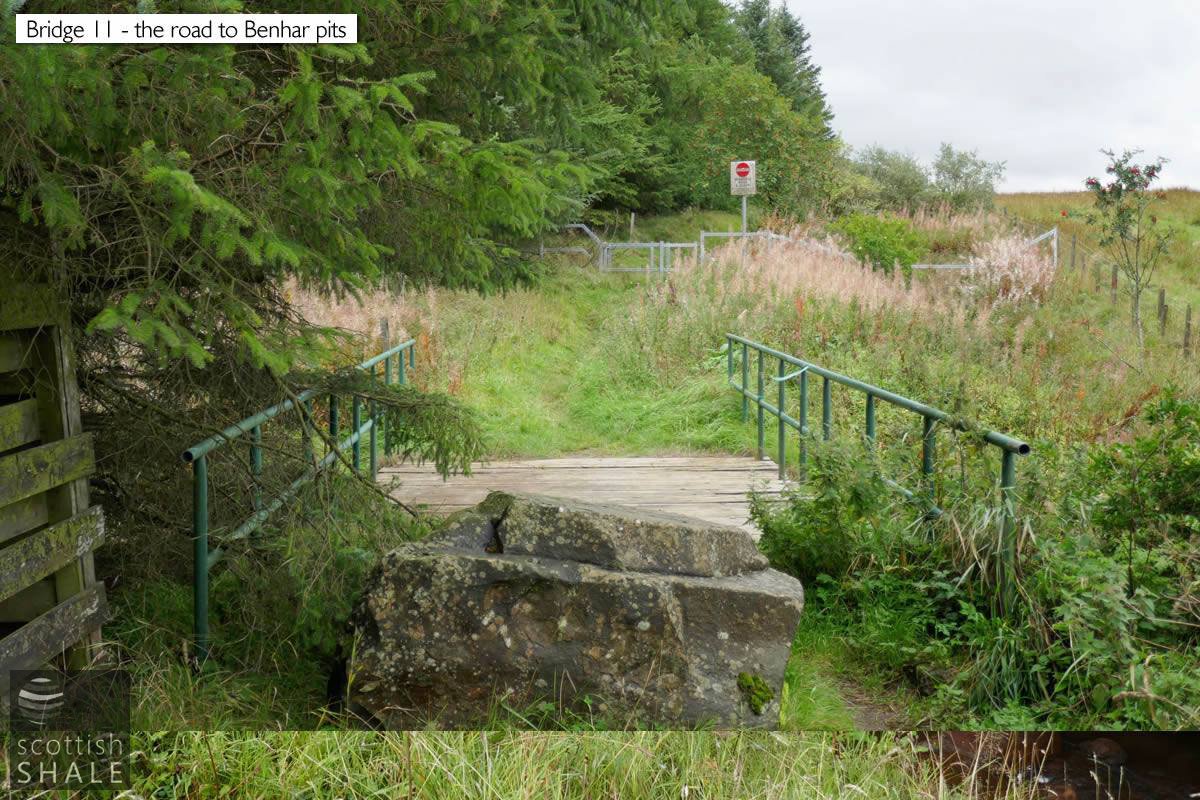 The former coal road to the Benhar pits, leading from Sidehead road in Harthill. 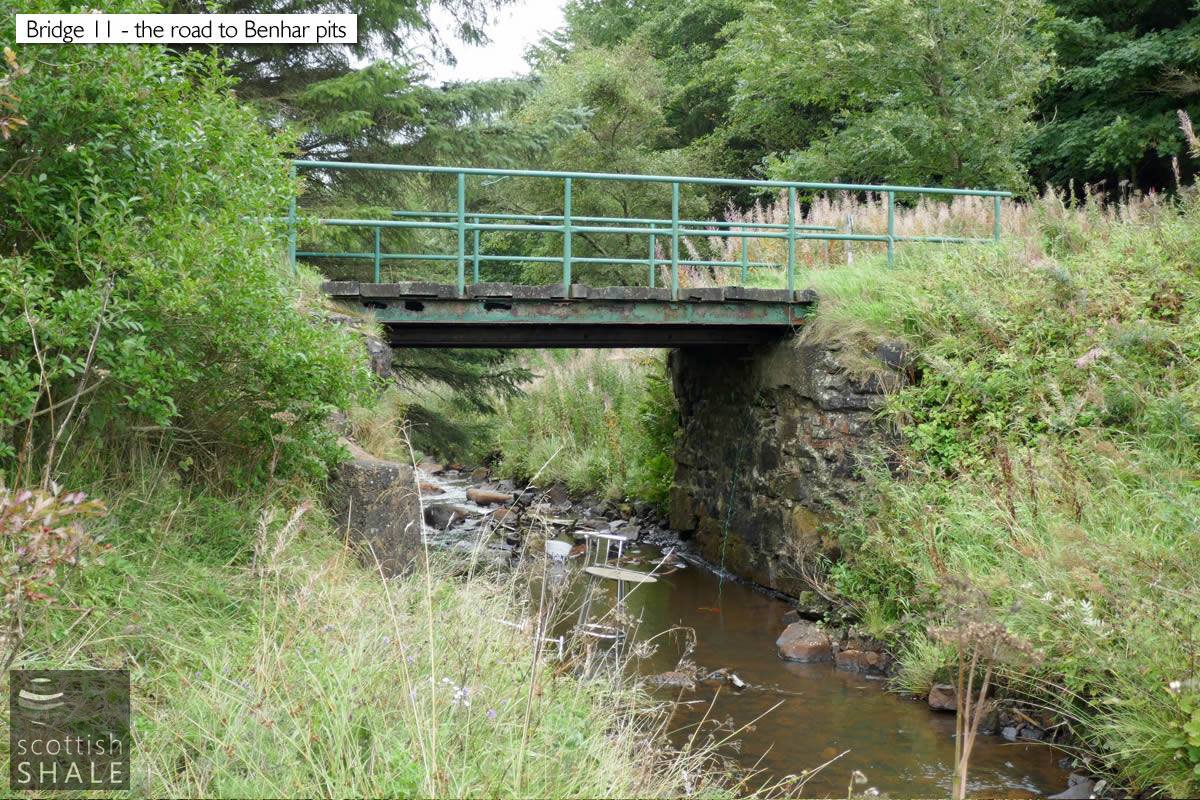 The coal road bridge at Harthill, with interesting use of occassional furniture. 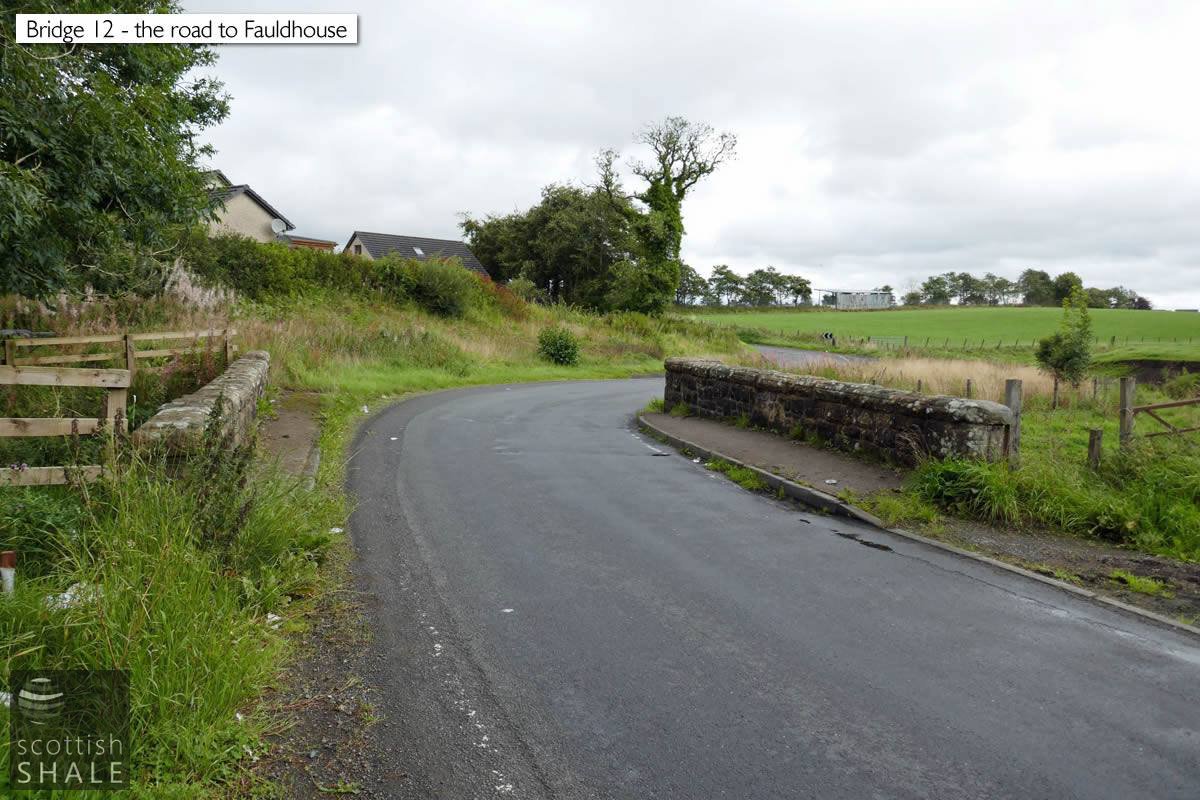 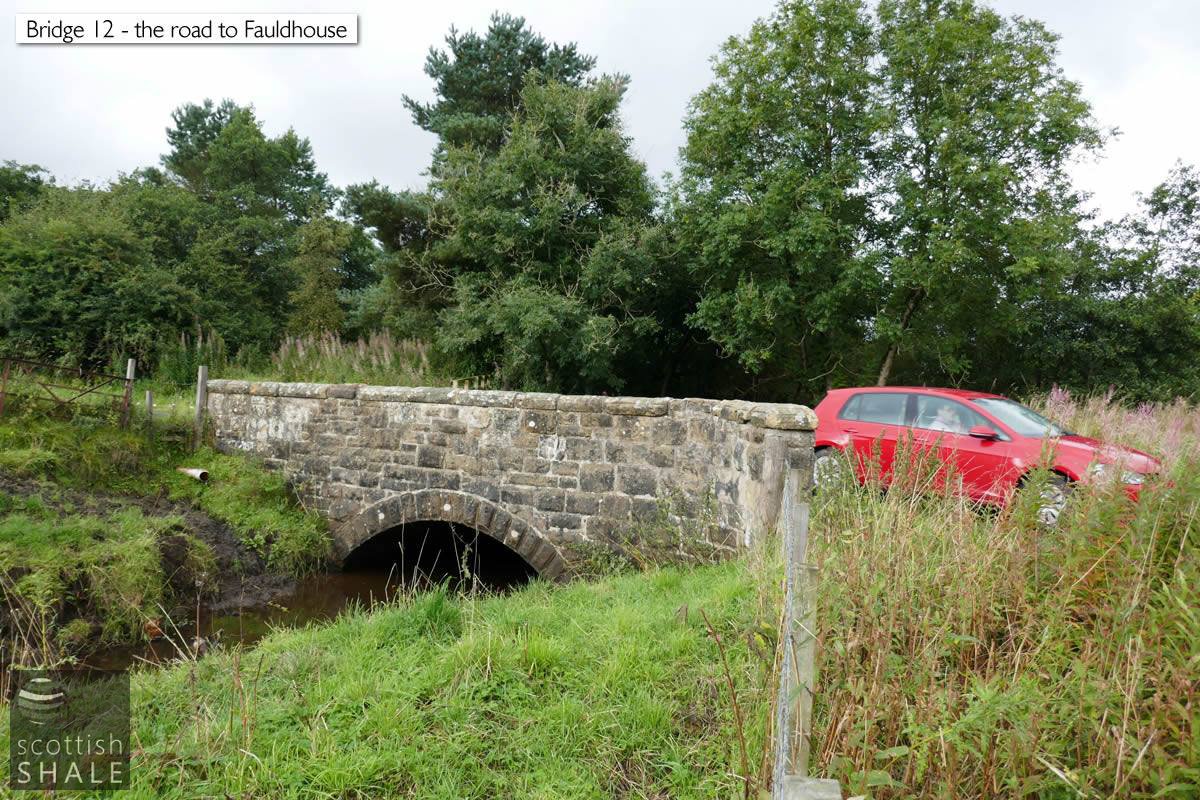 The fine and solid stone bridge carrying the road from Harthill to Fauldhouse near Roughsyke. A kingfisher flew along the river and beneath the bridge just seconds after this photo was taken. 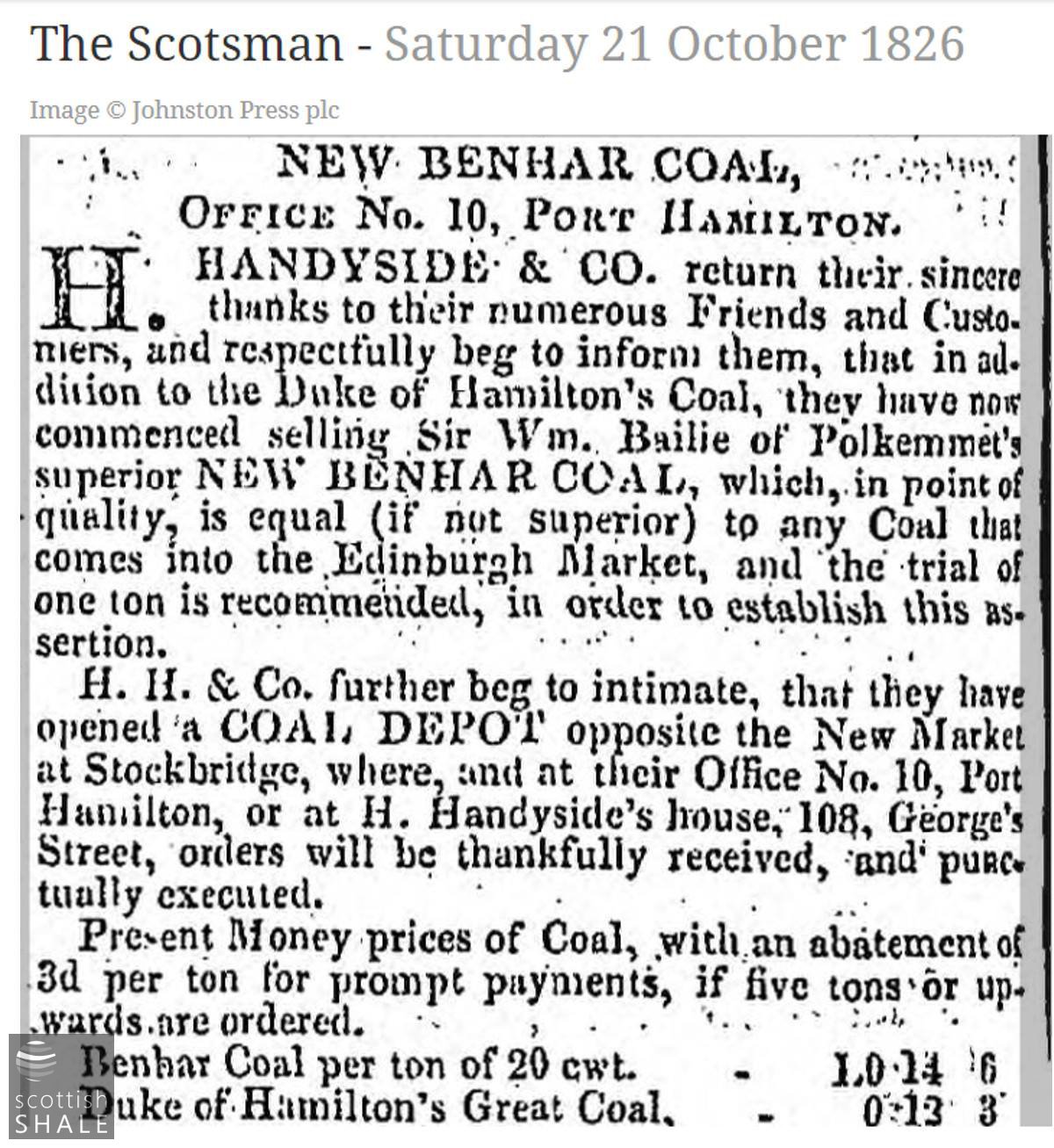 The Duke of Hamilton's Benhar coal had a long established reputation for quality when this advertisment of 1826 was published for coal mined on Sir William Bailie's neighbouring estate of Polkemmet. 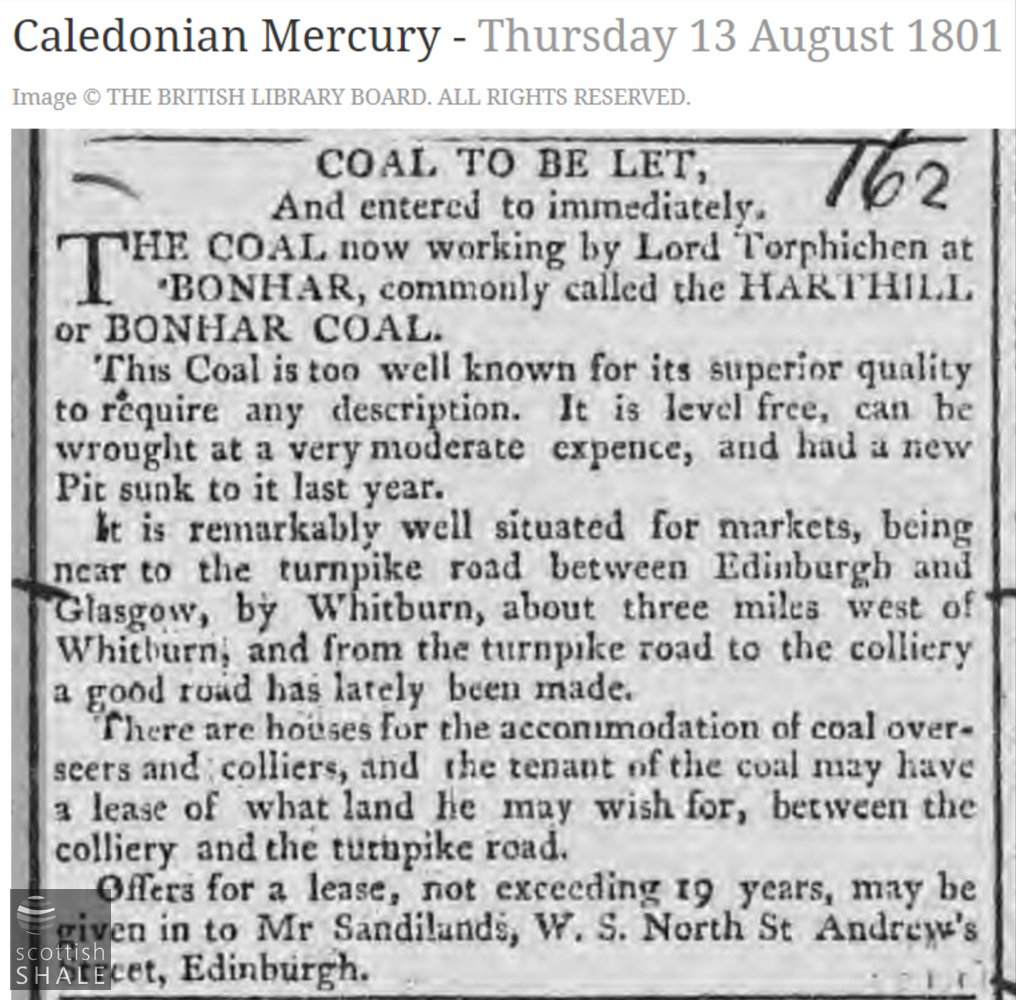 "A good road has lately been made". Early papers often refer to Bonhar rather than Benhar.

The area around the last Benhar colliery, closed 1962, showing the later diversion of the Almond.