Bridges on the Almond in the Whitburn area 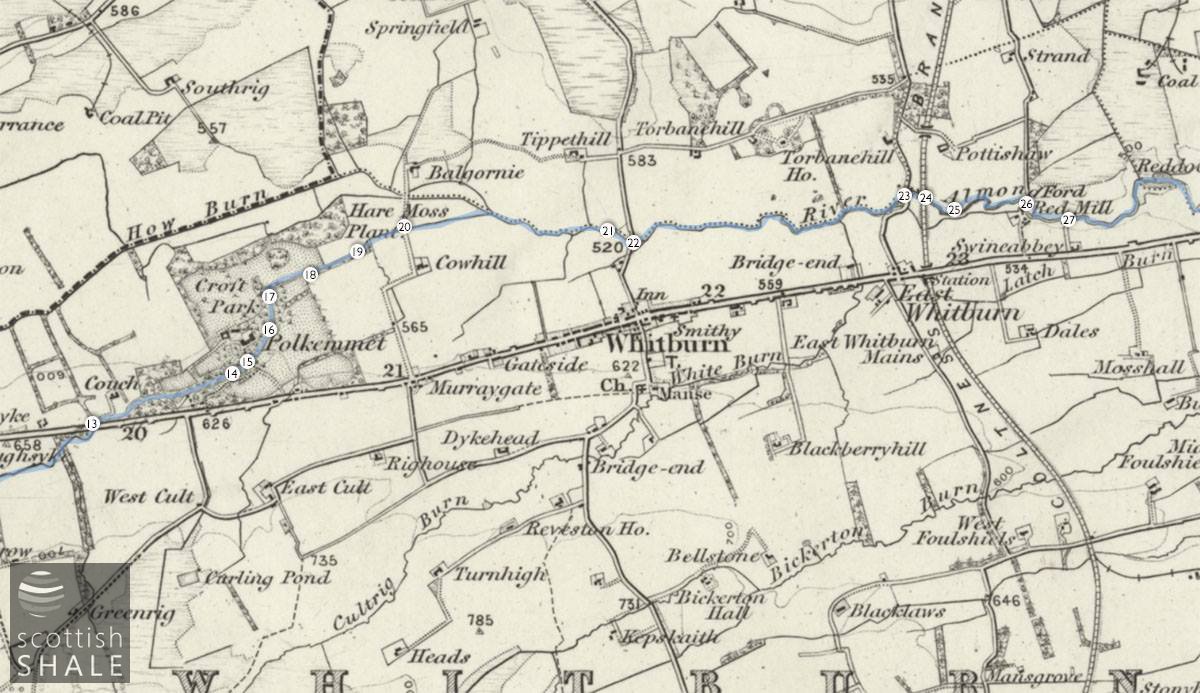 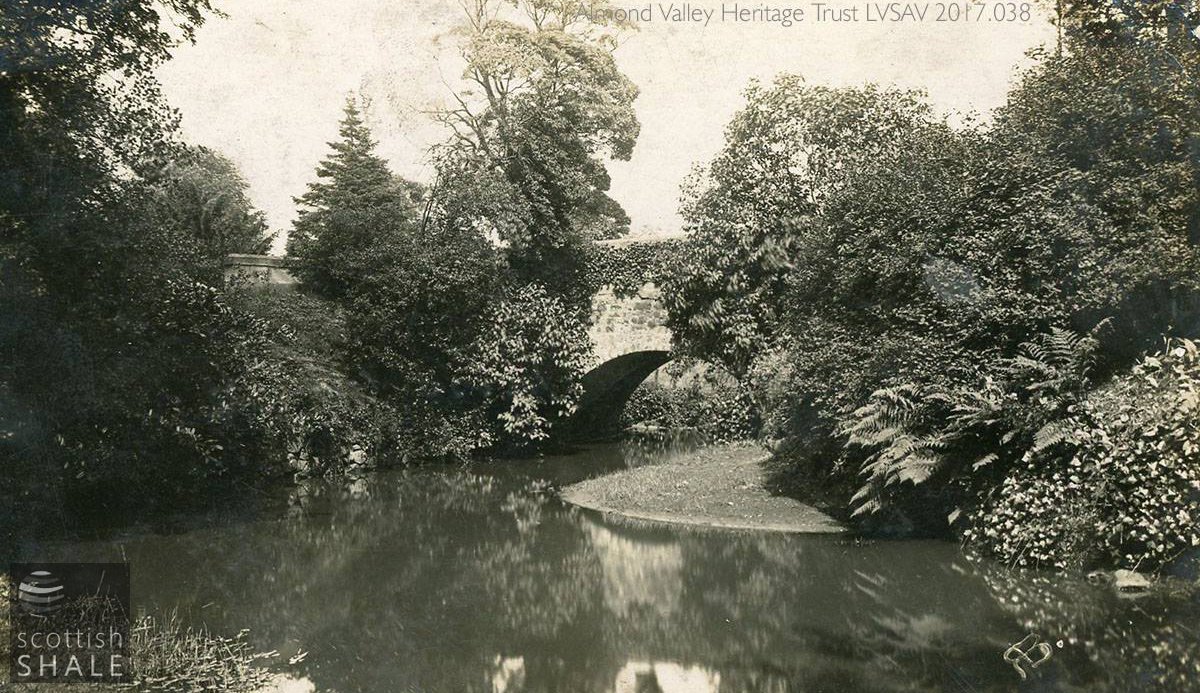 Bridge 15 - the approach to Polkemmet House, romantically clad in ferns and ivy.

From its source in the boggy uplands of Lanarkshire, the River Almond flowed between coal mines and ironstone pits for over two miles before crossing into West Lothian.

The first major bridge within the county carried the great Edinburgh to Glasgow turnpike road across the Almond at a site close to Couch Farm. The original bridge, probably constructed in the mid 18th century, suffered considerably from mining subsidence. By 1914, settlement of the ground had caused the parapet walls to collapse and the arch to fracture in a number of places. A watchman had to be stationed around the clock to monitor further changes to the fragile bridge until a temporary wooden structure could be constructed, and later replaced by a new steel bridge. This structure seems to have had a short life, as in the late 1920’s the A8 “Great Arterial Road” from Edinburgh to Glasgow was constructed following the route of the old road. The Almond was conducted in twin concrete culverts running obliquely beneath the six-lane highway.

The Almond then flows through the wooded policies of Polkemmet estate. Carriages to and from the great house once crossed the Almond on two substantial stone bridges, picturesquely clad in foliage and the subject of many picture postcards. Since 1978, when the estate came into public ownership as a country park and golf range, a number of footbridges have been constructed across the river for the benefit of golfers and woodland explorers. 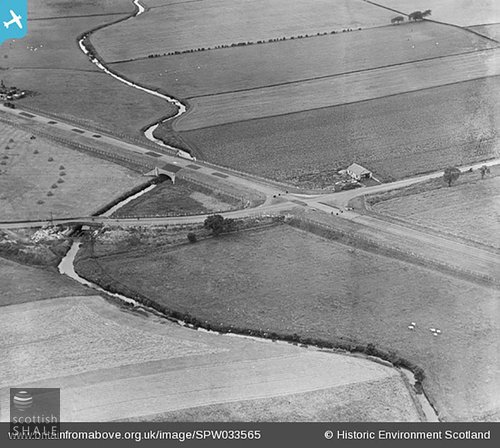 The Almond is next crossed by the M8, running unnoticed through two unassuming concrete culverts. The route of the river was further diverted with construction of the new junction 4a Heartlands interchange in 2013, during which a new culvert beneath the access road to Balgornie farm was installed. There was once a ford and lightweight wooden footbridge across the Almond at this point. In 1892 the county roads surveyor reported that the wooden decking of the bridge was in a poor condition and would be replaced by concrete, and two years later noted that the bridge on the Cowhill and Balgornie road had “given way owing to being used for traction engine purposes”. It seems to have been some years before a proper bridge was built at that point.

Half a mile downstream to the east, the Almond passes once again beneath the A8 “Great Arterial Road” close to the junction with the Whitburn to Armadale road and the grand art-deco roadhouse (now the Royal Regent). This time the road is carried across the river on an elegant arched concrete bridge, with deco-style parapet walls. Construction of the A8 was a visionary project on an enormous scale, equipping Scotland for a new motor age while providing work for thousands through the depressions of the 1920's. This stretch of the A8 was sliced through and abandoned following construction of the M8 “Harthill by-pass” in 1965, and the deck of six-lane bridge now forms an incongruous grassy meadow, hidden behind a screen of mature trees that now grow across the carriageway.

Nearby, the construction of the M8 also saw replacement of narrow and dangerous bridge that once carried the Whitburn to Armadale road over the Almond.

The Almond flows past Whitburn sewage works and a further half a mile downstream is crossed by a fine stone bridge approached on either side by a causeway across the low-lying ground. This carried the main road from East Whitburn to Bathgate, until it was sliced through by construction of the M8. It is now no more than a farm track beyond Drum Cottages. Grass is slow encroaching on the tarmac surface and some abutment walls of the bridge and causeway are now crumbling. The old main road will have provided a fine view of trains rattling across an iron bridge built in 1850 to carry the old Wilsontown, Morningside and Coltness railway across the Almond. Passengers were able to travel from Bathgate to Whitburn and points west until 1930, and the line continued in use for coal and goods traffic until the mid-1960’s when the route was also sliced through by the M8. The iron deck of the bridge has been removed but the abutments survive along with two brick pillars that were presumably constructed at a later date to strengthen the structure.

The river flows on beneath a high bridge carrying the M8, winding through water meadows until it reaches Redmill. Here a road from East Whitburn to Inchcross and Bathgate wove between the mill buildings and then forded the river. There were also stepping stones at this point, and a small footbridge is marked on later maps. Much of this idyllic scene was swept away with construction of the M8 and the A801 link road in the late 1960’s. The concrete abutment wall of the bridge that carries the A801 over the Almond extends for twice the width of the current road. This seems a relic of a grand unfulfilled plan for a dual carriageway linking the M9 with the M8 then continuing southwards towards the M74.

From the A801, motorists might glimpse the next bridge downstream at Swineabbey. The little twin-arch humpback bridge here appears of considerable age, but is falling into sad disrepair. The bridge is shown on Forrest’s map of 1818 but appears only ever to have linked the former Swineabbey farm to a field on the north side of the river. It seems odd that such an elaborate structure never carried a public road, and it remains possible that it played a more significant role in an earlier age before detailed maps. Swineabbey is a place of some antiquity, and was famously the site of murder and skulduggery in 1684, during the time of the Covenanters.

Above right: Aerofilms image taken in 1930, with a small garage on the site that became the Roadhouse / Royal Regent, showing the A8 bridge and bridge on the road from Whitburn to Armadale. 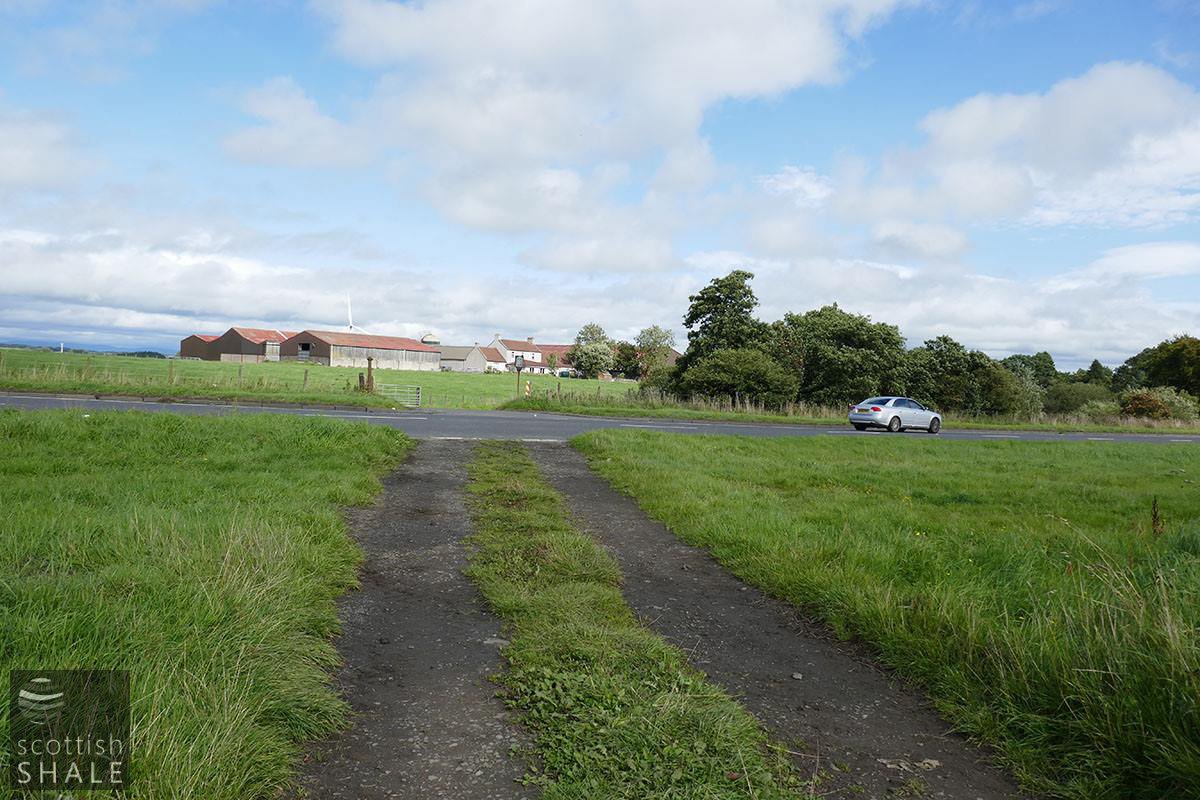 Bridge 13 - Couch Farm. The river flows beneath the former A8. 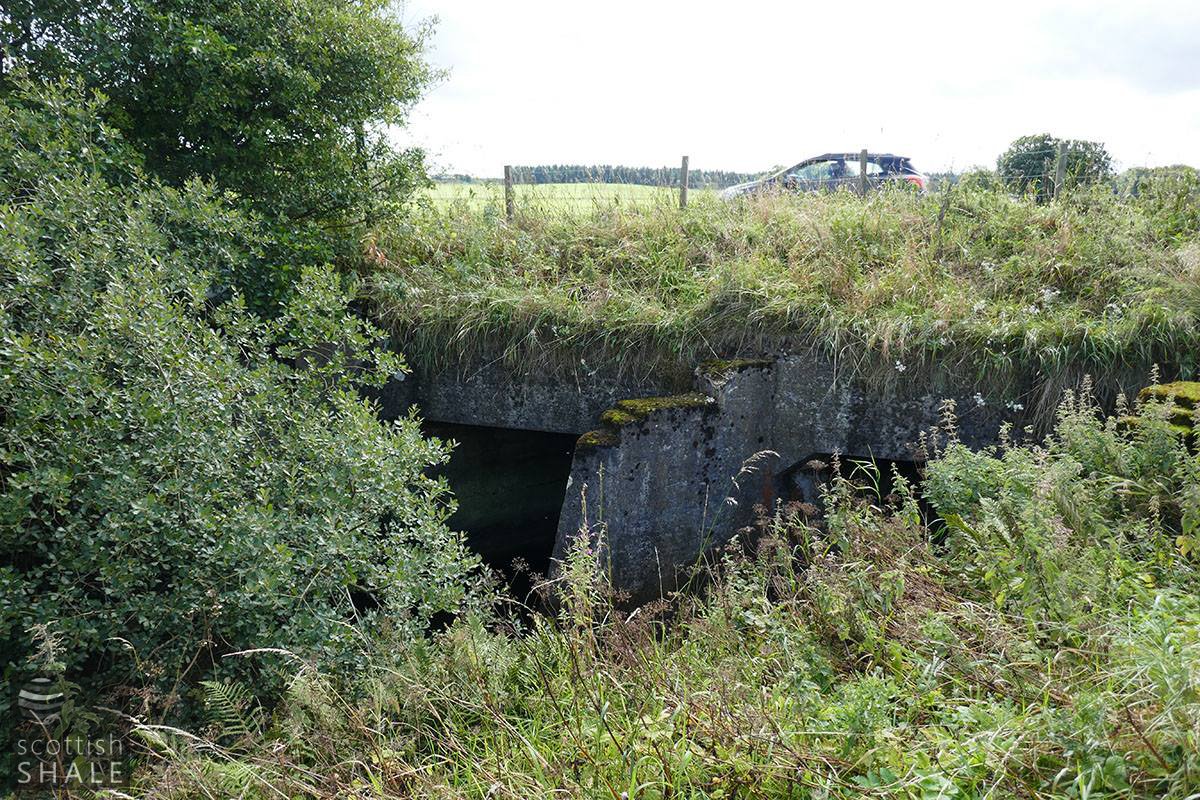 Bridge 13 - Couch Farm. Massive concrete culverts, built in the 1920's, beneath the former A8. 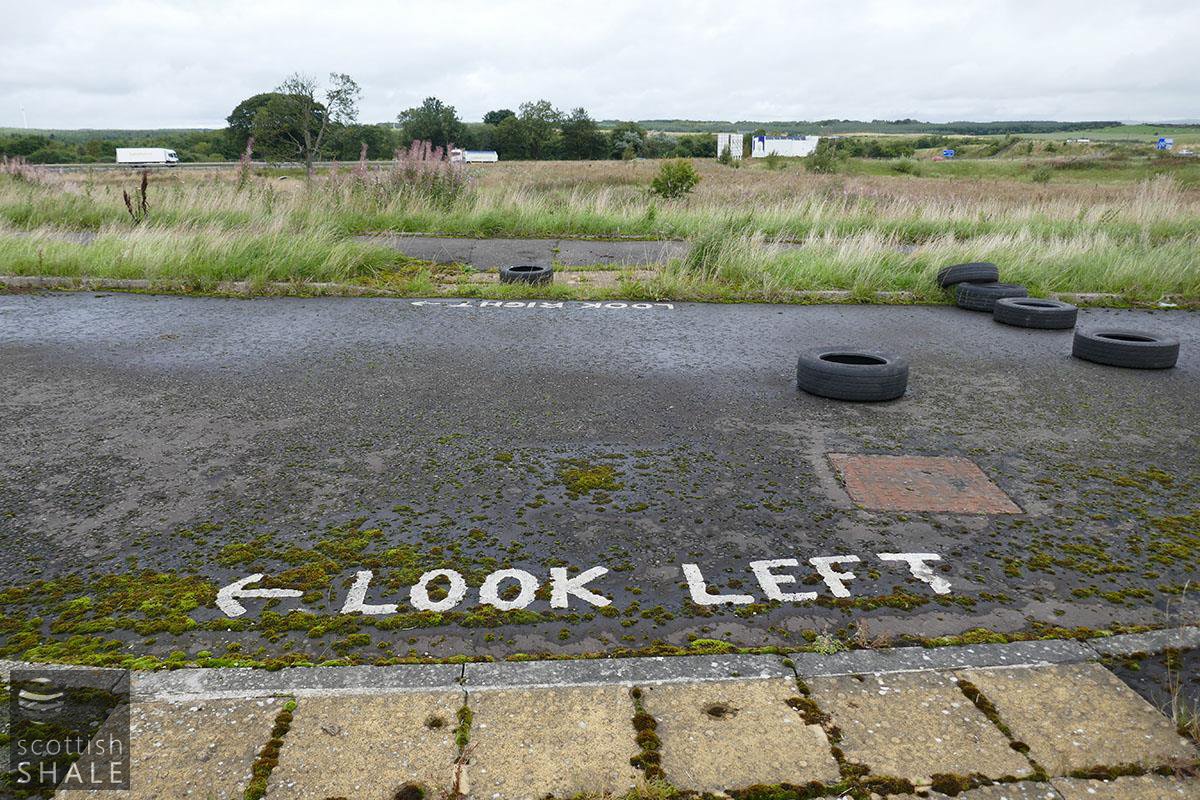 Heartlands, looking towards the culvert beneath the M8.
Road markings, signs and other street furniture have been installed in service roads to industrial units that are still to be built. 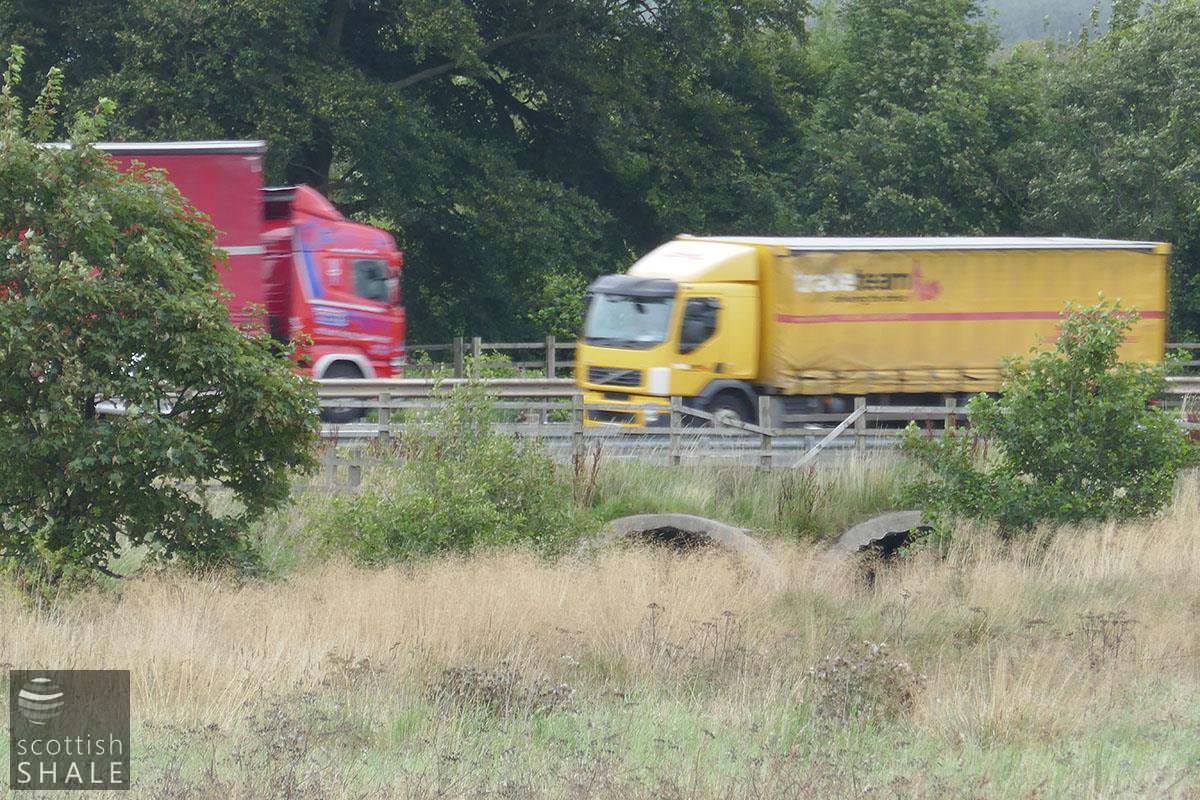 Bridge 19
The Almond passes unseen beneath the M8. 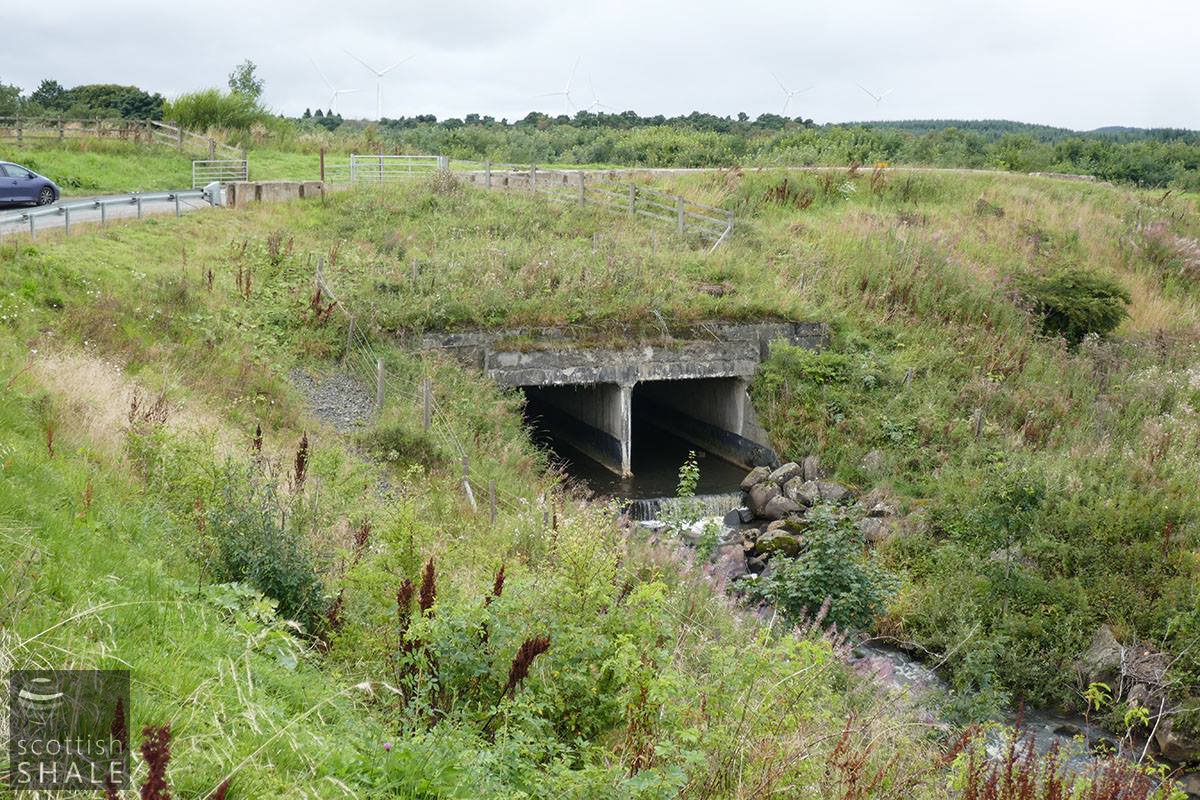 Bridge 20
The road to Balgornie farm. 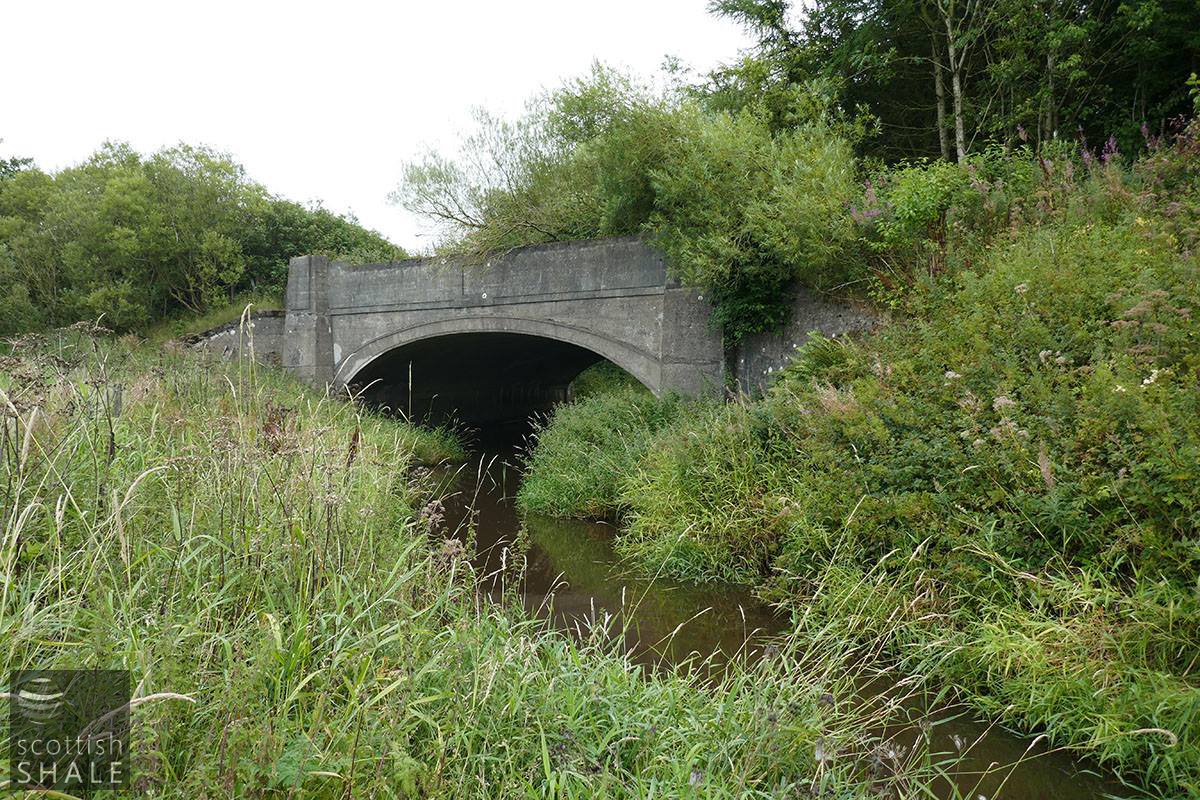 Bridge 21
Deserted Art Deco splendor - the abandoned route of the A8. 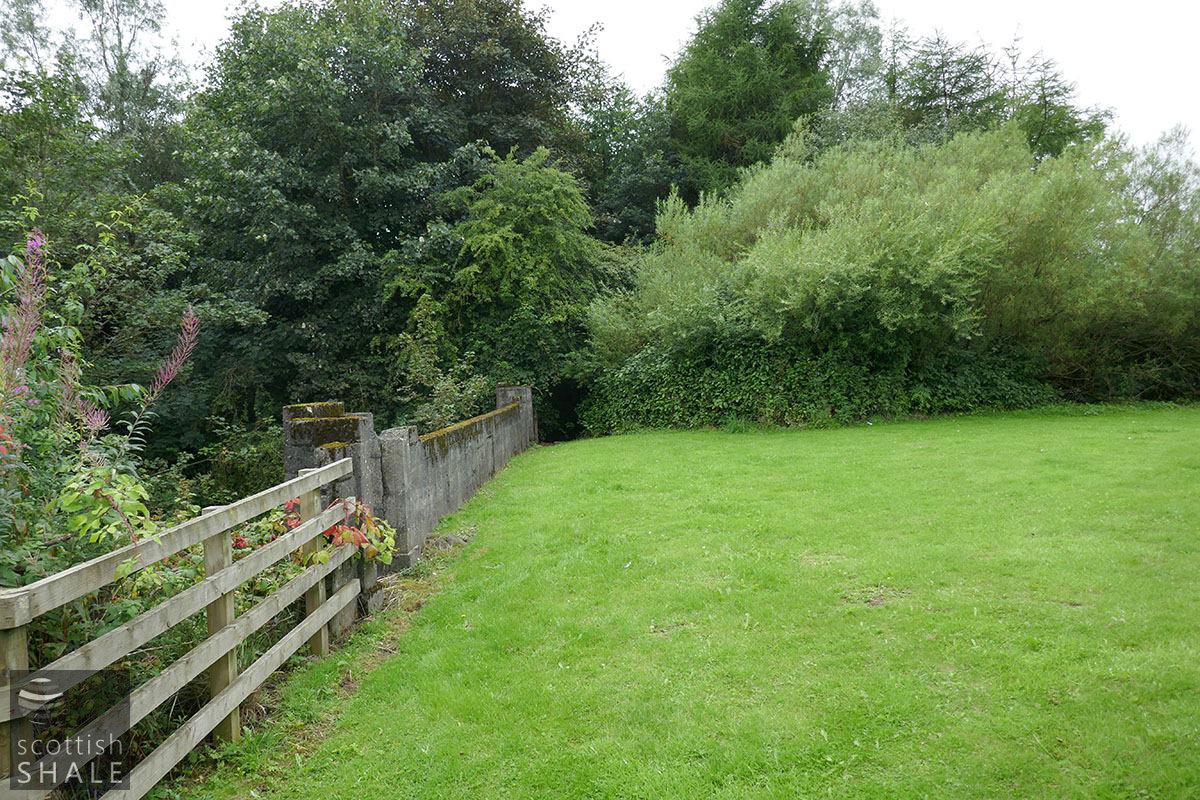 Bridge 21
This lawn was once the main road between Edinburgh and Glasgow. 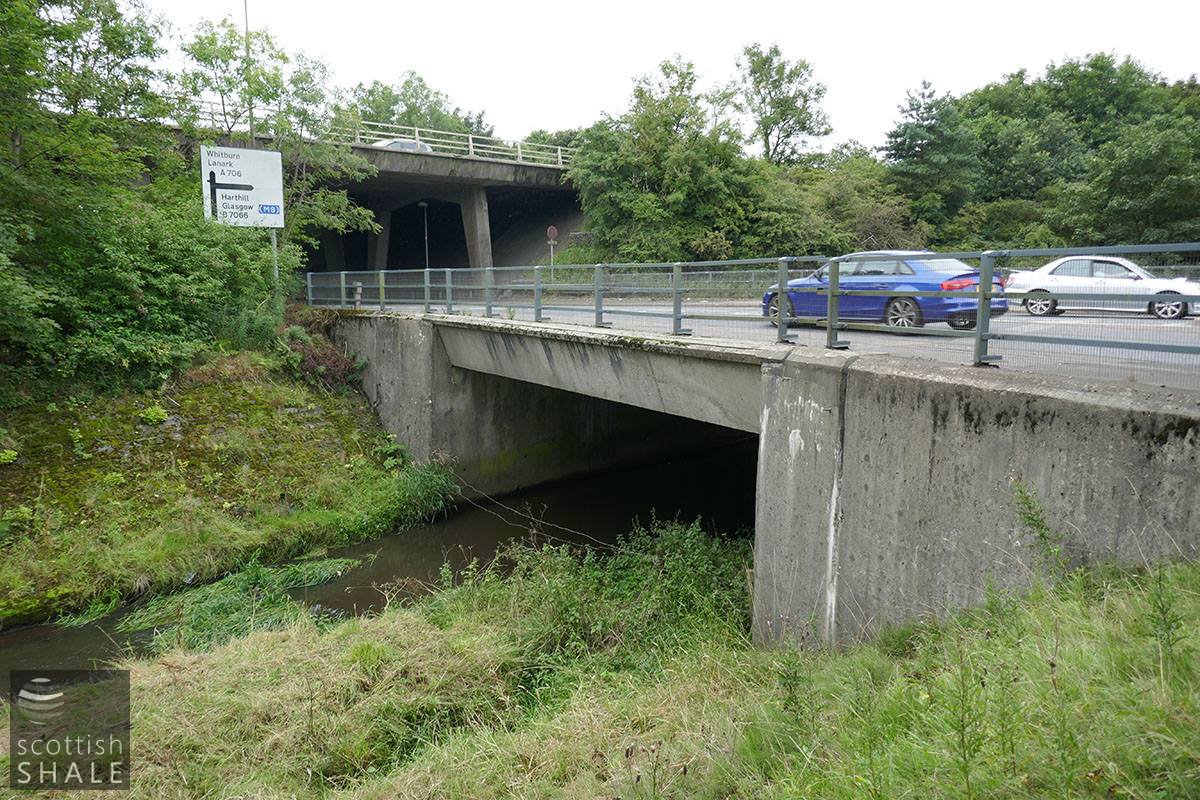 Bridge 22
The current road to Whitburn. 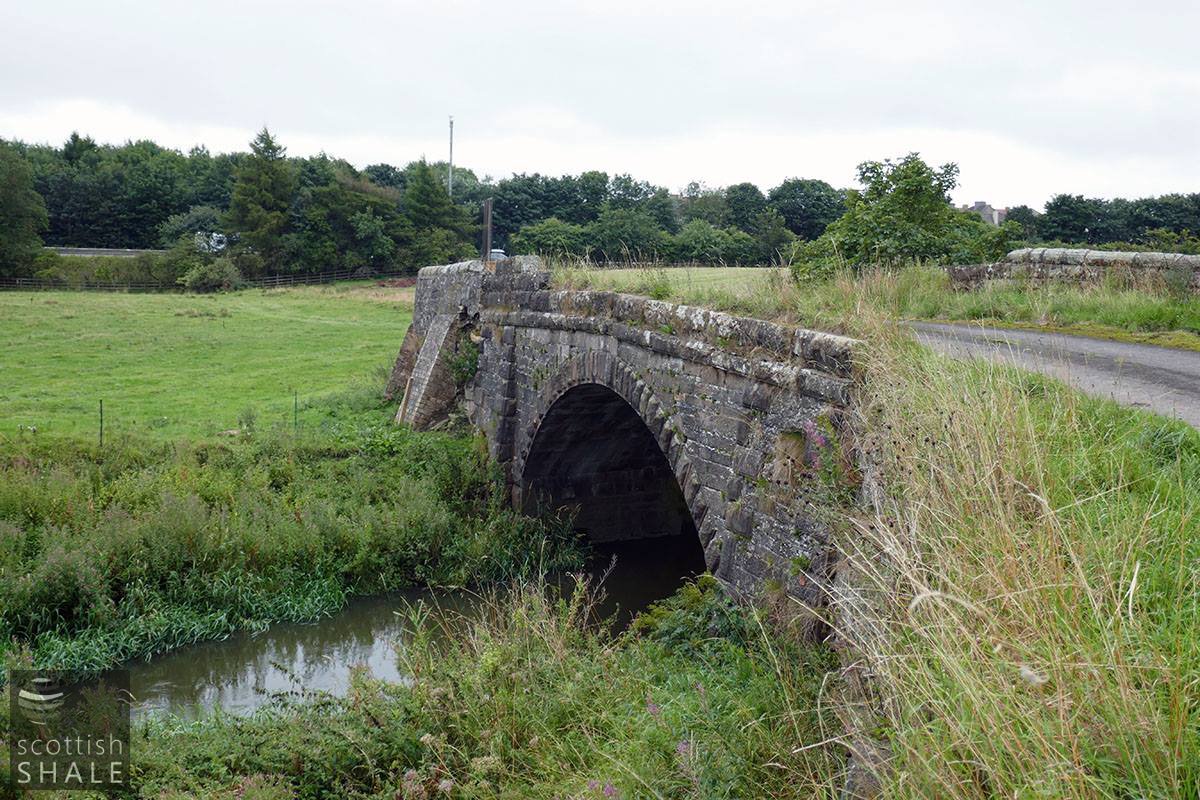 Bridge 23
The old main road between East Whitburn and Bathgate, with a fine bridge slowly decaying. The M8 is in the background. 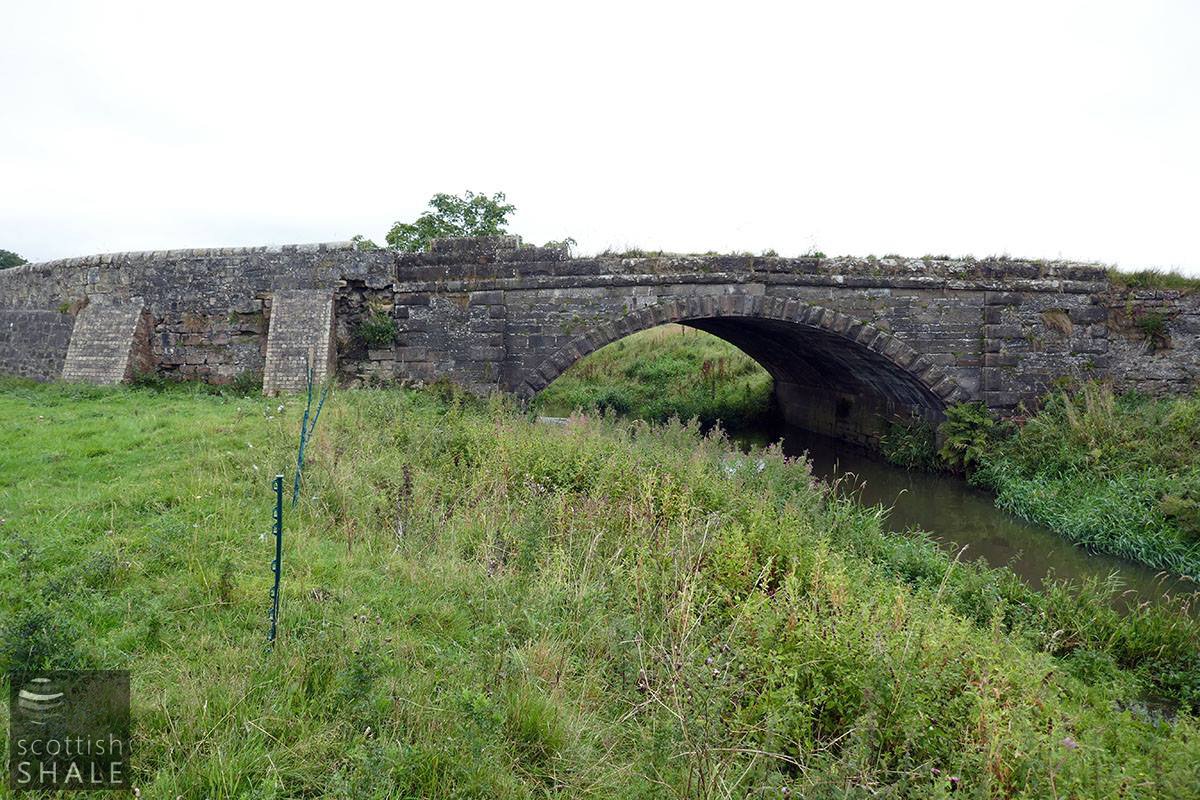 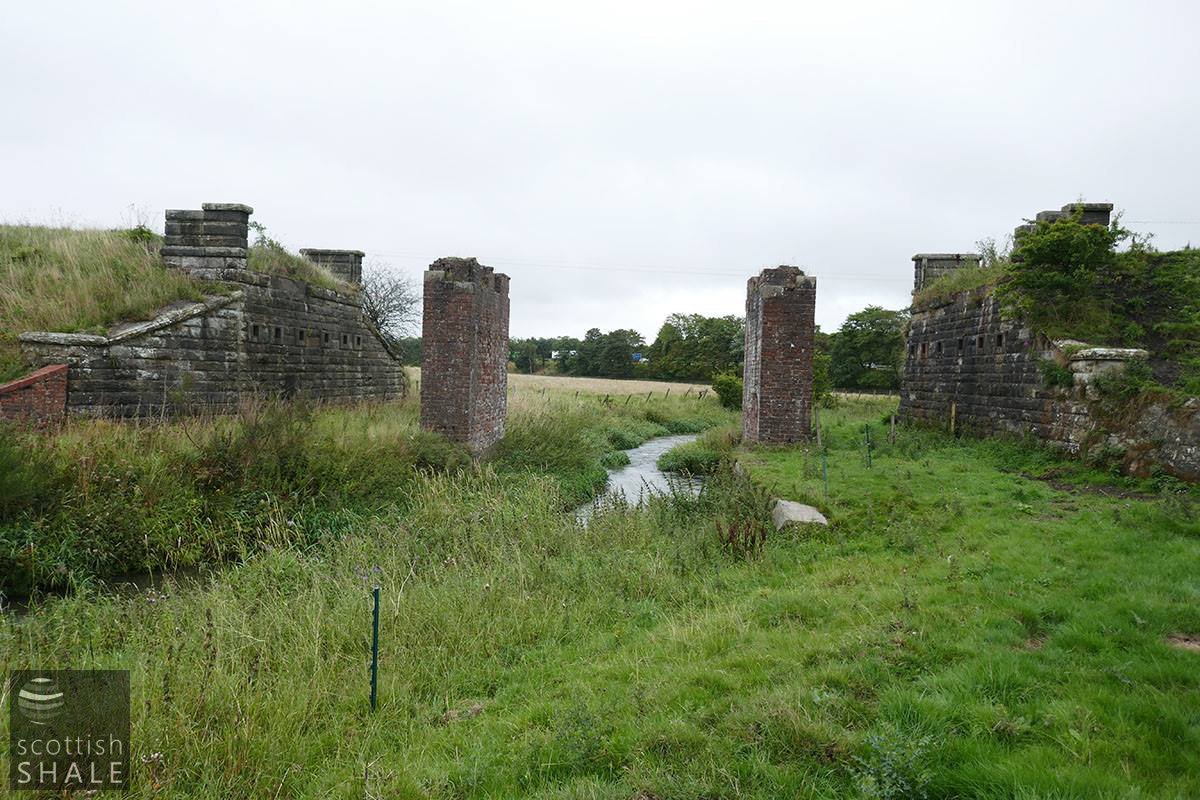 Bridge 24
The Wilsontown, Morningside and Coltness railway, with the M8 beyond. 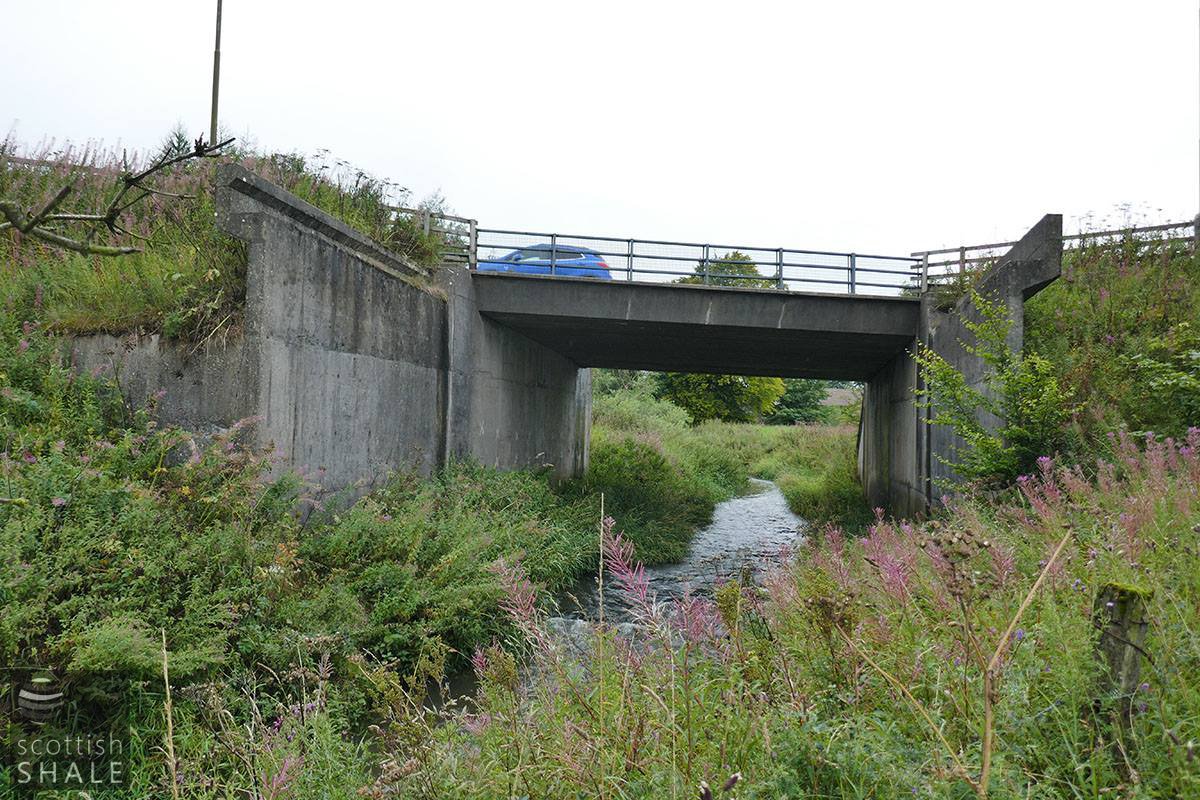 Bridge 26
The A801 crosses the Almond, with concrete abutments that allow for a dual carriageway. 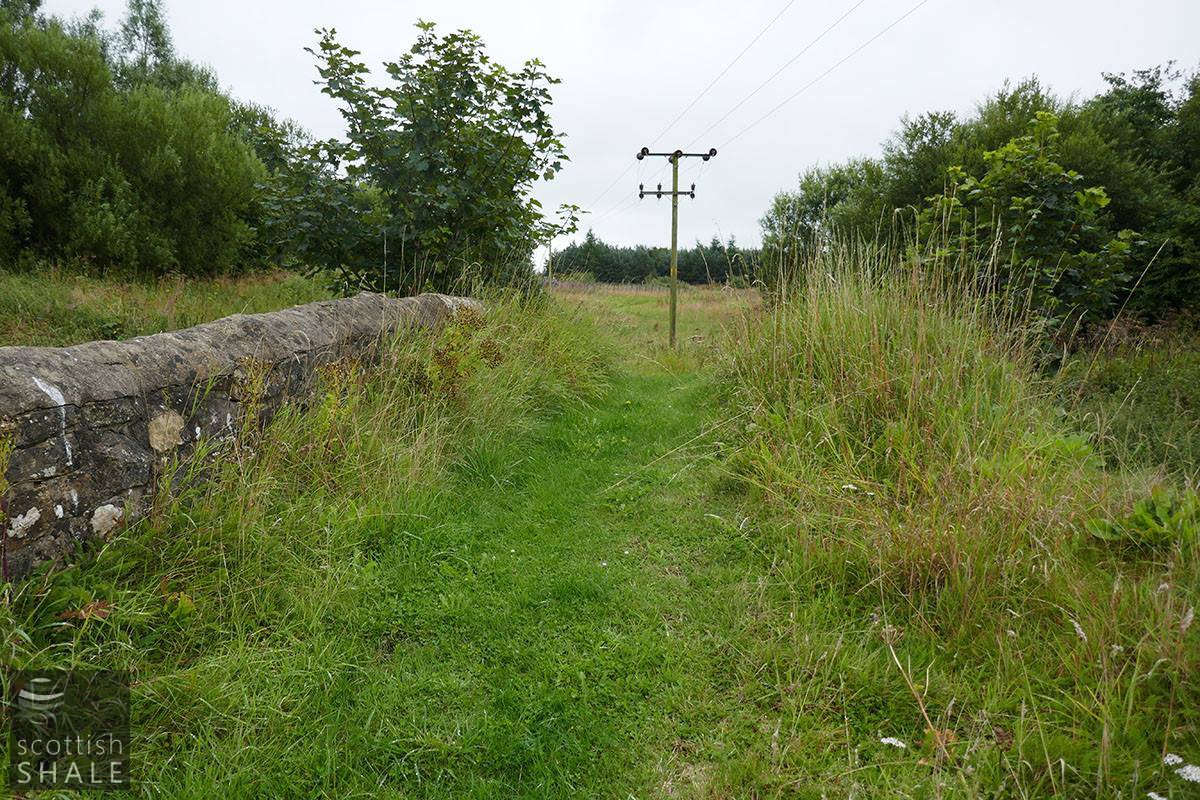 Bridge 23
Not a lot of traffic crosses Swineabbey bridge. 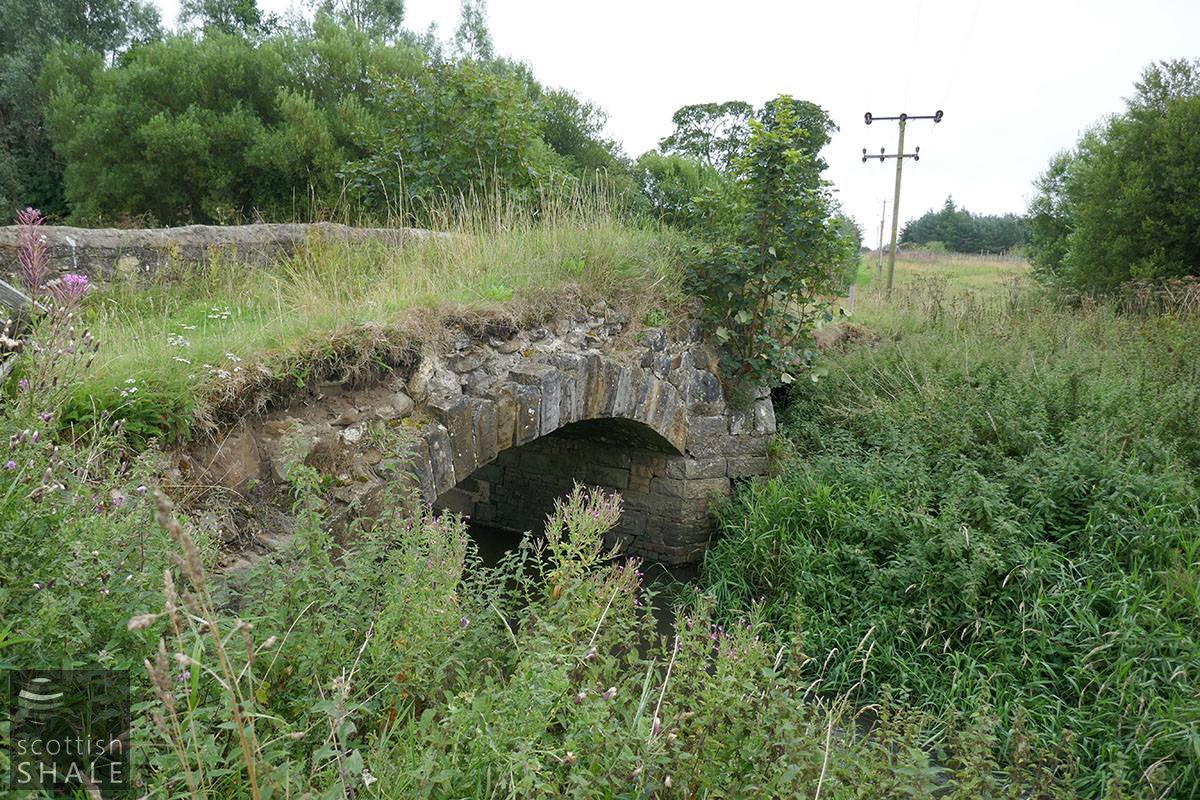 Bridge 27
The twin arches of Swineabbey Bridge. One of the parapet walls has collapsed.