Buckets in the air

The aerial ropeway from Oakbank oil works to the Newfarm mines 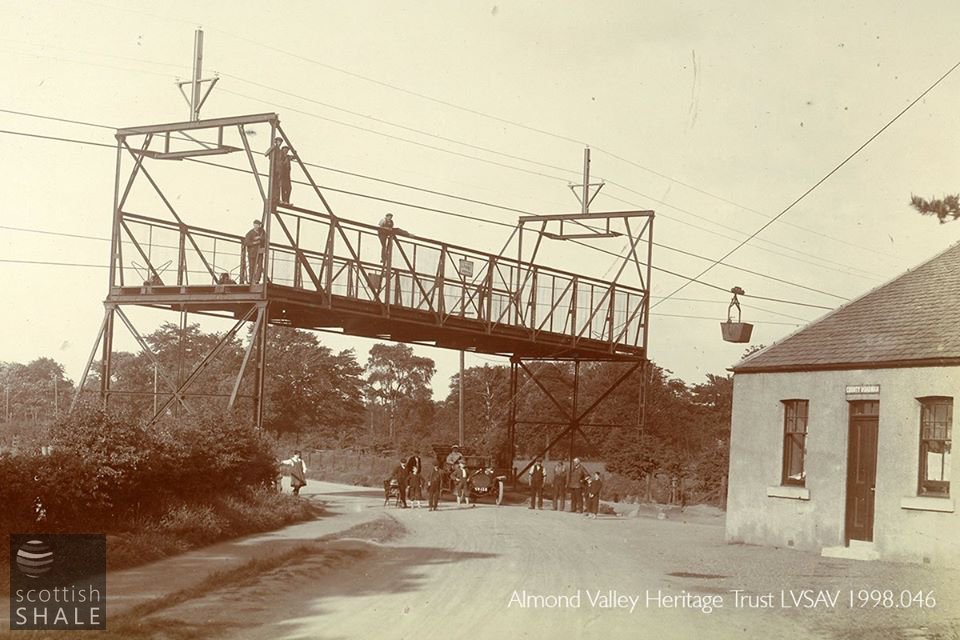 Well know view of the ropeway where it crossed the A71 beside the County roadman's cottage. The German maker's plate is attached to the structure that protected the traffic beneath. 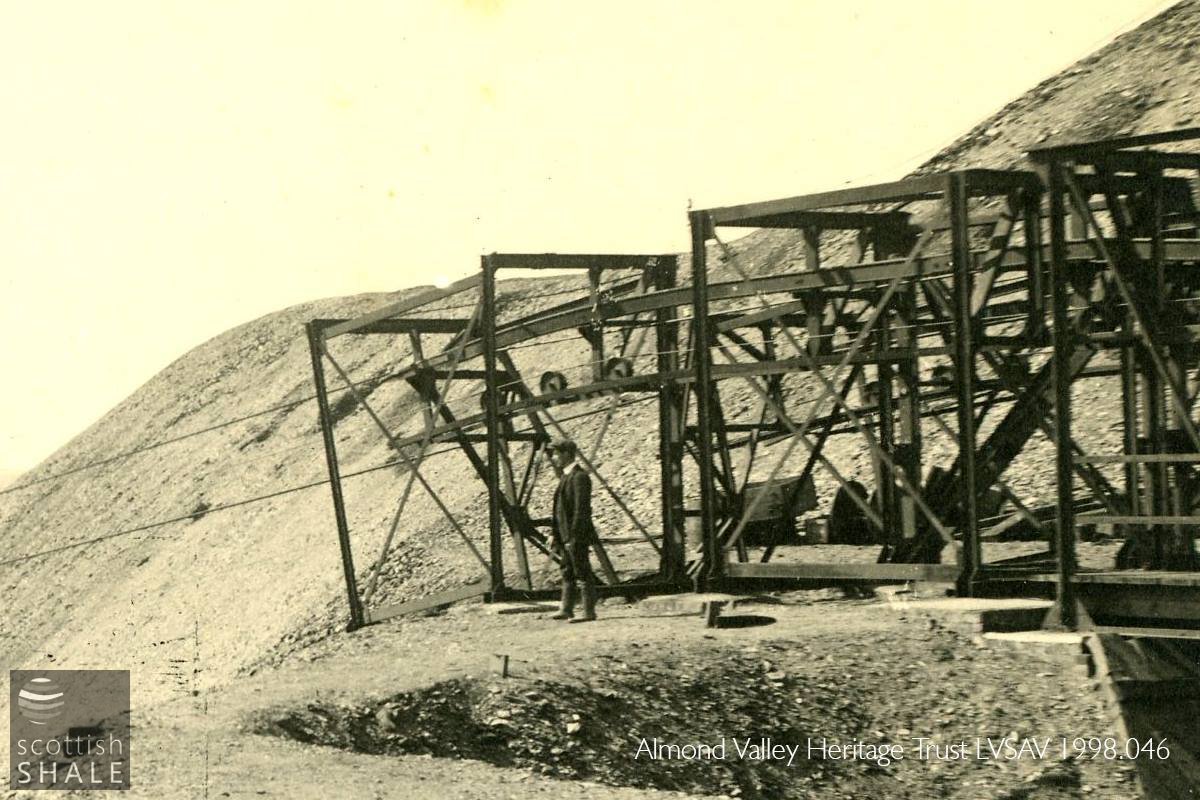 In 1908, after more than forty years of production, the Midcalder shale pits of the Oakbank oil company were nearing exhaustion. The company made plans to close their Oakbank crude oil works and transfer all crude oil activities to their new Niddry Castle works. Prospecting activities then discovered promising new reserves of oil shale, buried less than a mile to the west of Oakbank beneath the lands of Newfarm. Unfortunately, the new shale field was separated from the works by the wide, steep-sided valley of the Linhouse water, and the channel of the Murieston burn, both of which presented major obstacles to the transport of shale. 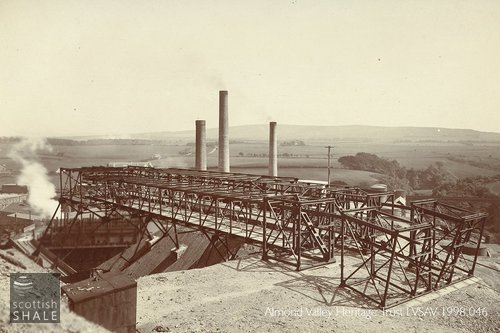 The Oakbank were a very progressive company, always keen to take advantage of the latest technologies. “After prolonged investigation”, they decided to install an aerial ropeway between the mines and the works, in which buckets of shale, suspended from a continuously moving overhead wire, were carried on pylons across fields and valleys. Aerial ropeways were still a novelty in Britain at that time, although more common in rugged terrain overseas. Ropeways used a similar technology to cable cars and chair lifts; a field in which German firms were the market leaders. The order was placed with J. Polig & Co. of Cologne who had recently completed a 21 mile-long ropeway for ironstone mines in Norway.

Oakbank's ropeway ran 1450 yards from block-like loading stations at Newfarm No.3 & 4 mines to large concrete storage bins at the discharge terminal on the bing at Oakbank, close to the shale retorts. The ropeway climbed 190 ft. between the mine and the terminus on the bing; first crossing the A71 near Raw Old Tollhouse, (close to new workman's housing at Dedridge) then passing over the buildings of Glebe farm, where at both points structures were installed to protect those below from any falling materials. The pylons then strode across farmland, spanned the Murieston water, and then crossed, in one impressive span, from a pylon at the lip of the escarpment to another beside the Linhouse water. The route continued across the river, skirting the steep sides of the bing before reaching the discharge station at the oil works terminus. No map is known to survive of the route, but photographs suggest that the ropeway followed a more-or-less straight route. 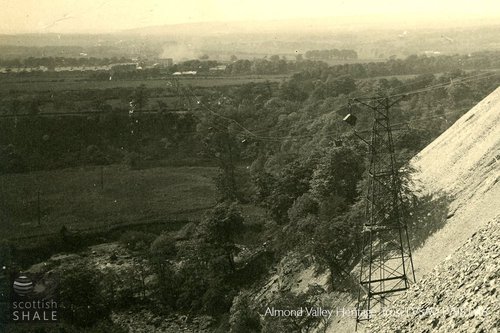 Oil company staff were proud of this feat of engineering, preparing a paper for the Mining Institute of Scotland, publishing an album of images, and presenting illustrated public talks. The ropeway was completed in about 1910, but had a short working life as by 1913 it was reported that “troubled ground” had been encountered in the Newfarm mines, an underground fire occurred there in 1916, and all mining works were abandoned in 1919.

It might be imagined that the ropeway was dismantled at this time, and while no evidence exists, it may have been that components were re-used when a ropeway was later constructed in the Duddingston shale-field.

Today, the houses of Beresford Rise, constructed to house the workforce of the Newfarm mines, provide the most tangible reminder of this history. Residents of these Dedridge rows were later bused to work at the Oakbank Oil Company's new Westwood pit, which for a period supplied Oakbank oil works with shale. This housing was owned by the oil company into the 1960's. The mine site, and the original course of the A71, has been utterly changed with construction of housing for Livingston new town, and some of the route of the ropeway now lies beneath Lizzie Brice's roundabout.

The only area that remains largely unchanged is the bowl of haughland beside the Linhouse water, which was once cultivated land but is now returning to wildwood as part of Almondell and Calderwood country park. Rumours exist that traces of ropeway pylon foundations survive among the bracken and undergrowth, but a January wander, guided by old photographs, failed to find anything conclusive.

Above right: The terminus station of Oakbank bing, showing storage bin and retorts below.

Above left: Close up showing route across the Linhouse water, with mine terminus and Dedridge rows in the distance. 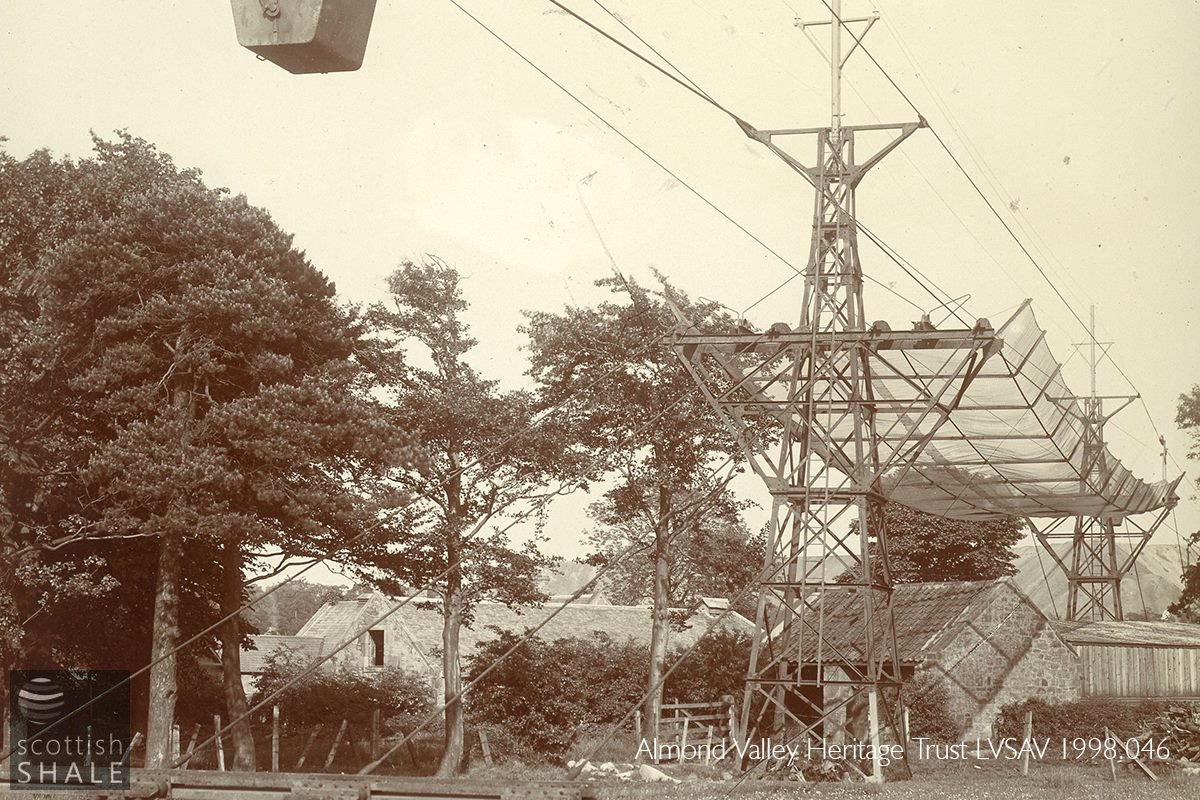 Protective netting where the ropeway passed over Glebe farm. 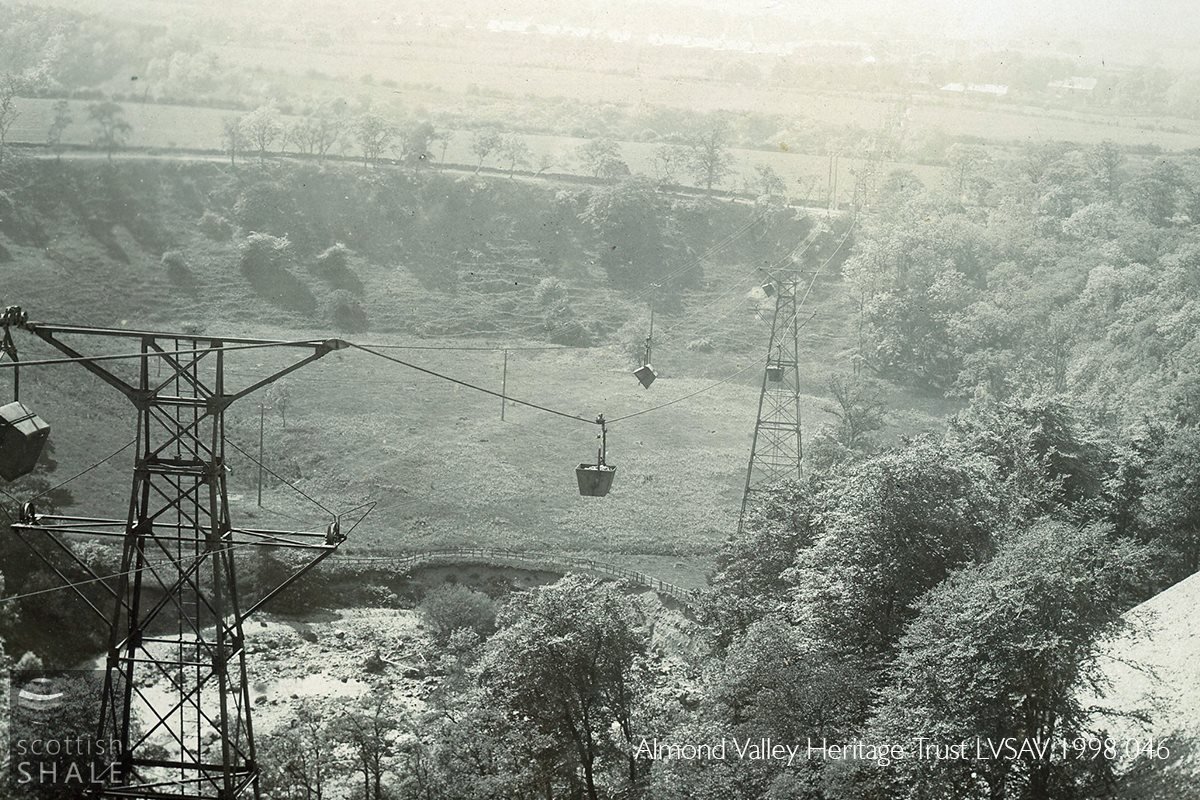 View from Oakbank bing with Linhouse water in the foreground and Dedridge cottages in the distance. 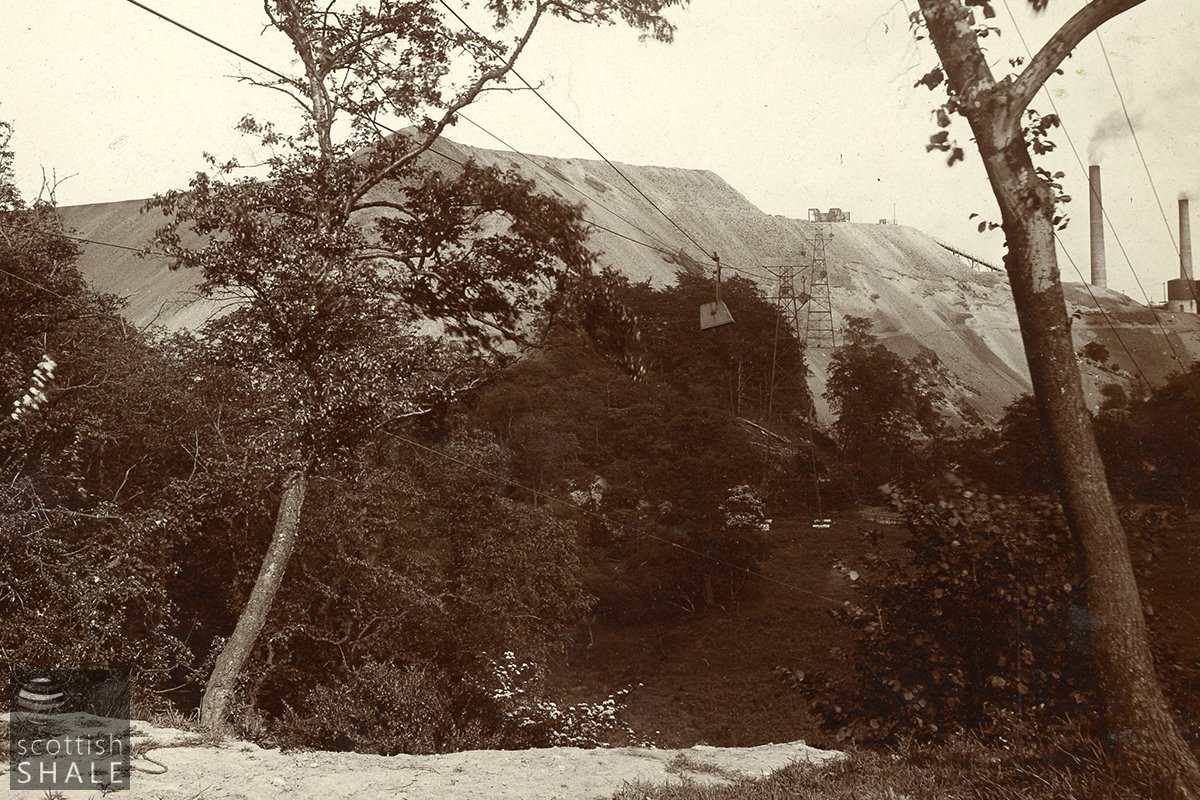 The edge of the escarpment, looking towards Oakbank oil works. 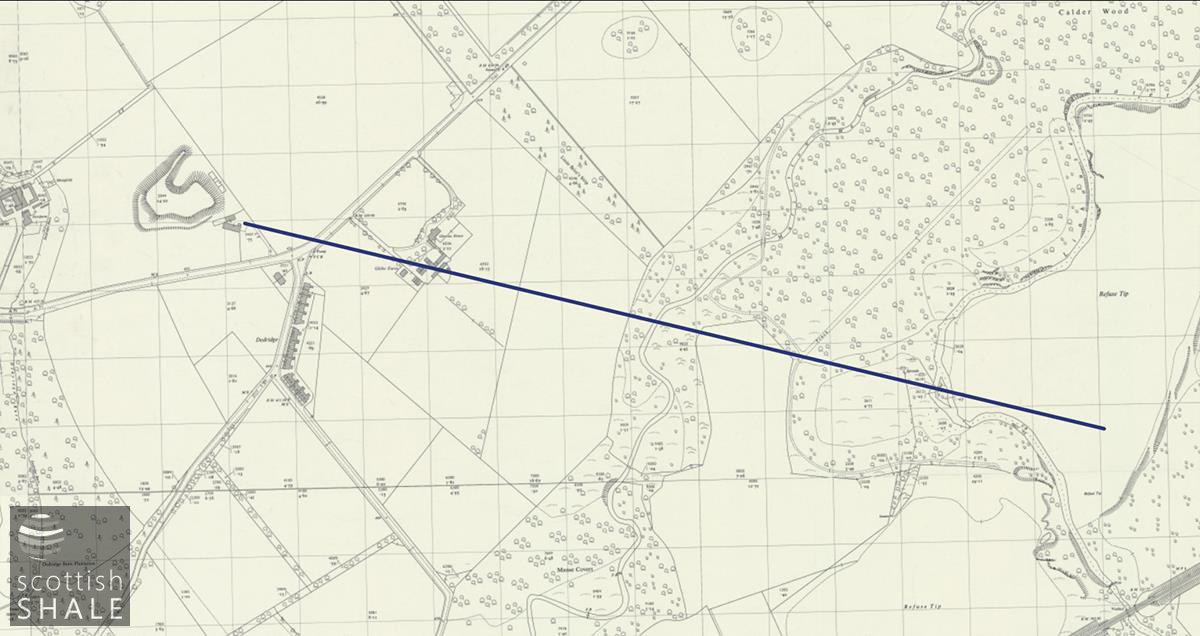 Presumed route of the ropeway, sketched onto a 1950's OS map. 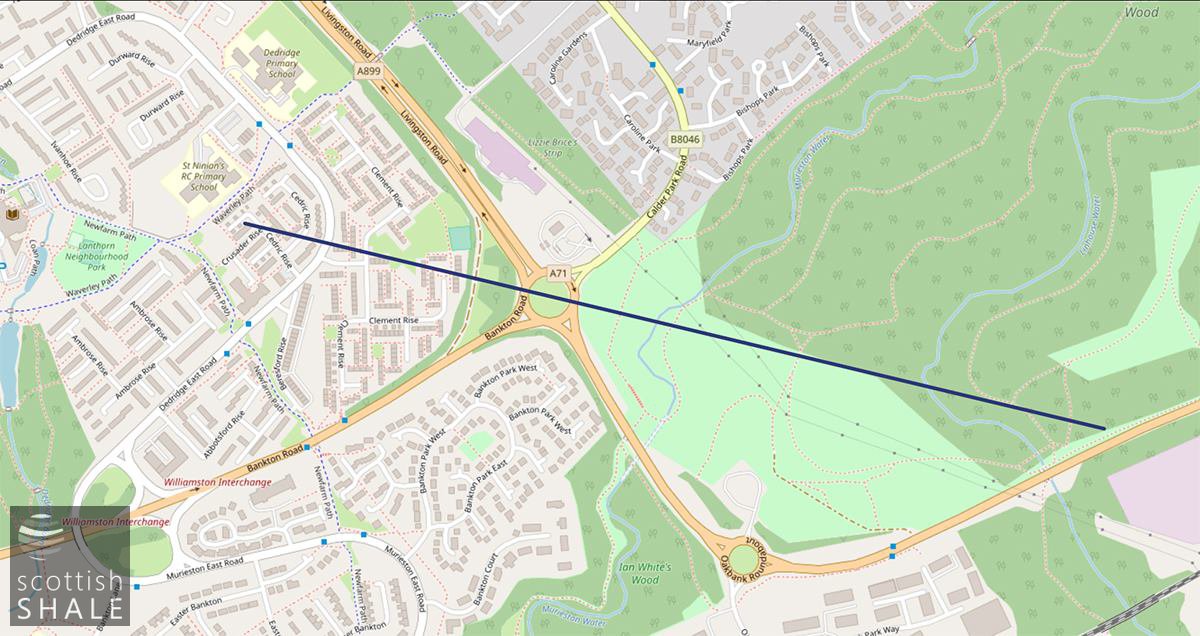 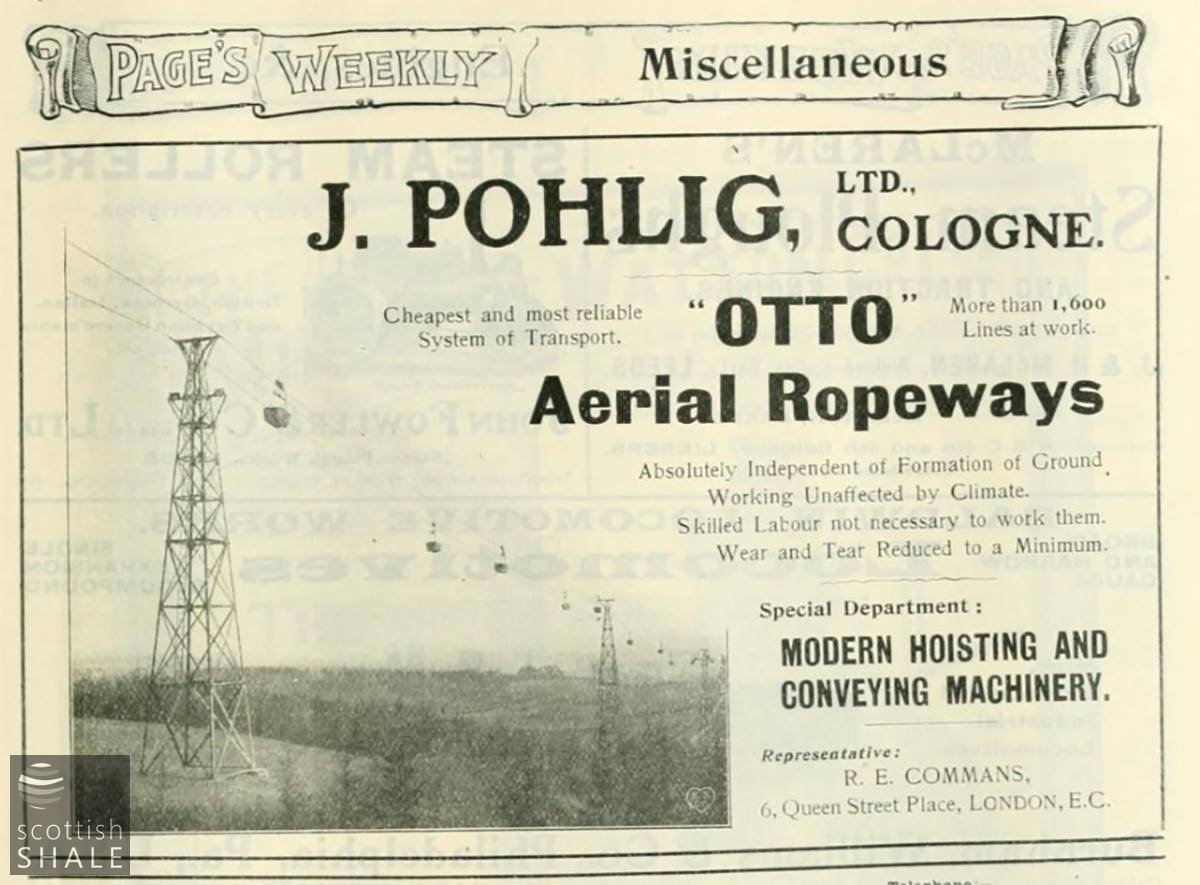 An advertisement from Pages Weekly, January 1906. 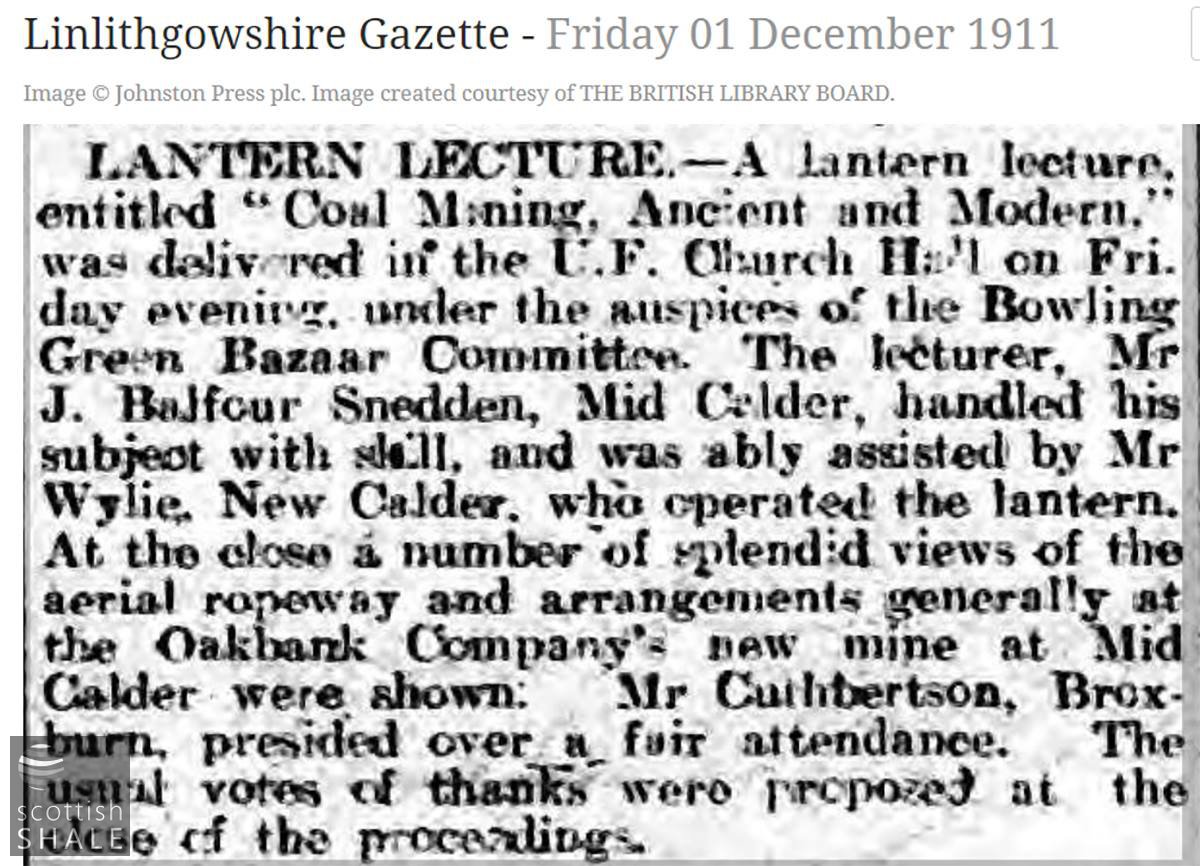 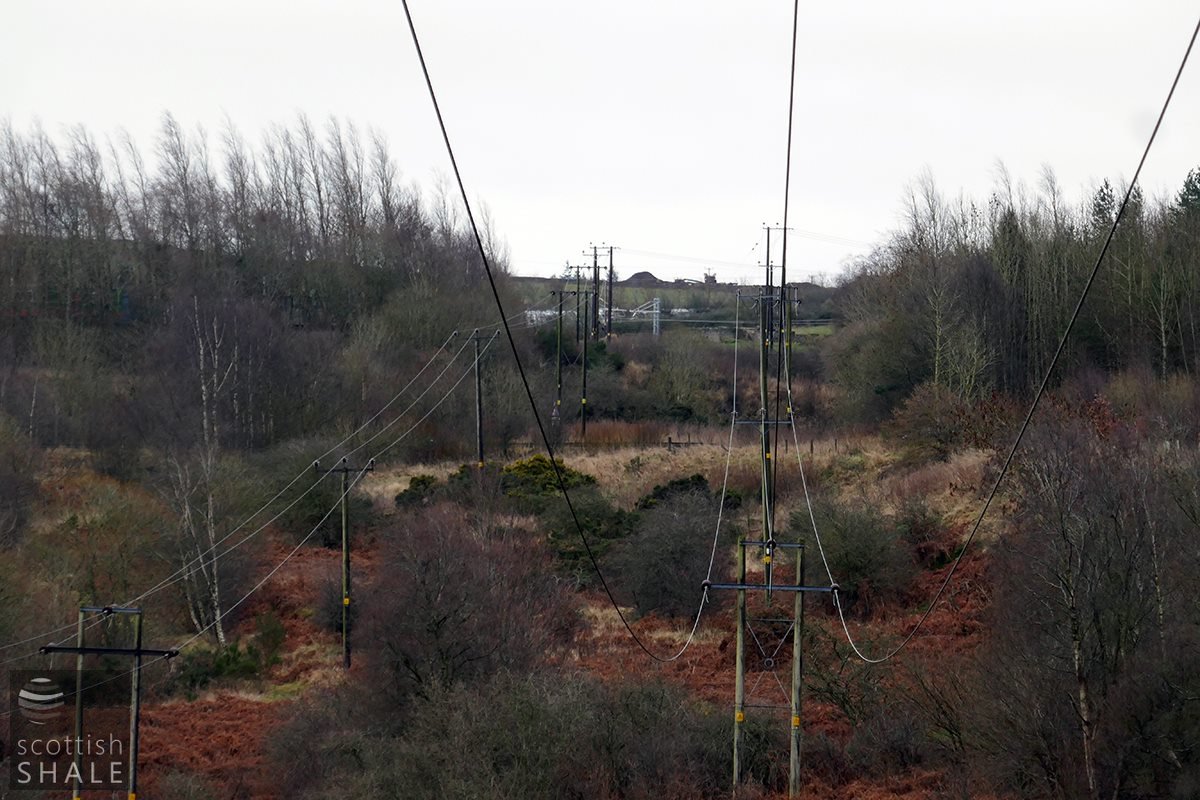 Electric cables now span the haugh west of Linhouse water, much in the way that the ropeway once did. 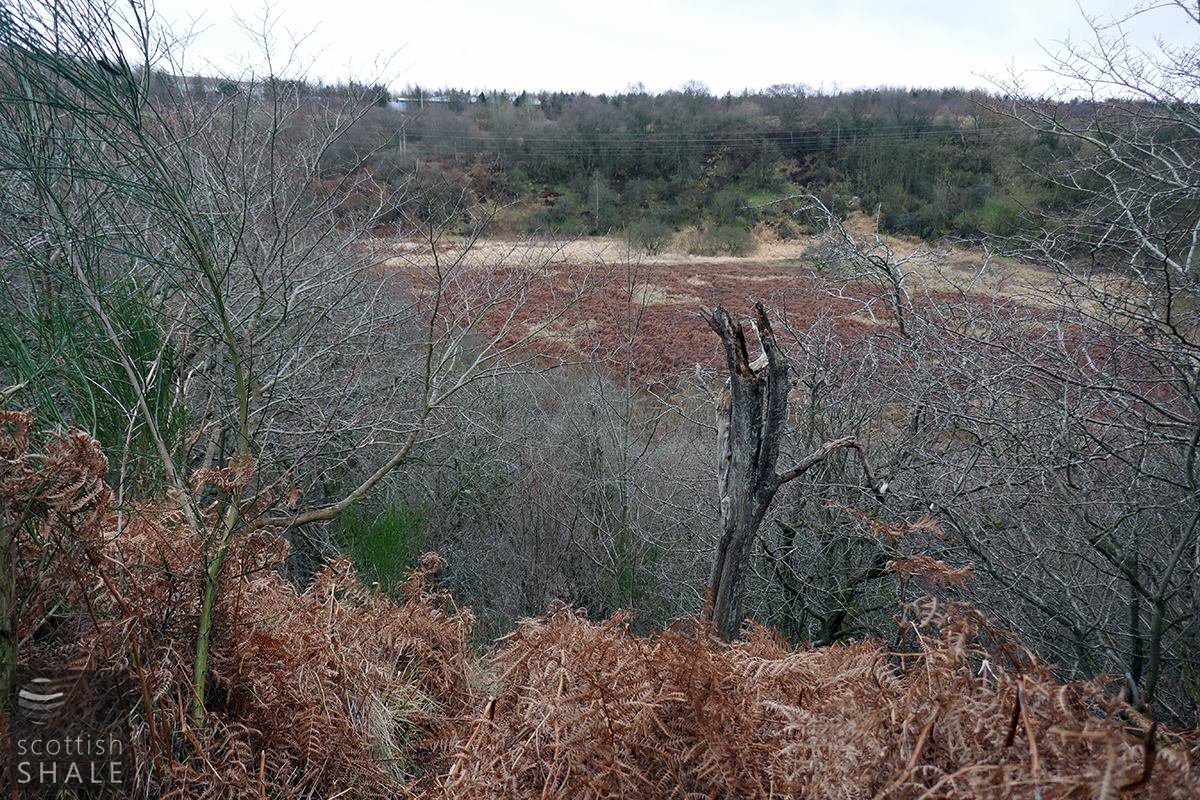 The edge of the escarpment, looking towards Oakbank. 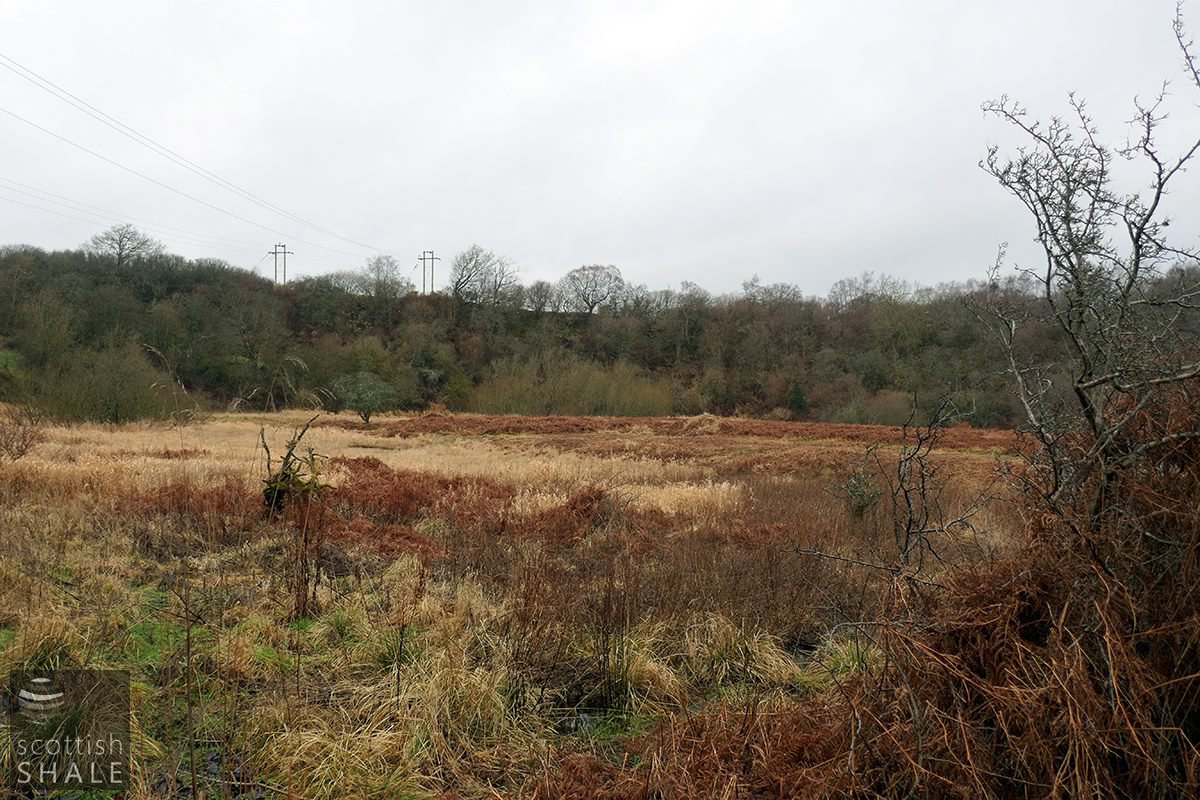 The haugh beside the Linhouse water, close to the site of a pylon tower - looking west towards the "escarpment". 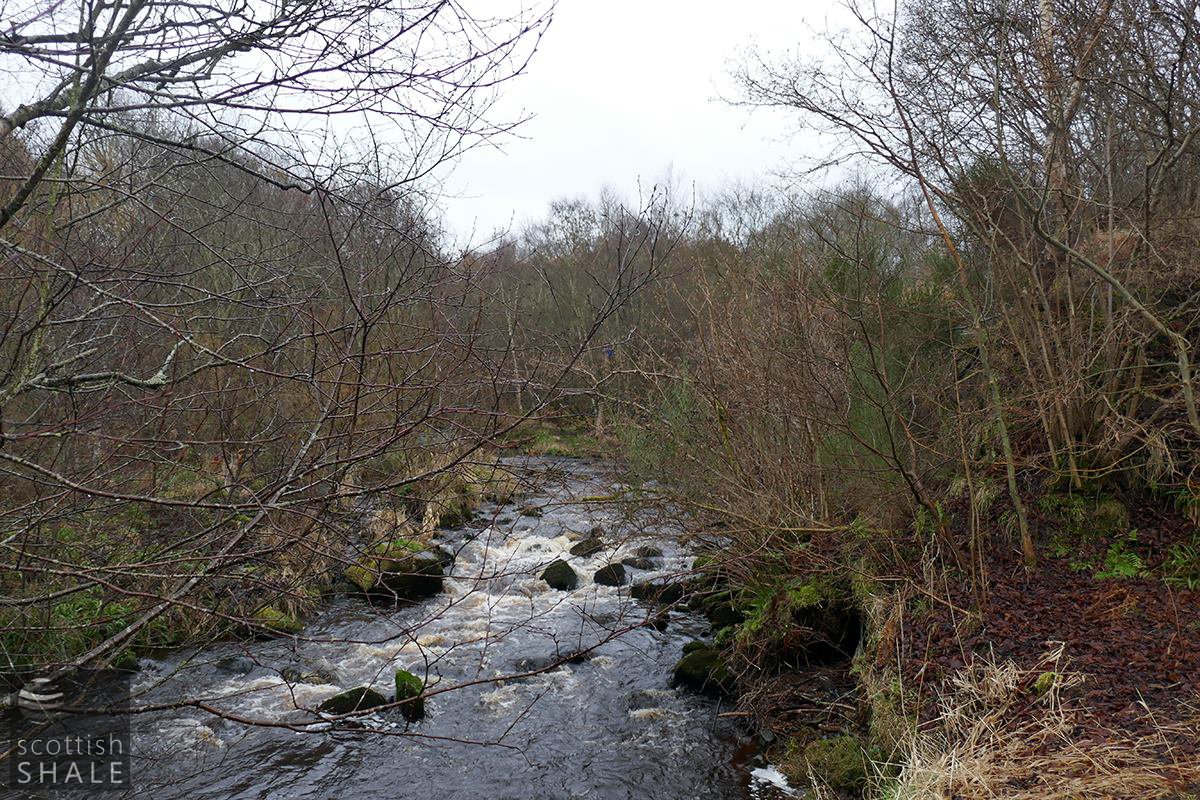 The lovely Linhouse water, close to where the ropeway will have crossed. 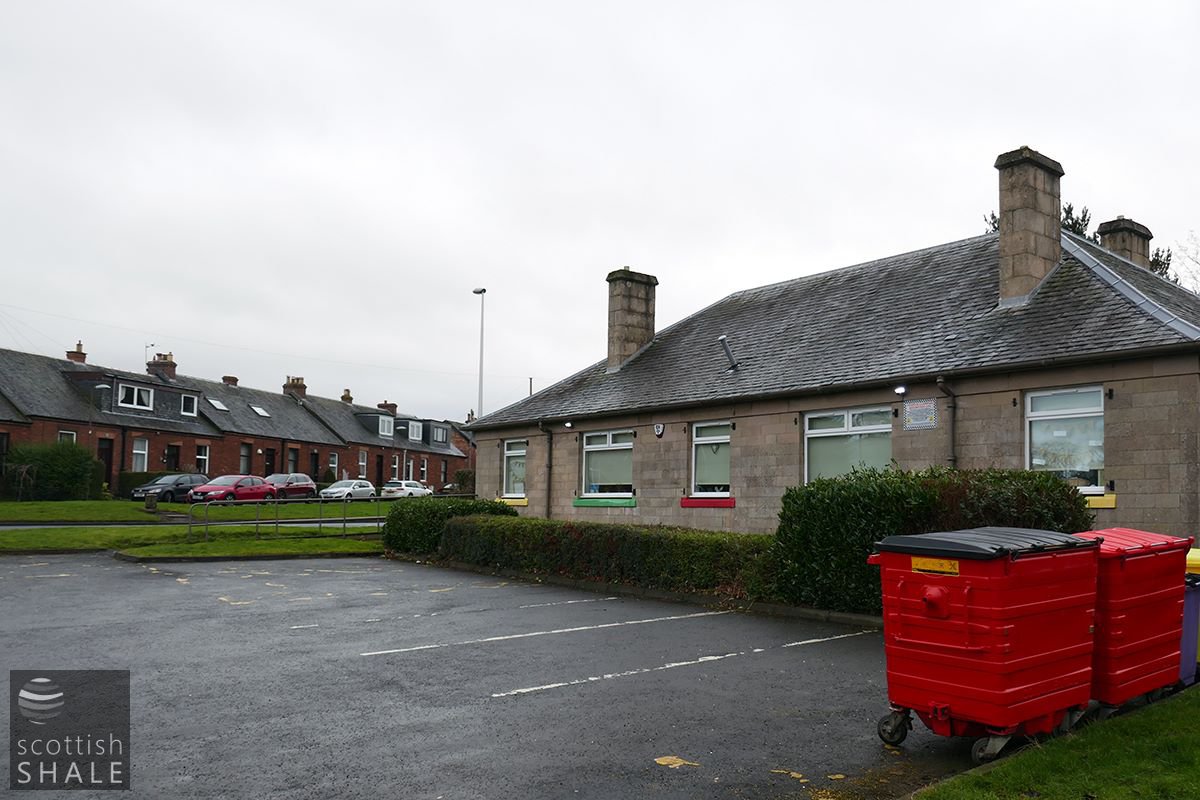 Dedridge rows, now Beresford Rise, with pre-new-town building. Was this built on the site of the County roadmans cottage shown in the first view?