Camilty Bridge and the Road to Nowhere

A Grand Plan for a Highway to England

An elegant arched bridge once spanned high across the Linhouse Water; part of a half-mile long highway in a quiet corner of West Lothian that seemed to serve no useful purpose. The course of this mysterious road can still be clearly traced. Heading south towards Camilty, in the parish of Mid Calder, the nature of the little country lane suddenly changes as it continues on a straight course between stone walls set wide enough apart to accommodate two generous carriageways. Before the old farmhouse at Camilty is reached, the wide roadway swings gently to the east, losing little height as it heads towards the Linhouse Water on a broad embankment that increasingly towers above the surround landscape. On either side of the river, the earthworks were retained by the massive retaining walls and abutments of a bridge with a high stone arch that carried a wide and level carriageway across the Linhouse Water and into Kirknewton parish. The roadway then turns and climbs up the side of the valley, on a straight course and steady grade, before curving onto the boggy moorland plateau, Here it abruptly stops and only winding sheep tracks continue across the moss. It's a road to nowhere. 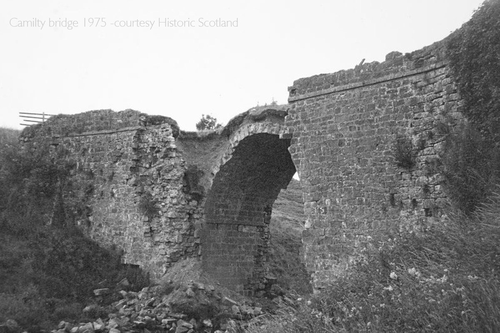 This substantial highway, according to a carved keystone that was once part of the bridge, was built in 1830 by J. Tay, engineer. It is a substantial and, no doubt, expensive piece of civil engineering built to the same standards as the finest turnpike roads of the day. The gentle curves and even grades seem designed for the type of horse-drawn stagecoaches that linked Scotland's cities at that time, yet it appears that no traffic ever passed along the road, other than the occasional horse or farm cart.

A search of newspapers and archives of the time reveal very little record of this ambitious enterprise, other than an account from 1838 by John Sommers, the minister at Midcalder

“The bridge at Camilty was lately built over the Linhouse Water, chiefly through the influence of Mr Young of Harburn, to whom with the late Lord Hermand, this district is much indebted for many valuable improvements on the public roads. This bridge has been erected at a very considerable expense, and when the road in this direction is completed to the Cauldstane Slap, at the southern boundary of the parish, it will greatly facilitate the intercourse with our southern neighbours, and especially that of the English cattle-dealers with the northern markets, as it runs in the most direct line between Falkirk and the English Borders. As few individuals are particularly interested in this line of road, and as four or five miles of it are still in an unfinished and unformed state. it is much to be feared that there is little hope of this important improvement being soon completed.”

The Minister's account suggests that the bridge at Camilty was part of a grand scheme for a major road linking central Scotland with the English border, crossing the Pentland hills at the Cauldstane Slap. It would have been a motorway of its day.

Over the years there were many proposals to upgrade the rough drover's track across the Pentlands along which tens of thousands of highland cattle were herded each year on their journey to the markets of the south. By 1832, parts of the the drove road on the southern side of the Pentlands had been upgraded to a proper road, and there were calls that this to be extended to form a through route across the hills. It was claimed that “if the road were completed, ladies could visit in a coach, and pass comfortably through the wildest and most secluded district in the whole range the Pentlands.”

Rather surprising, a through route was never constructed across the Pentlands, and to this day the hills offer a barrier to the natural flow of traffic . Perhaps as the high moors along the northern margins of the Pentlands were prized for their game, the great local landowners resisted the road builders as they feared it would damage their sport. Preservation of game may also have been a factor in why the mystery road was never extended south from Camilty bridge to link up with the Edinburgh to Lanark turnpike road (the Lang Whang), about two miles to the south. This would have crossed grouse moor forming part of Lord Morton's Dalmahoy estate. His lordship must have initially supported the Camilty bridge and approach road, as it lay partly on his land, however later accounts assert that it was Lordship's objections that thwarted further extension of the route. 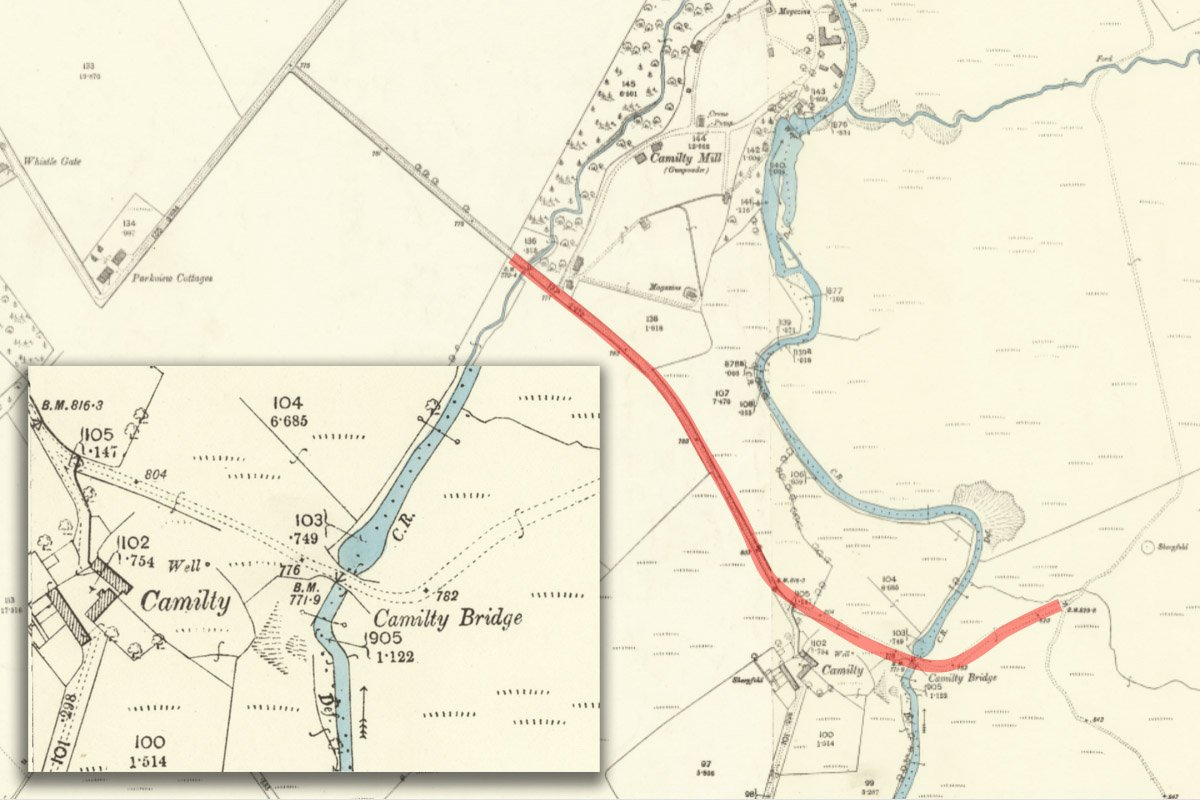 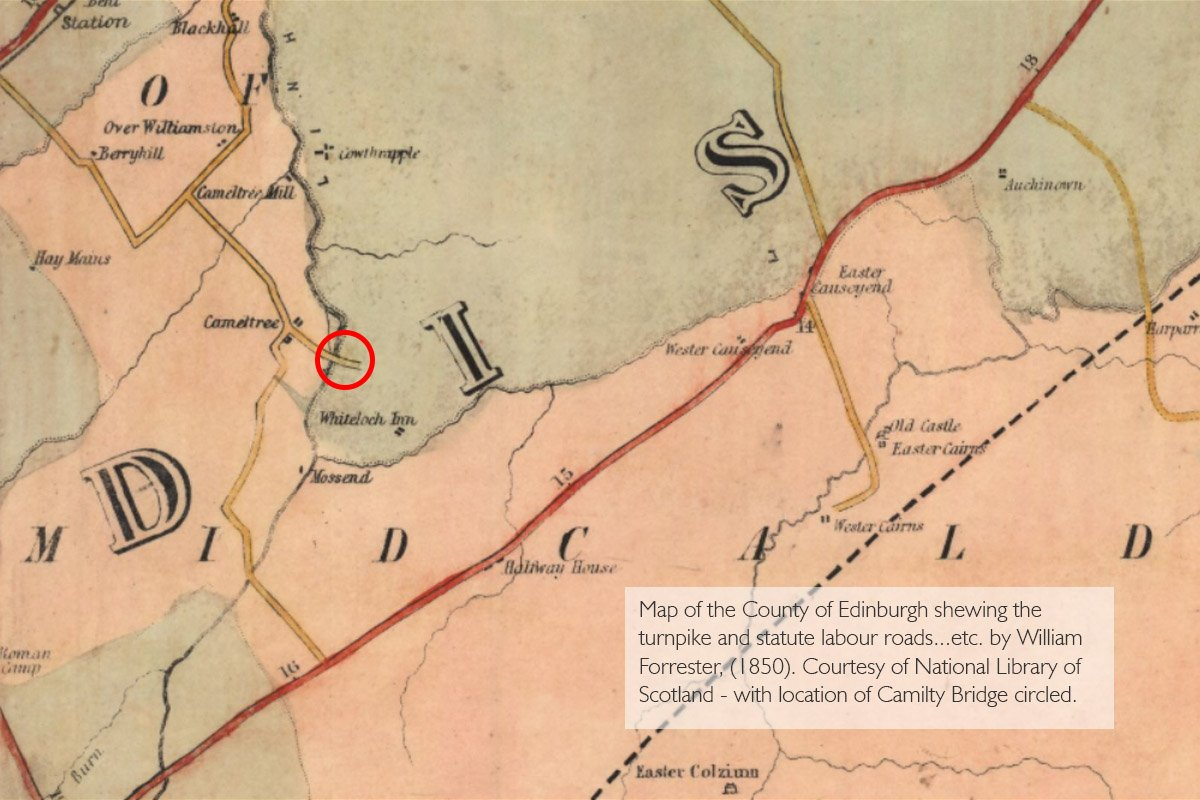 Mr. Young of Harburn was said to have been a leading influence behind construction of the Camilty bridge. Alexander Young WS was a prominent Edinburgh lawyer who in later life spend much of his energies in construction of Harburn House (completed in 1804) and its landscaped policies; “creating an oasis out of a wilderness”. Like his neighbour and fellow lawyer at Hermand House, Young made huge improvements to the agriculture of his estate, enclosing fields, attending to soil drainage and fertility, planting shelter belts, and setting out new roads. He also establish a mill within his lands at Camilty and was regarded by his tenants as “an honourable gentleman, and … a worthy and humane landlord”. In addition to his local interests, Young was an active member of the Highland Society of Scotland, and it perhaps that while exchanging ideas about agricultural and trade improvements he encountered ideas for the great new road across the Pentlands?

Young died in 1842, by which time it would have been clear that Camilty bridge was a giant and expensive white elephant. There is no evidence that the new route was extensively used by cattle drovers. The droving trade declined with the coming of the railways, and canny drovers often preferred to ford rivers rather than pay tolls to use a bridge.

By the 20th century the bridge was a largely forgotten oddity, used only be the occasional farmer or rambler. An account of a country ramble from West Calder to the Cauldstane Slap, first published in 1909, describes that “on crossing the "jackdaw bridge " over the Linhouse Burn, we discover after, (it may be said), a little casting about, a fairly well-defined pathway is found across the couple of miles that divide us from the "Lang Whang." Now we are now surrounded by all the sights and sounds of the moorland.”

When visited by inspectors of the Scottish Development Department in 1962, the “jackdaw bridge” (or “daw brig”) remained intact and was recorded as “High segmented arch, rounded coping on parapet walls; keystone inscribed “Built by J. Tay 1830”. By 1975, when a survey of listed buildings was carried out, a good part of the arch had collapsed, and the remaining parts finally fell into the Linhouse water in about 2011. The scars of freshly exposed sandstone show that the old structure continues to decay through the action of the river and the passage of time.

Camilty today is a quiet and peaceful place, especially in beauty of the first spring greenery with the air filled with birdsong. Had the bridge been successful and a major road established across the Pentlands, might this have fundamentally changed the development of Scotland's road network? Might this now be the route of a motorway carrying much of the cross-border traffic?

The empty green course of the road is also echoed in the still-to-be-used approaches to the Avon Gorge and other features of the A801 that are relics of the 1970's vision to link Grangemouth with the M74 by way of Whitburn. Another great motorway that never was. 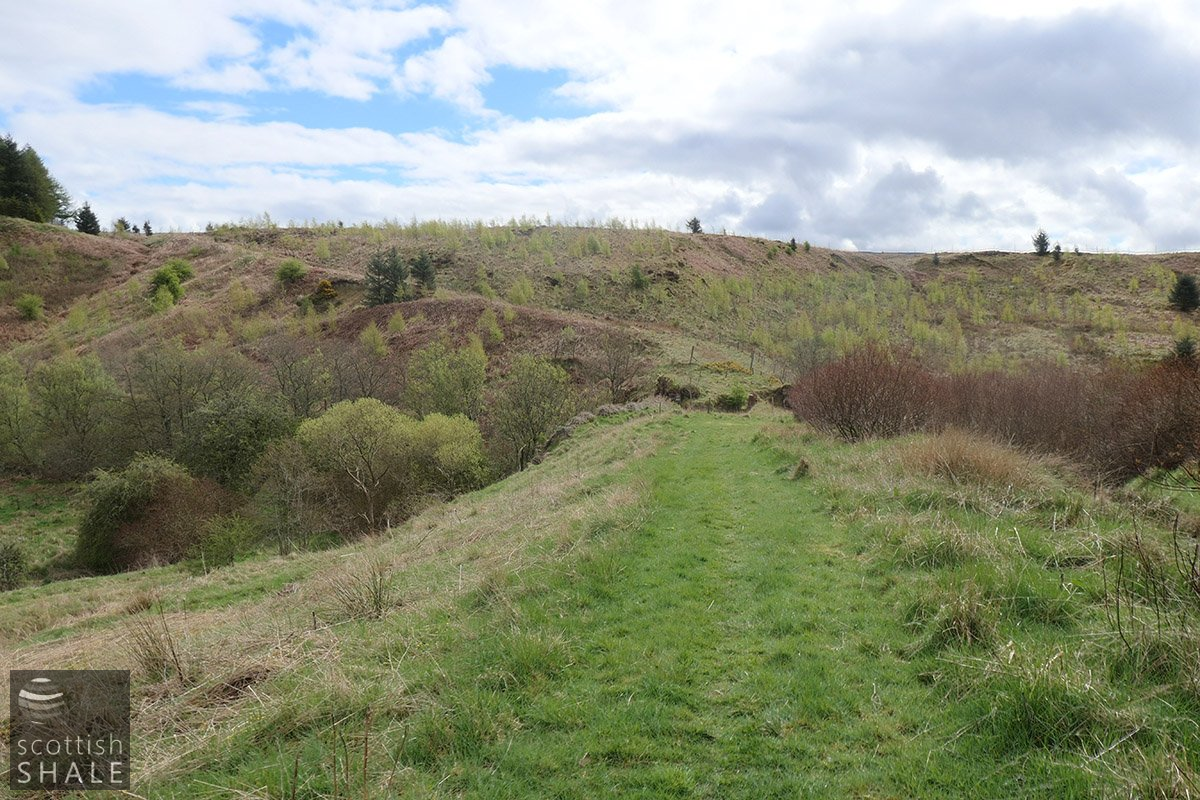 The impressive earthworks, and missing bridge 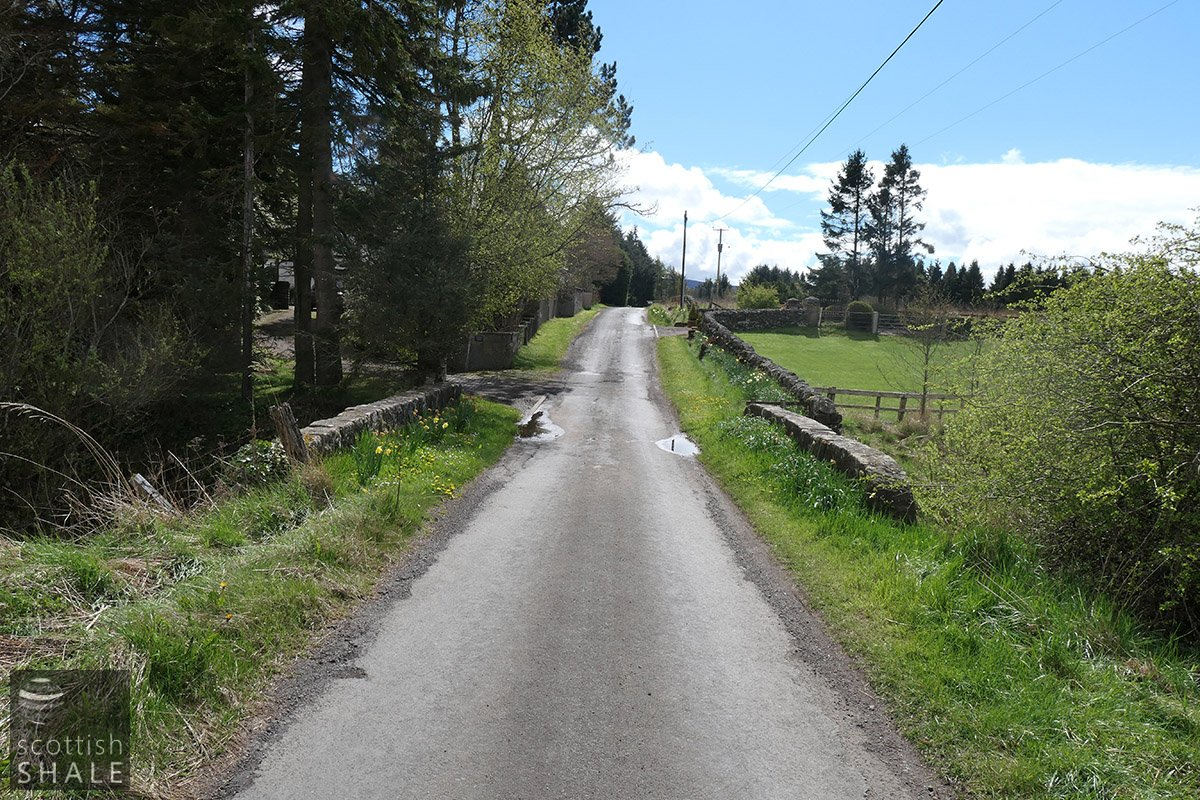 The start of the road, looking south at the Black Burn bridge 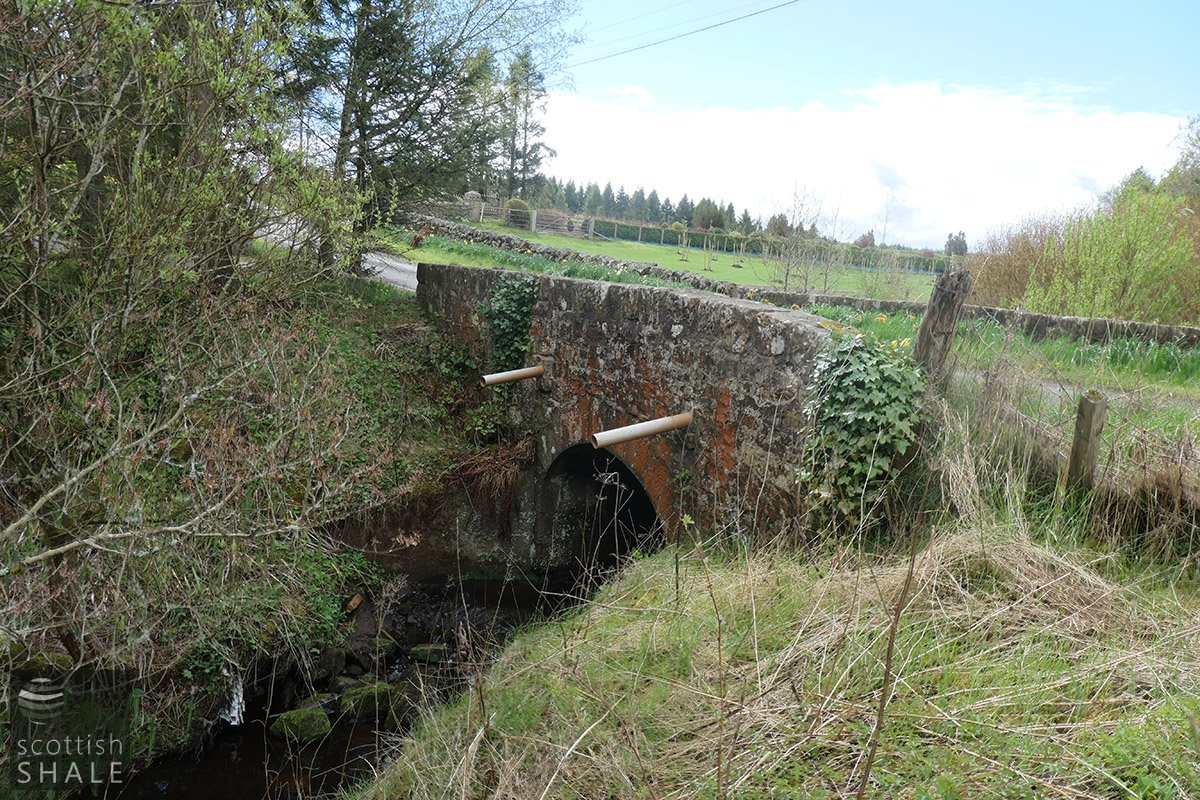 The Black Burn bridge, probably contemporary with the Camilty bridge 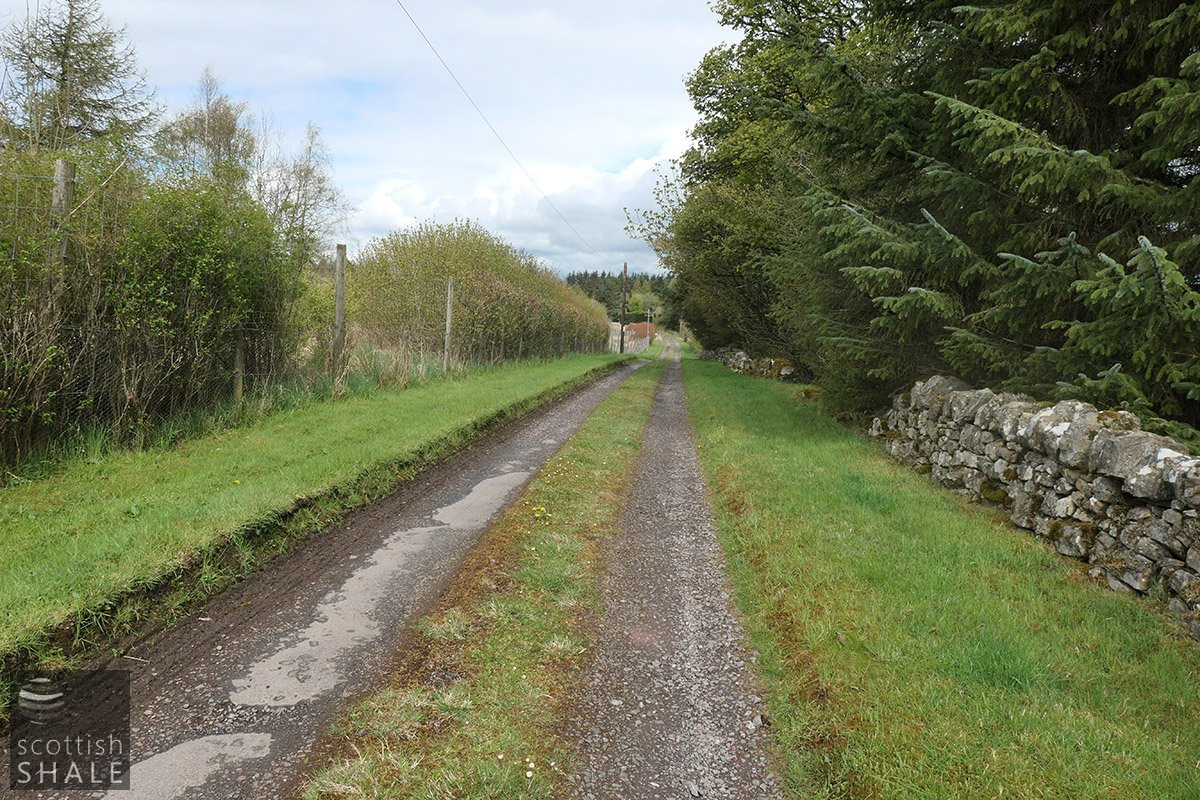 The impressive approach road to Camilty 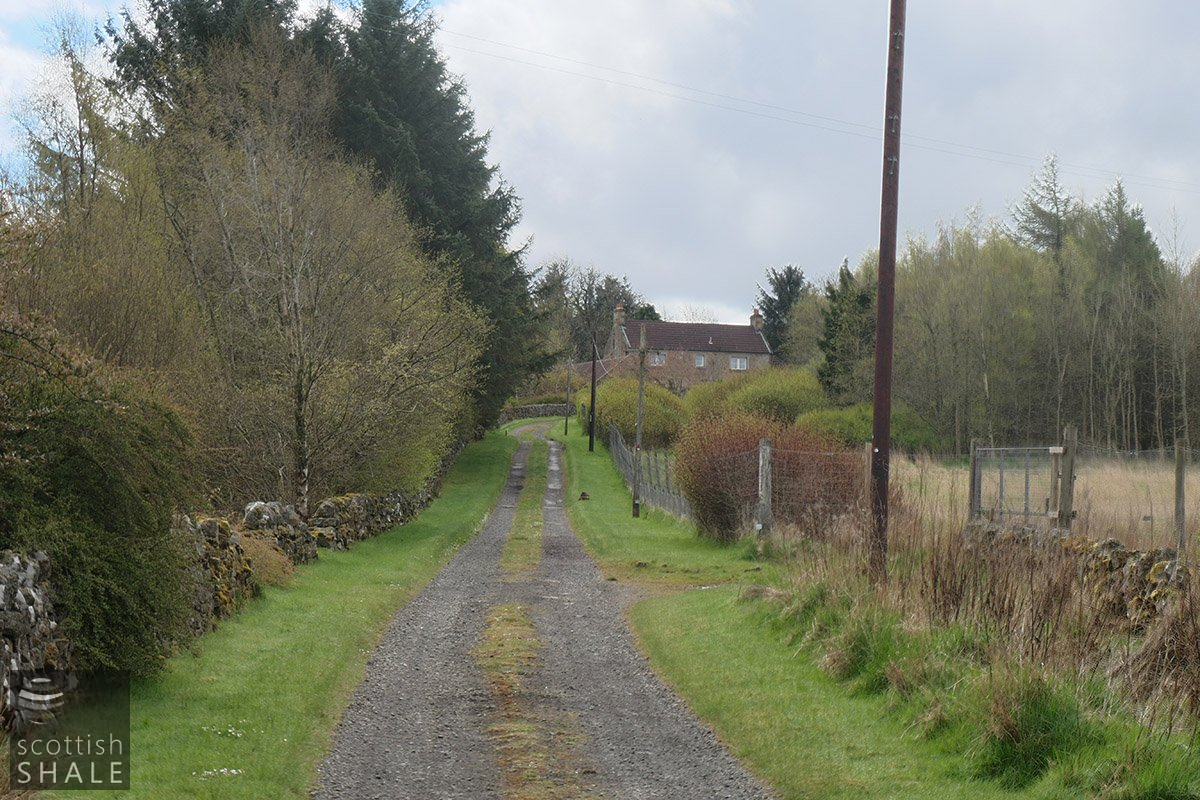 View towards Camilty farmhouse, the main road veered off to the left 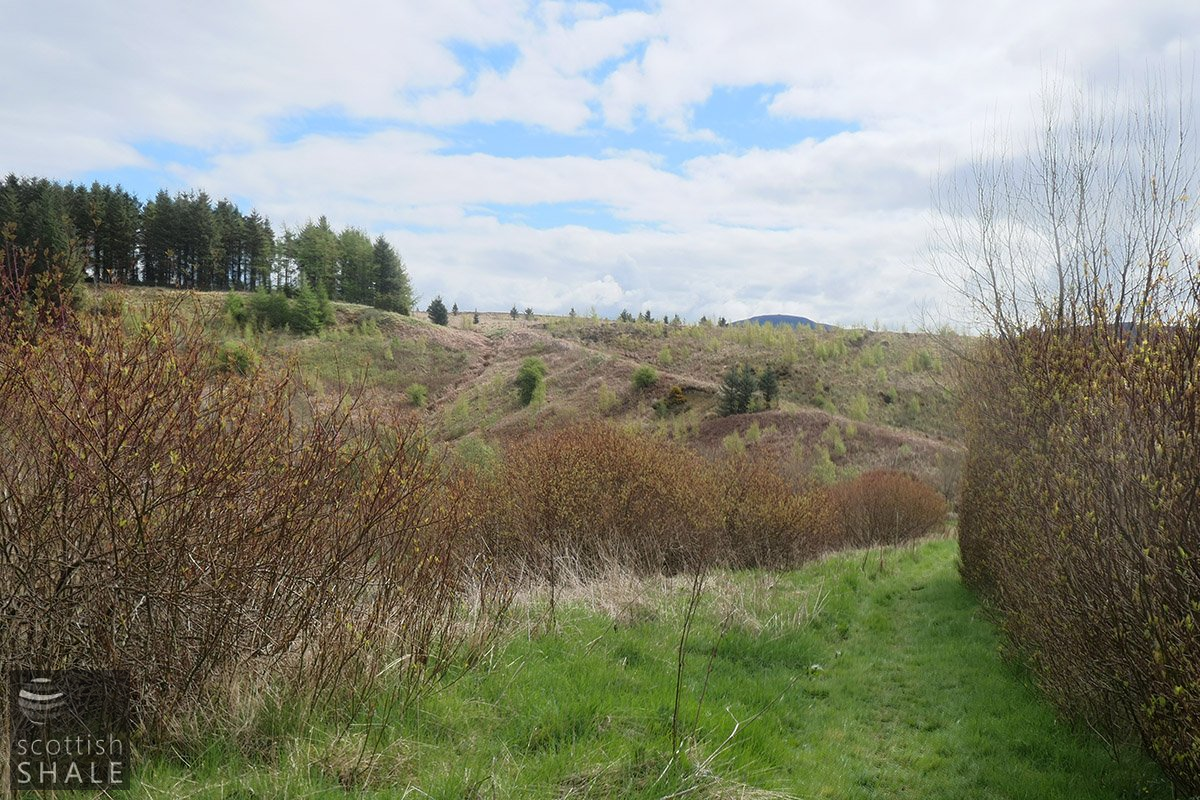 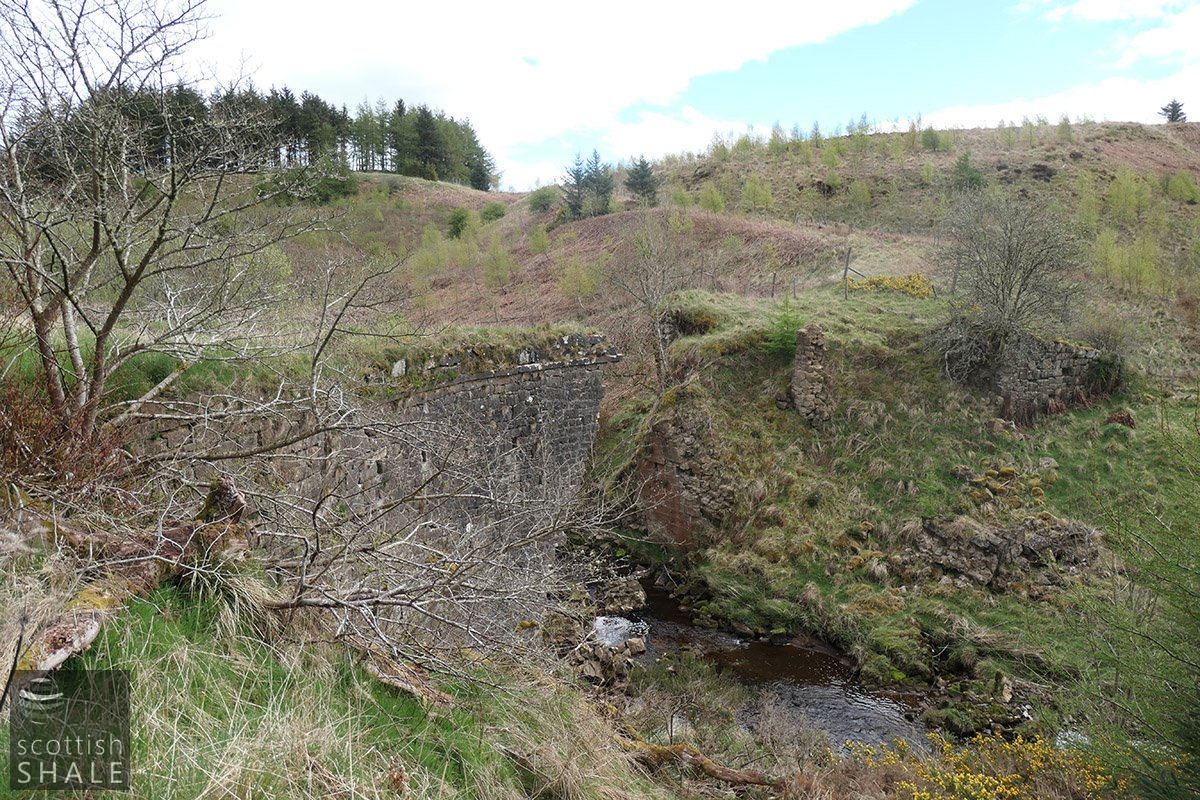 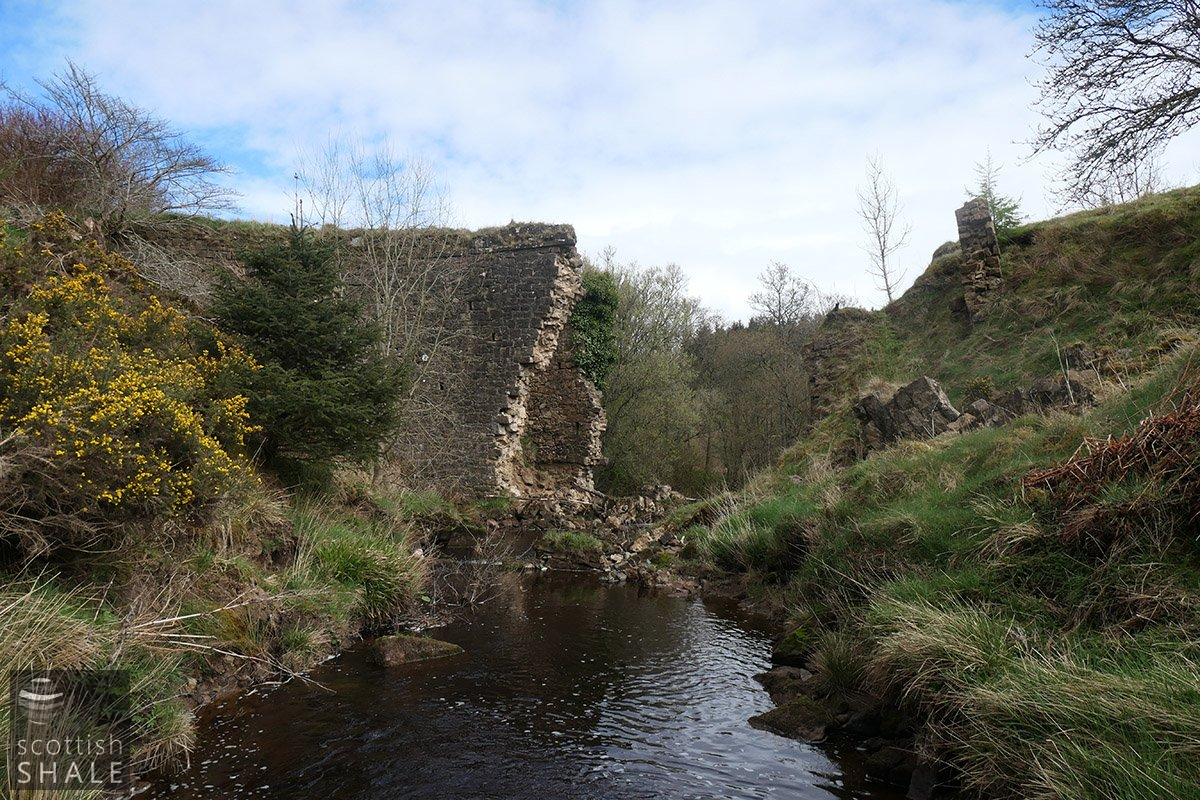