The Clattering Mill at Blackridge 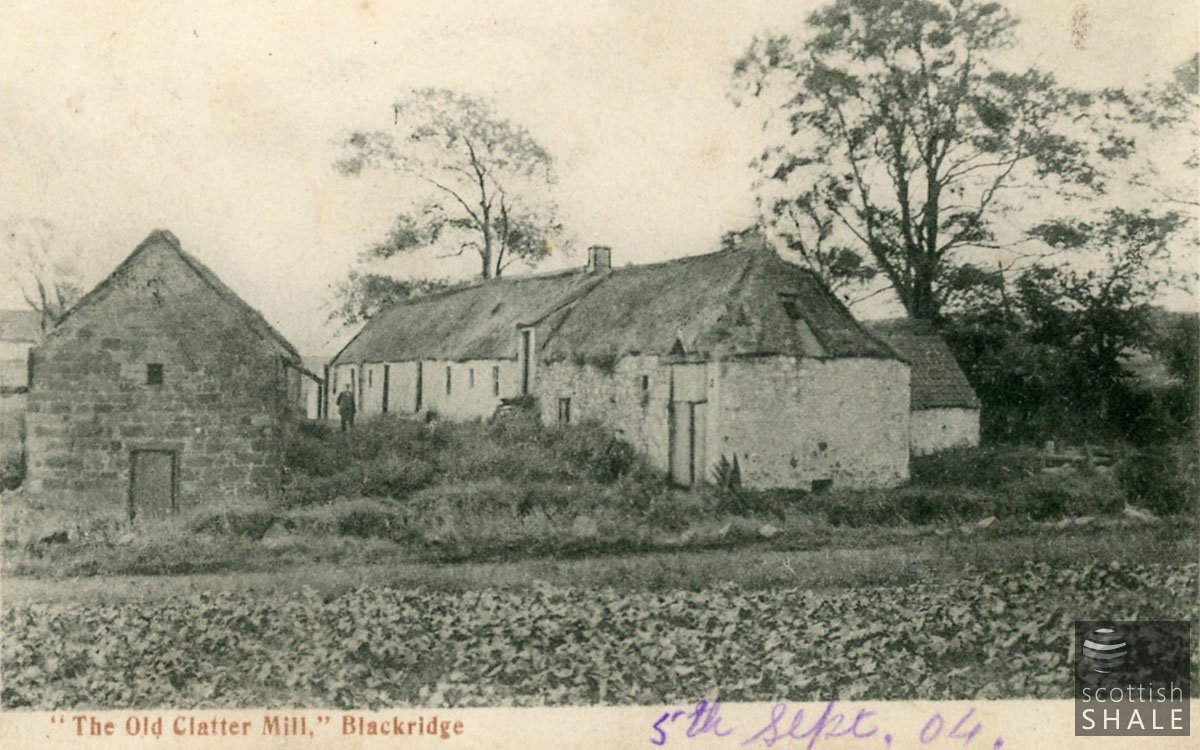 A view of the mill, taken some time prior to 1904, but with a good crop of weeds growing in the mill yard and the old mill building contain the waterwheell (presumably the thatched structure in the centre of the image) already looking rather delapidated. 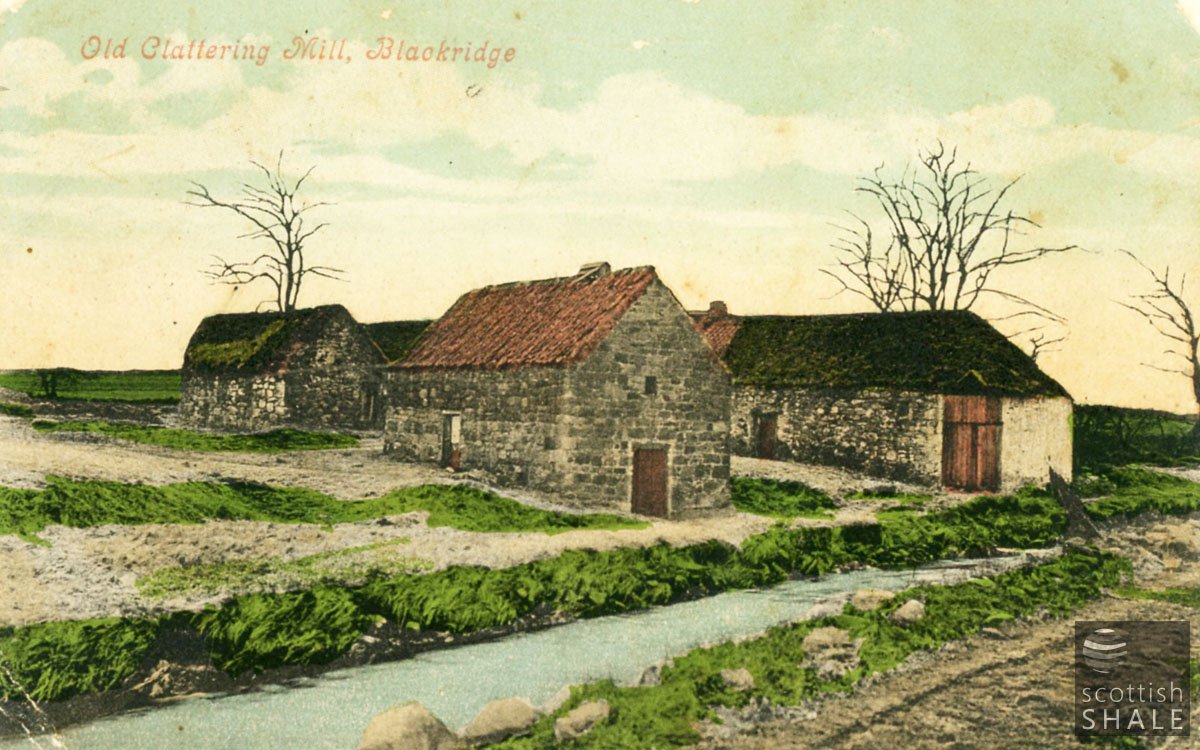 A hand-coloured view of the mill with the Barbauchlaw burn flowing in the foreground. The colouring neatly distinguises the pantiled roof of the kiln building from the turf thatch of the older mill and farm buildings.

It’s said that it was the Norsemen who first brought watermills to the northern parts of Britain. These “norse mills” relied on the force of flowing water to turn a small horizontal water wheel coupled directly to a pair of mill stones. These simple machines produced little power, but were relatively easy to construct. There was little need for weirs, lengthy lades, storage ponds and other hydraulic engineering required to provide the head of water necessary to power more advanced designs of mill. 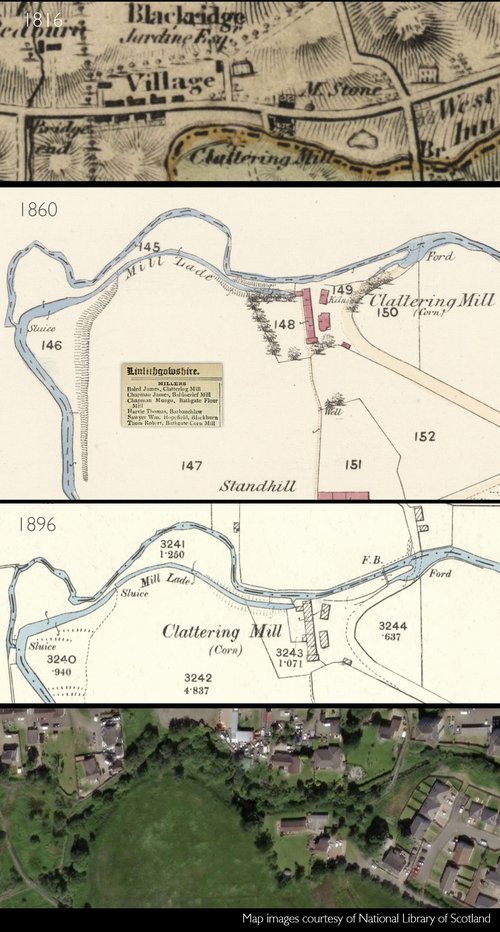 In a norse mill, the hopper feeding grain into the centre of the grindstones was nudged by a peg every time that the millstone revolved, helping the flow of grain, and making a repetitive clicking sound. Because of this, they were often known as “click mills”, “clack mills” or the suchlike. Early in the industrial revolution, this old type of mill was superseded by more efficient modern designs in all but the remotest parts of the Scottish highlands and islands. A couple of examples still survive in Orkney and Lewis

It's strange therefore that Blackridge's old-style Clattering Mill continued to operate well into the 1880's, despite it’s position in the heart of industrial Scotland, in plain sight of one the main Edinburgh to Glasgow highways. Maps suggest that a sluice gate diverted most of the flow of the Barbauchlaw burn along a short lade and through a culvert flowing beneath the mill yard. The horizontal waterwheel was presumably fitted in a pit below the most venerable of the complex of mill buildings, shown in photographs as having rough random rubble walls and a thatch of turf.

It seems to have been a place steeped in tradition, and held in affection by many. For much of its working life, the mill was said to be occupied by the Baird family. James Baird, “miller and farmer of 60 acres”, and his family, were recorded as living there in every census between 1841 to 1881. It was family tradition that “there had been Bairds at Clattering Mill since the 12th century”. Although milling probably ceased in the 1880's, the farm and farmhouse continued to be occupied under control of the Cruikshanks from the neighbouring Standhill farm. It was Cruikshank family tradition that the mill was a noted place of meeting for the Covenanters, and that a Cruikshank had been tenant of the Clattering Mill at the time. It was at a clandestine meeting held at the mill that a Cruikshank was said to have been selected by ballot to ride to Swineabbey one dark night and shoot a lieutenant of Dragoons “who with a party of soldiers had inflicted terrible cruelties on the defenceless country folk”.

The photographs used in the postcards were probably taken soon after 1900, by which time the Clattering Mill appears abandoned and overgrown. This romantic ruin seems to have moved some to poetry. In 1910, an ode by a J.M. Edwards was published in a local newspaper:

Oh the Clatter Mill, I see it still
Wherever my feet may roam
It stood beside the shady rill
This old remembered home.

James Baird, the last of the Clattering Mill Bairds, died in 1927 aged 83. He was a well known local character and a great Burns enthusiast. His obituary stated that at that time only the ruined walls and foundations of the mill still survived
To quote further the immortal words of J. M. Edwards........

Thy walls and thy roof are pulled down.
The wood the strangers steal
Until only in skeleton form you’re left
For thee no respect they feel 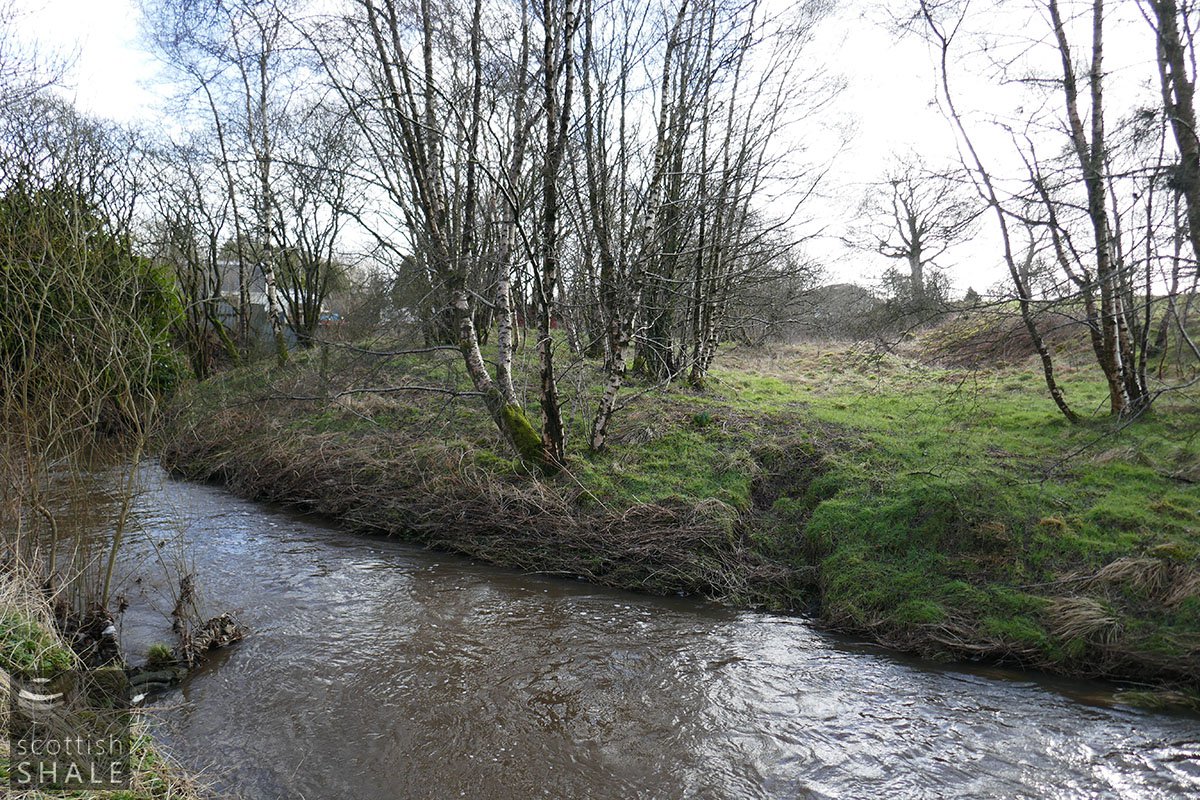 The Barbauchlaw burn follows a rather different course than in the days of the mill. The flat grassed area on the south side of the burn marks the route of the mill lade. 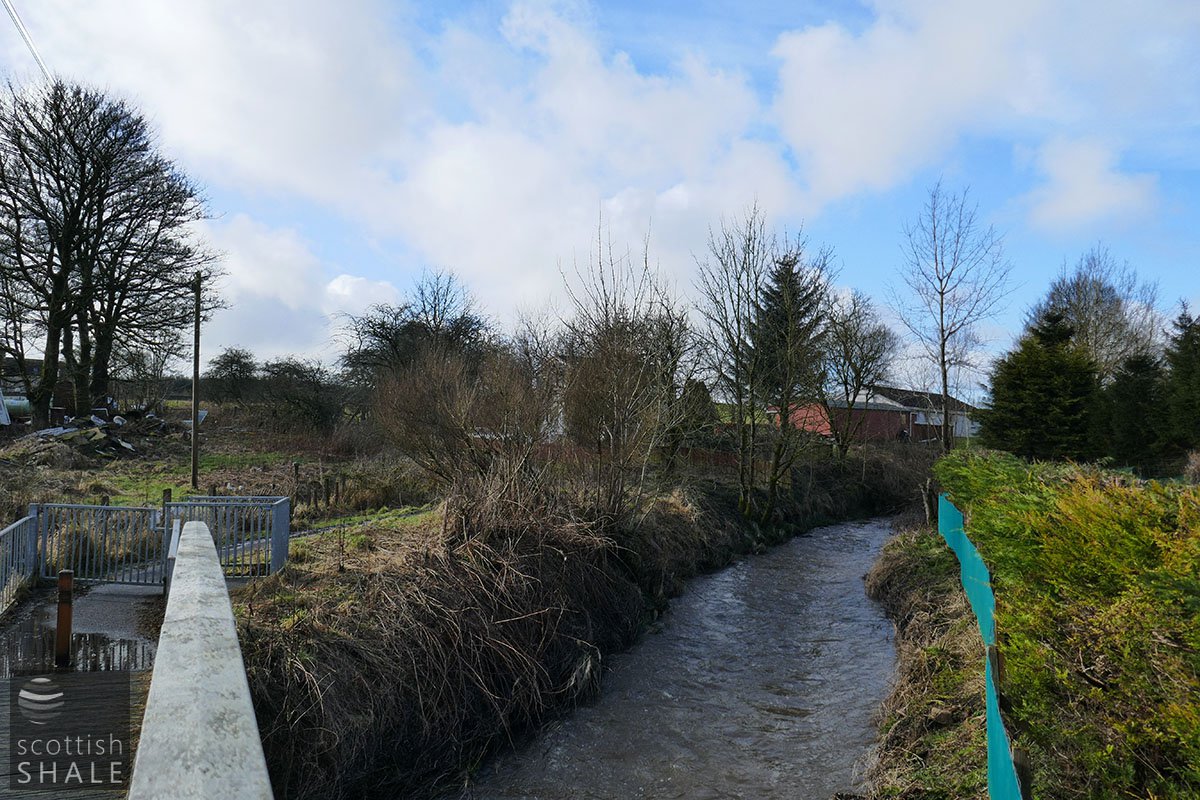 The view from Clattering Mill bridge, looking upstream from close to the point where the mill lade once re-joined the Barbauchlaw burn. New houses now occupy the site of the Clattering Mill.