Early mines beneath the Muldron Moors

The Gladsmuir Hills form an unremarkable area of upland, from where the moors of Muldron slope gently down towards the north and provide views towards Fauldhouse. The high moors seem never to have been improved and grazed, but were managed for many years as a sporting estate. During the season, shooting parties took to the heather to bag a proliferation of grouse, snipe and hares. 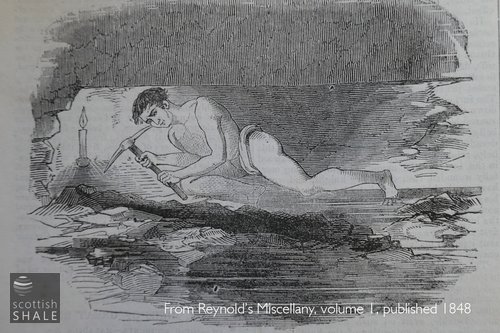 Conifers were planted across the moors during the 1970's, which very quickly obscured the landscape. Much of the 1000 hectares of commercial forest reached maturity over the last decade and has been harvested, making way for a new crop of wind turbines; part of the Blacklaws 2 windfarm. The removal of the forest has again revealed the waste bings from 19th century ironstone workings that rise like little islands from the moorland. A new forest, of sorts, is now beginning to submerge the landscape once more, as tightly-spaced self-seeded conifers, currently the size of Christmas trees, grow into a spiky impenetrable mass

Evidence of the earliest ironstone workings in the Gladsmuir hills can be glimpsed from the Headlesscross to Climpy road, near the point where West Lothian passes into South Lanarkshire. A succession of little green mounds on the distant skyline form part of a cluster of small-scale ironstone pits that were active sometime during the first half of the 19th century. You can reach these if you park at the entrance of windfarm, walk the solid roads that link the turbines, then follow a rough trail along the little valley of the Muldron burn. Once you are among the ironstone pits it's difficult to distinguish the mounds of waste from the natural contours of the ground, as most are now masked in moss and heather and increasingly submerged in a sea of small trees. However when viewed from above using LIDAR radar technology, the solid surfaces of the bings are revealed in crisp and clean detail.

The earliest Ordnance Survey maps covering the Gladsmuir Hills date from 1855, and show a closely-packed scatter of about thirty small waste heaps, many of which are associated with a shaft. Most or all of these seem to have been worked-out and abandoned by the time of the survey. Each little pit is served by a footpath, which link to a network of footpaths crossing the moors in various directions. The main path follows the Muldron burn heading north west in the direction of the Shotts. 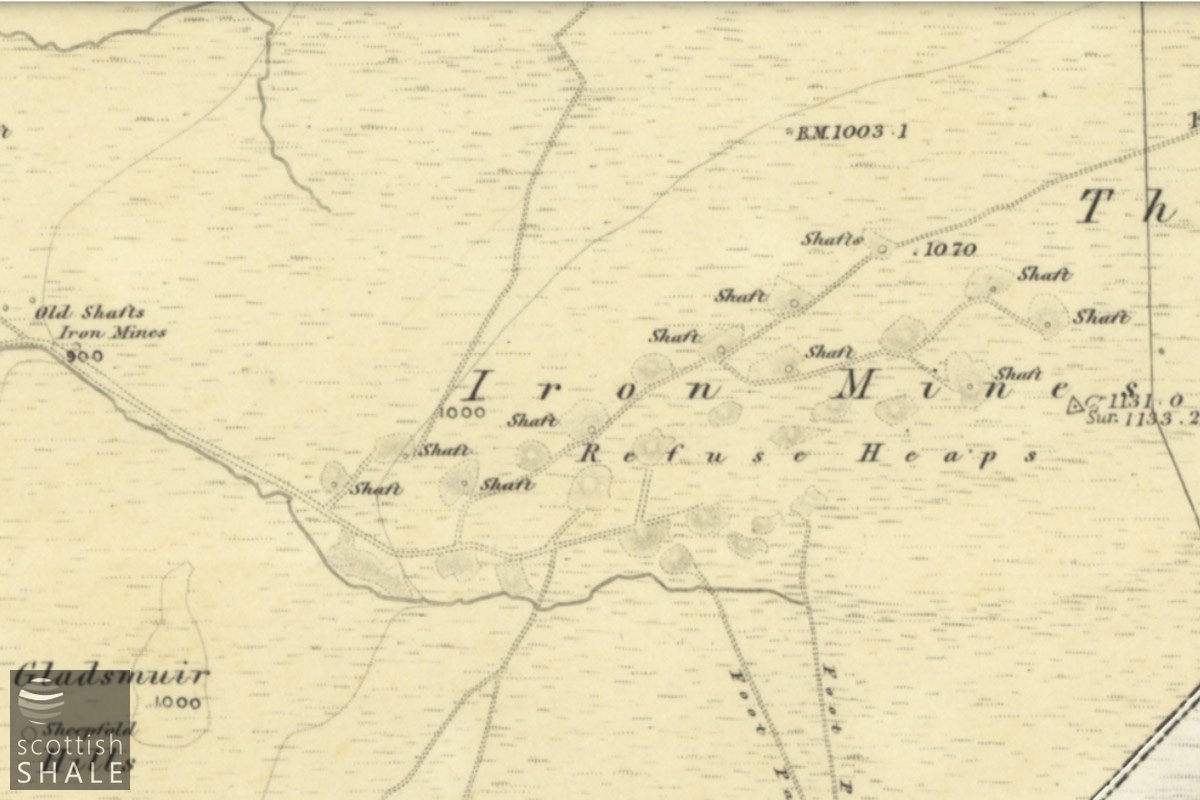 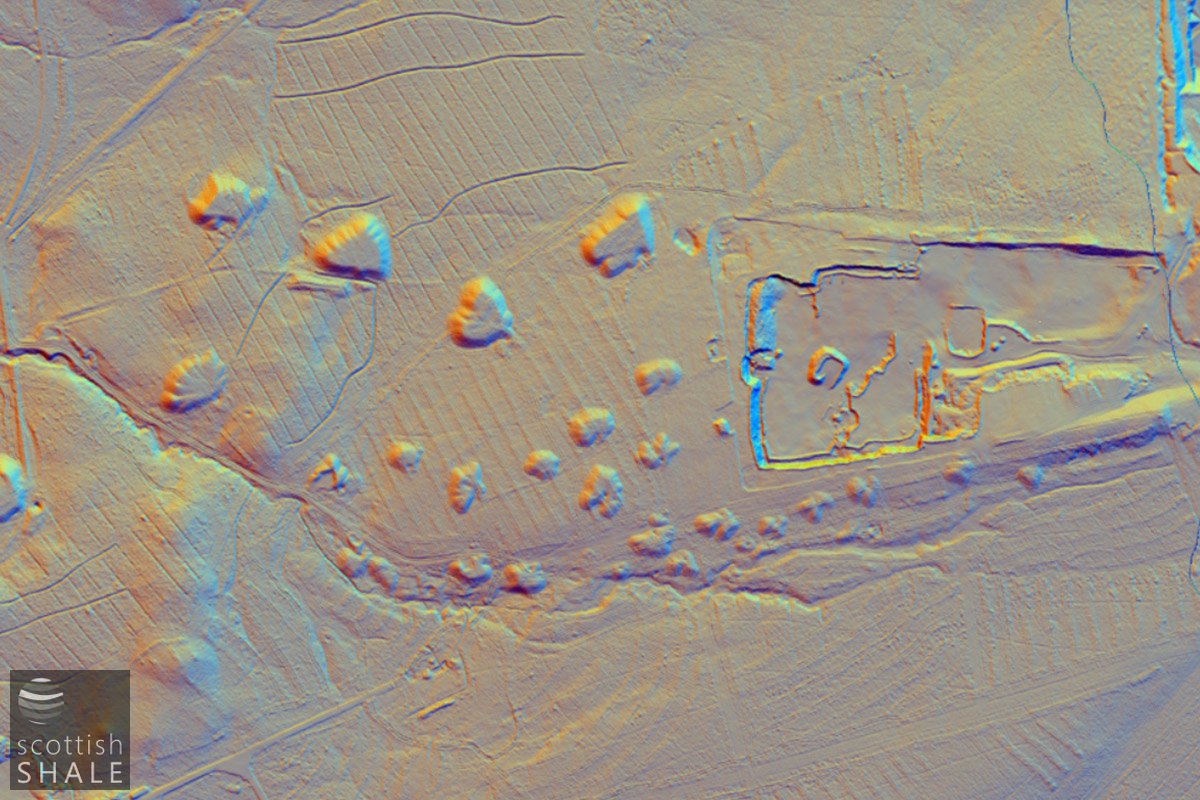 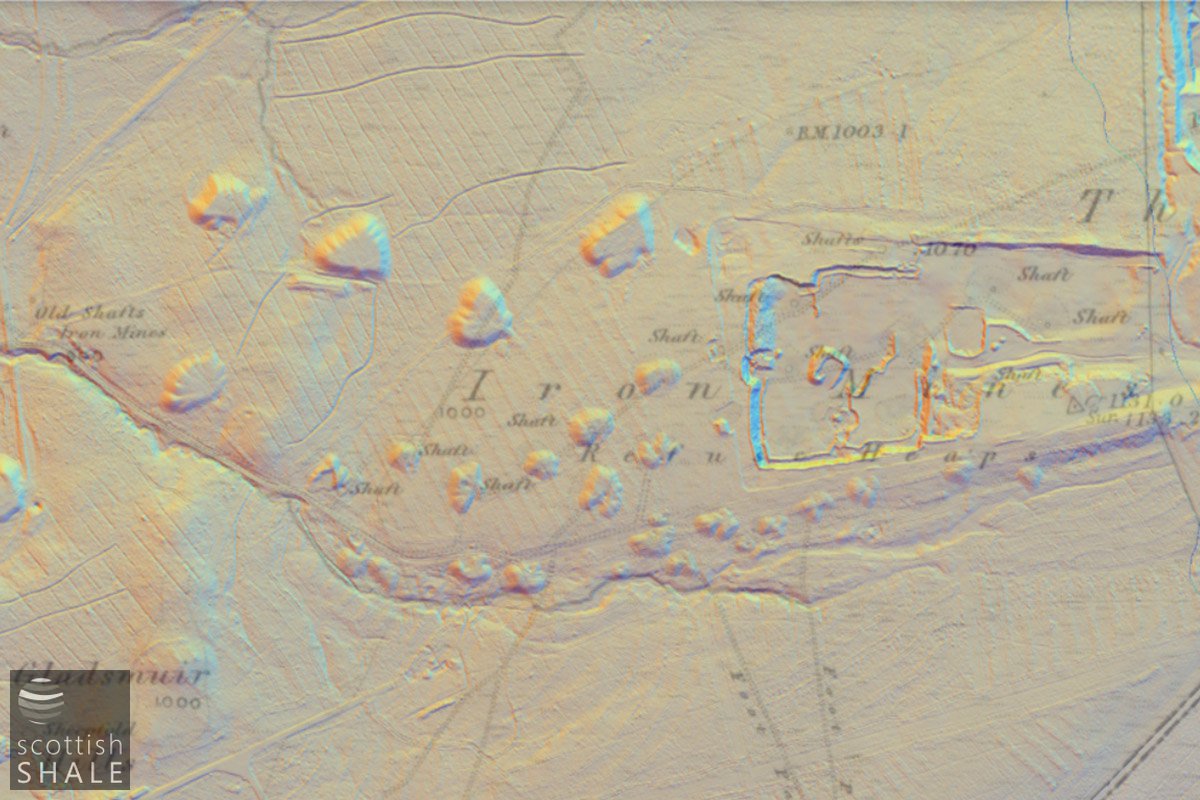 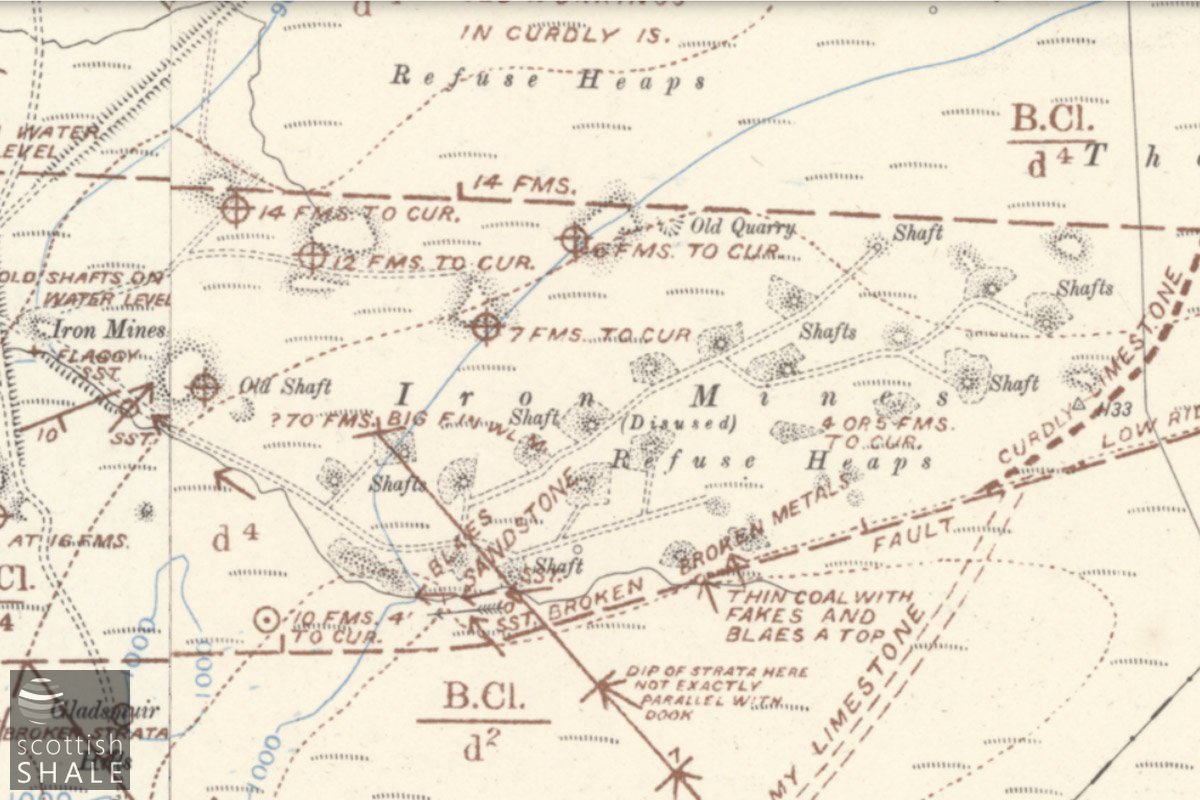 The history of the early ironstone working at Gladsmuir is uncertain. It might be that the Curdly ironstone found at Gladsmuir was first worked here to supply the Wilsontown ironworks, two and a half miles to the south, which was active between 1779 and 1842. It seems more likely however that Gladsmuir iron first charged the furnaces of the Shotts Iron Company about five miles to the north-west. It's known that the Shotts Iron Company, which was formed in 1802, operated the limestone quarries at Climpy, and in 1812 promoted a bold but unrealised scheme to build a rail-road from Climpy to Shotts by way of Muldron. 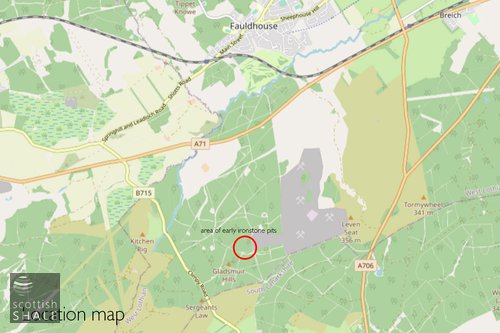 The cluster of pits at Gladsmuir probably date from about 1842 when the Shotts company first worked ironstone in the lands of Muldron.

The Curdly ironstone occurs as a seam of hard nodules about six inches thick contained within a three foot seam of fireclay and black blaes. It seems likely that the seam was first discovered where it outcropped in the shallow valley of the burn. Once the surface deposits were quarried out, pits were sunk north of the outcrop where the ironstone strata lay ten or twenty metres below the surface. There would have been few mechanical aids to assist this small scale mining. Miners would have worked lying on their sides in tunnels little more than a metre high, hewing out nodules and waste with a hand pick in near darkness. Ironstone nodules and surrounding waste material will have been wound up the shaft by simple windlass, or a horse-powered gin, and the waste clay and blaes then dumped around the top of the shaft. The ironstone nodules might have been burnt in heaps nearby to reduce their volume, before being loaded onto carts, (or perhaps the panniers of pack horses?) for transport along the footpaths that crossed the moss. 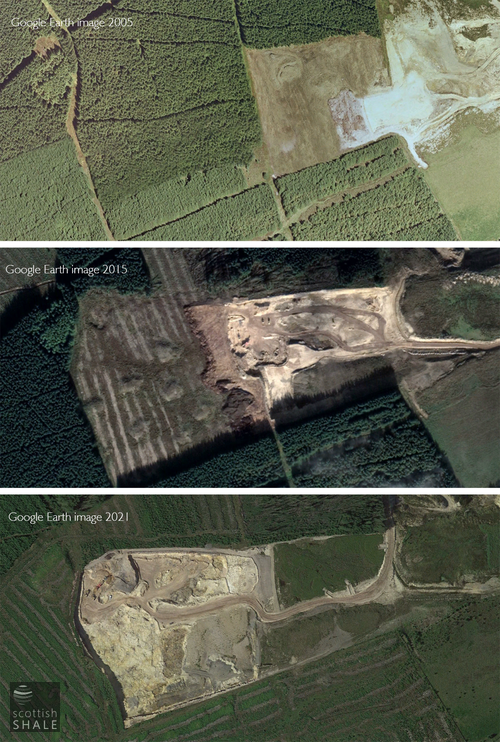 It seems that having dug a vertical shaft ten metres or so deep to reach the ironstone, workings would be pushed out in all directions for little more than twenty metres before the pit was abandoned and a new shaft sunk within a stones throw of the old one. In an age with little concern for safety or the environment, abandoned pits were simply left to decay, and nature has done little to soften the edges of these workings over the following hundred and eighty years. LIDAR images see through vegetation to provide a sharp picture of the spurs and lobes the waste mounds built up by tipping barrows of waste. Pin points on the LIDAR images indicate the position of abandoned shafts, many of which remain visible on the surface as dubious heather-filled depressions.

Over the last twenty years, traces of many of the old pits have been obliterated by quarrying, which has progressively advanced westward. The seam of silica rich sandstone that occurs close to that of the Curdly ironstone is quarried and transported by giant dump truck to the Levenseat works, where it is milled and washed to produce a fine white sand. Unfortunate golfers will be familiar with this product as it fills the bunkers of some of the finest golf courses

The quarry workings are probably about the same depth as the old ironstone pits, and the exposed walls of the quarry provide a cross section of the tough strata through which the old miners would have sunk their shafts, equipped with little more than a hammer and a chisel. Traces of tunnels from the old workings appear to be exposed on one of the quarry walls. The quarry has now reached its maximum extent and is scheduled for closure, and the land surface restored, before the end of next year. New consents are being sought to extend workings a little further to the west which would obliterate a few more of the early ironstone pits, and northward into areas worked during the second half of the 19th century from larger and more mechanised ironstone pits,

Precious few records survive of the iron-fields of Muldron and much of our understanding has to be based on supposition. If further quarrying is to slice through the early shafts and workings, opportunity should really be taken to record these remains and gain greater insight in the history of these short-lived pits and the similarly brief lives of those who laboured in the darkness beneath the wild moors. 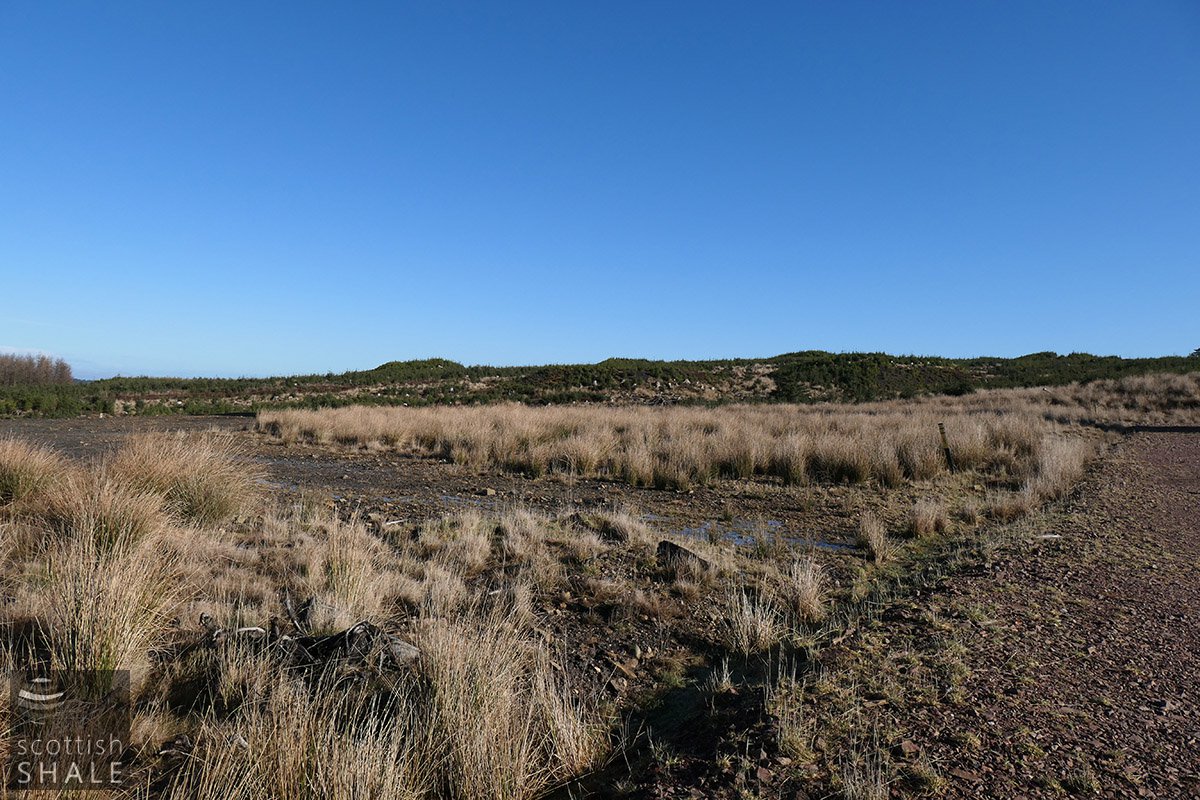 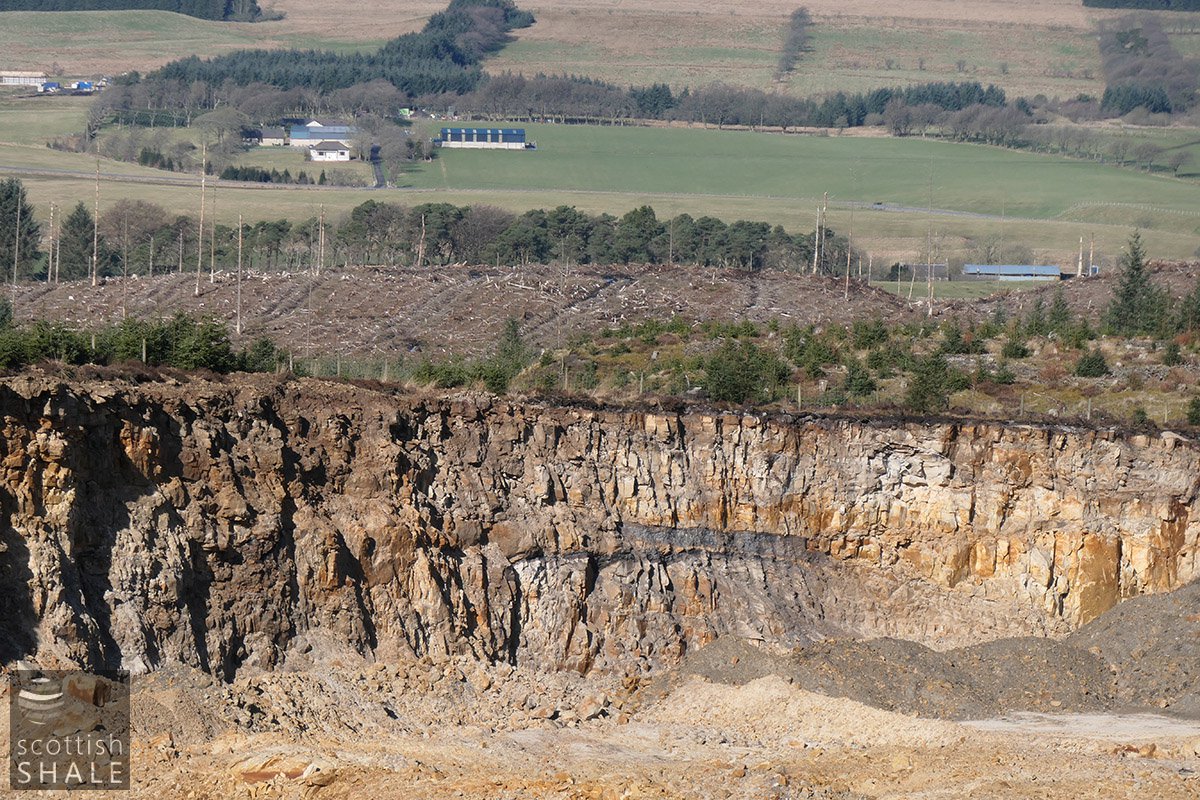 Possible traces of old ironstone workings exposed in the quarry? 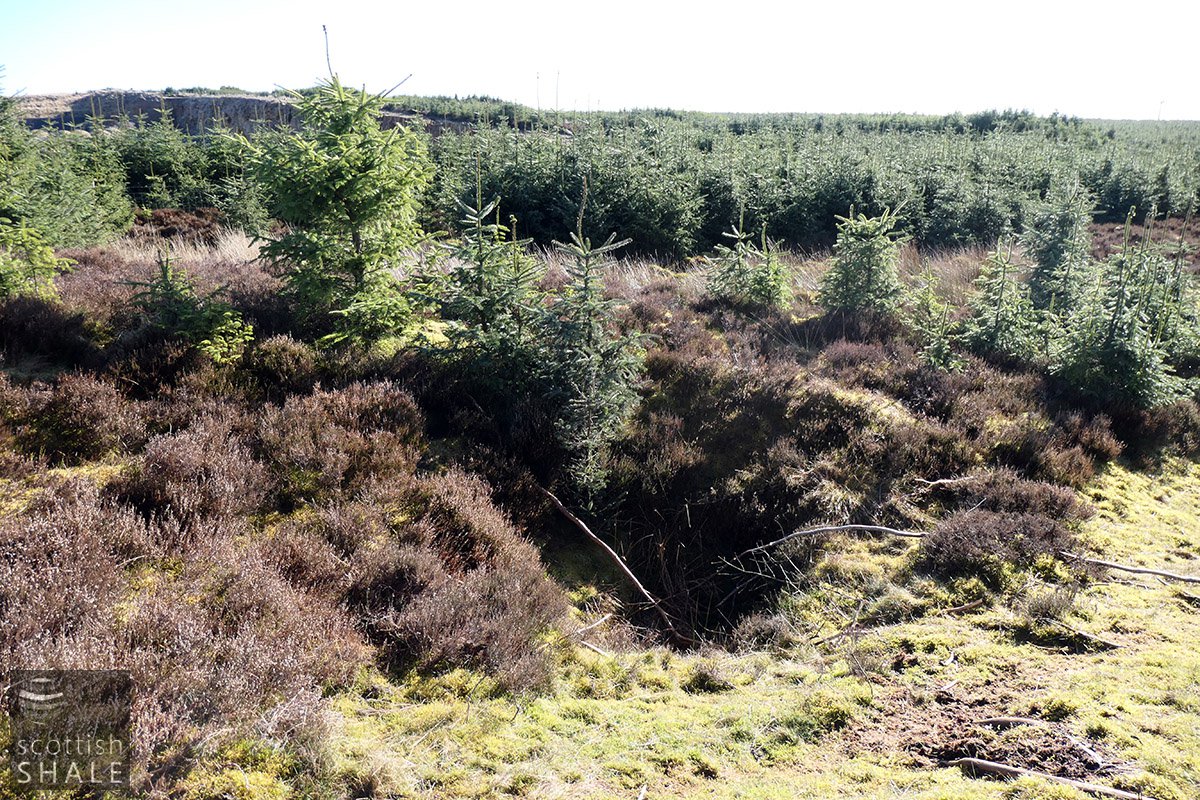 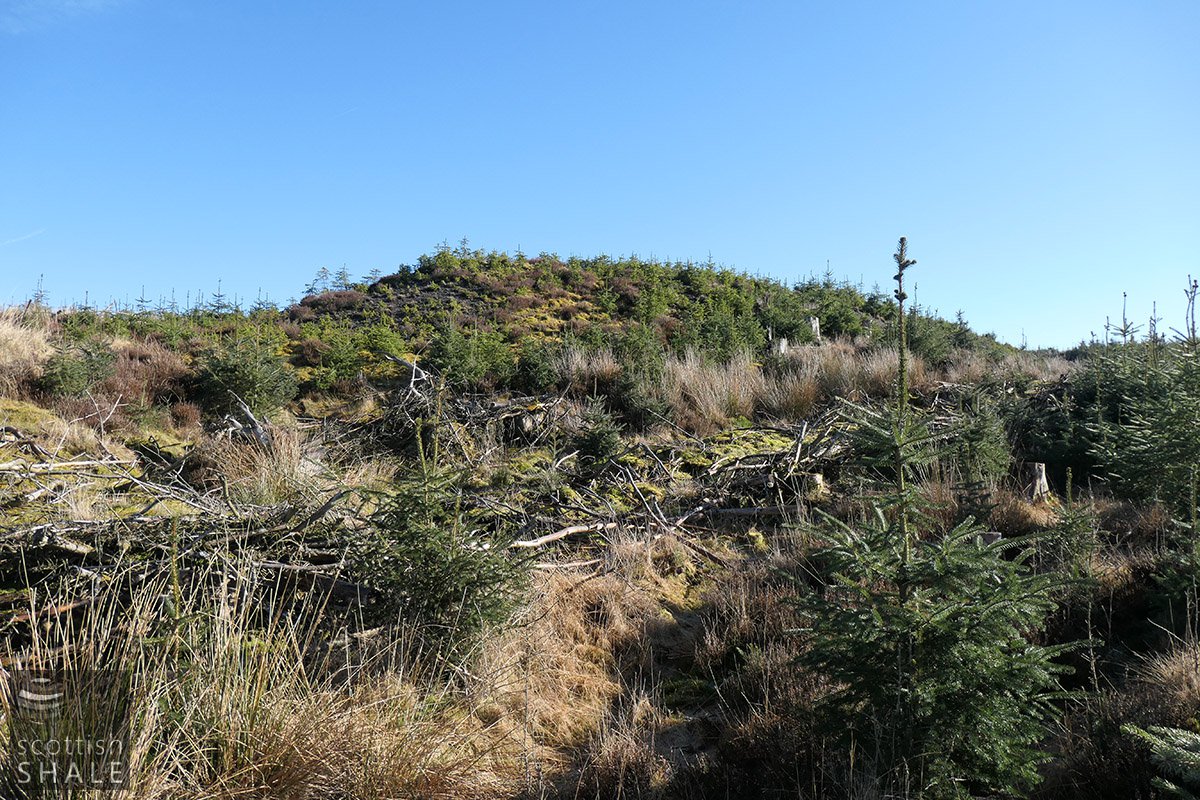 Waste tip of one of the early pits 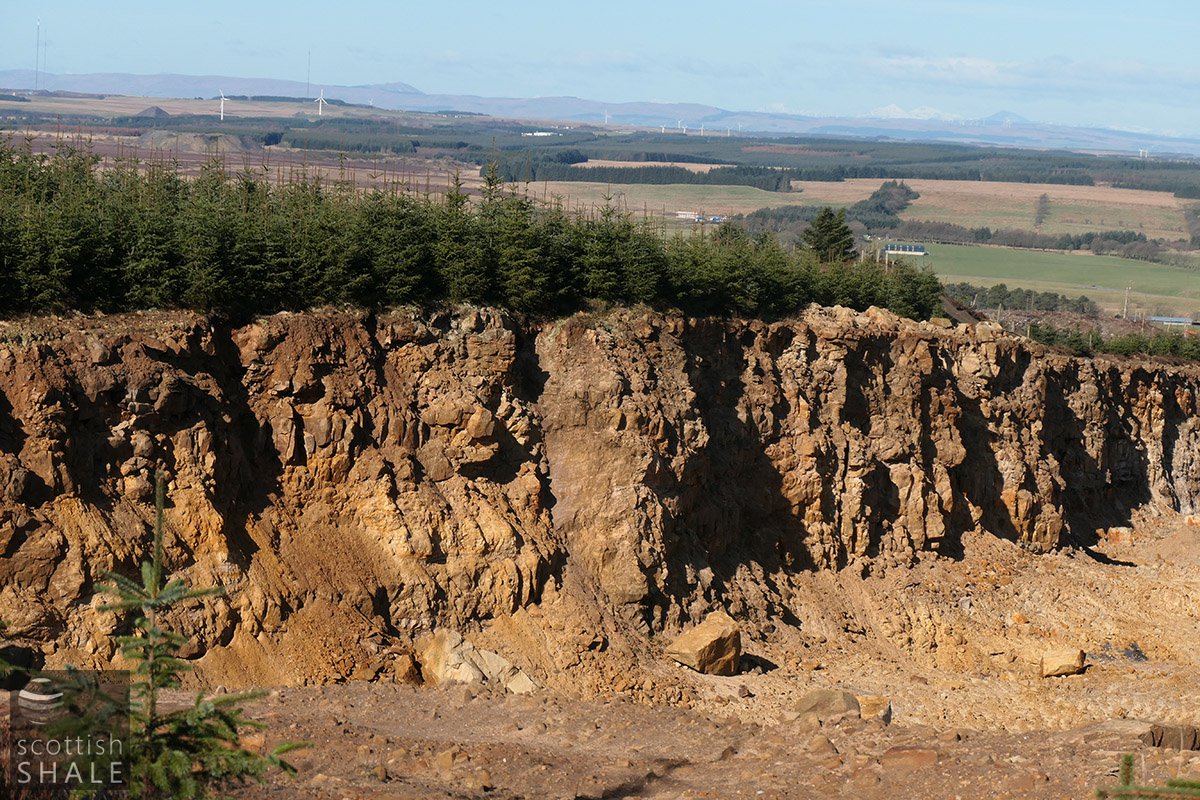 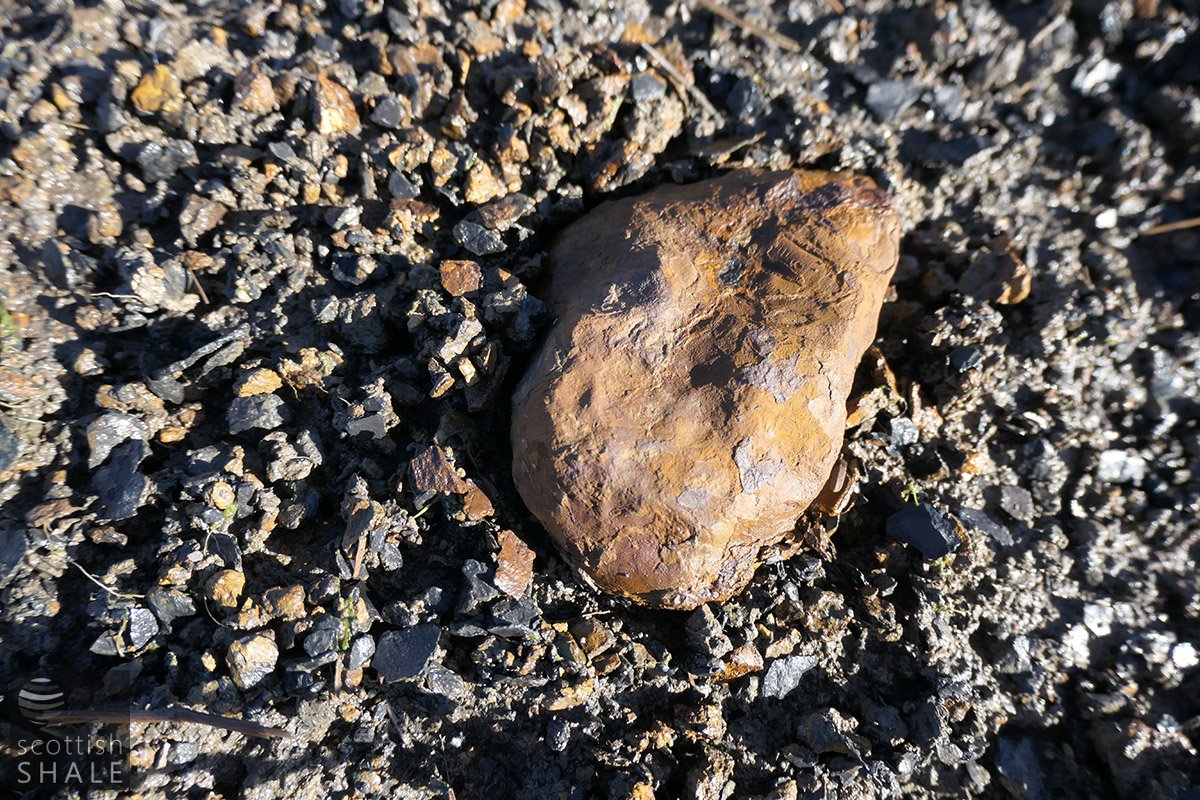 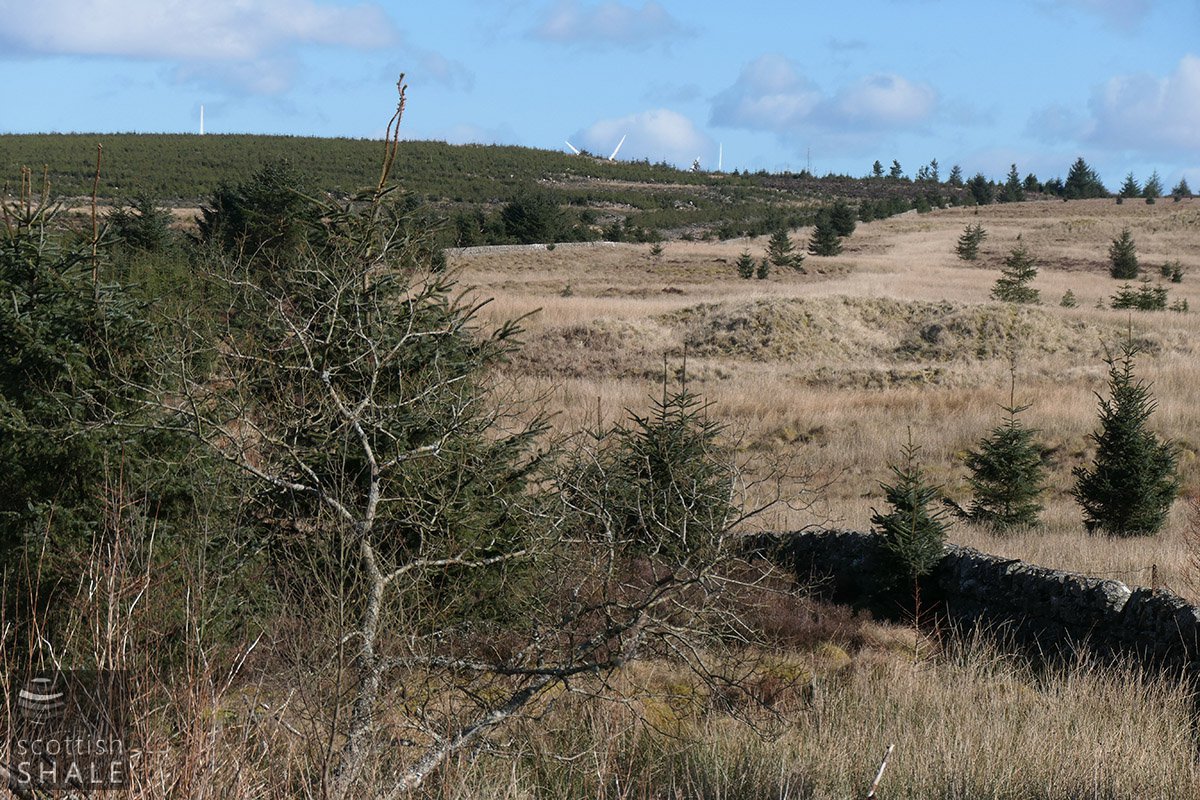 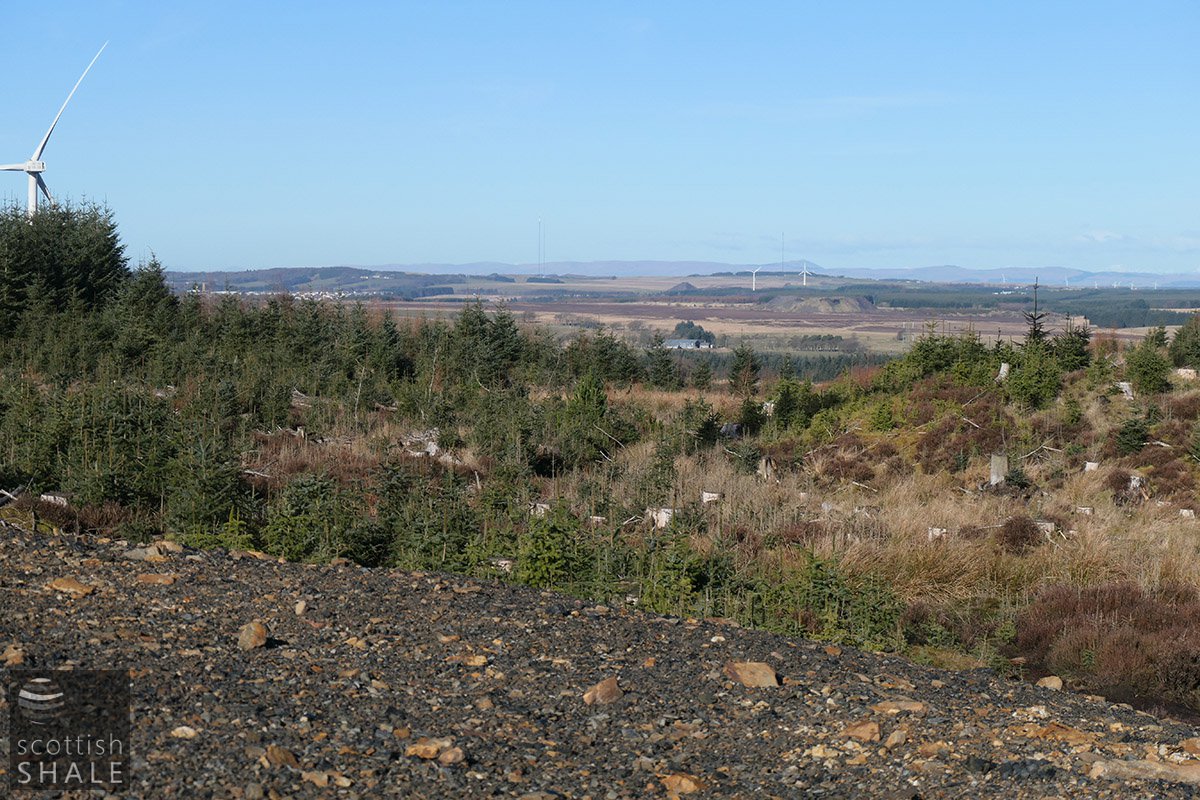 Waste from some ironstone tips have been used to form hardstanding around wind turbines. The view along the burn looking north west towards Shotts.