A Lonely Toll House on the County Boundary 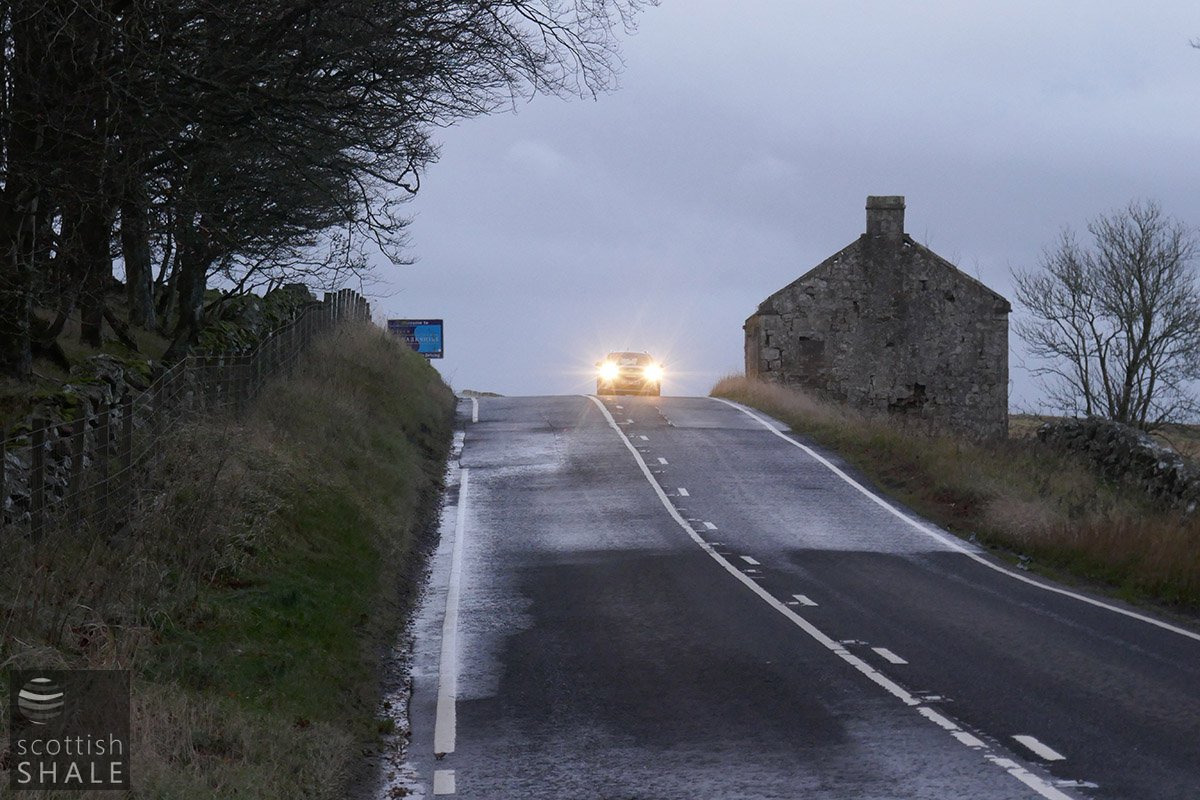 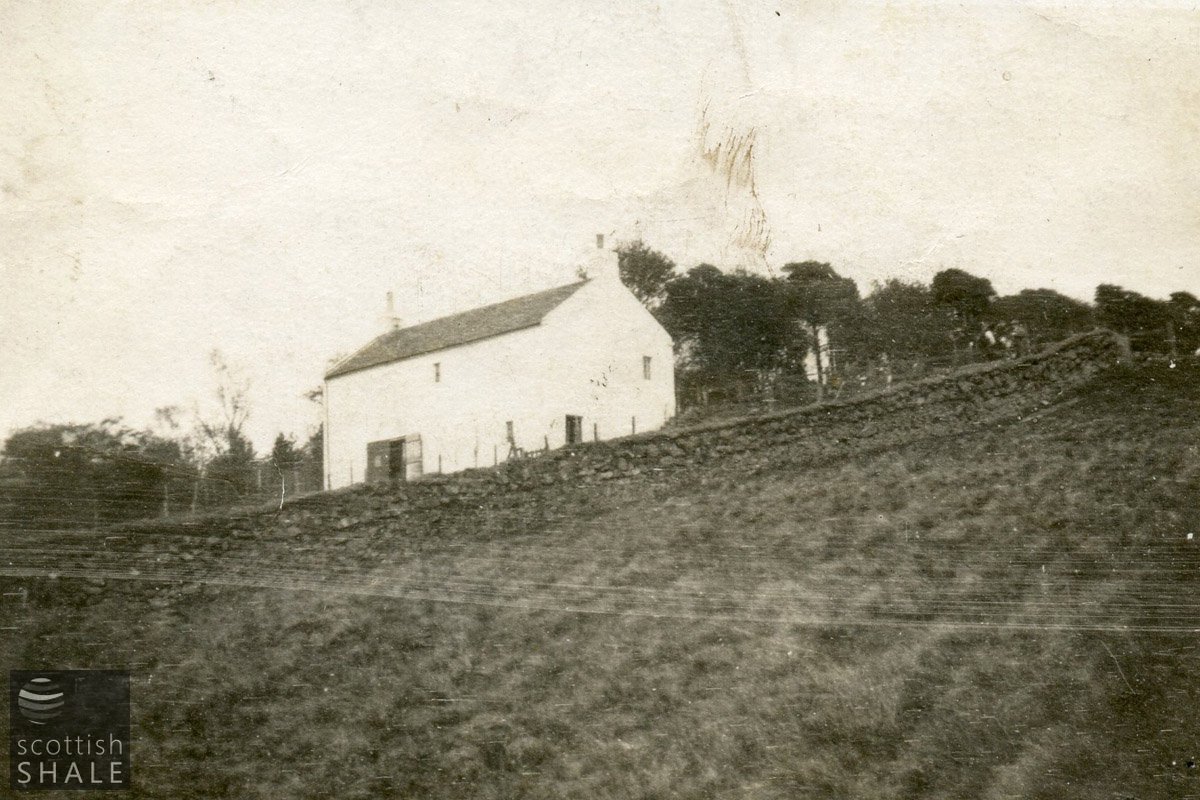 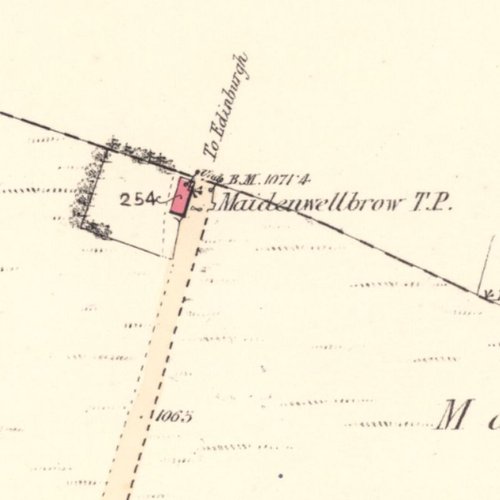 The Lang Whang runs from Edinburgh to Lanark and onwards to Ayr, often following a lonely and desolate route across long stretches of moorland. The road, now better known as the A70, passes from West Lothian into Lanarkshire at a high cold ridge known as the Maidenwell Brow. The county boundary also marks the watershed between east and west. On the West Lothian side, water flows to the River Almond and onwards into the Forth, while Lanarkshire rain flows into the Medwin Water, and ultimately into the Clyde. At the watershed, Victorian engineers meddled a little with the natural order by capturing water from Maidenwell springs – once the source of the Medwin water, and piped it eastward to enhance Edinburgh's water supply.

Maidenwell Brow was also the boundary between Turnpike road authorities. On the Lanarkshire side, the route administered by the Corsethill Road Trust headed west seventeen miles to Carnwath, Ravenstruther and Lanark The toll house at Maidenwell Brow seems likely to have been built when the turnpike road was first opened in the 1770's. The solid little building was built at a desolate and exposed spot where the road reached its summit and where the land sloped steeply down towards the watery wastes of Cobbinshaw Moss. A single storey faced onto the road, but the side walls followed the slope to expose two stories along its northern elevation. A sturdy stone wall provided a little shelter to the sloping garden where the toll keeper would have grown vegetables to feed his family.
It seems that little traffic ventured along the lonely stretch of road, as the toll bar yielded less income than almost any in the district. The condition of the road was also very poor. As late as 1910 cyclists were complaining that on the Lanarkshire side of the border the road seemed to be surfaced with “bricks, old tiles and discarded Glasgow chimney cans” while passing into Midlothian the road was no better, and apparently made up of broken slates.

Our old photograph shows the toll house with a bright whitewash that would have made it even more prominent at its exposed site. Many of those approaching the toll with its white gates across the road may have sighed at having to dig into their purse in order to pass. At other times however, when the night closed in or as blizzards approached, the toll house would have a welcome place of refuge. While never officially sanctioned, it was often the case that that isolated tolls houses offered warm hospitality, ample drink and a hearty meal.

The turnpike trusts were wound up during the 1880's and all toll gates were dismantled. Maidenwell Brow toll house became just a lonely wayside cottage. By that time, the view across the distant Cobbinshaw bog had been transformed by the shale industry, with a landscape peppered with pit bings, winding houses and mineral railways. It was said that the tall brick stalks of Tarbrax oil works “vomit black clouds of smoke and a foul oily smell”. This intrusion disappeared following closure of the oil works in 1926, when much of the population of Tarbrax village was forced away in search of work. The fresh breeze from the Pentlands was never again tainted.
The lonely toll house was abandoned some time after world war two, and now stands as a gaunt roofless ruin. Years of driving rain has eroded the mortar so you can now view the sunrise through the gaps between the stones blocks of the high gable walls. 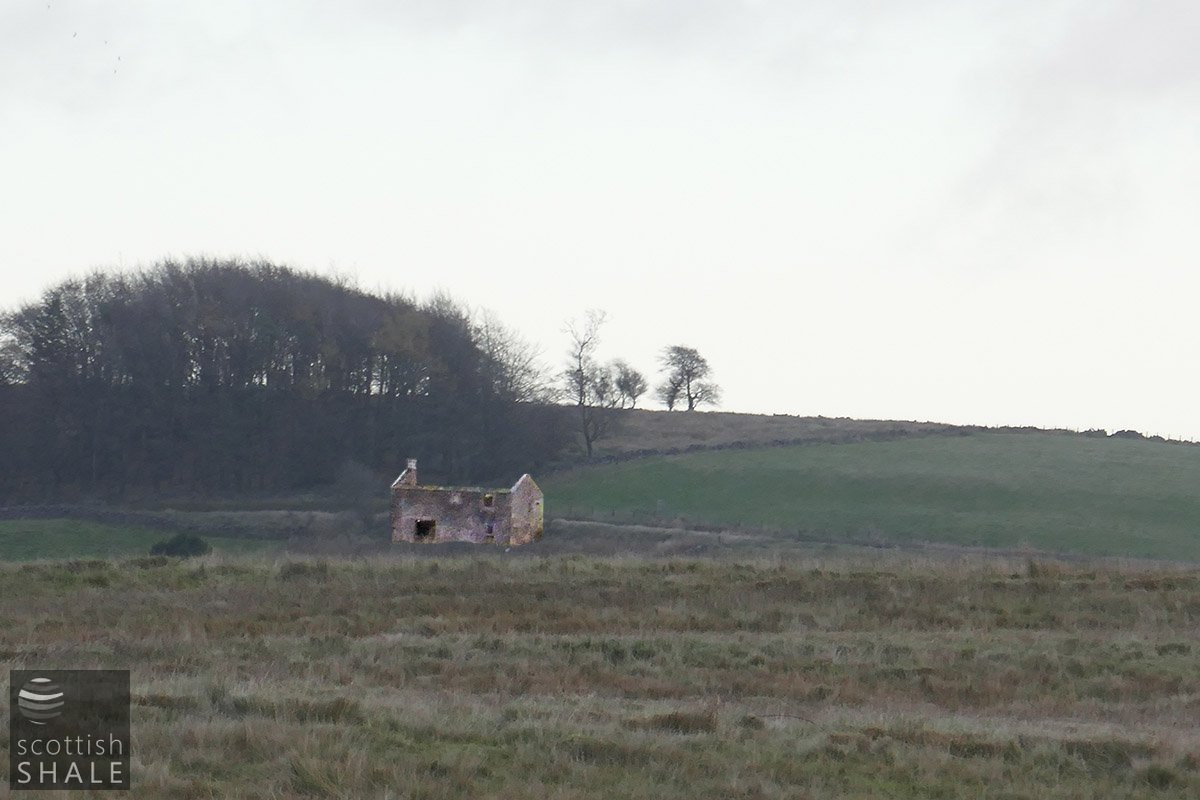 The tollhouse viewed from Tarbrax village 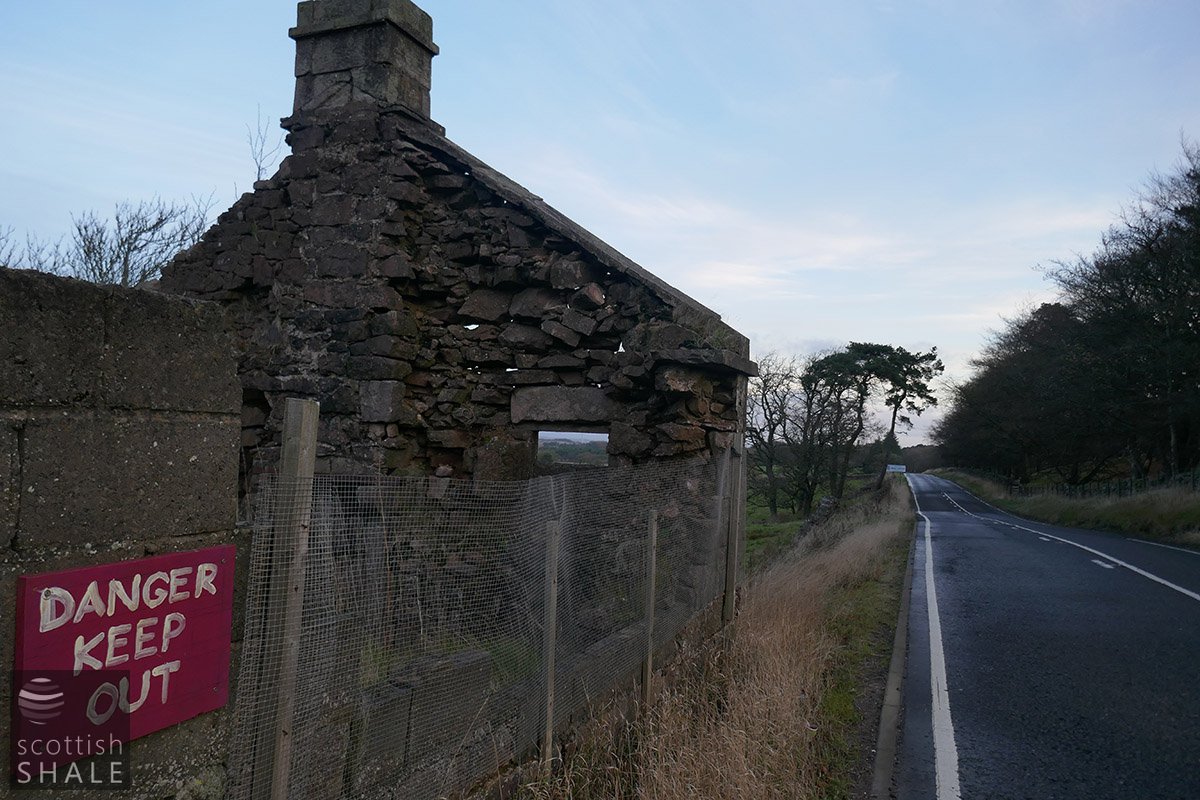 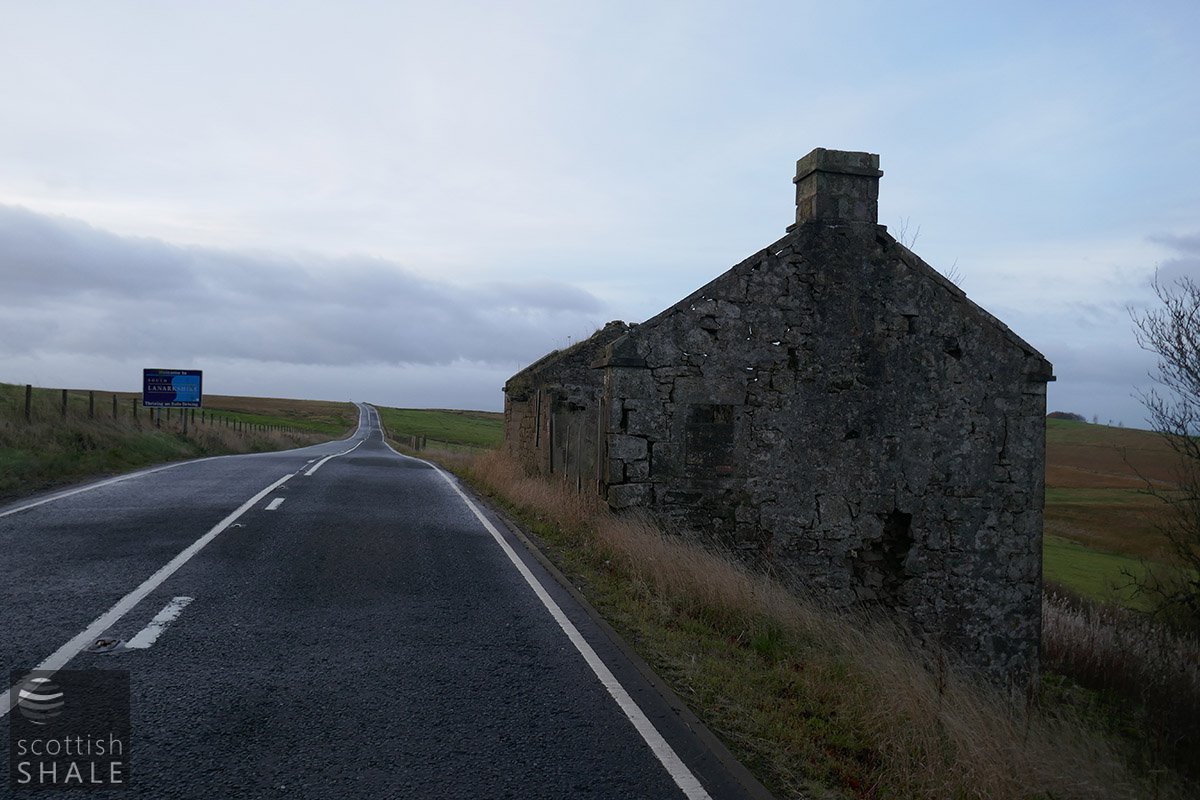 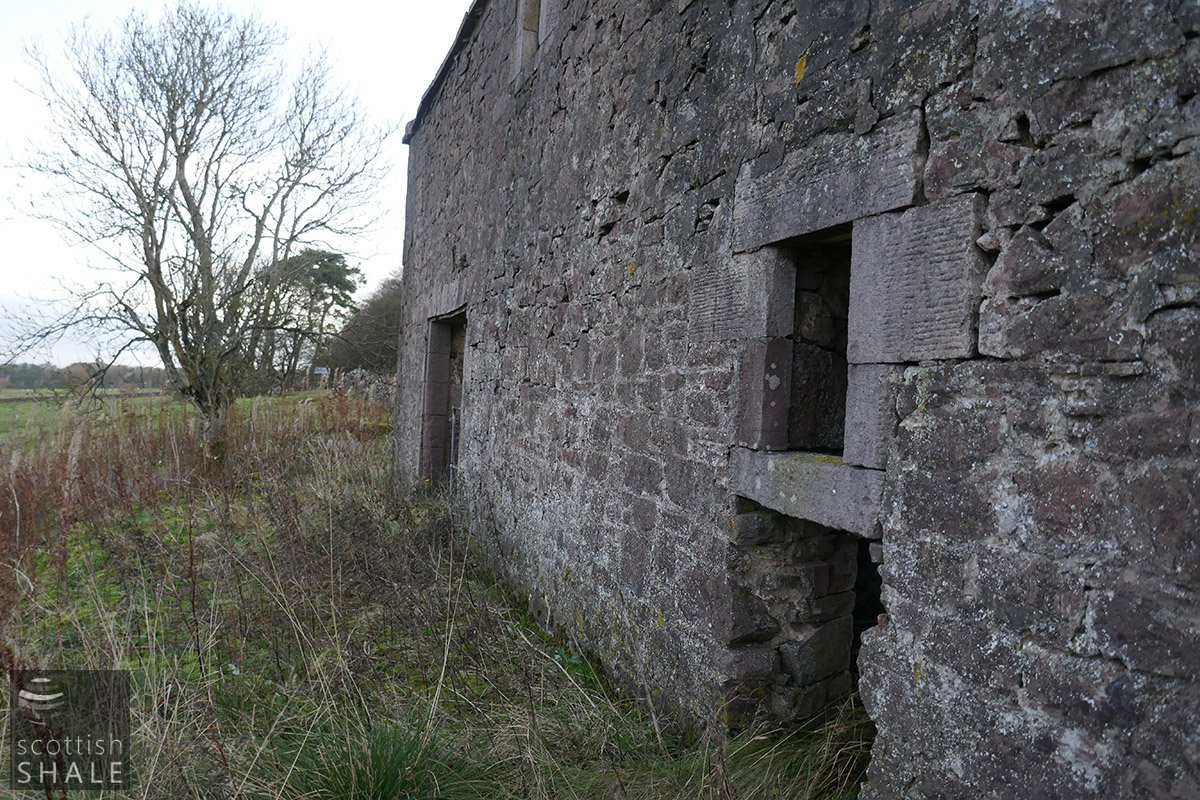 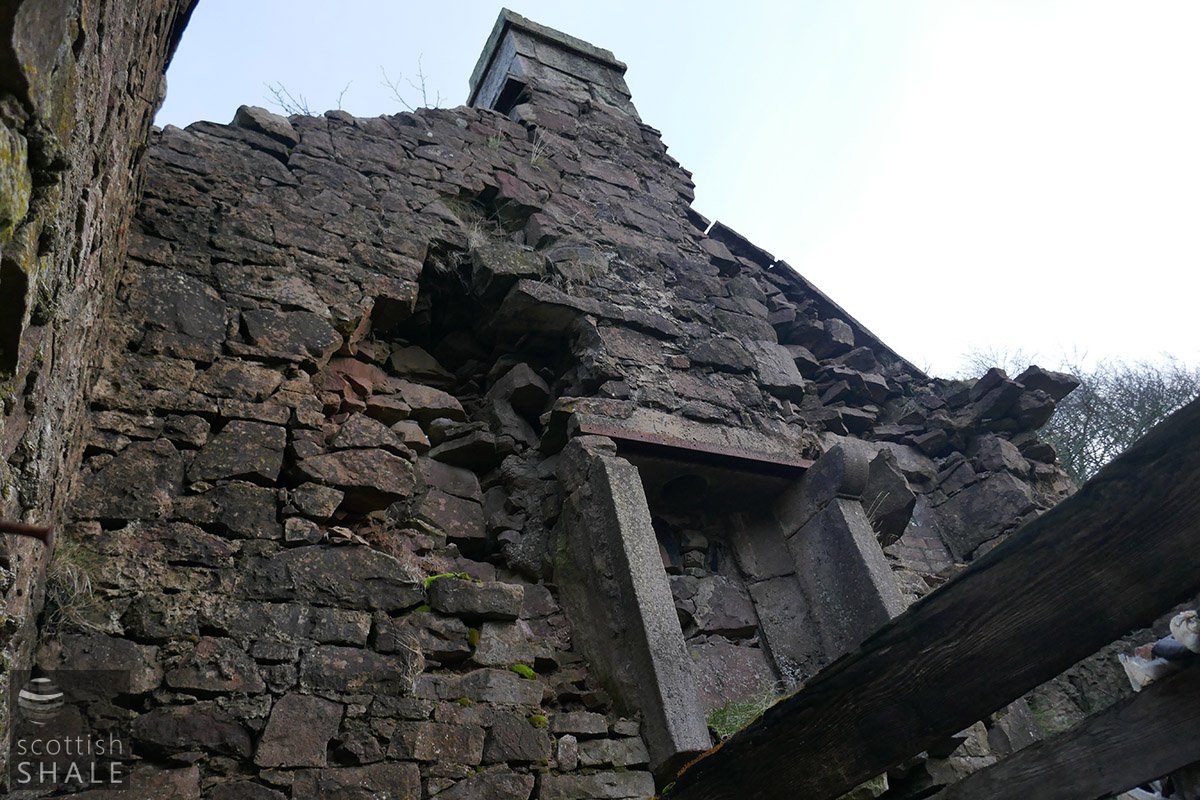 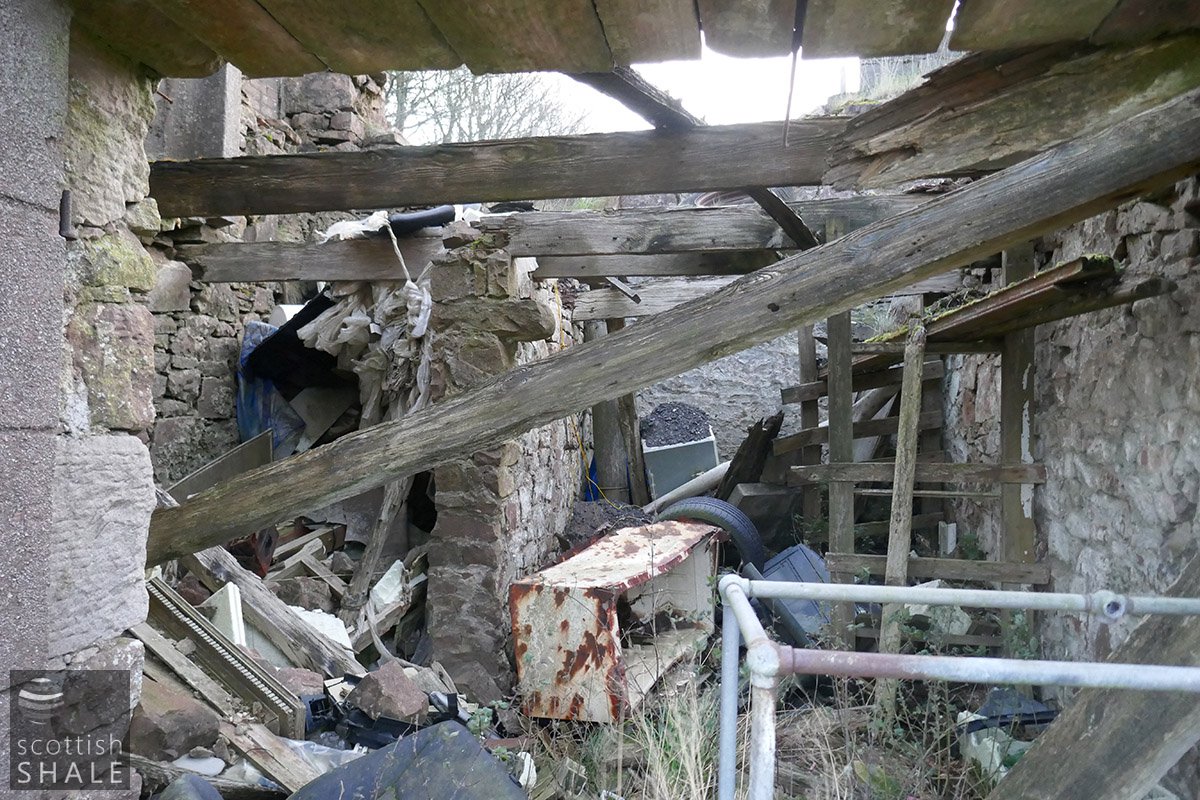 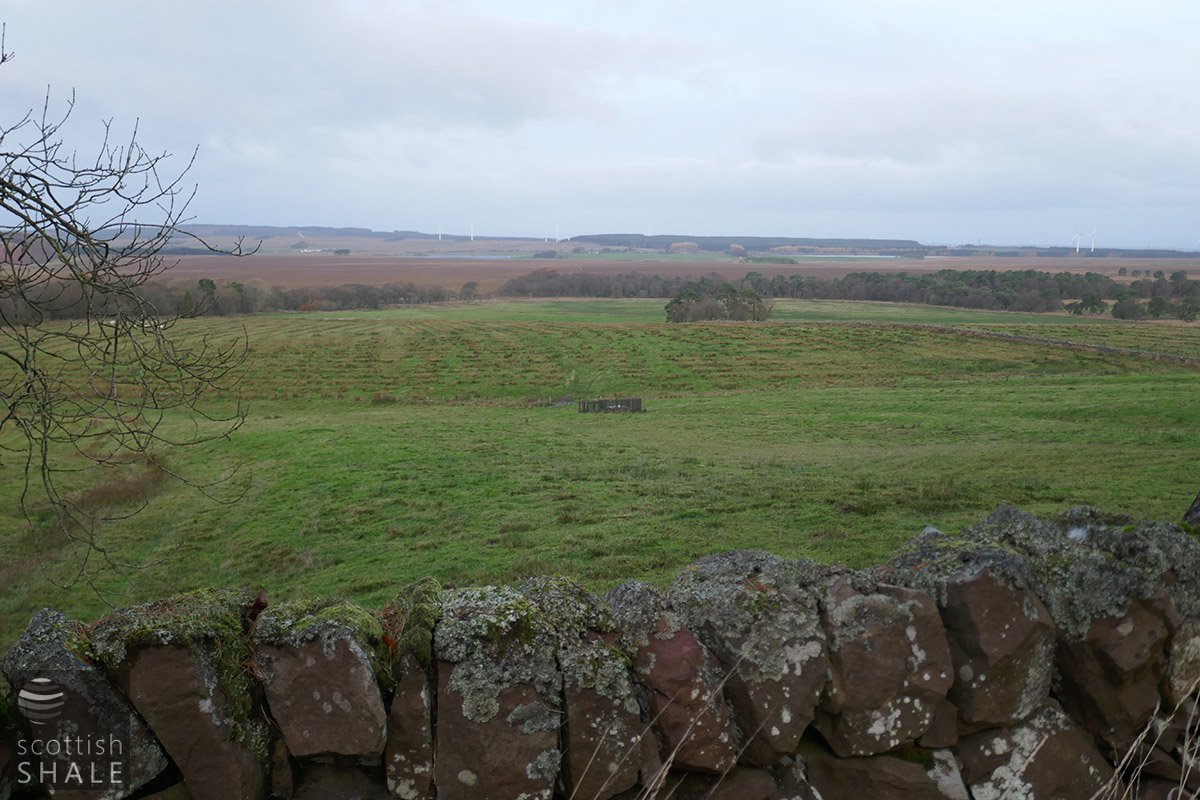 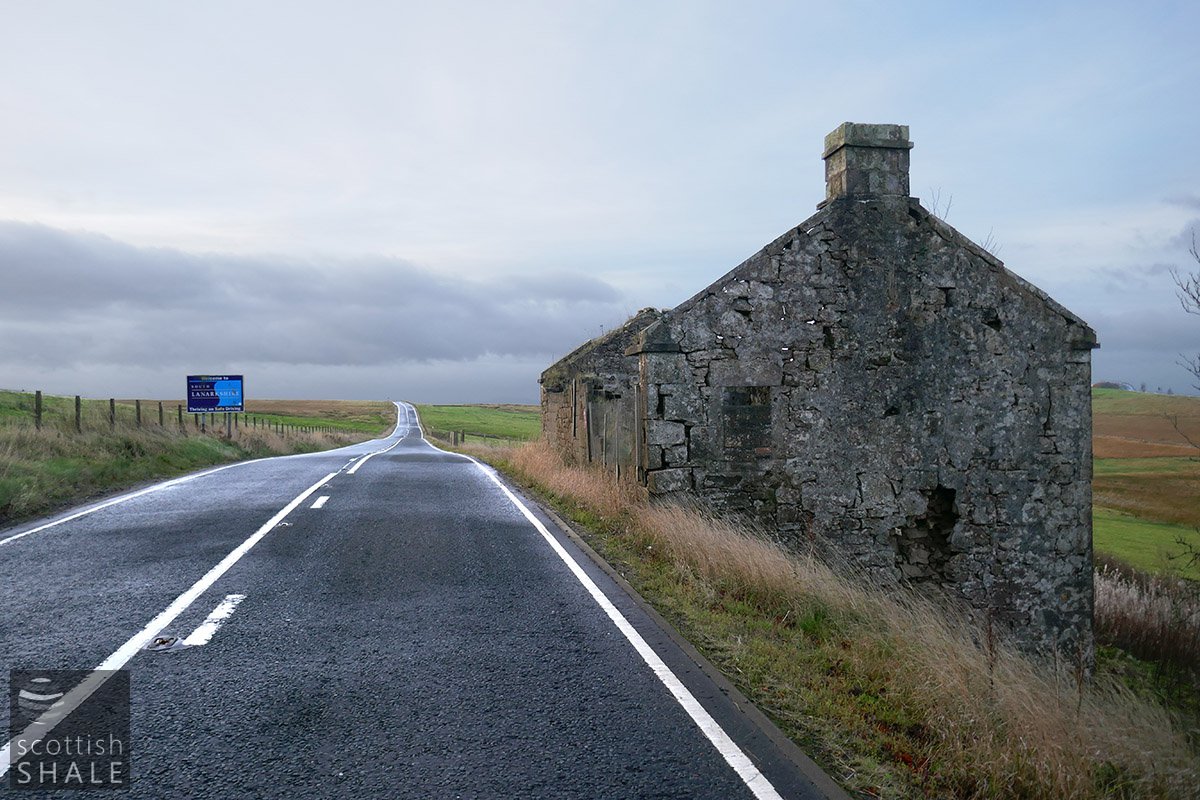