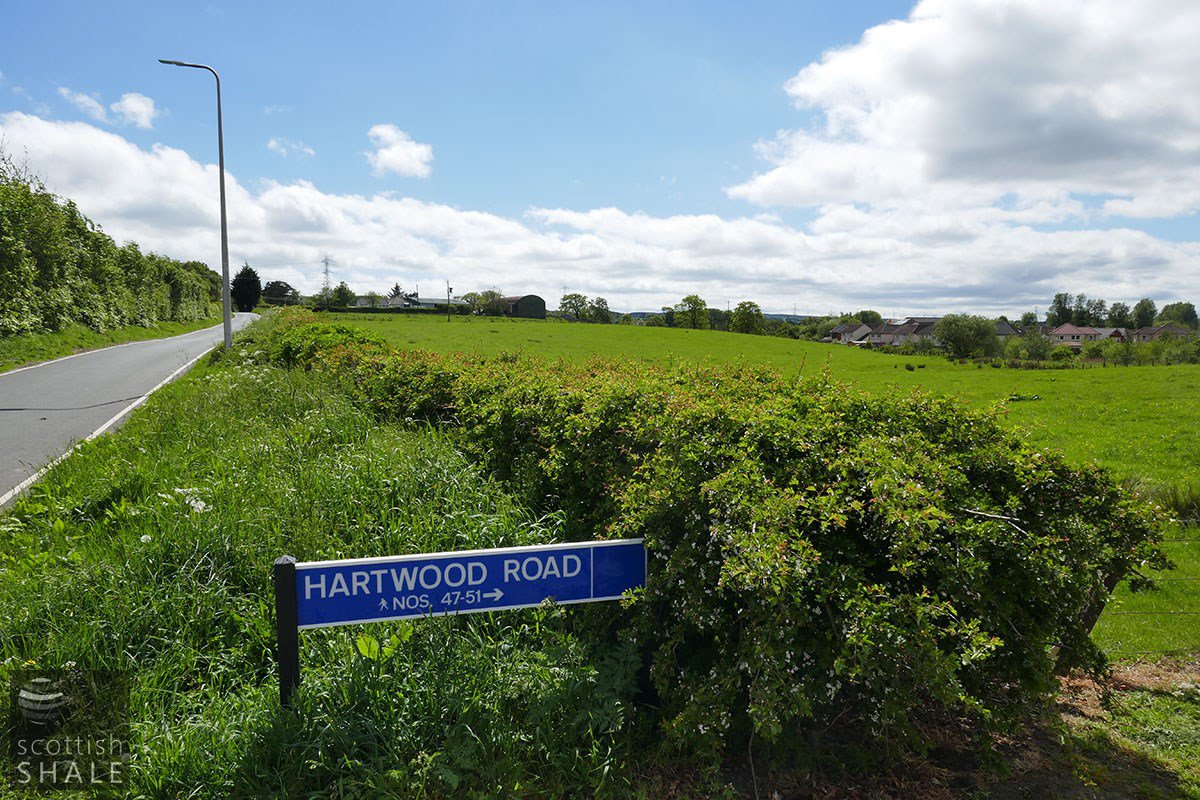 Looking south along Hartwood Road towards the buildings and barns of Bank Park; the likely site of the drilling rig. 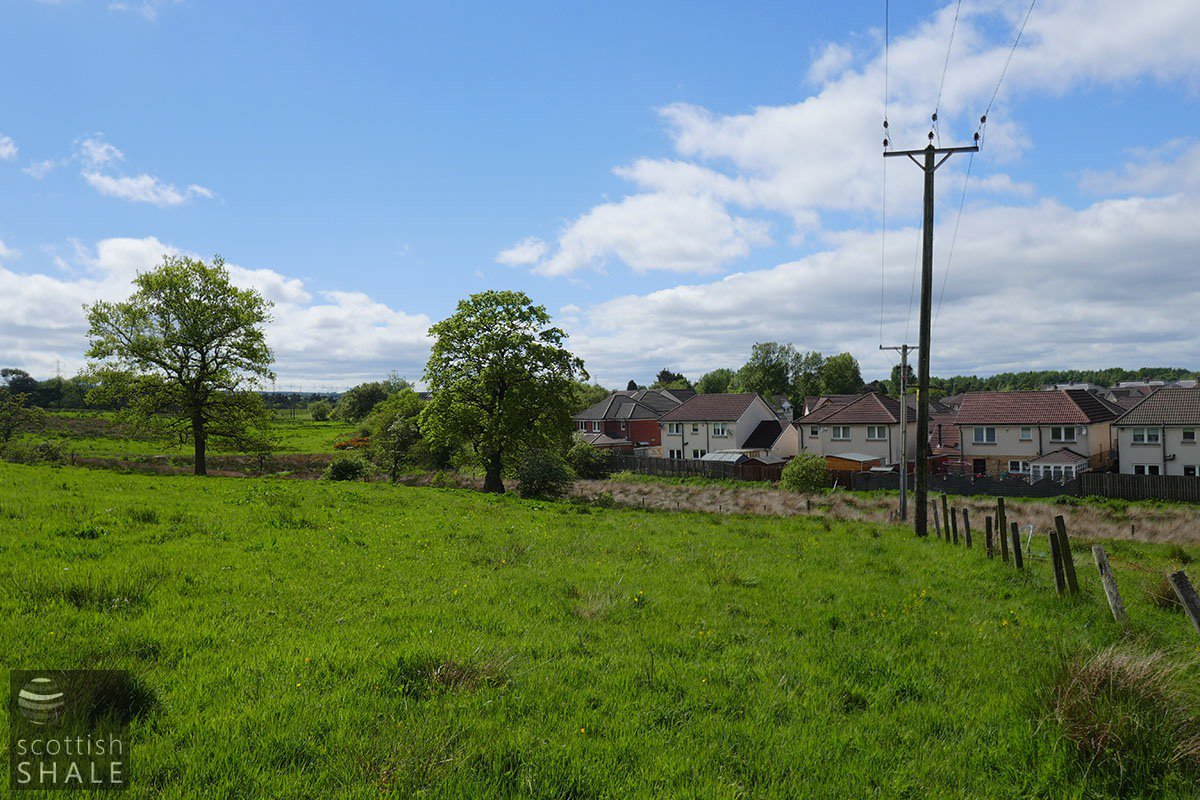 Area shown as earthworks on the 1950's map, with the houses of Burngrange Park beyond. 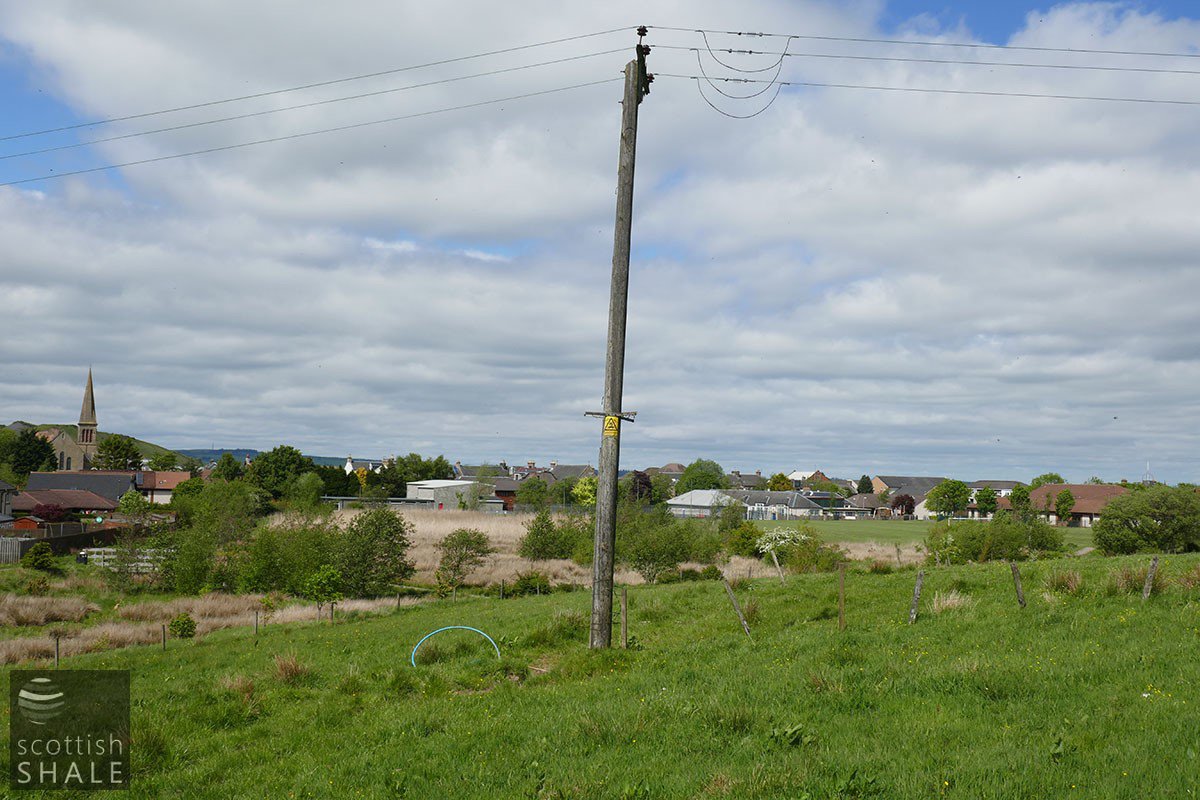 Looking towards Main St. West Calder from near the drill site. 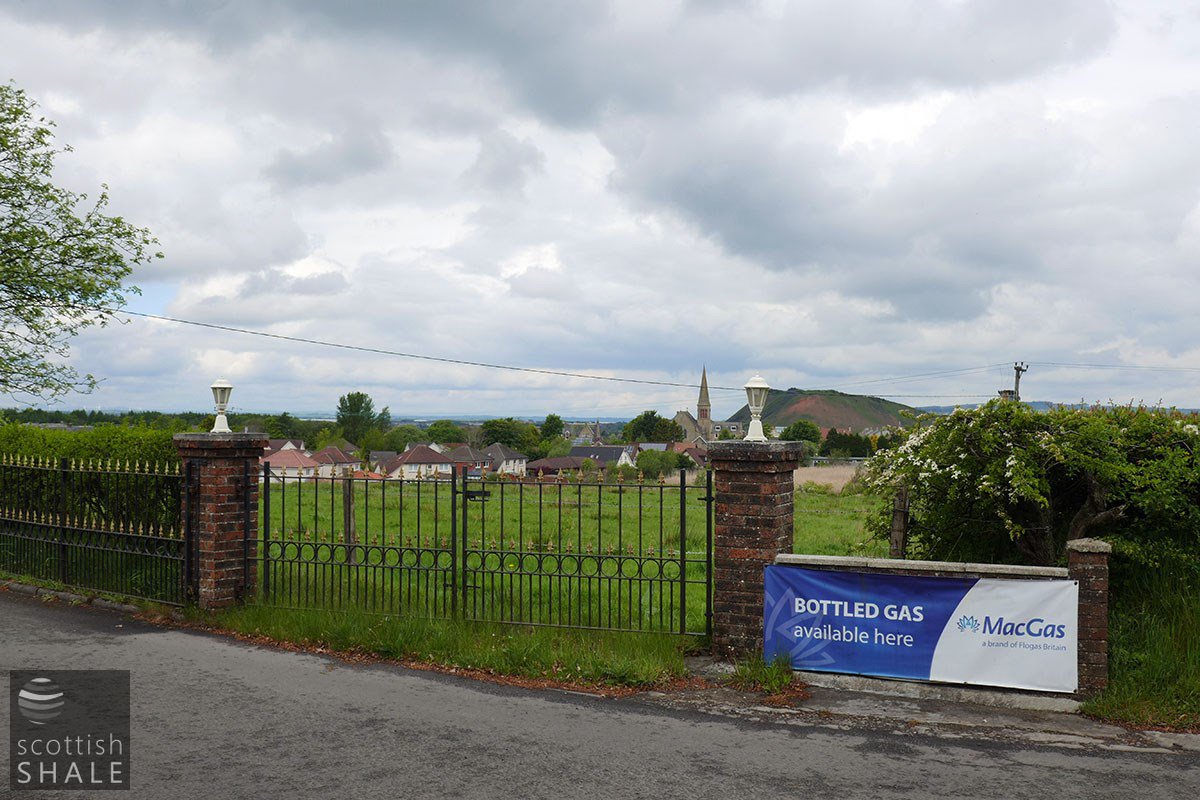 The entrance to Bank Park - obviously a site with proven gas reserves. West Kirk in the background. 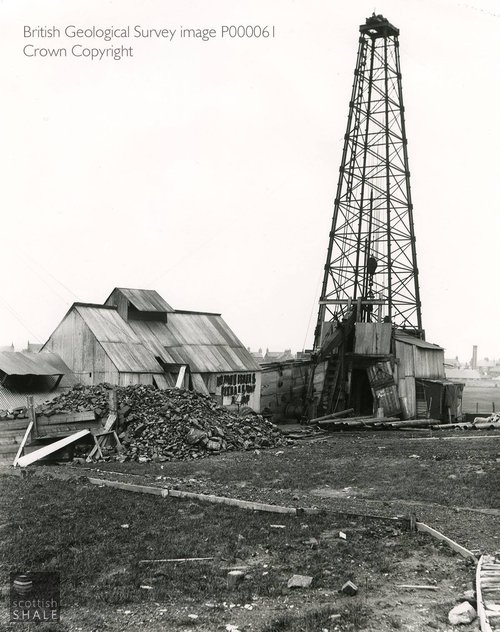 One hundred years ago today, a group of American oil men will have been camped out in a field within sight of West Calder’s Main Street, preparing to drill Scotland’s first oil well

Planning for this groundbreaking enterprise had begun two years previously, at the height of the World War One, when there was a desperate shortage of mineral oil to power and lubricate the machinery of war. At a time when the U-boat menace was having a terrible impact on the imports, the government’s Petroleum Executive sought ways of increasing home-produced oils. Measures were taken to squeeze extra production from the shale oil industry, and oils were produced from coal through adapting the operation of gas works and coking ovens. Plans were also laid to prospect for new sources of oil shale or liquid petroleum by drilling deep bores at various sites in the UK. Drilling much deeper that had previously been attempted in Britain required specialist equipment and expertise, therefore S. Pearson & Son, appointed as contractors for this work, hired a team of experienced American geologists and drilling engineers.

The West Calder was one of eleven bores drilled in the UK, and the first of two in Scotland (the other being near Dalkeith in Midlothian). At that time the surface geology of the shale district was fairly well known, but what lay deep beneath was still a mystery. It was hoped that these unexplored depths contained shale rocks that had released their oil which now lay trapped as liquid within porous strata.

The drilling rig was set up “366 yards S.S.W. of the United Presbyterian Church” in lands owned by Young’s Paraffin Light and Mineral Oil Co. Ltd. By April 1919 workman’s huts had been set up within a field off Hartwood Road, enjoying fine views to West Calder high school, the village gas works, and beyond to West End and Main Street. Over the next couple of months a “huge derrick” was erected creating a “landmark for a wide distance”, and boilers were installed to supply the steam-powered machinery. Drilling began on the 14th June 1919.

The drilling process was fairly rough-and-ready. A hole just over six inches in diameter was created by the chisel action of the drill bit, and after every five feet of progress, the pulverised rock fragments were draw up the bore for identification. This gave a much less precise picture of the detailed arrangement of strata than later diamond bores in which a solid core of rock was brought intact to the surface.

Only a few hundred feet down, a band of tough whinstone was encountered that quickly blunted tools and required chisels to be frequently replaced. Progress was to slow to a crawl on many occasions by layers of this once-molten volcanic rock that has forced its ways between the layers of sediment.

At about 300 feet down, a thick band of good quality shale was reached, which local mining engineers identified as the Dunnet shale. Another 100 feet down, the poorer quality Under-Dunnet shale was encountered. Continuing its long descent, the bore cut through a complicated layer cake of sandstone, limestone, and unproductive shale, and great thicknesses of volcanic ash. 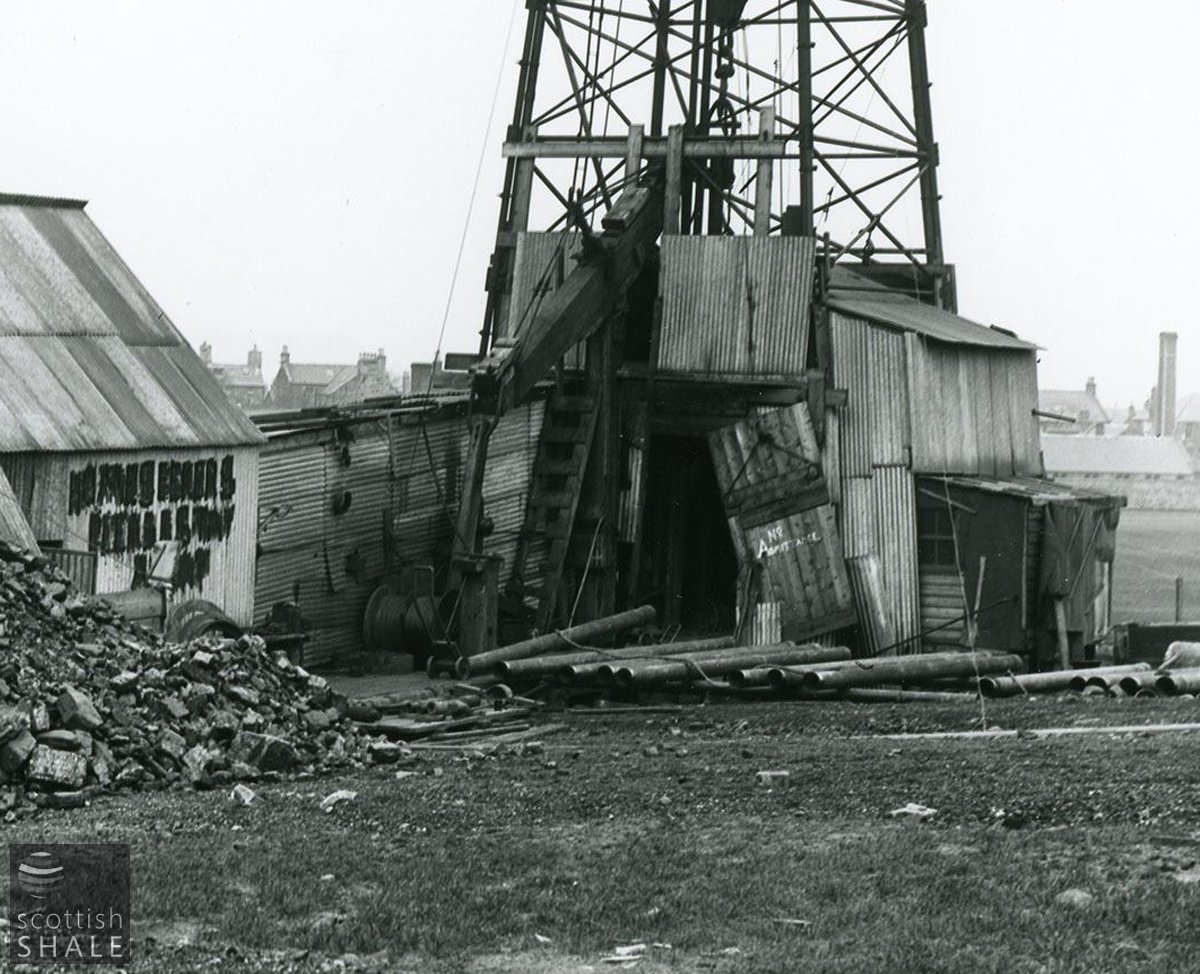 Close-up of the wonderfully ramshackle well-head.
Something has been painted on the corrugated iron walls of the engine house, and then seemingly painted over. Something like "No Meseekers"?; all rather intriguing. There's plenty of coal to fuel the boilers, and tubes to line the well. It's hard to reconcile the buildings on the skyline with the surviving buildings of Main St. and West End. Presumably the rectangular chimney is part of the village gas works? 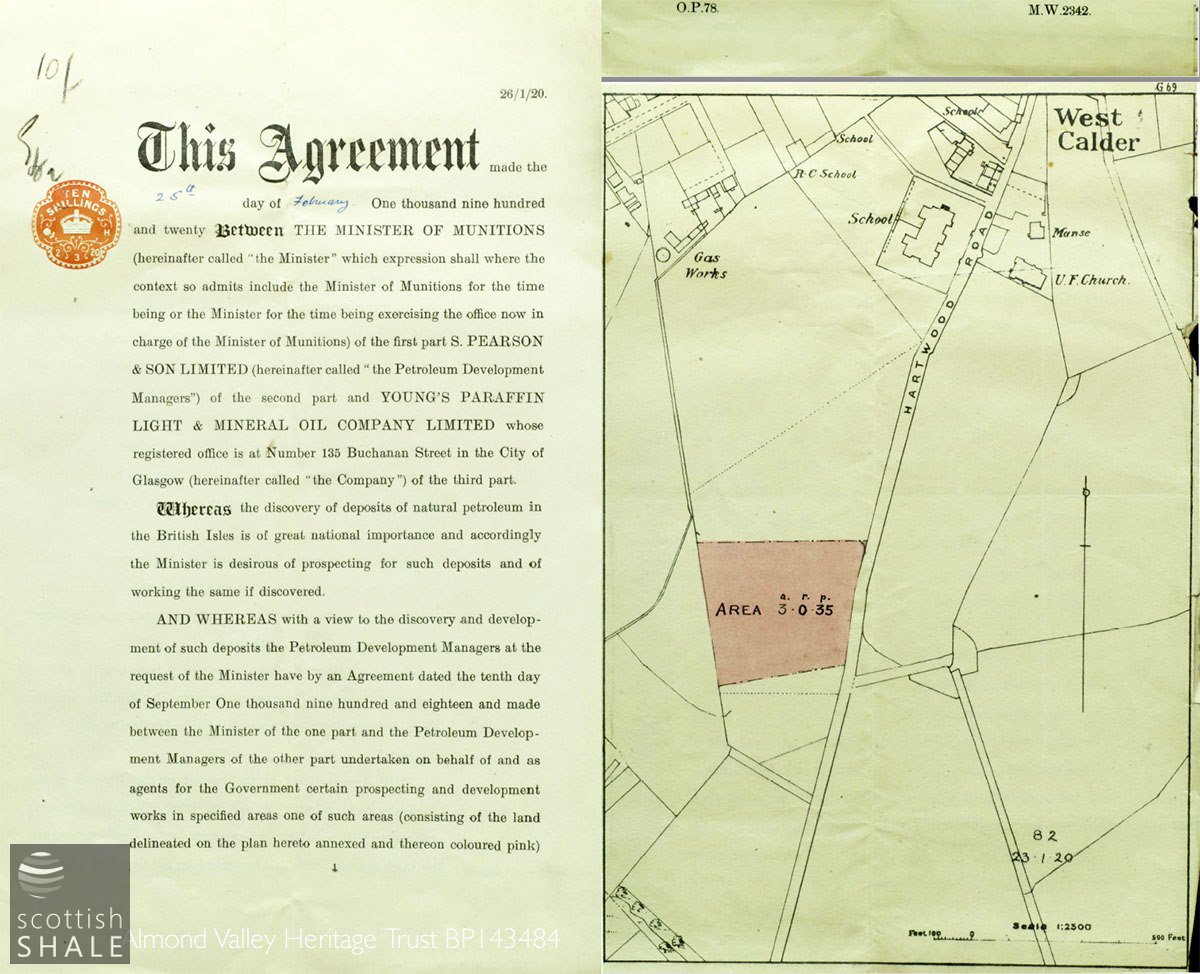 The legal agreement covering use of the land. Work was underway some time before the lease was signed.

Work halted for a period in September 1919 when the American workforce reached the end of their contract, and there was delay in recruiting a new team from across the Atlantic. Progress continued throughout the spring and summer of 1920, and on a number of occasions, traces of oil and bitumen raised hopes that a big discovery was only a few feet away. By September 1920 a depth of 3,844 had been reached, but work was stopped once again by a shortage of steel tubing, and staff were diverted to the more promising bore at Dalkeith. A little further progress was made early in 1921, but on reaching 3,924 feet it was concluded that the bore had passed through most of the thickness of the shale measures, and there was little point in continuing. The work was formally abandoned in October 1921, although it took many more months to draw up the pipes lining the well and pack the bore with clay and concrete plugs to prevent danger to shale mining in the area

Most local mining engineers were not surprised at the American’s failure to find oil. Their everyday experience gave insight into how much of the shale strata had been destroyed by ancient volcanic action, and how the many faults that criss-cross the shalefield make it very unlikely that any liquid petroleum remains sealed at depths. The bore did however provide new insight into what lies beneath the shale workings; information that remains relevant today in assessing the potential for fracking.

The discovery of the Dunnet seam relatively close to the surface led, in 1935, to the sinking of Burngrange pit, just 280 yards west of the petroleum bore.

Our lease plan shows the area of land on which the derrick was set up, but does not pin-point its precise location. Earthworks shown on the 1950’s OS map, (now been flattened and grassed over), might mark the site of the bore, or perhaps the coal yard at Bank Park was subsequently built on this historic site?

Lease map compared with 1950's OS map and recent aerial view. The circle marks earthworks that could represent the location of the derrick or associated buildings. Map images courtesy National Library of Scotland.