Houston Colliery sited beside the great Edinburgh to Glasgow road, just across the road from Houston House. In addition to the engine house, shaft and pump, the map shows a further "old shaft" and pump. Doubtless the layout of the colliery will have changed considerable during the seventy years or more in which it was active.

Golfers teeing off at the third hole of Uphall golf course may have little clue that beneath their feet lie the remains of Houston colliery – a pit well-known during the Georgian period, which supplied large quantities of coal to the homes of Edinburgh.

A few seams of poor quality coal occur among the layers of oilshale that lie beneath the eastern part of West Lothian. The Houston coal seam (named - of course - after Houston colliery), was the only one of these seams to have been worked to any extent, and was, geologically-speaking, the oldest coal seam mined anywhere in Scotland. The Houston coal occurred throughout the shalefield and in pre-industrial times was worked in shallow pits where the seam outcropped at the surface. Such early crop pits were widespread in the parishes of Uphall and Ecclesmachan. Houston coal was generally rich in pyrites, and burned with a smoky sulphurous flame that made it unsuitable as a house-coal, or for firing boilers. At Houston colliery however, the seam was split into two parts, the lower being the usual sulphurous smithy coal, but the upper part containing a two-foot thickness of an acceptable household coal.

In 1794, the proprietor of the Houston (or Houstoun) estate placed an advertisement in the Caledonian Mercury seeking to let the coal at Houston, and indicating that “splint and smithy coal of great extent and considerable thickness (occurred) within a few fathoms from the surface” which “can be wrought to great advantage by the erection of a small engine… the expense will not exceed… £200”. It might be surmised that mining was already taking place, but had been hindered by flooding. The advert highlighted the advantageous location of the colliery “upon the new great road to Glasgow by Bathgate & Airdrie”, and referred to plans to construct the Union Canal; “whatever line is adopted, if it does not go immediately through the grounds, it must take their immediate neighbourhood”. It was stated that if no lease was agreed, the proprietor intended to work the coal himself and would seek to engage a “person of knowledge and experience” who would contract to erect the steam engine and attend to sales of the coal. 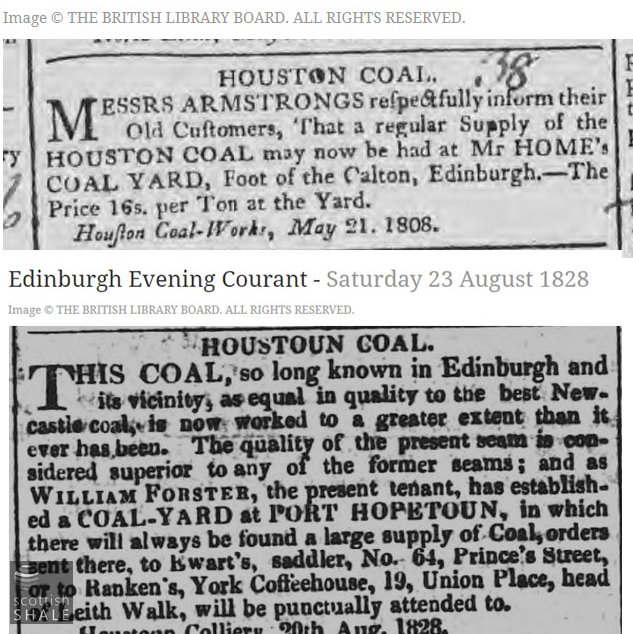 The famous Houston (or Houstoun) coal on sale in Edinburgh. 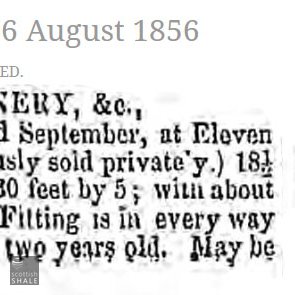 It seems probably that the "pit engine" and pumping equipment at Uphall was sited at Houston Colliery, and might have been installed as part of a short-lived effort to re-open the colliery? 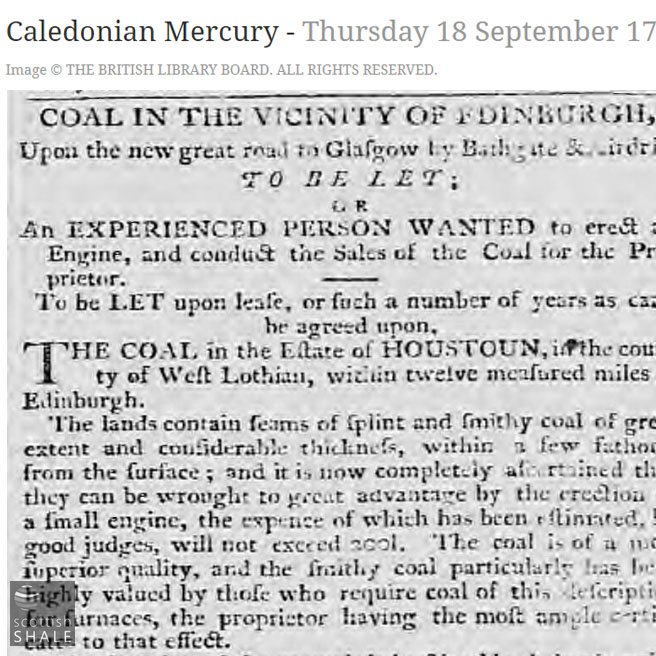 Requiring the erection of a "small engine".

Although the Houston coal may not have been of the highest quality, the easy access to Edinburgh and absence of other local supplies ensured success of the enterprise. There were also references to the coal being exported through the port of South Queensferry. In 1810 a further advertisement to let the coalfield indicated that 100 tons of coal a week were being delivered to Edinburgh and 140 tons sold locally. The Houston coal was described rather flatteringly as possessing “all the qualities of the English coal” and being “quite the nature of Newcastle coal; soft, and easy to wrought, and any numbers of colliers can be got to work it”. The seam was described as four foot eight inches thick (a great proportion of this would have been blaes) at a modest gradient of 1 in 7. The pit was said to be “within 200 yards of the high road” and fourteen colliers houses were included in the lease.

The colliery was recorded as employing 20 people in 1845, but it might be imagined that operations were already on a decline by then, as workings at Houston are recorded to have been abandoned in 1850. In 1855, there were reports that the Houston coal field had reopened, and the OS map surveyed in that year shows that the engine-house and other pithead buildings remained intact, just across the road from Houston House. An advertisement the following year, for the sale of a pit engine and machinery stated to be less than two years old, probably records the end final dismantling of Houston colliery.

In 1893 the Broxburn Oil Company installed an engine-pump and piping from the “Houston old pit workings” to supply Uphall with drinking water. It’s not certain that whether this relates to the original Houston colliery, or later workings of the Houston coal close to Loaninghill bridge.

By 1895, when the new nine-hole Uphall golf course was opened, no trace remained of the once-famous old colliery. 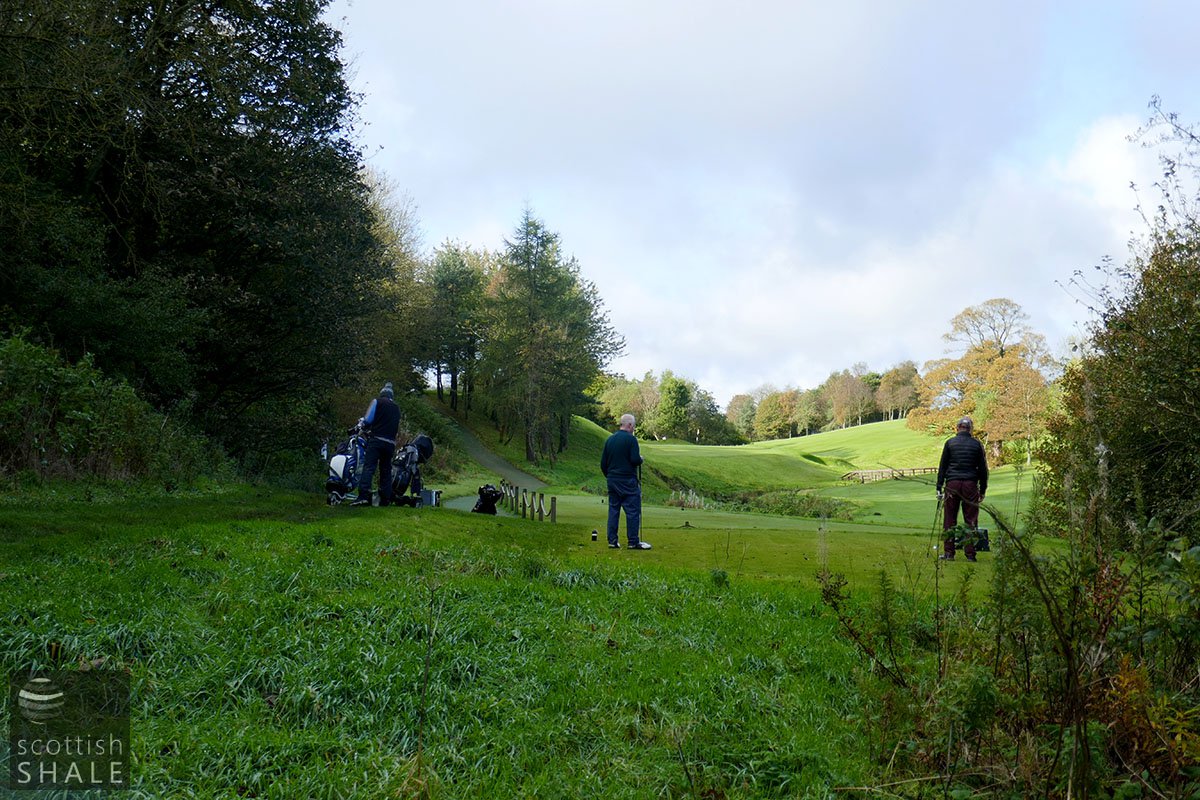 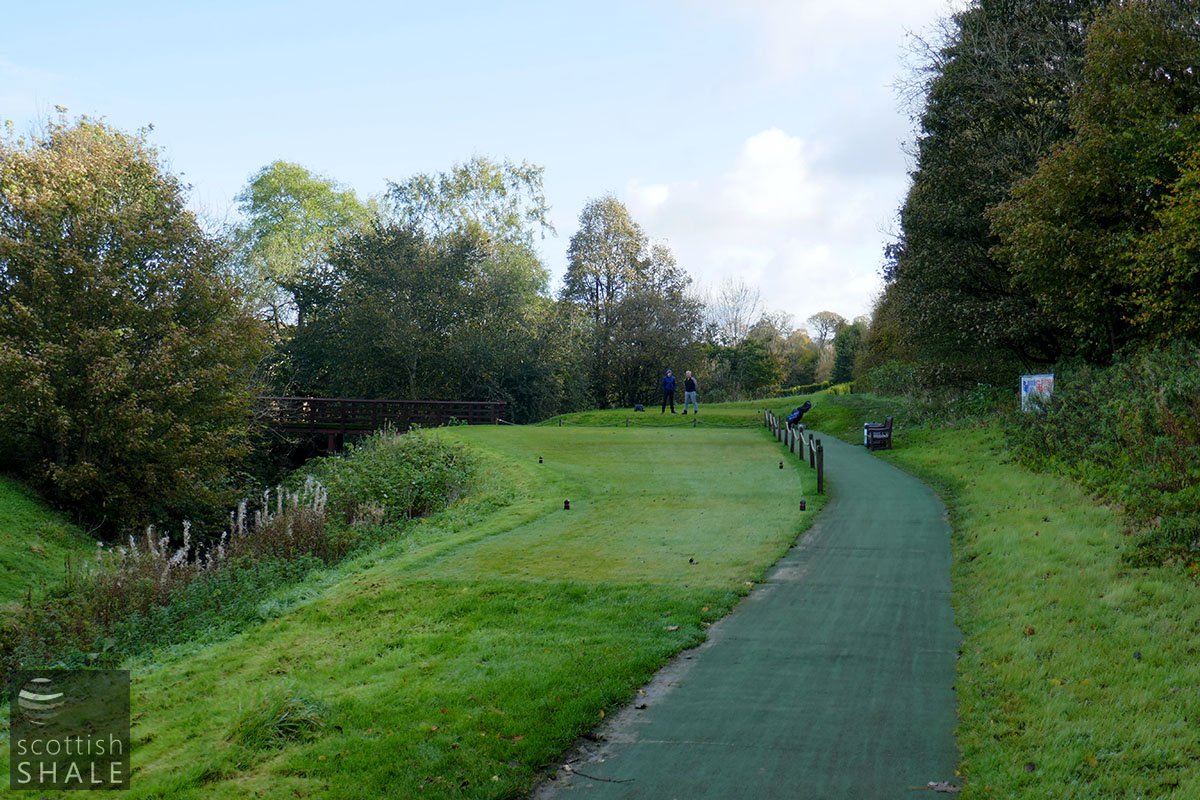 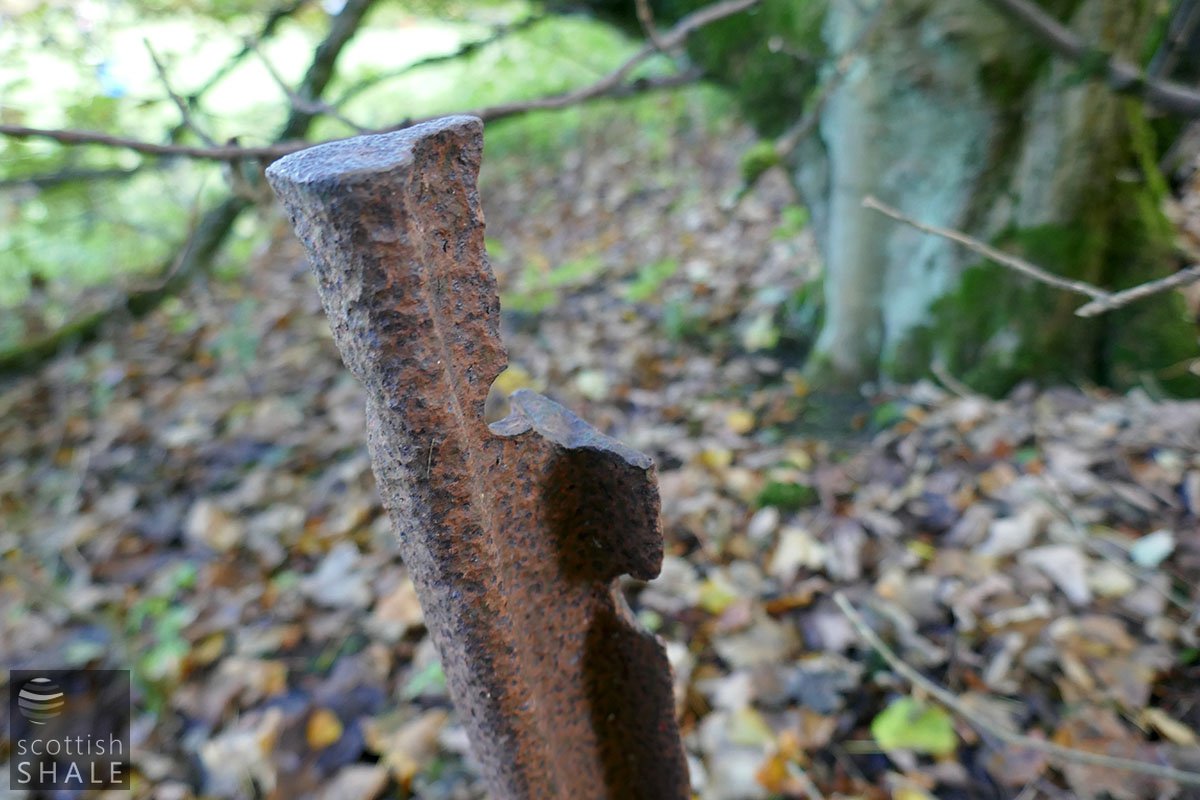 A piece of hutch tramway rail set into the ground in trees between the road and colliery site. It would be nice to think this was a relic of the Houston colliery, but might have planted into the ground anytime over the century since the colliery closed. In mining districts it was common to use old lengths of tramway rail as fence posts.