Pits and a brickworks at Crofthead and Eastfield

A panoramic view from Crofthead No.5 pit bing, with the Pentland Hills on the skyline.

Standing on the bing of Crofthead No.5 pit and gazing westwards, the various humps and hollows of 19th century industry are highlighted by the heather in bloom, which seems to thrive on the iron-rich mining wastes. This area, just to the north of Fauldhouse, was first worked for the Crofthead Slatyband ironstone during the 1840's, supplying the furnaces of Coltness iron works. The 1850's ordnance survey map shows tramways crossing the Fauldhouse to Longridge road to serve many of the Eastfield coal and ironstone pits.

Peter Thornton subsequently acquired the mineral rights and developed the various Crofthead collieries. The bing of Crofthead No.3 pit remains clearly visible although abandoned c. 1900, while the final Crofthead pits, No.5/6 and No.7, survived until 1923, both leaving their mark in the landscape. Crofthead No.5/6 was known as the Victoria pit, while No.7, sunk c.1900 in the distant wild uplands of Fauldhouse moor, became referred to as the “North Pole”.

Eastfield brickworks, as shown on the 1896 25" OS map, and their ghostly shadow seen from the air.

The most prominent landscape feature from this viewpoint is the curving route of the mineral railway which once served Eastfield brickworks and the freestone quarry that lay beyond. In aerial photographs the outline of the two Hoffman brick kilns, with their distinctive rounded ends, can be clearly seen, although at ground level the banks and hollows are far less obvious. It appears that these substantial works were begun during the 1880's by William Turner and Sons, subsequently Turner Limited. Presumably the clay and blaze used for brick production were removed as overburden in order to reach the Kiltongue sandstone that was worked for building stone. Turner Limited went into liquidation in 1909, and both brickworks and quarry at Eastfield appear to have been abandoned at about that time.

In about 1950, the derelict quarry was acquired by West Lothian County Council as a coup for domestic rubbish, and during the 1970's, under private ownership, the old workings received substantial volumes of liquid industrial wastes. Licensed dumping was discontinued in 1979, and following a full site investigation that concluded toxic materials were effectively contained, the entire area was filled in and levelled, and is now covered by a small forest of mature conifers. 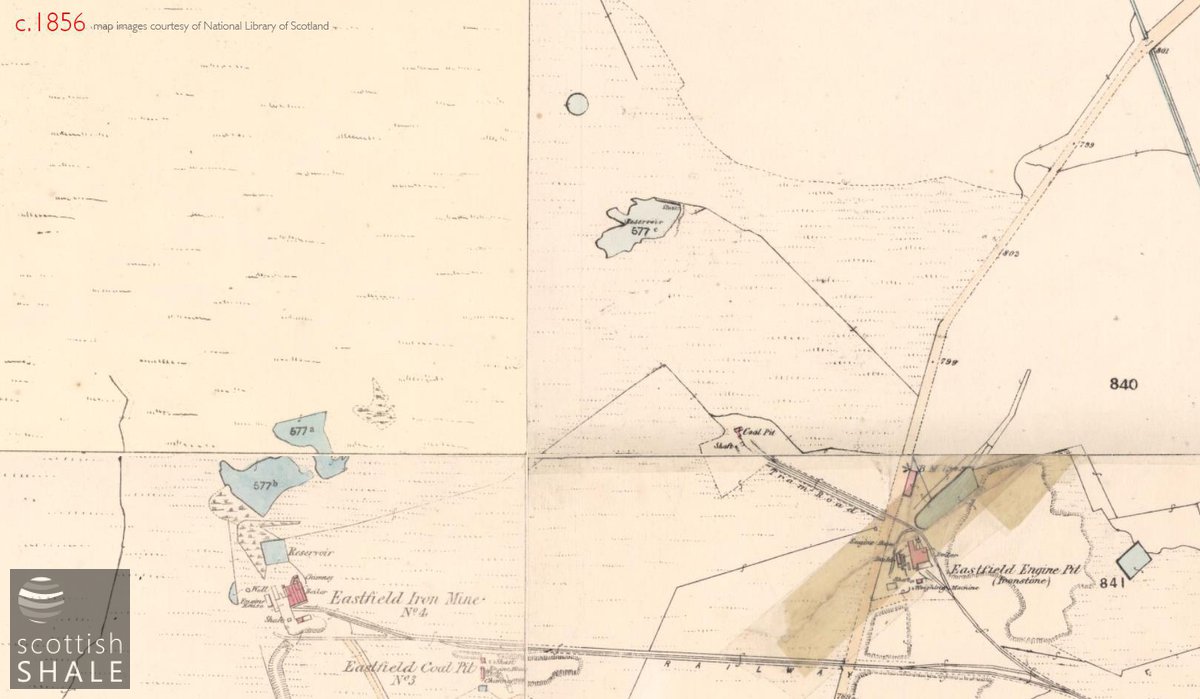 he area in the 1850's, with railways and tramways linking the Eastfield coal and ironstone pits. The road is now the B7010 linking Fauldhouse and Longridge. 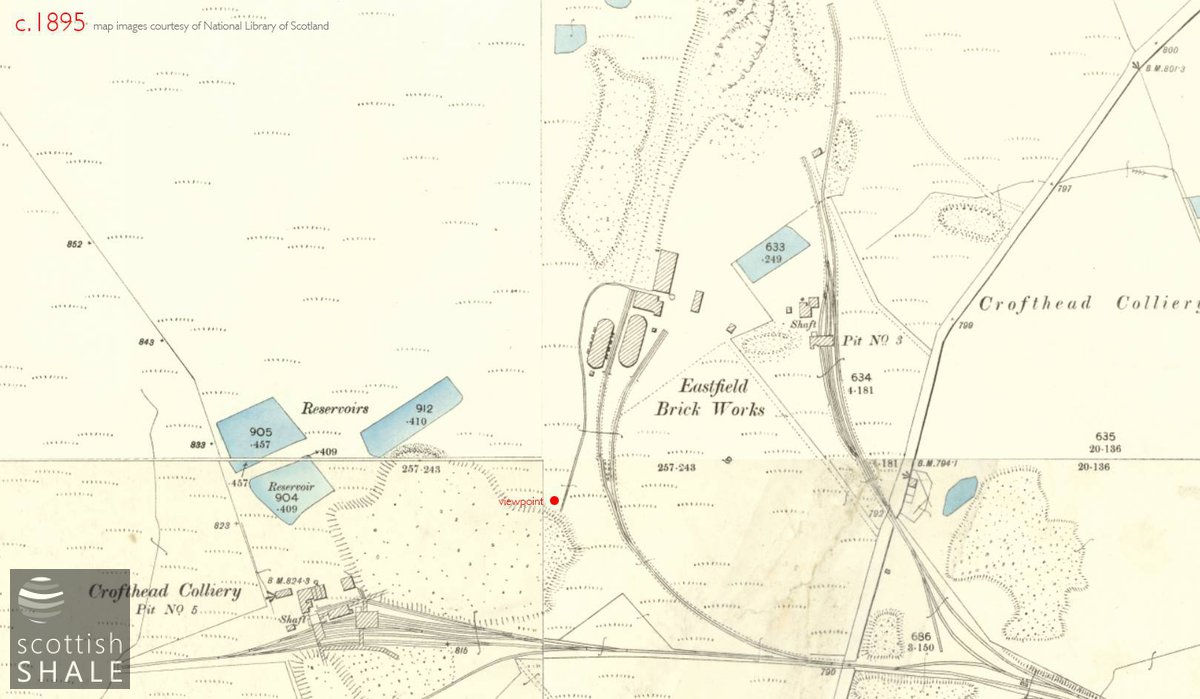 The scene in 1895 with the brickworks, and Crofthead No.3 and No.5 pits in production. 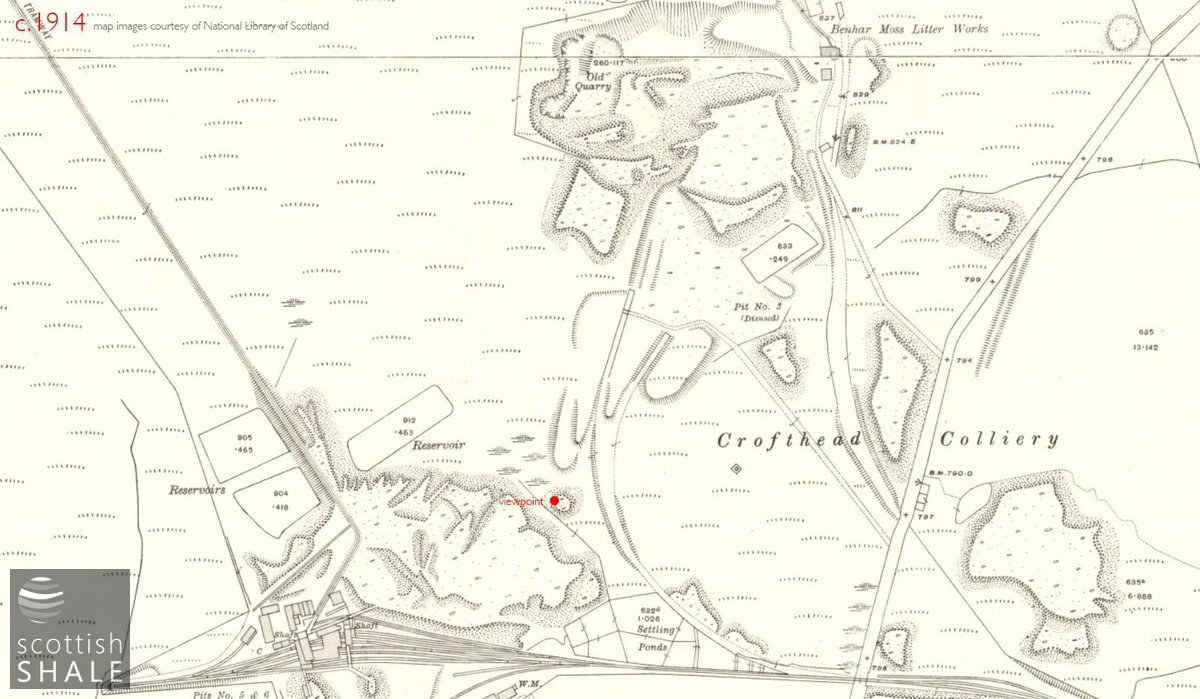 By 1914, the brickworks had been demolished and the quarry unworked. A long straight tramway had been built linking Crofthead No.7 (the North Pole) with No. 5 & 6, the Victoria pit.

A tramway extended from the Benhar Moss Litter Works, opened c.1910 to peat workings on the moor. 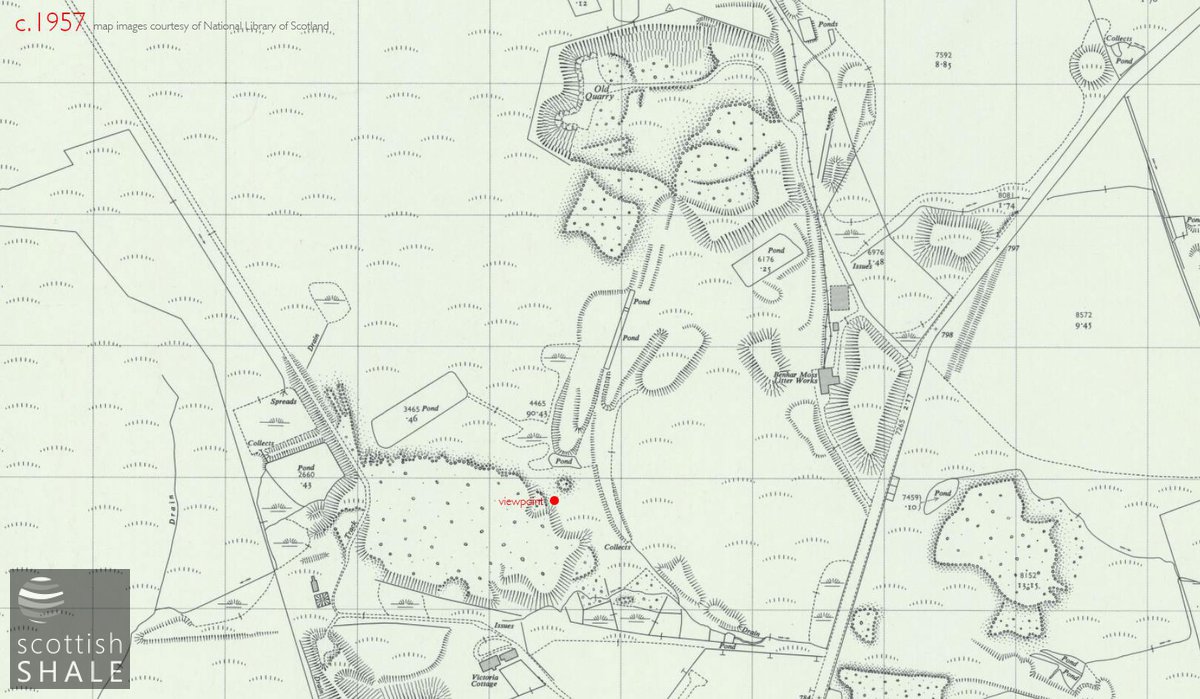 The Moss Litter works seem to still been in operation when this map was surveyed in 1957. 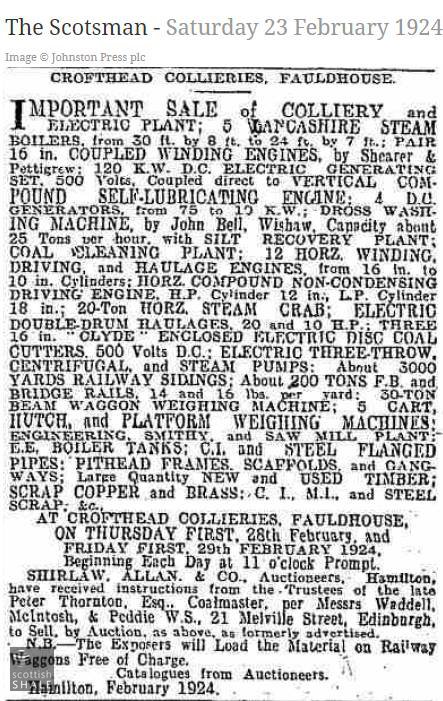 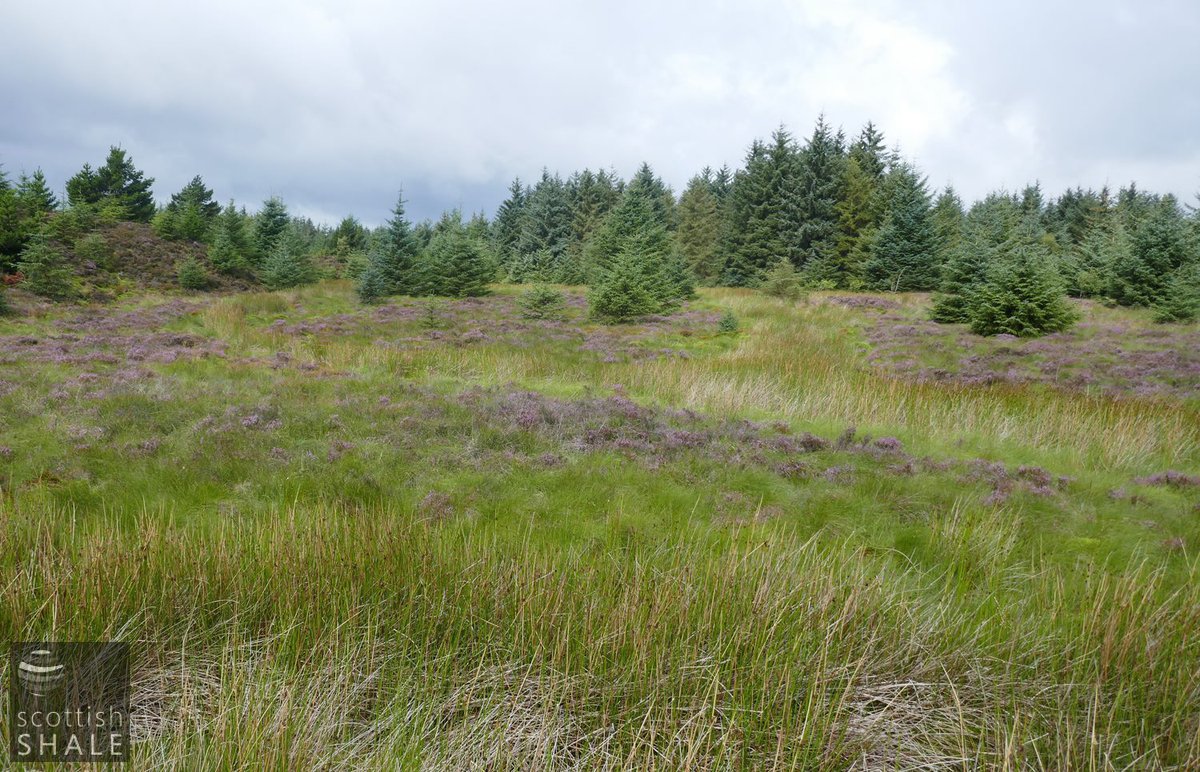 The brickworks site seen from the ground. The reed-filled paths mark the routes of railway sidings, while the heather-clad mound between them is the site of one of the brick kilns. 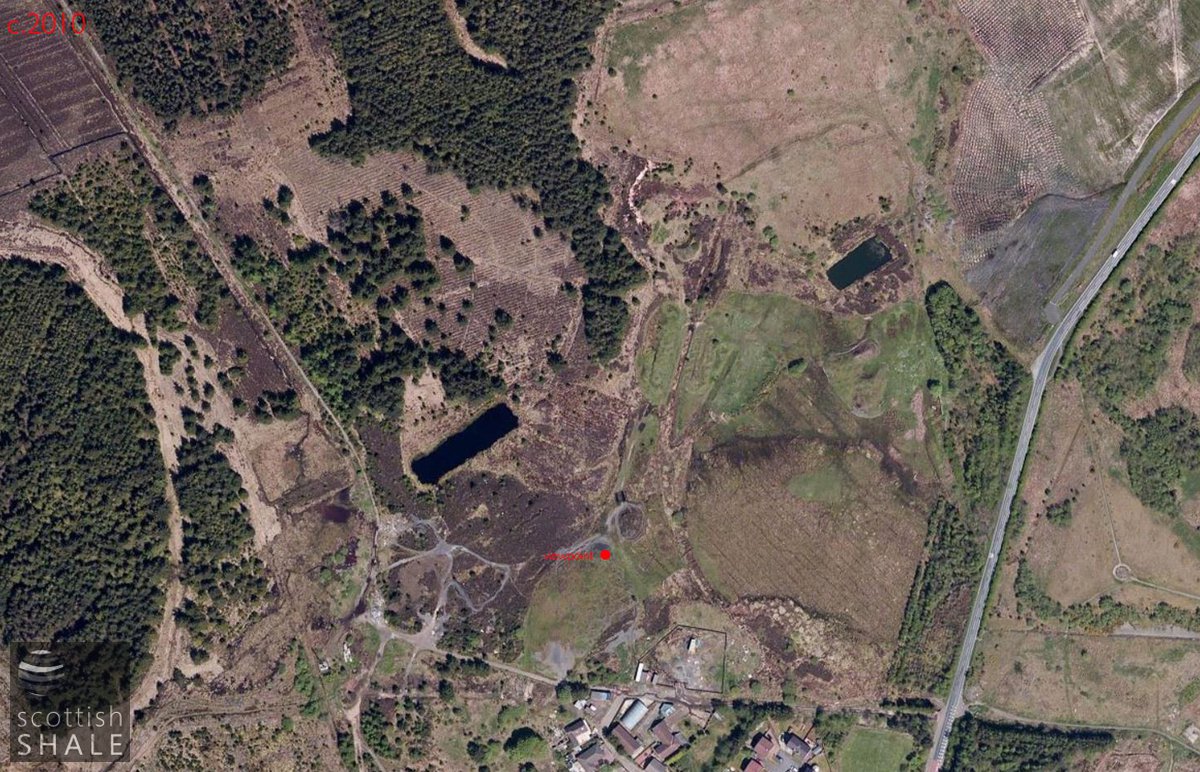 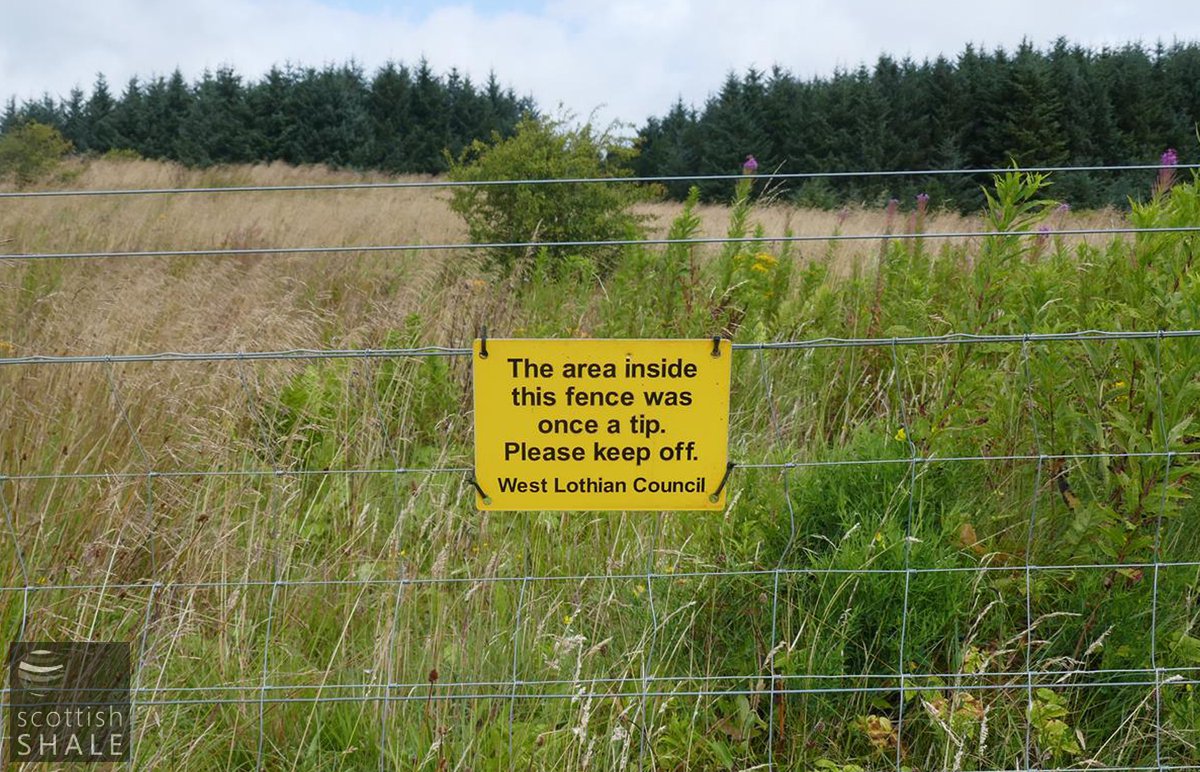