The Final Years of the Broxburn Candle-House 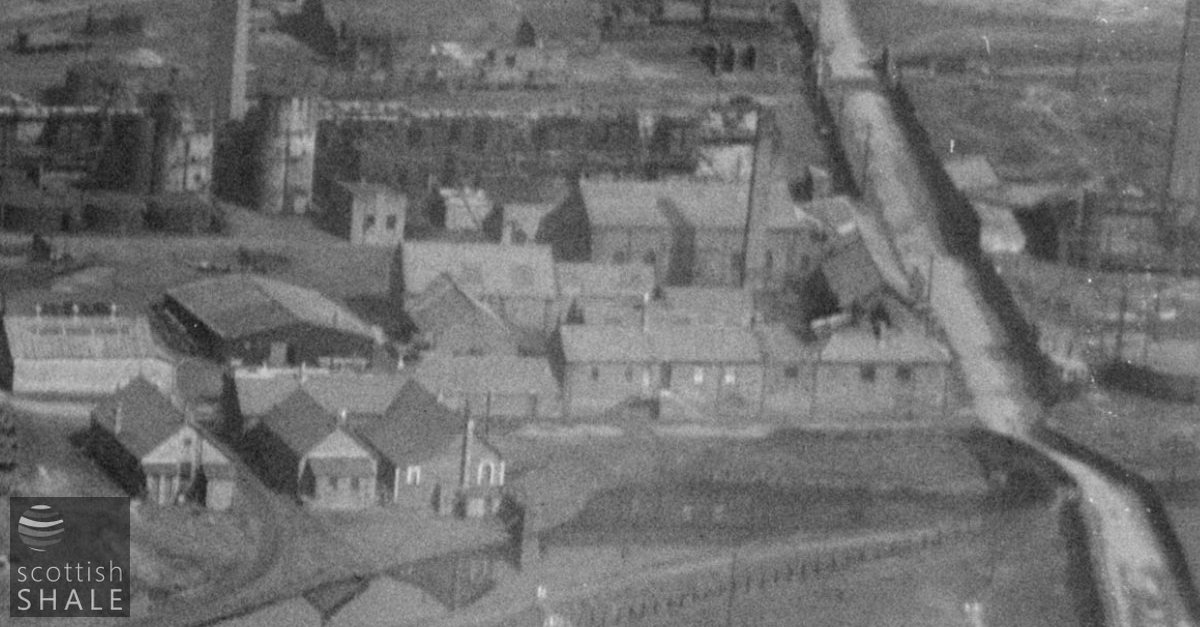 A blurry aerial view from 1927. The office building now known as the "candleworks" is seen beside the canal basin. (Britain from above SPW017721). 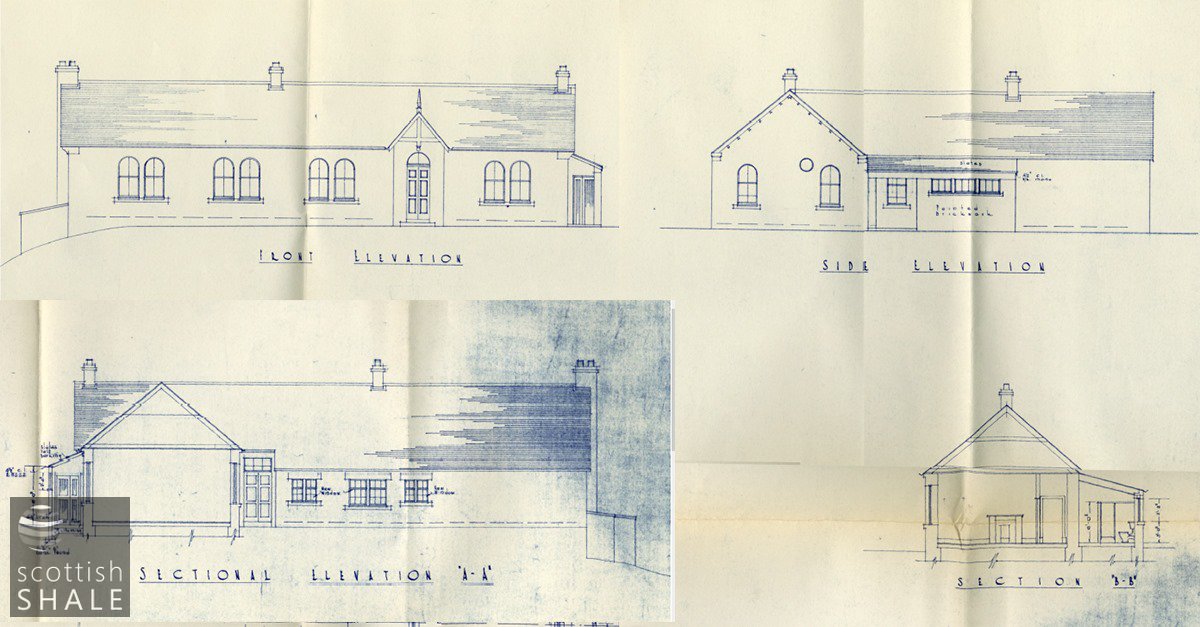 During Victorian times, the candles, night-lights and other wax products manufactured by the Broxburn Oil Company became famous throughout the empire. Following the outbreak of the first world war, candle production was ramped up to supply military needs, and provide a little comfort to the troops in the trenches. After receiving candles in his Christmas gift box, one Tommy wrote “I have just opened the packet of Broxburn Candles and five more men beside myself are writing with the aid of that light..... I can assure you that I will always keep a warm place in my heart for Broxburn”. To meet new demand, the first women were employed at the Broxburn refinery to pour hot wax into the frames of the candle-making machines and to pack the products.

The first war quickly and fundamentally changed the oil industry, with the old private shale oil companies merged and effectively nationalised to form Scottish Oils Ltd. New British oil interests were rapidly developed overseas, and by the time the war had ended, crude oil imported from Persia had undercut the economics of the shale oil production. This soon led to the closure of shale oil works, mines and refineries, accompanied by redundancies and terrible hardships. 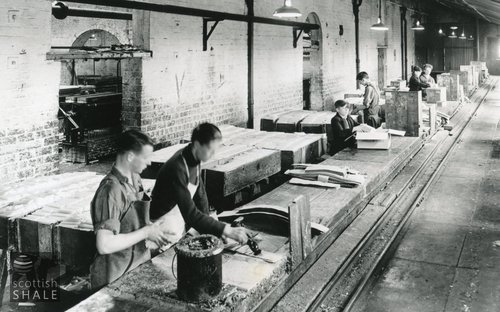 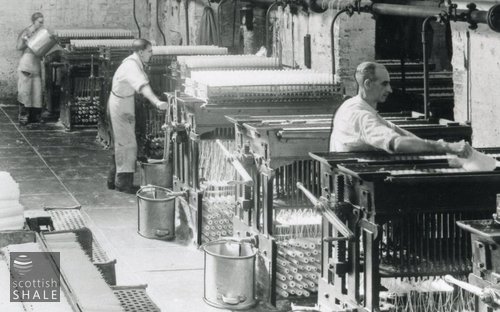 The mighty Broxburn refinery was closed in 1926, when Scottish Oils centred all refining activity at Pumpherston, however the vitriol plant, which produced the sulphuric acid used in oil refining, continued and operated until about 1960. The candle works were also retained. In the depressed days following the war there remained a good market for the basic staples of life such as the humble candle. In 1922 Scottish Oils Ltd signed agreements with Burmah Oil, Lever Brothers (owners of Price's patent candles) and others to form “Candles Ltd”; a new company to control the British candle industry. “Broxburn” brand candles were then manufactured by Candles Ltd., later retitled Prices' patent candles. Above left: Making boxes at the candleworks c.1925. Work for the boys. Above right: Men at work. Hot liquid wax was poured into the moulds of the candle frame, taps were opened to allow water to flow around the outside of the metal moulds and cool them. Once the candles were cold and solid the handle on the end of the frame was turned lifting the candles out of the molds and into the wooden transfer rack placed above them. 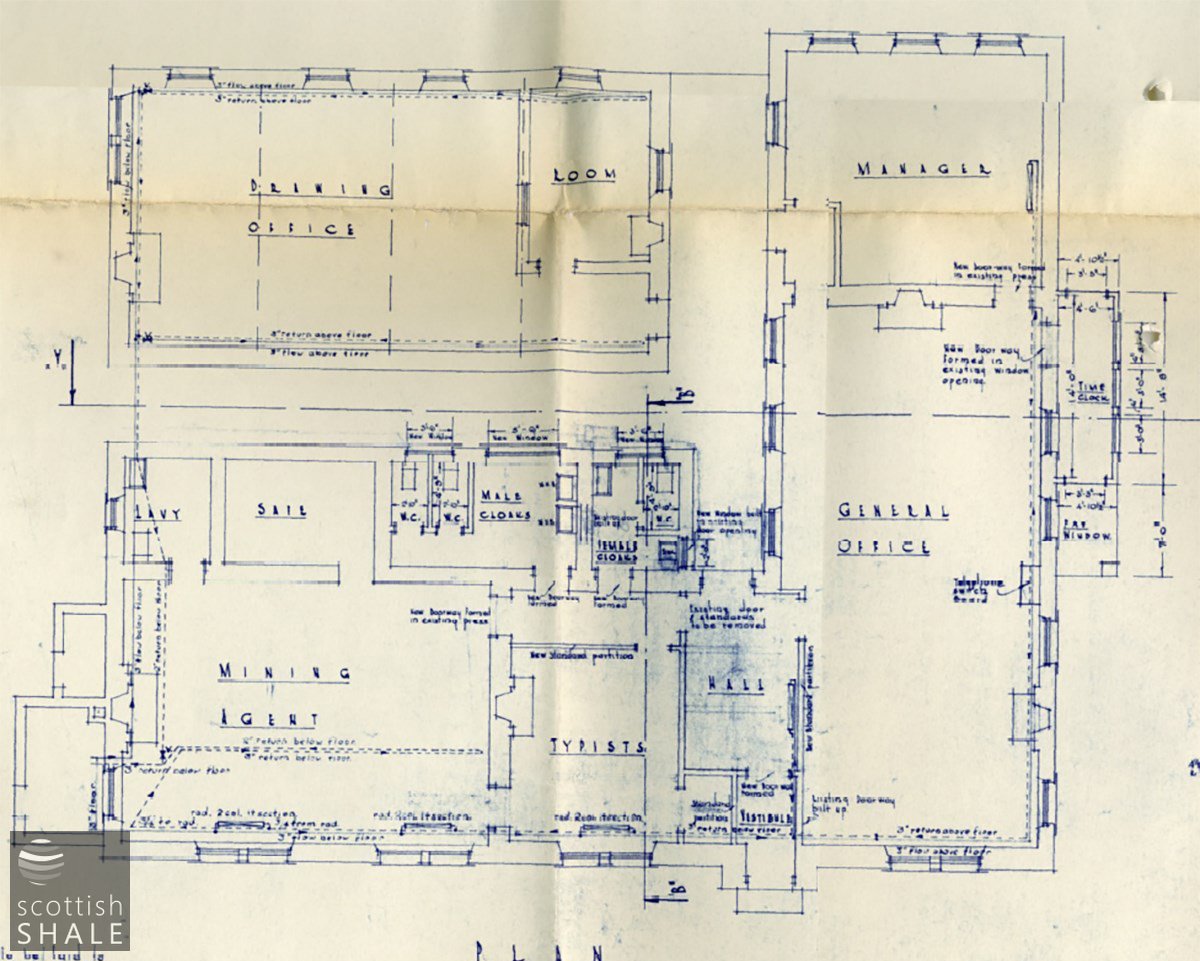 1951 plan showing the layout of the office ("candleworks") building. 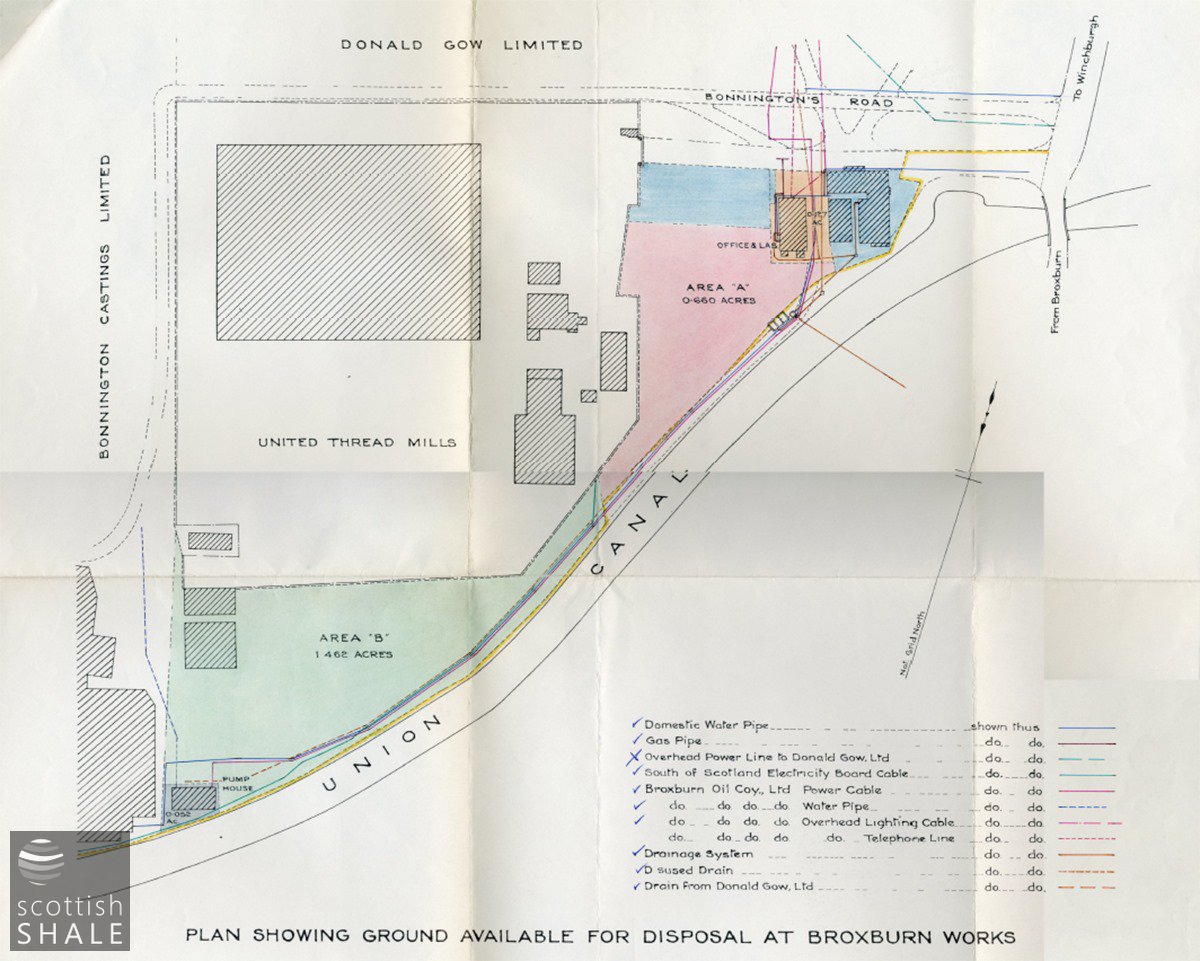 During the tough times of the early 1930's, while the rest of the Broxburn refinery gradually fell into dereliction, a substantial number of men and boys remained at work making candles and in associated box-making and packaging tasks. While Pumpherston refinery continued to produce wax as a by-product of shale oil production, the introduction of new refining processes meant that this product was not well suited to candle-making, and had to be blended with a large proportion of American or Far Eastern waxes to make Broxburn candles.

World war two brought further dislocation of life in which candles provided a reliable light in emergency conditions. Production at Broxburn was significantly increased following the bombing of the London factory of Prices' patent candles. Power-cuts and fuel shortages ensured a continued demand for candles and night-lights in the immediate post-war period, however as life returned to normal, the scale of operations was reduced. It was reported that following major cut-backs the “boys” (many involved in packing candles were teenagers) found work with Scottish Oils at Grangemouth, while the “girls” found work at United Thread Mills, which had opened in 1949 on part of the old refinery site. By 1950 it was report that a only a skeleton team of a foreman and two assistants remained to maintain the plant, however there candle works seems to have enjoyed a minor resurgence, as it was stated that “less than a dozen men” were working there when the candle-house finally closed in 1956.

Close to where the Greendykes road crosses the Union Canal, there survives a sad-looking and much modified building which is locally known as the “candle works”. This last surviving building from the Broxburn refinery is shown on the 1896 map, but seems always to have served as an office, rather than as a candle factory – the main candle-house was located in much larger sheds further to the west. It might have been used at some time in the administration of candle works, but our 1951 plan shows it as a general office, offices for a manager and a mining agent, and a drawing office.

In May 1961, Scottish Oils wrote to S.G. Baker (Leith), bag and sack merchants, who were already operating from the industrial estate based on the old refinery site...... “the company (is) considering withdrawing their office staff from the small building at Broxburn and this (is) likely to become available for sale with entry after the end of June”. The old building has seem many uses since then, most recently a furniture shop and a pet store. Let's hope it continues to provide a link to Broxburn's age of oil for many years to come. 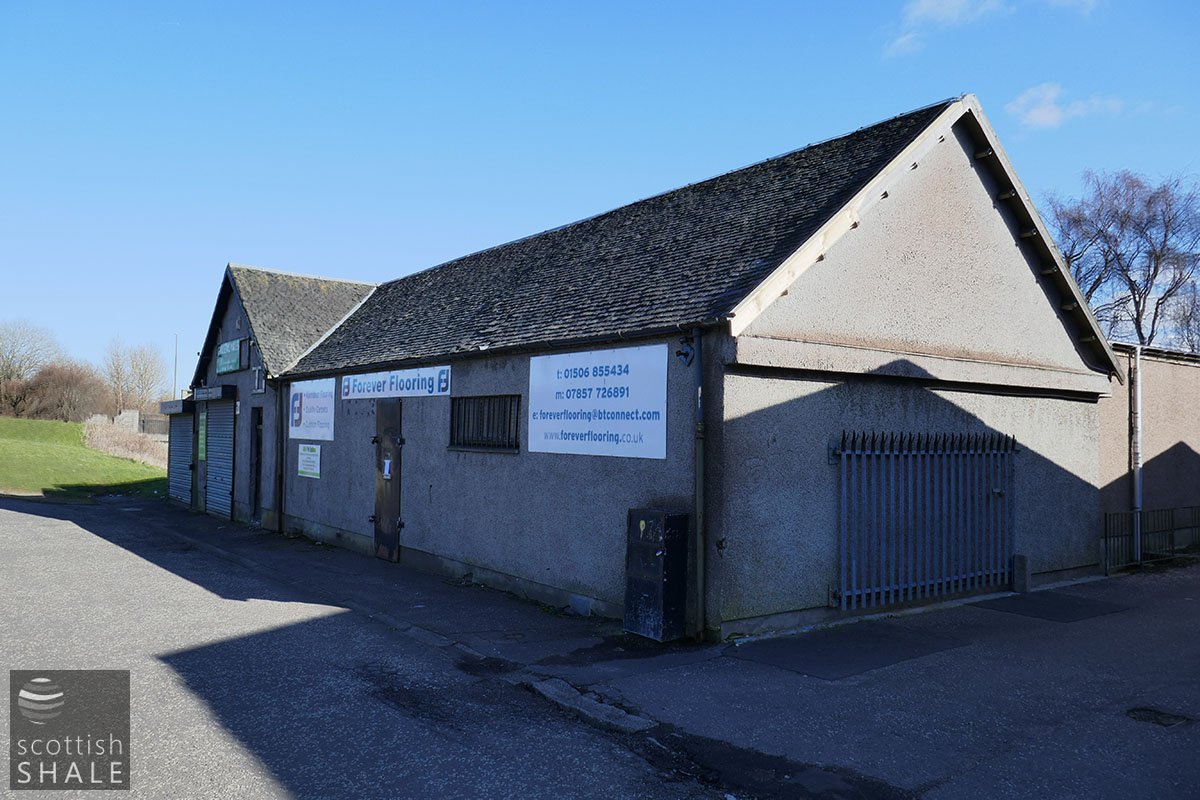 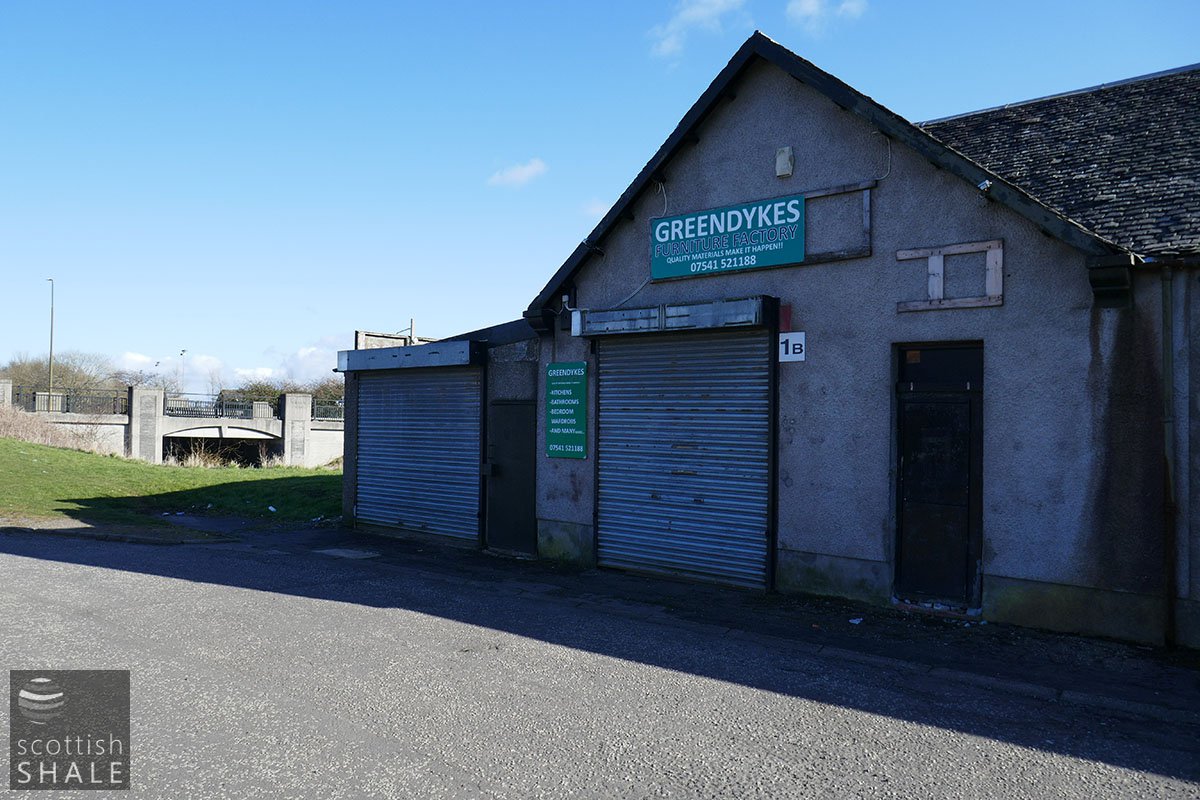 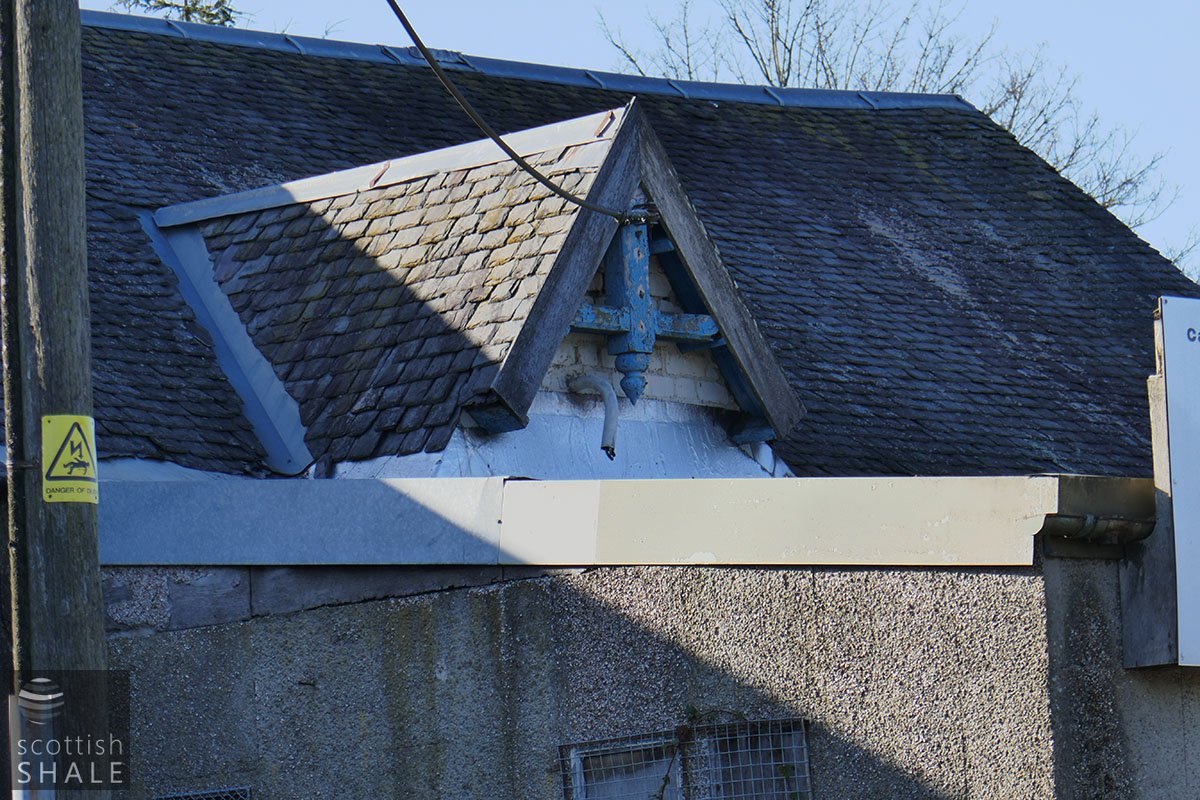 The office / "candleworks" taken 20th March 2020
Close-up of decoration above the original entrance to the building. 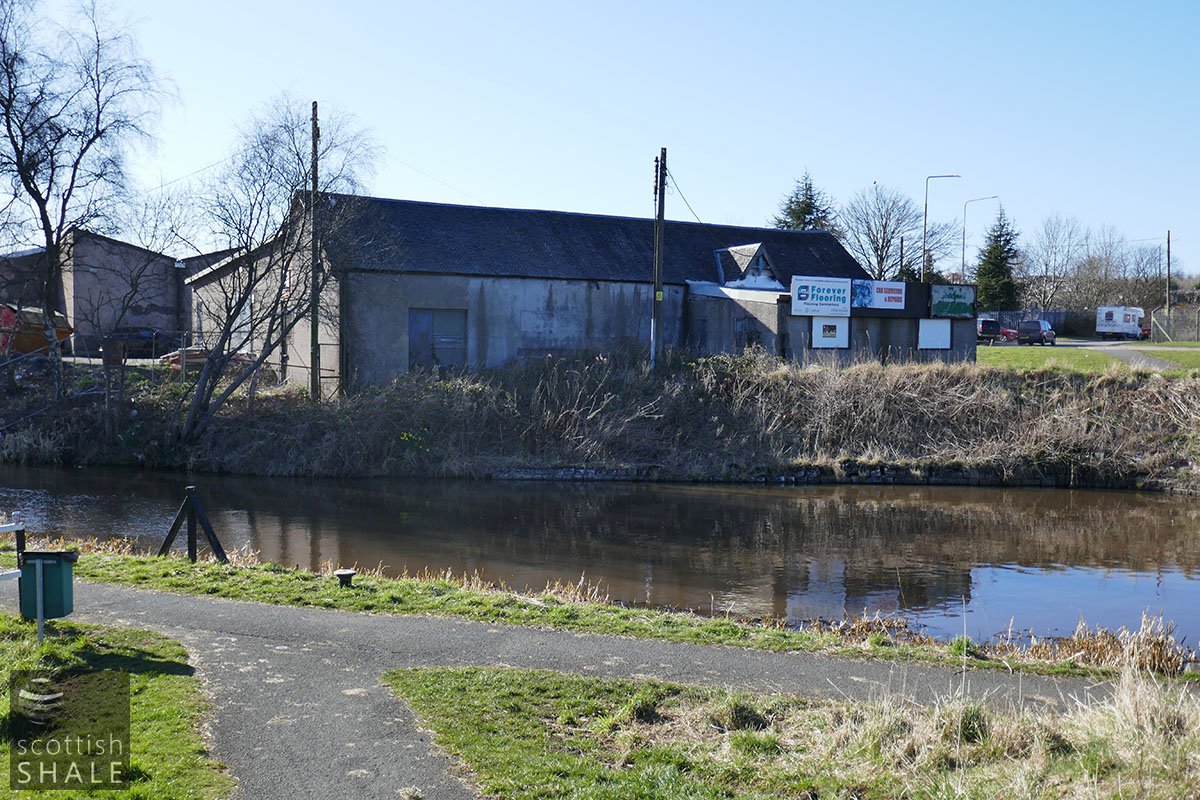 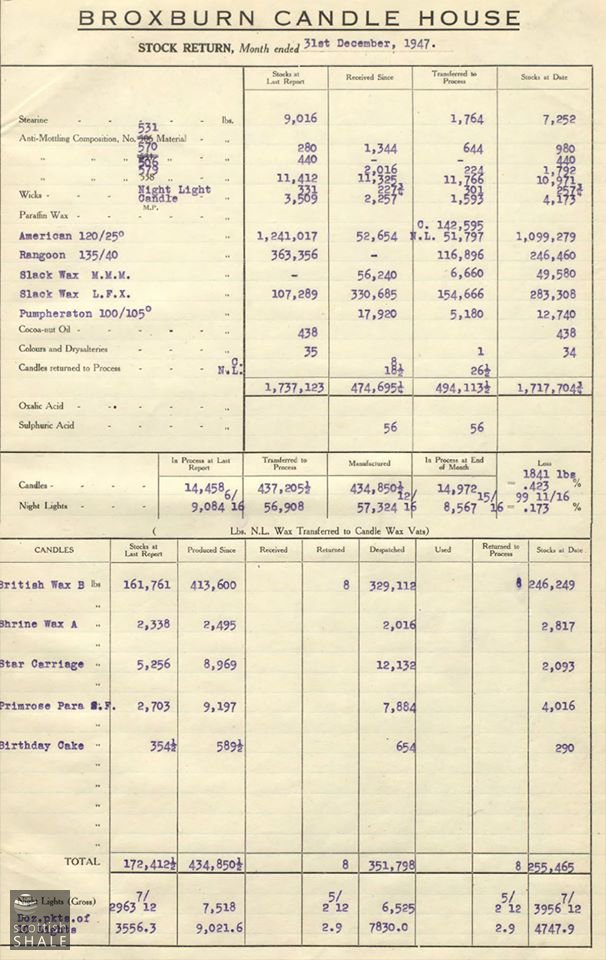 Some statistics from 1947, highlighting how little Pumpherston wax from shale oil was included in the products. Stocks of birthday cake candles seem to be running low.