In search of the Burngrange oil works

“The Scottish Oil Co. Ltd” was the grand title chosen by a modest enterprise that briefly operated a shale oil works at Burngrange, near Blackbrae bridge on the West Calder to Breich road. The company was one of many that sprung up during the shale oil boom of the mid 1860's only to collapse when the price of imported American oils plummeted.

The rights to mine shale at Burngrange were first advertised in January 1866, and acquired by Edinburgh tobacco manufacturer, Henry Christie, who in April of that year established the Scottish Oil Company and hurriedly set about construction of an oil works equipped with 30 retorts. A row of six cottages were constructed to house the company's miners and oil workers. Things did not go well for the company, and it was said the ten thousand pounds were spent on a concern that produced only ten thousand gallons of crude oil. The plant and buildings at Burngrange were sold in April 1868, and the company was wound up the following June. 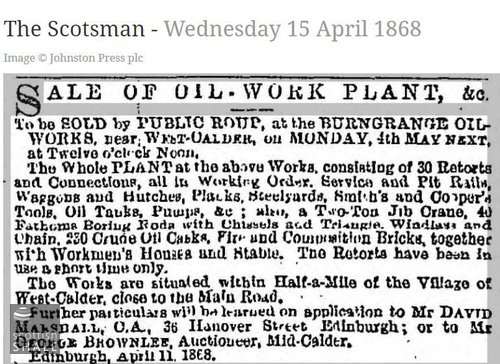 It seems that the mineral rights were then acquired by Youngs' Paraffin Light and Mineral Oil Company who sunk Baads No.9 (or Blackbraes) pit on the land, to reach the seam of Fells shale. This pit seemed to have had a short working life and it might be imagined that geological conditions limited the extent of the shale workings.

The precise location of the oil works is unclear, with no surviving plans of the works, and no evidence of spent shale bings or ruins marked on the 1894 Ordnance Survey map. The OS map does however show “old quarries” either side of the West Calder burn. It seems likely that the shale seam was first discovered were it outcropped on the bed of the burn, and that the Scottish Oil Company worked the shale on either side of this. Earthworks close to this, marked “old level” on the map, may represent a mine following the shale seam into the valley sides. Evidence of all of these still survive amongst the bushes and undergrowth of the glen. The “old shaft” shown on the map marks the spot of Young's Baads No.9 pit. The associated bings of mine waste that are still clearly evidence, although they have been extensively quarried by the farmer in recent years.

While the oil works came and went within a period of two years, the cottages built to serve them continued to provide sturdy homes until demolition in the late 1930's. Their site is now occupied by the works of A.J. Hornig Ltd. home of the famous West Lothian sweet chilli haggis.

Above right: The end of the oilworks. 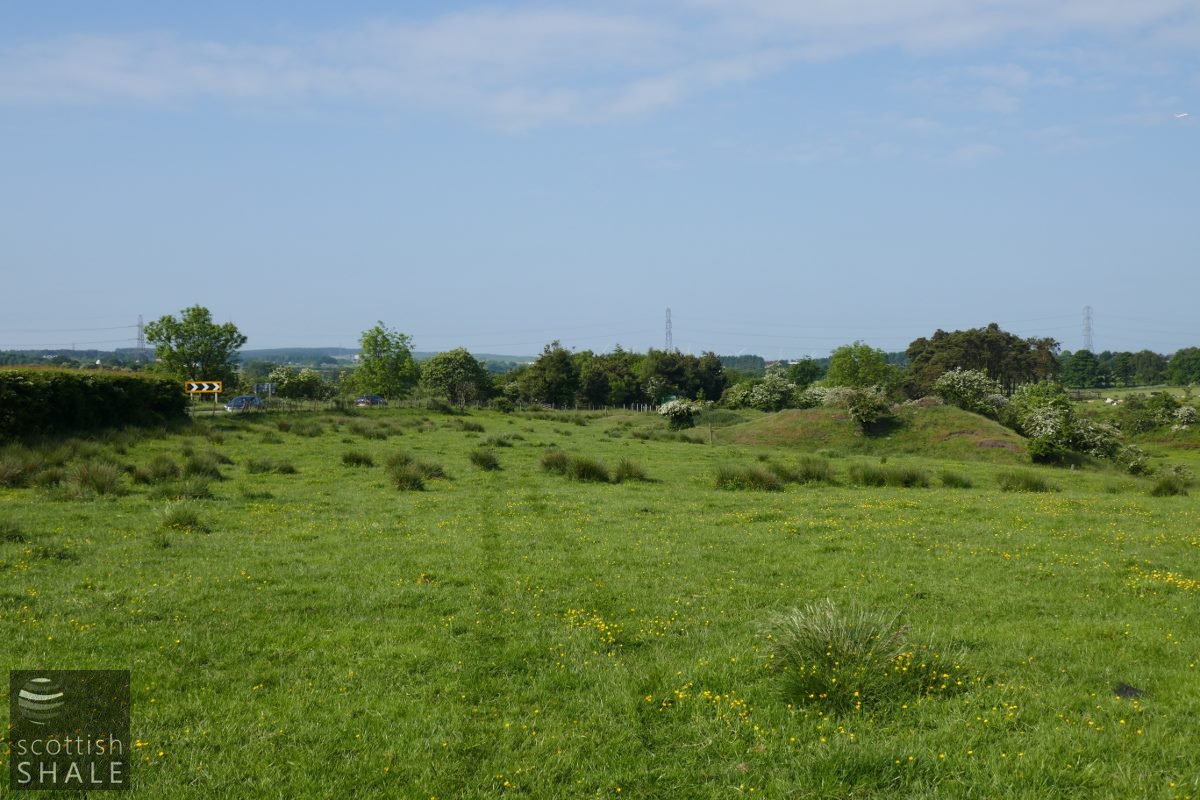 Probable site of the oilworks, looking west towards site of Baads No.9 pit. 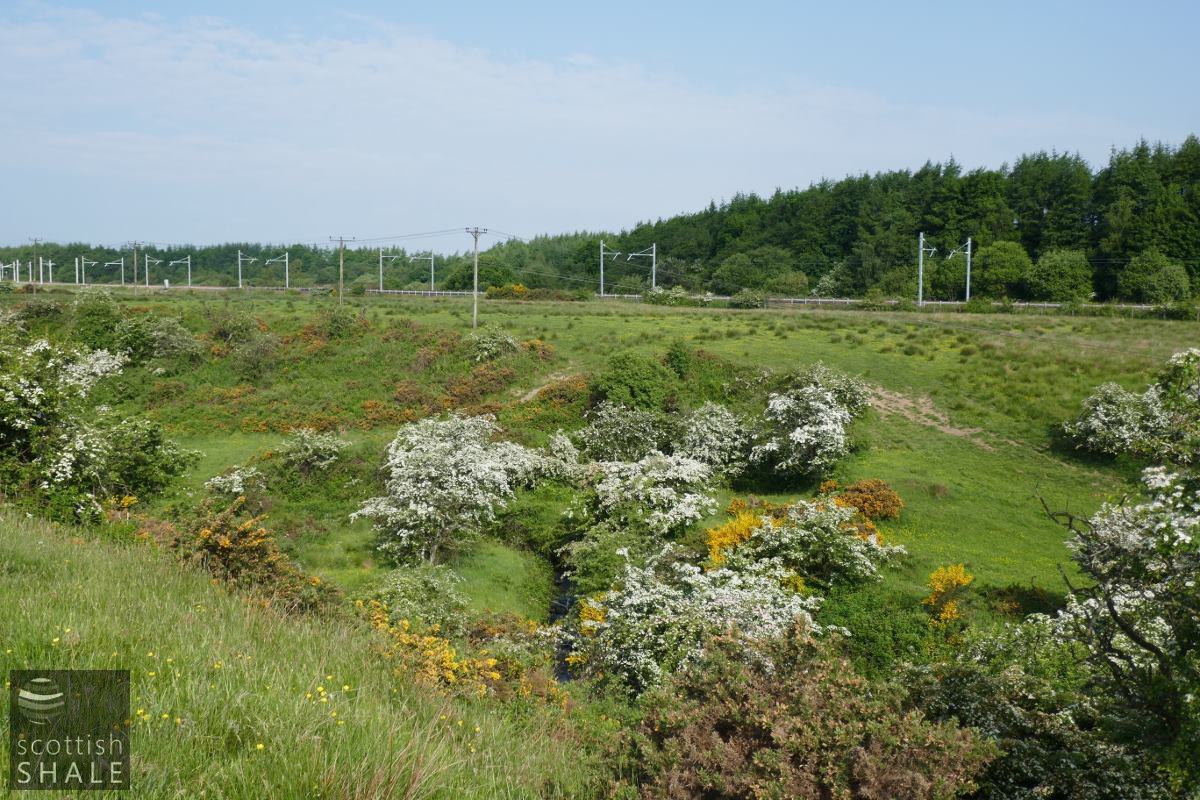 Glen of the West Calder Water, with evidence of shale quarrying. 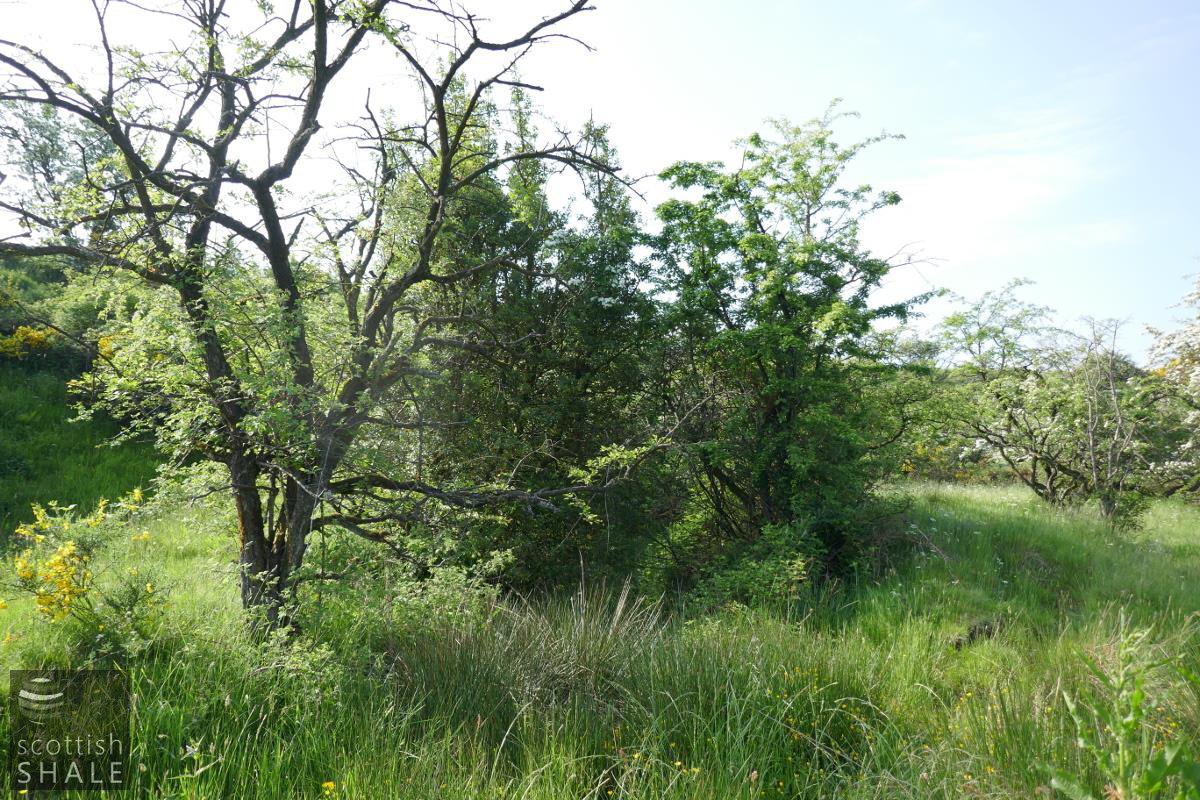 In the glen. The bushes in the centre, mark the start of the feature marked "old Level". 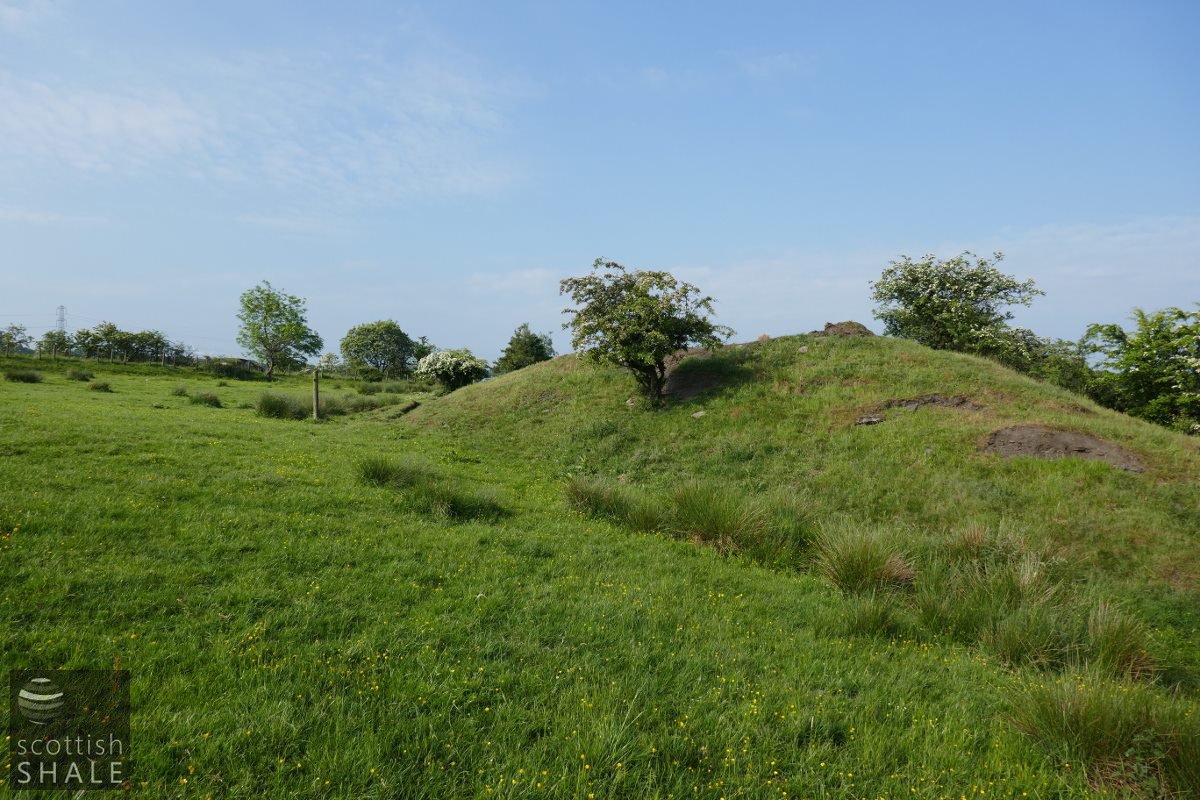 Waste bing of Baads No.9 pit. 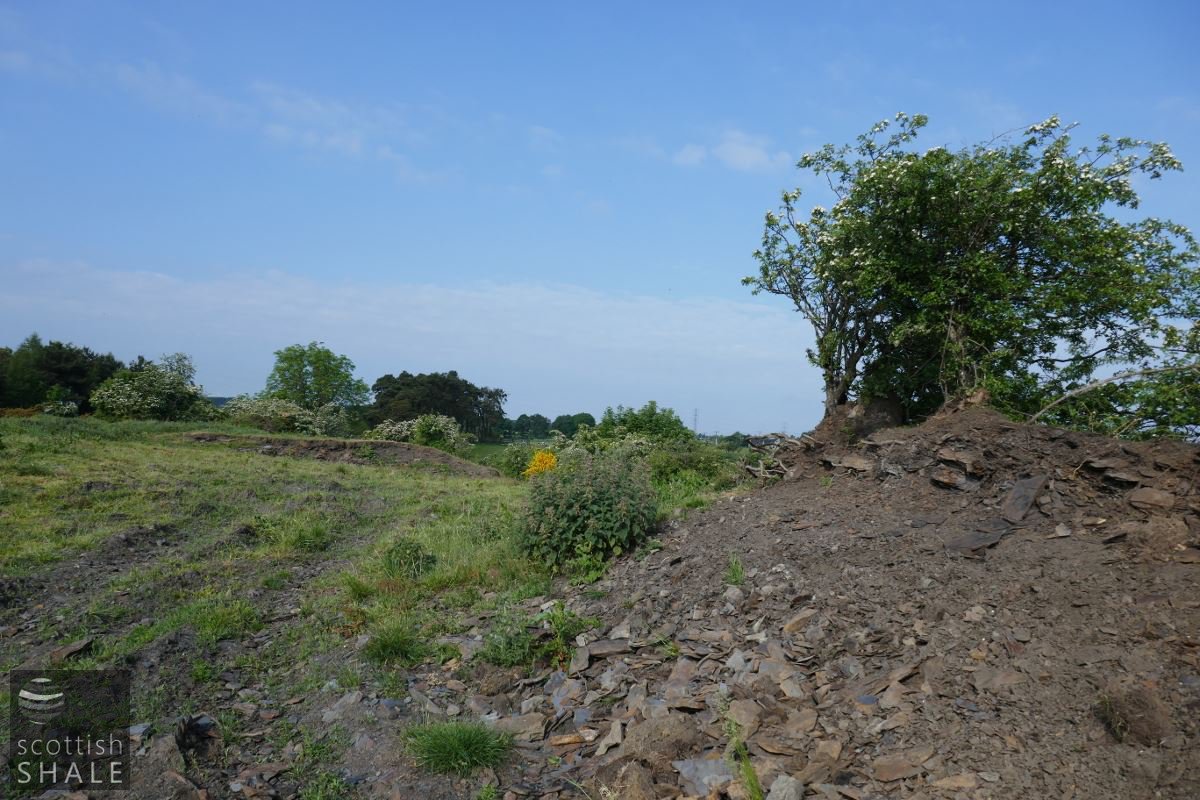 Baads No.9 bing, being quarried. 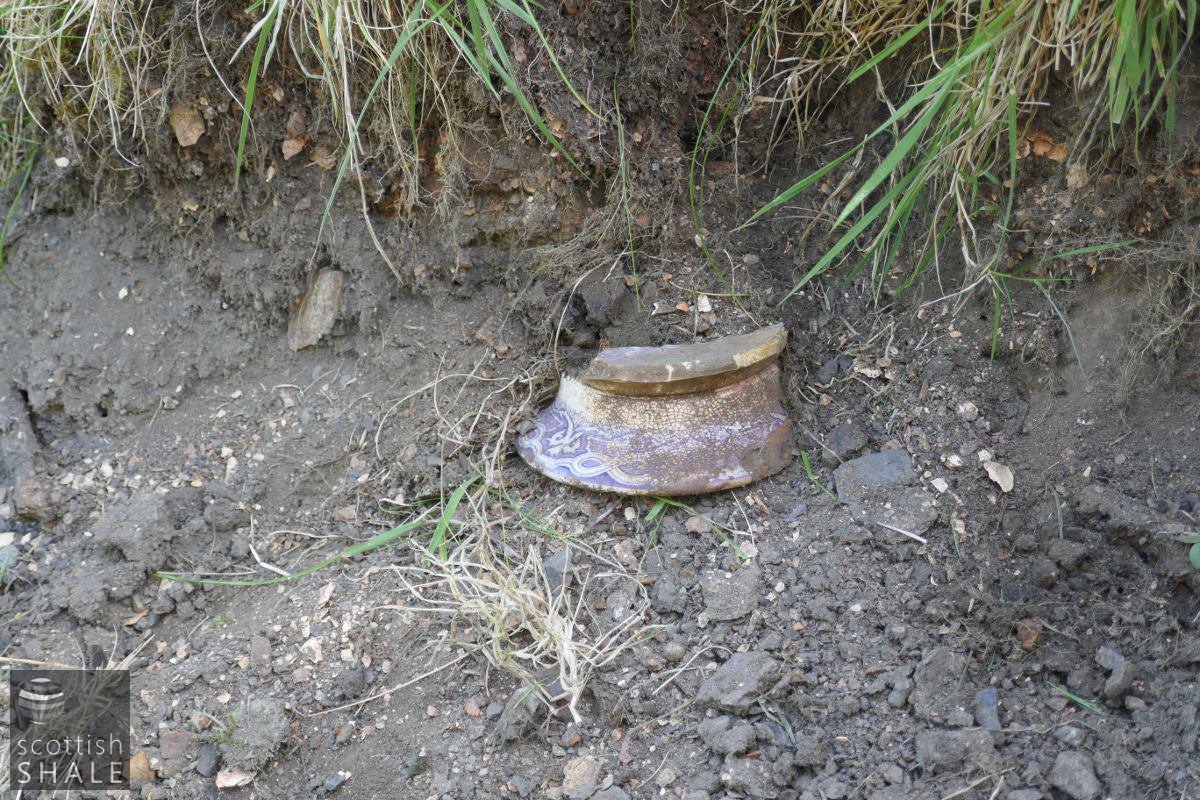 Not evidence of a lost oilworks, just a sign that household waste was once tipped conveniently over the edge of the glen. 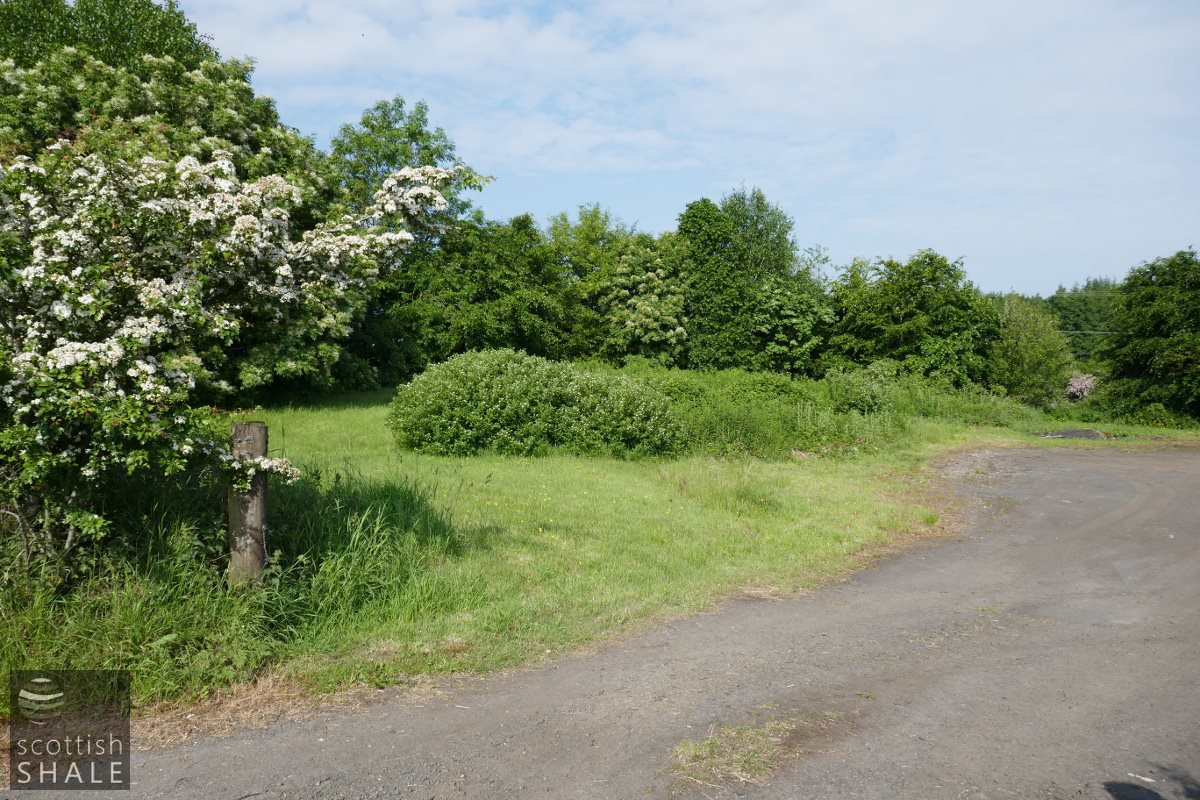 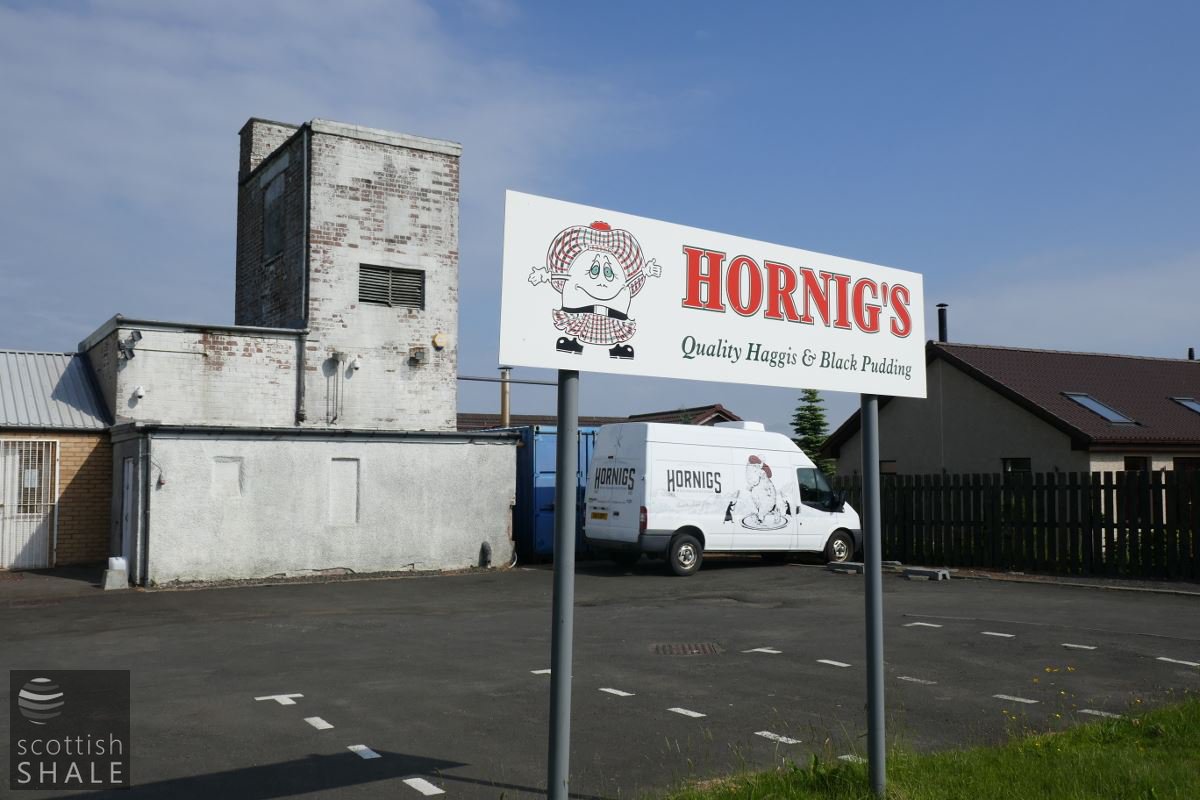 Can I have extra broon sauce please?