The story of the Whitburn inn.

Before the construction of turnpike roads, the journey between Glasgow and Edinburgh might occupy several days along rough tracks that were best tackled on foot or on horseback. During the 1750’s, the first great toll road between the two cities was completed by way of Holytown, Bellshill, Shotts, Whitburn, Livingston and Midcalder. The opening of this highway allowed travellers to board a coach at 6am in Glasgow, and arrive in the capital just nine hours later following various stops for refreshment and change of horses. The fastest service, which carried the Royal Mail, completed the journey in little over four hours, pausing only once for fresh horses at Whitburn.

Whitburn lay half way along the great road, at a point where it crossed the drove road heading south towards Carnwath, along which cattle were herded during the summer months to the markets of England. There was probably an inn at this strategic crossroads many years before the new road, and it is certainly clear that by 1764 the Whitburn Inn was fully equipped to serve the needs of travellers; the proprietrix, Mrs Robertson, offering the hire of “two genteel close four-wheeled chaises, with fresh and able horses and careful drivers”. 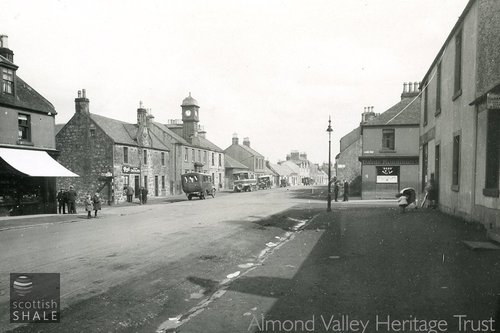 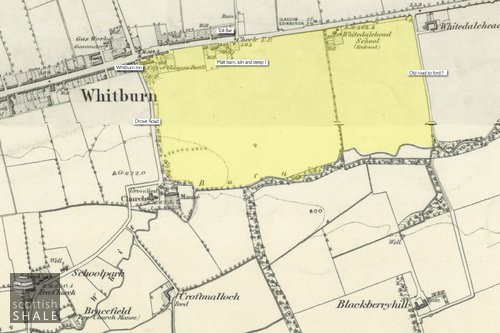 By 1800, the Whitburn Inn offered stabling for 40 horses, and controlled all of the land that lay to the south east of Whitburn cross, extending south as far as the White Burn and eastward to Whitedalehead. This was presumably farmed to produce fodder for horses and food for patrons, and included a malt barn, kiln, and extensive gardens. Successful trade at the inn soon led to the growth of Whitburn, described in 1820 as “populous and thriving village”.

With completion of a new road between Bathgate and Airdrie in 1798, a rival turnpike route was established between Scotland’s principal cities which claimed to be shorter and superior to the old route via Whitburn. A war of words later broke out between the rival turnpike trusts in which an eminent geographer was called on to establish that the new route was shorter – but only by the matter of a few hundred yards. Malicious rumours that the Whitburn Inn had closed were spread in order to entice passengers onto the rival coach service via Bathgate.

Worst was to come with the rise of the railways. The opening of the Edinburgh and Glasgow railway in 1842, quickly extinguished coach services in the north of Linlithgowshire. The coaching firm of Croall’s fought back by introducing two new “splendid four-house coaches” on the route via Whitburn. These were described as “superior to any railway carriage” and undercut the railway on price. It was claimed that “no form of transport can equal that of a well appointed four-horse coach”, and “the line of road selected is the shortest between the two cities and affords a rich treat to travellers from the beauty and variety of the scenery of the country.” Despite these efforts the service only survived until 1847.

Once the inter-city coaches had ceased, the Whitburn inn remained the centre of local life, serving the needs of travellers and their horses, and providing a venue for meetings and entertainment. As the village grew however, other hostelries (the Commercial and Ye Old Market) opened to serve thirsty natives and by the 1890, Whitburn’s “Old Inn” was down at heel with a declining reputation. In the licensing court it was claimed that the Old Inn was the only licensed premises in Whitburn to offer rooms, stabling and refreshment – the other pubs being “mere shops”. It was ruled however that the inn was now also little more than a drinking establishment. In 1900, it was finally agreed that the drinks licence of the Old Inn, No.4, East Main St. be transferred to new premises constructed next door at No.2 and patriotically named the “Pretoria Inn”. This was subsequently re-christened the Cross Tavern.

In 1907 the Old Whitburn Inn saw new life as the restaurant and ice-cream emporium of George Boni; a business that subsequently passed to his son-in-law F. Franchitti. The building was cleared in the late 60’s or early 70’s along with much of the central part of Whitburn, and a smart modern two storey building was built in its place, housing the Cross Cafe and the budget accommodation of the Old Coach Inn. The cafe is now empty and the building showing its age. A low stone building survives next to the cafe and linked to the Cross Tavern, which corresponds to the position of the stables marked on early maps. This has recently been repainted as part of the current sprucing up of Whitburn town centre. Perhaps this unassuming building is a relic of the early days of the Whitburn Inn and serves a tangible link with the golden age of coaching?

Above right: Whitburn Cross, c.1928, with David Morrison's Cross Tavern on the right and the site of the Whitburn Inn beyond it.

Above left: Probable area of the lands of Whitburn Inn, marked on the 1855 OS map - lands extend to 37 acres. 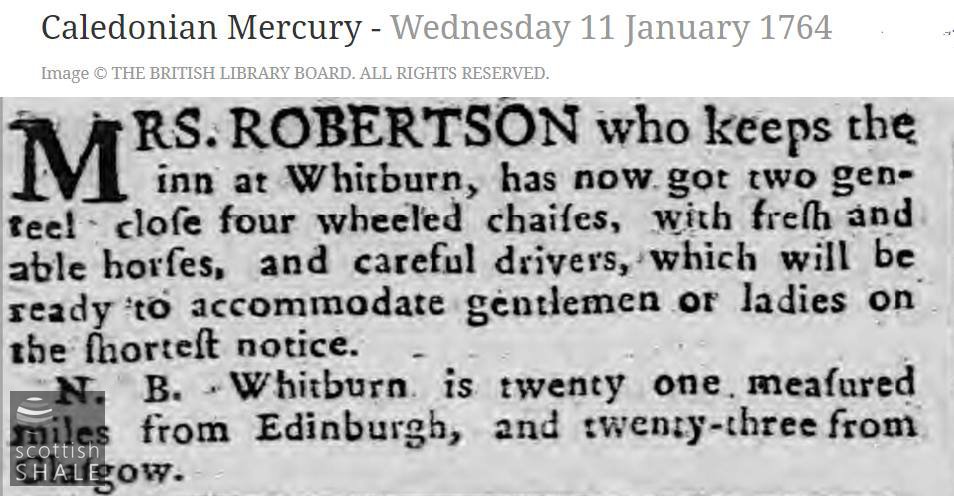 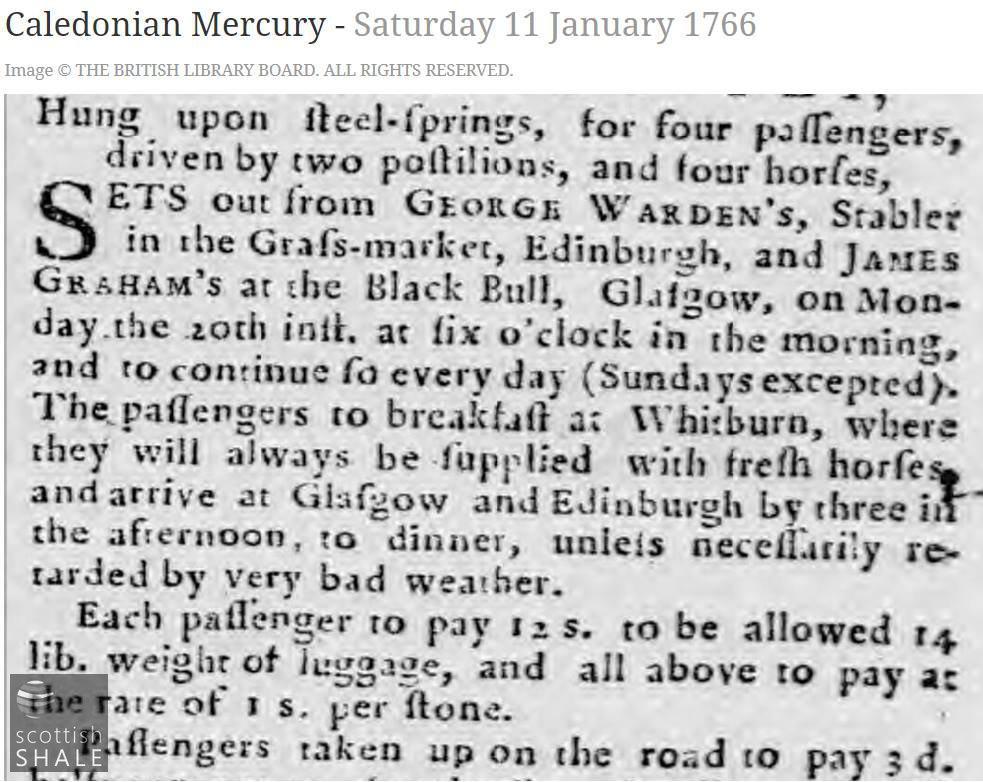 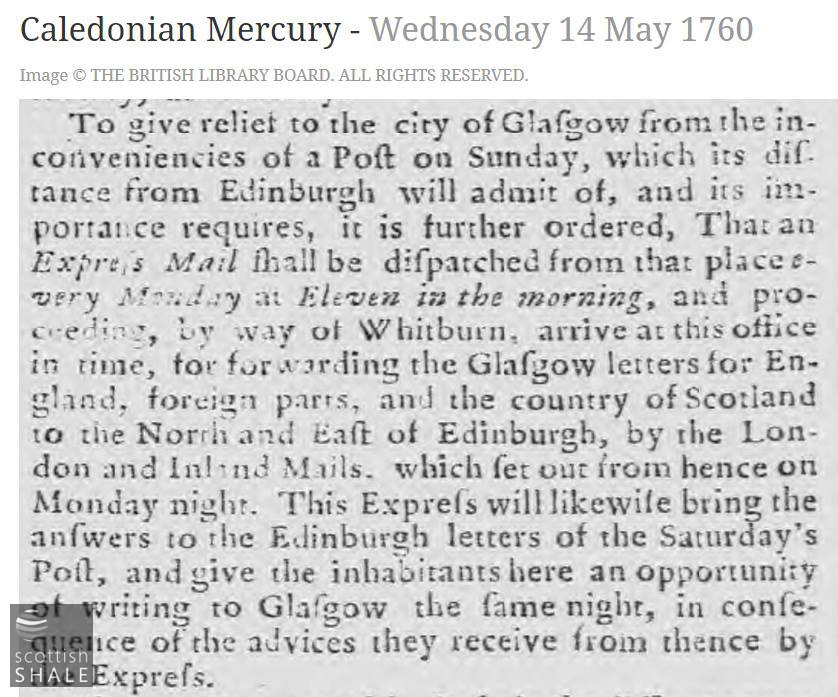 City to city via Whitburn. 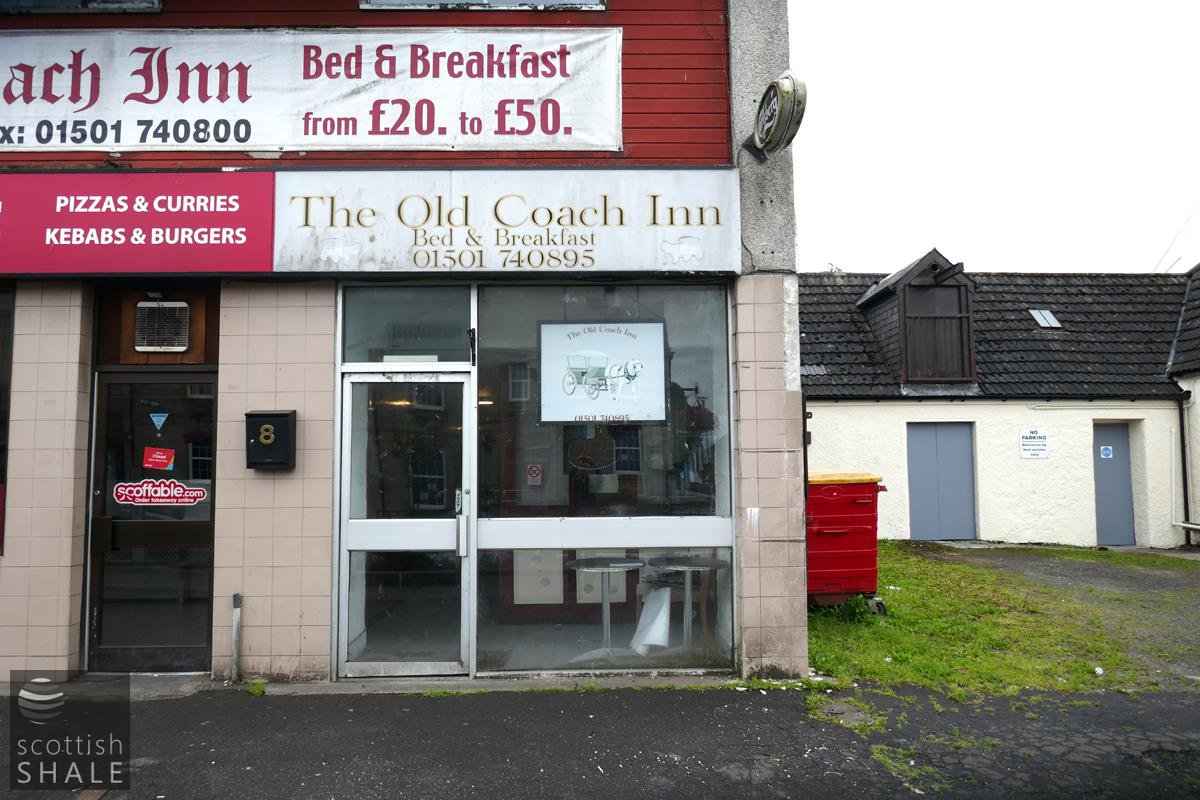 The "new" Old Coach Inn, and to the right, possibly the stables of the original Whitburn Inn. 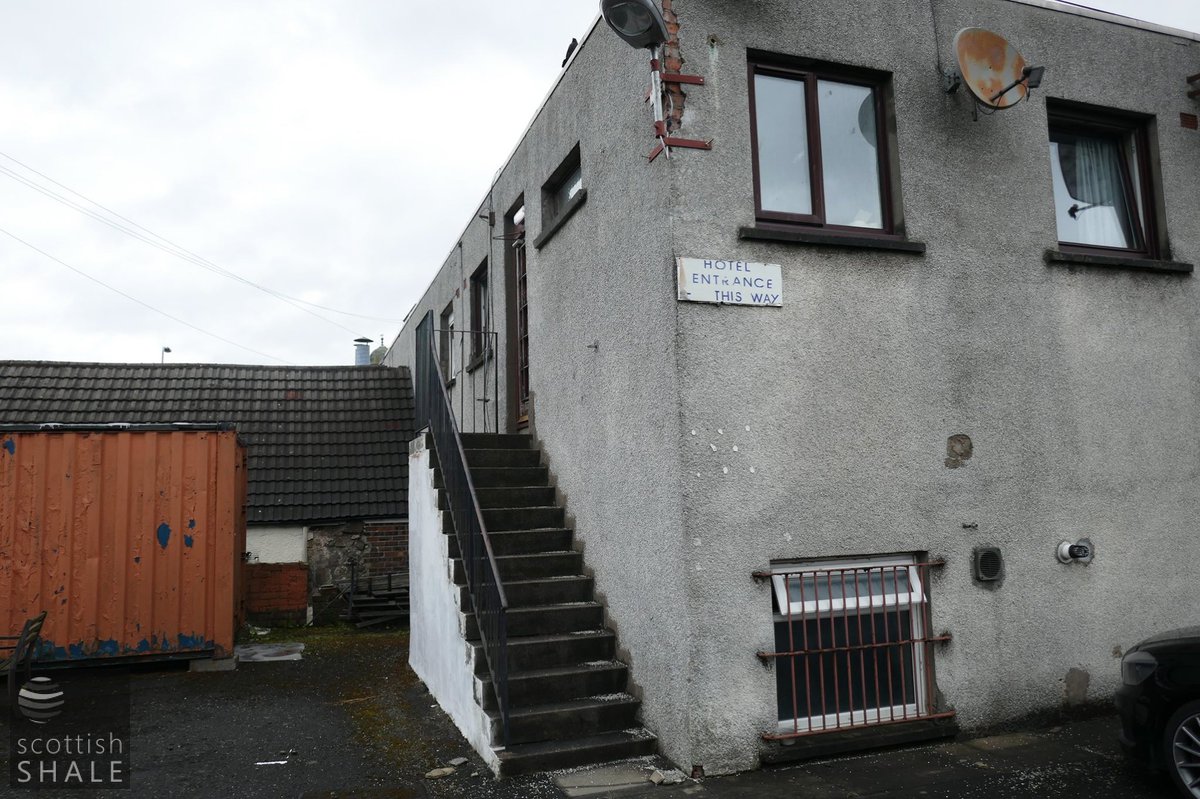 Old Coach inn from the rear, with original building on the left. 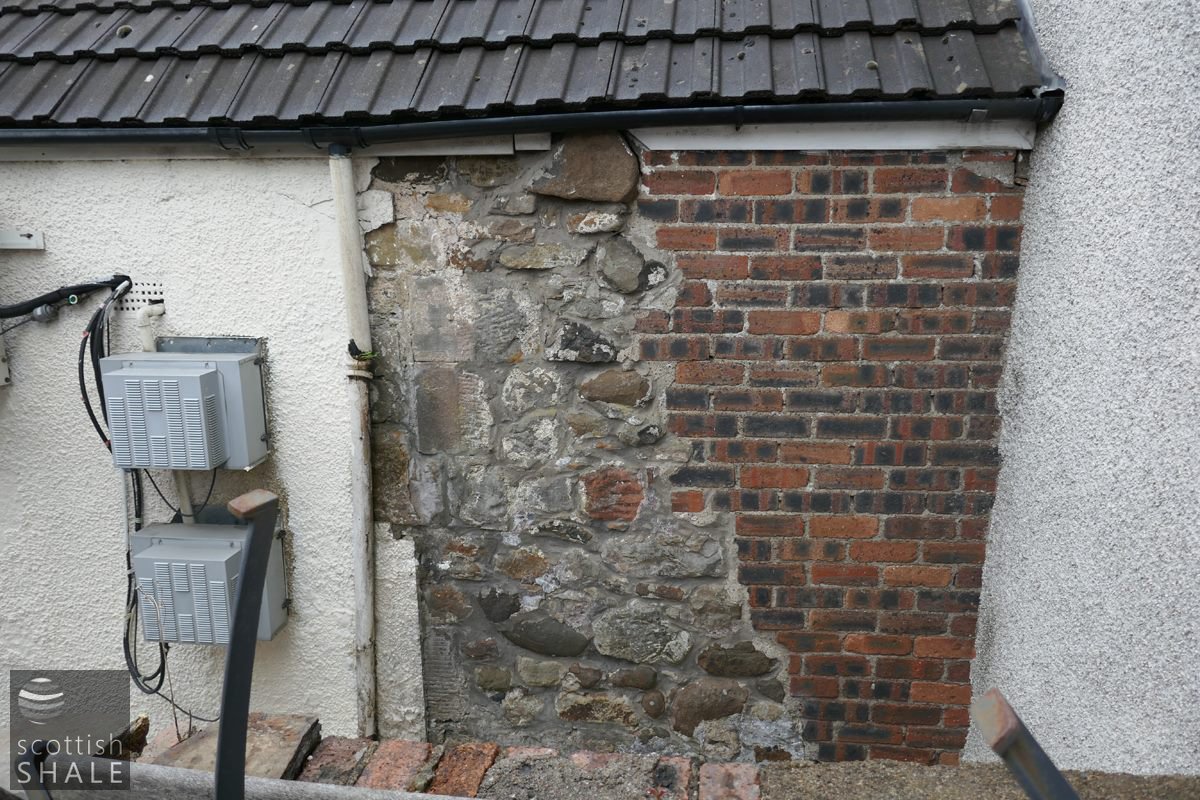 The stables of the Whitburn Inn? 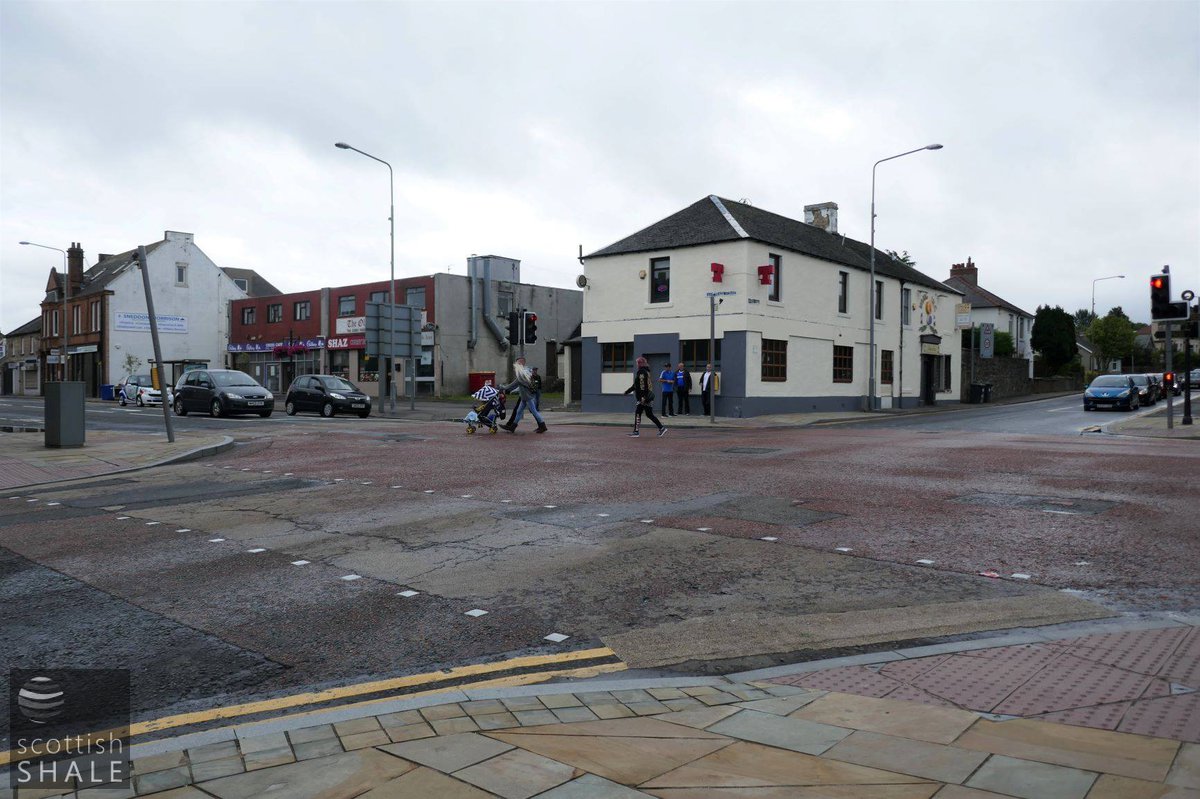 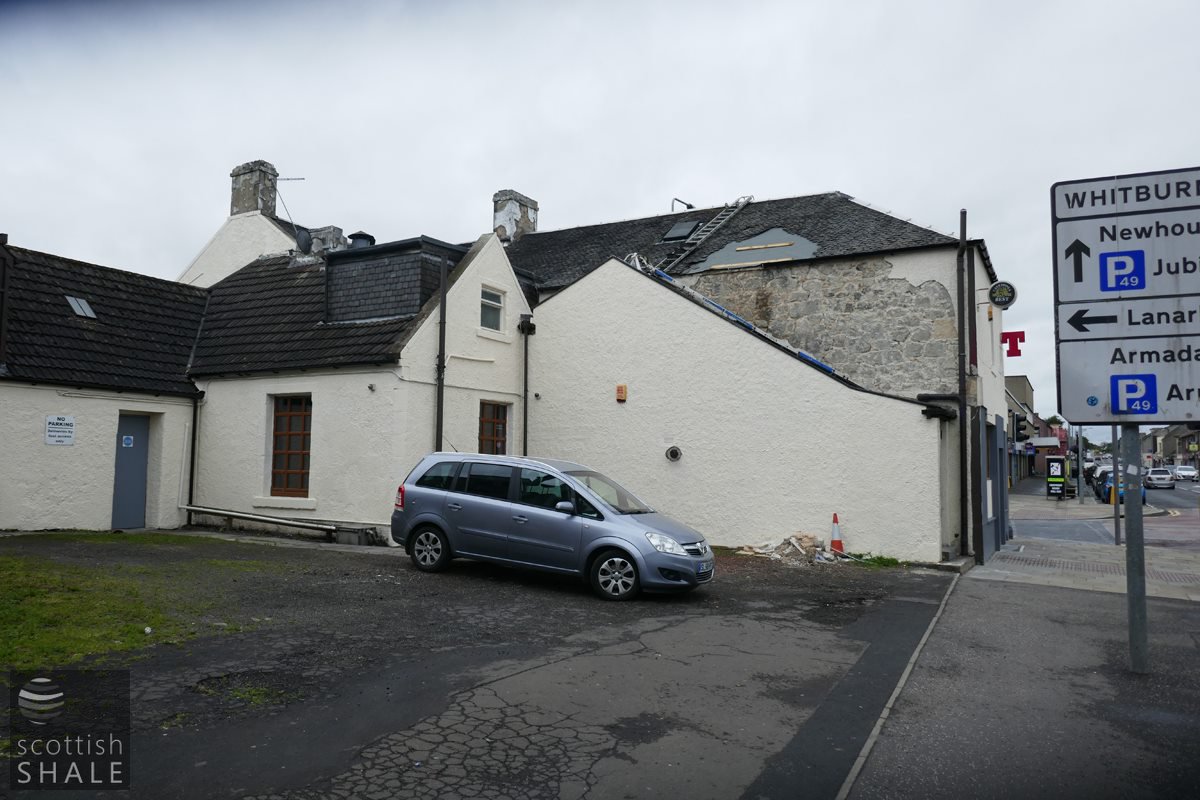