Although the caption says "Mossend & Gavieside", little detail is visible of Gavieside, on the right of the image, other than the chimney at No.11 pit.

Drains and roadways are currently being installed on a site beside Polbeth Road, Gavieside, prior to construction of 21 new homes. These excavations are revealing the remains of the lost settlement of Gavieside; the earliest of West Lothian's shale villages.

In 1861, several year's before James Paraffin Young began work on his mighty Addiewell oil works, Alexander Morrison Fell leased the minerals of Gavieside and established the West Calder Oil Company. The company's oil works at Gavieside (now site of Five Sisters Zoo) was the first in the West Calder area, and a substantial village was built from about 1863 to house its workforce. By the 1870's the village contained 110 homes in rows of between four and ten houses, forming a single line facing onto Polbeth Road, and backing onto Briestonhill Moss.

A.M. Fell fell out with fellow directors in 1870, was later declared bankrupt, and then emigrated to Australia where he went on to play a major role in development of the shale oil industry in New South Wales (but that's another story). The West Calder Oil Co. Ltd collapsed in 1878, and the works and village was put on the market. After several years these were bought by Young's Oil Company at a knock down price. The Gavieside oil works were gradually dismantled, and Gavieside rows were used to house many of those working in Young's Polbeth shale pits. These must have been tough times for Gavieside's original residents, and it seems likely that some followed Fell's example and emigrated to New South Wales. 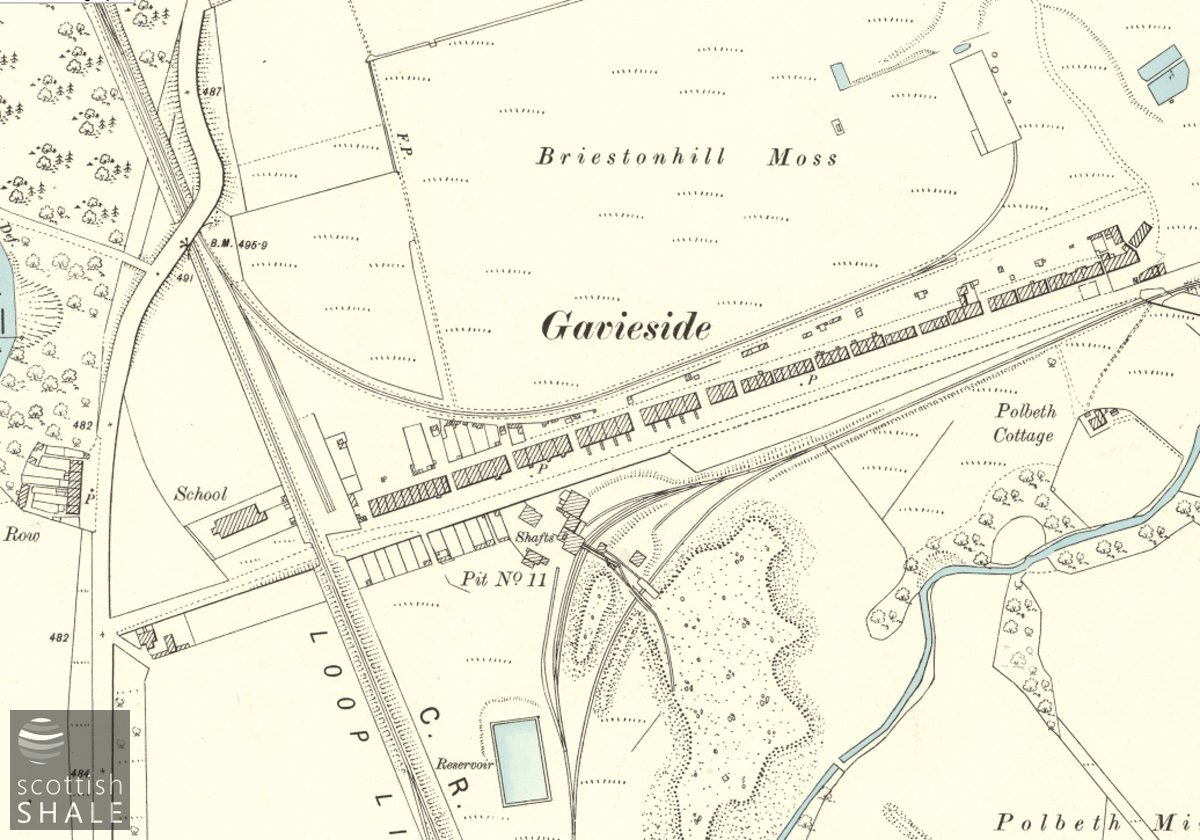 25" OS map c.1896, courtesy National Library of Scotland.
Many of Gavieside's houses looked out onto the pithead and engine houses of No.11 pit. 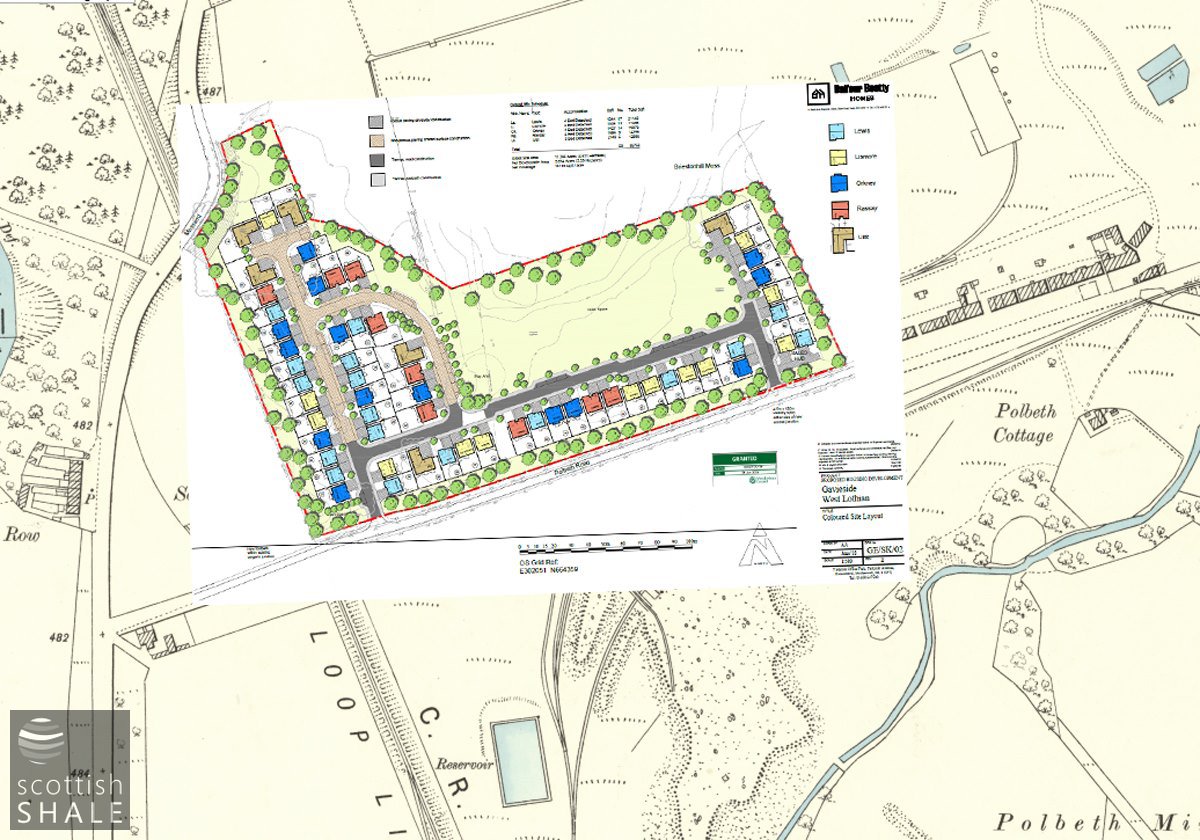 We have no clear photographs of the Gavieside rows, but maps show there was a variety of housing types, ranging from mean single-room dwellings to larger blocks that might have been two-storey. The West Calder Oil Co. constructed a school for the village in about 1872, and by 1873 Gavieside had its own Cooperative society and store. A reading room, managed by a committee of residents, was opened in 1895.

Immediately to the south of Polbeth road, within a few yards of some homes, were the pithead buildings of Polbeth No.11 shale pit. The pit once employed over 300 men and seems to have suffered more than its fair share of accidents. Perhaps the most tragic of these occurred in 1885 when a cage containing miners became jammed when descending the shaft, and when it suddenly freed, plummeted to the pit bottom. Samuel M'Curley, aged 20, Thomas Duggan, aged 19, Alex Sanderson, aged 15, and Thomas Reid, aged only 14, all died in the accident. Newspapers reported many other dramas that took place in Gavieside – thefts, suicide, wife-beating, child-neglect, and a boy run over by a railway locomotive. Doubtless there were also many happy events, but these have gone largely unrecorded.

Young's company did little to improve the amenity of their older property and in 1914 it was reported “There are 8 single and 84 double houses, 44 of which are back to back. Many of the houses are below the level of the road, and rents range from 1/- to 2/3 per week. There are no coal cellars, wash-houses or sculleries. A few stand-pipes supply the water. The refuse is removed weekly. Dry privies of a kind exist. These houses are of a very poor type, and ought to be condemned.”

A shortage of housing in the area meant that most houses in Gavieside village continued to be occupied into the 1930's, and it was not until 1939 that the final residents were moved to homes in the new housing scheme at Polbeth.

Recent work has cut through the site of the Gavieside rows, revealing bricks and perhaps rubble floors, indicating that the houses were built with few foundations, directly onto the peat at the edge of Briestonhill Moss. Further into the moss, a bed of ballast with occasion pieces of timber sleeper has been revealed, marking the route of a railway siding that once ran behind the rows to a building close to the old oil works site.

The new homes are to be built almost on the footprint of the old. Let's hope that the new residents of Gavieside enjoy an easier life than those who once shared that space. 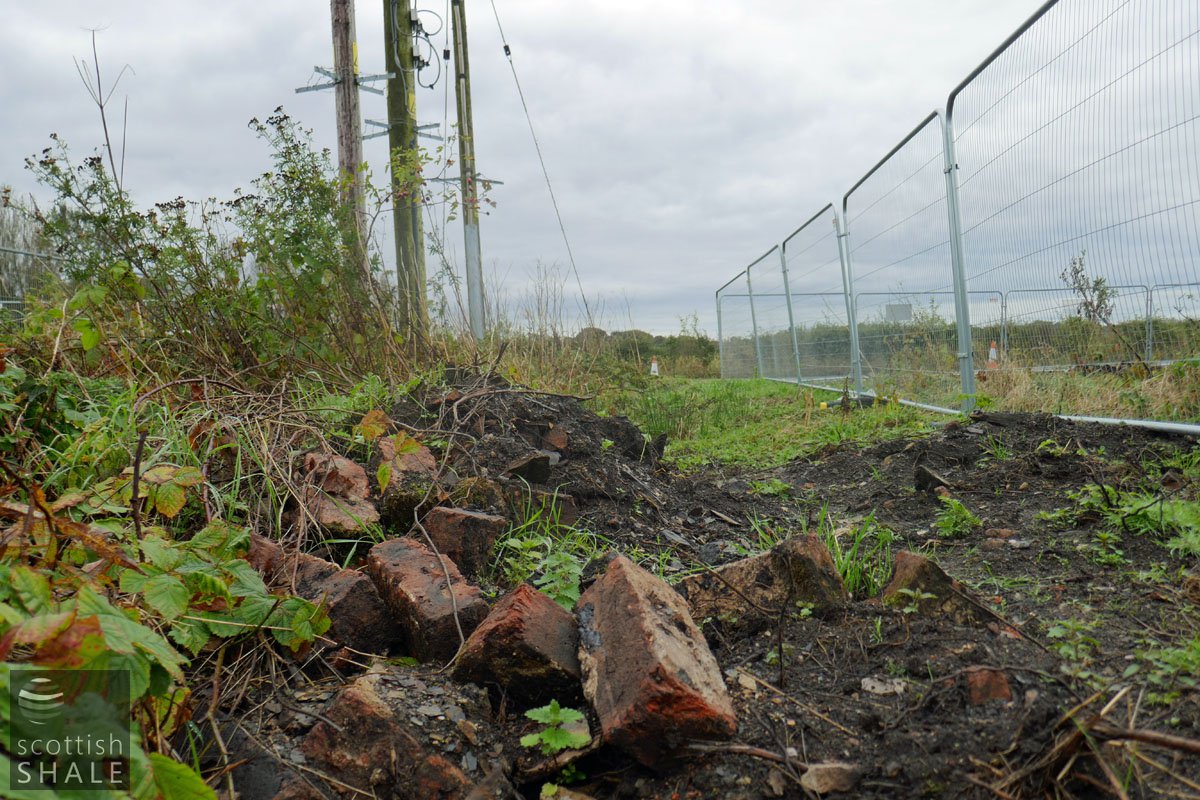 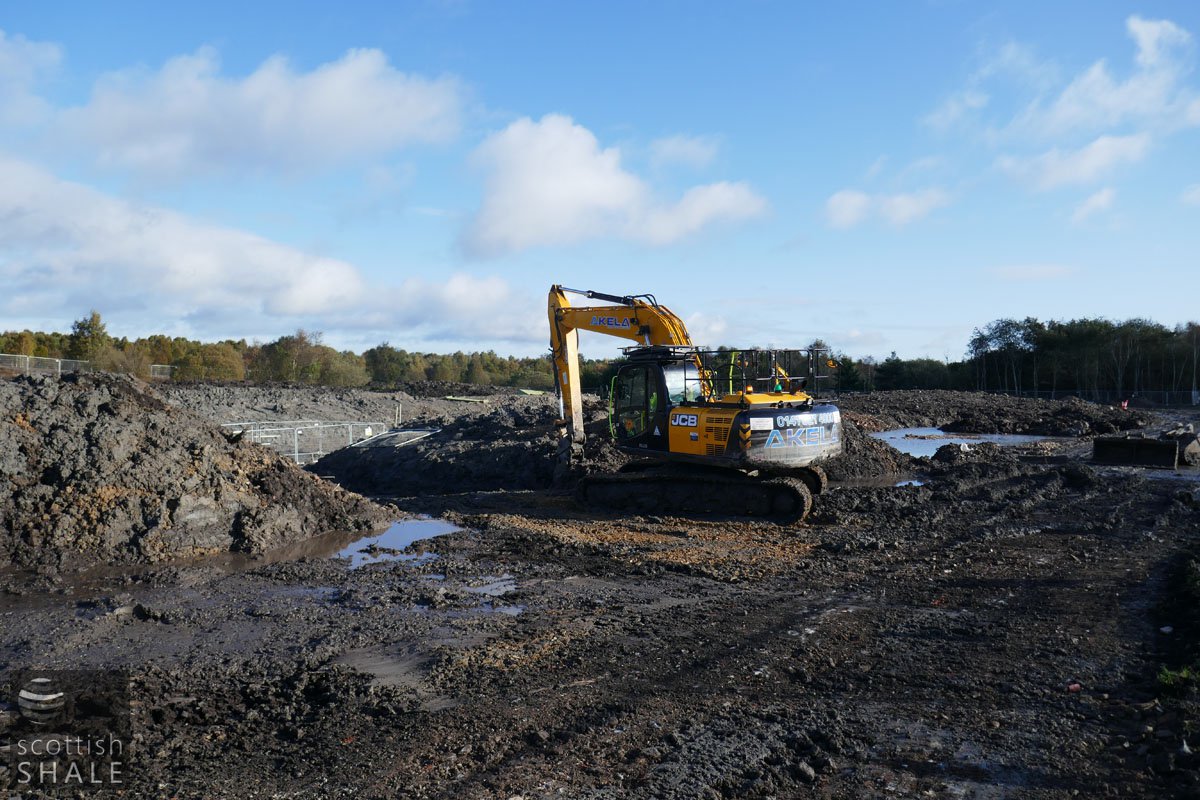 The area of broken brick in front of the digger marks the site of Gavieside rows. 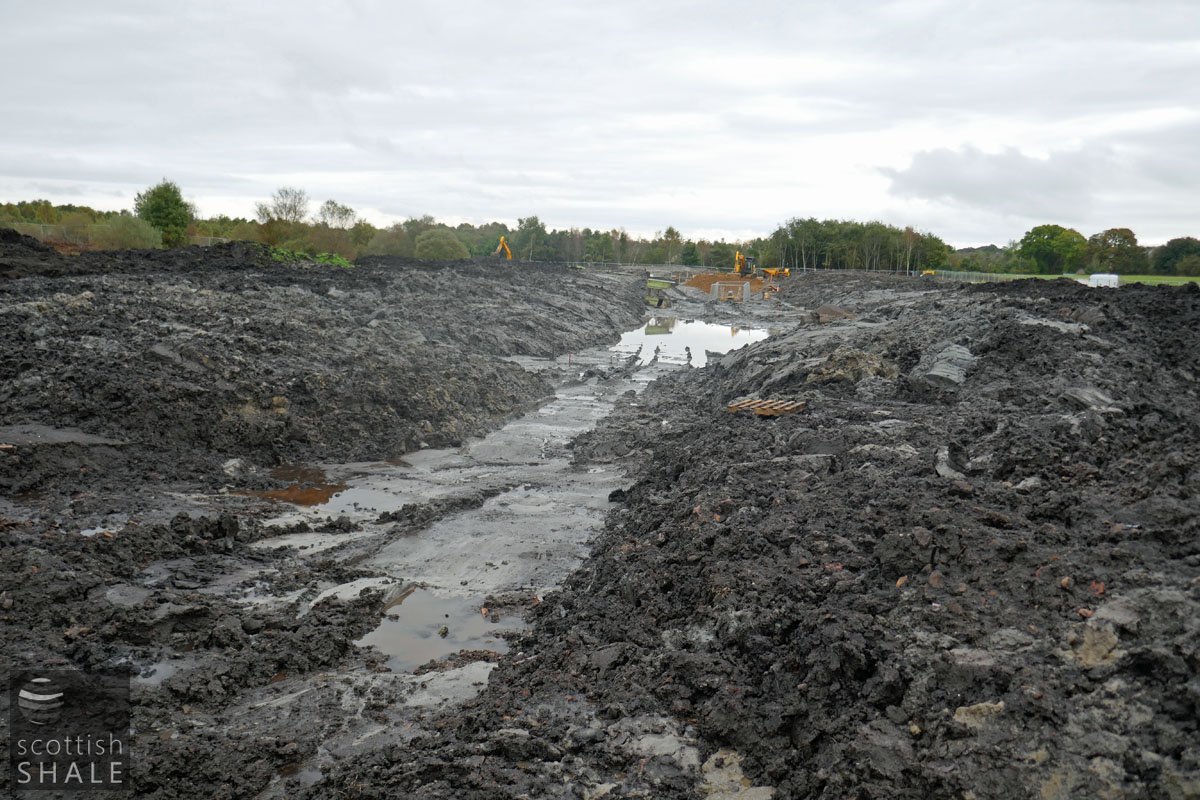 The peat of Briestonhill Moss has been stripped back to install a rainwater drainage system.