William Ewart Gladstone is the only person ever to have served as British Prime Minister on four occasions. Of Scottish descent, he was MP for Midlothian from 1880 until 1895. Gladstone is credited as one of the first to appreciate the value of political campaigning; travelling around the country entrancing crowds with fiery, dramatic, speeches than went on for hours and hours. Affectionately known as the Grand Old Man, he was a showman who relished attention and played to the crowd.

In 1890, while leader of the opposition, Gladstone chose to share his words and wisdom with the staff and management of Pumpherston oil works. On the 28th October 1890, he set off from his Edinburgh home acknowledging the cheering crowd that had assembled on the pavement outside.

The streets of Dalry were lined with well-wishers as his carriage sped past, heading for the village of East Calder where homes were decorated with colourful swags and garlands. The word “welcome” had been picked out in greenery above the entrance to Calder Hall where they were met by the great and good of the area, including senior figures from the shale oil industry. After a fine lunch, the party headed to Pumpherston, where the workforce of the oil works had been granted a day’s holiday. Many occupied themselves creating triumphal arches, banners, mottos, and other colourful decorations displayed around the village and oil works.

The party toured the pithead of one of the shale mines, followed a lavishly decorated route through the oil works, and arrived at the refinery where a large stage had been constructed. In front of a cheering crowd of workmen, Gladstone was formally welcomed to Pumpherston, with additional greetings presented by three members of the workforce; John King, an engineer, David Greig, a miner, and David Shaw, a bricklayer.

William Fraser, Managing Director of the Pumpherston Oil Co., then presented Mr Gladstone with a case containing a collection of products manufactured at the works. Mrs Gladstone was presented with a case of the company’s “laundrine” washing powder (a gift both thoughtful and practical) and two busts of Gladstone manufactured from white paraffin.

Once the cheering subsided, Gladstone addressed the crowd. Pointing at Mrs Gladstone’s busts he proclaimed “I see here a beautiful work of art”:…..” and I see you rise to the production of art out of the rudest of all materials of which the earth is composed”. He went on to speak about the superiority of paraffin candles, then rejoiced that the body of Scottish workmen before him had the vote; a privilege that their fathers and grandfathers never enjoyed. It was an area of progress, he said, that he had a hand in bringing about. After a long and lively speech covering many political issues of the day, he finished by again referring to the gifts that he had been presented with; “Gentlemen, I thank you again for these specimens of British Industry”.

Gladstone’s return journey passed through the shale village of Oakbank where again the route was lined with colourful decorations and cheering workmen. Given the lateness of the hour, all had to be content with a short address rather than the planned tour of the Oakbank oil works. After further tea at Calder Hall, the carriage sped home “with the greatest amount of speed”.

It’s not known whether Gladstone ever thoughtfully toyed with the vials of coloured oil, the blocks of wax, and jars of powdered chemicals contained within his presentation case. We can only guess whether Mrs Gladstone ever opened her case to lovingly caressed the wax busts of her husband, or ever thought of Pumpherston while washing his socks.

It seems that these contents have been lost through the course of an uncharted history, but the presentation cases, with their engraved commemorative plaque have at least survived. While the exteriors are scuffed and warped, the satin-lined interior is as bright and colourful as the day that it first cradled “some fine specimens of British industry". 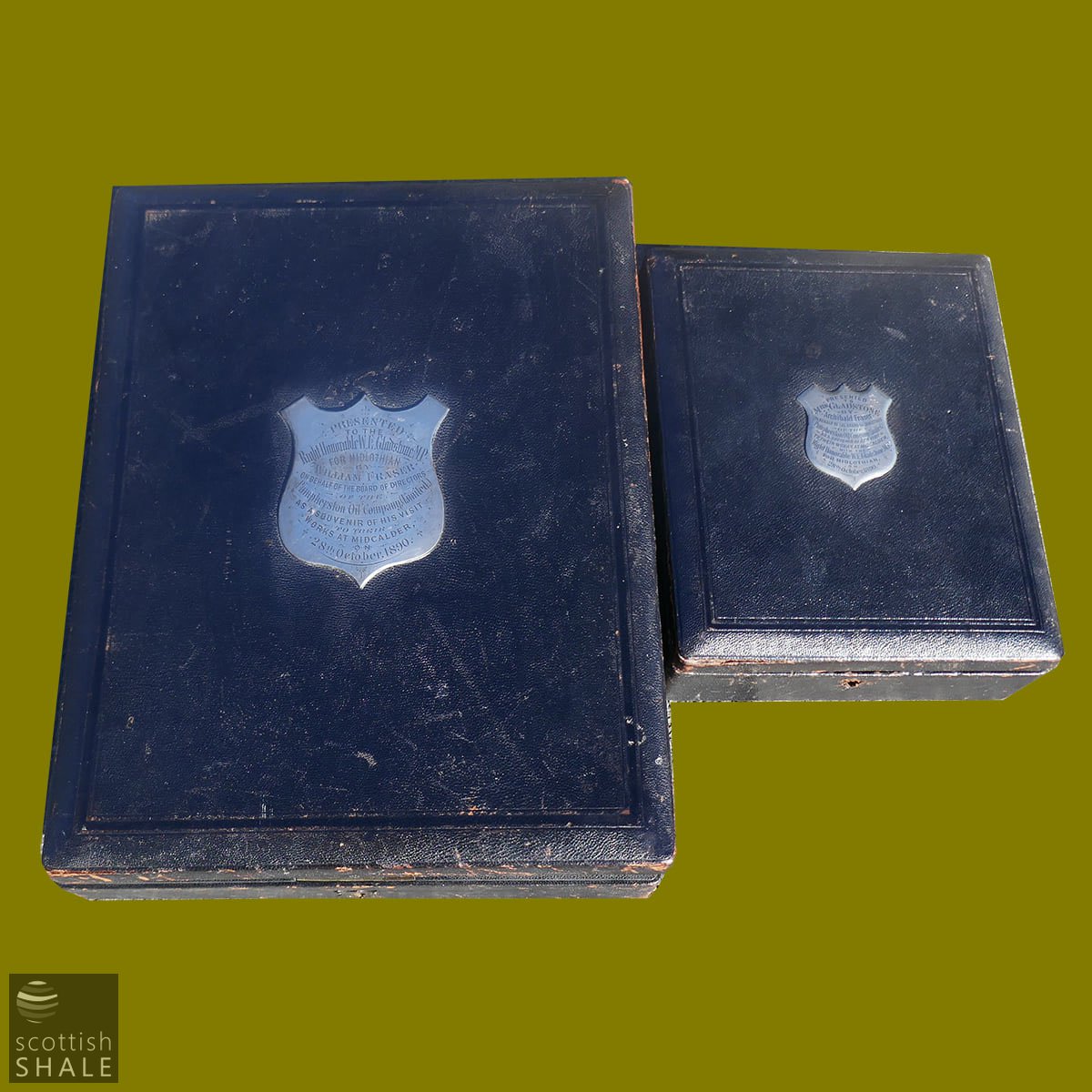 Exterior of the presentation cases 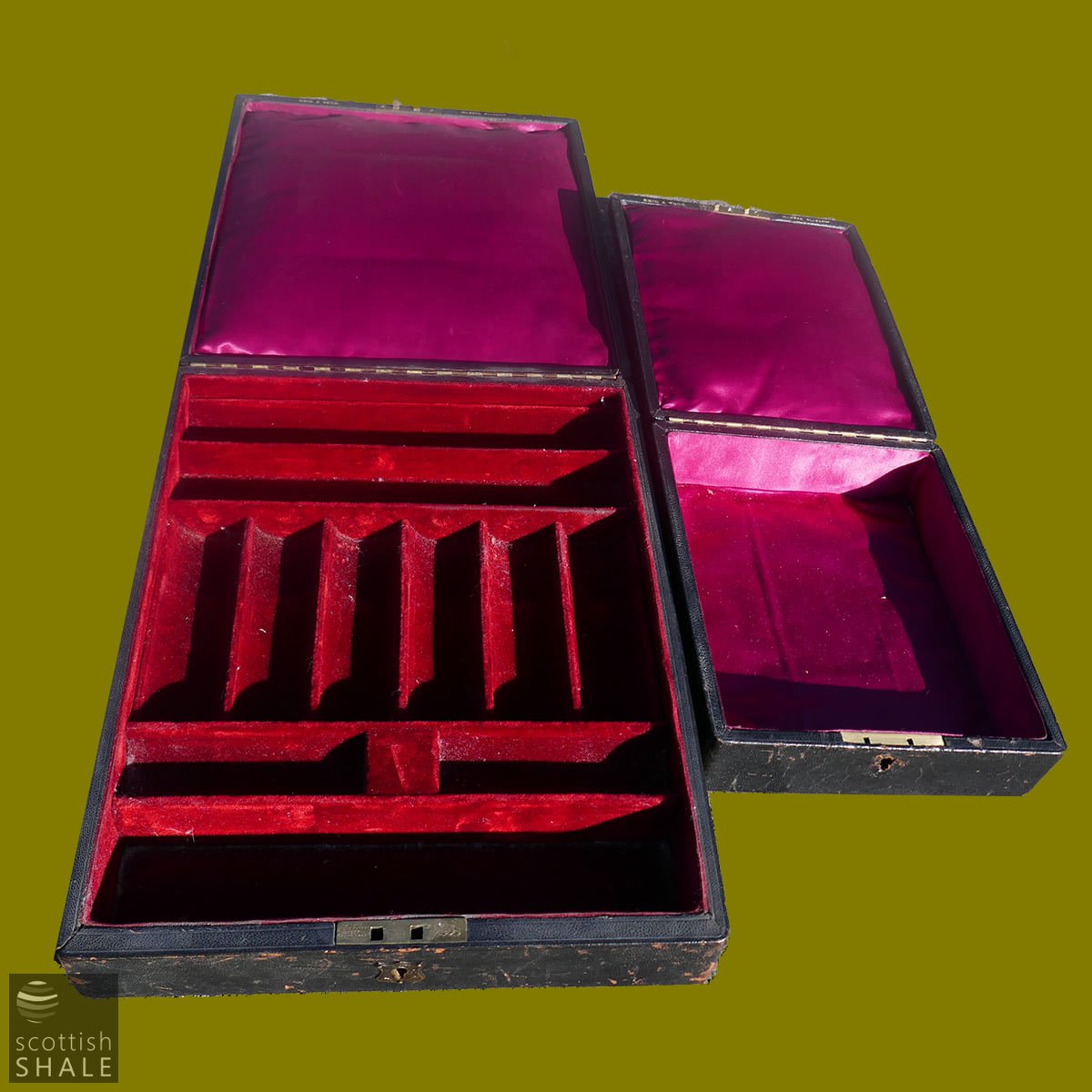 Interior of the presentation cases 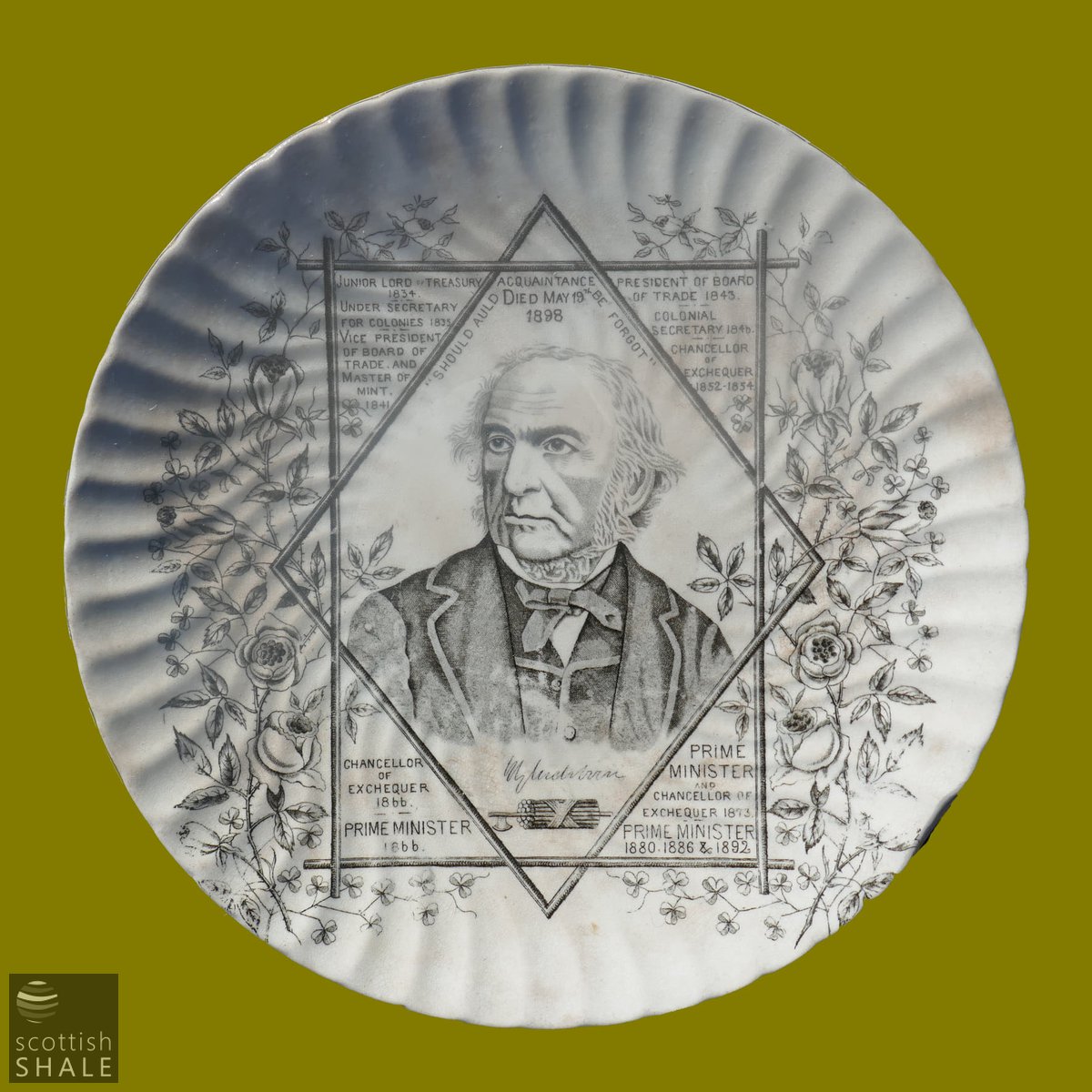 Commemerative plate, perhaps made by one of the Bo'ness potteries.