The Great Fire of Torbanehill

The Boghead coal, or “torbanite” was a highly prized and exceptionally oil-rich mineral, found only in a narrow seam over an area of about five square miles to the south-west of Bathgate. The coal supplied James Young’s oilworks at Inchcross near Bathgate, was used in gas works throughout Britain, and was even exported to the USA and other distant parts for production of oil or gas. A series of high profile court cases between William Gillespie, who owned the Torbanehill estate, and Russel & Son, who had acquired the right to mine the mineral, ensured that the famous Torbanehill mineral was a regular topic of public discussion.

Russel & Son began mining the Boghead coal in about 1850, but by 1868 reserves were virtually exhausted, except for areas beneath Torbanehill House, farm, and garden. These had been left unworked to avoid the risk of subsidence, and had been specifically excluded from Russel’s mineral lease. By chance, the seam was at its thickest and richest in these areas, and as other supplies dwindled, the value of this mineral reserve steadily climbed.

In 1868, according to one account, William Gillespie gave these mineral reserves free of charge to friend and banker Robert Gardner as a “gesture of gratitude” for support extended during expensive legal actions. This is contradicted by other reports, but it certainly seems that Gardner, in partnership with Fauldhouse coalmaster, Thomas Thornton, were brought in to sink a pit, probably at a site immediately west of the walled garden. All the Boghead coal had been worked out from beneath the estate buildings by 1871, but most remained stockpiled in a huge heap close to the pithead, probably occupying most of the area of the old walled garden. That year, Gillespie was reported to have sold the stockpile to Benhar coalmaster George Simpson (a man associated with countless dubious deals) and Glasgow oil merchants Miller & Co., for a reported sum of £70,000 – over four million pounds in today’s money. Gillespie held back a ton of mineral and, “with the liberality and provision which distinguish Mr. Gillespie”, distributed specimens to museums and scientific bodies throughout the world so that “so wonderful a substance” shouldn’t “disappear from the face of the earth”. He clung to the hope that a future generation of scientists would prove his assertion that the Boghead coal was a new class of mineral.

The main heap of Boghead coal, almost 30 feet high and said to contain almost 35,000 tons of mineral, was still mostly in place in June 1872, although work had begun to cart it to a field close to the railway in the Boghead estate, half a mile distant. The heap was generously insured and guarded by a watchman.

On Monday the third of June at about 1 o’clock in the morning. David Newton, engineman at Trees pit, a mile to the north, saw flames and dense smoke rising from the heap. The estate overseer was awoken, people began to congregate at the scene, and a fire engine was brought from Young’s Bathgate chemical works. By 3 am teams were working to play water on the burning part of the heap and cart away the coal to a safe distance. Efforts were hindered by a lack of water, flames spread out in all directions and by 8am the fire was out of control. 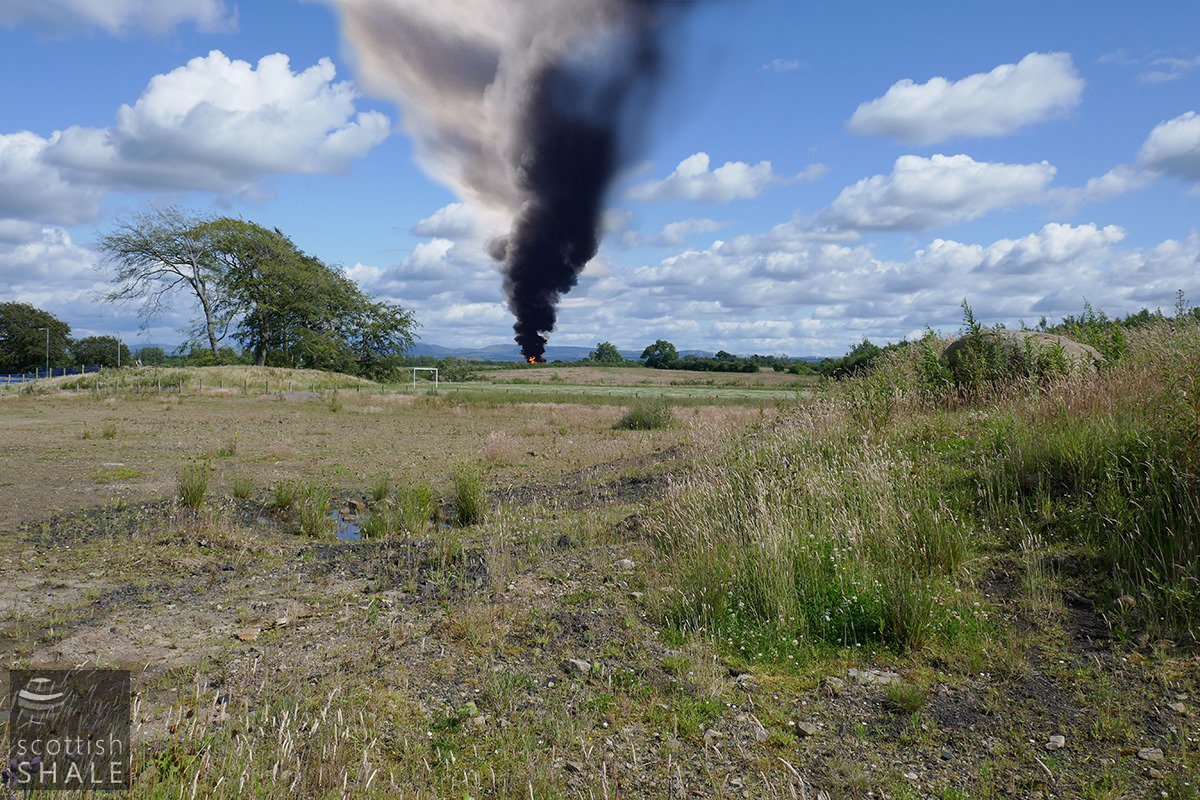 Near the site of Trees pit - close to Armadale Asda and Southdale primary school. The fire was first spotted by the engineman, presumably tending to the pumping engine through the night. 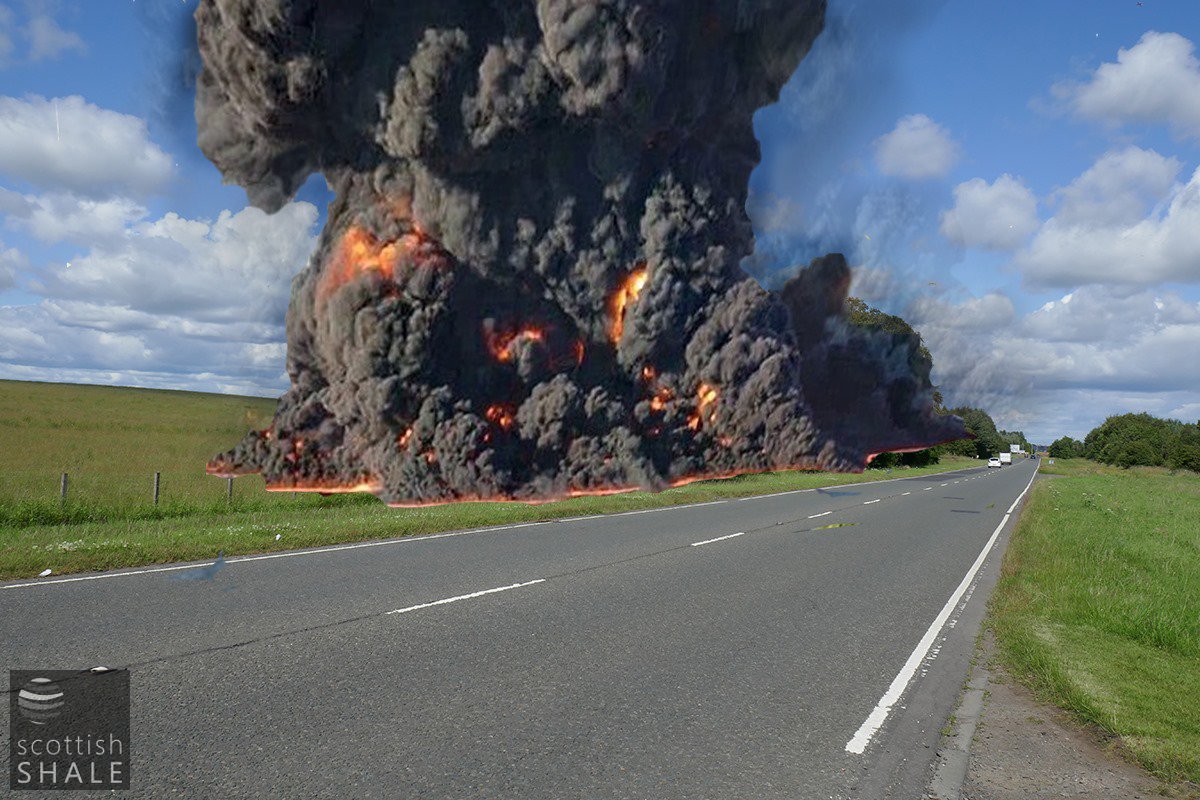 The site of the fire in the old walled garden of Torbanehill House. With the A706 looking east towards Boghall roundabout. 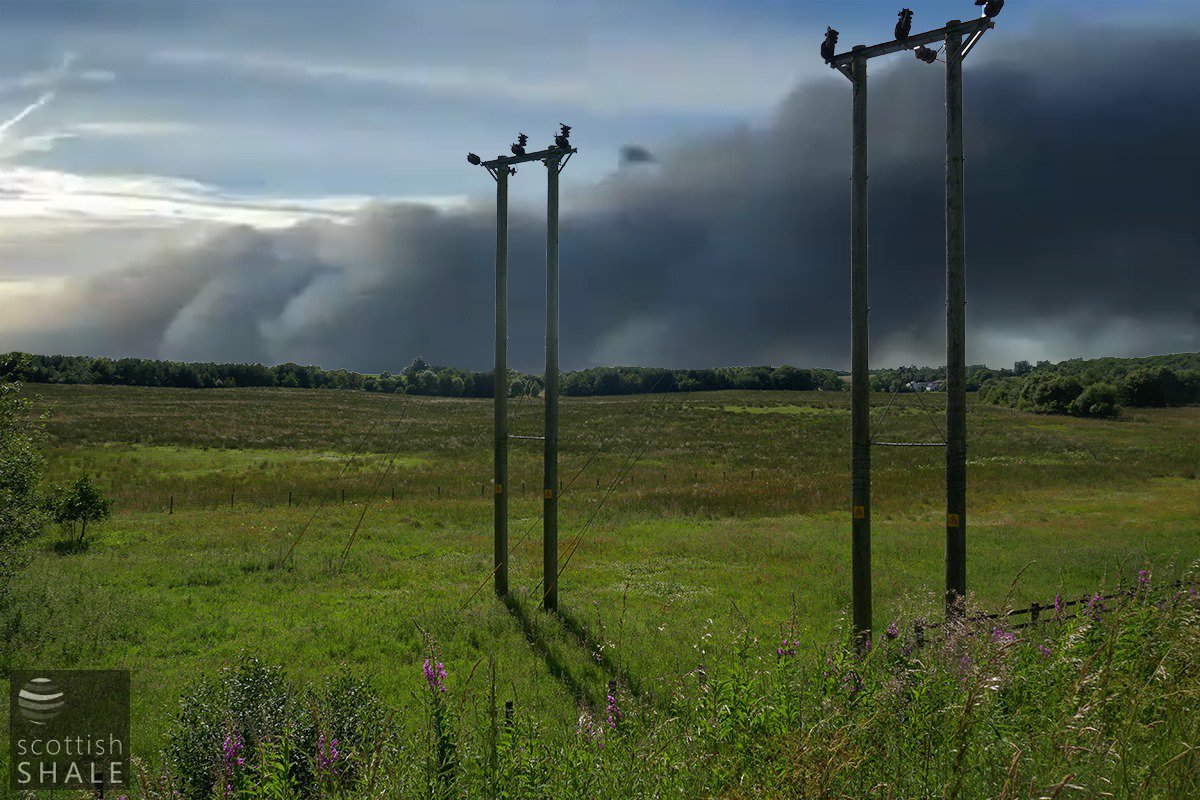 The green patch free of rushes in the centre of the image marks the spot of Torbanehill No.3 pit. Efforts were made to couple the pit pumping engine to a line of hoses, but the high pressure repeatedly blew the joints.. Looking west from the A801 across land that was opencast during the 1990's. 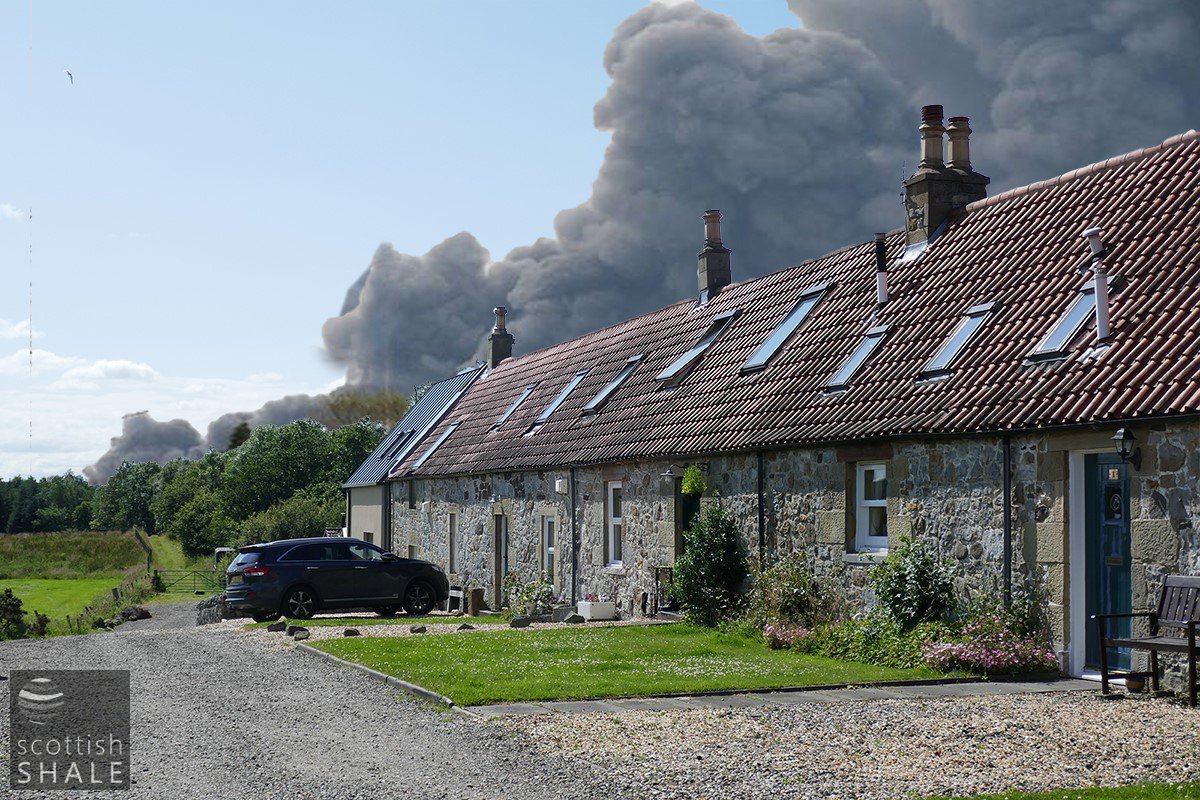 Drum Farm, looking west towards a marshy area where crude oil was scooped up and put into barrels. 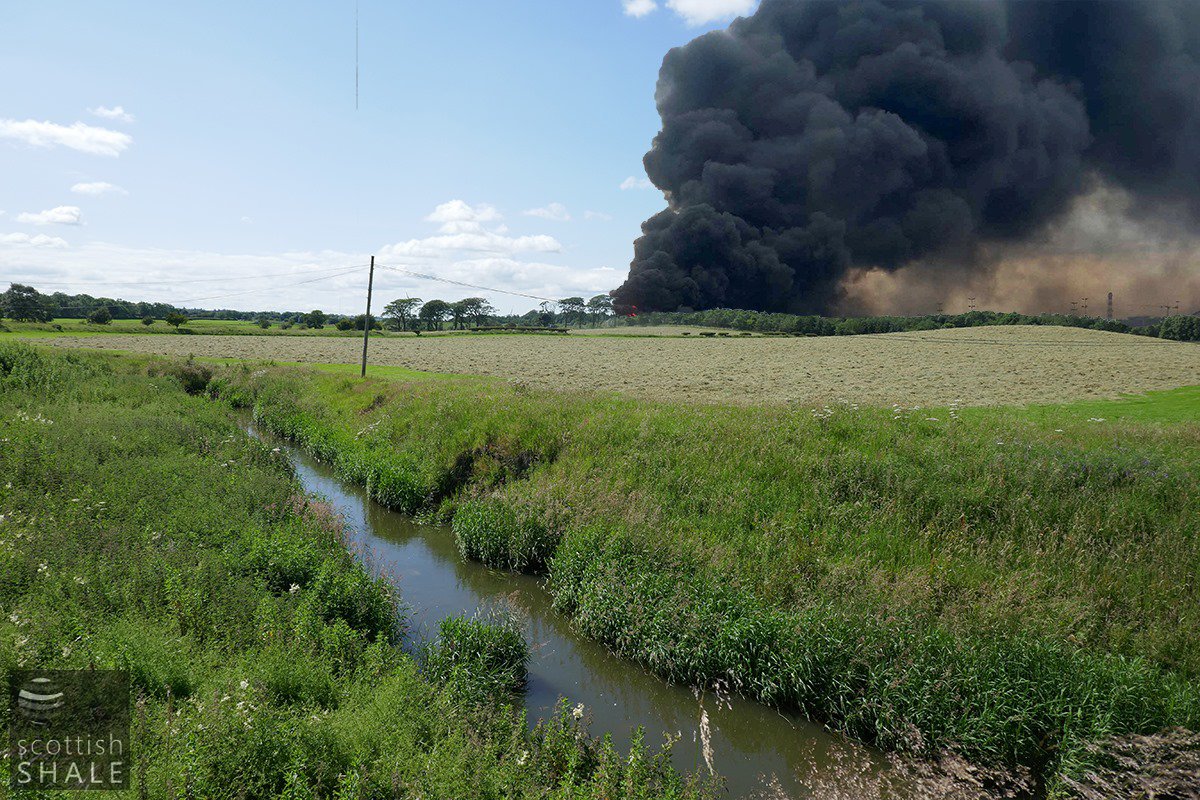 The River Almond close to the bridge on the abandoned Bathgate to East Whitburn road. A chain of three fire engines pumped water from the river to the scene of the fire.

Authorities in Edinburgh and Glasgow were then telegraphed for assistance. A special train carrying a fire engine from Edinburgh was dispatched by 9am, a second by 11am. It took longer to organise help from Glasgow and their fire engine didn’t reach Torbanehill until 2.30 pm. Trains of oil tanks and wagons shuttled between Boghead pit and Torbane with supplies of water. Additional hoses arrived by train from Glasgow late in the afternoon, allowing a chain of three fire engines to be set up pumping water from the River Almond 500 m, to the south. At last, a continuous stream of water could be directed on the fire, but little progress was made in subduing the flames until late in the evening.

Throughout this time, much of Bathgate was plunged into a gloomy haze. As poetically reported by the Falkirk Herald “as the day waned, the red flicker of flames…. had a picturesque effect, and the tongues of fire leaping at the base of the dense column of black smoke could be seen at a great distance”

The fire had destroyed a smith’s shop (presumably part of the pithead buildings) and areas of the garden wall. The heat of the fire had also served to release crude oil from the coal, which began to stream out from the base of the heap, and holes were hurriedly dug to collect the liquid and then transfer it to barrels

As Tuesday dawned, the centre of the heap continued to burn. A further fire engine arrived from Glasgow, and at 2 o’clock a line of hoses were run to the pumping engine of No.3 Torbanehill pit, greatly increasing water supply for a period until the pressure started blowing the hose connections. A mess of liquid oil and water overflowed the makeshift bunds and entered a drain flowing towards Drum Farm. This then choked and overflowed across the surrounding fields. As the wind rose, flames took hold of new areas of the heap.

On Wednesday and Thursday the fire continued to burn, despite the arrival of further fire engines from Falkirk and Leith. Although several hundred barrels were filled with oil, the pollution soon reached the Almond, killing most the fish. The bing continued to smoulder for the next three months and oil continued to flow from its base. The oilworks at Bathgate, Bathville and Boghall supplied empty barrels so that locals could scoop up the oil from ditches, burns and the River Almond.

In the aftermath of the fire, newspapers published rants from Gillespie claiming that “by no shadow of a doubt….the dangerous and dastardly deed...was the work of an incendary...motivated by no common motives”. It could only have been started deliberately using paraffin oil. He continued “it is very evident that the common hum-drum appliances of county policemen will utterly fail to discover the perpetrator… but should one of the ablest detectives in Great Britain be employed they will assuredly be able to come upon the perpetrators. A case for Sherlock Holmes perhaps? A reward of £200 was offered but no one was ever charged.

In 1921, a further fire occurred at Torbanehill. Newspapers reported “Torbanehill House, which has practically stood empty for half century... stood on the hill facing Whitburn, from where the flames were witnessed Monday evening. The house being a bit shaky through the underground workings, was not thought worth saving, although many rabbits would be caught in it, or made homeless". 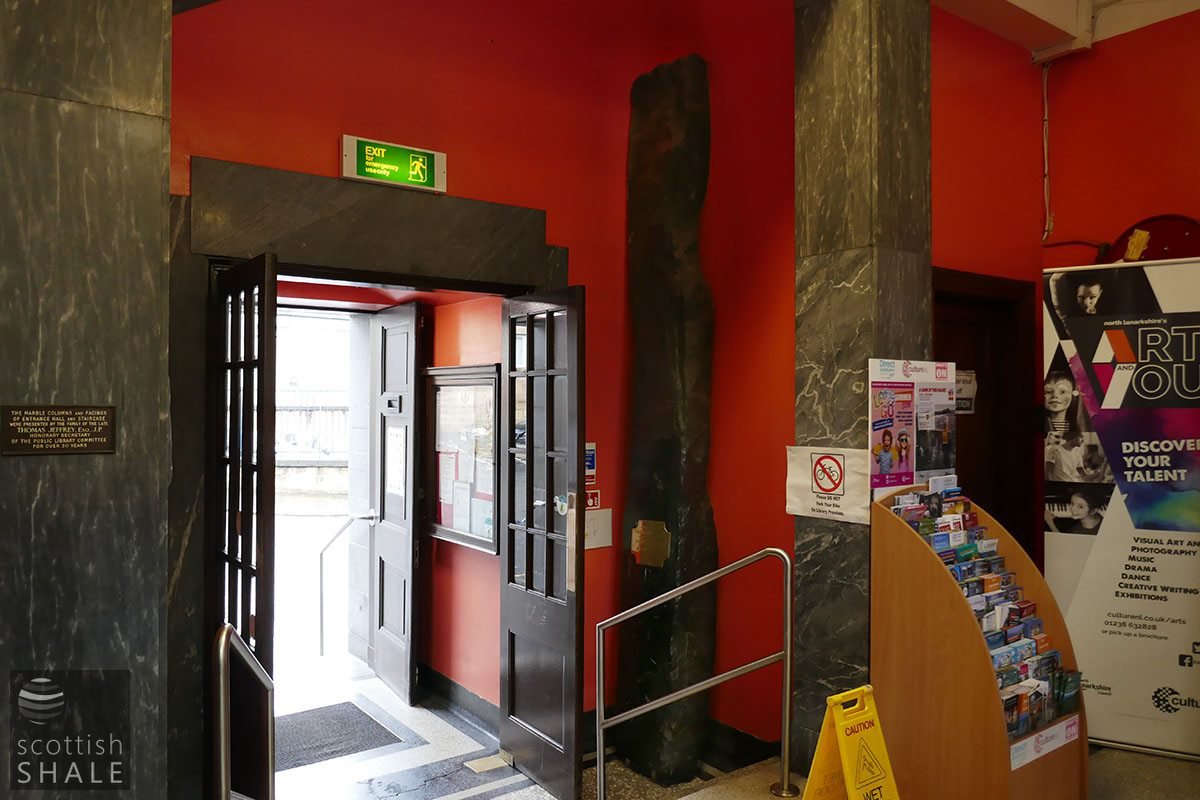 Airdrie Library, with the big monolith of "Torbanite" Boghead Coal hiding behind the door. 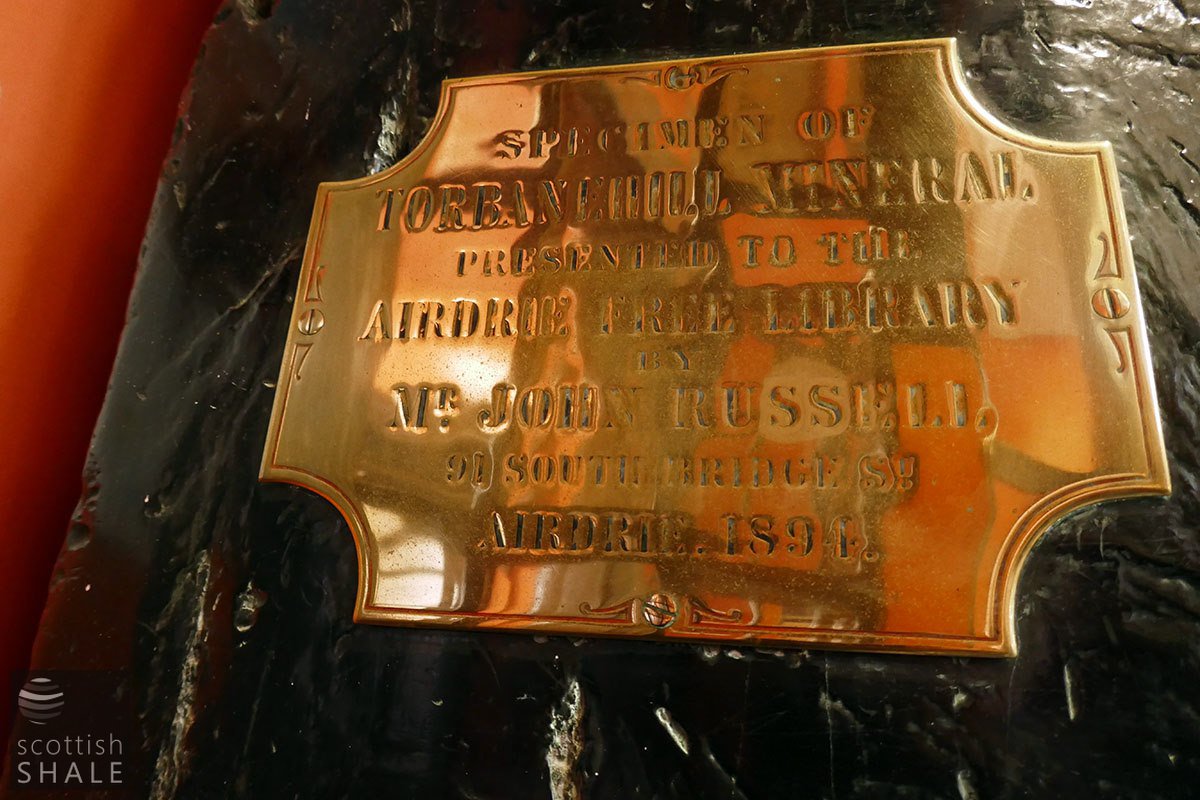 William Gillespie was reported to have donated specimens of "Torbanite" to various museums and institutions.. This wasn't one of them; but was instead gifted to the folk of Airdrie by a member of the Russel/Russell family. Generations of library assistants have polished the brass plaque, and created a glass-like finish to the surrouding mineral. 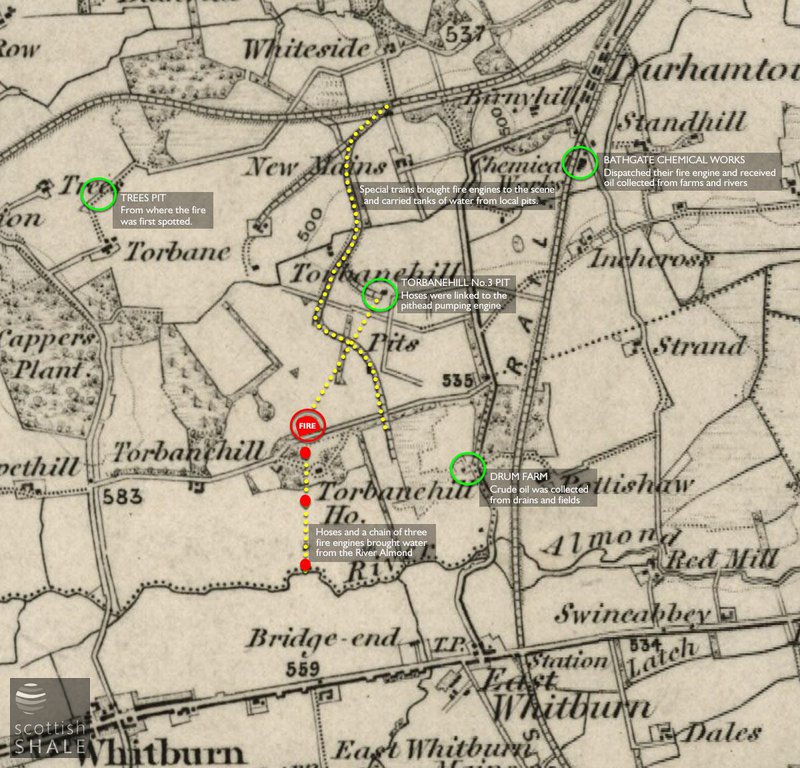 The site of the fire and associated locations. 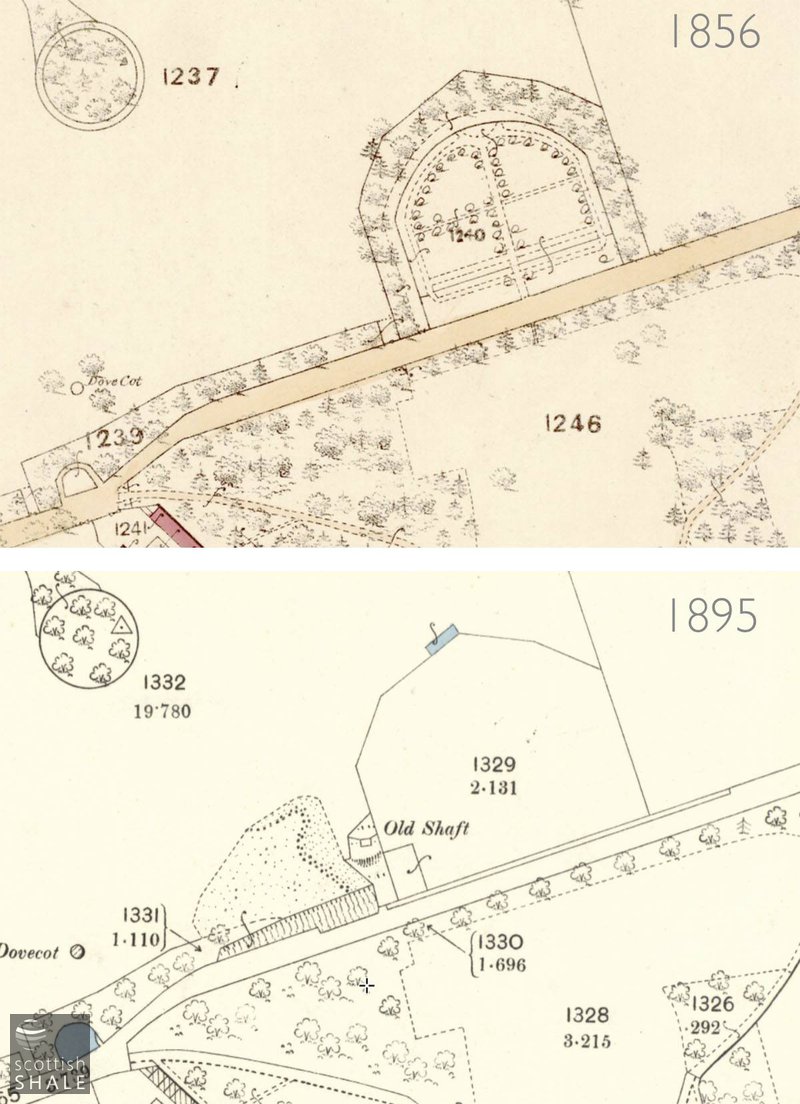 The walled garden and orchard in about 1856, prior to the fire, and the same scene in 1895, by which time the garden walls were demolished, and the abandoned "old shaft" marks the pit from which the Boghead coal was worked from beneath the house, estate buildings and garden. Images courtesy National Library of Scotland. 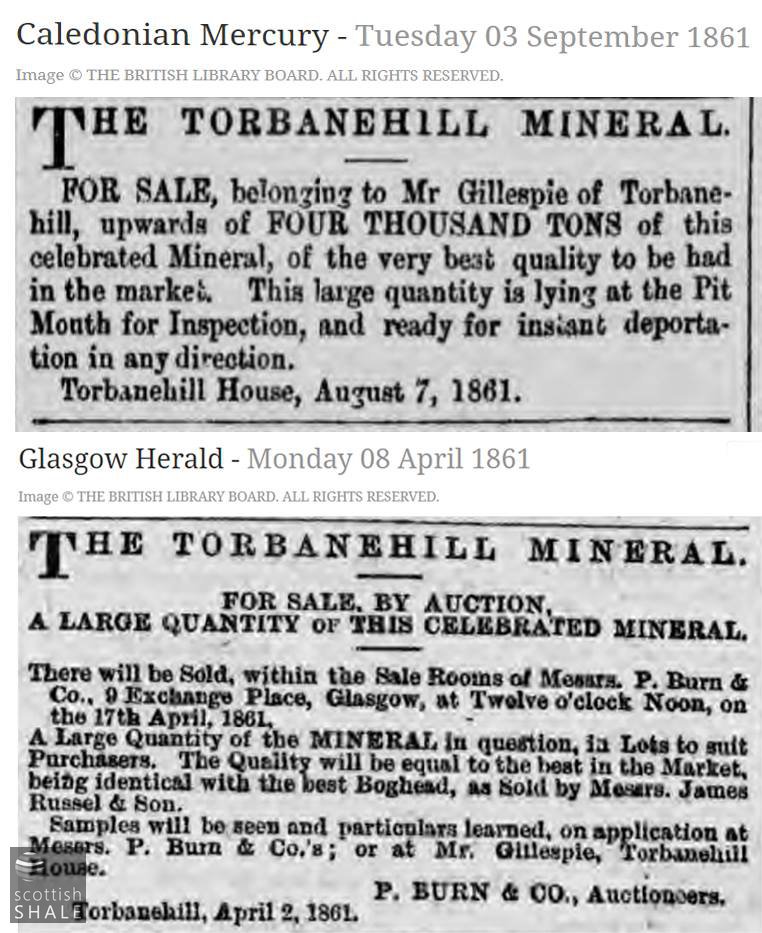 Mr Gillespie seeks purchasers for his mountain of Boghead coal.