Ironstone mining at Greenburn and Fauldhouse

The Greenhill(s) school, probably pictured around the time of its closure in c.1904.

In the early 19th century, the ironworks of industrial Lanarkshire consumed huge quantities of Scottish ironstone. New sources of iron ore were soon sought, and many of the iron companies turned their attention to the western parts of West Lothian. The lands around Fauldhouse, notably the areas of Eastfield, Crofthead, Greenburn and Muldron, were particularly rich in clayband ironstone, and from the 1820’s attracted the attentions of the Coltness Iron Company and William Dixon of Calder Ironworks.

Mining activity was restricted until about 1845, when the opening of the Wilsontown, Morningside and Coltness Railway provided a more economical way of transporting Fauldhouse ironstone westward to the iron-making districts of Wishaw and Coatbridge. The “Morningside Railway” was an early single-track mineral railway built to the Scottish standard gauge of 4’6”, initially running eight miles from a junction near Coltness Iron Works and terminating in a field just south of Longridge. It never reached its intended destination near Wilsontown Ironworks

With the opening of the railway, many new ironstone pits were sunk in the area around Fauldhouse which were linked to the railway by a network of branch lines and tramways. 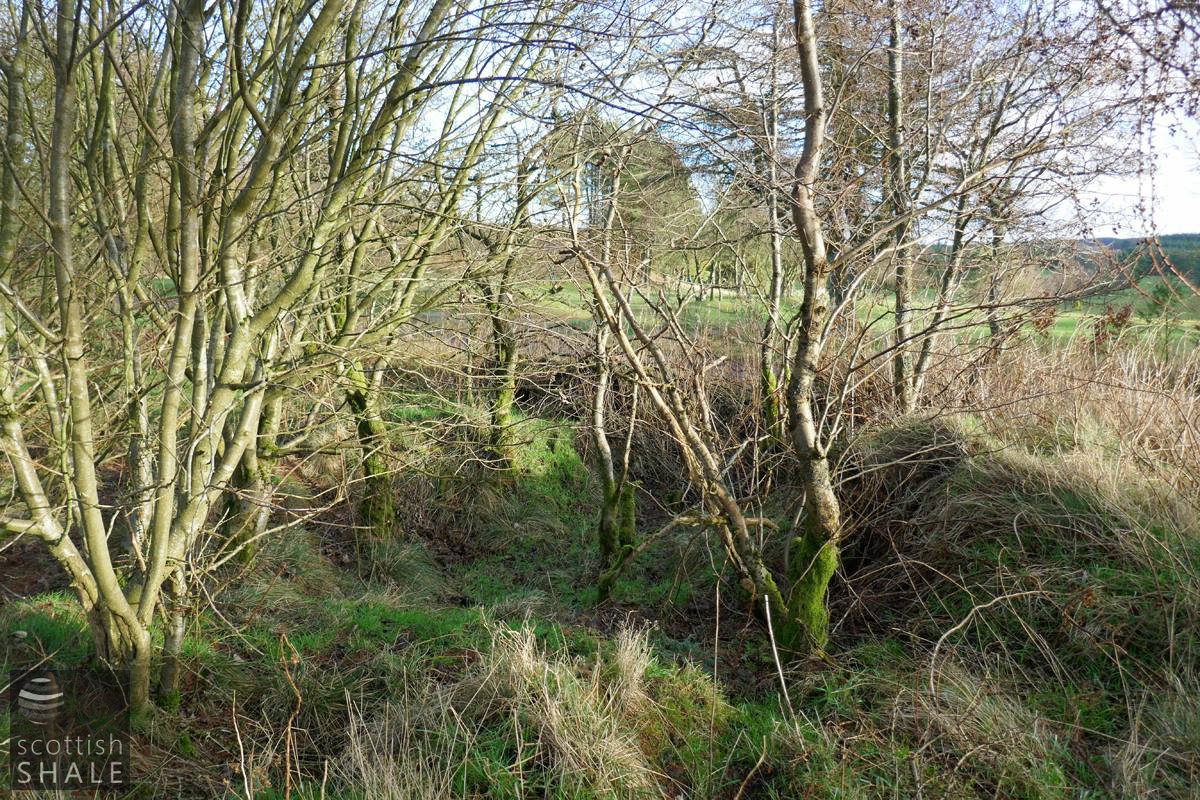 Remains of walls or foundations, obscured by undergrowth, on the site of the westernmost of the Greenhills ironstone pits. 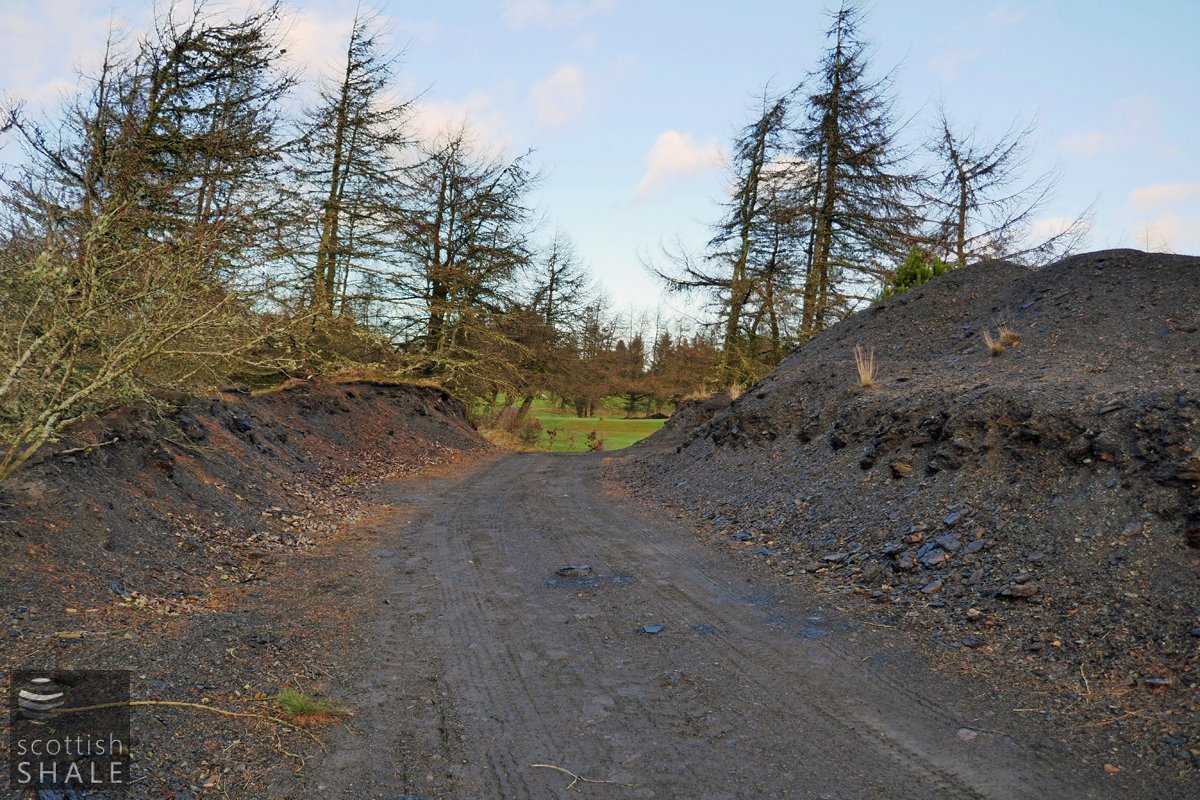 Service road on Greenburn golf course, which cuts through one of the ironstone pit bings. 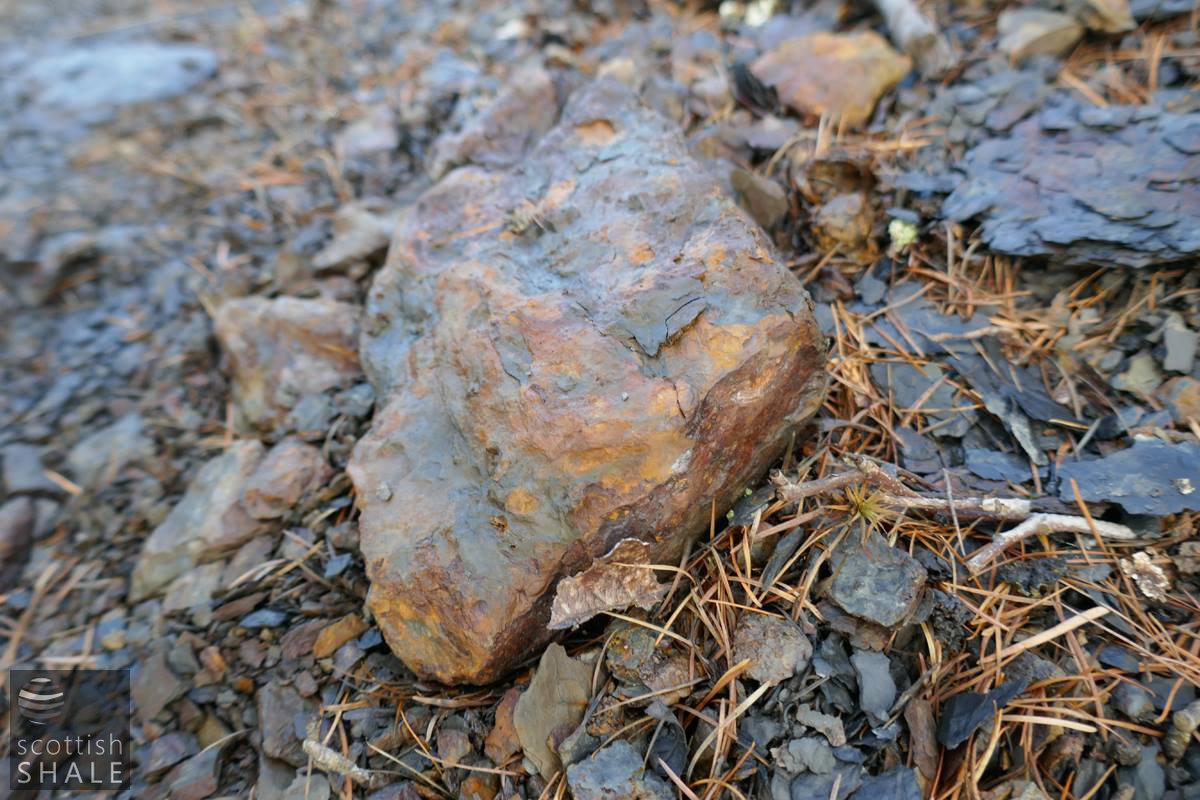 A nice lump of ironstone, revealed on the bing. 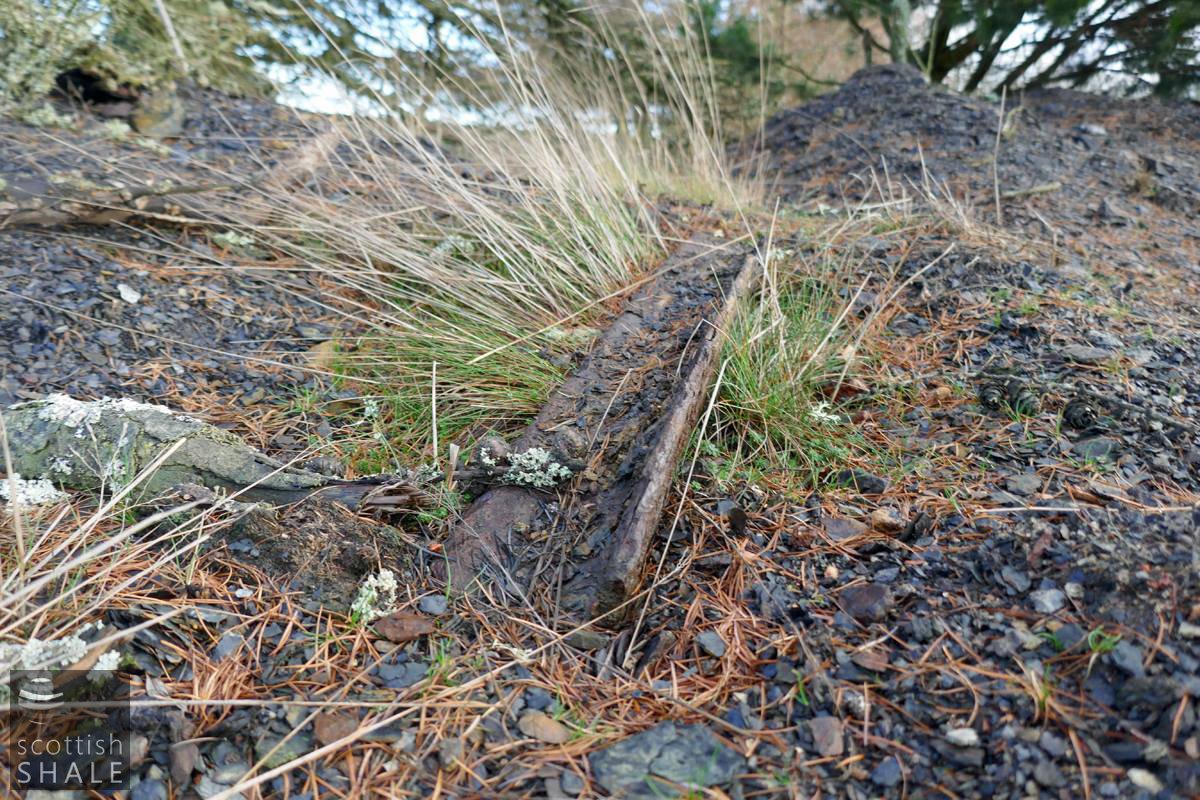 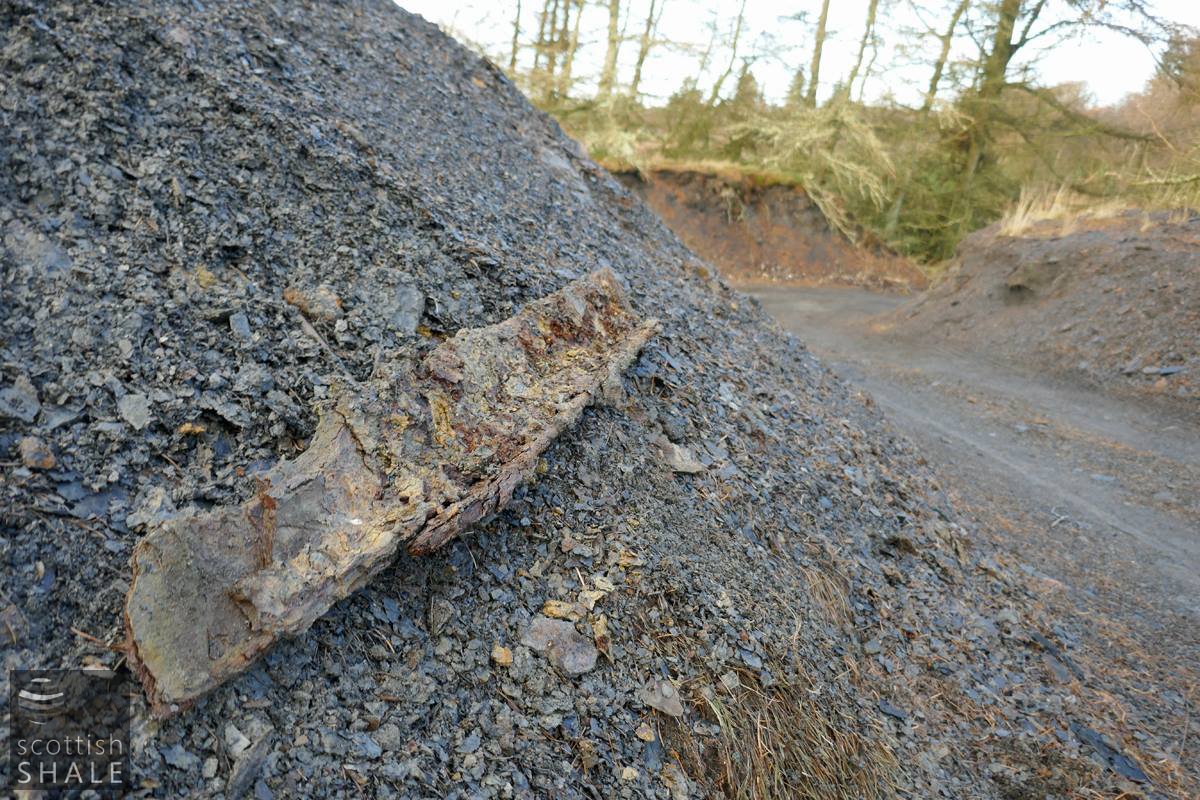 A further angled piece of cast iron, probably a plateway rail for for pit hutches, or a larger tramway?

The lands in the Greenhills (later Greenhill, and now generally known as Greenburn) were worked by the William Dixon, ironmasters who owned the Calder, Govan, and Wilsontown iron works. These areas now form the site of Greenburn golf course in the southern parts of Fauldhouse. The first Ordnance Survey map, published 1856 shows three operational ironstone mines in this area and the derelict workings of several others. Lines of horse-drawn tramway linked each pithead to a siding of the Morningside railway, another tramway burrowed beneath the railway and headed north west towards Benhar colliery, and evidence suggests that a further line headed south to link with ironstone mines high on the Muldron moors. 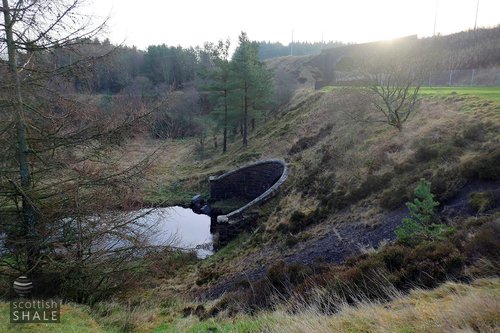 Construction of the Caledonian Railway’s Cleland and Midcalder line was completed in 1869 offering a new main line route between Edinburgh and Glasgow, and cutting across the land of Greenhills, and the Breich Water, on a high embankment and viaduct. A branchline also provided a new connection to the Muldron mines.

William Dixon & Co provided a small plot of land at Greenhills for construction of a school which was established by the company workforce in the mid 1850’s. All employees had 6d per week deducted from wages in order to pay for the cost of the school and its teachers, and operations were overseen by a committee of workmen, who were elected every six months. One headmaster noted that it was a pleasure “to serve four hundred masters. The school gained an excellent reputation and became the largest in Whitburn parish. It was taken into the public school board system in 1889 and continued until about 1904 when the new Fauldhouse public school was opened.

It seems that the Greenhills pits were abandoned some time in the 1870’s leaving a wasteland of bings and derelict ground. The area to the north of the railway viaduct was formed into a fine seven-hole golf course in 1894, which was later extended to cover most of the lands of Greenhills.

Today the landscape of Greenburn Golf Course continues to reflect its industrial origins, with raised wooded islands marking the site of ironstone bings, and fairways following the route of old tramways. Bushes beside the course hide traces of the old pitheads, while a service road cuts into one of the bings to reveal the ironstone blaes and an occasional lump of the rich ore that once brought wealth to the area.

Above left: Hole No.3, with a culvert carrying the Breich water beneath the Caledonian Railway, showing exposed material from the ironstone pit bing, supporting little vegetation. 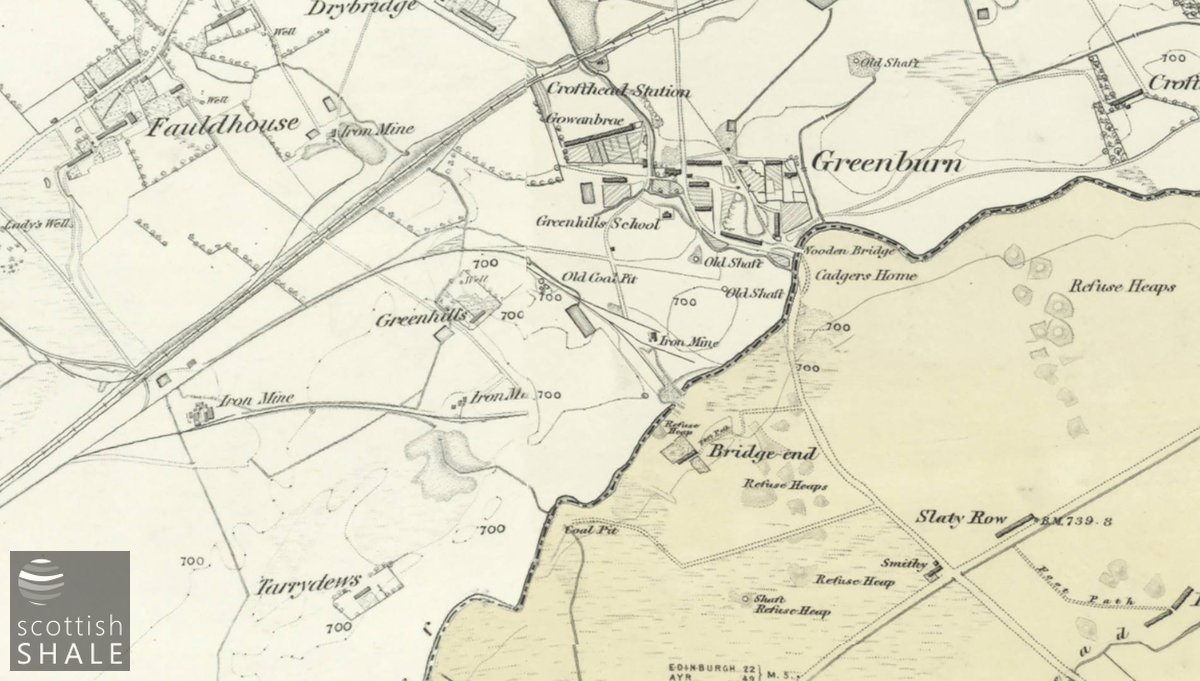 Courtesy of National Library of Scotland. 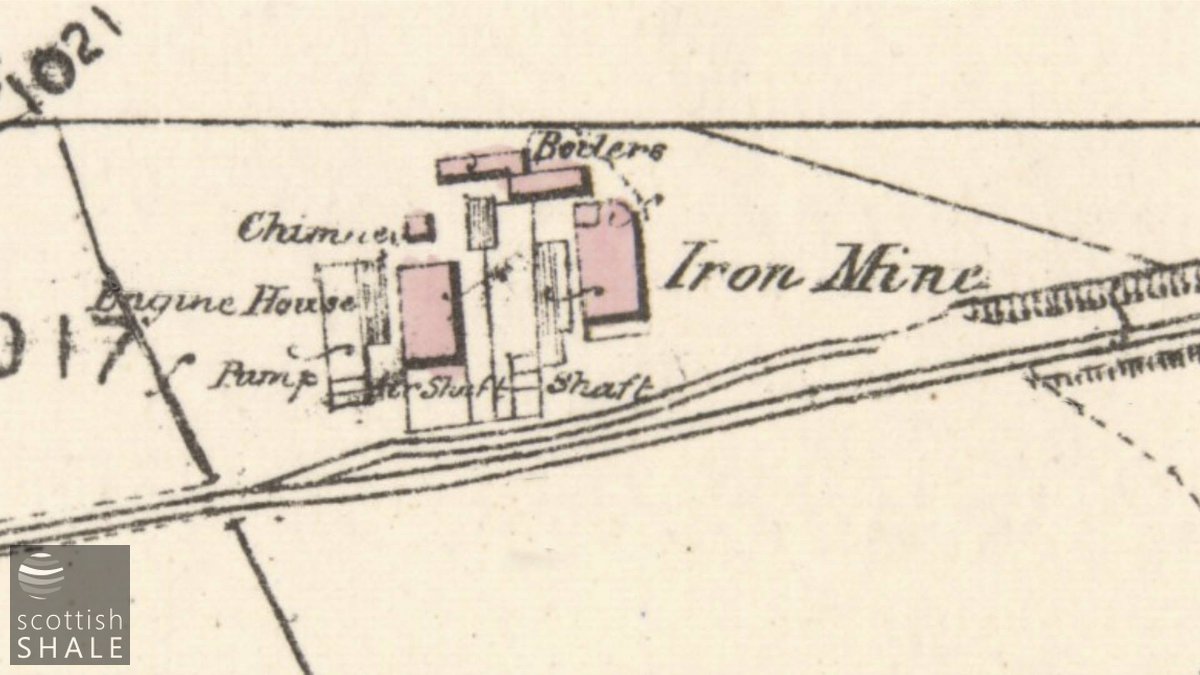 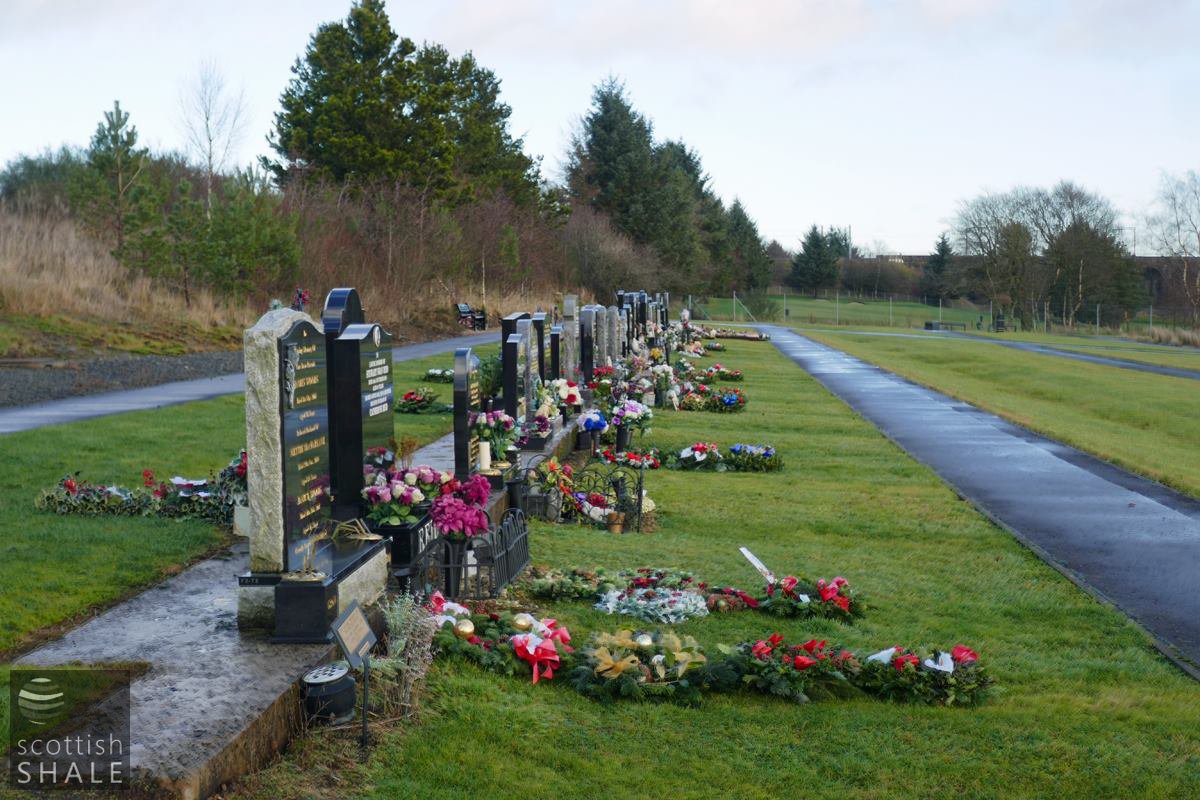 Memorials on the lower terrace of Fauldhouse cemetery, aligned along the route of the former tramway, with the raised route of the Wilsontown, Morningside and Coltness railway on the left. 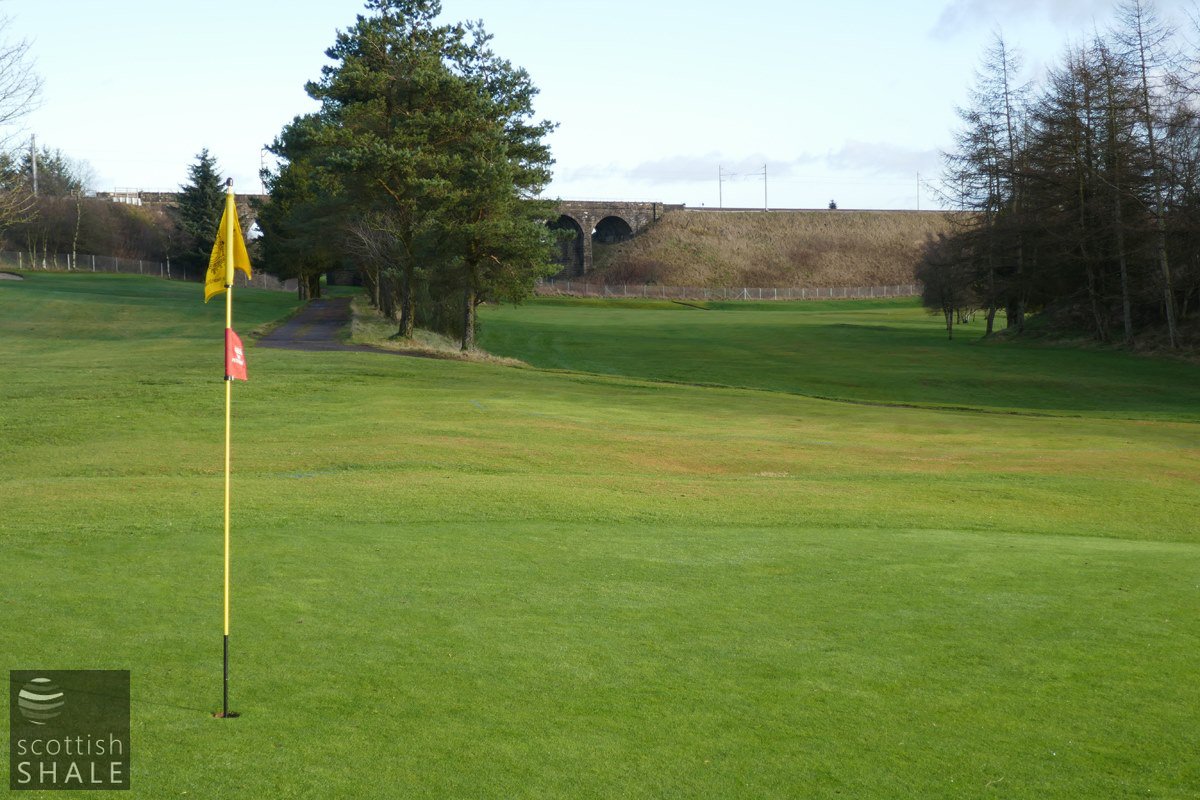 A lovely green, with trees on the right marking the site of a pit bing, and the path straight ahead marking the route of the tramway, which latterly passed beneath the viaduct carrying the Caledonian Railway Edinburgh to Glasgow route via Shotts. 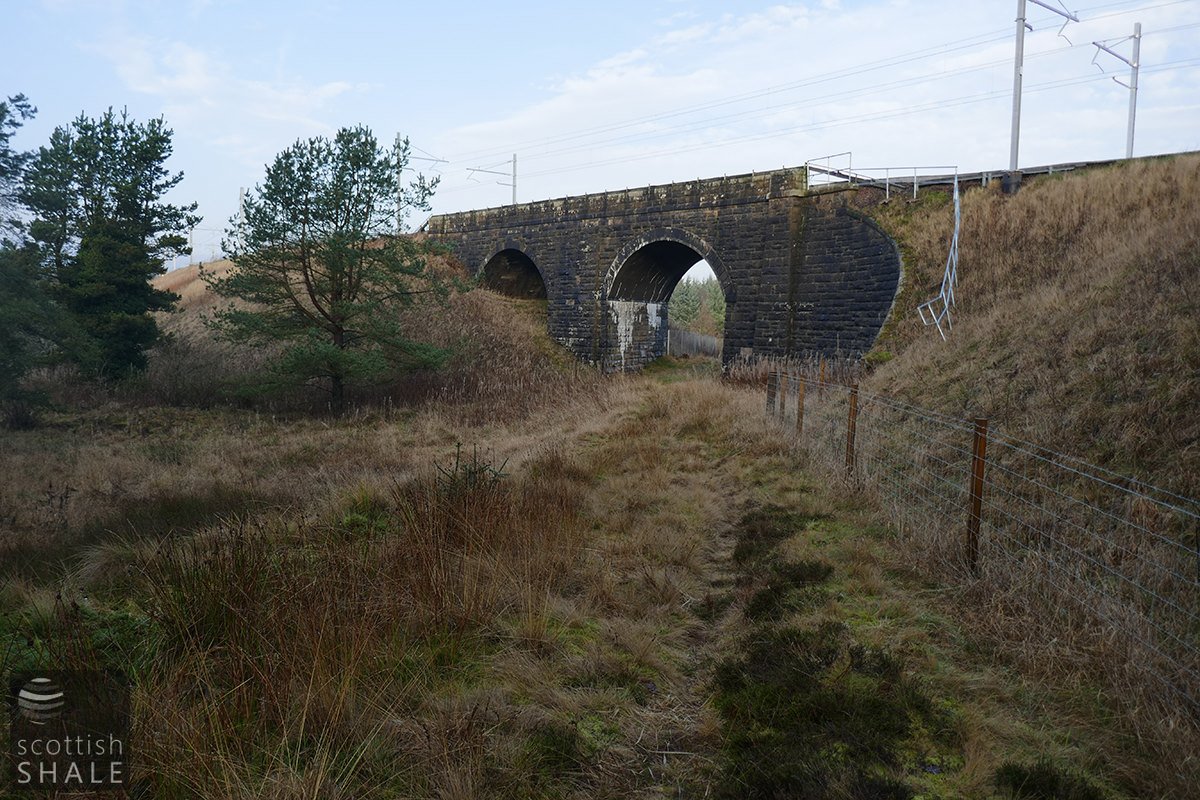 Bridge beneath the Caledonian railway, perhaps constructed to accommodate a short-lived tramway linking the Greenfield pits with ironstone mines of Muldron. 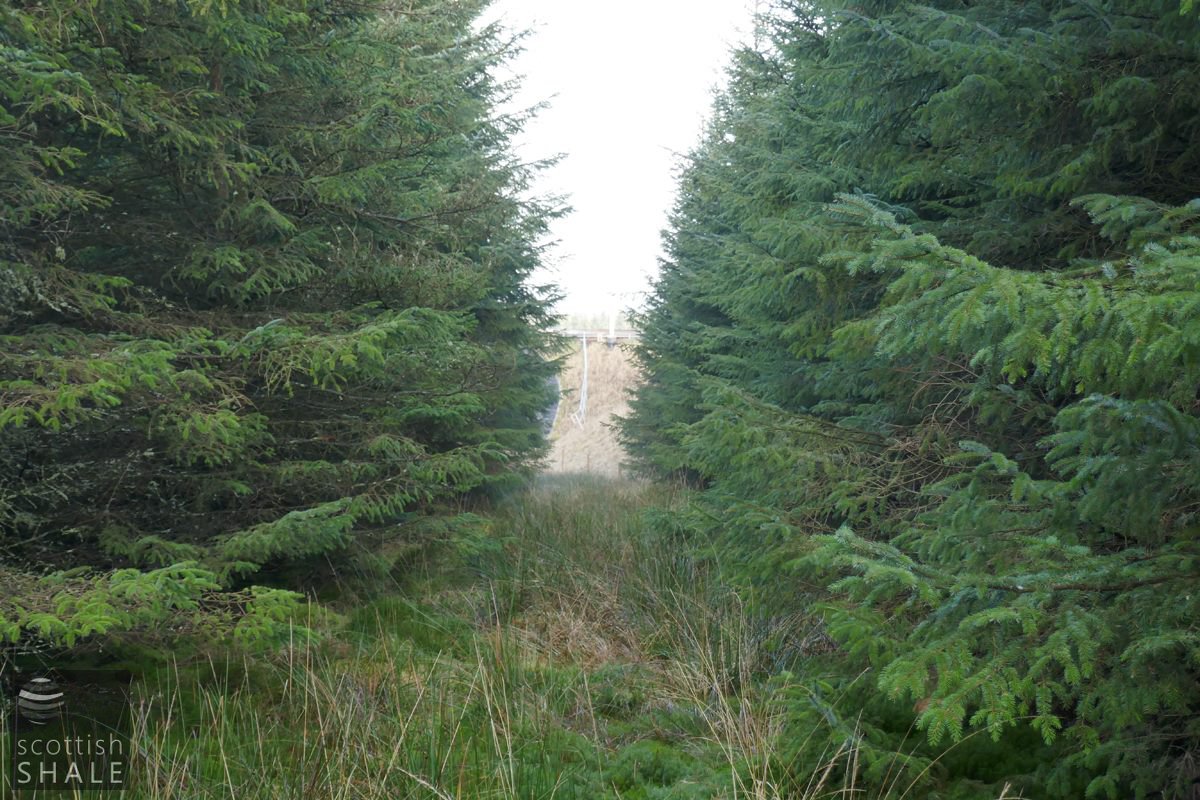 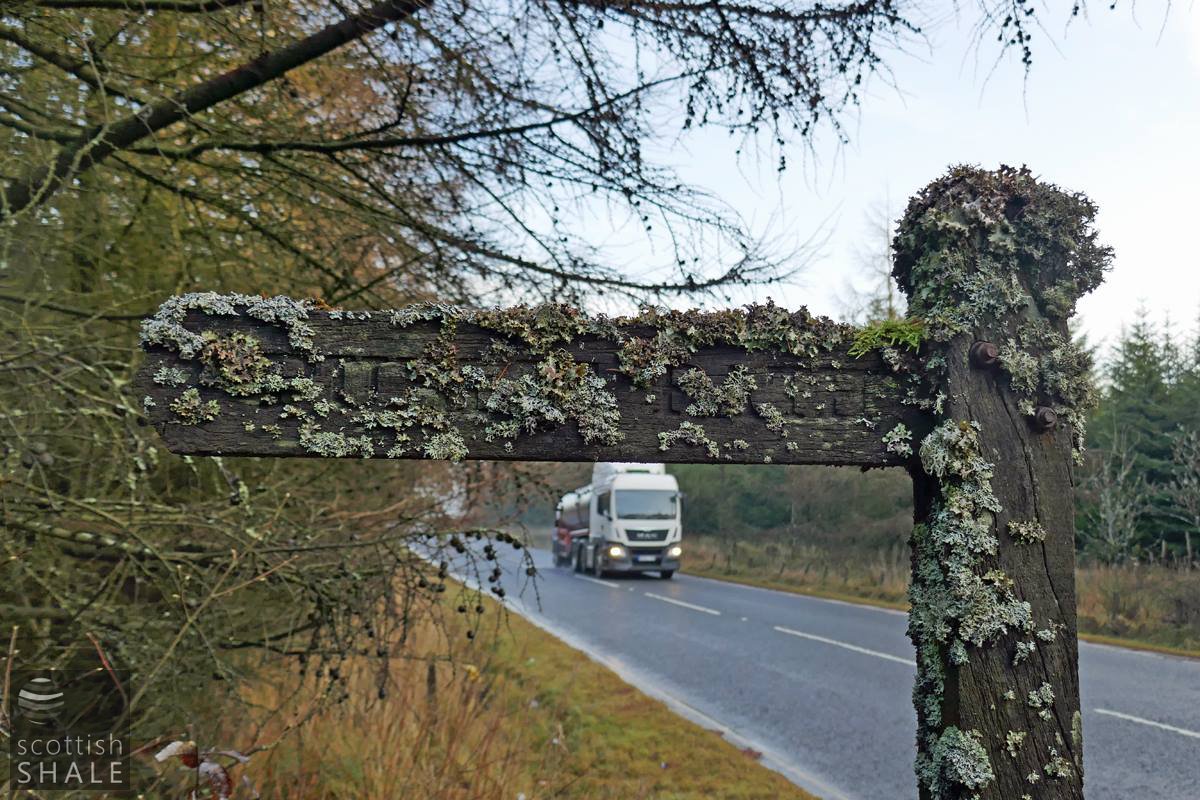 For many years a footpath followed the route of the short-lived tramway from Bridgend (near Greenburn) to old ironstone workings high on the moors near Muldron. This optimistic signpost is sited where the route crosses the A71 . Sadly the route is now almost impassable in both uphill and downhill directions due to waterlogged ground, overhanging trees and many other obstacles.