Halloween in the Capputhall Bogs

A haunted corner near Drumcross 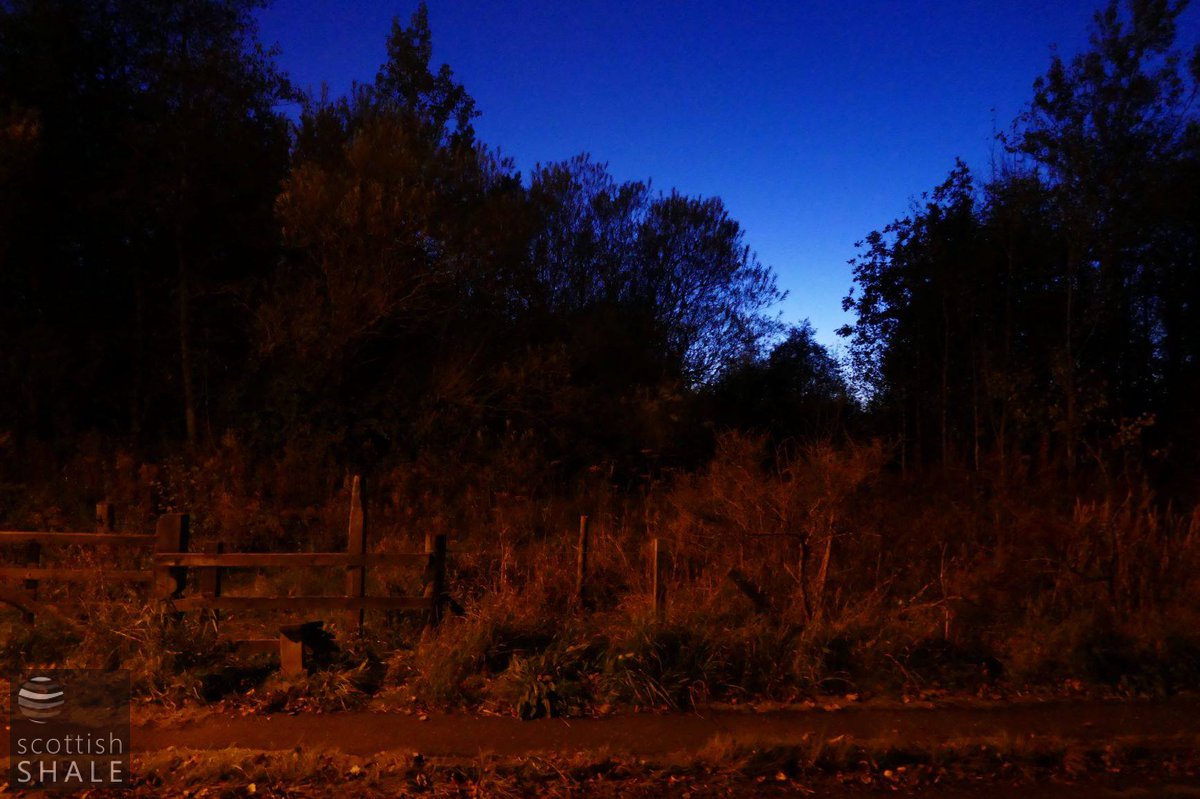 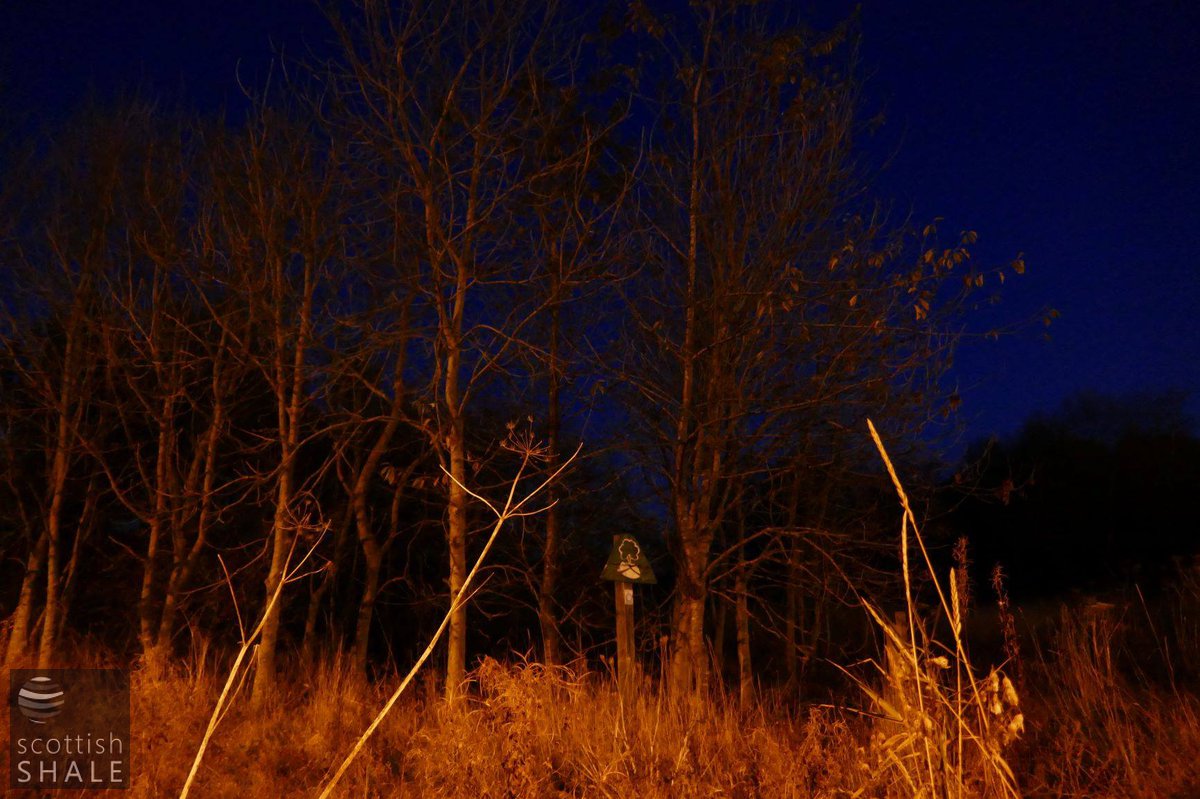 Into the shadows at Caputhall.

Those travelling on the old coach road between Boghall and Dechmont were forced to pass through a bleak stretch of sodden and uncultivated lands known as the Caputhall Bogs. This wasteland was a cheerless place without tree, bush, or cottage to provide shelter from the wind and rain. On dark nights, the unwary risked slipping into the Bog Burn that ran alongside of the road. Caputhall Bogs was a forlorn place of evil reputation, which through the years was scene of many strange and unexplained occurrences. Many thought that the lands were haunted. 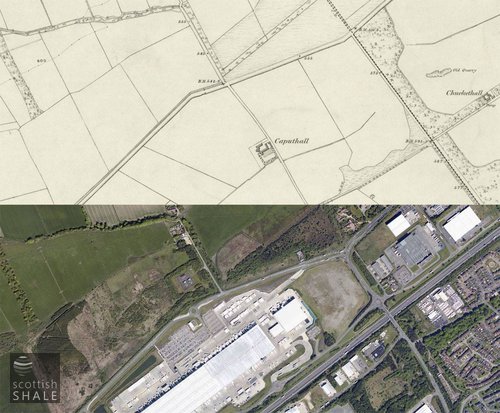 In 1882, James Forrest, local writer and storekeeper at the Uphall oil works, published an account of his Halloween encounter in the Caputhall Bogs, many years previously. He tells how he and two friends “in high spirits.. and in the pride and flush of manhood” had merrily set off to defy local legend and play games and the “cantrips peculiar to Halloween night”, in the Caputhall Bogs, “where the lands of three lairds meet”.

Forrest wrote; “The clock chimes four in the morning and impenetrable darkness broods over the earth as we plod eastward towards that dreary stretch of uncultivated land known as Caputhall Bogs….The moon was on the wane and a thin white mist filled the air, which seemed to have the effect of magnifying objects and giving them a weird appearance”. The group had first stopped off at the old kirkyard at Kirkton where they had climbed over the wall and threw the “worsted clue” amongst the gravestones; a Halloween tradition that seems to have involved unwinding a ball of wool. Something suddenly broke the happy mood of the moment and unnerved them. They hurriedly scrambled back over the wall and ran towards Caputhall before bursting into a nervous laughter. When they reached the Bog Burn they scrambled down the bank to fulfil another Halloween tradition; dipping their left shirt sleeve in the gurgling waters of the Bog Burn, joining hands and chanting:

“Spirits of earth, spirits of air
Come to us now, come if you dare
We have laved our sleeve in the running brook
Where oft has been mirrored the ill-omened rook!”

Forrest continued,...... “Our voices had scarcely died away when something rose up ….something tall and stately, clad in white vestments. The figure looked at our wondering eyes, stood for a moment or two motionless, then with slow and giant like strides, stalked towards the wood.”

Forrest and his friends lived to tell the tale, and was later inspired to write “The White Lady of Caputhall Bogs”, a romantic retelling of local legends, set in the time of Bonnie Prince Charlie.

Today Caputhall Bogs remains a waterlogged waste, but is now clad with stunted trees. The road from Boghall to Dechmont still follows its old course, but Caputhall farm now lies somewhere beneath the warehouses of the Tesco distribution depot. Despite the passing traffic and the constant activity within the massive white sheds of the depot, the area retains a sense of bleakness and isolation. On a cold autumn night, just a few paces outside the yellow glare of the streetlights, it’s easy to imagine that the spirit of the white lady still waits there, silent among the shadows. 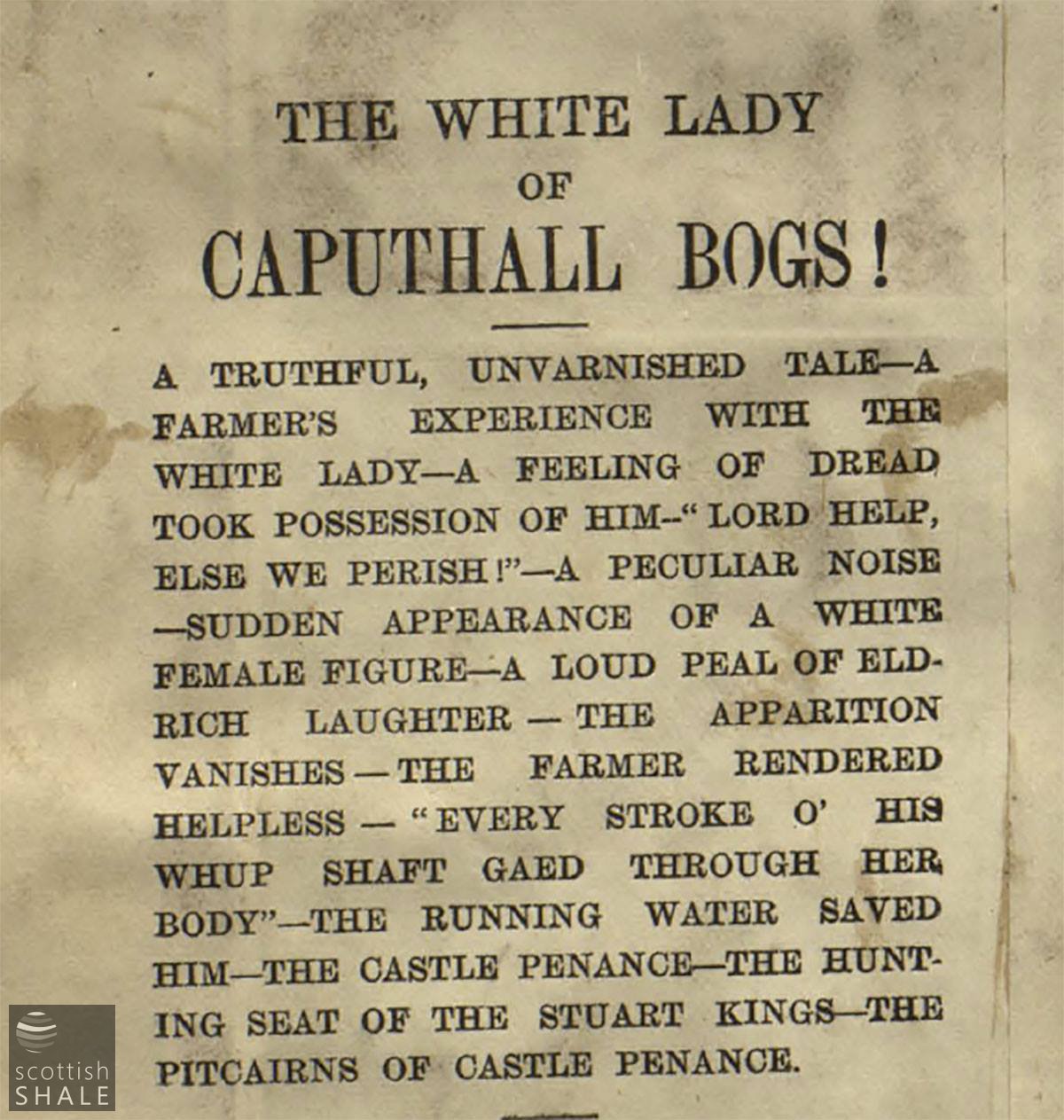 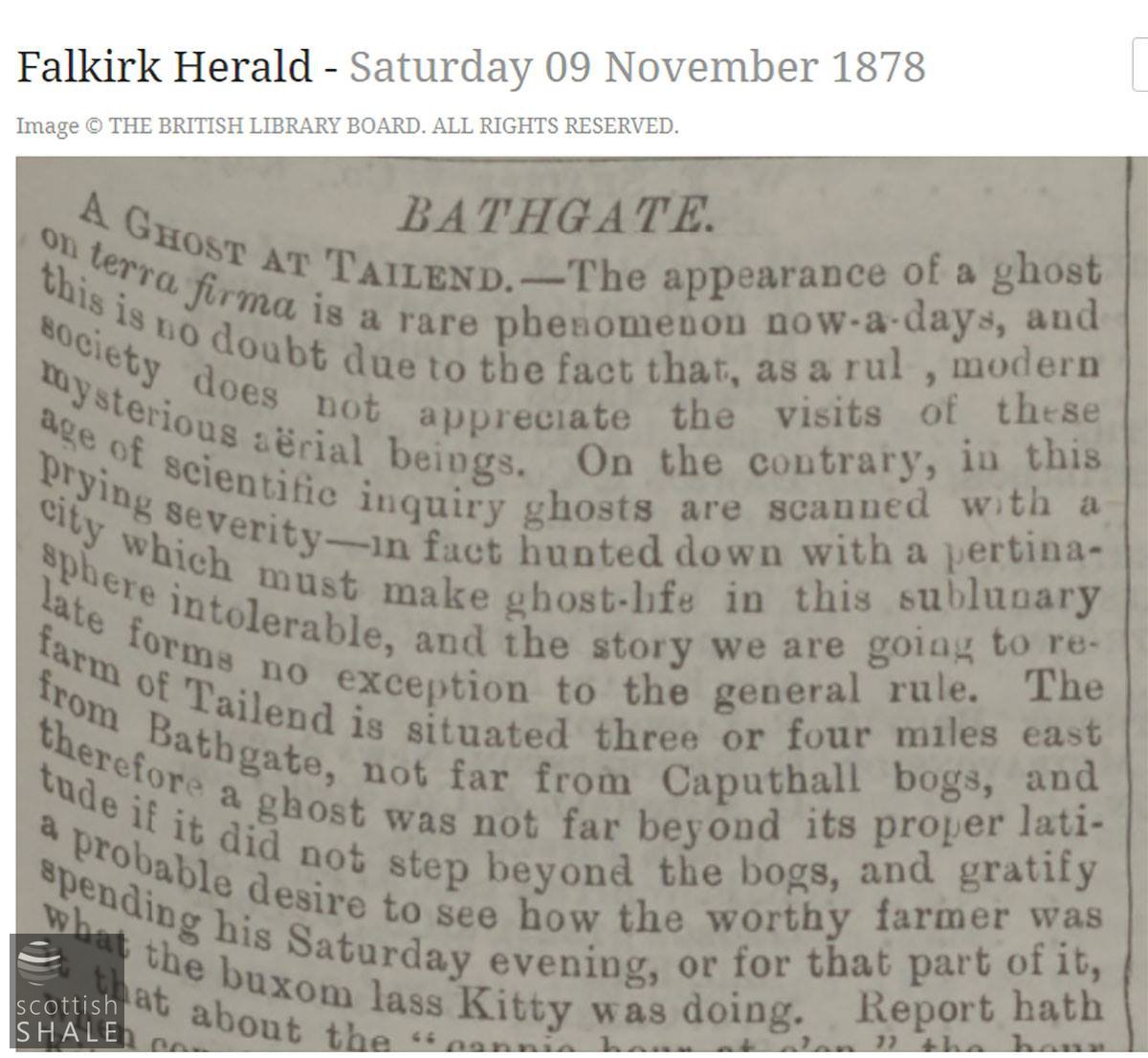 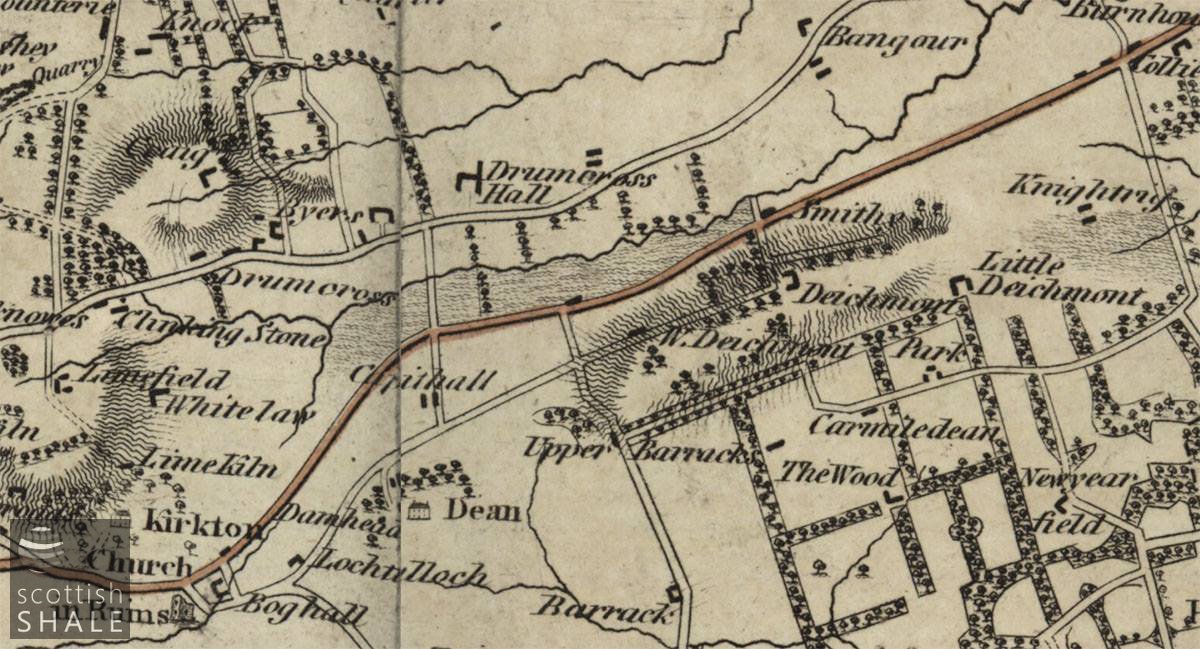 Kirkwood's map of 1817, showing the area of wasteland to the north of the road. Courtesy National Library of Scotland. 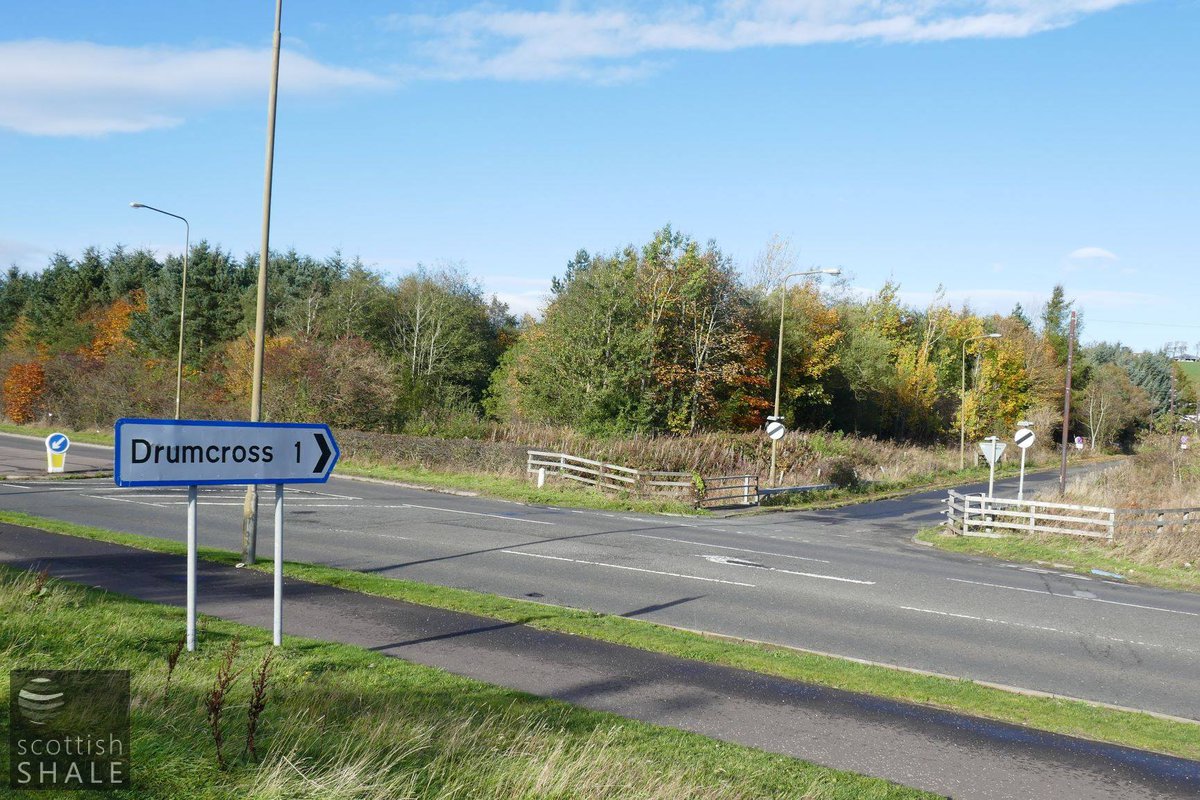 In daylight - the Bog Burn still flows beside the road. 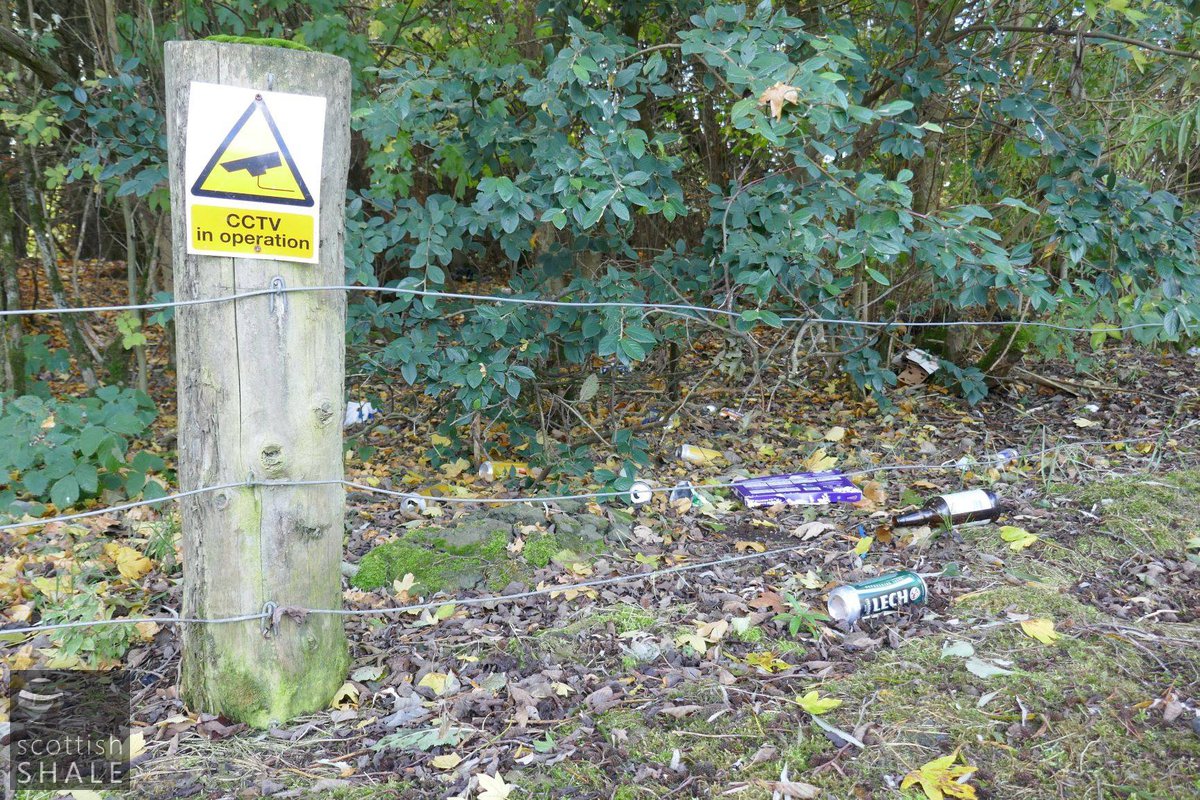 Odd things still happen in the bushes after dark.