Hounds, Merry-makers, and the Camps Viaduct 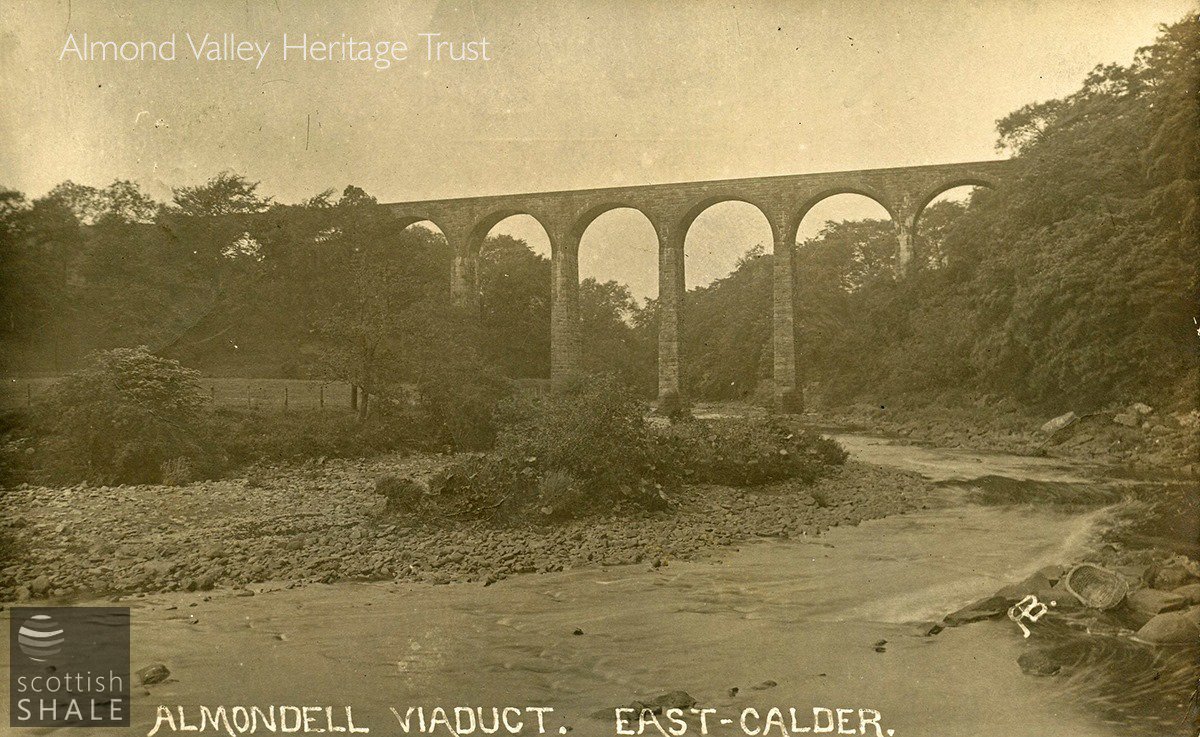 A clear view of the viaduct, before any sort of railing was fitted and prior to growth of trees. A Robert Braid postcard from the first decade of the 20th century. 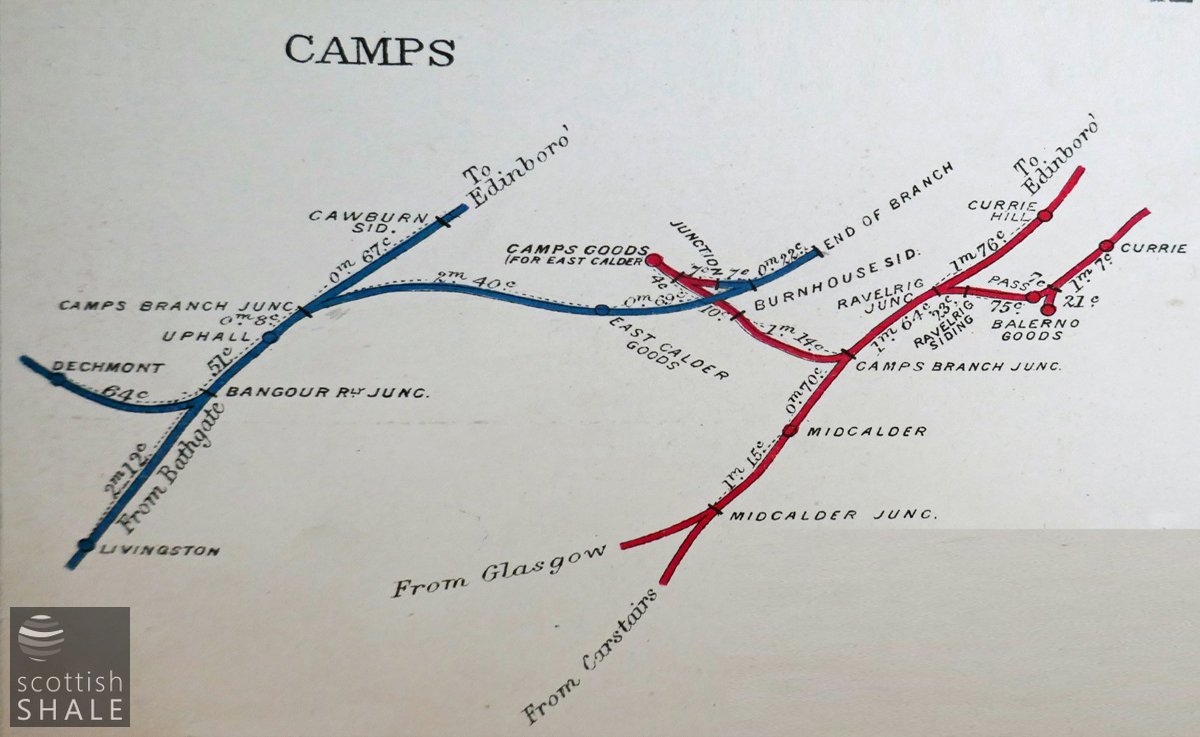 Railway Clearing House diagram - not to scale, showing the link between the North British Railway (blue) and the Caledonian Railway (red). c.1920. 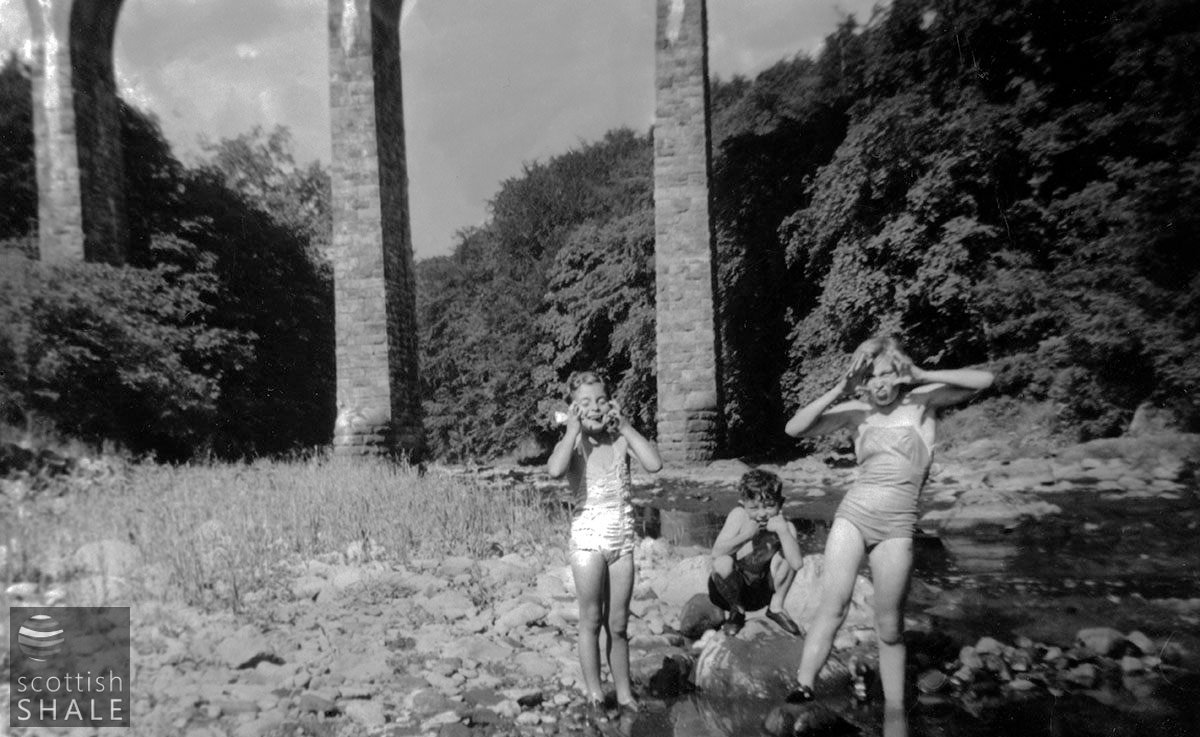 Evelyn, Dave, and Maureen Newton enjoy the river beneath the viaduct. c.1952. 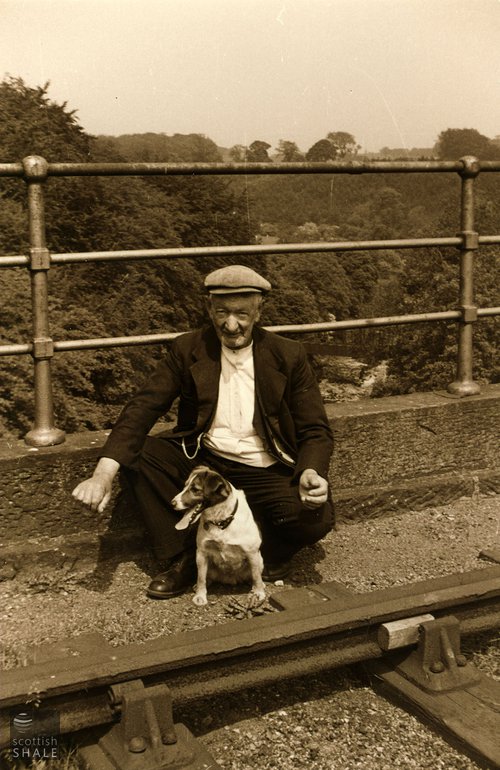 The nine arches and slender stone piers of the Camps Viaduct once carried a single track of railway across River Almond at a height of 75 feet. Now within Almondell and Calderwood Country Park, the elegant viaduct is a familiar and much loved local landmark, and carries a handy footpath between Uphall Station and East Calder. Like many other tall and perilous structures however, it has been the scene of various accidents and tragedies.

The Camps Branch of the North British railway was completed in 1867, running from Uphall station, through the lands of Pumpherston before crossing the Almond to reach a point “near the kilns of East Camps lime works belonging to William Torrance”; a distance of about two and a half miles. It might seem that construction of the railway and costly viaduct represented a large investment compared with the modest revenue to be earned from the transport of limestone from East Calder to the ironworks of the west. The project however was probably considered of tactical value in preventing the rival Caledonian Railway from invading North British territory. While the North British Railway were constructing their Camps branch, the Caledonian Railway built their own mile-long branch to the Camps limeworks. Later these two branches were linked to provide a continuous route between the North British line from Edinburgh to Glasgow via Bathgate, and the Caledonian's Edinburgh to Glasgow via Shotts line.

The Pumpherston Oil Company constructed their oil works beside the N.B. Camps branch during the early 1880's, bringing new traffic to the quiet branch line. Early in the 20th century much of the crude oil produced at the Tarbrax oil works was transported northward across the viaduct to reach Pumpherston refinery. During the 1940's and 50's. the crude oil from the new Westwood works in West Calder will have followed the same route. With the decline of the shale oil industry however, the southern part of the Camps branch across the viaduct was closed in 1959, while the northern section between Uphall station and Pumpherston refinery continued to carry traffic until 1981.

The gradient of the Camps branch fell towards the viaduct on both sides. On 13th of February 1880, a train of 16 wagons loaded with limestone, plus a brakevan, was approaching the bridge from the south when the axle of one of the wagons broke, and the rear vehicles of the train, including the brakevan, were derailed. These continued down the track for 90 yards before being precipitated off the western side of viaduct, crashing into the river and “being entirely broken up”. Within the van were the guard William Turner, his assistant, William Craigie. and 15 year-old Thomas Bishop, a ticket collector, who was delivering a telegraph message. All were said to have been killed immediately. The Board of Trade enquiry noted that the parapets of the bridge were only one foot high and did little to impede the train. It was recommended that a no high viaduct should be constructed without a substantial parapet, however our postcard image of the bridge, taken in about 1910, shows that no extended parapet, or any form of railing, had been fitted to the Camps viaduct at that time.

Only a few slow moving freight trains will have passed along the Camps branch each day, their speed across the viaduct being restricted to 15mph, with other parts of the route limited to 5mph due to mining subsidence. It seems to have been accepted that the line served as a public footpath, used regularly by East Calder folk employed at Pumpherston oil works. The absence of a railing on the viaduct was particularly challenging when worse for drink. In 1898, William Keattings was fortunate to suffer no more than a broken thigh when falling 40 feet from the viaduct after a bevvy session in East Calder. Three years later, the body of an unnamed “tramp labourer” was discovered, having fallen 70 feet from the viaduct.

For many years the Linlithgowshire and Stirlingshire hunt had free rein to charge around the county in pursuit of the fox. In January 1909, it was reported that “four couples of the best hounds were literally dashed to pieces” when they leapt from the parapets of the Camps viaduct.

A particularly tragic incident occurred as recently as 1951. Nineteen year old William Mulholland from East Calder, a professional photographer, had spent the afternoon taking landscape photographs in the vicinity of the viaduct. On his way home, he was struck and killed by a goods train which he failed to hear as he was profoundly deaf.

The derelict Camps viaduct, a B-listed structure, was restored in the 1980's and ownership passed to West Lothian Council. Within the last few years, the Council have funded considerable further work to ensure that the viaduct remains as a monument and a useful footpath route for generations to come.

Above image: Pumpherston man Dave Spat, and dog, pictured on the viaduct in 1957. 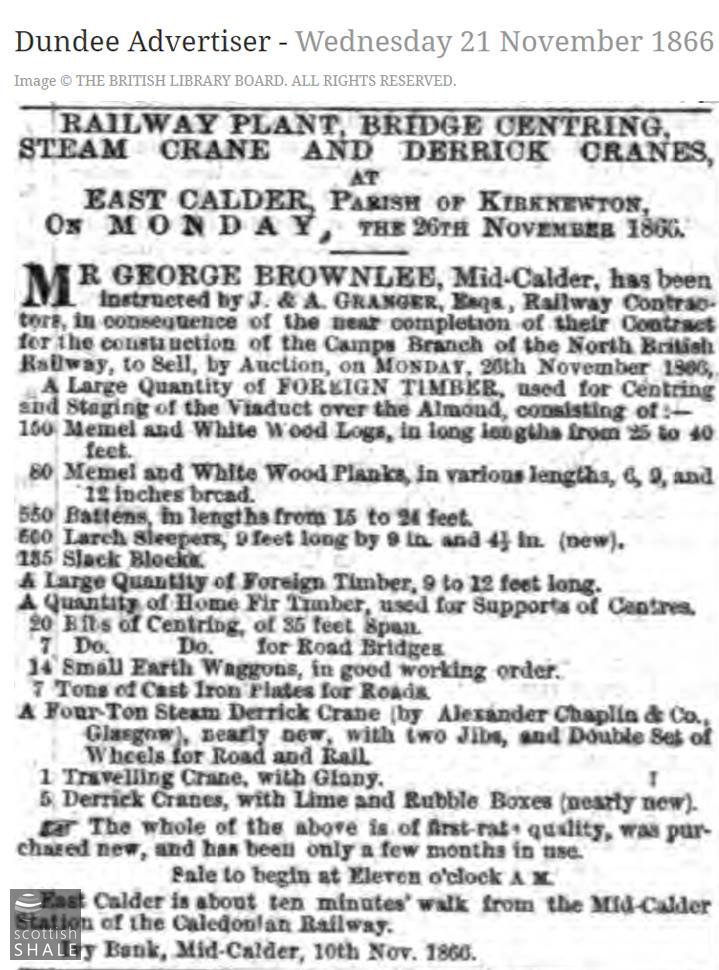 The sale of contractor's plant provides a good impression of how the viaduct was built. A huge amount of timber was needed to provide scaffolding and formwork against which the stones of the arches were laid. 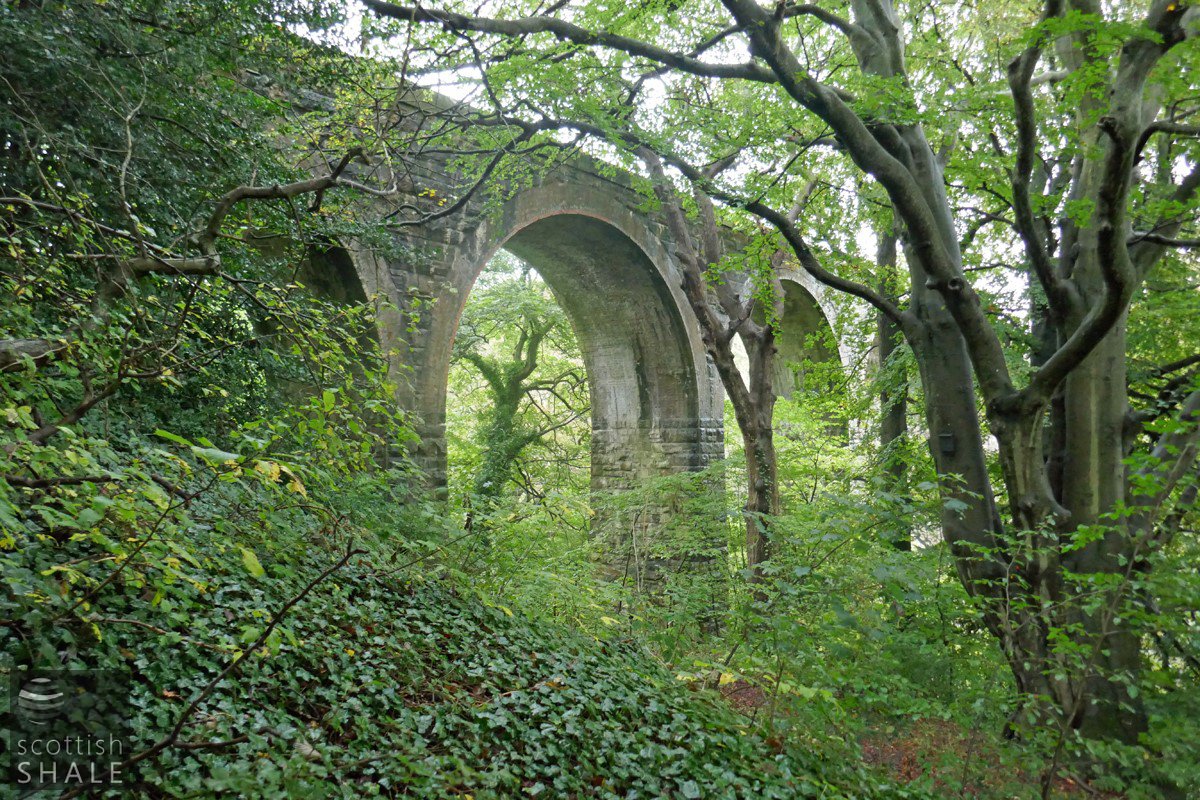 A peek through the trees. 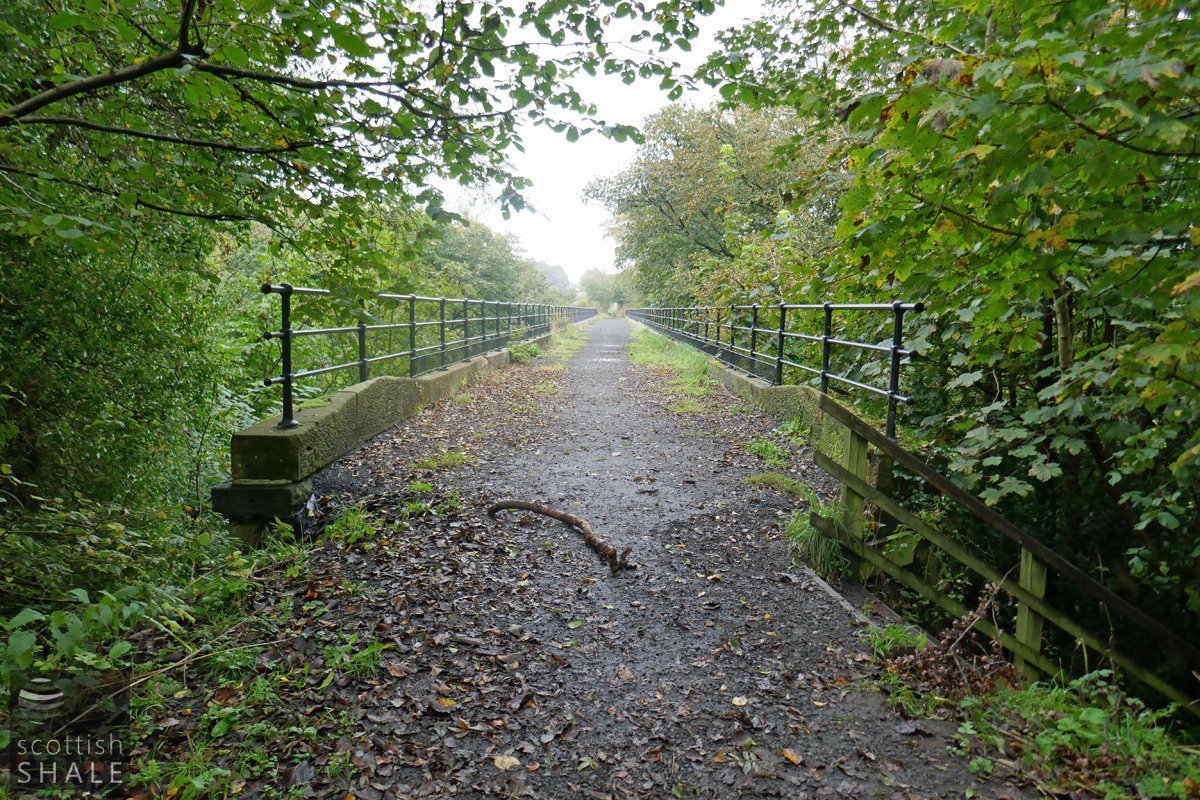 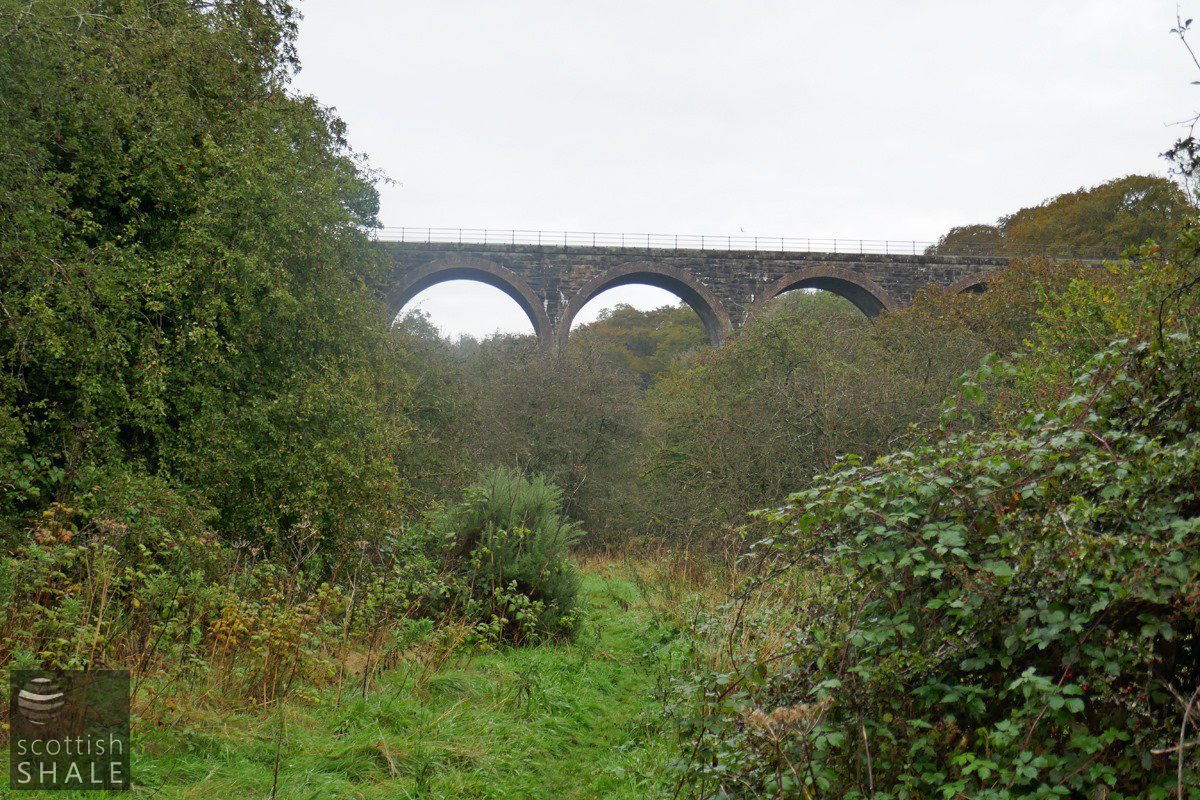 Growth of woodland means that it is now difficult to get a clear view of the viaduct.