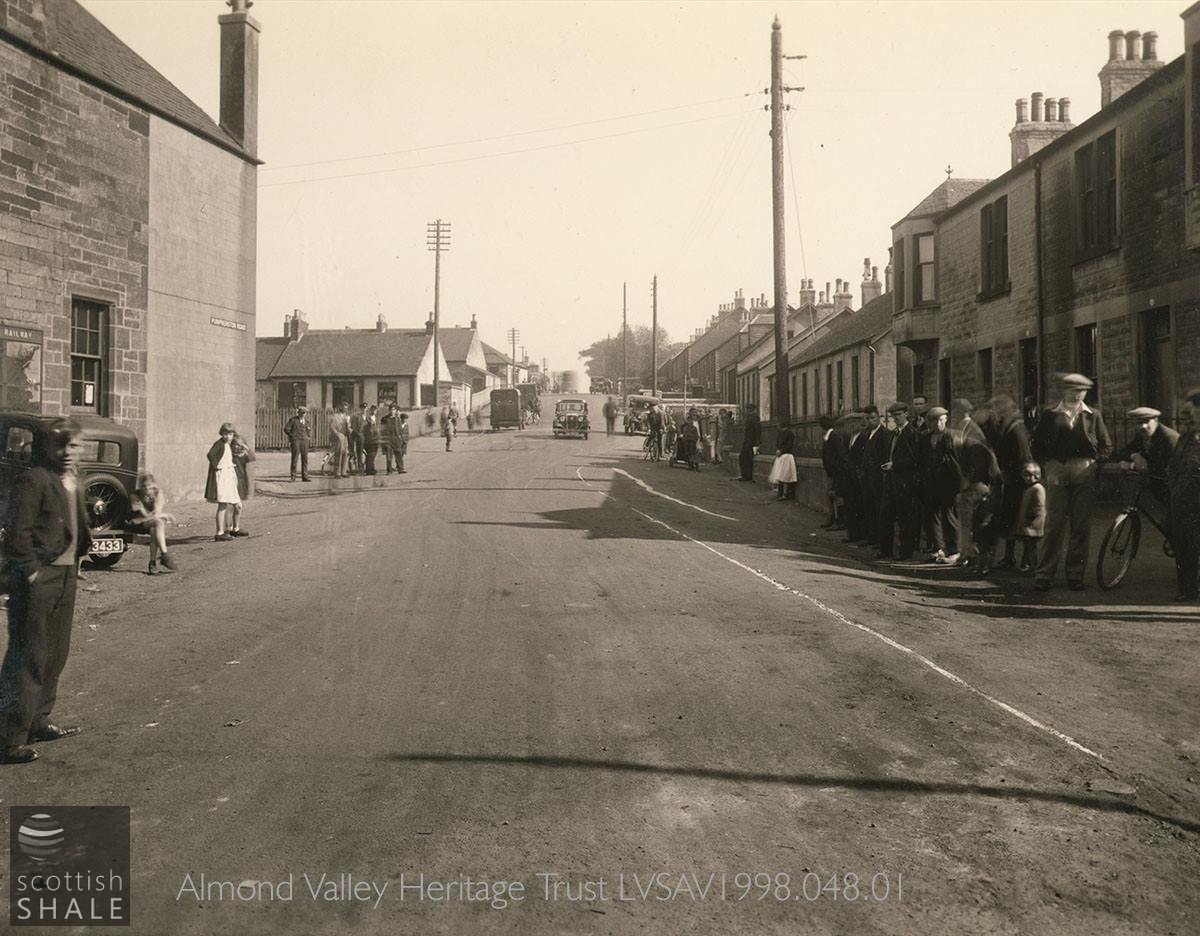 Folks on the street in the aftermath of the crash - it seems that the route of the tanker has been marked out in chalk. 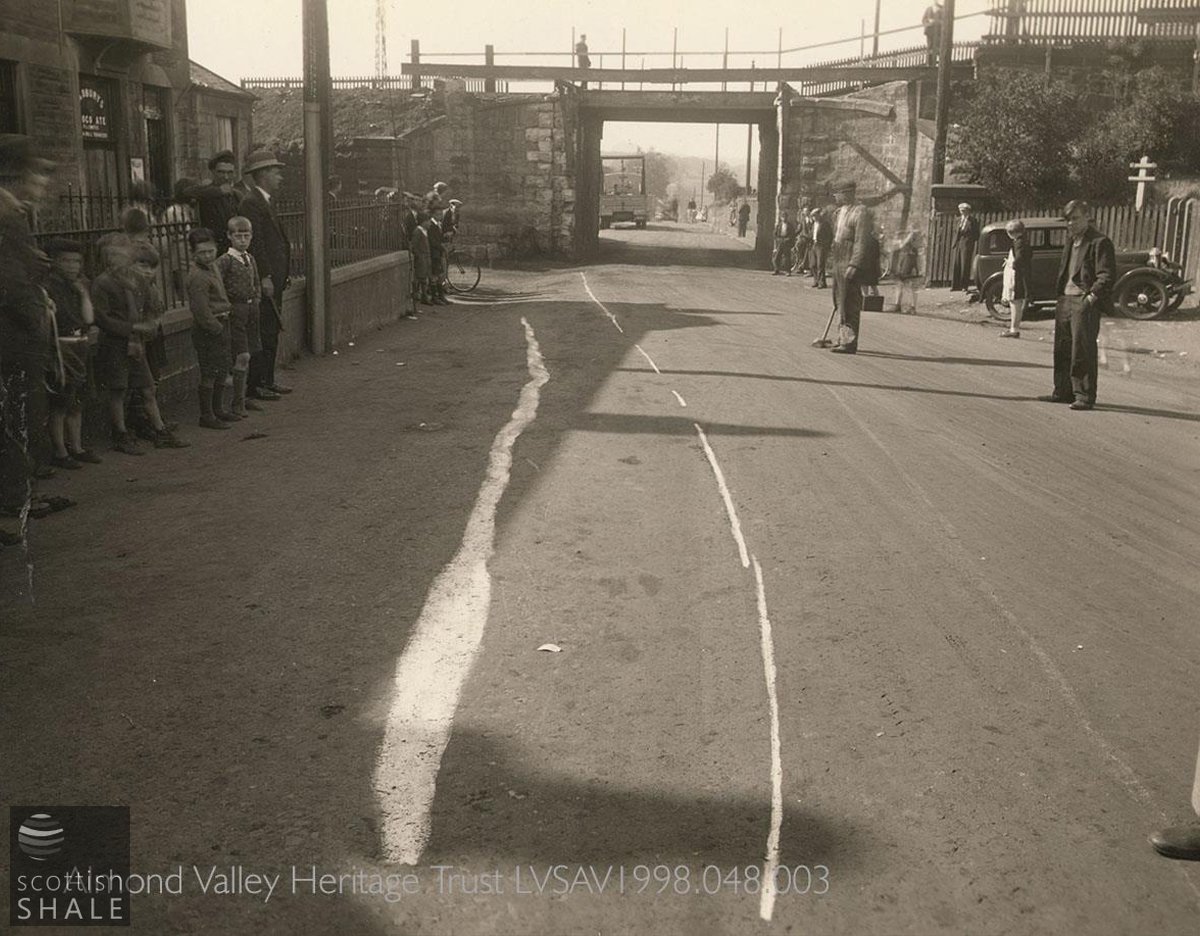 The aftermath of the crash, once the wreckage had been removed. The chalk line marks the route of the tanker.

In 1934 it seemed that Scotland's shale oil industry faced a bright future. A new cracking plant had recently been installed at Scottish Oil's Pumpherston refinery enabling much of the crude shale oil to be converted to petrol and diesel fuels. A lower rate of tax was paid on these home-produced “Scotch” road fuels, enabling them to compete effectively against imported products. The newly completed A8 trunk road ran just over a mile from Pumpherston refinery, allowing its oil products to be easily distributed to the main centres of Scotland using a fleet of new tanker lorries.

On the 12th June 1934, a driver and his assistant set off from Pumpherston refinery in a 55hp Scammell truck loaded with 2,500 gallons of petrol. It was destined for the Scottish Oils and Shell Mex depot in Airdrie. Michael Scott, aged 31, was an experienced driver from Glasgow who lodged at Shrine Place in Broxburn, His mate, James Smith, was 18 years old and lived in Mid Street, Broxburn. He was a talented footballer and the previous evening had played for his team; Westerton Star. 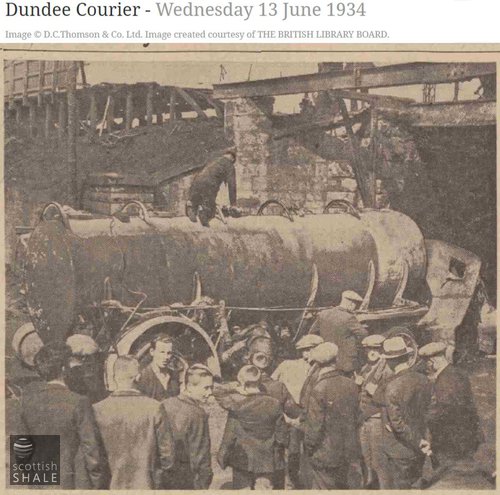 Turning right at the end of Drumshoreland road, the tanker headed to Uphall Station, along a road lined on either side with cottages and villas. Low gear was engaged prior to descending the long straight hill that continued from the entrance to Beechwood cottages, through a narrow bridge beneath the Edinburgh to Bathgate railway bridge at Uphall Station, then past the dilapidated houses of “Randy Rows” before climbing slightly to meet the A8 trunk road. Travelling at ten miles an hour, James exchanged a wave with a young girl that he recognised on the pavement. She was to be the only person to witness the full tragedy to come.

When about 100 yards from the railway overbridge the tanker lurched suddenly to the left. Michael Scott tried desperately to apply the brakes and correct the steering but could do nothing to prevent the lorry's inexorable progress towards the stone abutments of the railway bridge.

When the tanker hit the unyielding stonework, the first of five compartments of the oil tank ruptured, and the lids of the other four were forced open. There was an immediate explosion and a plume of flame that rose high into the air. Windows were shattered and the folk of Uphall Station ran into the street to witness the unfolding horror. The intense heat made it impossible to approach the inferno or render assistance. The wooden parts of the railway bridge were soon ablaze, with fire threatening to spread to the post office and nearby houses.

Michael Scott had been thrown clear of his cab by the impact of the crash, and was seen to stagger a distance and stumble, then continued to make similar pathetic progress with his clothes aflame. Eventually he was pulled to safety and the burning clothes ripped from him. He was later conveyed to the Royal Infirmary suffering from severe burns. The charred remains of young James Smith were only recovered once the fire had been extinguished. It was evident that he had been trapped between the crushed cab and the walls of the bridge. A coffin containing his remains was borne through the streets before being taken to his parent's house. A plaque to his memory, funded mainly by donations from his fellow team-mates at Westerton Star, was unveiled at a memorial service.

An accident enquiry later revealed that the front axle of the lorry had broken due to a flaw in the metal, making it impossible to steer, and interfering with the braking. No fault was found with the maintenance of the lorry and no blame was attached to the accident.

The low, narrow bridge beneath the railway at Uphall Station continued to pose an obstacle to traffic until 2009, when it was replaced as part of the re-opening of the Edinburgh to Glasgow via Bathgate railway. 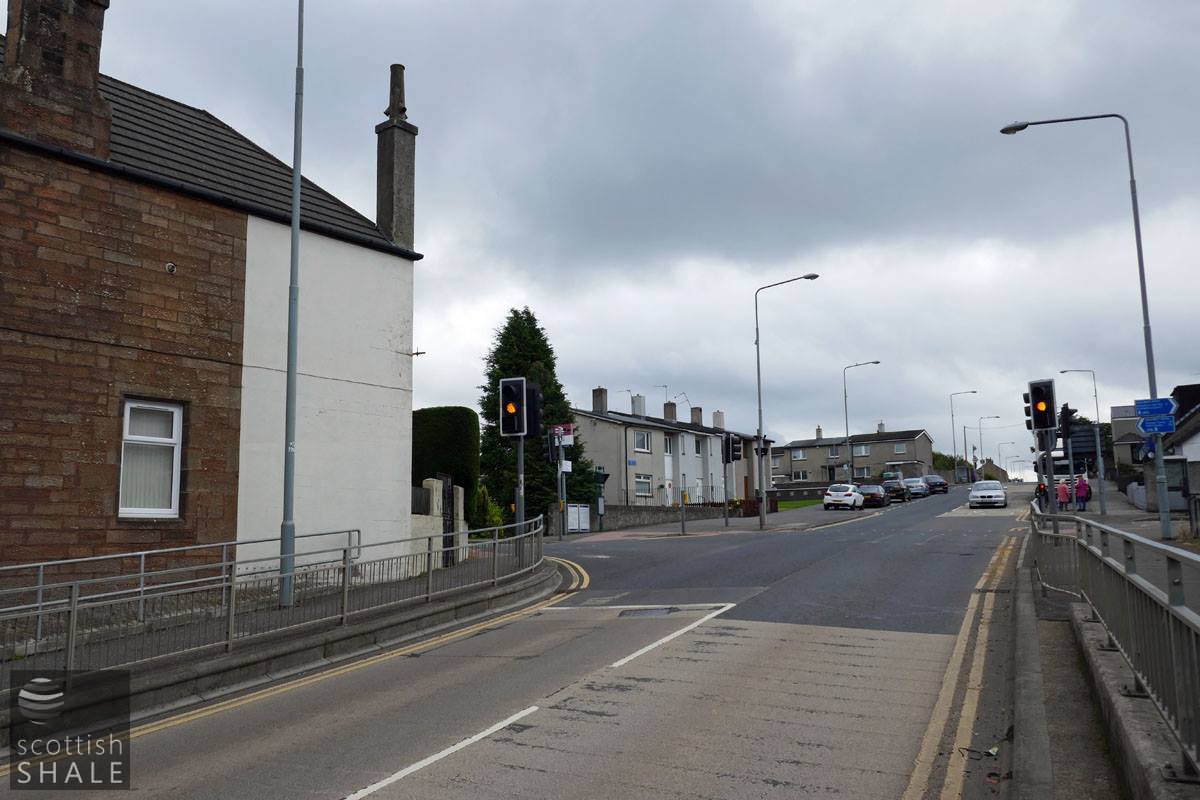 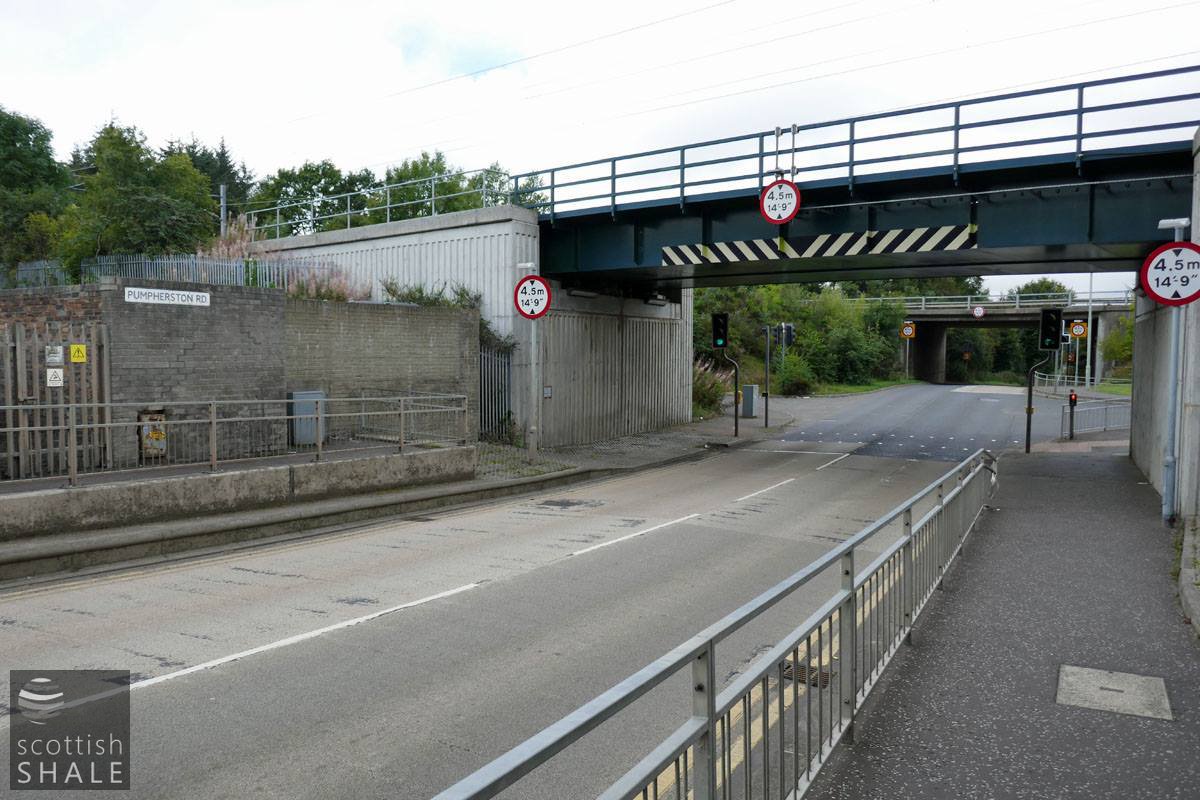 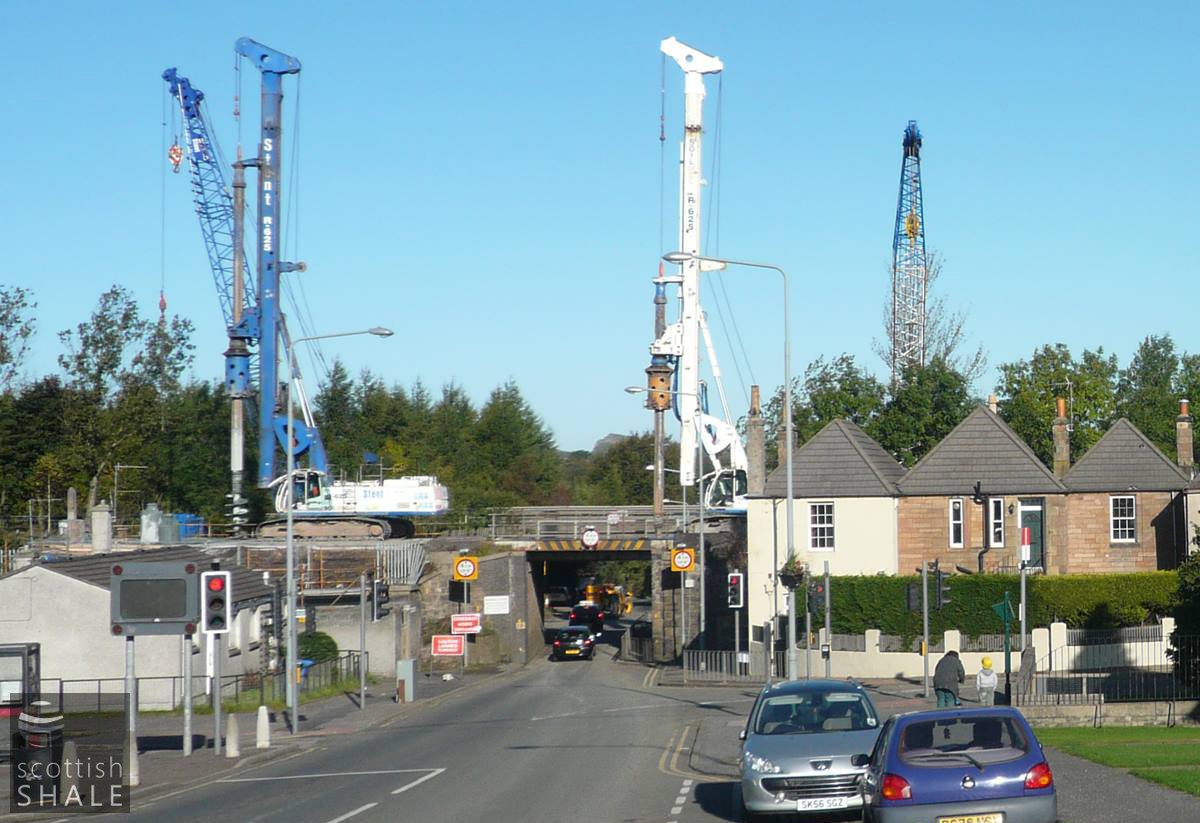 The original bridge in 2009, with work in progress to replace it. 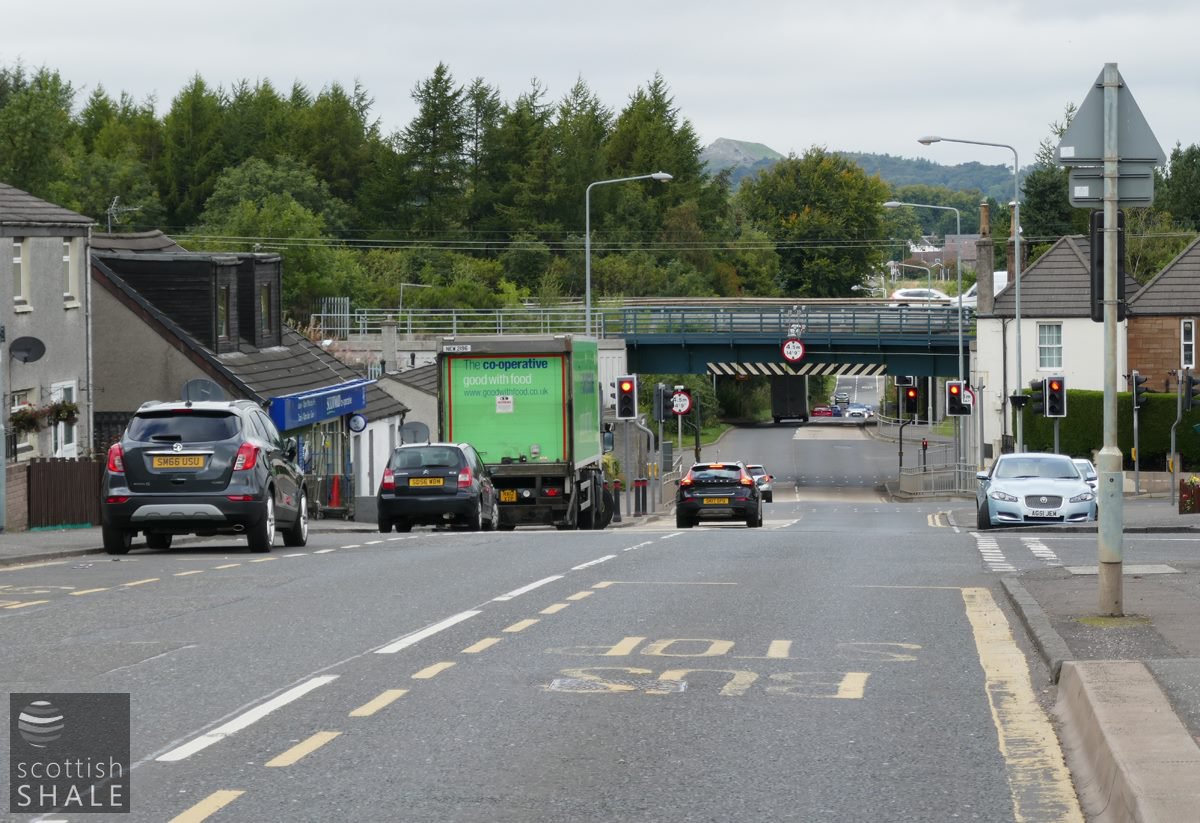 A telephoto view taken today, showing the long hill down to the Beugh burn.