Joe (and his horse) invade Pumpherston

The origins of Pumpherston's coop 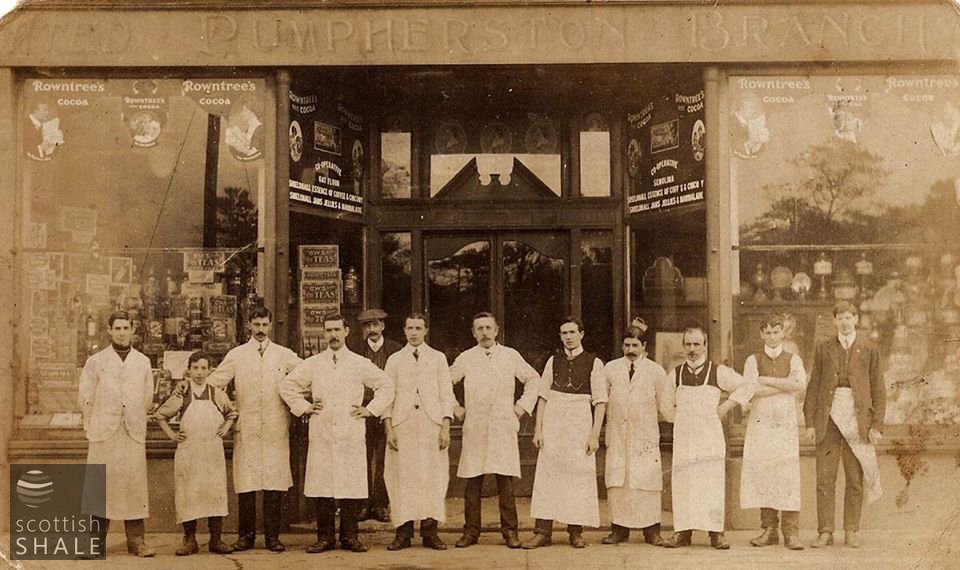 The grocery store at Pumpherston c.1905, with adverts for Rowntree's cocoa and the SCWS own-brand Shieldhall Coffee essence, jam, jellies and marmalade, and in the right hand window a fine selection of oil lamps.

In 1873, a group of shale workers formed an association to pool their resources and support their families through the hardships of strikes and depressions of trade. This association became the West Calder Cooperative Society, one of the most progressive and effective of local co-ops which, through growth and amalgamations, came to serve many of the shale-field communities.

By 1884 the society had a well established base in West Calder, and held ambitious plans to extend its network of branches and van services. The new community of Pumpherston, established to serve the recently constructed oil works, appeared ripe to share the benefits of cooperation. A co-op publication tells the story of how Joe (surname unknown) and his horse (name unknown) led the “invasion of Pumpherston”. 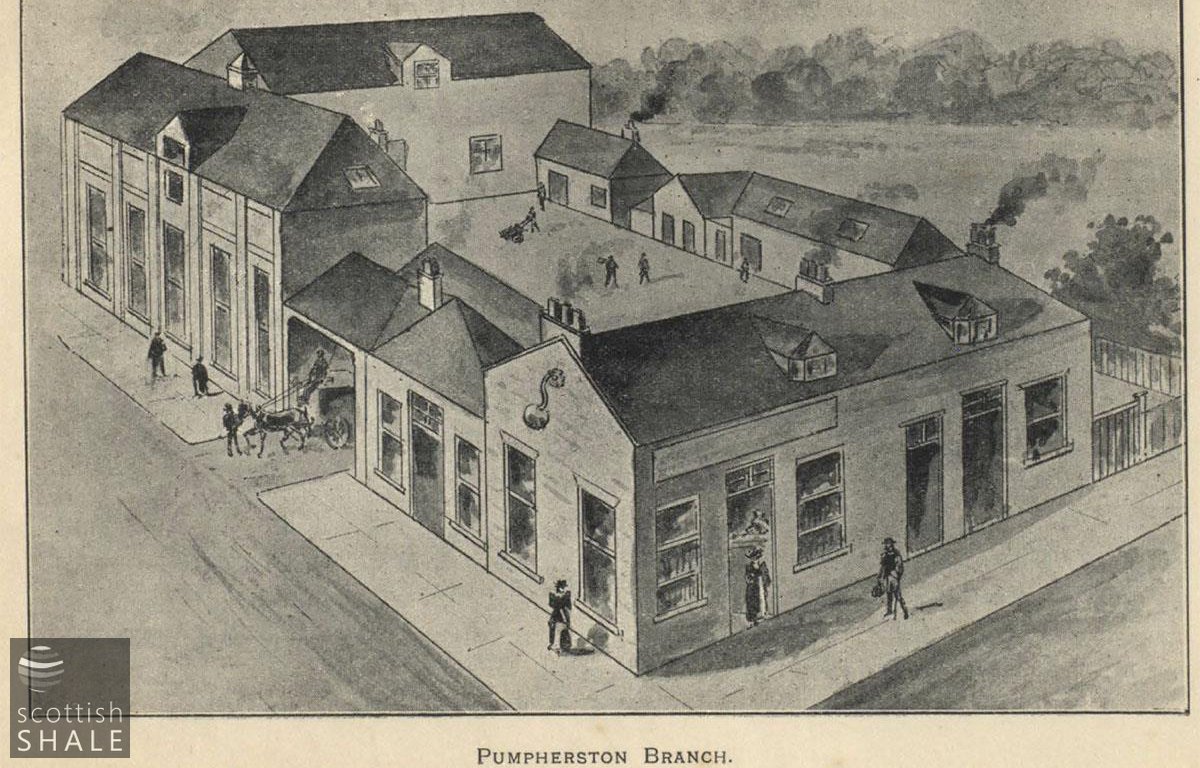 Impression of the Pumpherston coop c.1895, with the original village store in the foreground, soon to be replaced by the grand three storey building. 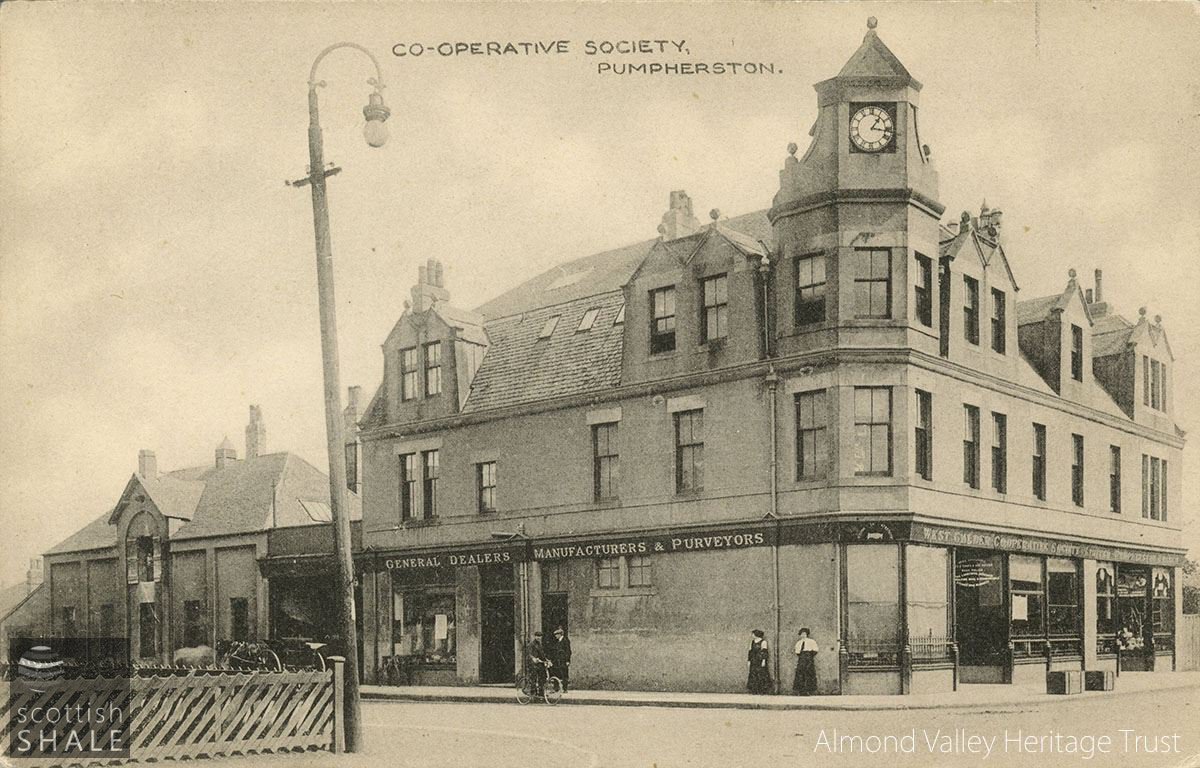 The big store, with (presumably) the stables on Drumshoreland road to the left.

Joe, as the society's senior van-man, was chosen to lead this special mission. Neatly dressed with a newly washed van, well groomed horse, and shining harness, he set off on an expedition laden with bread and groceries. Despite the support of the company secretary, only one and a half loaves of bread were sold that day, yielding an income of ten and a half pence. It was reported that on the homeward journey “the spirits of the two men were at a very low ebb, even the horse was hanging its head when it arrived home”. Despite this initial disappointment, the twice-weekly van service to Pumpherston soon became established as one of the society's most important.

The following year the society opened a modest grocery store in Midcalder which soon was well patronised by Pumpherston folk. This encouraged the society to open a store in the village and, in 1887, arrangements were made to take over the existing grocery and post office in Pumpherston, operated by James Flemington, later to become Provost of Whitburn. The co-op bought this property in 1890 and set about greatly extending it, adding a bakery, stables and an electric power plant. These were arranged around a courtyard entered though a pend from Drumshoreland road. Eight homes were constructed in “Society Place”, next to the coop buildings on Drumshoreland Road, which housed van-men, warehousemen, bakers, and their families. 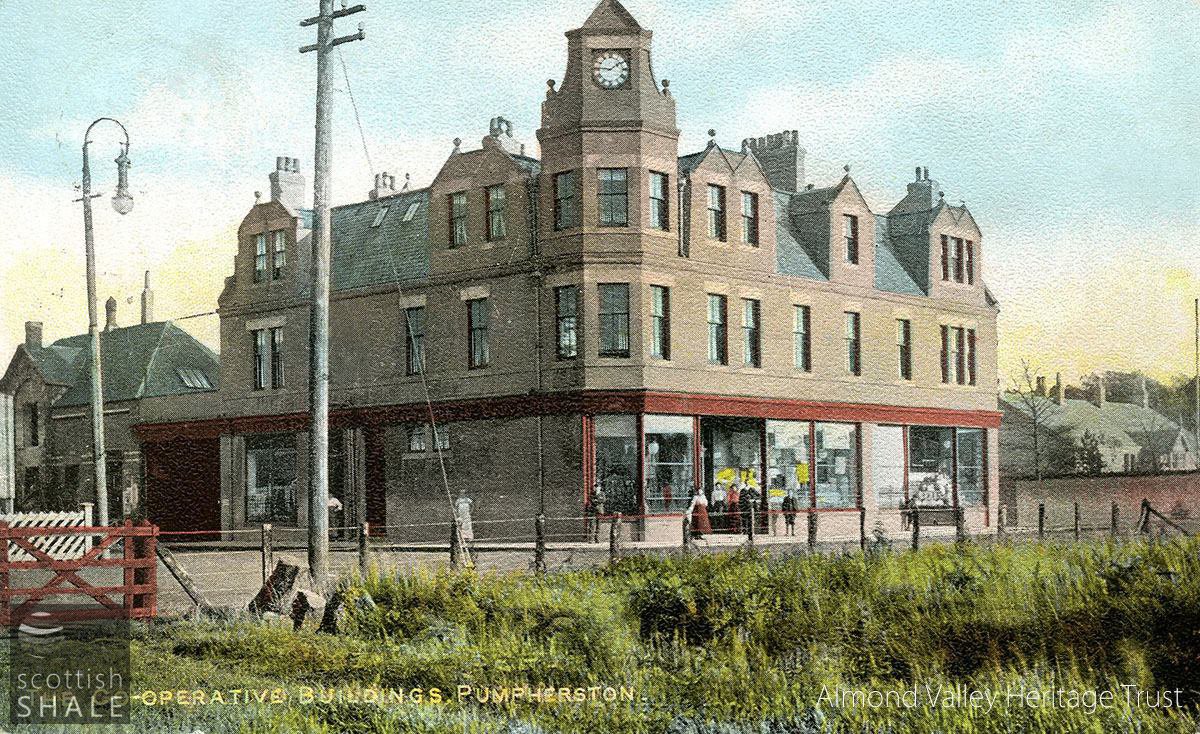 A tinted version of the view, with large electrical arc lamp, presumably powered by Co-op electricity. 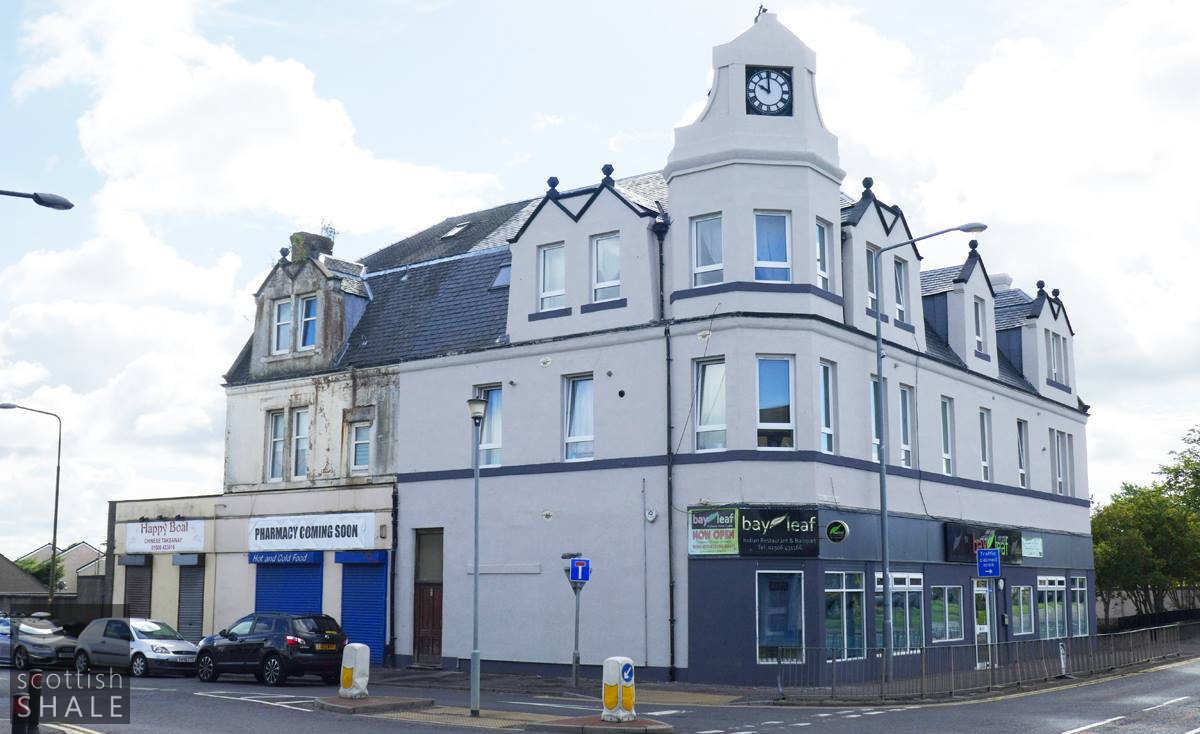 The same scene, over 110 years later.

In about 1900, the original store was cleared to make way for an imposing three storey building with clock-tower, second only to the society's headquarters in West Calder. A butcher's shop faced onto Drumshoreland road, while the frontage onto Uphall Station road contained a draper's, shoemakers, ironmongery and home goods store, and (at the end nearest to Midcalder), a grocer's. A further eight homes were added to Society Place.

Further major expansion took place in 1924 when a large modern bakery was constructed across the street from the main shop.

For many years, the co-op was centre of life in Pumpherston, serving the material needs of the community and underpinning much of its social life through bodies such as the cooperative women's guild, and other activities of the coop education committee. All profit was returned back to the working folk who were its members as the annual “divi”.

Changing habits and styles of retailing, particularly the spread of self-service stores in the late 1950's, saw decline of over-the-counter stores, and the gradual amalgamation of local co-op societies. In Pumpherston, the co-op responded by converting the two storey bakery building into Krazy Kuts; a modern but basic self-service supermarket which briefly proved very popular with residents of Craigshill and other early parts of Livingston new town, and bargain-hunters from throughout the district. However the opening of Craigshill mall and the new supermarket in Livingston regional centre soon undermined this business. The Pumpherston store closed in about 1982.

Today the clock on corner of Drumshoreland road still tells the correct time, the main coop building now houses a fine Indian restaurant and, across the road, the old bakery building houses a number of shops and businesses. It's particular good to note that Scotmid - successor to Scotland's cooperative societies - continues to serve the folk of Pumpherston in the 1960's-built village store on Drumshoreland road. 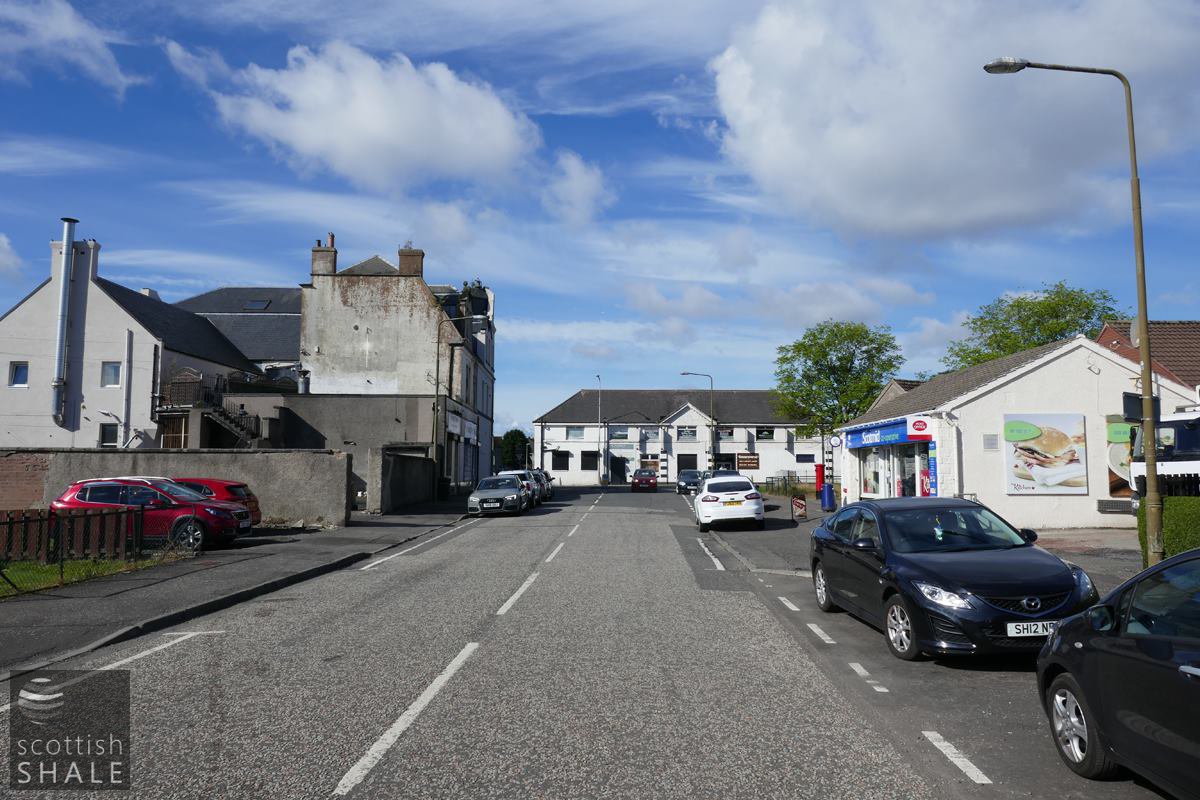 Drumshoreland road looking west, with the main store on the left, the 1920's bakery across the road, and the current Scotmid store on the right. 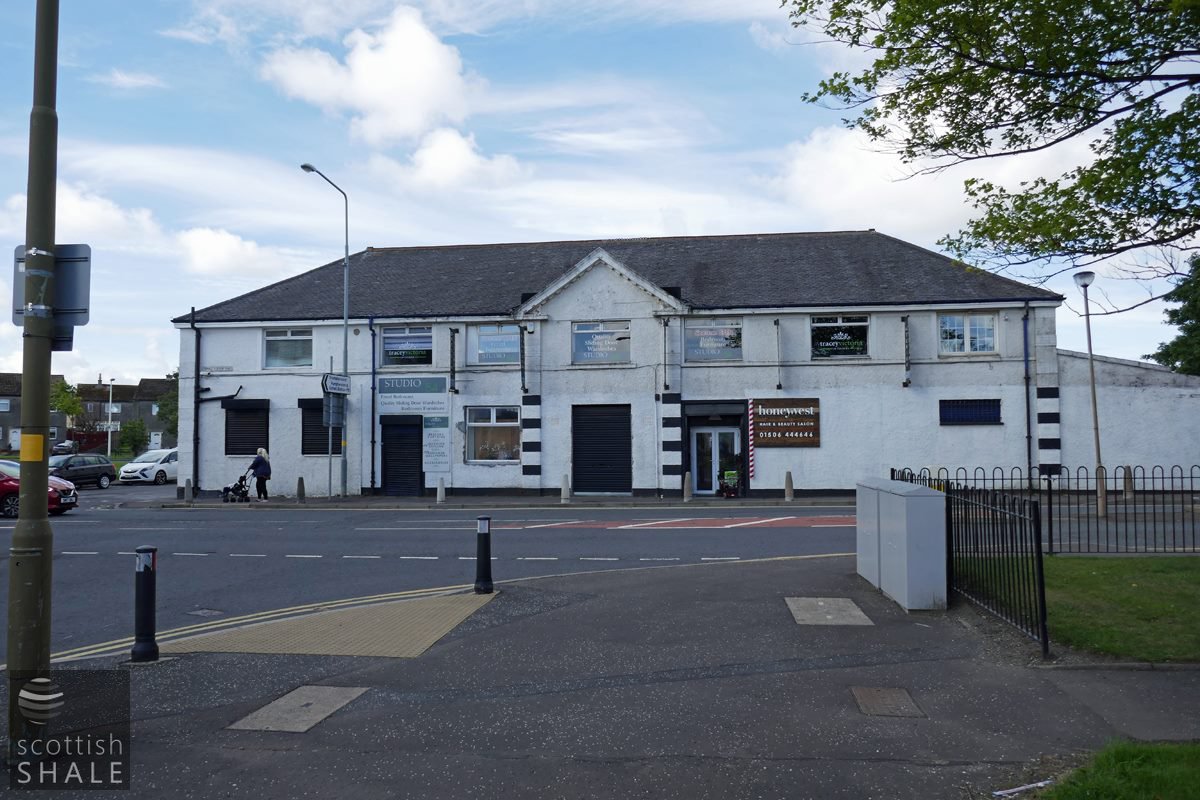 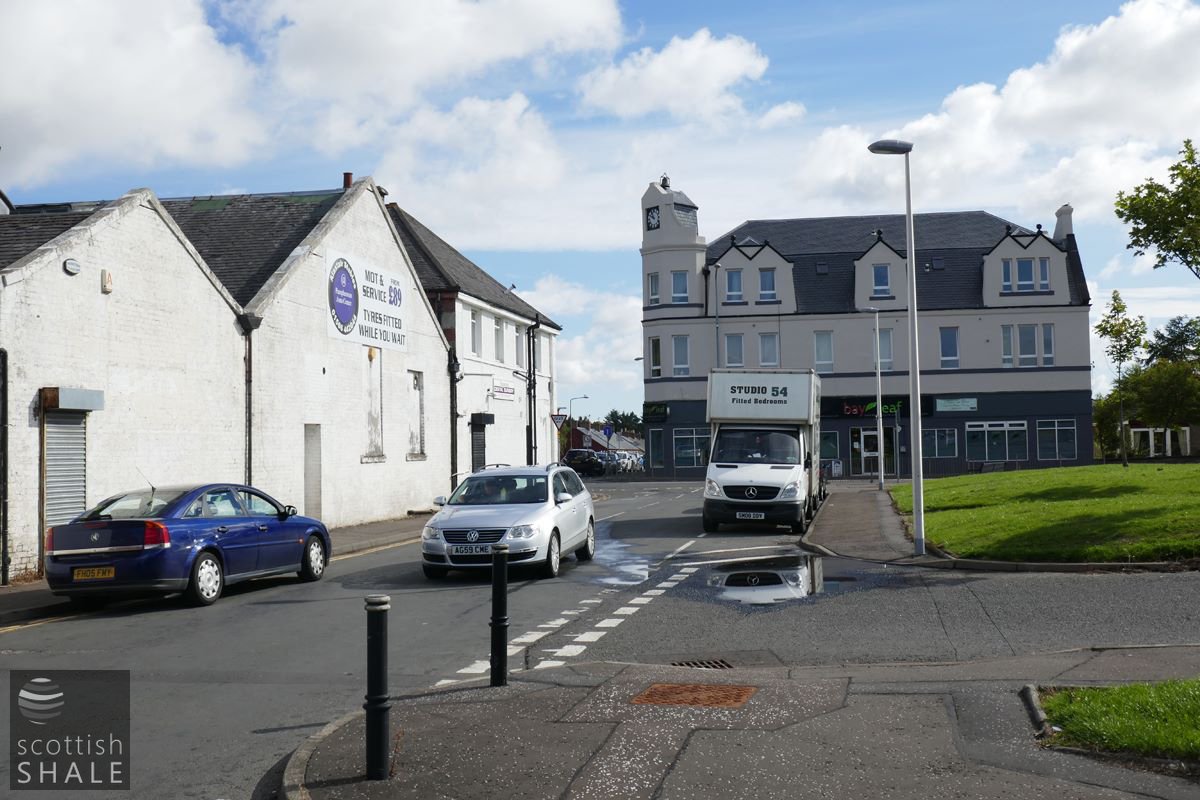 The bakery and the big store. 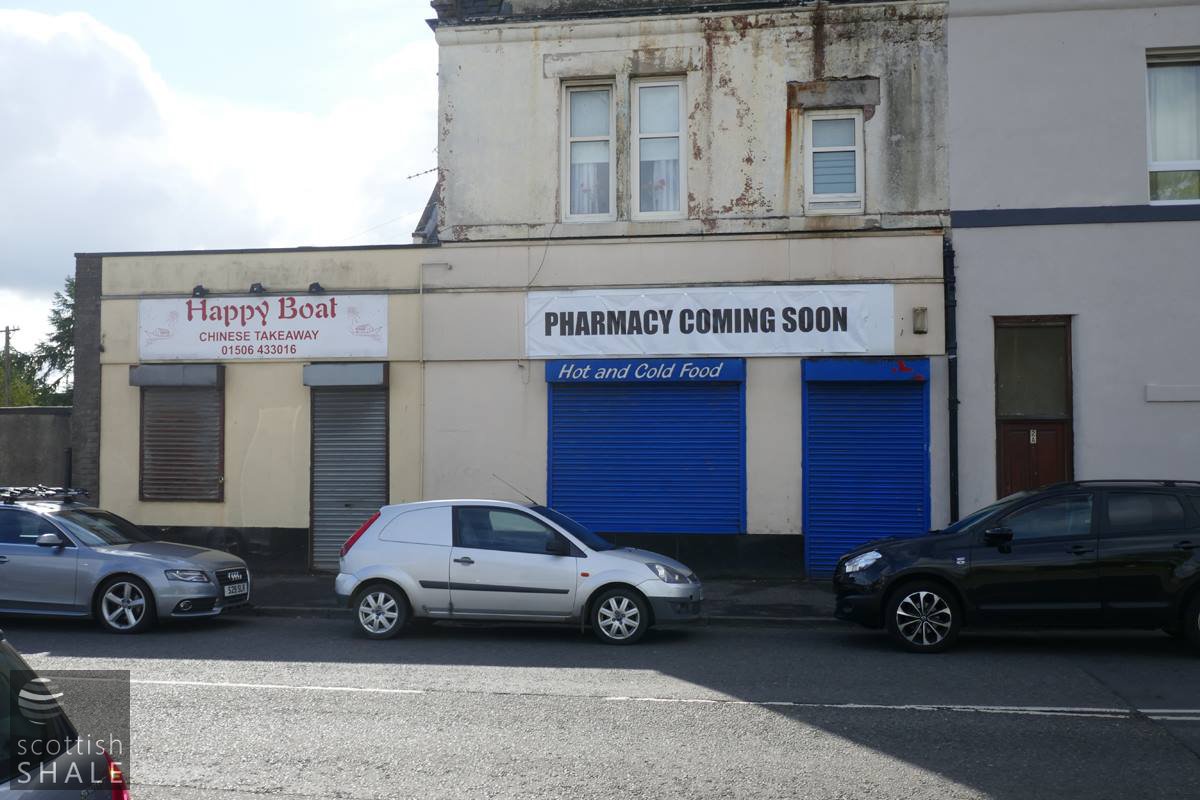 The Happy Boat marks the former entrance to the courtyard through a pend. 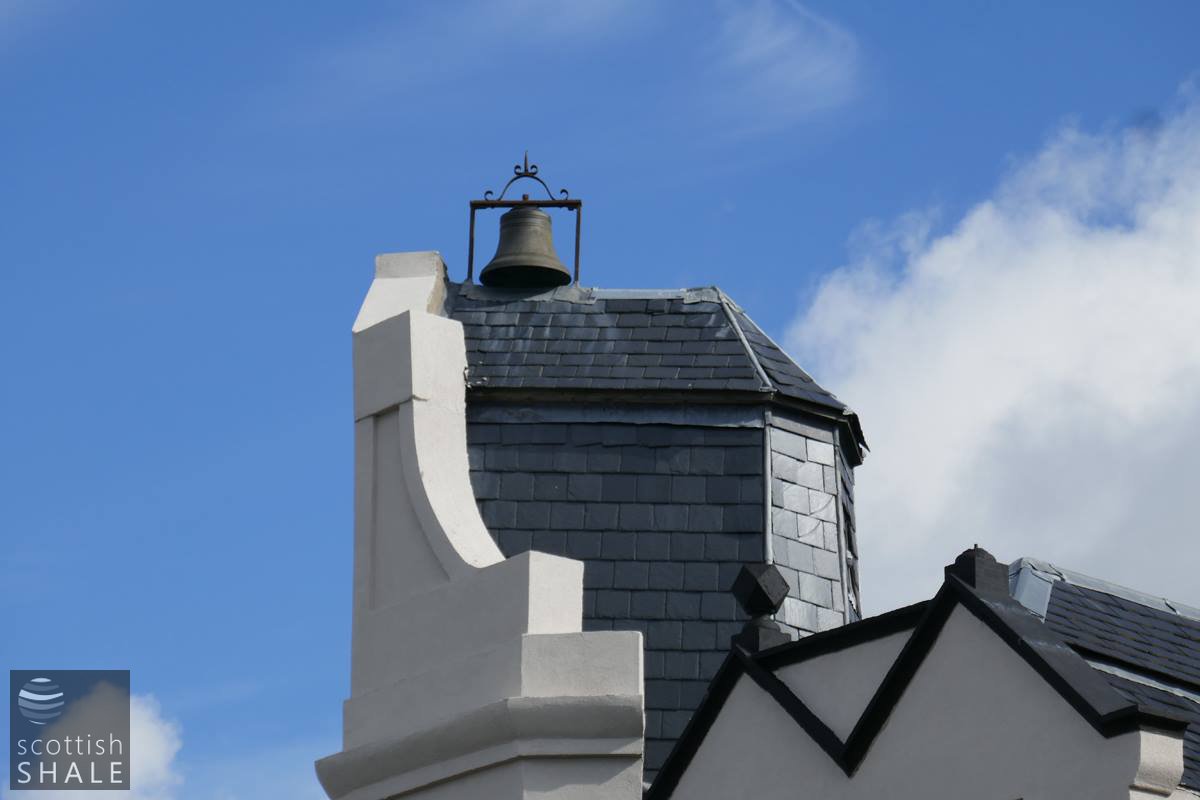 The bell atop the clock tower - can anyone tell us the story of this - does it commemorate something? 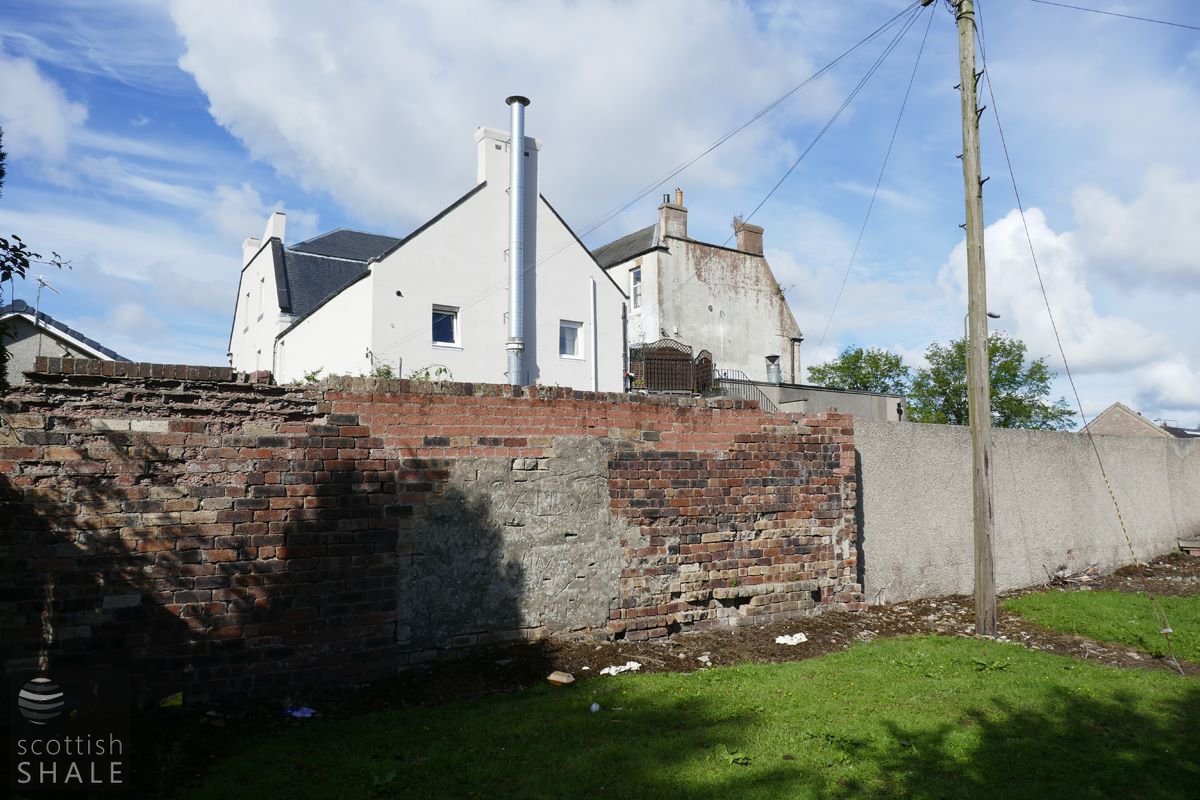 Wall at the rear of the main building, showing traces of the courtyard buildings. 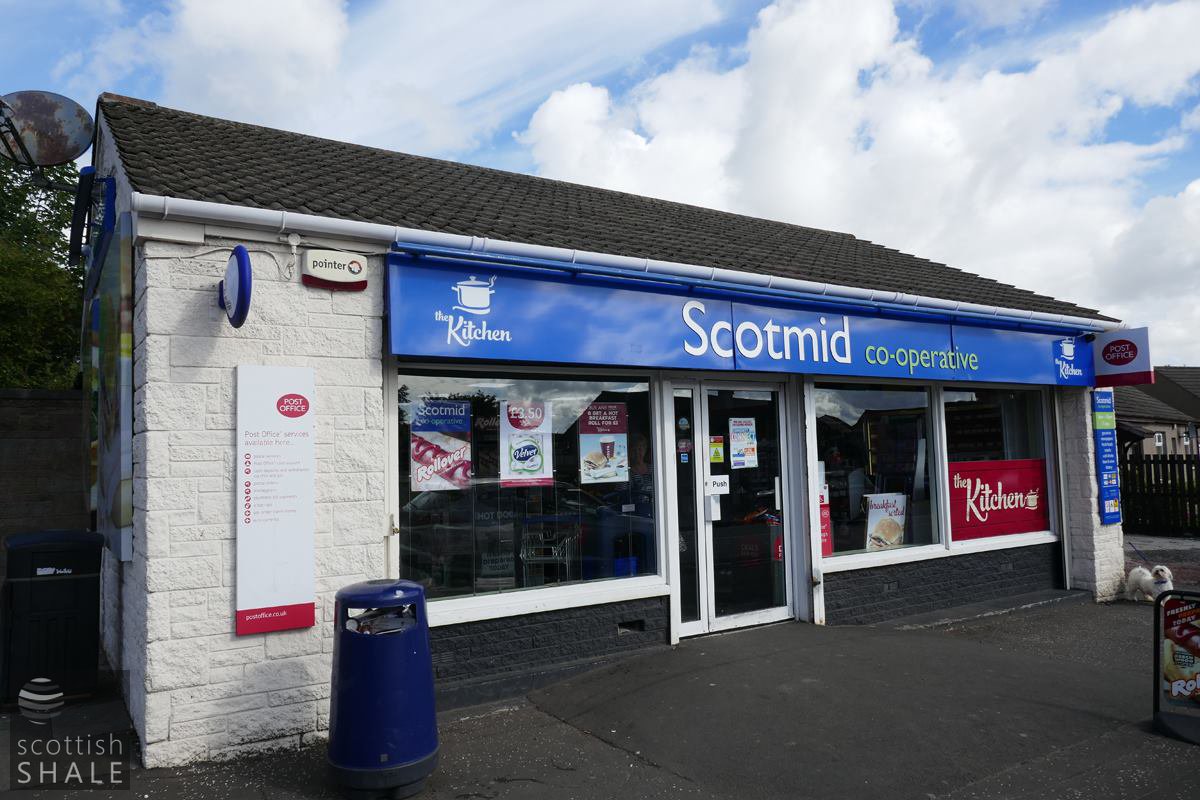 The current Scotmid building. Once served as a Newsagents/Post Office named Laidlaw & Sons. 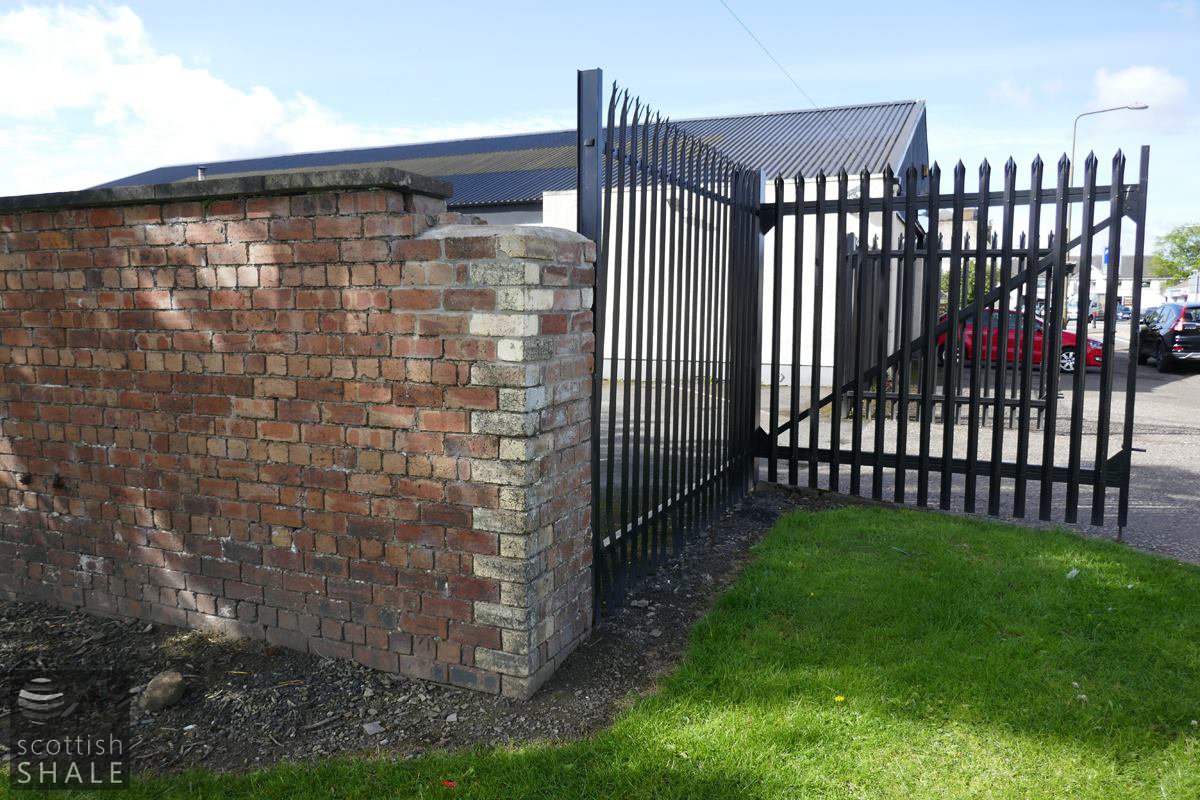 Entrance to the former Braidwood motors yard - was this once of the co-op empire? 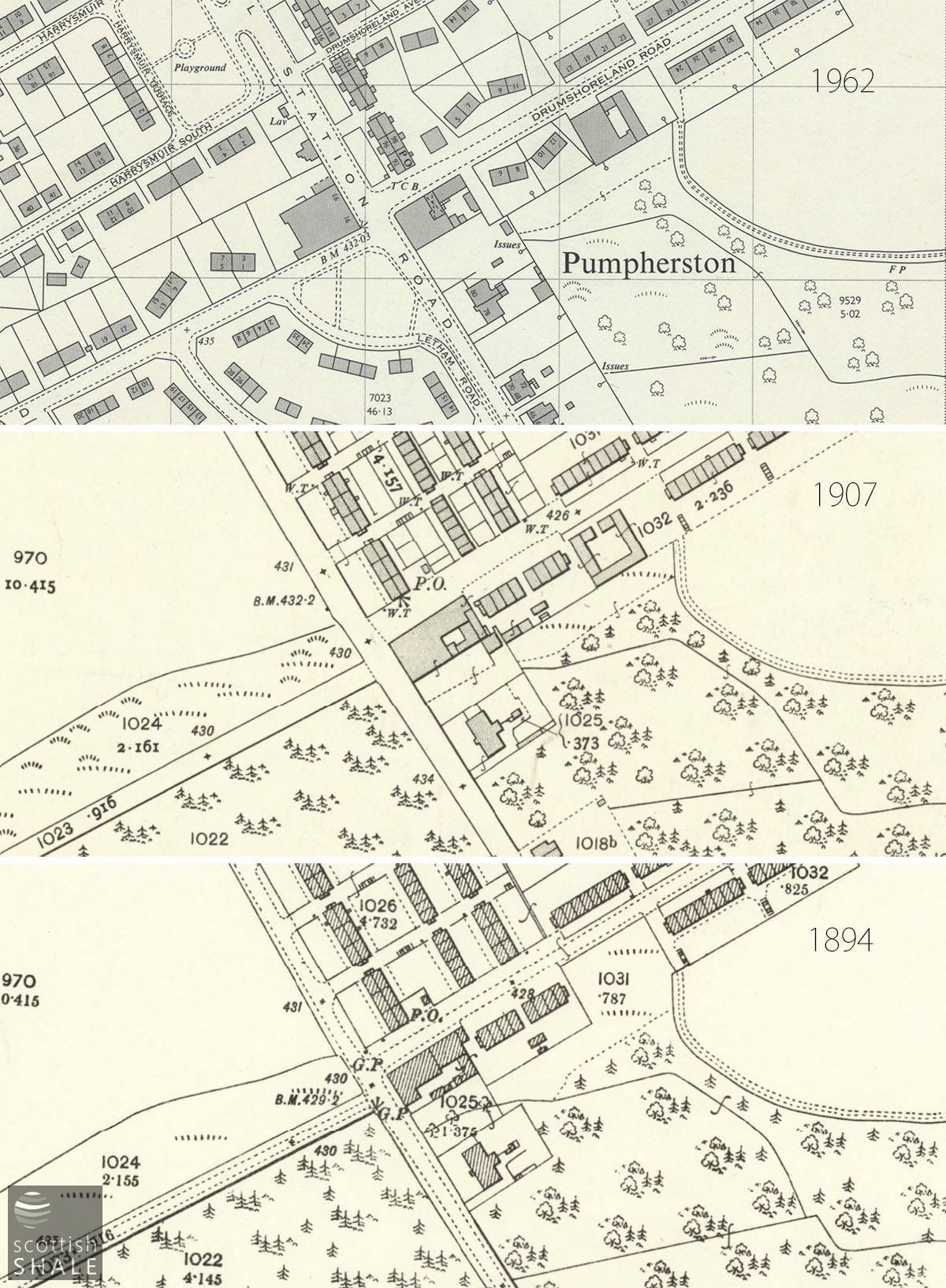 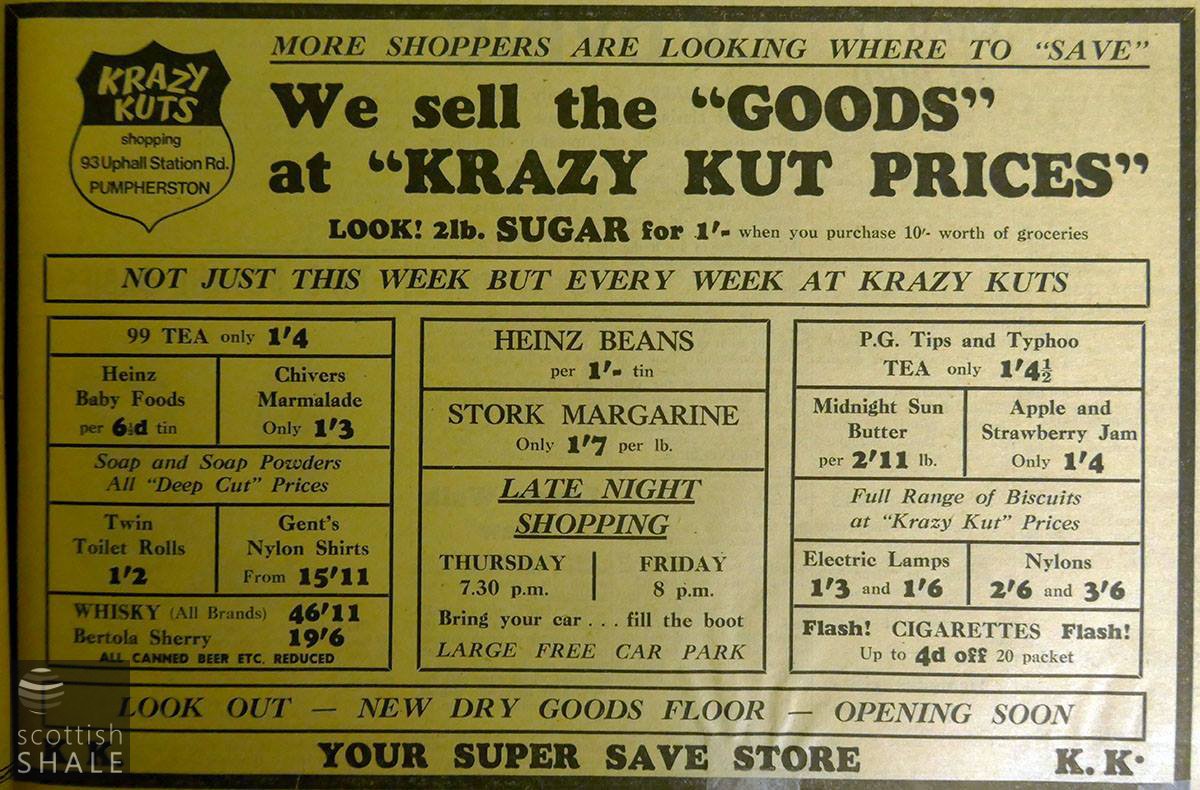