The Lady with the Silver Spade

All evidence suggests that this cabinet card shows the cutting of the first sod of a new tank for the Fauldhouse water works. The group are pictured standing on a grassy slope with a tent pitched in the background.

A photograph recently added to our collection shows a party of handsomely moustached gentlemen standing on a hillside, grouped around a rather stern-looking lady and her female attendant. The lady holds a shining ceremonial spade, suggesting that this was a “first sod” ceremony marking the start of a construction project. The “cabinet card” format of the photo and the style of dress indicate a late Victorian date, and the photographer's stamp suggests a location in the Fauldhouse area.

A search through local newspapers identified only one occasion that fitted the available evidence; – a ceremony to mark construction of a new storage tank for Fauldhouse waterworks, which took place in the lands of Handaxwood, on the slopes of Leavenseat hill, on Diamond Jubilee day, 1897. If our photo records this event, the lady with the spade would have been Mrs Thornton – wife of the local landowner, and the gentlemen would likely be members of Fauldhouse Water Trust. This happy celebration gives no hint of the conflict over Fauldhouse’s water supply – dubbed the “Fauldhouse Water War” - that would erupt just five years later. 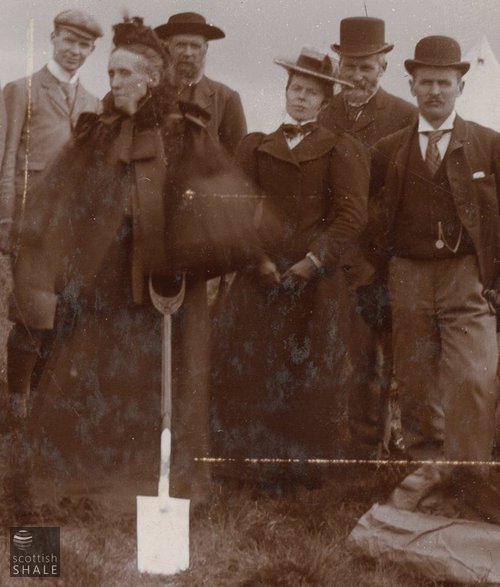 The Fauldhouse area received its first mains water in 1867, following the construction of a small reservoir in the Handaxwood estate, three miles to the south, and installation of cast iron pipes and storage tank leading to a fountainhead in the village. The project was promoted by George Gray, then proprietor of Leavenseat lime and oil works – described as “a gentleman with a lively interest in the welfare of the community” who secured the consent of the landowner S.B. Hare. Funding was also provided by the Coltness iron Company and W.S. Dixon, who owned most of the ironstone mines and worker’s housing in the area at that time. In the absence of a burgh authority, these parties formed a water committee – later the Fauldhouse Water Trust

For many years no charge was made for the water, and the pipes and tanks were maintained by public subscription. However as new housing was built, and the scatter of isolated workers rows gradually merged to form the village of Fauldhouse, increasing demand was placed on the water supply. Ownership of the Handaxwood estate passed to the Thornton family, who operated many of the local pits, and following construction of the new tank in 1897 to meet increasing demand, the proprietors sought to introduce a charge for the supply of water. Villagers who had voluntarily funded upkeep of the pipes and wells were outraged by the introduction of a charge for water which they considered theirs by right.

Legal opinion found against the villagers, and following repeated demands for payment, the proprietors cut off the water supply to much of Fauldhouse. Locals then took direct action to reconnect the supply. There followed increasingly extreme attempts by the proprietors to disconnect the supply, including smashing the cast iron pipes where they crossed a burn, but local residents repeatedly worked to repair the damage and restore the supply; posting guards around the village to prevent further sabotage.

With the growing threat of public disorder, and fears that lack of mains water would further extend an epidemic of measles, the County Council stepped in to take charge. A new water district was created and soon plans were drawn up to establish new sources of water supply for the growing village.

Above right: Close-up of some of the participants - perhaps the wind caught Mrs Thornton's shawl? 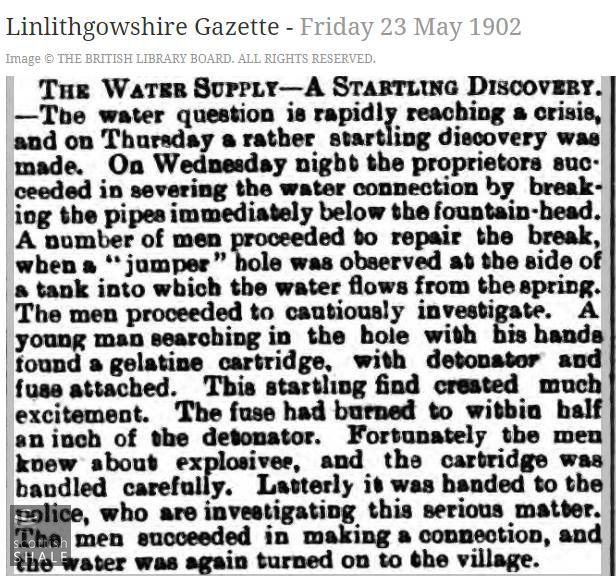 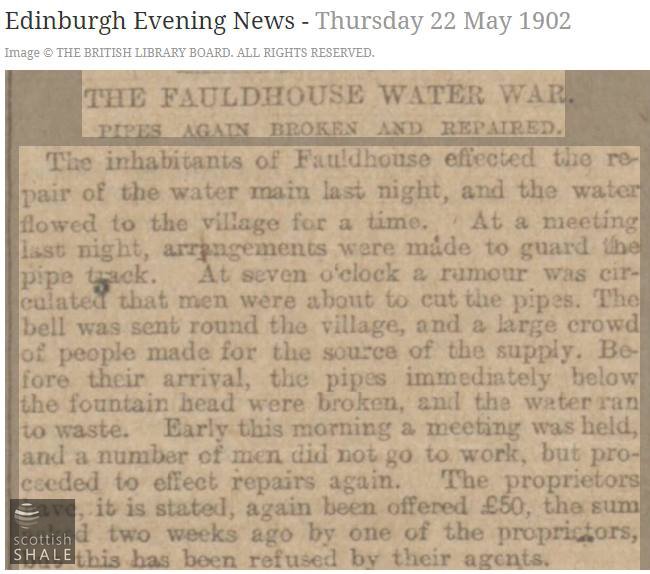 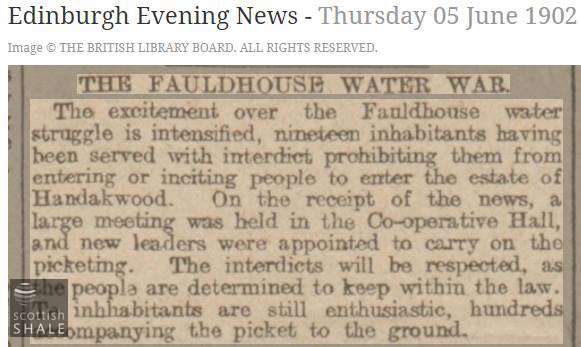