The Last of the Auld Thatched Biggins

A thatched cottage in Blackburn 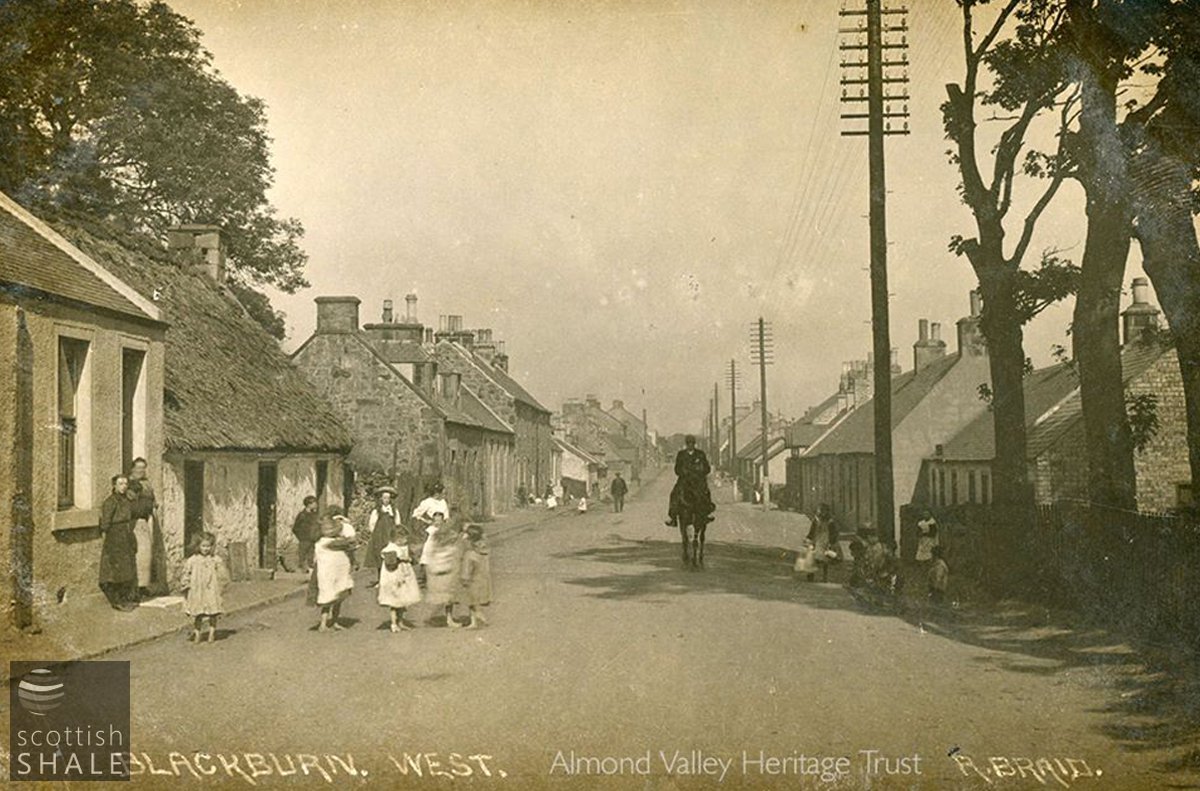 When Robert Braid set up his camera, it often attracted the local weans who posed obligingly to be photographed, bringing many street scenes to live. The date is probably about 1910. In the distance on the left, the surviving Margaret Cottages - built 1905 - can just be made out, set back slightly from the road. 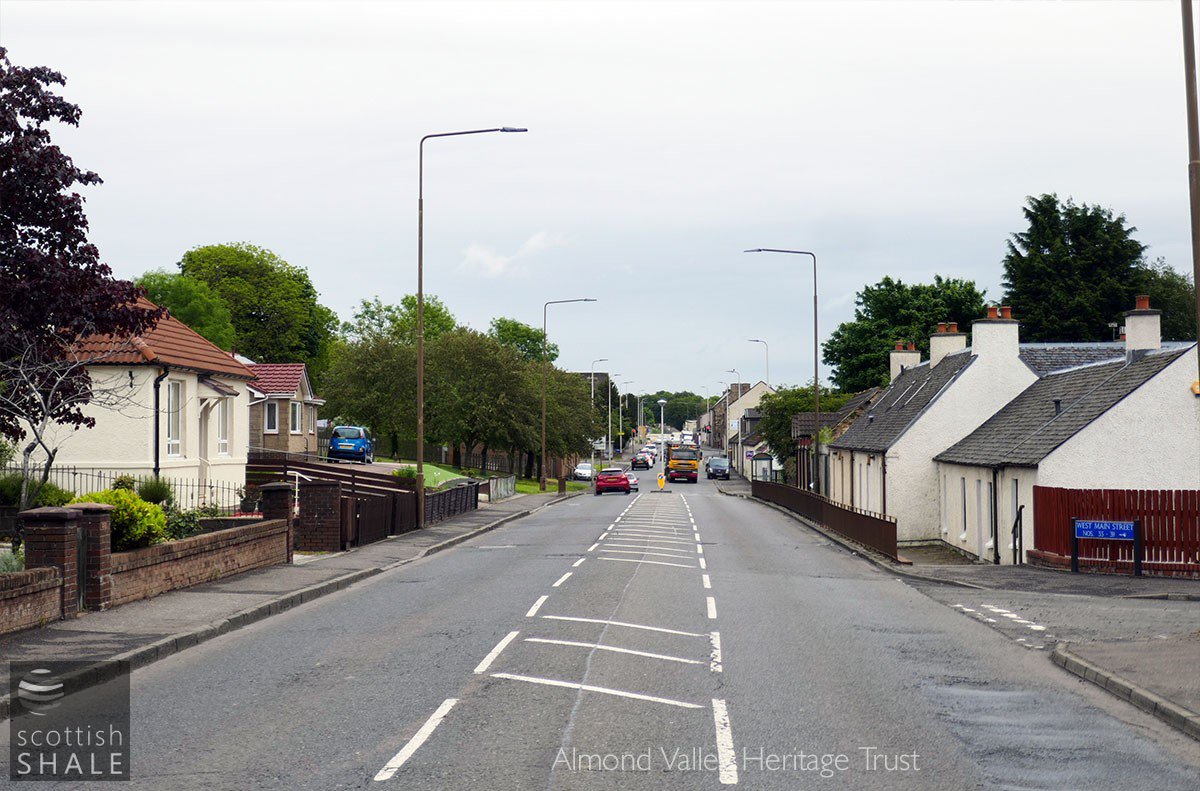 The scene today, - most housing on the southern side of the street (right) still survives. 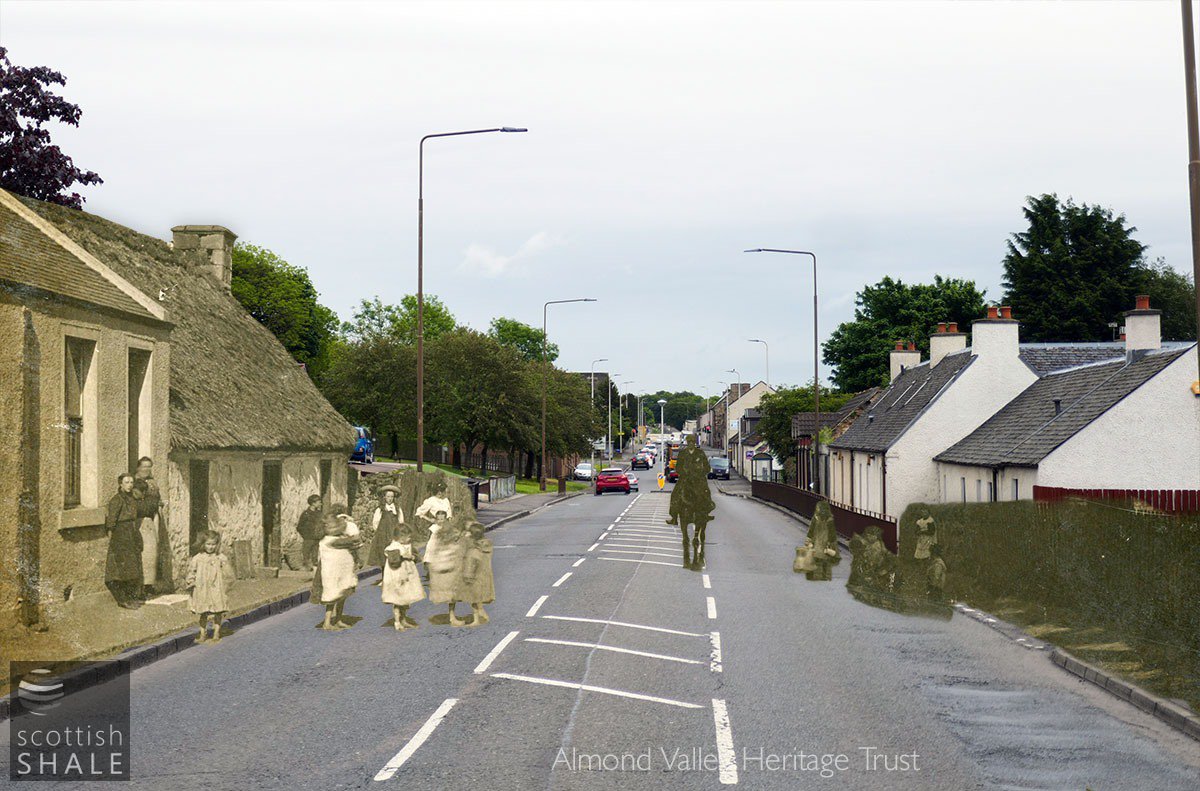 At the start of 19th century, most West Lothian villages still consisted of thatched "biggins” – rows of low-roofed houses constructed from roughly hewn stones, whitewashed and topped with a thatch of wheat straw. As industry spread, it brought affordable supplies of bricks, cut stone, pantiles, slates and other mass-produced building materials that enabled a new and better style of housing. By the end of the century the surviving old biggins were considered so much of a quaint curiosity that their demolition was often reported in the local press. The last thatched house on Broxburn’s main street (at the corner of Greendykes Road), was cleared to make way for development in 1894; the last row of thatched houses on Bathgate High Street was demolished in 1904; and 1922 marked the demise of Whitburn’s last thatched property.

The “new town” of Blackburn was established in around 1770 to house villagers displaced from their original homes by the construction of Blackburn House. It seems that many humble homes constructed in this new settlement were of the old style of thatched biggin’. Blackburn subsequently developed as a major industrial centre following construction of a cotton spinning mill in the 1793, and further housing was built to house the growing workforce.

Our view of Blackburn was taken by Livingston photographer Robert Braid, probably in around 1910. It looks eastward towards Blackburn Cross from a viewpoint close to where Mill Road joins West Main St. On the north side of the road, local weans congregate in front of the one house that retains its thatched roof – perhaps a survivor from the pre-industrial Newtown of Blackburn. Four blocks along the street towards the Cross, there’s a glimpse of another rough-walled whitewashed house, with a couple of steps leading up to the door,. This might be equally ancient despite having acquired a pantiled roof. Parts of this building are seen in more detail in our 1929 photograph which features the Roman Catholic Church built in about 1924. The county sanitary inspector received an application in 1910 for alterations to a house in Blackburn by “heightening walls, and slating in place of thatch”. Perhaps this related to one of these properties? Both seem to have been cleared prior to World War Two.

On the north side of the street, Margaret Cottage (which proudly displays a construction date of 1905), is the only survivor from this scene until the former Turf Tavern at the Cross. On the southern side, much more survives including a substantial range of single storey stone buildings that pre-date the 1856 map, and presumably once housed mill workers. Within this row, the slate roof was removed from the former newsagents shop a few years ago which still provides a glimpse of its construction – it remains possible that these buildings were also once thatched. 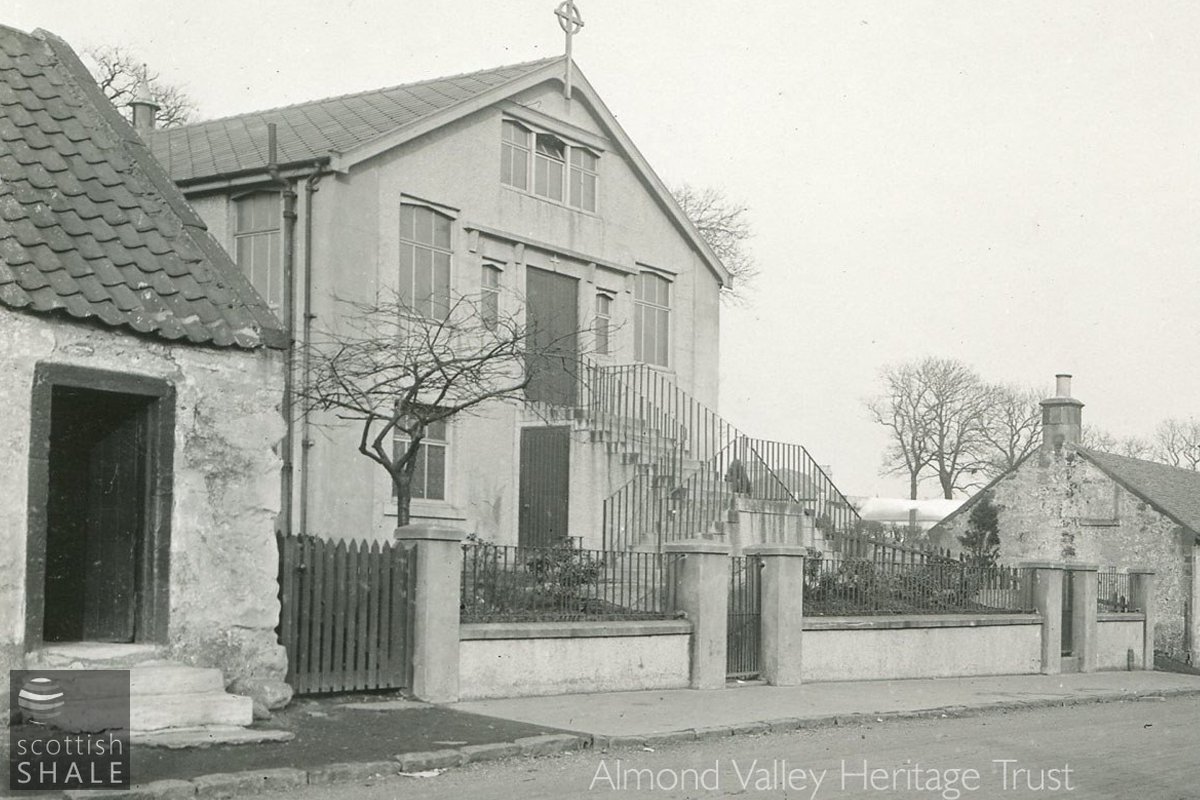 Blackburn Catholic Church, on the north side of West Main St., opened 1925, but severely damaged by fire in 1954. The pantiled building on the left appears to be of considerable age. 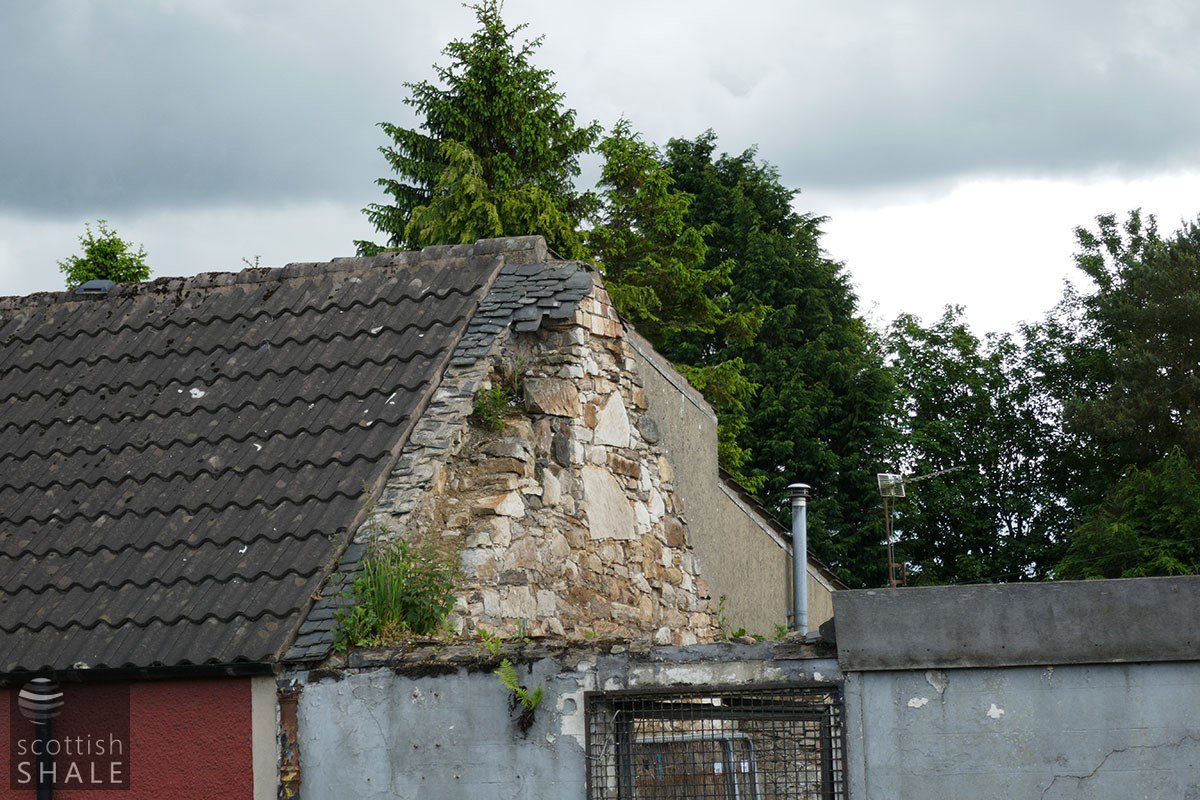 The roofless former shop on the south side of West Main Street, showing the random rubble construction of the gable wall. There appears to be a generous gap between the stonework and the scotch slates - might it have once carried a thatch? 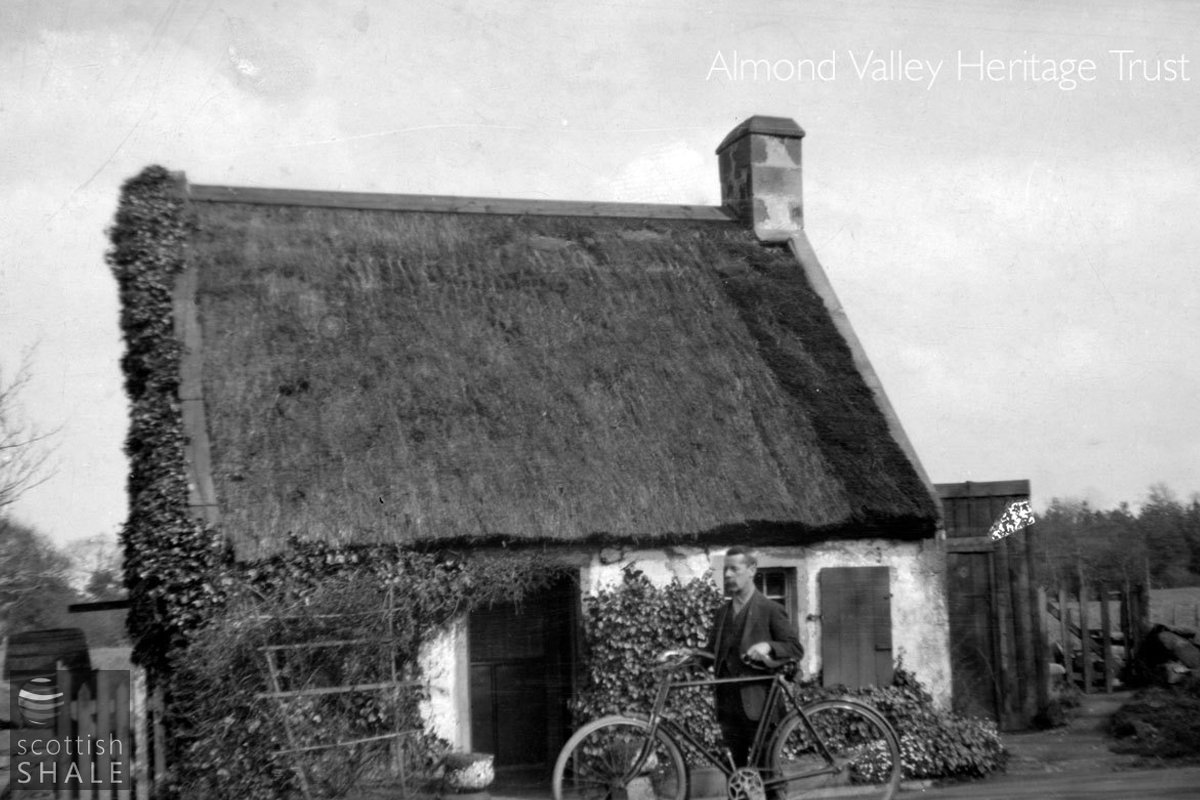 A mystery photo, from a collection of glass plate negatives, most thought to have been taken in the Blackburn area. The ivy-clad thatched cottage appears to be in a rural setting - can anyone suggest where it might have been? 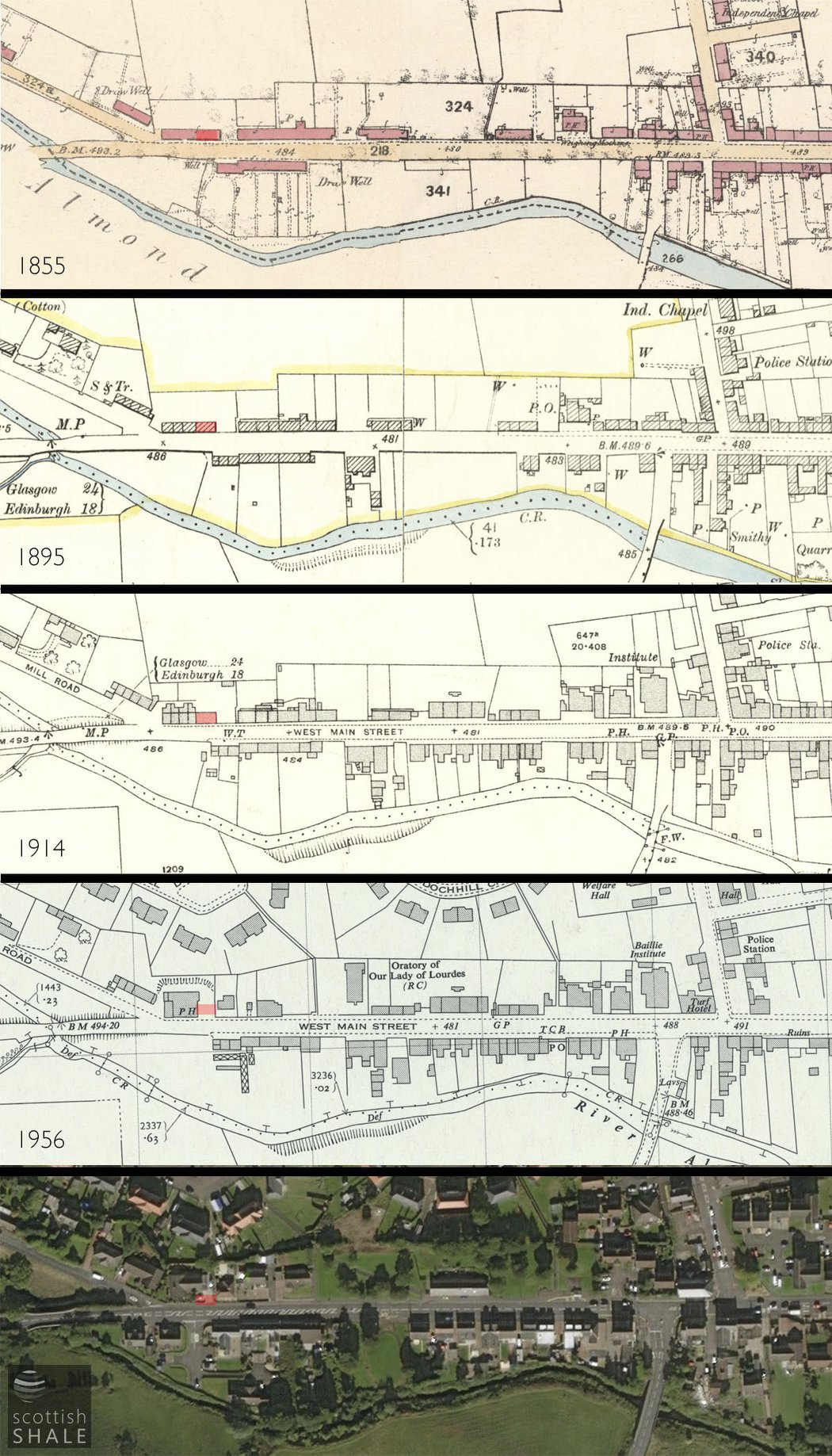 Evolution of West Main Street, with the thatched cottage marked in red. Map images courtesy of National Library of Scotland.