“’It would certainly be esteemed one of the greatest discoveries of the age, if any one could succeed in condensing coal gas into a white, dry, solid, odourless substance, portable and capable of being placed in a candlestick’, and it may fairly be said that in the paraffin candle we have a source of light with all the characteristics . . . considered so desirable” Journal of the society of Arts, 1886

Whilst paraffin oil was the main product produced by the Shale Industry, paraffin wax was a by-product that was just as popular and useful, especially for making candles. The wax was produced from the residue of the paraffin oil, which was subjected to further heating, cooling, distilling and purification to make the beautiful white end product worthy of the candles. An ingredient called ‘stearin’ was also added, to make the candles more durable and to have a higher melting point. Many were finished with hand painted floral decorations, making them as much a ‘work of art’ as a household product.

Sir Lyon Playfair, scientist and contemporary of James ‘Paraffin’ Young, made claim that the introduction of paraffin candles was largely due to his ideas. Apparently Young came to him with a sample of petroleum from Derbyshire (the mine where it is claimed Young was struck with inspiration as to how to extract oil from coal and shale). In this sample were floating crystals which Young wanted Playfair’s help in identifying. Playfair deduced they must be paraffin, and asked Young to procure him enough of these crystals in order to make 2 candles, which he then used to light his desk during a lecture at the Royal Institute.

Of course origin stories can often be embellished, but nonetheless Young himself was quick to start production of these paraffin candles, and incorporated a candle works at his site in Addiewell. Candles were also produced at Broxburn, Linlithgow, Burntisland and Lanark, and production started around the mid 19th Century. Young proved himself to be a master producer of the paraffin candle, winning gold medals for them at such events as the Paris Exhibition in 1867.

But candles had been in mass production since the early 1800’s, with products such as palm and coconut oil used to create them. Before this, the likes of spermaceti or tallow (animal fat) had been used. The candles made from paraffin wax proved to be a welcome addition to this market because, compared with some of these other candles, they didn’t smell, they burned much cleaner, meaning less smoke in the house, and they burned a lot brighter, so you got more light for what you paid. Apparently you could get the same amount of light from 98lbs of paraffin wax candles as you could from 120 lbs of spermaceti candles.

The shale industry was not the only candle maker on the market however. Price’s Patent candles was operating from the early 19th Century, importing oil from the likes of Burma, and they held a majority share of the market. In 1922 Scottish Oils Ltd (which was a conglomeration between Broxburn Oil Company, Young’s Paraffin Light & Mineral Oil Company, and three others) joined with Price’s Patent Candles to form Candles Ltd, which was hoped would control the candle market in Britain. As a result of this partnership candle production was concentrated very much to the likes of the Broxburn Works, thereby helping to extend the lifespan of them whilst much of the rest of the Shale Industry was in slow decline.

The large scale production of candles was made easier by Joseph Morgan’s invention of the candle moulding machine. This machine allowed for the continuous production of moulded candles by means of ejecting them as soon as they had solidified, and it could produce around 1500 candles per hour. 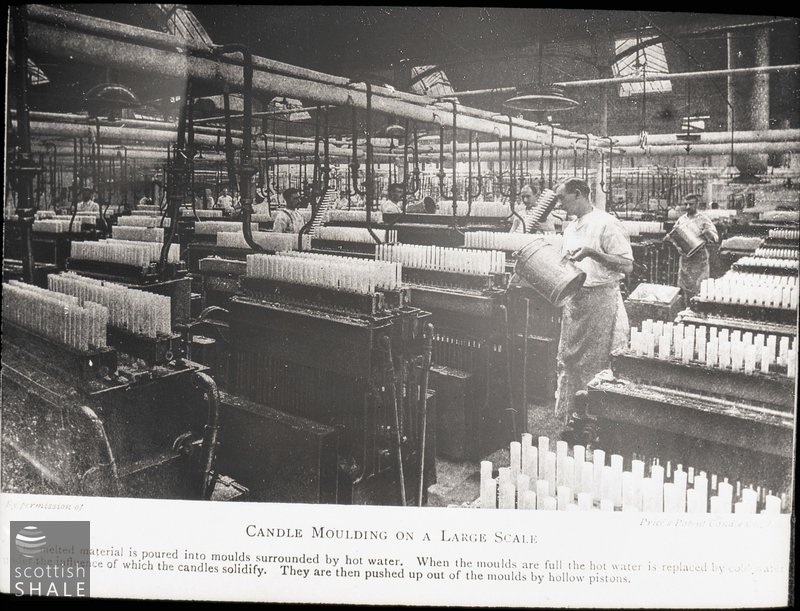 Candle production also included one of the first commercial uses of the refrigeration process. Alexander Kirk, who was an engineering manager at Young’s Paraffin Light & Mineral Oil Company, developed a refrigeration device that would help the cooling stage in the shale oil process. As seen with Playfair, the paraffin wax forms as crystals on top of the paraffin oil, which can then easily be extracted and processed to create the beautiful white candles.

There were many types of candles produced, with many types of uses, from Christmas tree decorations to children’s night lights. During both WW1 and WW2 candle production proved vital as both a source of light for the troops, as well as providing a little bit of a home comfort. During WW1 candles were sent to the trenches, where an unexpected use for the candle developed, as a successful treatment for lice. Wax from lit candles would be dripped down the seams of their clothing to burn the lice out. During WW2 Price’s candle factory in London was bombed, and so production had to increase in Broxburn to meet demand. During the bombing power stations and gas producing plants were also naturally affected, and so candles became a particularly useful purchase. The demand for candles was so high during these wartime periods that women were employed to help with the production of the product, particularly to pour the wax into the frames of the candle making machines, and you would often find boys as young as 14 on the production line, packing the candles into boxes.

Despite the gradual decline of the Shale Oil Industry the candle works managed to continue production for a longer period of time. However, new inventions such as the lightbulb and kerosense lamp meant that the candle wasn’t the necessity it once was. Eventually the candle works in West Lothian closed, along with the entire shale oil industry itself. Candle’s Ltd became Price’s Patent Candles again, continuing to manufacture candles in England as they transitioned from an essential household item to more of a luxury. 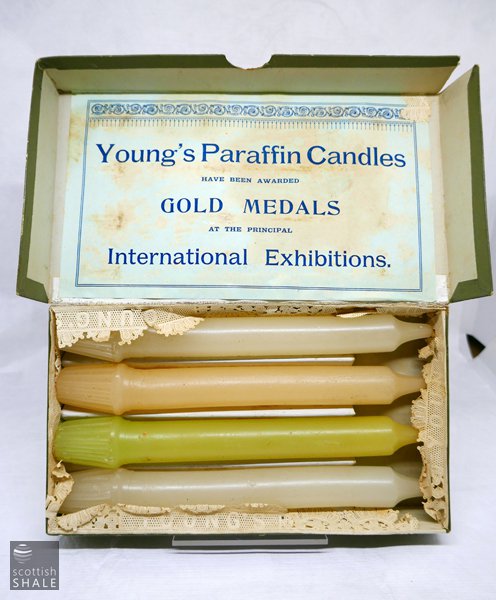 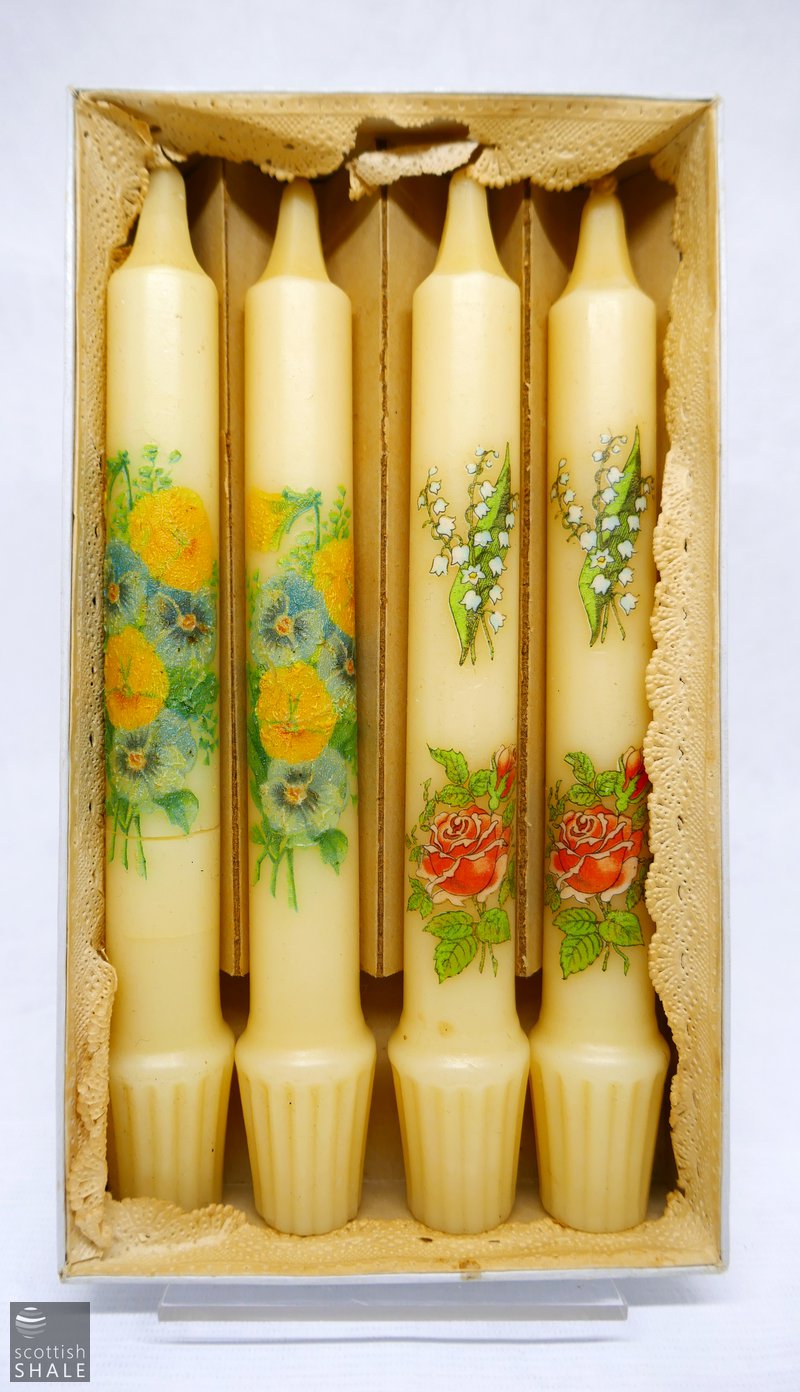