The old drove road at Tormiewheel

Our highland guide marks the location of White House.
These and other images taken last weekend.

Following the Union of the Crowns in 1707, a considerable trade in cattle grew up between Scotland and England. Hardy black cattle, raised in highland glens, were driven to the Falkirk trysts for sale, and from there herded southward on an epic journey to London and other parts of England. These great droves took place in an age before fields were enclosed with fences and walls, and before many roads were surfaced. The routes followed by these great herds of cattle – the drove roads – were seldom clearly defined unless constrained by mountain passes, river crossings or other natural topography. The drover's main consideration was to find suitable places to graze their cattle and set up camp each night. Most droves across West Lothian probably converged on the high pass across the Pentland hills at the Cauldstane Slap, There is however evidence that some drover's chose a less direct route that passed by way of Bathgate, Whitburn, and Lanark. A recent chance encounter with a herd of friendly highland cattle, revealed some traces in the landscape that could be evidence of the distant age of drovers.

Part way between Breich and Forth, and close to the border with Lanarkshire, the A704 road to the West Calder branches off from the A705 – the road that once linked Lanark with Bo'ness. Old maps, and traces that survive in the landscape, indicate that this three-way junction was once the meeting of five roads. Heading west, a track once ran to early limestone quarries on the shoulders of Levenseat hill. This route is now now largely lost among the moss and the rushes. The ghostly remains of a fifth road, heads due south from the junction, in the direction of Wilsontown. One early map marks this as “drove road”.

It seems that the A705 generally follows the route of an old drove road heading south by way of Lanark. Following the construction of the Wilsontown ironworks in 1779, the Cleuch road was built along this route, to enable the products of the ironworks to be carted to the port of Bo'ness. During construction of this road, or in association with the construction of the Edinburgh, West Calder and Lanark turnpike road, it was decided to follow a new course between Wilsontown and the junction between the Cleuch and West Calder roads, a little to the west of the original. The old route followed by the drovers then gradually fell into disuse.

When the road to West Calder was upgraded by a turnpike trust, it seems that a toll bar was constructed at the junction with the Cleuch road. This was marked as “Middle Muir” or “Middle Muirhouse” on early maps, but the first Ordnance Survey map of 1852 labels the site as “White House”, and shows a small building set in an area of land enclosed between the Cleuch road and the old drove road.
In 1852, when place names were recorded to feature on the first ordnance survey map, the great cattle droves may still just have been within living memory. The name “Drove Loan” was recorded, presumably relating to the abandoned piece of road, as Thomas Stark of White House is quoted as one of the authorities. The name book records

…..”it is very rough but well defined, although never used as a public road, no person can appropriate the soil by planting, cultivation or otherwise. It was formerly remarkable for the passage of droves of cattle brought this way on their journey to the English markets”

By 1893, when the next ordnance survey map was published the White House had been demolished and the old drove road shown only as a track.

The chief of our cooperative cattle was good enough to pose on the site of the White House, where the outline of the building and its garden are still evident beneath the moss. The rest of the herd chewed contentedly among the hummocks that mark the site of old sandstone quarries. Between the two lay the slightly sunken route of the old drove road, still marked by a broad strip of rushes that strike southwards towards Wilsontown, Lanark and London. 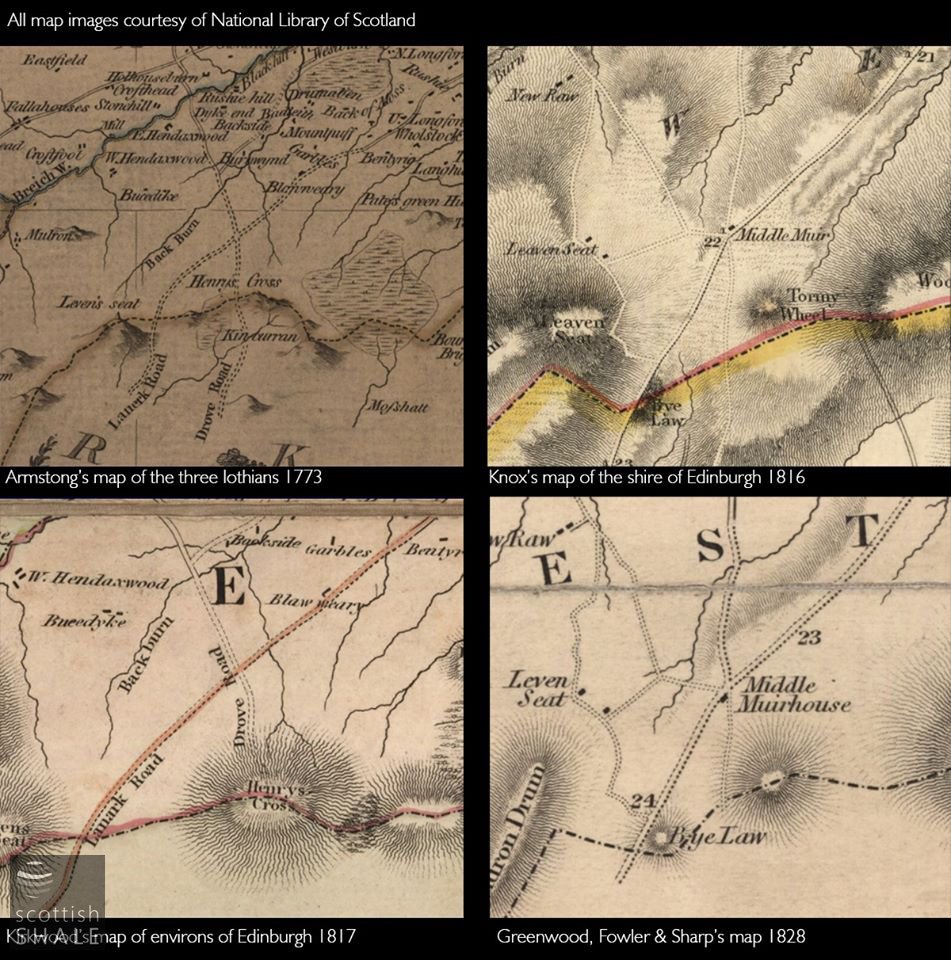 "Drove road" is marked on two of these maps. 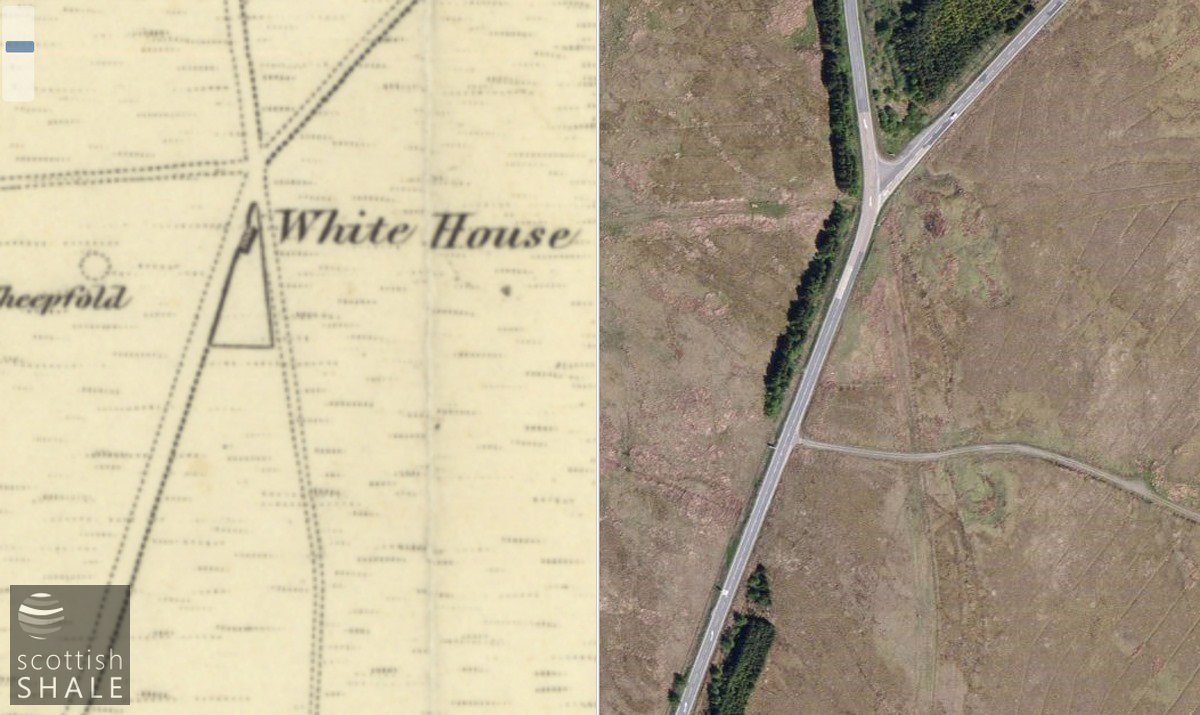 The five-way junction marked on the OS map of 1852, and the three-way junction today. Map image courtesy National Library of Scotland. 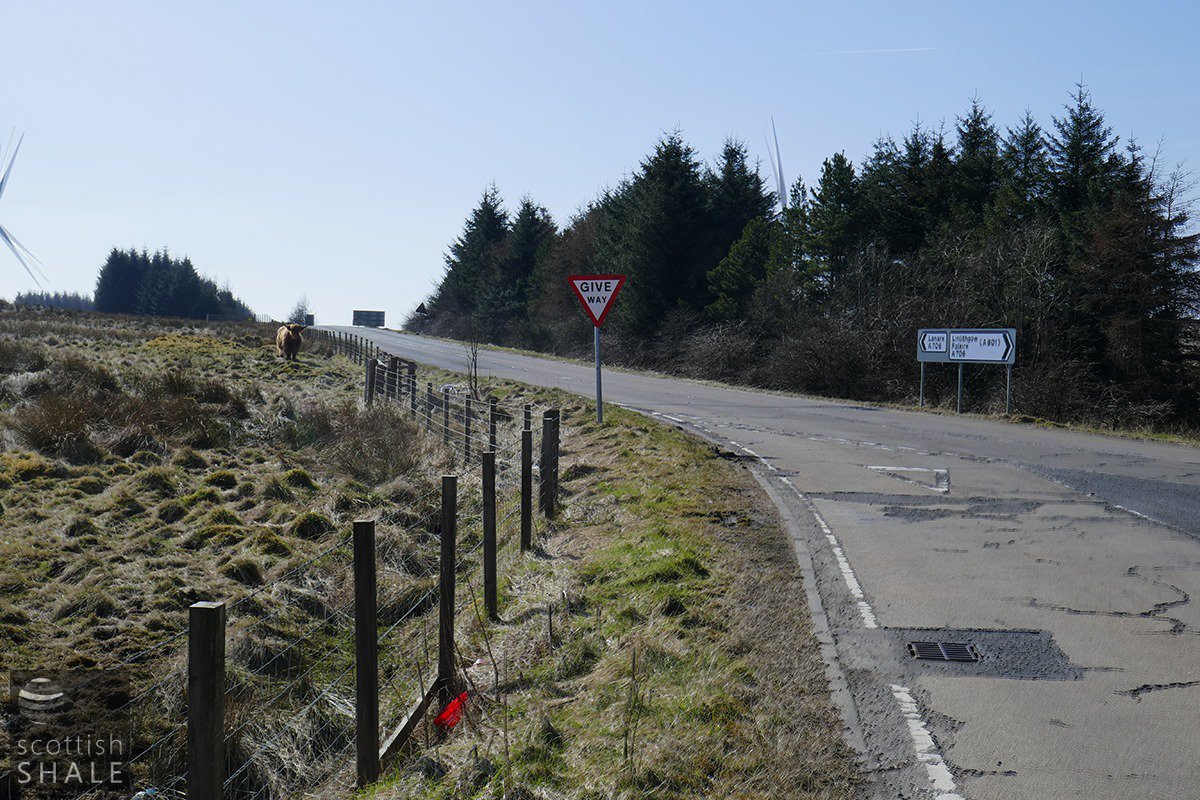 One ghost road would have carried forward near the location of the signpost, the drove road would head left in front of out highland friend. 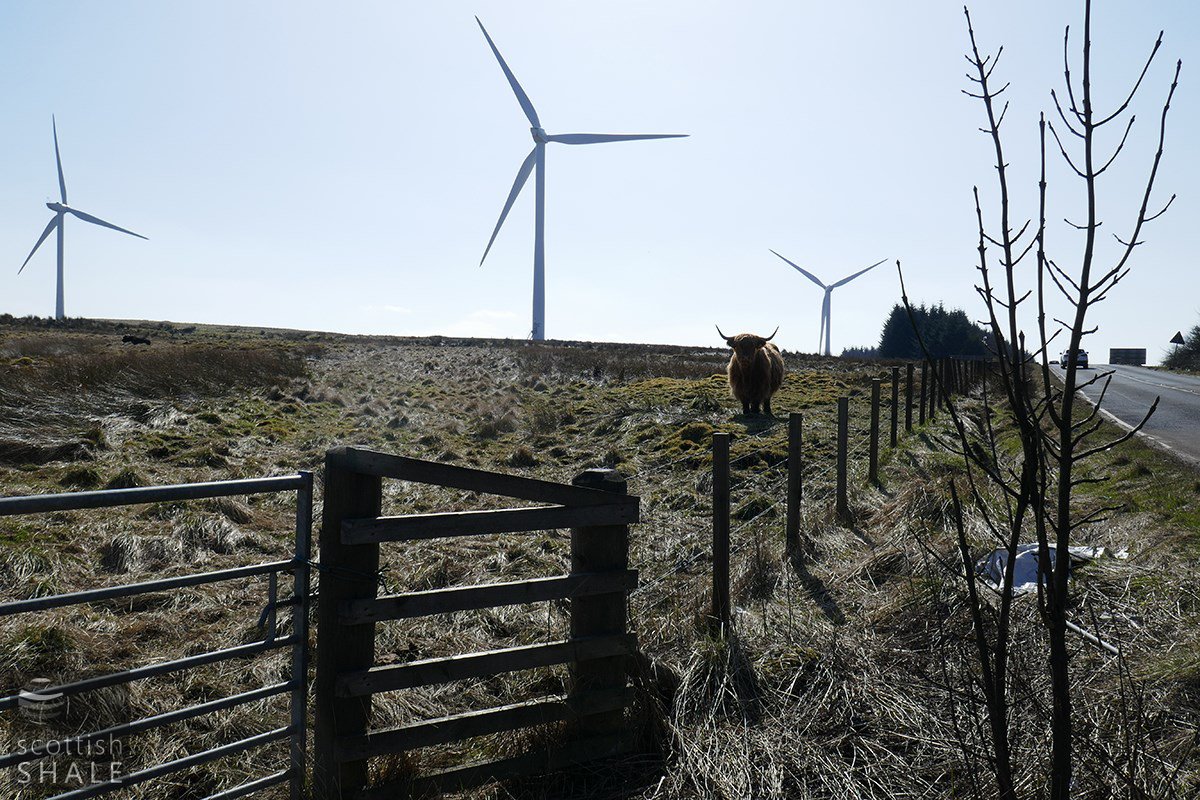 Beyond the stile, the reeds mark the route of the drove road. 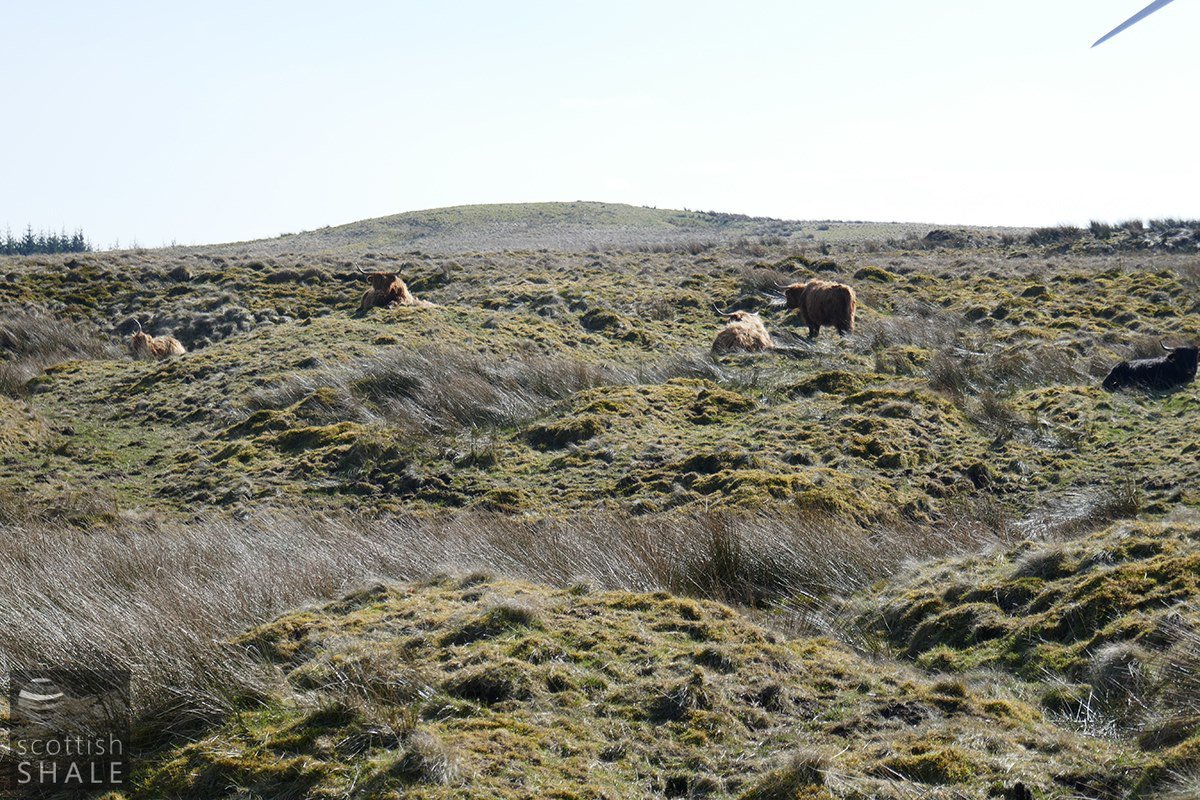 The rest of the herd in the old sandstone quarry, with Tormiewheel on the skyline.