Mid Briech – A Home in the Countryside

The shale village of Mid Breich 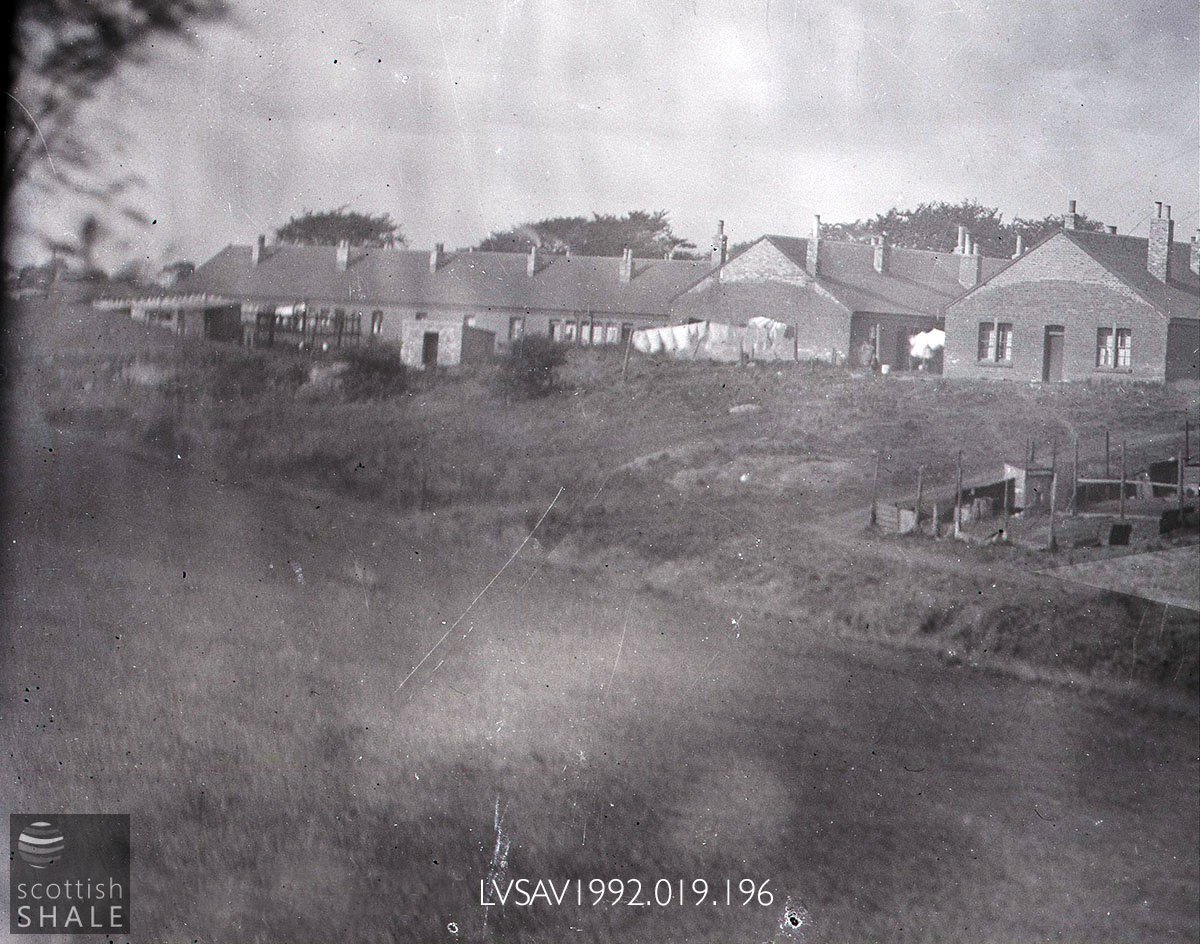 Our only photograph of Mid-Briech (first part), viewed from the south, showing the original Hermand Oil Co. houses, washing and outhouses.
The arched mark on the gable ends of the two rows is a puzzle - did the houses have an unusual curved (iron?) roof before being improved by the Pumpherston company? 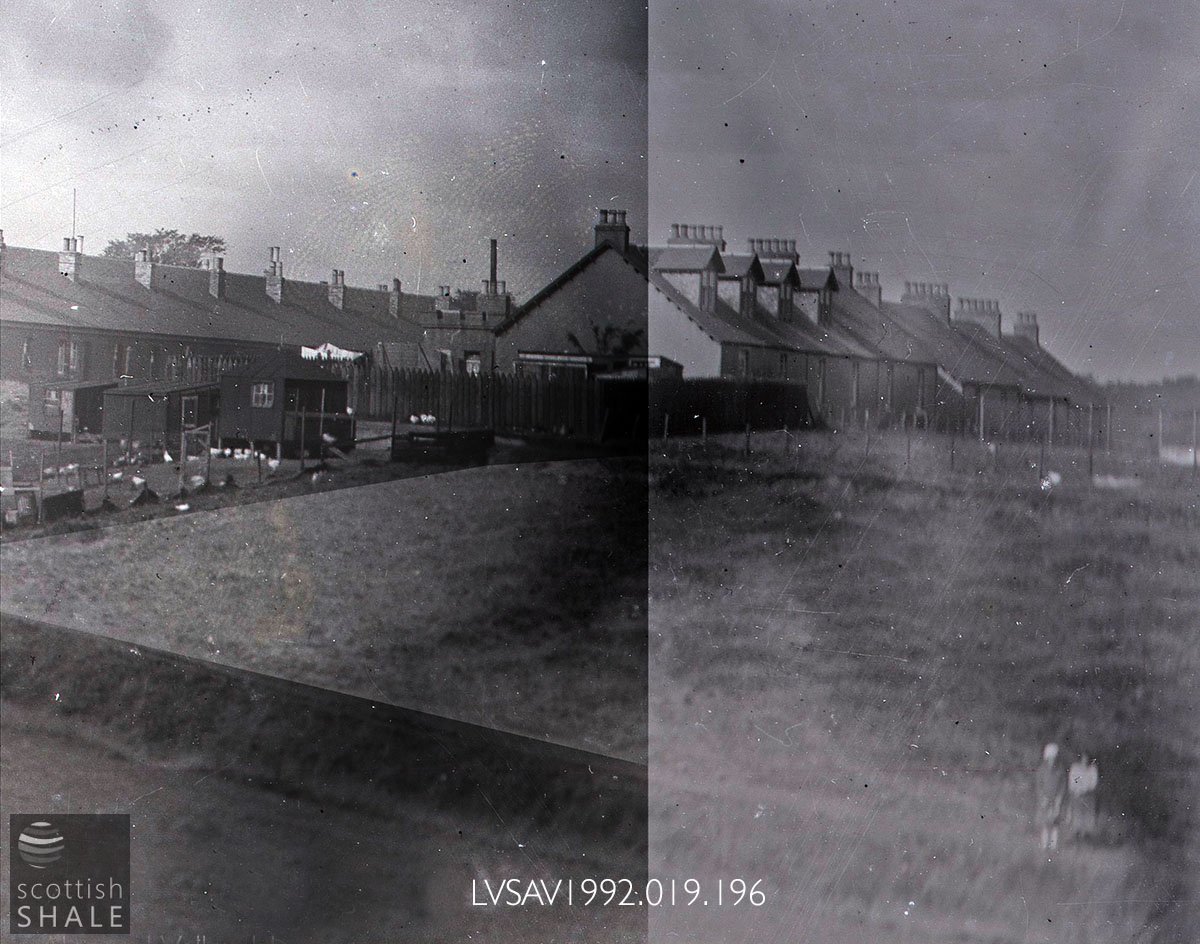 Our only photograph of Mid-Briech (second part), viewed from the south, showing the two rows built by the Pumpherston Oil Co., plus some henhouses.The haulage that once linked No.4 pit and Breich oil works is marked by the cutting in the foreground.

Lying half-way between Addiewell and Seafield, the community of Mid-Briech is one of the less well-known of West Lothian's lost shale villages, despite surviving well into living memory. It may be that some former residents are still with us.

A village of 32 homes was built in the late 1880's following formation of the Hermand Oil Co. Ltd., and their construction of the Breich (or “New Hermand”) oil works. The Hermand Oil Co. Ltd took over the oil interests of James and Thomas Thornton who had operated oil works on the Hermand estate to the south of West Calder. The company had a short and troubled history, being absorbed into a company of the same name in 1890, which owned a refinery in Renfrewshire. During most of the 1890's, the Briech oil works remained closed, awaiting better economic times. After the company failed, a new company, “The New Hermand Oil Co. Ltd”, reconstructed and resumed production at the oil works for a couple of years, before being forced into liquidation in 1903. The highly successful Pumpherston Oil Co then purchased the company's assets to secure the rich seam of Dunnet shale that lay deep beneath the lands of Wester, Mid and Easter Briech. Breich oil works were allowed to fall derelict once all worthwhile equipment had been stripped-out and transferred to the Pumpherston Oil Co's Seafield works.

The 32 homes of Mid Breich (often referred to as “New Briech”) seem to have been built as single room dwellings arranged back to back within three rows. As was usual at that time, only dry privies were provided, and piped water did not reach the village until 1900. The company's No.4 shale pit lay just west of the village, and the tramway linking this to the oil works ran right past the rows. During the long periods in which the oil works lay silent, many houses in Mid Briech remained empty.

It was not until about 1910 that the Pumpherston oil company began to exploit their Breich estate, sinking Briech No.1&2 pit, which initially supplied shale to Seafield works by over-ground haulage. This proved to be one of the most productive shale pits and survived almost until the end of the shale industry. At about the same time, the company built twelve new homes at Mid Breich to their usual good standard; with room, kitchen, attic bedroom, and scullery to the rear with the company's trademark castellations at the roofline. The older houses were also improved, with some being knocked together to provide two-room homes. One house (no.2) was adapted as a meeting room, another (No.12) as a shop.

Mid-Breich, being in Livingston parish, looked northward to Seafield and Blackburn rather than south to West Calder, which was in a different parish and a different county. The footpath between Breich and Seafield was well-used. In 1910, the construction of Redhouse school, strategically located between Seafield and Blackburn, meant that the children of Mid Breich no longer faced a long journey along country-side paths to school in the neighbouring county at Addiewell or Gavieside.

Hidden away in pleasant rural surrounds, life for Mid Breich's 230 or so residents must have been a lot more pleasant than in many other shale villages. Many kept chickens and tended vegetable gardens. During the 1930's, the village broke from partnering with Seafield, and ran its own gala day. A post box was installed in the village in 1925, and, following the World War Two, a phone box. In about 1950, one home was converted to serve as a sub-post office. The only downside to this country life was the poor bus service.

With the end of the shale oil industry in sight, Scottish Oils began to close housing as it fell vacant. From 1958 only the “new” rows in the village were available to new tenants, and even these were emptied following the closure of Westwood, Scotland's last shale oil works, in 1962.

Today only an area of woodland and a few lumps and hollows marks the site of this friendly, self-sufficient little village. 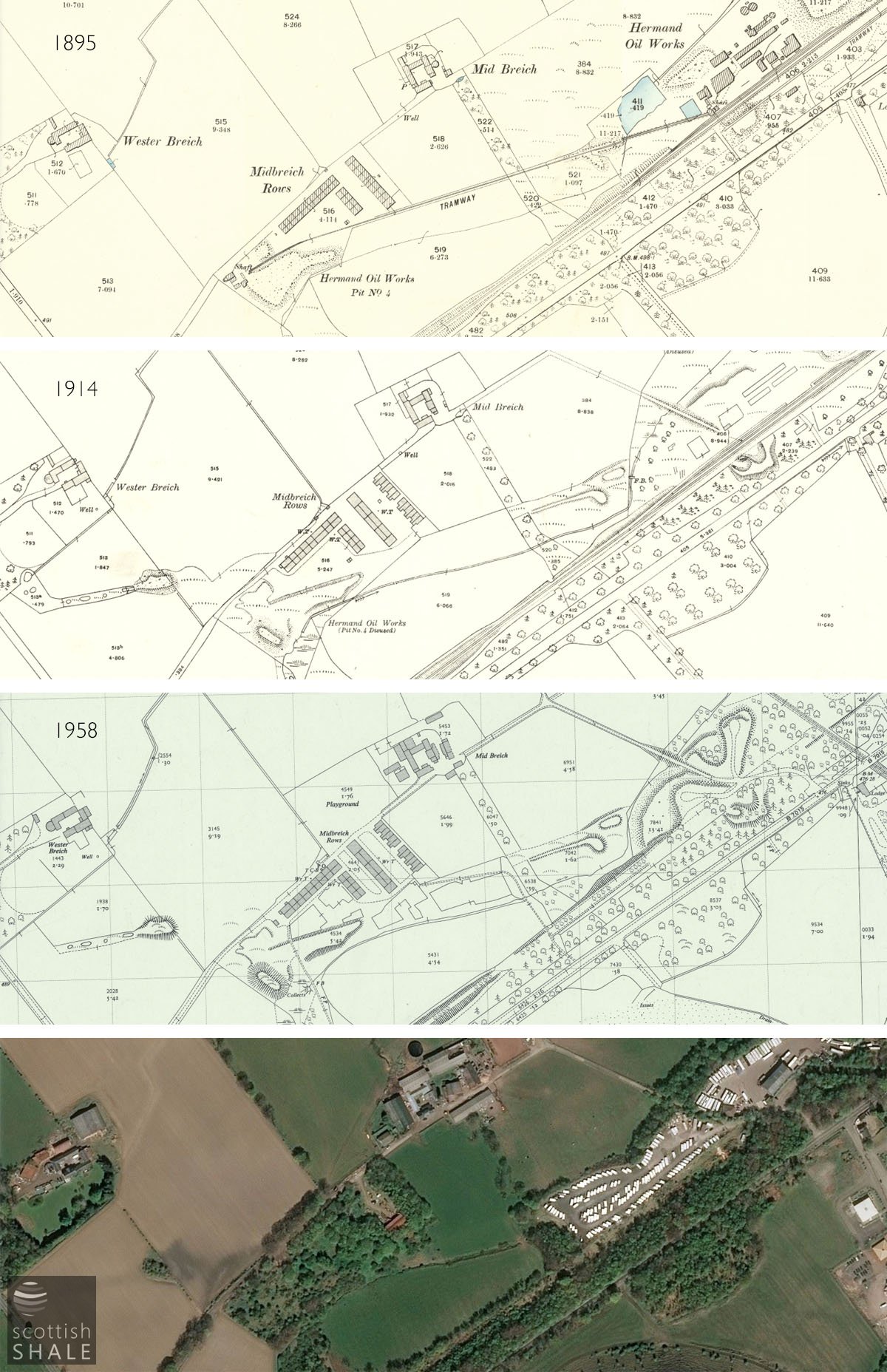 Development through the ages. Map images courtesy of National Library of Scotland. 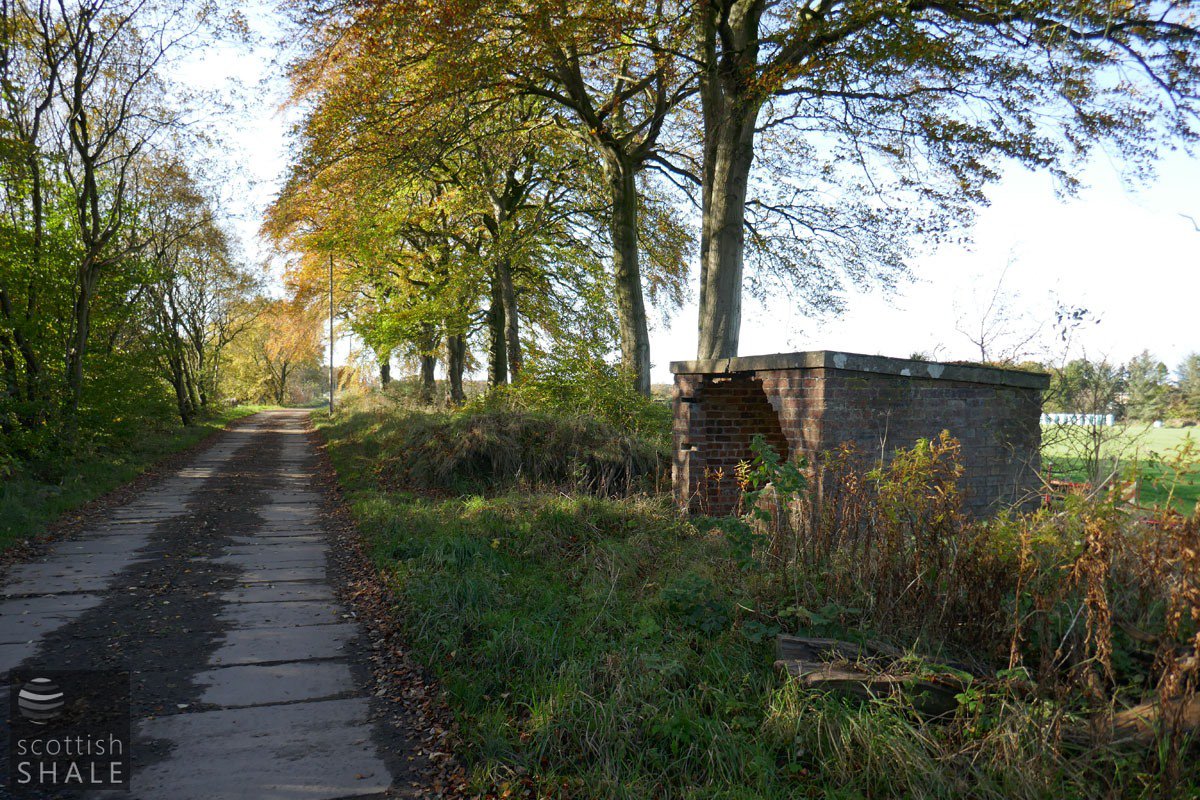 View of road from Mid Breich farm looking west. One row of houses would have fronted onto this road on the left of this image side. The brick structure seems likely to have been associated with these buildings. 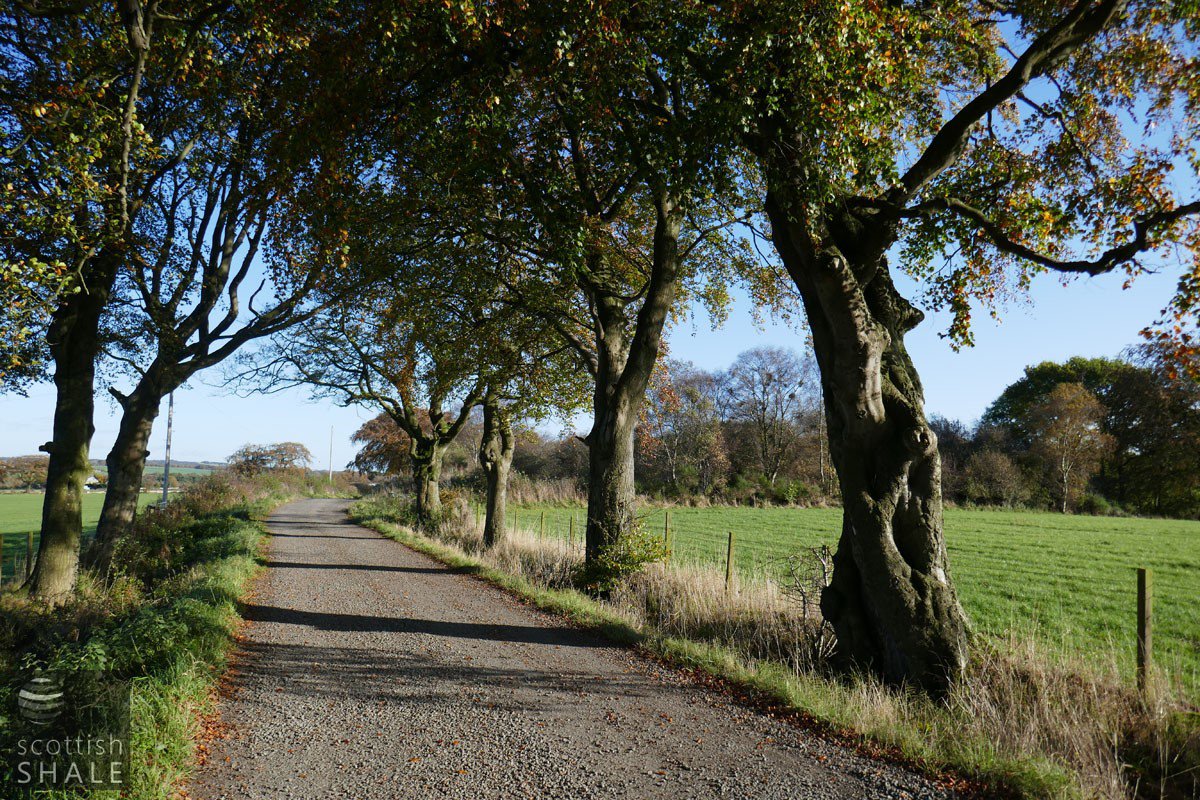 The road to Mid Breich farm looking East, the mound within the trees marks the site of No.4 pit. The village lay beyond this. 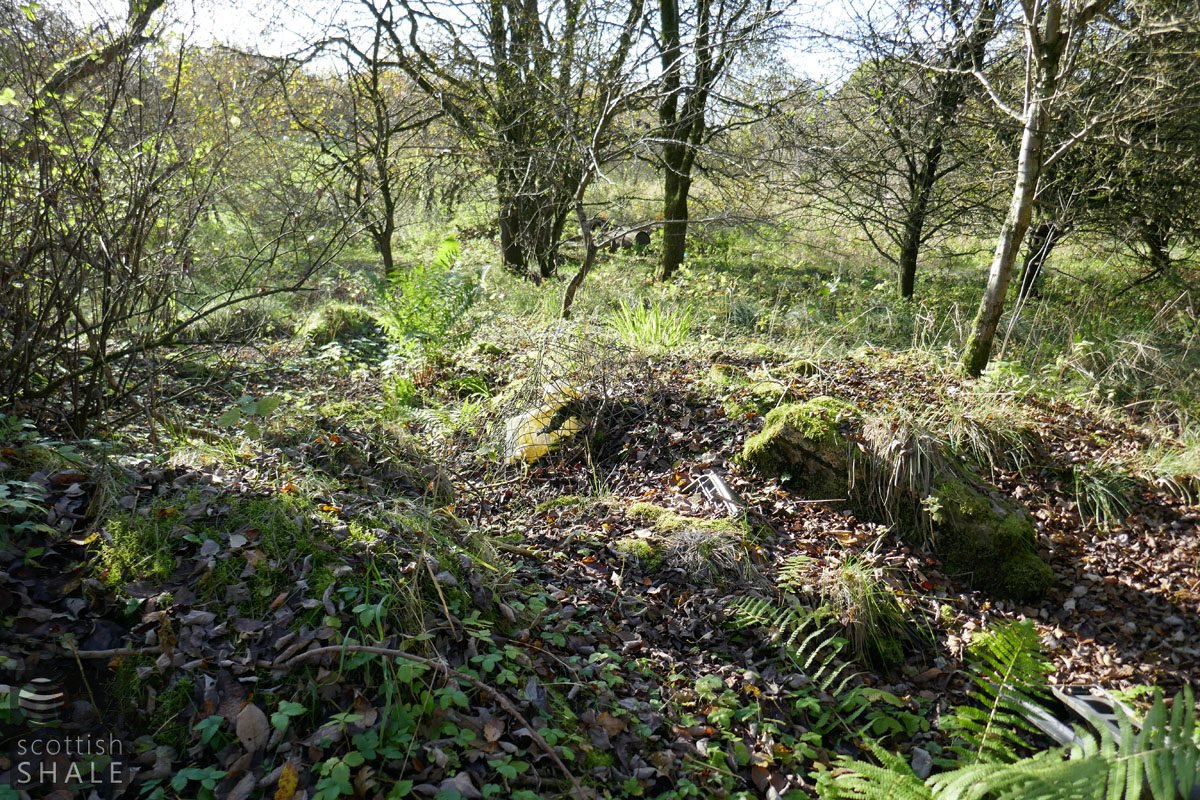 Heaps of building rubble beneath the trees mark the site of Mid Breich rows. 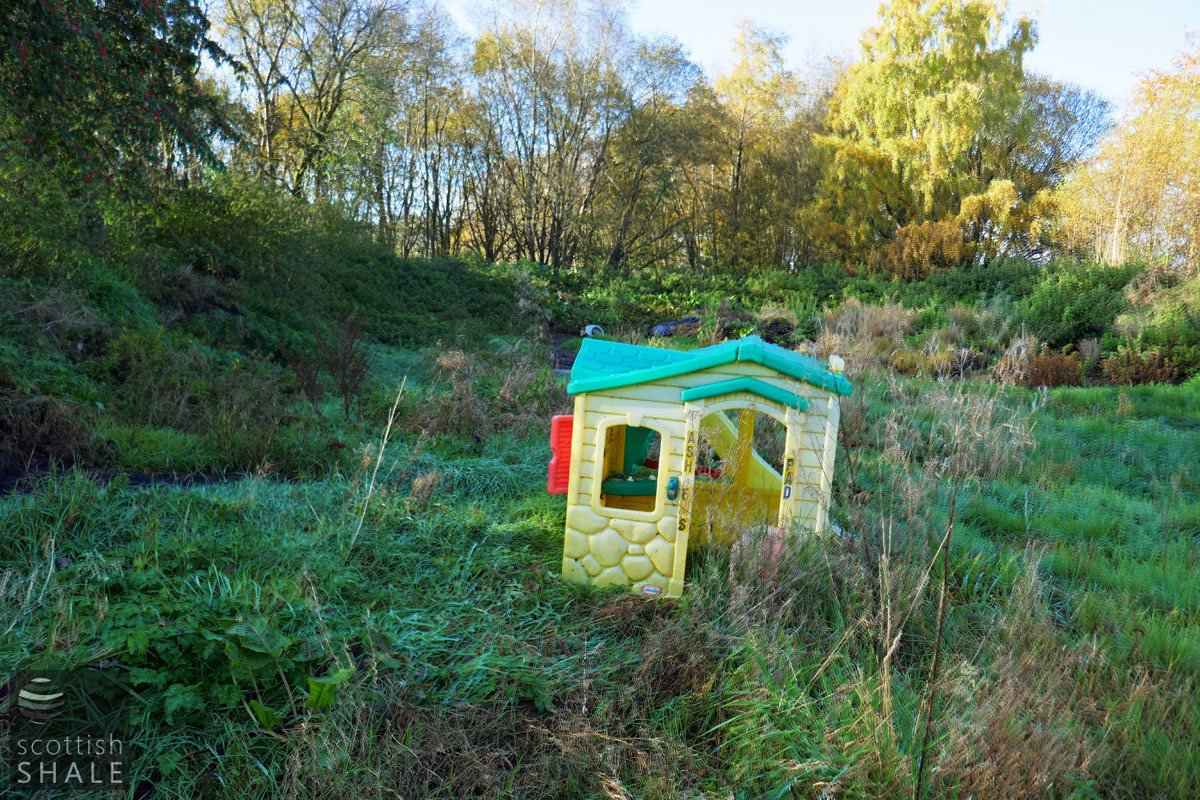 The last house in Mid Breich - close to the site of the Pumpherston Oil Co. rows.