The Almond Bridge and Bridgend area of Midcalder. 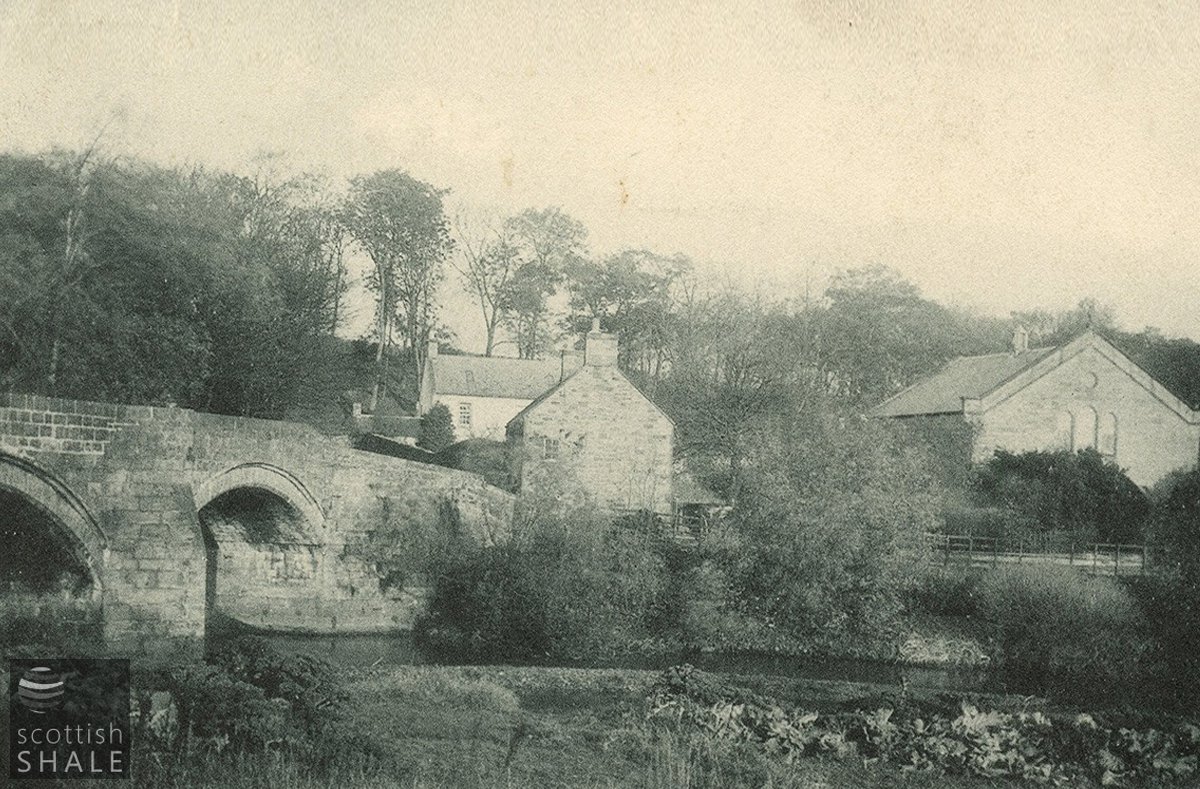 The old North bridge, church and manse, c.1905 viewed from the south of the Almond. 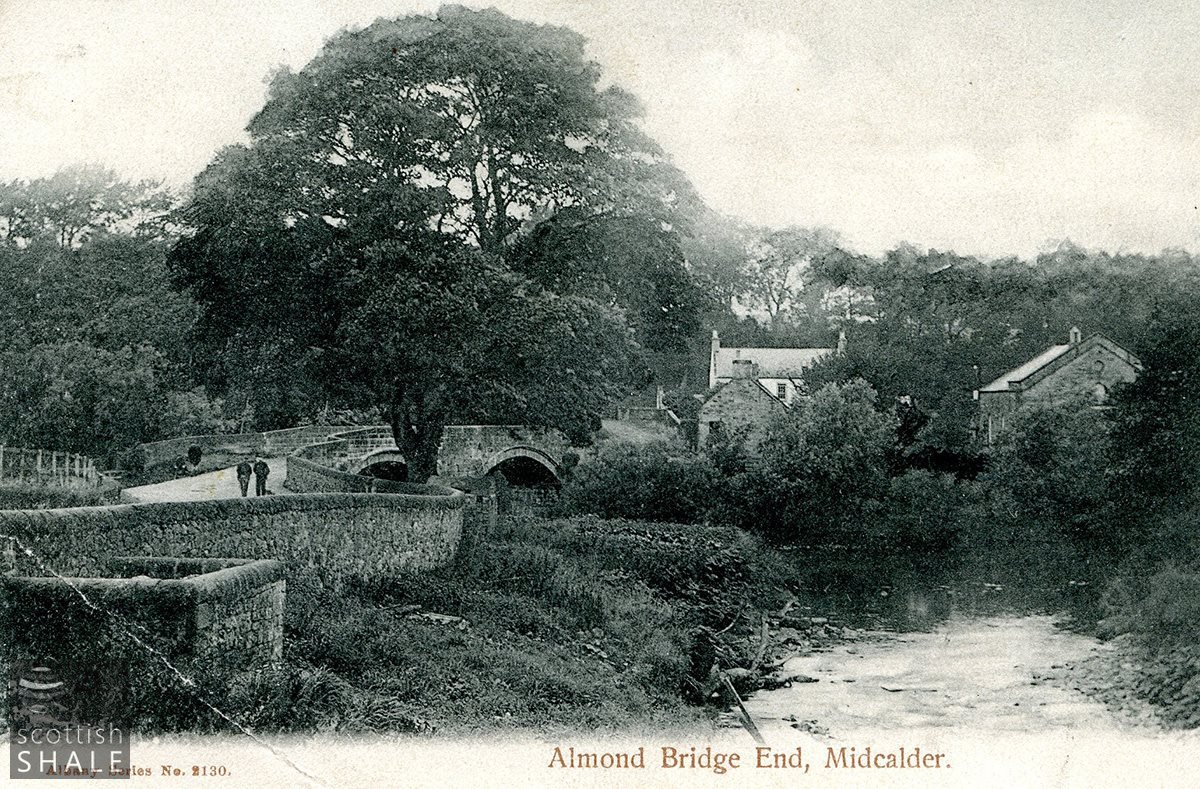 The old North bridge, church and manse, c.1905 viewed from the south of the Almond.

Since the earliest records, the village of Mid Calder has boasted two bridges; a crossing of the Linnhouse water carrying the road to Edinburgh, and the North Bridge across the River Almond, carrying a road northward past Pumpherston towards Houstoun house. Both are shown on the earliest detailed map of the Lothians surveyed by Timothy Pont in about 1636.

The old bridge across the Linnhouse water was replaced by the present substantial stone bridge in about 1795 and carried the great turnpike road between Edinburgh and Glasgow. Mid Calder’s old North bridge however, continued to be an obstacle to traffic well into the 20th century.

From its junction with Bank Street, Pumpherston Road heads north and downhill to the River Almond which was once crossed by a twin-arched stone bridge, only wide enough for a single cart to pass. Immediately north of the bridge (an area known as Bridge-end), Powies Path heads eastward towards Drumshoreland while the road carries on across the narrow haugh, turns at right angles and climbs a steep brae out of the river valley.

The area of the Bridge-end is mentioned in documents as early as 1563, and “Bridgend” and “Powispath” are recorded in various 17th century records. Advertisements during 1761 and 1762, sought offers for “all and hail these haughs and braes of ground with houses built thereon, lying at the north end of the north bridge of Mid-calder”. This had been the property of the late James Moubray, excise officer at Mid-Calder. It seems that some or all of the lands were then purchased the congregation of the United Presbyterian Church, who set about the construction of a meeting-house, raising funds by public subscription. Worshipers who had left the “established” Church of Scotland following the secession of 1733 had previously held their services in the open air on the haugh-land at Bridge-End. 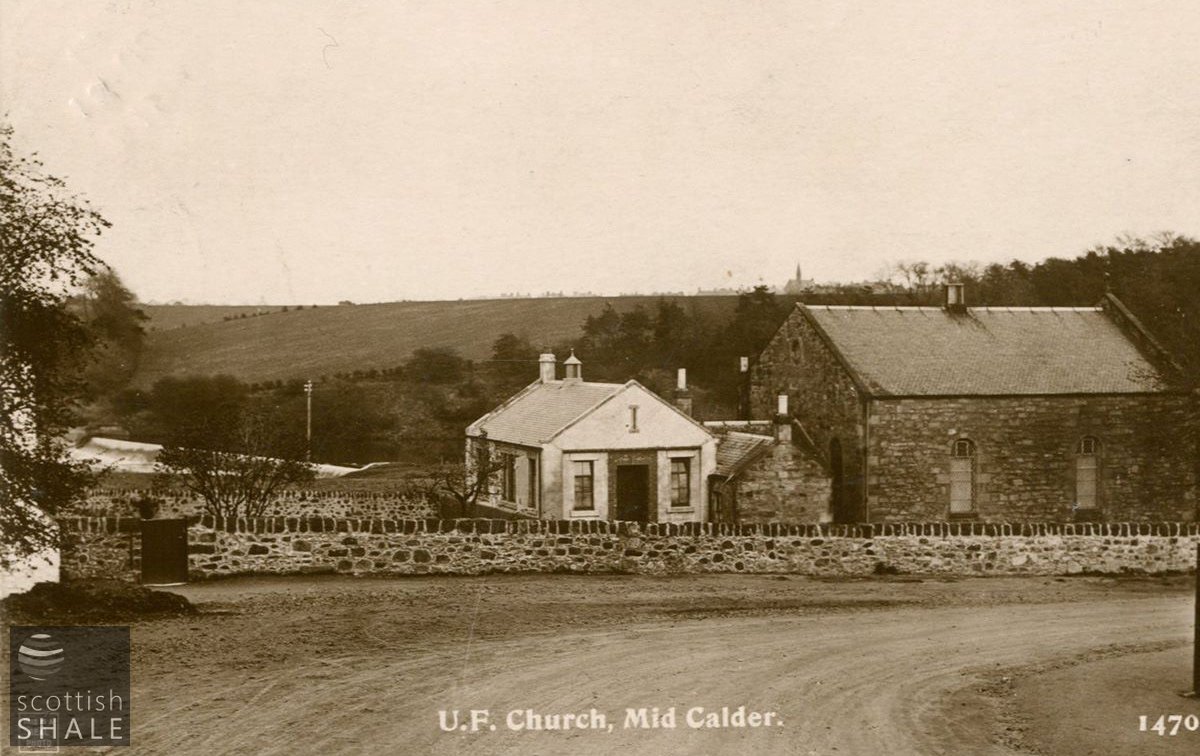 Church and hall, looking east with East Calder on the skyline. 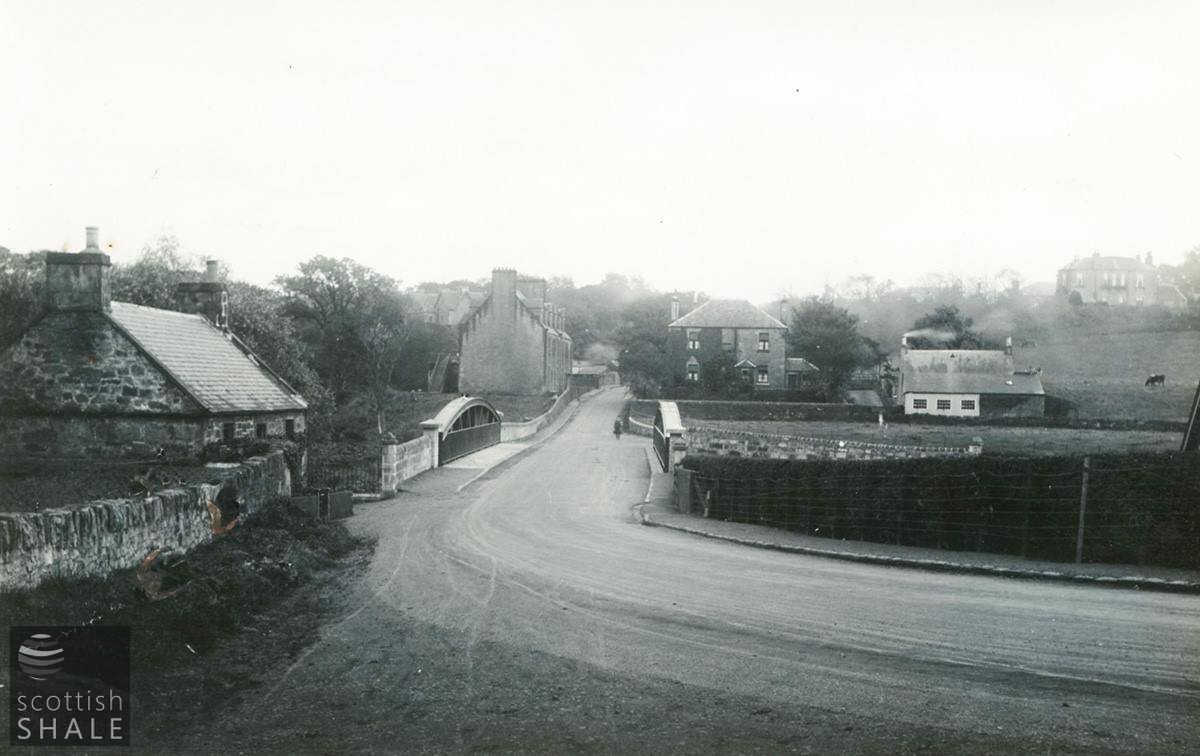 View towards Midcalder c.1929, following installation of the new bridge. The site of the Glen Almond tenements (to the left, across river) is now a car park for Almondell & Calderwood Country Park.

The first edition OS map, surveyed in 1853, shows a little knot of buildings on the north side of the Almond at Bridge-end, including a modest building labelled “United Presbyterian Church” (said to seat a congregation of 400), along with associated manse and glebe. There was also a row of five or six cottages with, at the western end, a toll gate controlling access onto the great turnpike road. Control of the gate was part of the duties of those collecting tolls at Combfoot (Howden Bridge).

Some time later, perhaps during the 1860’s, the church seems to have been rebuilt or greatly extended. Speaking in 1868, local landowner and MP Peter M’Lagan reported, “A most flourishing church is the (Presbyterian) church or congregation at Mid-Calder, and I happy to say that all the buildings of that church are on my estate, and I am on the most friendly terms with the congregation. Indeed, we live at Mid-Calder most harmoniously, and when their church was being built, the Established congregation put at their disposal their church, and when the repairs in the Established Church were going on, this was reciprocated to them by their offering their neighbours their neat and comfortable church”. (Cheers.)

The steep brae, sharp corners and narrow bridge made Bridge-end the scene of many traffic accidents despite work carried out to ease corners and gradients during the period of horse transport. Matters got worse with the rise of the motorist, and it was complained that “the bridge is so narrow that one vehicle alone is all that can pass over it at a time and even then there is no room for pedestrians; in fact safety pockets are built at intervals for the use of pedestrians caught on the bridge by a vehicle”. “The approach from each side is down steep hills and in addition a clear view to either side cannot be obtained.”. In 1924 Midlothian County Council bowed to public pressure, demolishing the ancient stone bridge and replacing this with a single span bow-arched steel structure, constructed by William Arrol & Co. at a cost of £6,175.

The Bridge-end church survived into the 1960’s (at least), and the site is now a pleasant garden. The impressive manse, continues to provide a comfortable home. 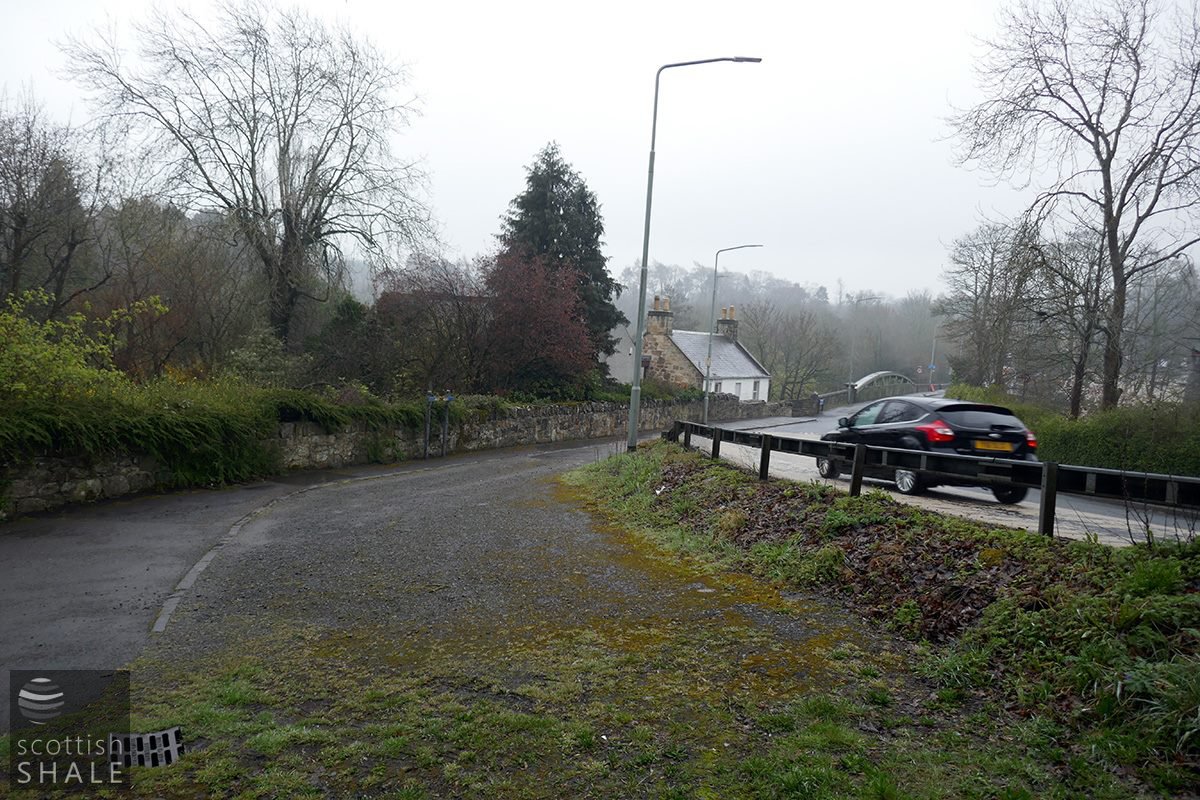 The original and realigned course of the road to the north of the bridge. 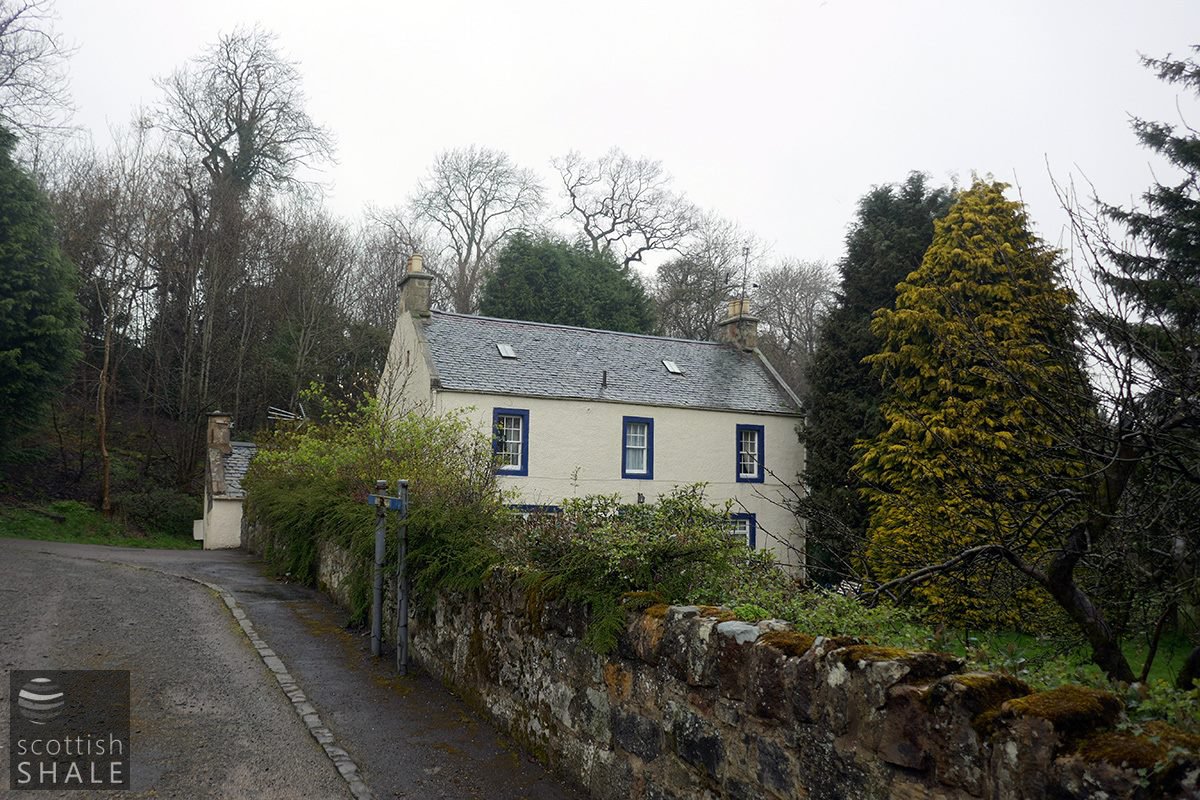 The former U.P. Manse and its glebe. 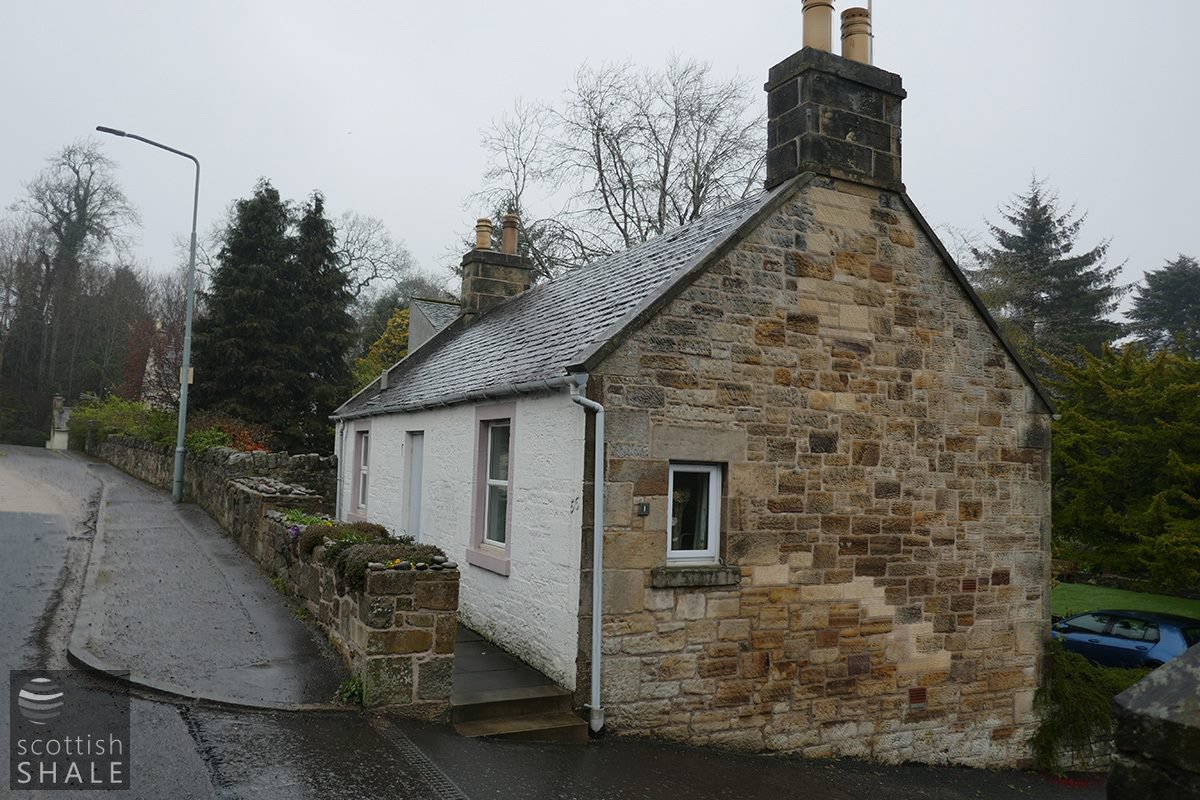 19th cottage on the corner of Powie’s path, on the site of the old toll bar. 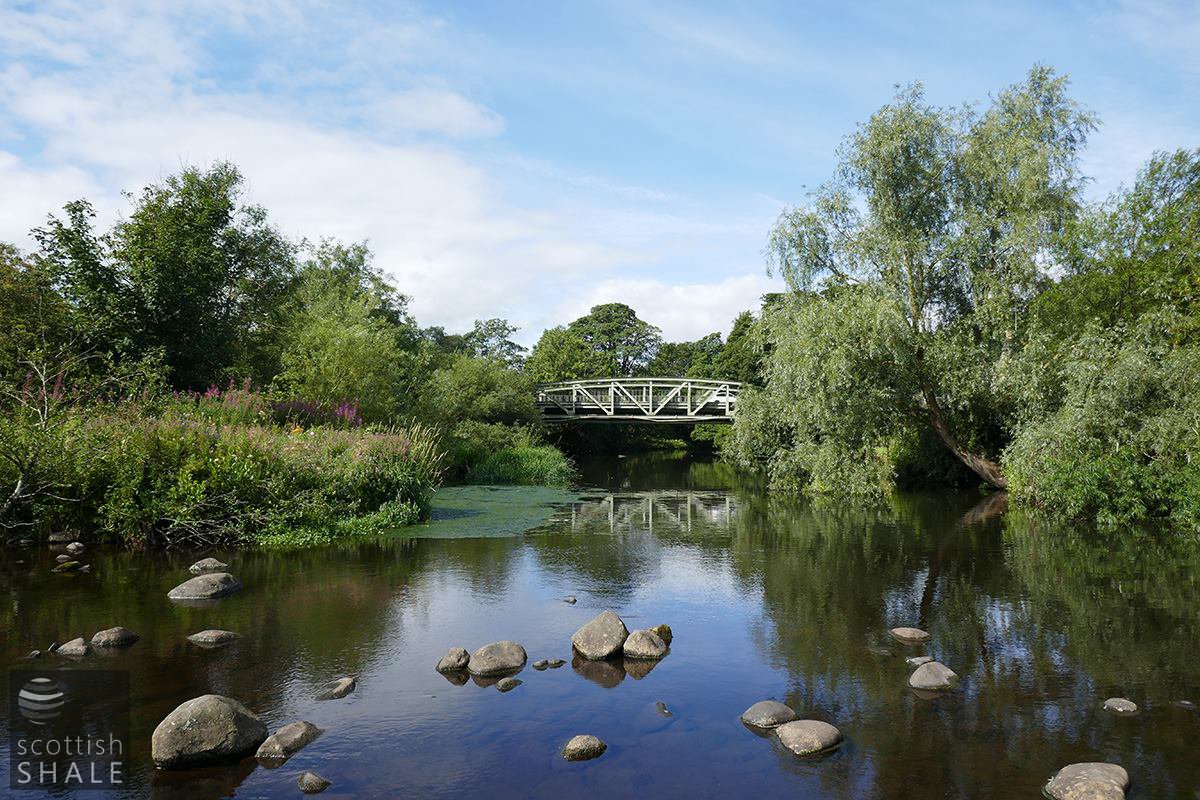 The 1924 steel bridge viewed from down river.
Photographed last summer. 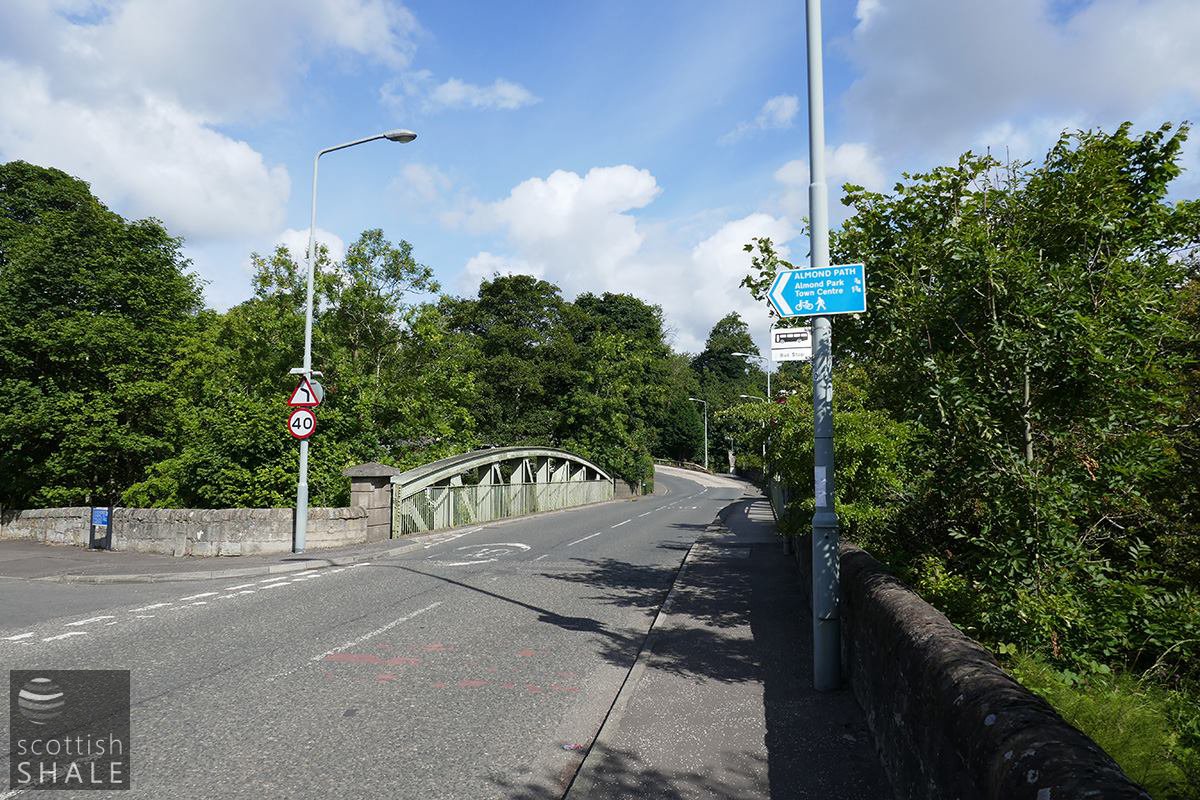 Looking north across the bridge. 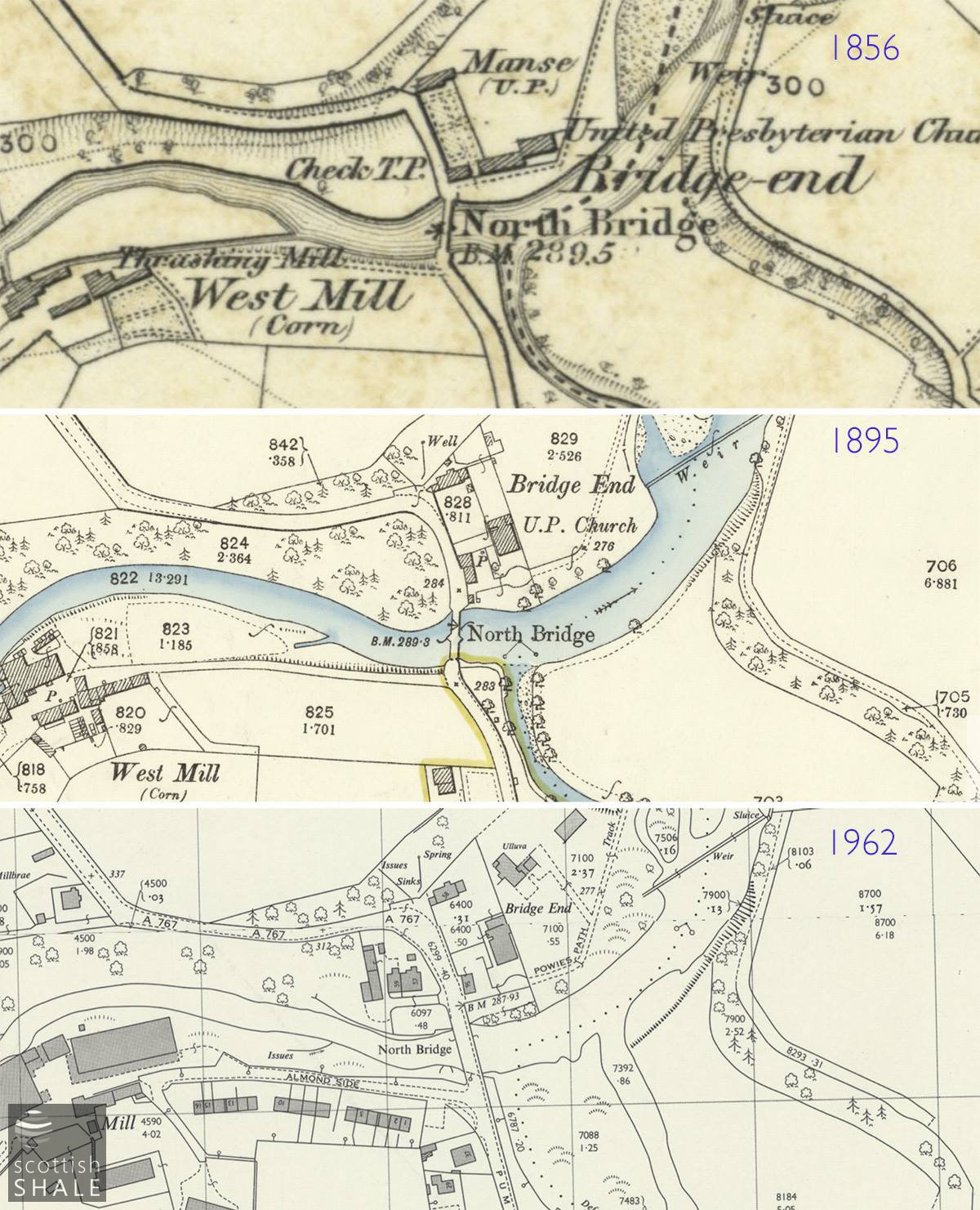 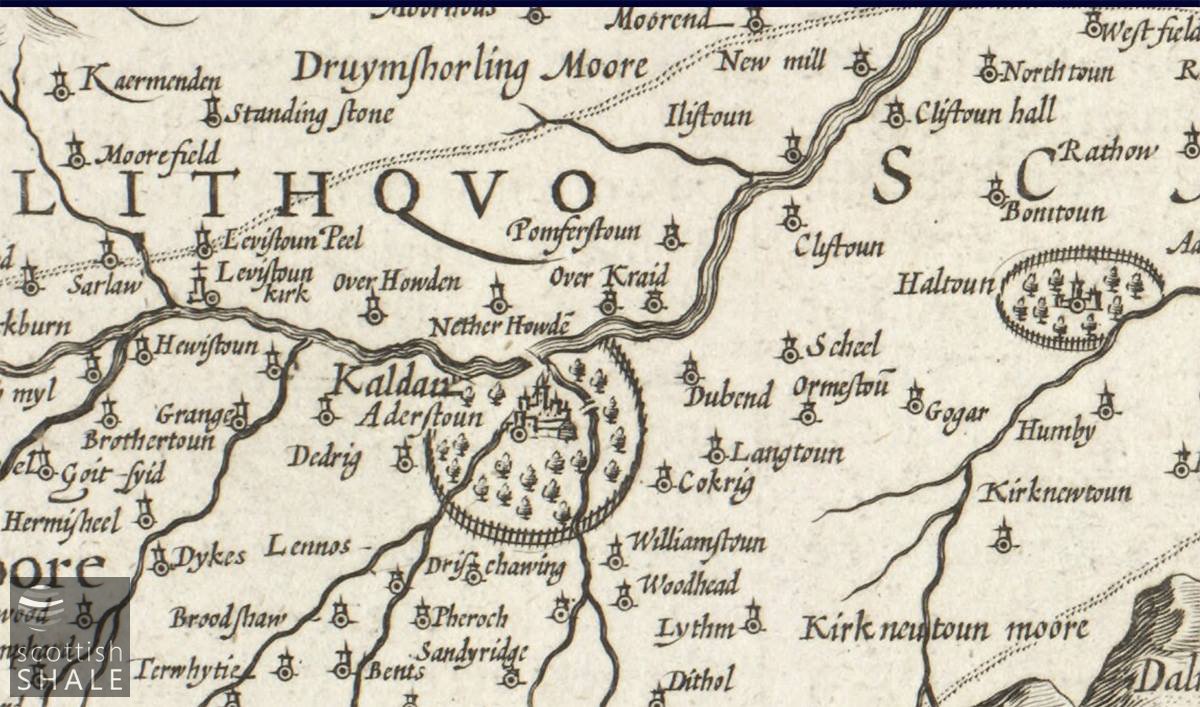 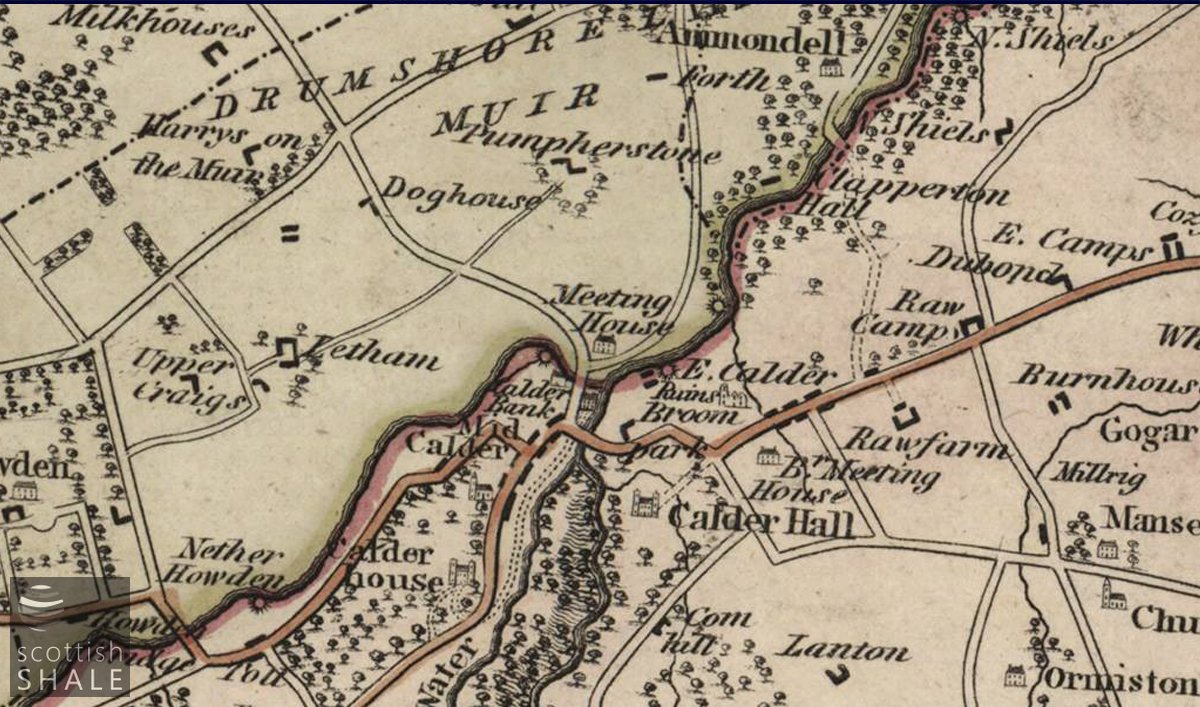