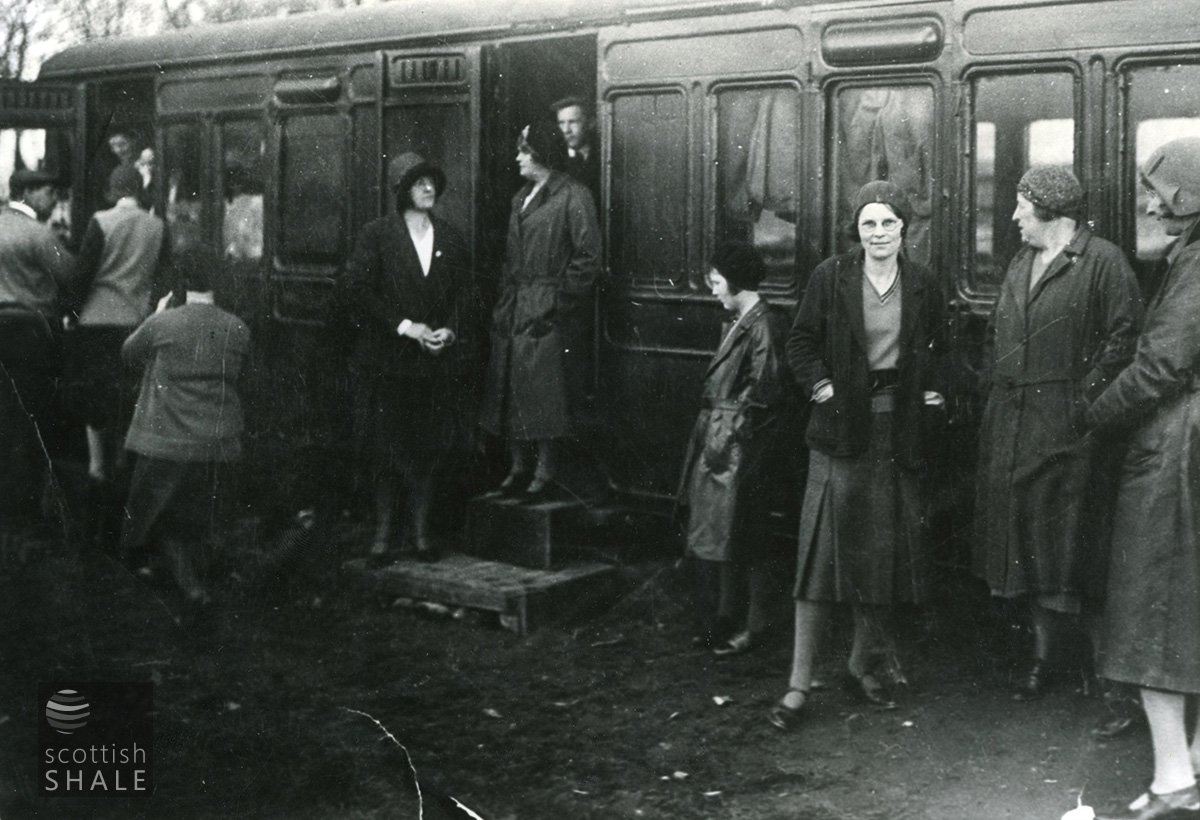 Presumably the old railway carriage body purchased by Livingston Golf Club in 1924 to serve as a club house. It appears to have originated with the North British Railway. 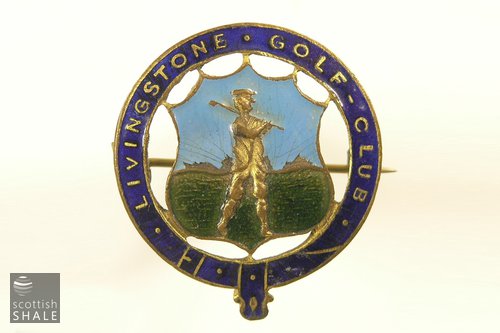 Speaking in 1910, James Bryson of the Pumpherston oil company described golf as “the finest of outdoor games”, and “of special merit in being suitable for men, women and children”. In a period of prosperity for the shale oil industry, the Pumpherston company tried to ensure that their staff enjoyed decent housing with good social and leisure facilities, and encouraged activities that promoted a healthy and productive workforce. Works institutes, bowling greens and other amenities had been constructed in the company villages of Seafield and Livingston Station, and in 1911, the company was happy to support plans for a golf course serving the two communities along with the nearby villages of Blackburn and Livingston. Senior oil company managers, and the local MP, were appointed Honorary presidents of the new Livingston (or Livingstone) golf club. At an inaugural meeting, a letter from Bathgate golf club was read out, encouraging residents of Livingston parish to join the established Bathgate club. The meeting decided to politely “thank the Bathgate club for their kindness, but not to join them in the meantime”.

The new club instead negotiated with Robert Buchanan to lease land near Livingston Toll that formed part of Livingston Mill Farm. A rough course of nine holes, extending over twenty acres, was opened in April 191l. Great effort went into raising funds to develop the course including an “at home” event held in Livingston Station institute the following year. At this “brilliant assembly”, the great and good of the district were invited to enjoy songs and dancing in the extravagantly decorated hall, and dine on “provisioning supplied by Bathgate Cooperative Society”.

This happy progress continued well into World War One, but in 1916 it was agreed “in view of the large number of members who are serving in His Majesty's Forces, and the general lack of interest in the game owing to the war,…...to close the course till more normal times”.

The club was re-started in May 1919, with annual subscriptions set at 10 shillings for gents, 5s for youths under 16, and 3s for ladies. The tradition of an annual whist drive and dance in Livingston Station Institute was re-established. While perhaps lacking a little of the grandeur of the pre-war balls, this annual jolly became the social highlight for golf club members, and raised funds to maintain and develop the course. Women seem to have been well represented within the membership, with separate gents and ladies committees having their own elected officials – although it was reported that following one meeting that “the ladies' section entertained the gentleman's section to a splendid tea”. Competitions often began with the “mixed fours”, and it might be imagined that many romances blossomed on the greens. 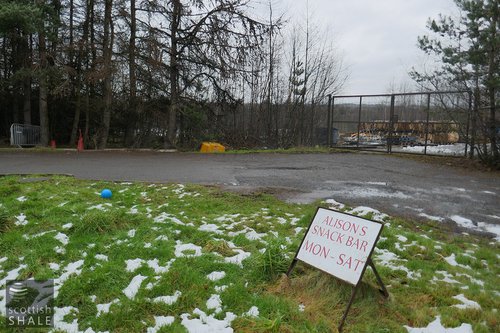 The original course offered little challenge to the experienced player and in 1921 it was extended to a further field, giving greater distance between greens and making play more interesting. Despite this extension, the club decided to develop a new course at Barracks farm, a little to the north of the Livingston toll site, which was said to “have quite a number of natural obstacles that should make the course a good one”. New mowers were acquired to maintain greens and fairways, under the supervision of Mr. Dewar, who also maintained the Livingston Station bowling greens.

After only two years, the Barracks Farm course was deemed “quite unsuitable for play”, and was inconveniently placed for members travelling from Seafield and places west, A “mutual and satisfactory settlement” was then reached with Robert Buchanan allowing the club to return to the old Livingston Toll site, where new greens were established.

In the early days of the club, a competition was usually followed by a brisk walk to the Livingston Station Institute for tea, and sometimes a dance afterwards. In 1924 it was agreed to purchase “a suitable shelter or pavilion” and soon an old railway carriage was acquired which it was reported, “members are making look spick and span with paint and necessary attention”. Following this, many AGMs were held in the “club-house” rather than the Institute. A new club house was opened in 1934, and in 1937 funds were being raised to install a water supply; it being explained that “for some time additions have been made to the present club-house by way of cloakroom facilities and a small kitchenette”.
During the great depression, following closure of much of the shale oil industry, there was question over whether the club should continue. However at the 1932 AGM it was decided to continue “despite the depressing circumstances prevailing in the district” as the game “would help pass the time for may who are otherwise unemployed”. 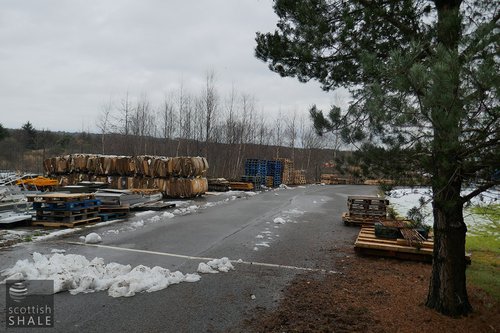 The future of the club was again put in doubt following the outbreak of World War Two. The usual annual whist drive and dance took place early in 1940, at which it reported that the military had not yet taken over the club-house, as had been expected, but the lower field of the course had been ploughed up, With a stiff upper lip, it was stated that the club “still had use of the top field next to the clubhouse, although not providing scope for the long hitter, this provided a course for the ordinary player”. In October 1940 it was resolved to “wind-up affairs for the duration of the war due to the scarcity of members”.

After the war, former members of the Livingston Golf Club competed in the Linlithgowshire golf association, although without a home course. Further efforts were made to re-form the club in 1949, and a lease was agreed for land at Barracks farm, however it seems that these plans came to nothing.

A few maps produced between the wars have the words “golf course” emblazoned across a couple of fields near Livingston Toll, now mainly covered by the Shin Etsu wafer factory. Little is known about the layout of the courses in their various forms, or the location of the old railway carriage where cloche-hatted ladies once supped tea in the summer sunshine.

Location of the Livingston toll golf course, conveniently placed between Seafield, Livingston Station and Livingston. Barracks farm lies a little to the north.
Map courtesy of National Library of Scotland. 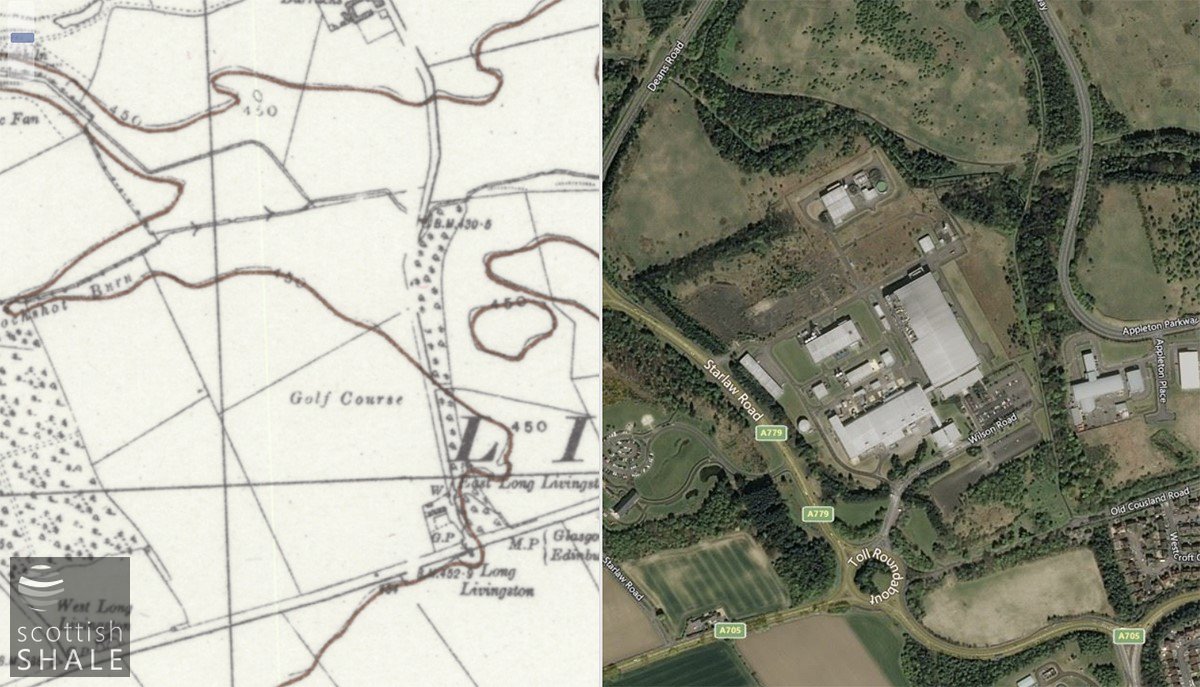 Golf course and the current site of the Shin Etsu factory.
Maps courtesy of National Library of Scotland. 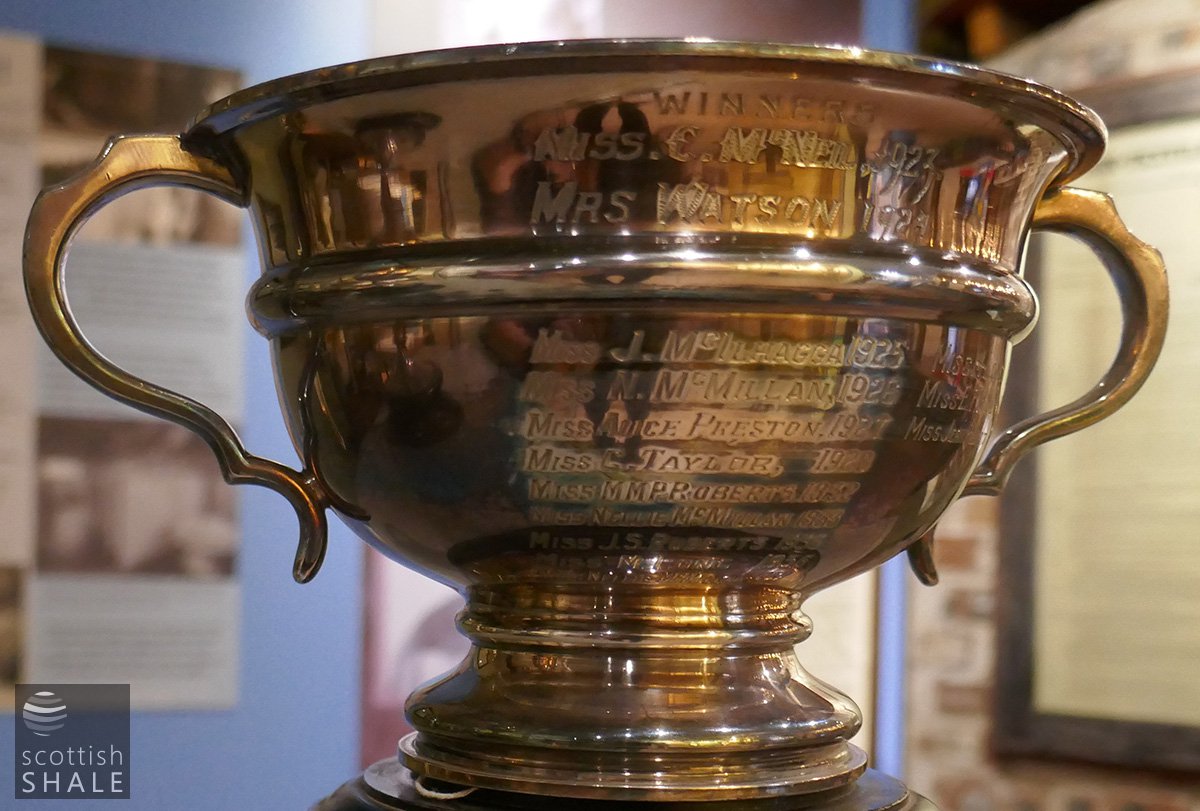 Winners of the Ladies prize, engraved annually until the outbreak of war. 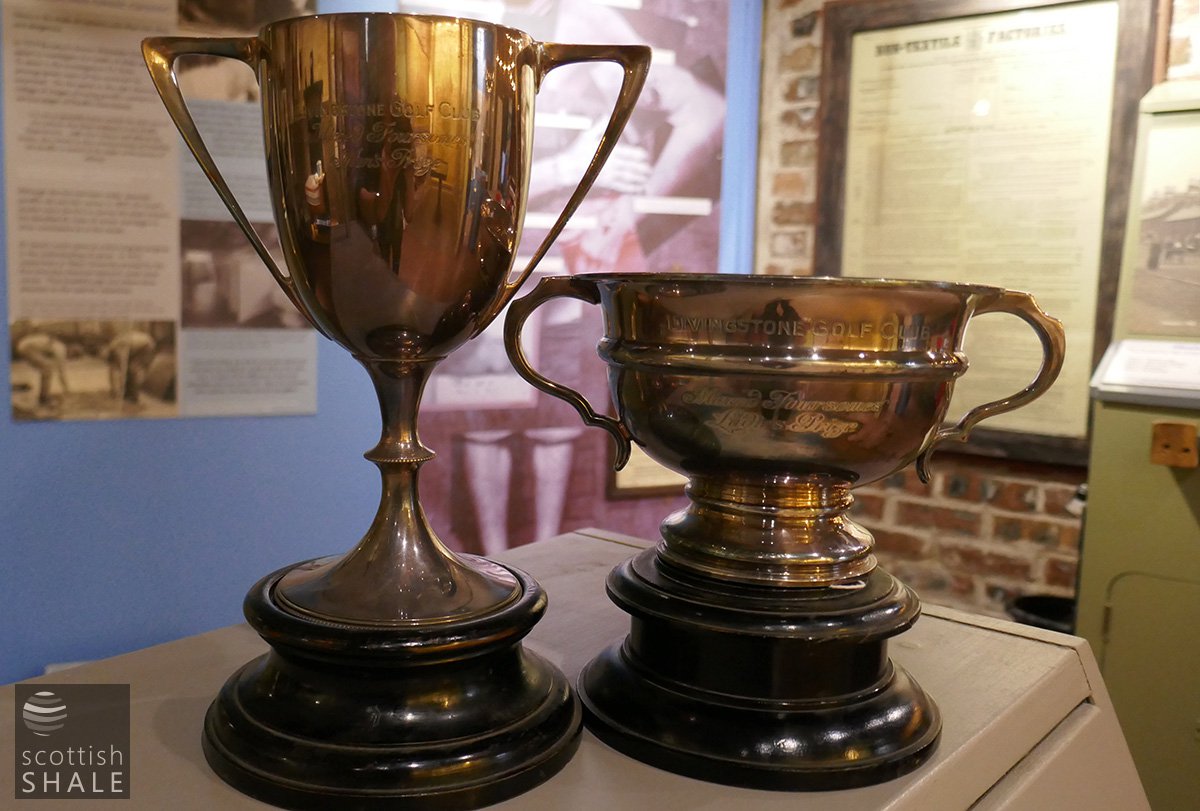 Mixed foursomes gentleman's prize and lady's prize, from our collection. 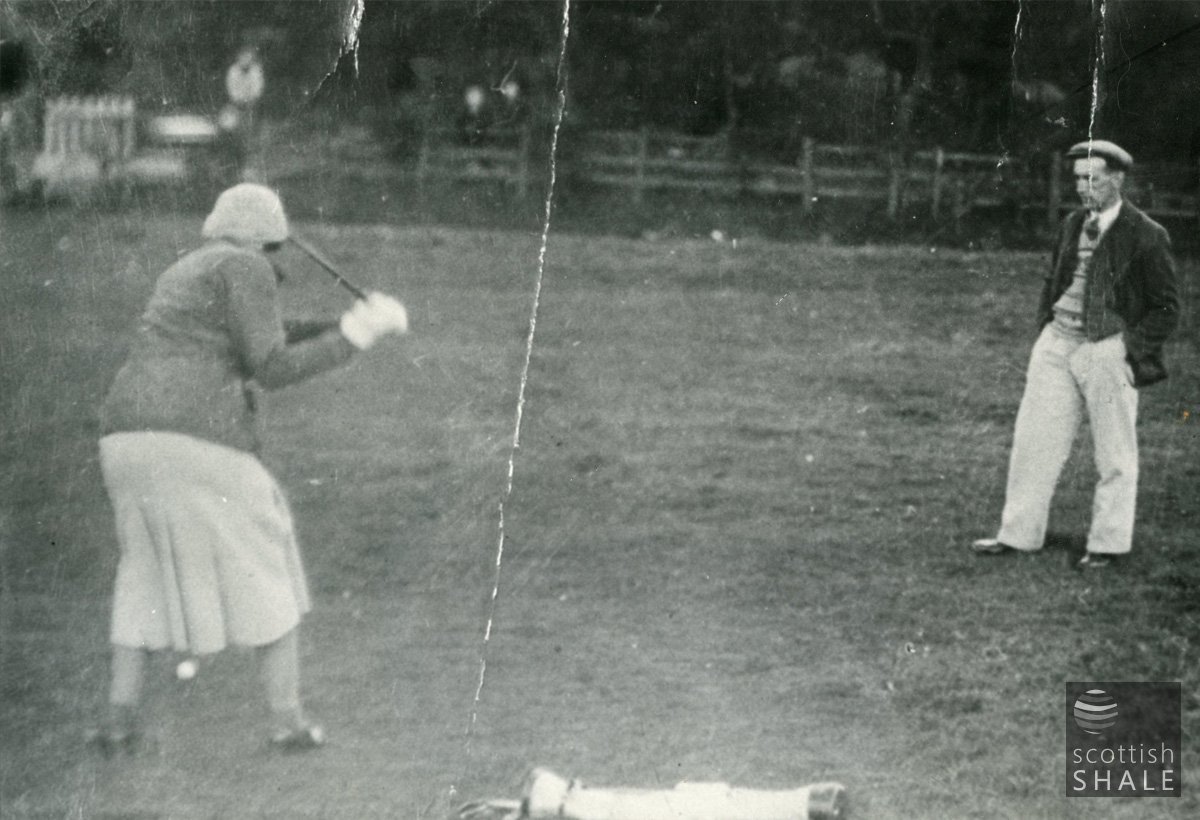 Golf in a cloche hat