Nights Out in the West End 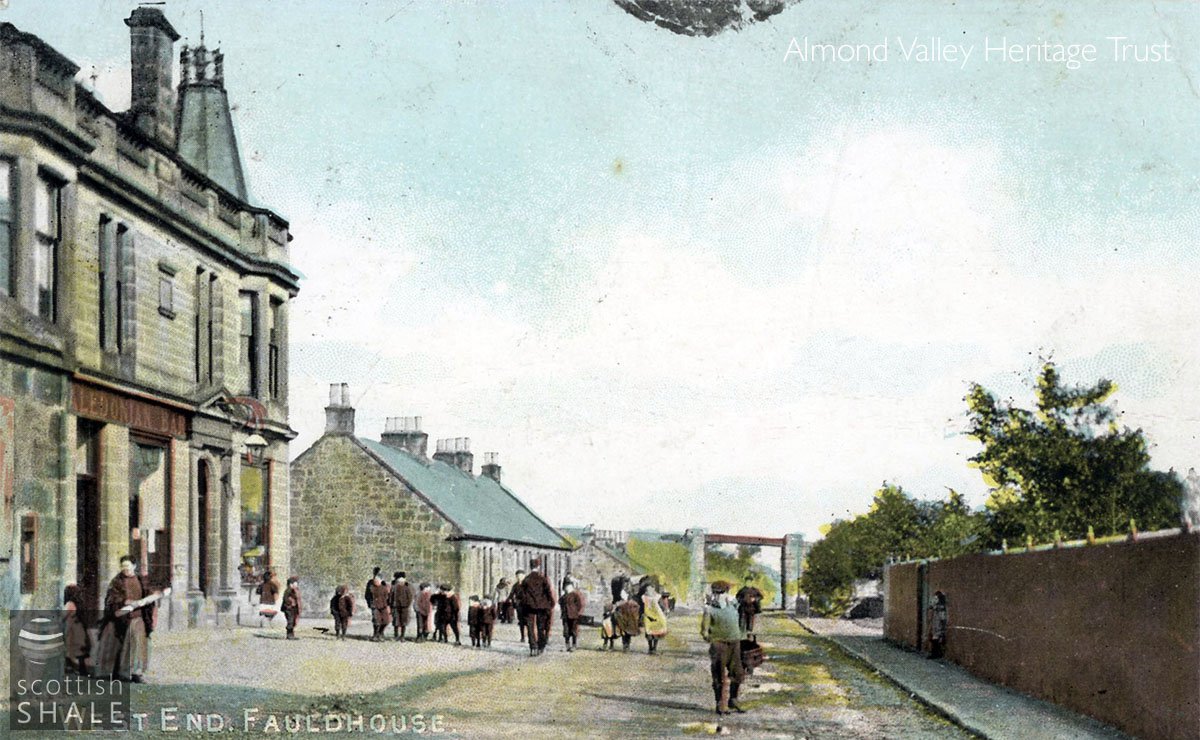 The Caledonian bar, hotel entrance, and shop on the corner, plus a team of local weans. 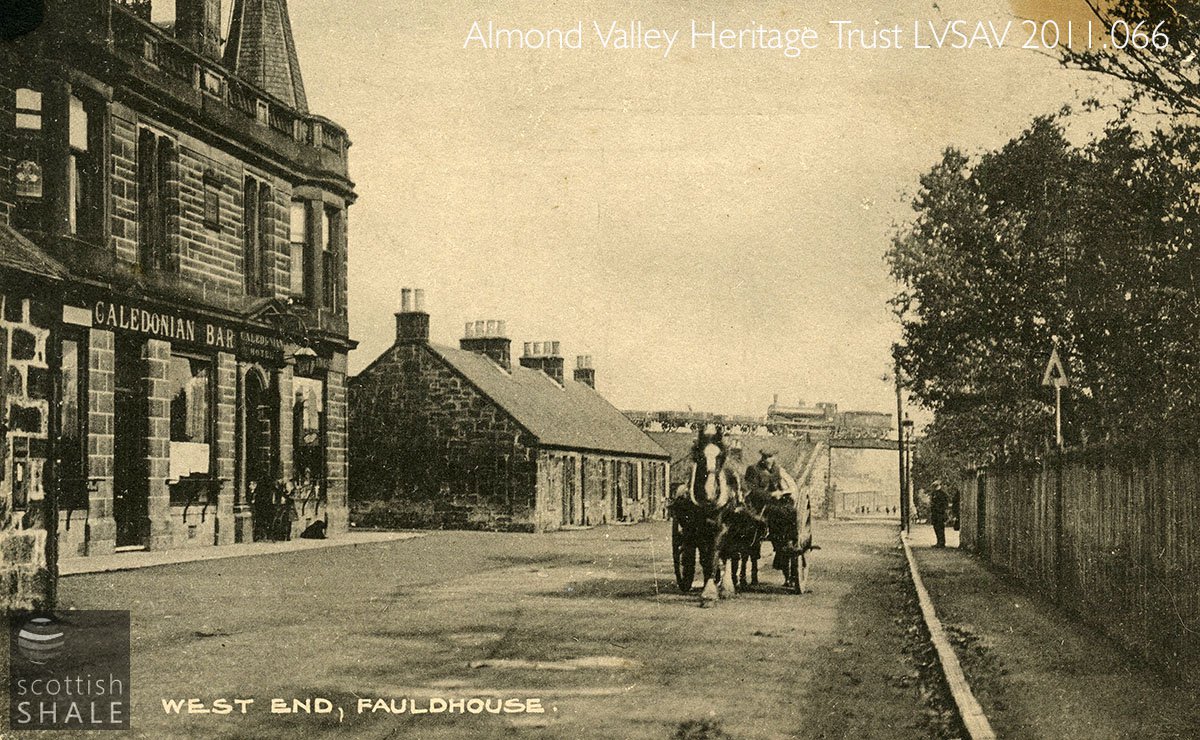 A North British Railway locomotive crosses the road with a train on the East Benhar branch. 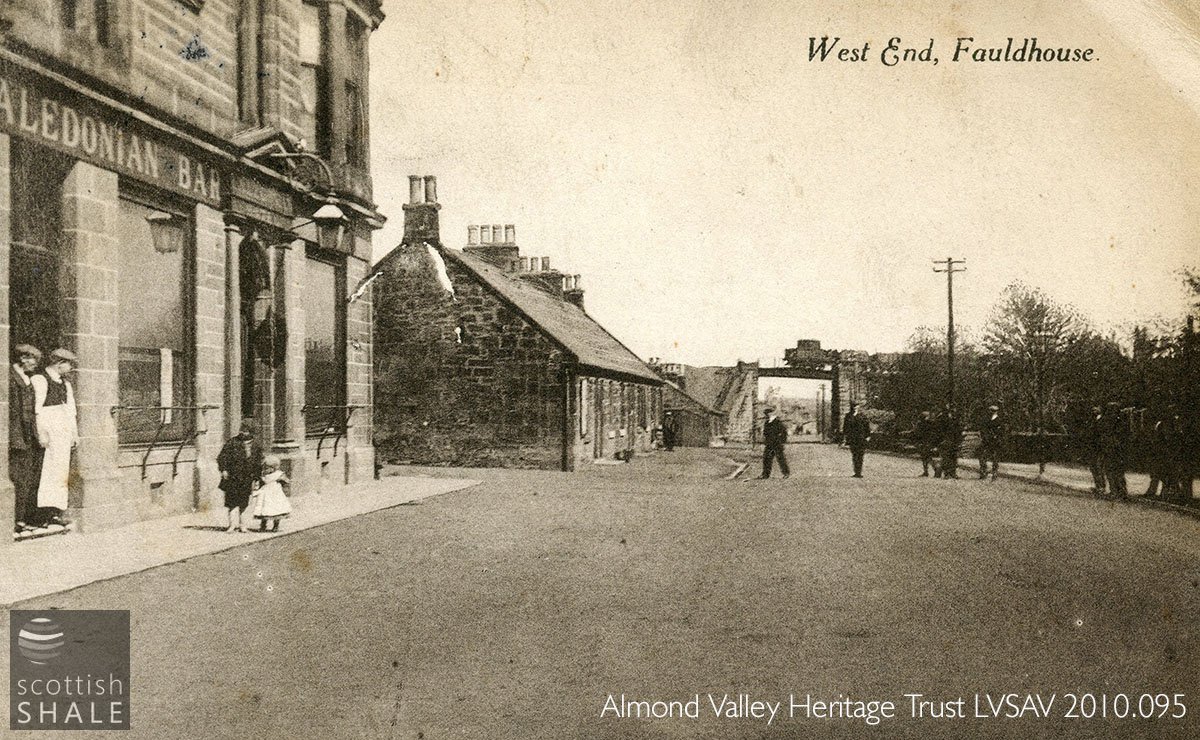 Another photo, another train.
Until the 1890's a level crossing ran obliquely across the road at about the location where the men are standing, linking the Fauldhouse Collieries to the Caledonian Railway.

The West End area of Fauldhouse was blessed with a railway station connecting to Scotland's major cities, and the district's only hotel; built to serve those travelling on business to this once thriving industrial village. The hotel, and the neat layout of miners rows that surrounded it, was the subject of a surprising number of picture postcards. These help you journey in the imagination between the streets and rows, even though little of these scenes now survive.

The village of Fauldhouse grew up around a handful of settlements created in the mid 19th century to serve the iron and coal mining industries. In the 1850's the area around West End was still open countryside. The only features marked on the earliest ordnance survey map were twelve cottages, perhaps built to house agricultural workers, and the route of a mineral tramway. This primitive form of horse-hauled railway was built in the 1840's to carry coal from the Benhar pits to the Wilsontown, Coltness and Morningside railway (later part of the North British).

Fauldhouse grew quickly during the 1860's and 70's with the development of mining and quarrying industries. The Caledonian Railway's new route between Edinburgh and Glasgow, opened in 1869, swept through the area, and was quickly linked by branch lines to most major collieries. It's rival, the North British, constructed its East Benhar branch at about the same time, replacing the old mineral tramway, and further extended its sidings into centres of industry. The East Benhar route included construction of an iron bridge over Fauldhouse main street, which then separated West End from the Falla Rows and the rest of Fauldhouse to the east. 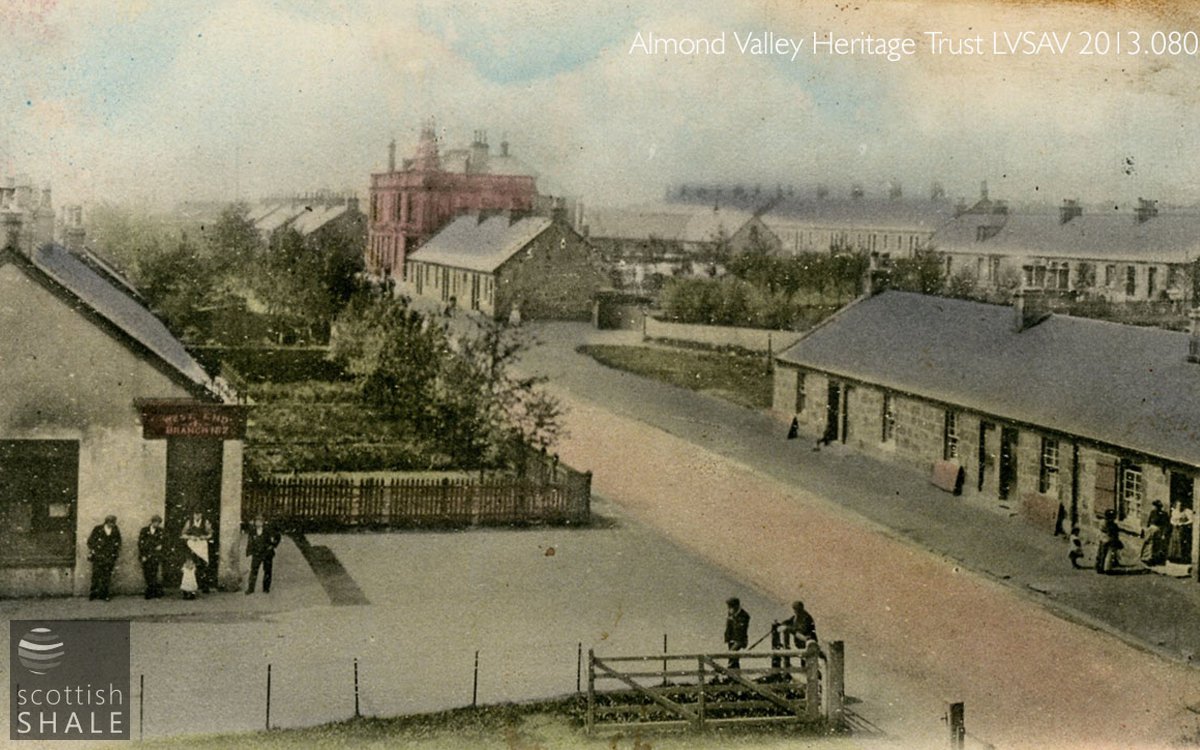 A view from the railway bridge carrying the East Benhar branch, looking west towards the Caledonian Hotel, fancifully hand-tinted in red. The row of houses beyond this were demolished prior to 1910. In the foreground is the Crofthead Cooperative Society's No.2 West End Branch, and at the bottom of the picture the gate leads to the Caledonian Railway's goods station. 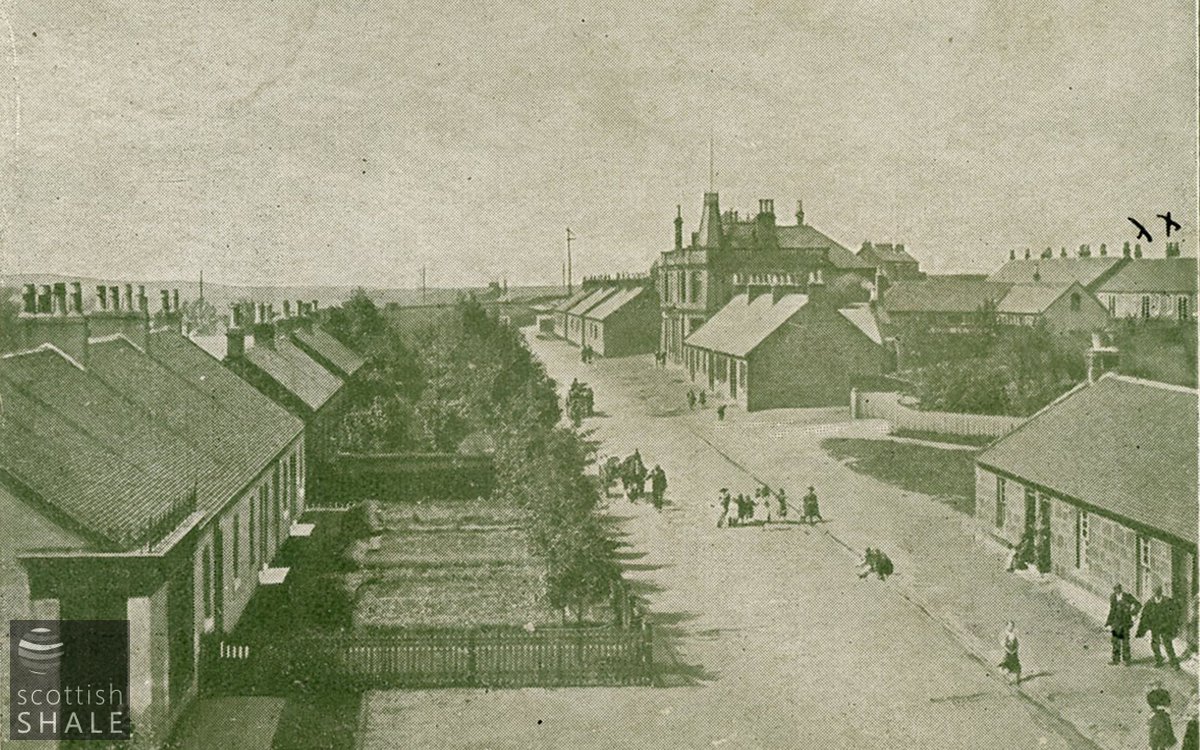 Another view from the bridge looking westward, with the signal post marking the location of the Caledonian railway station. 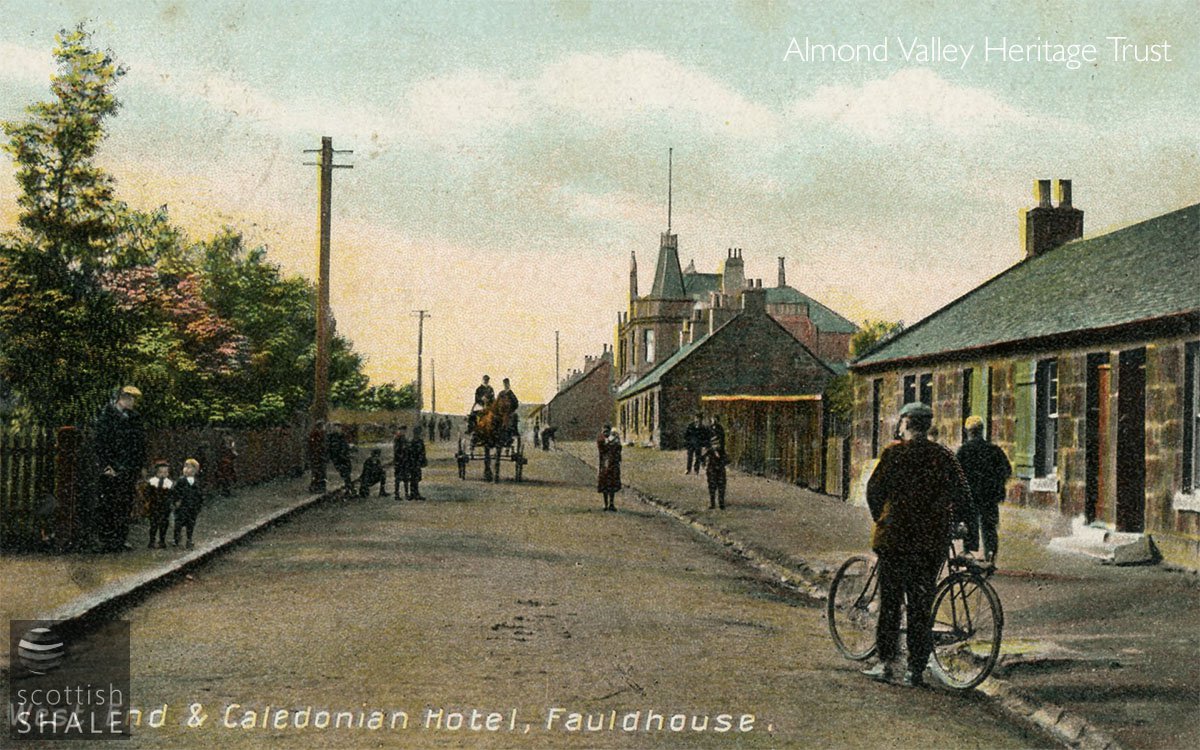 Looking west along Main St toward the Caledonian Hotel, with its turrets and flag pole.

Most of the solid rows of stone-built housing in West End were constructed by Thomas Thornton & Co. to house those working in the companies pits. Thornton's also operated a general store to supply the needs of the mining community. In 1895 Peter Thornton constructed an impressive Caledonian Hotel on a site conveniently close to the Caledonian railway station, but set between the single-story rows of workers housing. This impressive structure with ornate turrets, cost over £3,000 and provided eight bedrooms “in every way well fitted up… as a first class hotel”. There was ample stabling in a yard to the rear. At that time applications for hotel licences were strictly controlled and all applications were rigourous scrutinised, The licensing authorities, meeting in April 1896, were presented with two applications for the building, one for use as a hotel, and a second for use as a licence grocery should the first application be declined. A compelling case was put for granting the hotel licence, including a petition signed by 62 “commercial men” who testified “what a great convenience such a place would be.” A member of the licensing board also commented that he had visited the premises and was very much impressed with their suitability. The licence was granted to the manager, James Duncan, previously of the Rutland Hotel Bar, Edinburgh. Within a few years this was passed to Thomas Forsyth, who prior to that was manager of Thornton's provisions store. He was succeeded by his nephew, Thomas Forsyth junior, whose son, James Forsyth, took over the licence in 1934.

For many years the Caledonian was at the heart of commercial and social life in Fauldhouse, and was venue for many grand meetings and celebrations. Prior to 1910, the original row of houses at West End was cleared, leaving an unrestricted view between the Caledonian Hotel and the Caledonian Railway Company's station.

The fortunes of Fauldhouse, and those of hotel, declined following World War One. In 1938, the Chief Constable reported to the licensing court that “the whole premises were dingy and depressing and in need of some alteration”, and that the furnace used for heating the licensed premises “was not only unsightly but dangerous”. By that time much of the surrounding housing lay derelict or had been demolished. As new homes were built on these sites, the Caledonian Bar remained a popular hostelry although it seems, was not always appreciated by its neighbours. The Caledonian was damaged by fire in 1985, and finally called time in 1992.

The Caledonian was then converted into flats. Shorn of its balustrades and turrets, and painted a drab french gray, the once grand building now looks a little sad and down-at-heel. 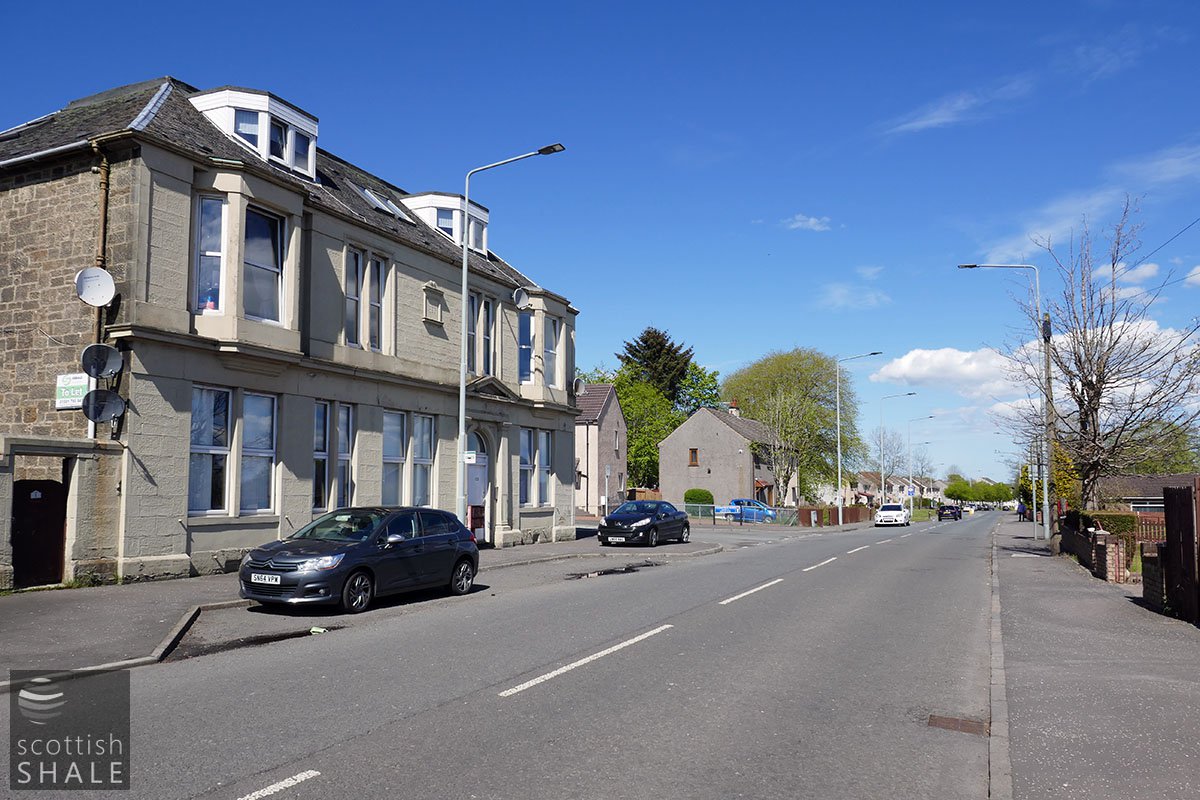 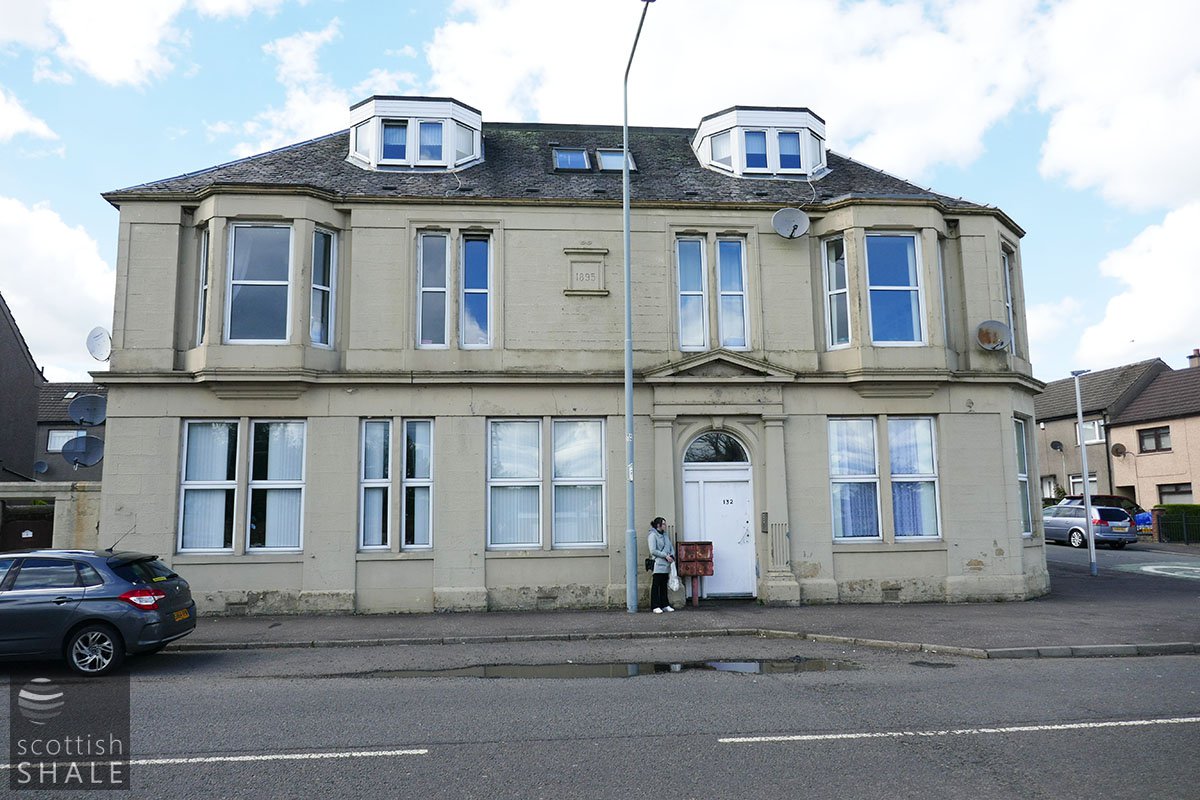 The Caledonian today, shorn of many of its decorative features. 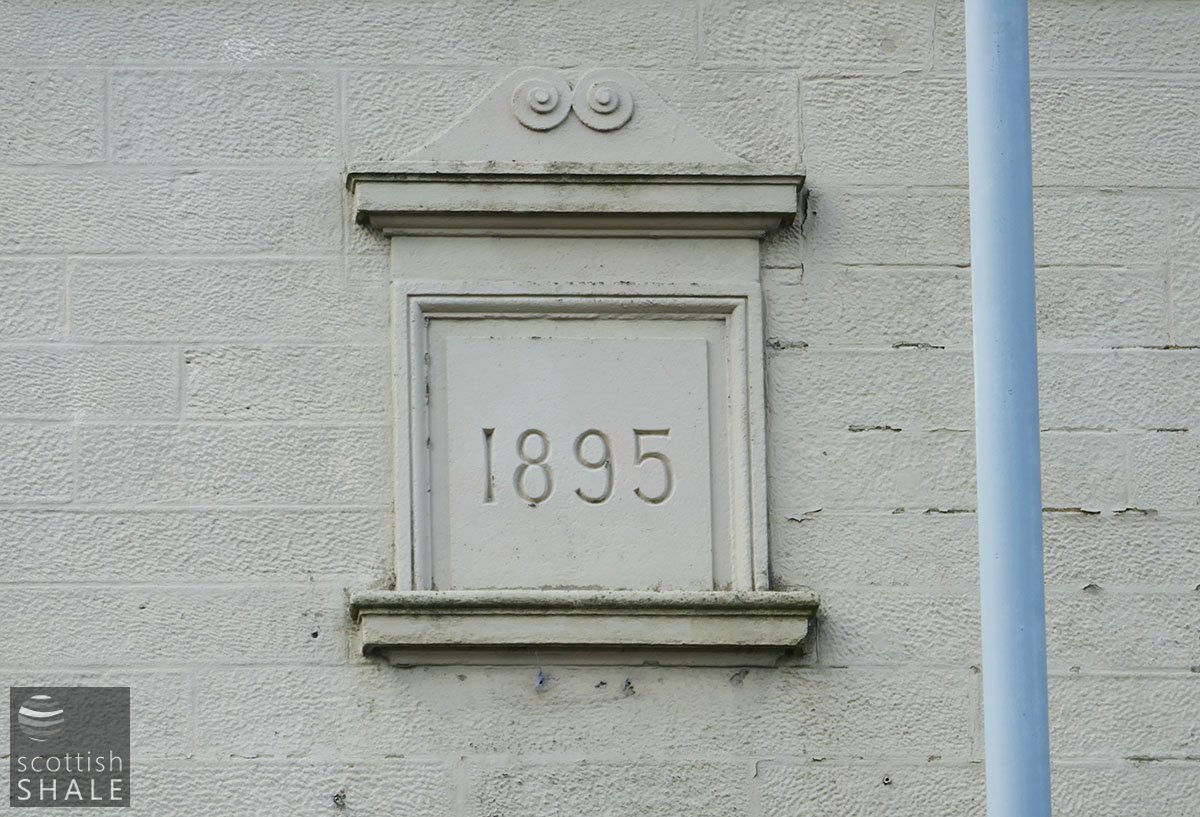 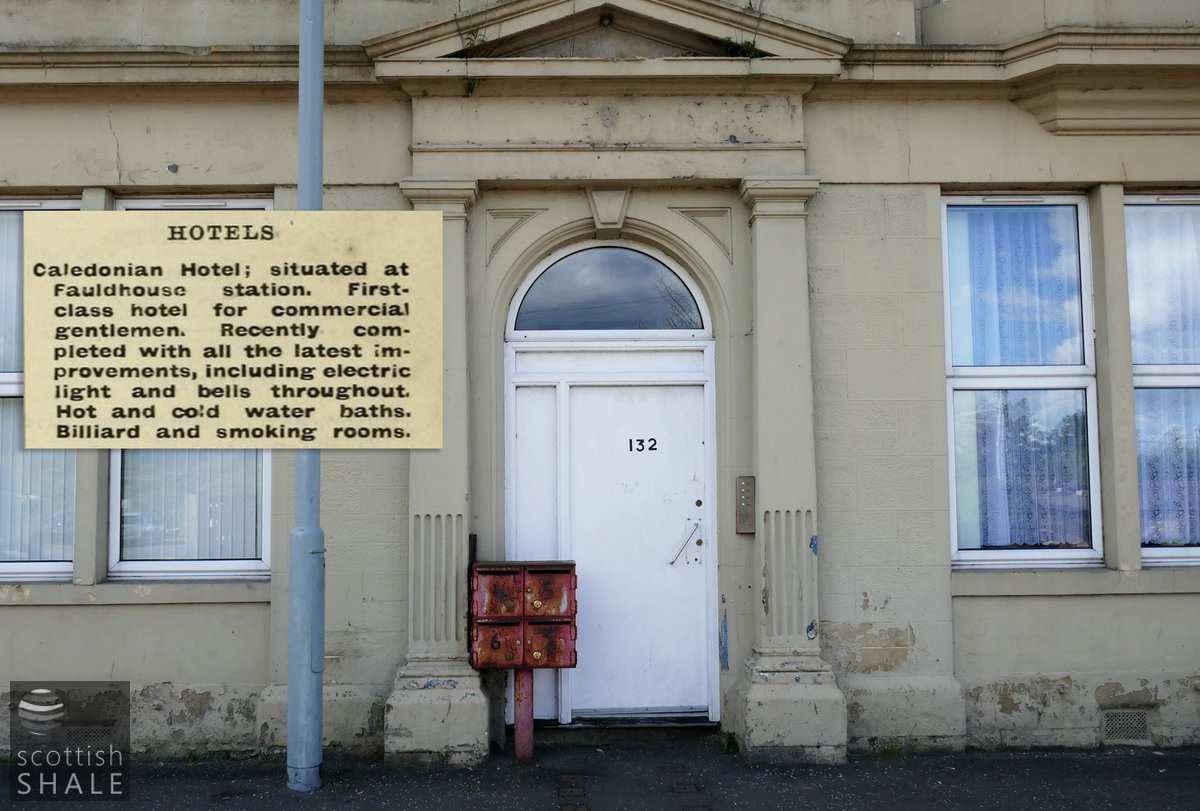 Entrance to the flats, with glimpses of earlier colours beneath the chipped paint. Also a directory listing from about 1905. 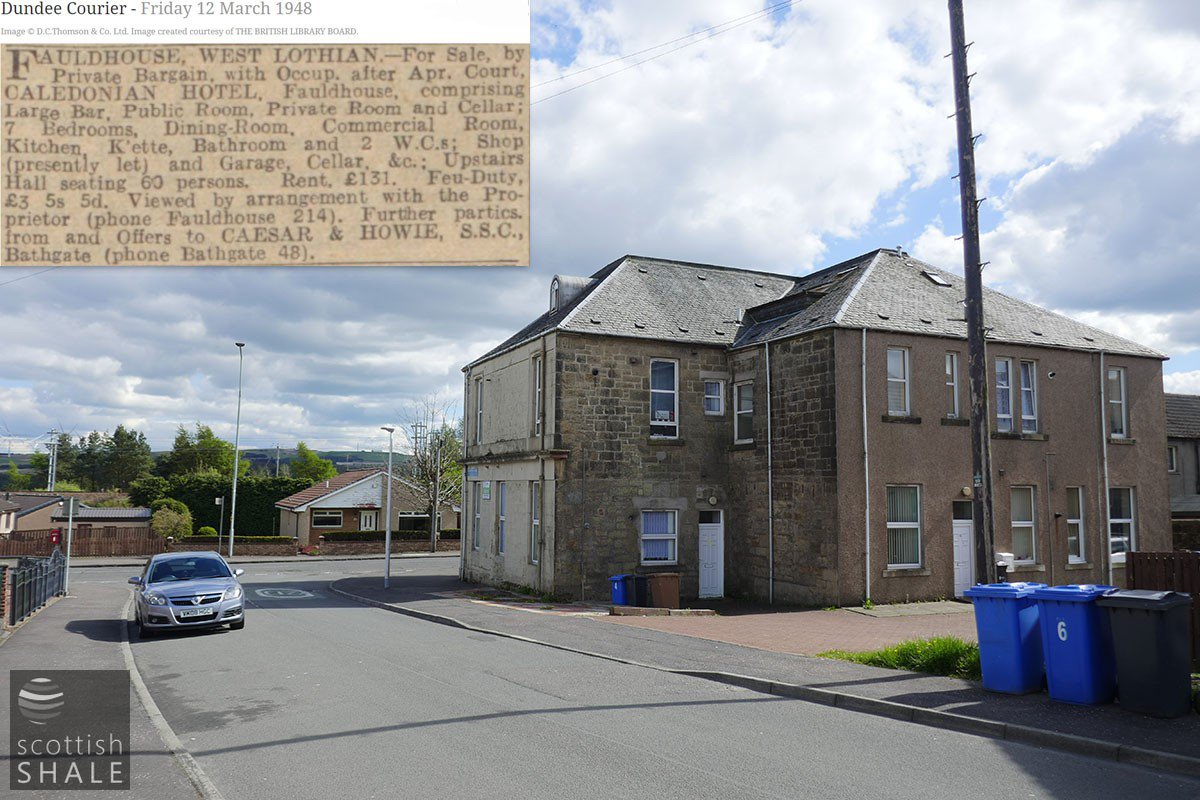 Rear of the Caledonian, and a sale notice from 1948. 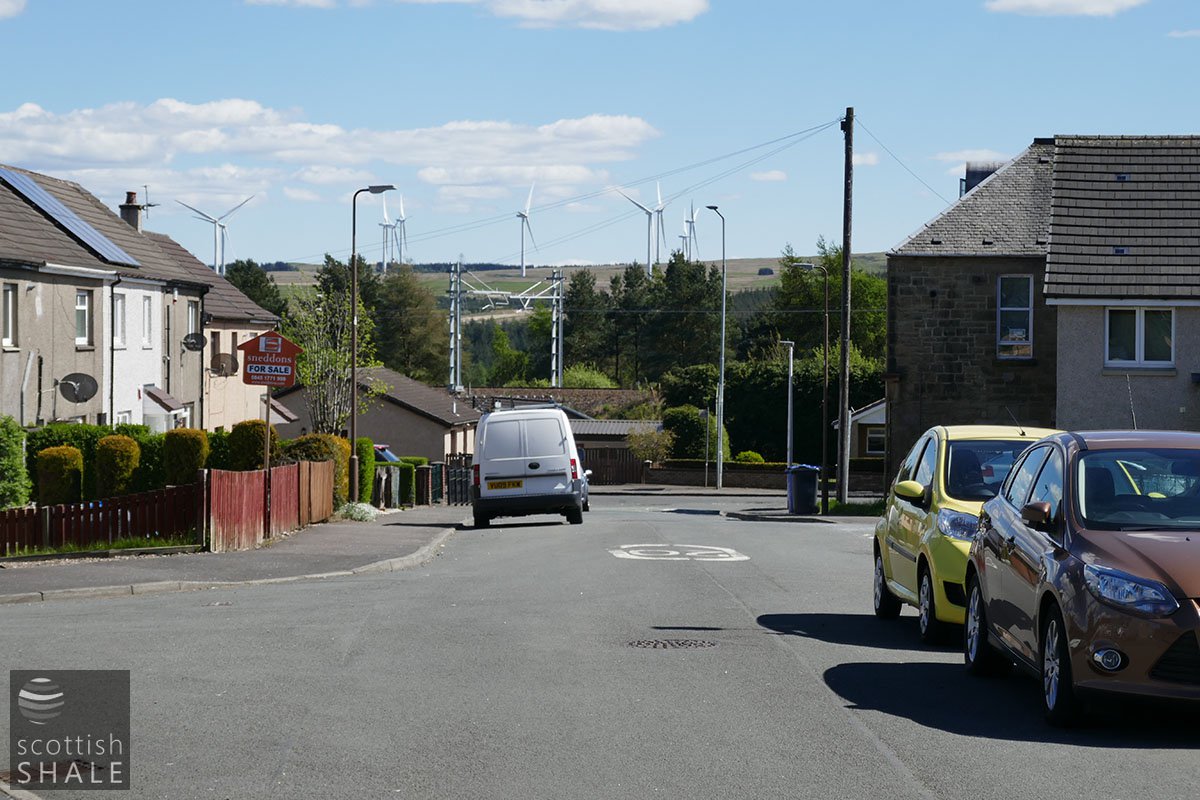 Looking down Caledonian Road towards the former Caledonian Railway line. The street follows the route of the 1840's mineral railway from the Benhar pits. 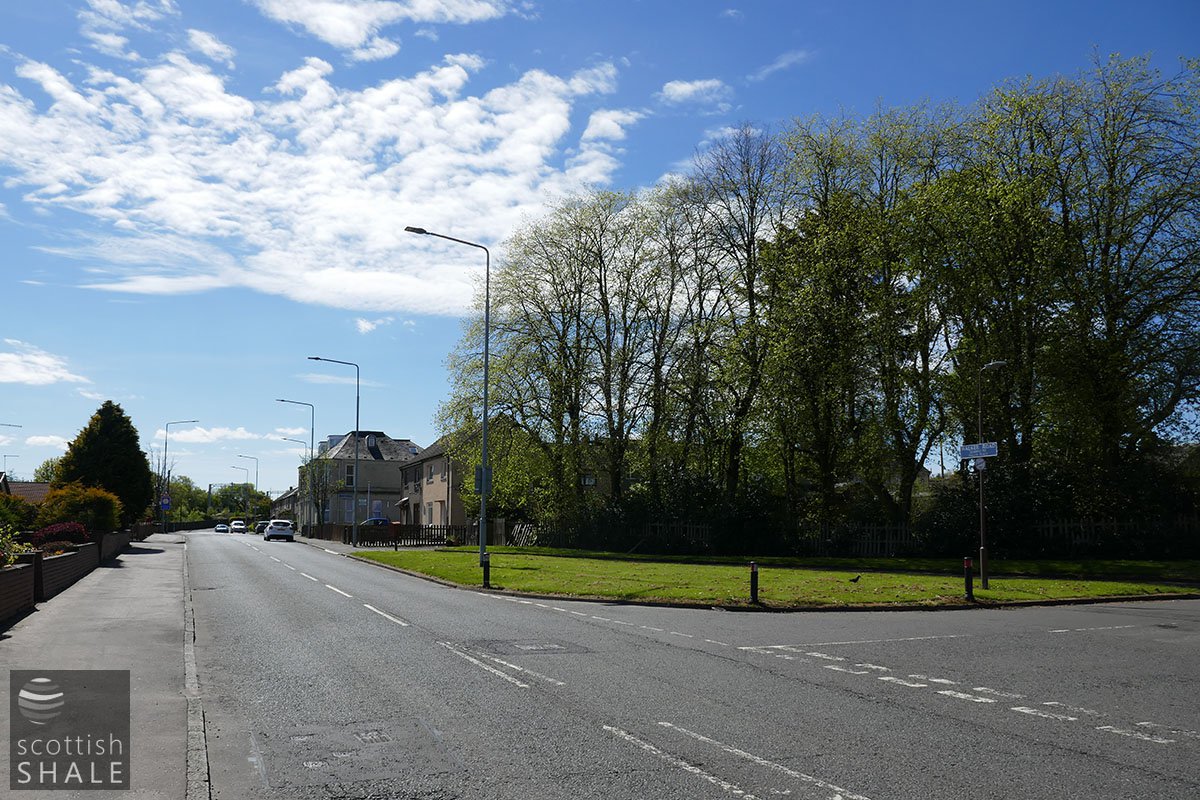 The footpath across the triangle of grass at the entrance to Walker Road marks the route of the railway that once crossed the road on an oblique angle and closed over 120 years ago. 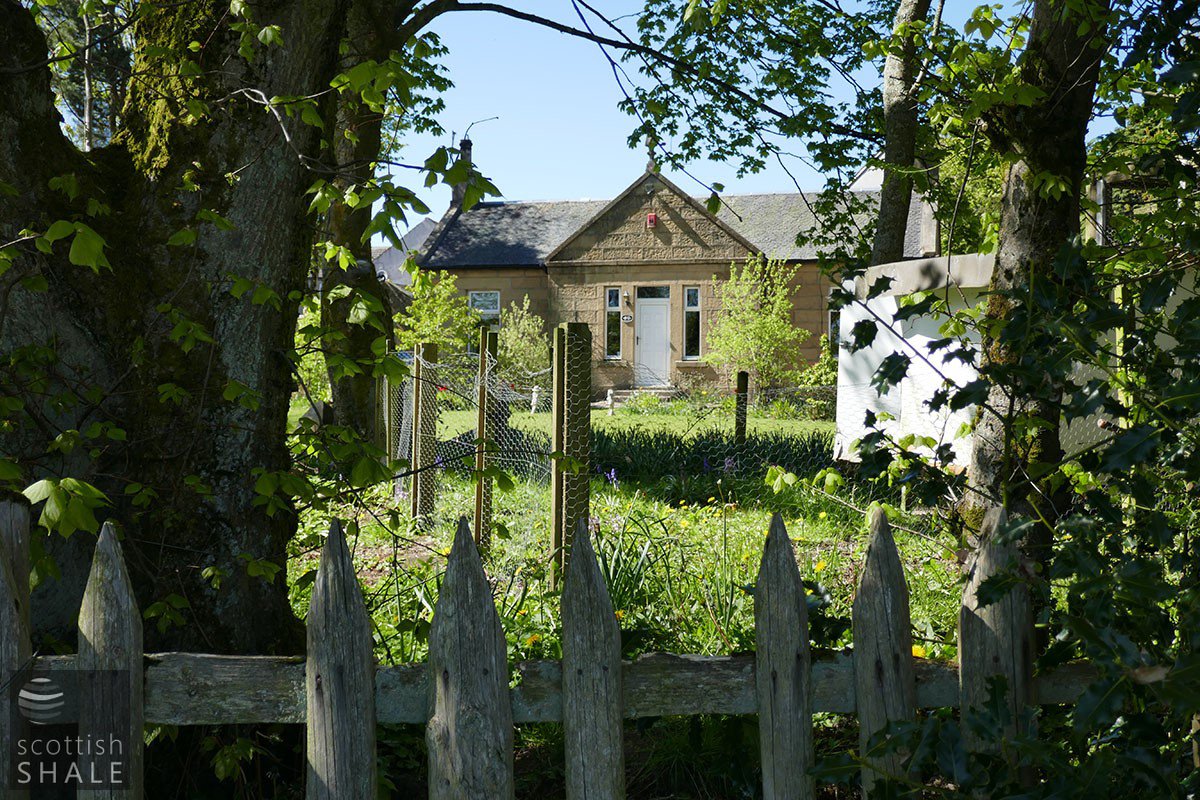 One of the few constant features of the West End landscape, the history of the building now known as Victoria Cottage is unclear, but was built prior to 1895, perhaps as home for a colliery manager or senior official? 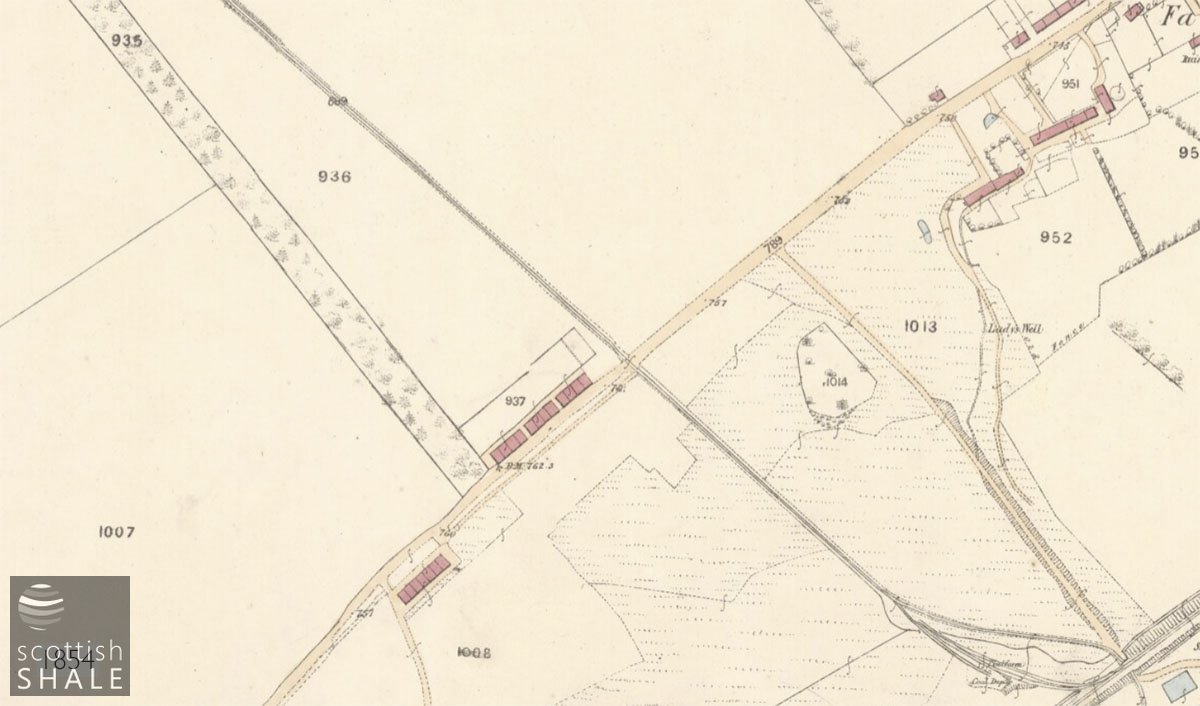 West End area in 1854 with the three rows and the mineral tramway carrying coal from the Benhar pits. Top right is Fauldhouse farm. 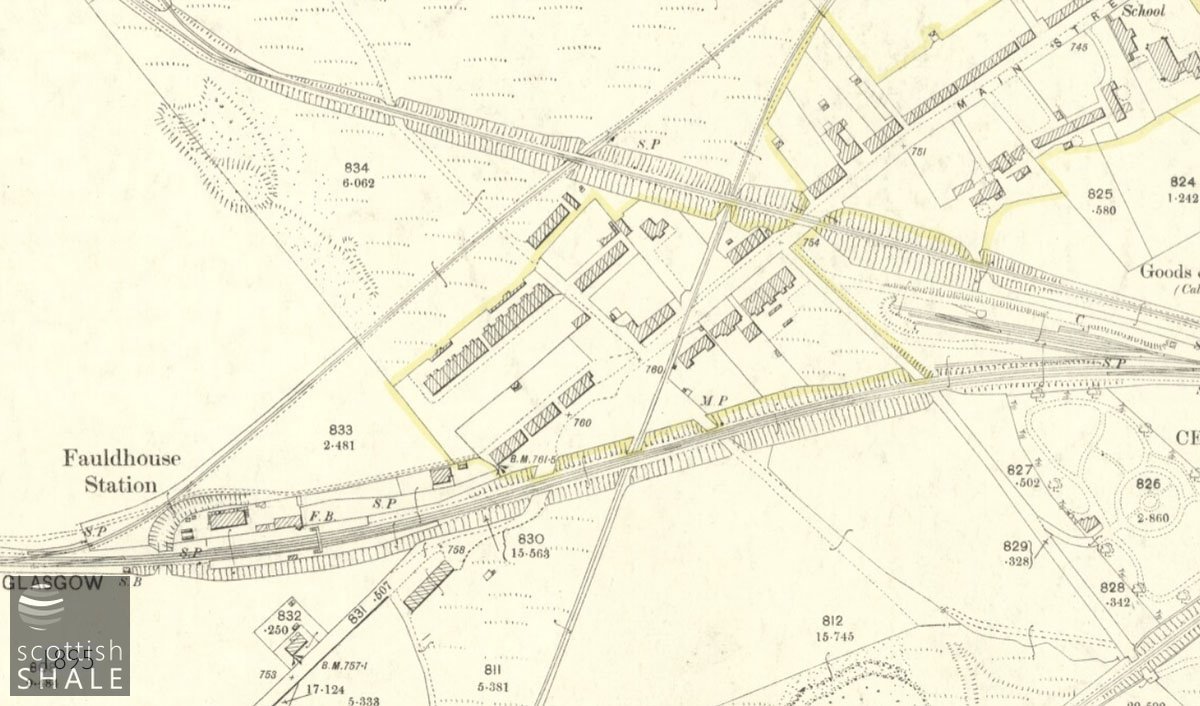 The area following construction of the Caledonian Railway and the North British East Branch, both of which were carried across the landscape on embankments. The old mineral tramway from Benhar is not present, although it seems that an underbridge for it was provided when the Caledonian Railway was built in the late 1860's. A branch to the Fauldhouse collieries cuts obliquely across Main Street, and dives beneath both embankments. The Caledonian Hotel has yet to be built. 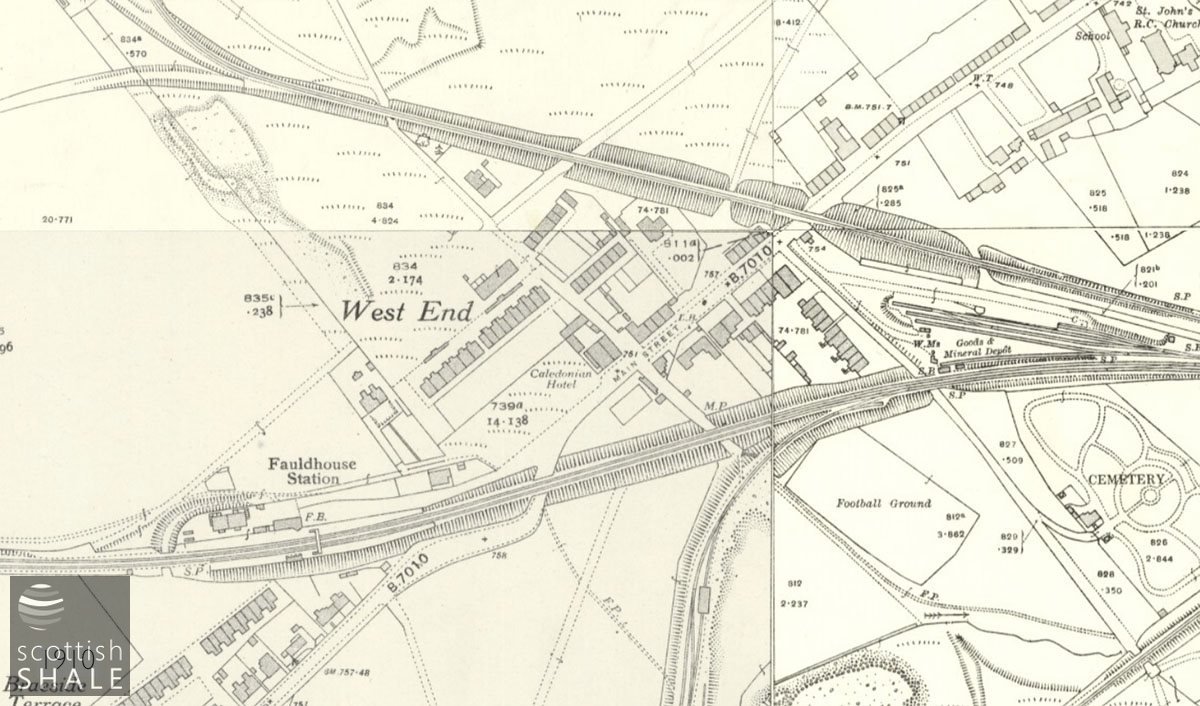 The scene in 1910 following construction of the Caledonian Hotel, the Coop store, and additional housing in West End. The oblique level crossing has been lifted. 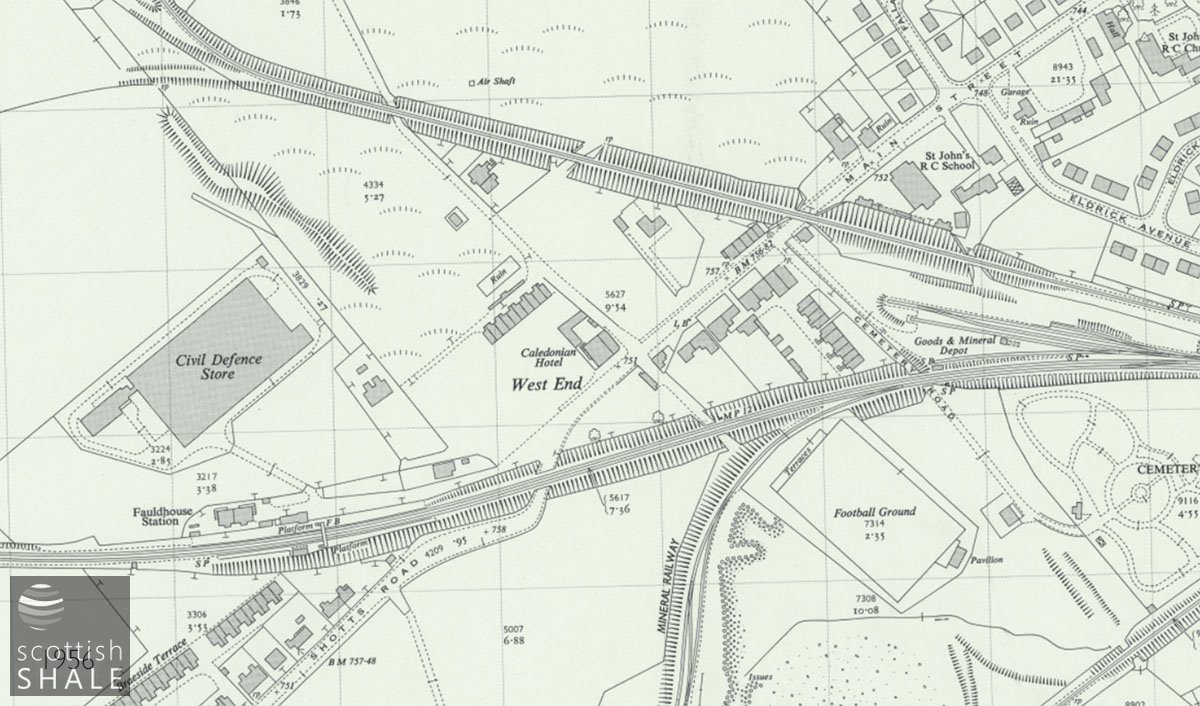 By the time of this map, said to date from 1956, most of the original housing had been cleared and new homes were yet to be built in their place. 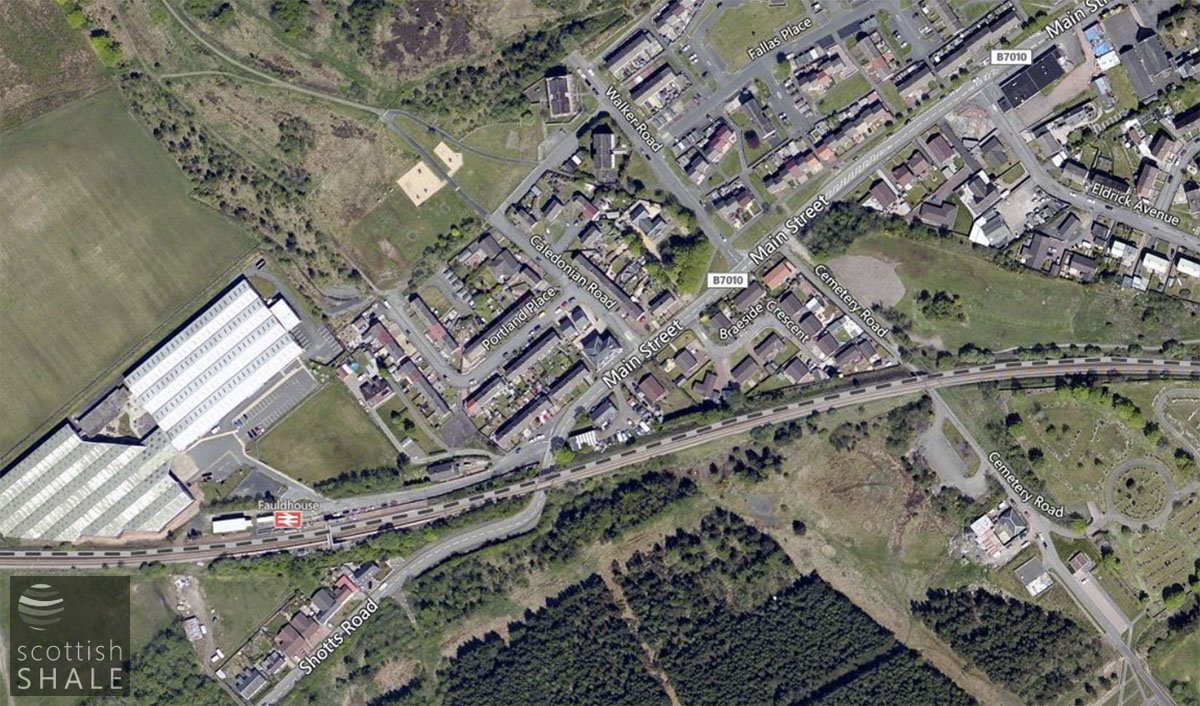