Ochiltree – The Shale Mine That Never Was

A disappointing coal mine for the Linlithgow Oil Company

Map and aerial views, with the location of major structures.

1" OS map c.1901 showing the location of the coal mine and the haulage-way linking it to the works.

The road between Little and Wester Ochiltree runs along the northern-most ridge of the Bathgate hills, and offers views southwards to Binny Craig and northwards to the Forth. In a field close to the road, an island of hawthorn, nettles and brambles obscure the ruins of massive brickwork foundations, labelled on ordnance survey maps as “old shale mine”.

These are actually the remains of Ochiltree coal mine which briefly supplied Houston coal to the furnaces and retorts of the Linlithgow Oil Company at Champfleurie near Bridgend. The company, formed in 1884, was an ambitious enterprise, but was in a state of financial crisis throughout most of its life. A full history can be found at www.scottishshale.co.uk.

In the early days of the company, the poor-quality Houston Coal had been worked on the Ecclesmachan side of the hill and hauled to the oil works along a rough horse-drawn tramway running for three-quarters of a mile alongside the public road. In a final desperate effort to improve the efficiency of their operations, the company constructed a new mine in 1900 to access the old coal workings at a point nearer to the works. A properly engineered haulage-way was also installed. Difficulties were encountered underground, the company collapsed in 1902, and the mine abandoned.

When visiting the site in 2012 it was possible to peer into a brick-lined adit that plunged down eastward beneath the Bridgend to Ochiltree road; this has now collapsed to form an open pit. The major foundations closest to this point are presumably those of the main winding house. Other brick foundations with mounting bolts presumably mark the site of the enginehouse for the haulage-way. 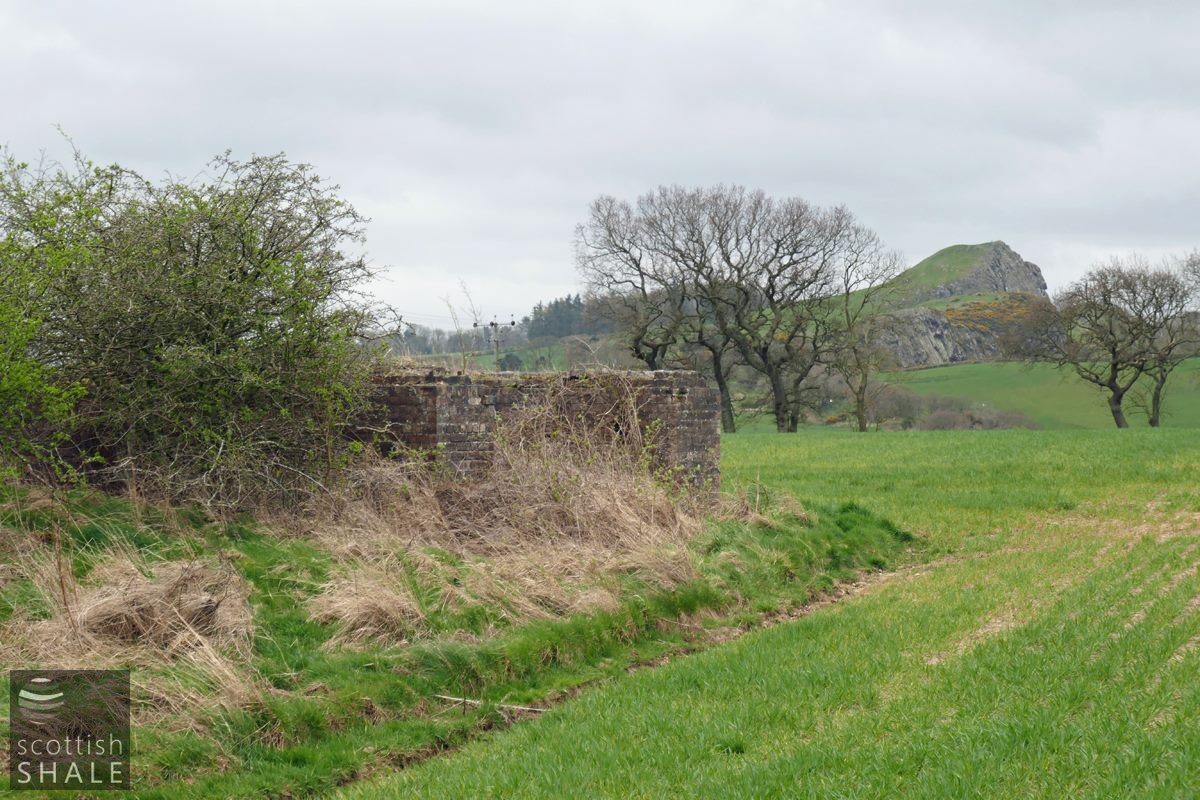 Foundations marked at "A" on the plan, perhaps for the tramway haulage engine, with Binny Craig in the background. 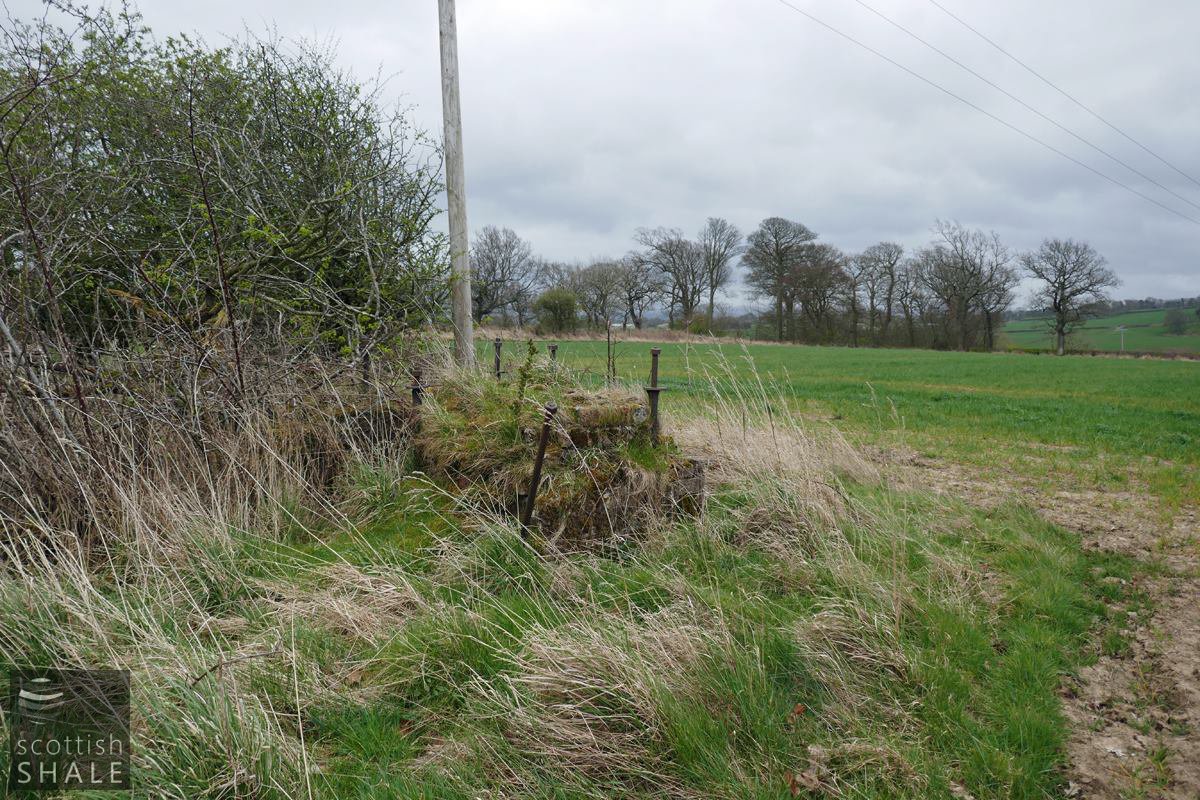 Foundation bolts at point "B". 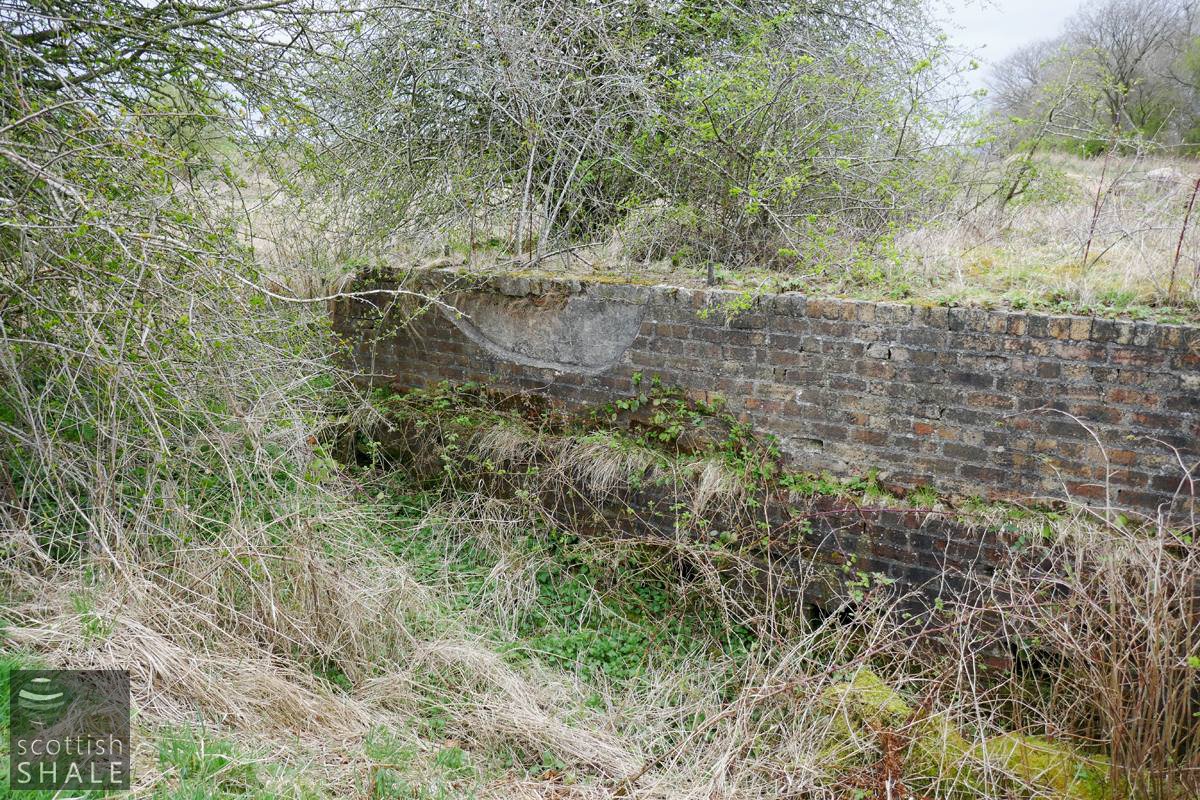 Foundations at point "C". Presumably the base of the mine winding engine house, with cut-out perhaps marking the location of the haulage drum? 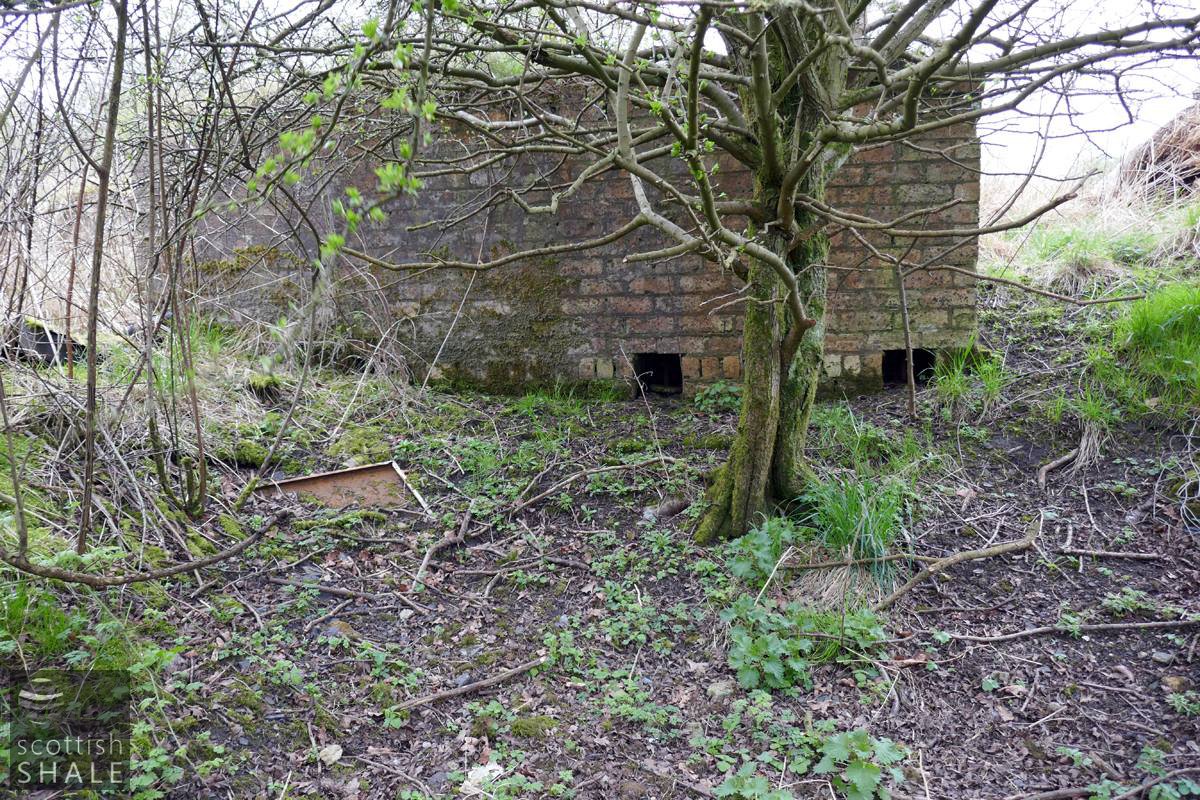 Foundations at point "C"
The cut-outs in the brickwork provide access to the bottom end of the foundation bolts. 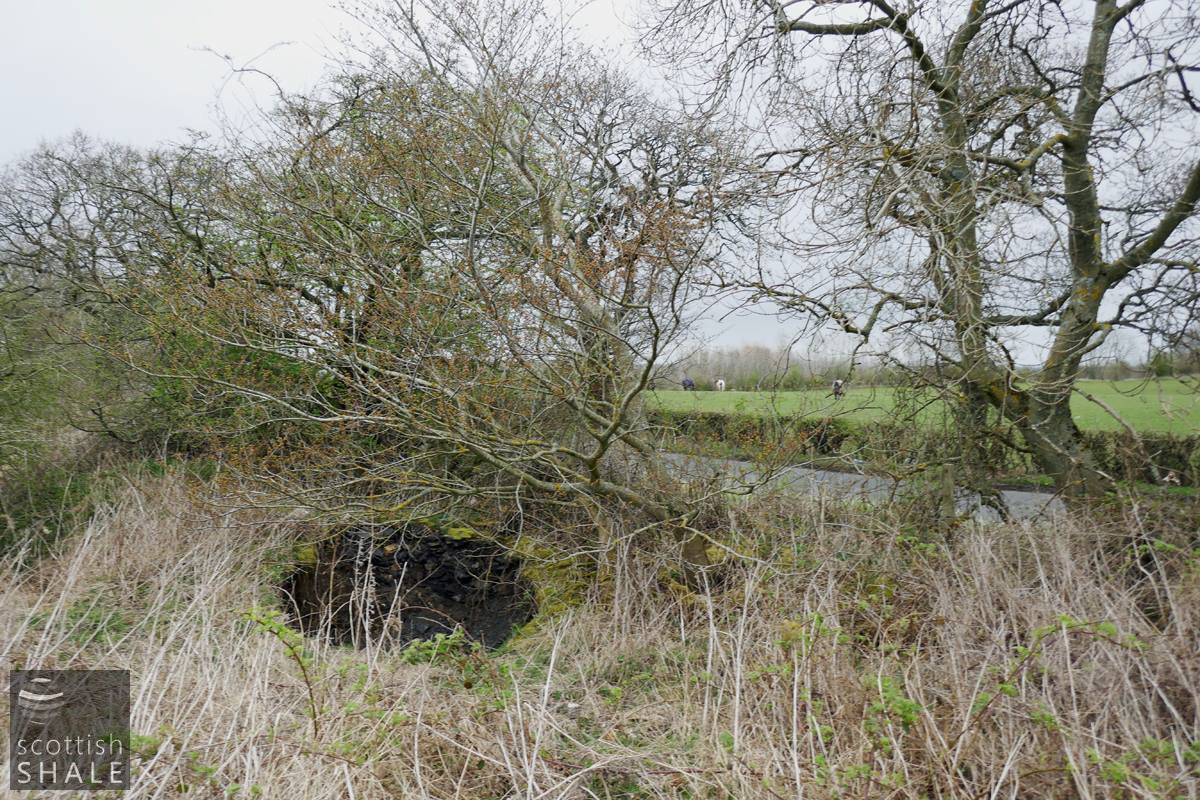 Subsidence over the route of the adit, close to the point where it passes beneath the road. 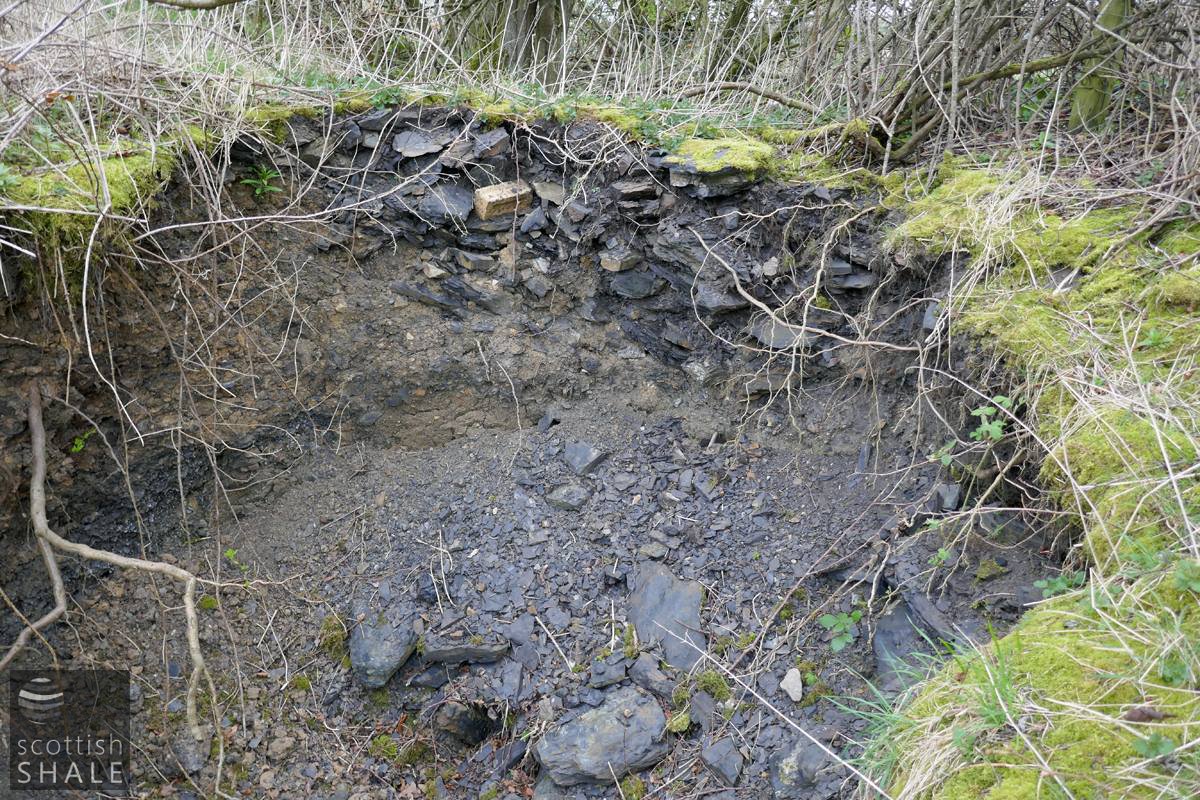 Close-up of the area of subsidence. 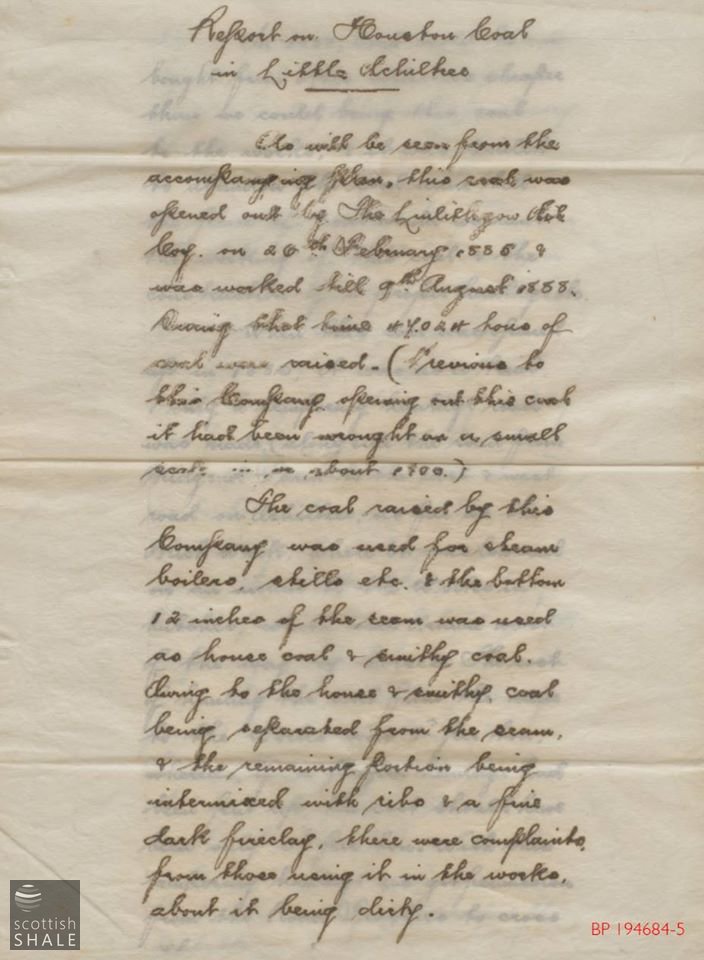 Part of a letterbook copy of a report on coal mining operations.