A Convenators memorial on Benhar Moor 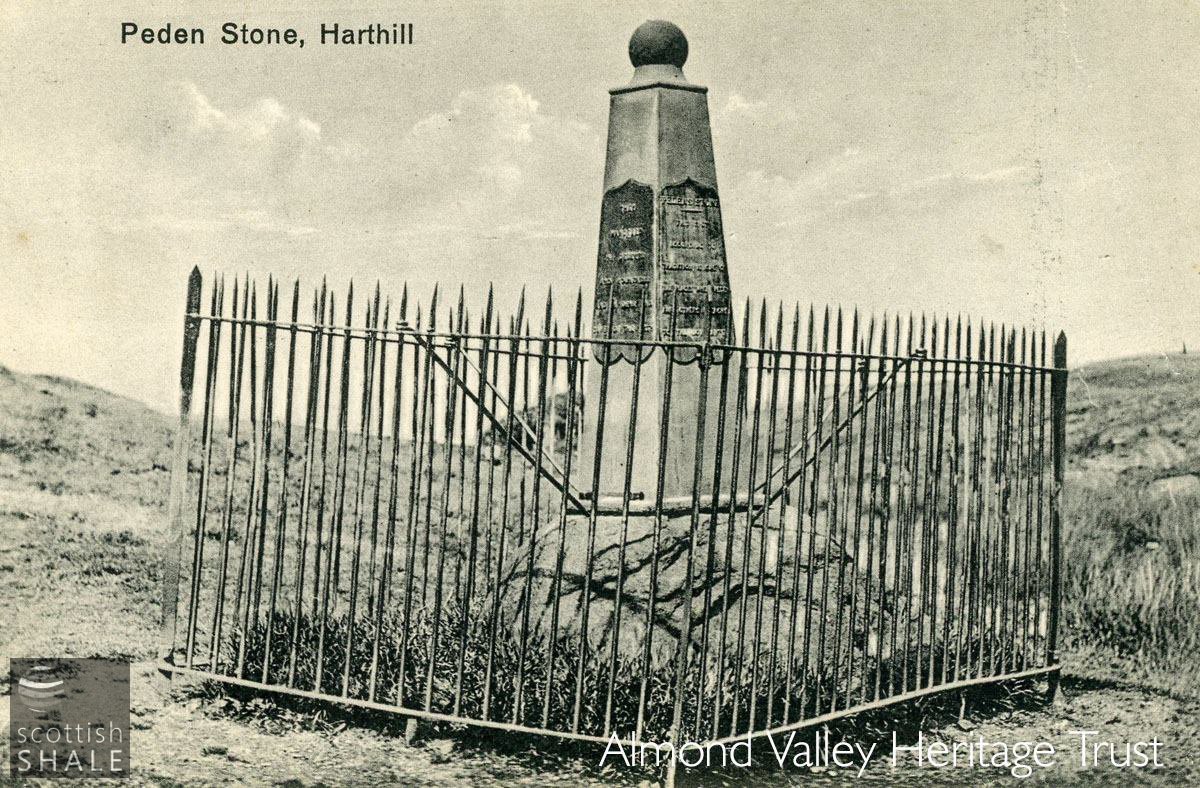 Postcard sent in 1928, with clear moorland surrounding the memorial. 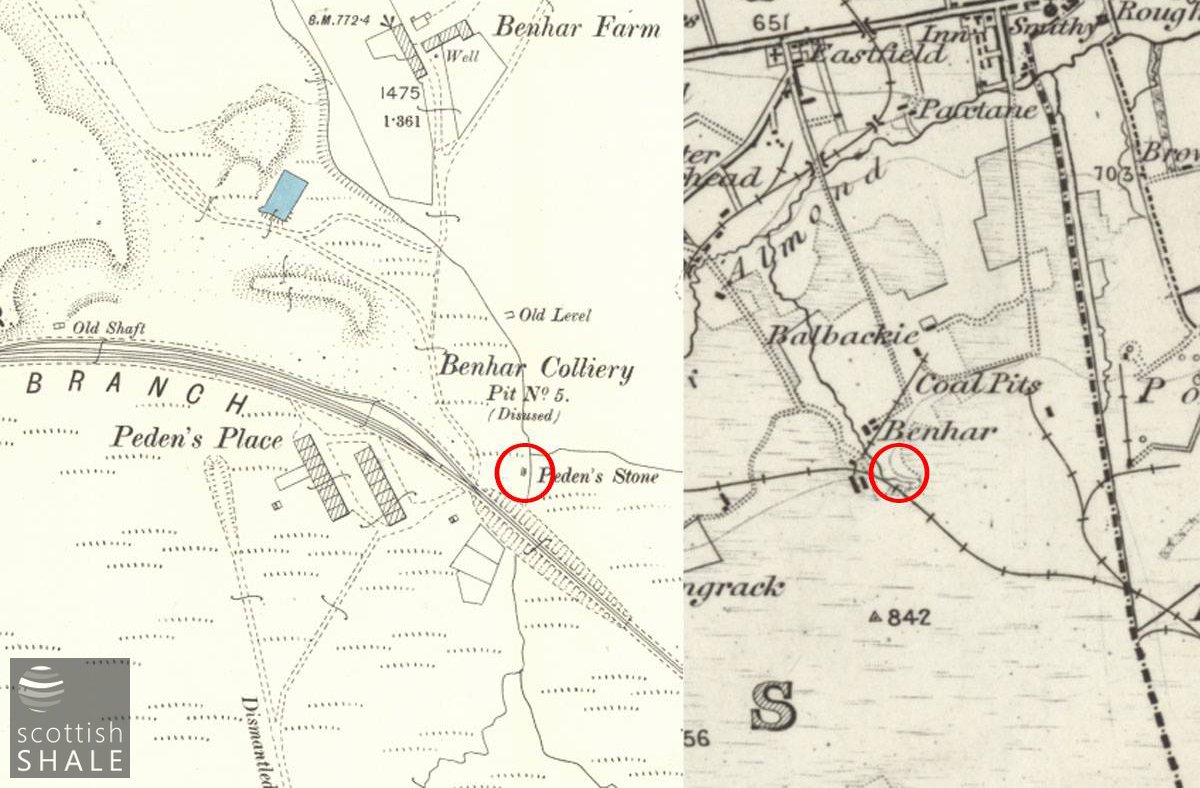 With the rise of industry and commerce during the early 19th century, came a surge of popular interest in the heroes and adventurers of Scotland's past. Many stirring stories were told of the Covenantors; men of religion who refused to accept the authority of the king in matters of belief, who were consequently forced to live an outlaw existence. Unofficial religious services – conventicles – had to be held in secret, often at remote outdoor locations. Ministers lived as fugitives, facing capture, imprisonment or death. Alexander Peden with one of the leading figures of the covenantor movement who, between 1663 and 1683 travelled widely to conduct services, enduring periods of captivity and narrowly escaping transportation to America.

Throughout Scotland there are a good number of stones, caves and other landscape features that reputedly mark where Peden's open-air services took place. One such Peden's Stone is on remote moorland at Benhar, about a mile south of Harthill, and not far from the county boundary with West Lothian. The stone is a small table-size whinstone boulder lying on one side of a natural bowl-shaped depression. The area seems well suited to secret meetings. 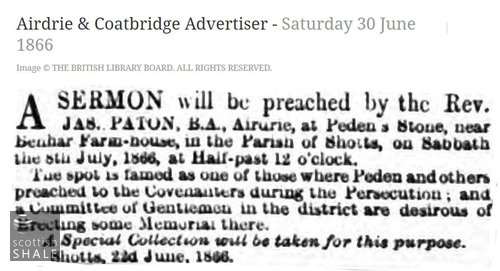 “Peden's stone” is not marked on the first edition OS map, surveyed in 1859, nor mentioned in any earlier descriptions of the antiquities of Shotts parish. Perhaps recognition of the stone as a relic of covenanting times stems from a book by Ellen Emily Guthrie (described as a “young, Glasgow lady”) published in1860. A review stated “the fair author of (Tales of the Covenantors) has not satisfied herself with the thoughts and narratives of others, but has visited the thrilling scenes where the deeds were done and gathered from the descendants of the martyred much interesting information”. “She gathers into one paper many interesting notes as to the midland scenes of persecution (which will) enhance the value of book greatly to our friends residing in the neighbourhoods of Bathgate and Linlithgow”

Perhaps as a consequence of this new insight, a service was held at the stone in July 1866 and a collection taken to fund erection of a permanent monument. A further service was held that September as the original meeting had been held on a “very stormy day” and consequently the congregation was “comparatively small”. Many contributors were associated with the local iron industry, and it seems fitting that the memorial took the form of a substantial cast iron pillar, with inscriptions on four sides, which was firmly fixed on top of the stone. The main inscription states “This spot according to tradition is one of the places were Peden and others preached to the Covenanters”

When the memorial was first installed, the wild moorland landscape surrounding the stone must have looked much as it did in Peden's time. Within only a couple of years, a mineral railway was built along one lip of the natural amphitheatre, coal pits sunk, and worker's rows built just across the tracks which became known as “Peden's Place”. In1883, when a special conventicle was held to mark the 200th anniversary of Peden's death, it was noted that “the place is sadly marred by the near proximity of Messrs Addie and Son's works, and the line of railway carrying mineral traffic running close by.” At that time “modern conventicles” attracted congregations of up to 2,000 people and police were often reported to be present to maintain public safety. The site was also used for temperance gathering and union meetings. Annual services at the stone continued throughout most of the 20th century, and the site remains well-tended as befits a place of worship. More information about services at the stone are found on the website of Benhar Evangelical Church.

Our postcard, sent in August 1928 records “we walked miles on Sunday evening to see the stone. It stands in a cave in which the covenanters held their meetings (?), and is still a meeting place for worship. This is a fine place for a holiday” 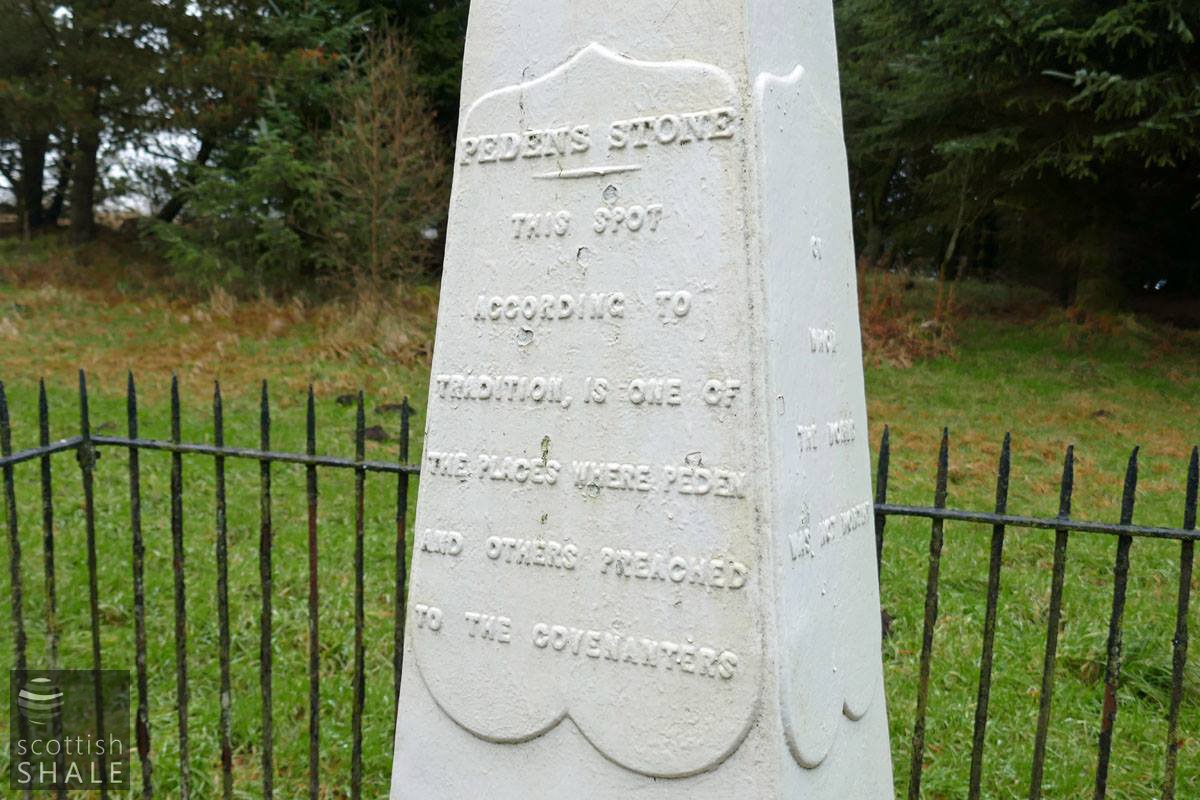 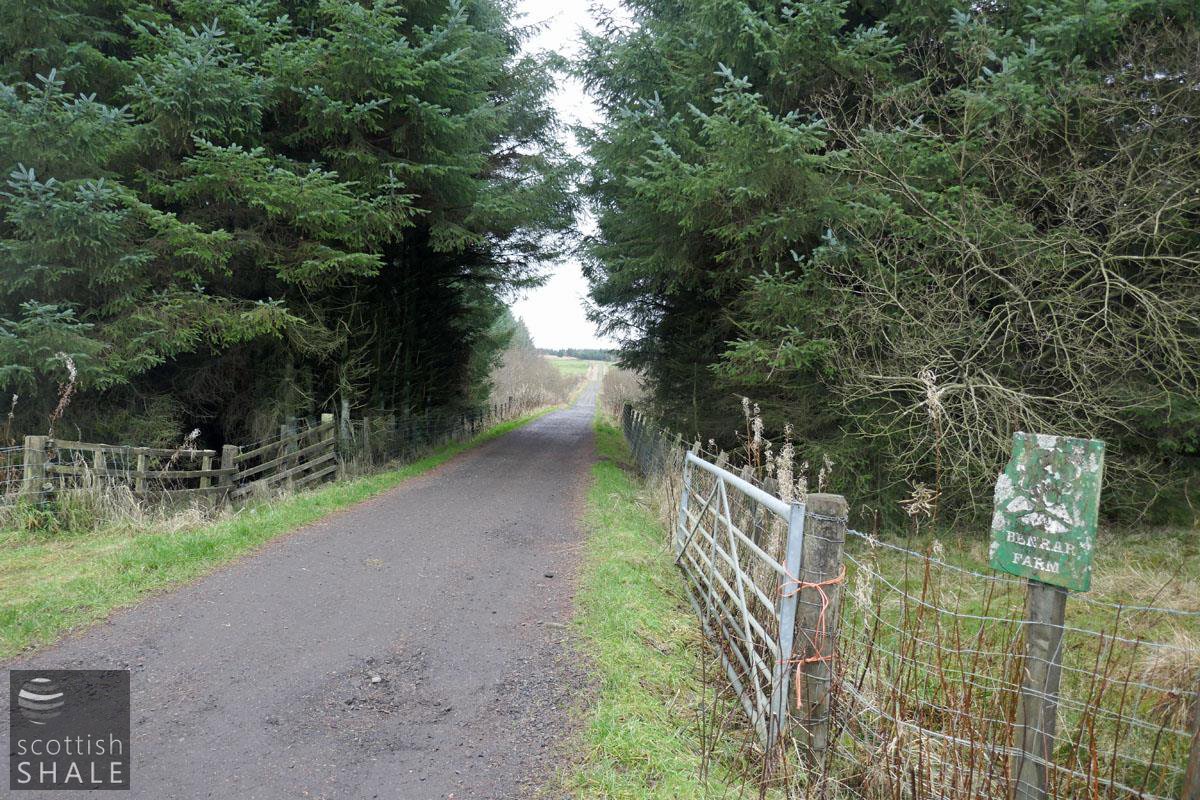 "Covenanters road", leading from Harthill to the site of Benhar farm and the stone. 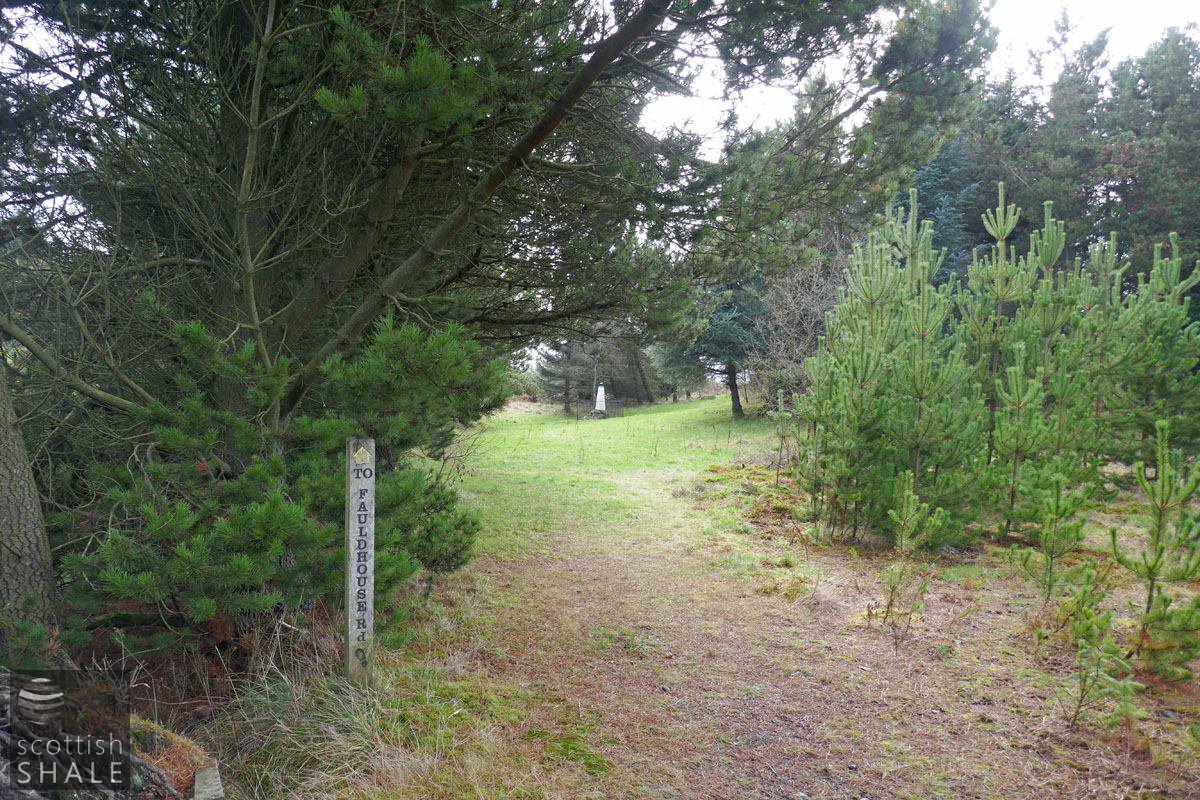 The memorial, standing within a grove of pine trees, which have grown over the last decade and transformed the appearance and feel of the site. 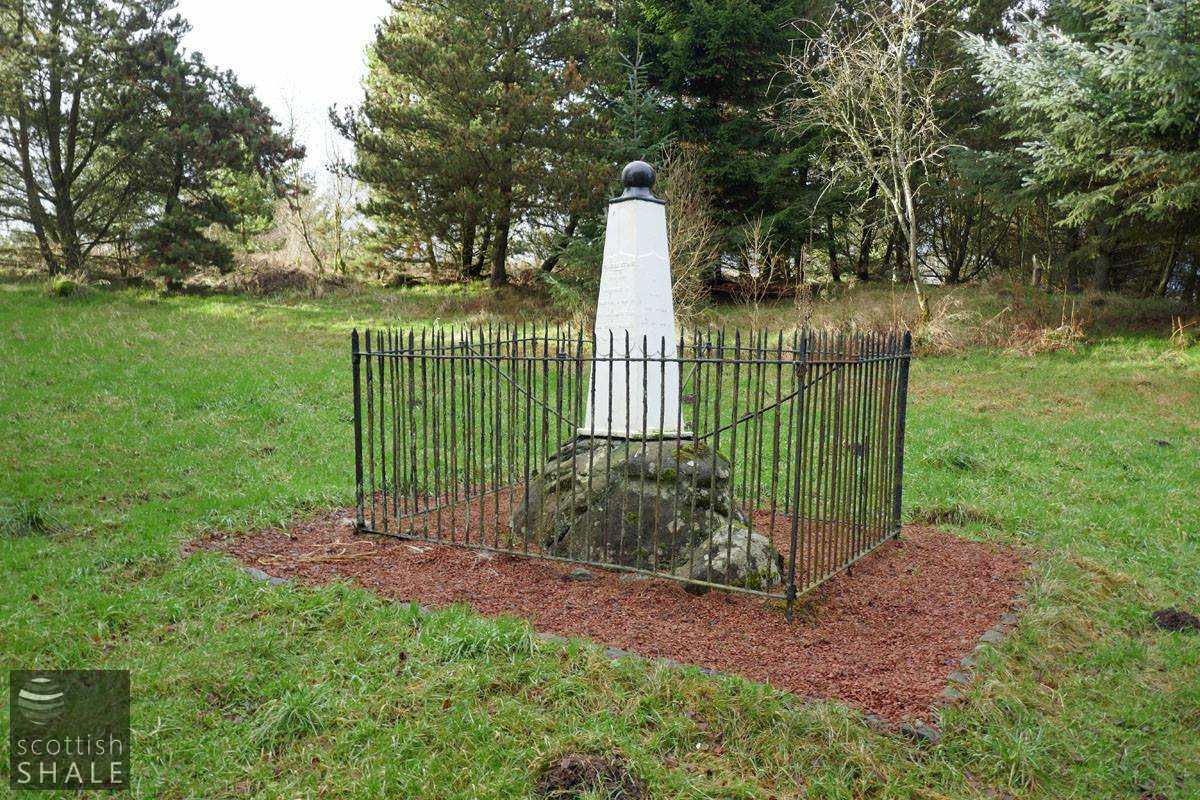 The memorial - the railway once ran just beyond the pines. 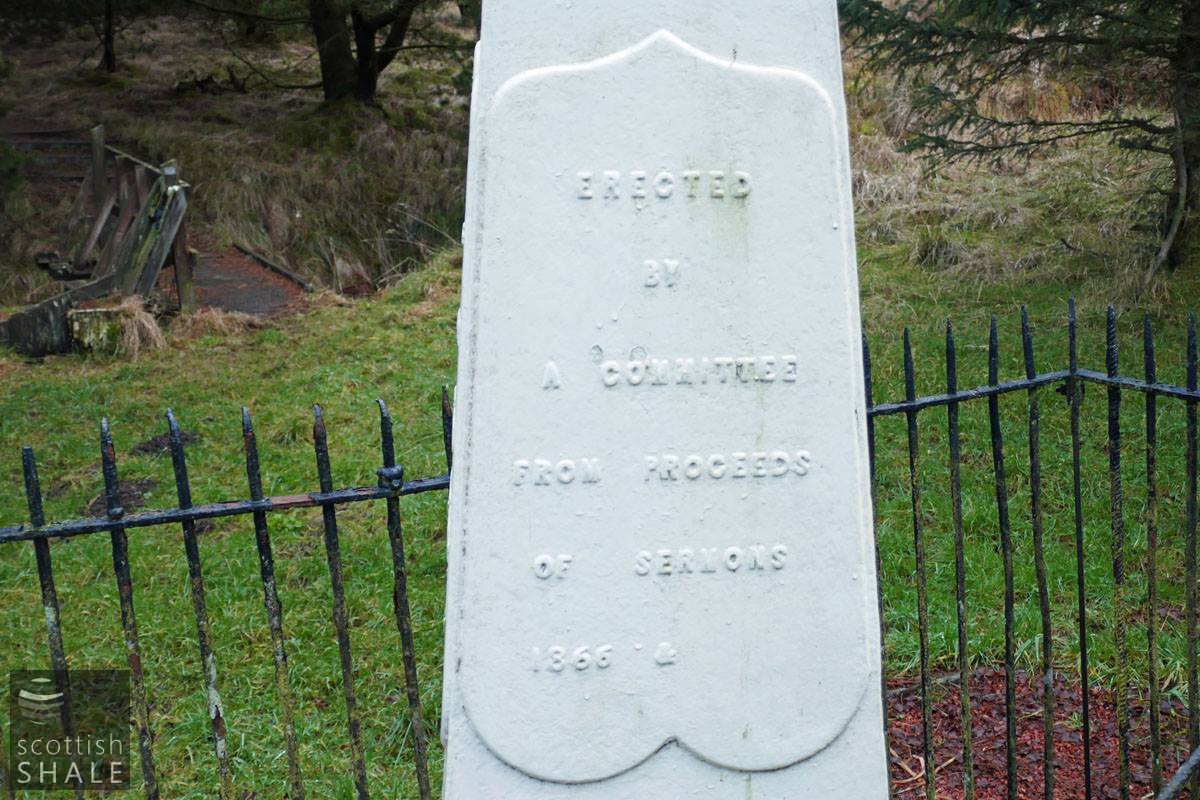 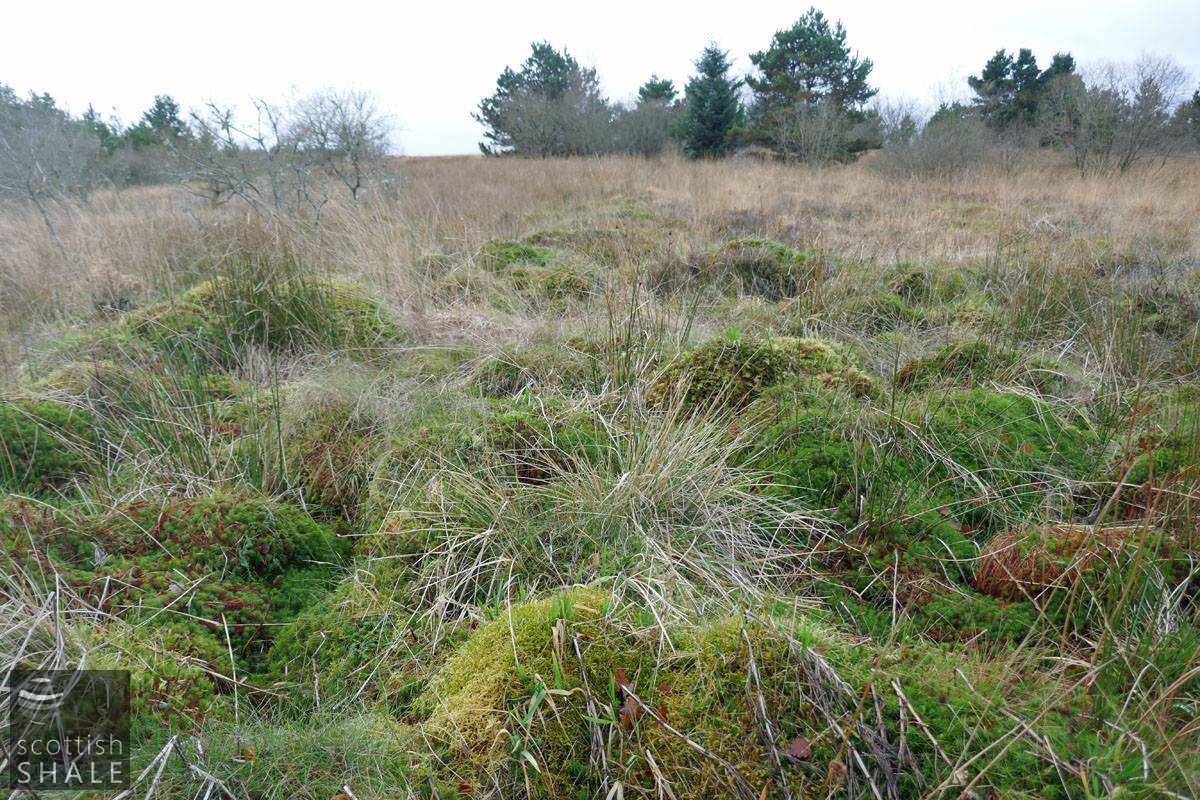