Philpstoun mill and its watercourses 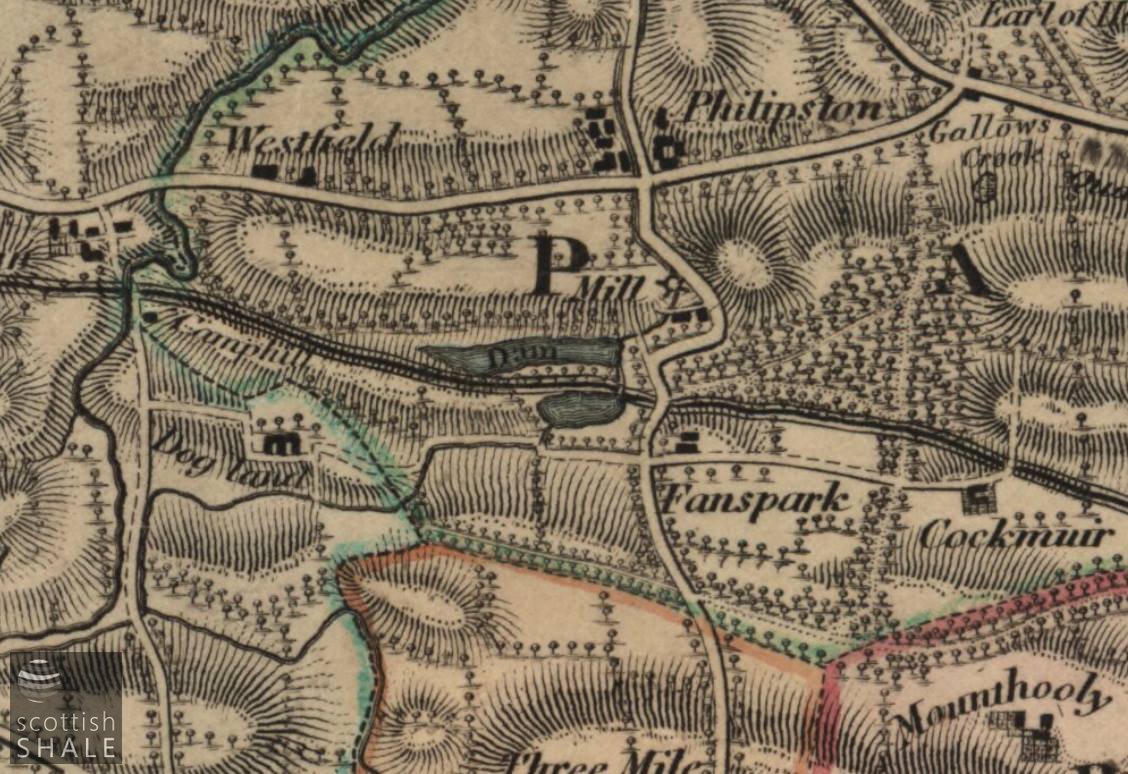 "Philpstoun Loch", shown on Thomson's atlas of Scotland, published 1832. By then the Union Canal had cut the "loch" in two. Image courtesy of National Library of Scotland. 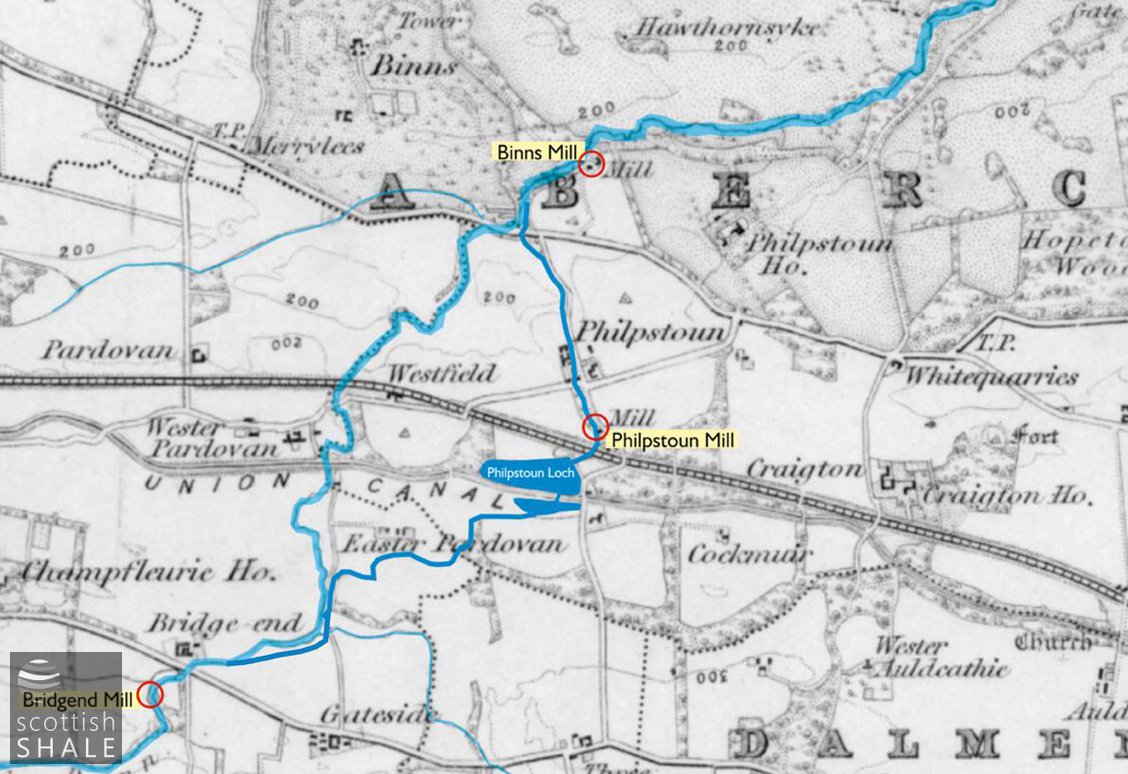 Route of the mill lade and Philpstoun burn. Map image courtesy of National Library of Scotland.

Between Fawnspark and Philpston, the Union Canal passes between the two massive spent shale bings of the Philpstoun oil works. It is hard to believe that this tree-lined canyon was once site of a substantial freshwater loch, enjoying open views across the surrounding farmland.

Philpstoun Loch seems to have been created by damming a minor stream that flowed from the lands of Pardovan, northward through a small glen to Old Philpston, and onward to join the Midhope burn. The loch was the centre of a remarkable network of artificial watercourses constructed to power Philpstoun mill, sited in the glen south of Old Philpstoun. 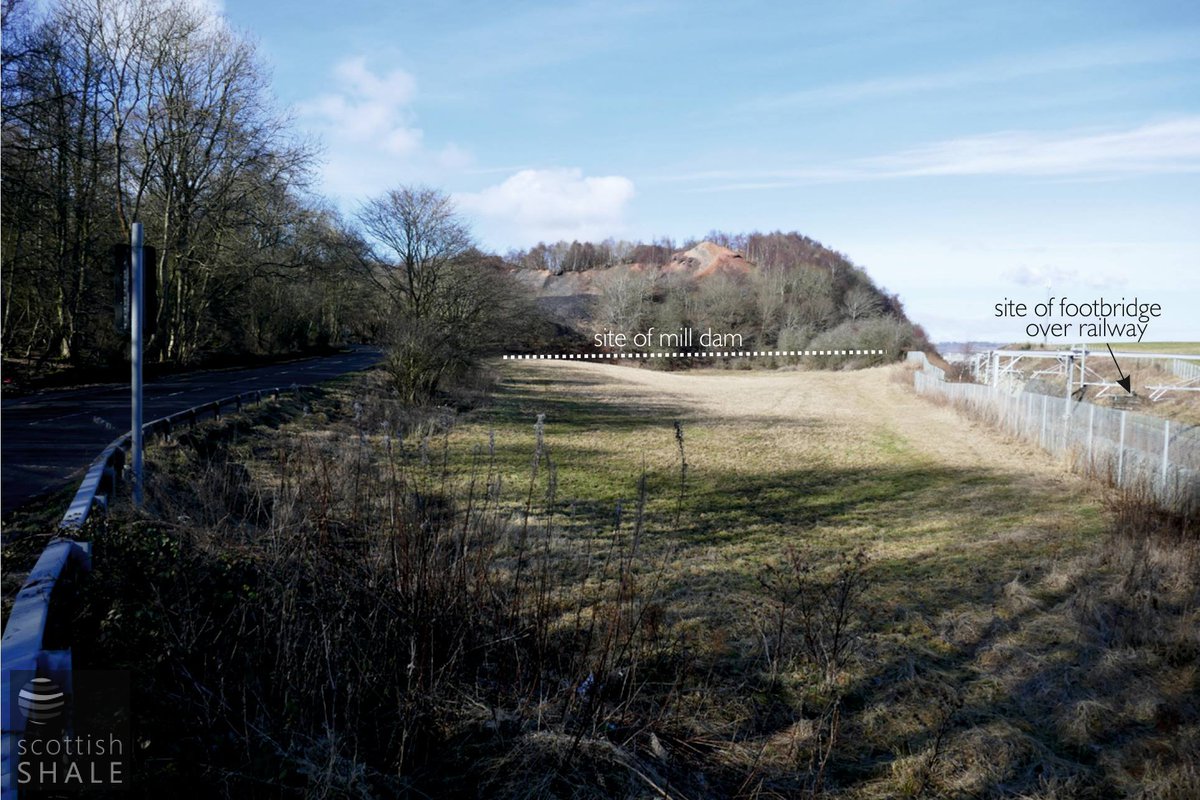 View westward from the the bridge carrying the B8046 over the Edinburgh and Glasgow railway. 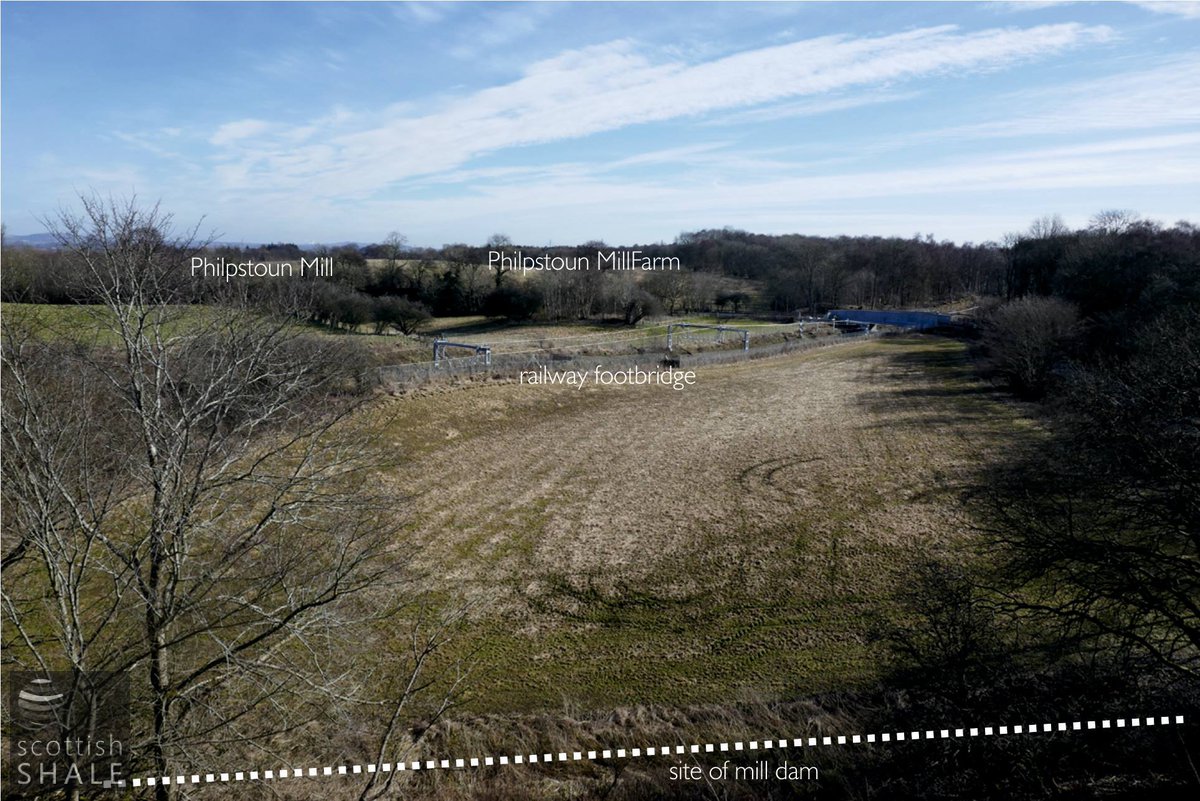 View from the shale bing looking east towards the bridge carrying the B8046.

The papers of the Binns estate make reference to a mill in the Philpstoun area as early as the 15th century and records that Philpstoun mill and loch were sold in 1687 to Sir Thomas Dalyell of the Binns. A note of protest dated 1743 records how that a former owner had mischievously “carried off the sluice of the mill dam at Philpstoun…., and drained the loch of water” A further document of 1745 records the digging of a lade carrying surface water from the lands of Cockmuir westward into Philpstoun Loch. It appears however that the major flow of water into the loch came along a lade dug following a sinuous route from the Haugh burn near Bridgend, almost a mile to the south west.

In the early 1820's a causeway was constructed to carry the new Union Canal across the centre of Philpstoun loch; a culvert being installed beneath the canal to link the two parts. Further dislocation occurred in 1842 when the Edinburgh and Glasgow Railway cut across the land between the mill dam and the mill building. Presumably the mill lade was conducted beneath the railway, which lay in a cutting at that point, while a spindly footbridge was installed across the line for use by the miller.

The two parts of Philpstoun Loch, dissected by the canal
25" OS map, c.1855 Image courtesy of National Library of Scotland.

The loch as marsh, with the northern part gradually being infilled by the oil works bing.

Northern bing encroaching as far as the mill dam, and the bing on the southern side of the canal gradually extending. 25" OS c.1916.

In the 1850's, Philpstoun Mill was described as ”a large oat and barley mill two stories high”, while a group of buildings a little to the south was recorded as “residence of miller, offices and two rows of cottages, one story, all in good repair; with gardens attached.” It was noted that the southern part of the loch had by then, largely silted up.

By the time of the 1896 Ordnance Survey map, the site of the loch was shown as marshland, with spend shale waste being tipped in much of the northern part. The mill building was shown as disused, and much of the lade that fed the “loch” was absent from the map, presumably infilled. Within twenty years the northern shale bing extended right up to the line of the former mill dam, and shale was being tipped on the southern side of the canal. Although the mill building gradually fell into ruin, the miller's house and cottages continued to be inhabited up to the 1950's.

Today, there's no trace of flowing water anywhere along the route of the mill lade, or in the burn that once flowed through Old Philpstoun. A gable end and some ruinous walls survive the site of Philpstoun mill cottages, but there is now little evidence of the main mill building. Near Bridgend, a footpath now follows the first part of the route of the mill lade, which can then be traced as dry ditch running parallel to the Gateside to (new) Philpstoun road before the route disappears beneath the ploughed fields of East Pardovan farm. 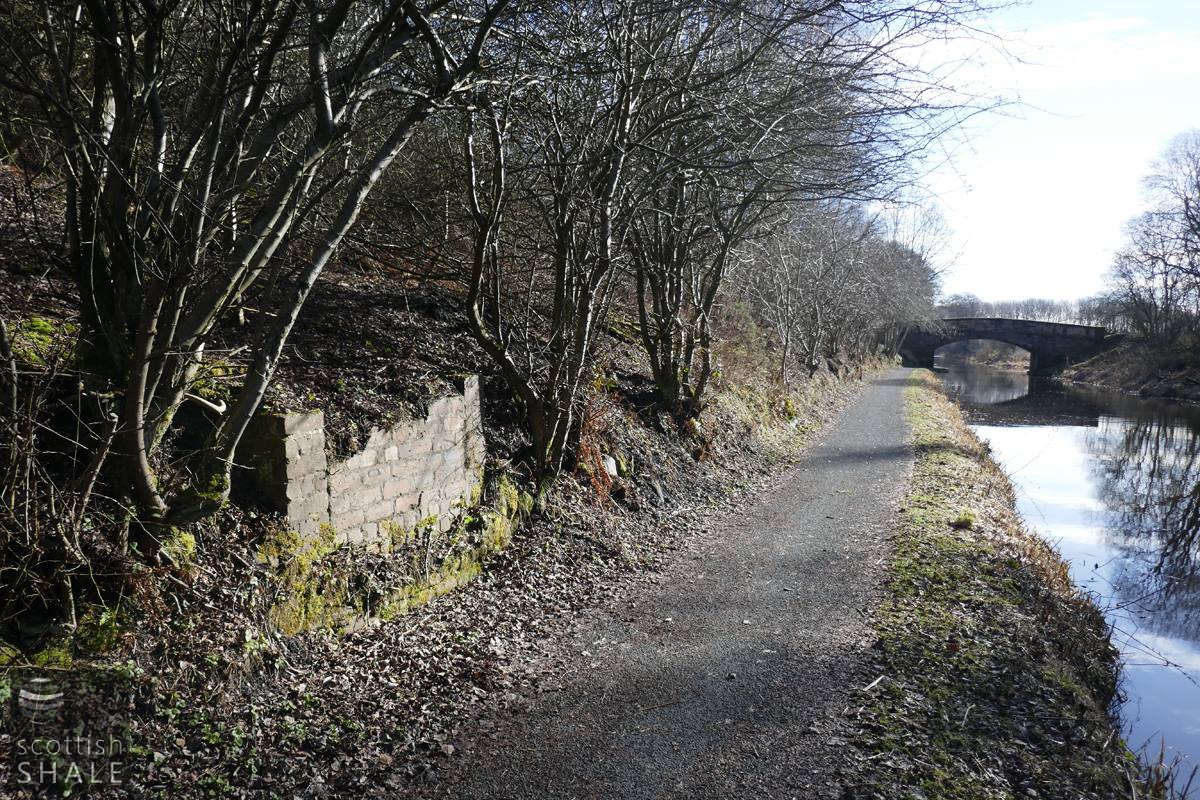 The Union Canal, looking eastwards towards bridge 38.
The brick structure beside the towpath seems to relate to the location where the culvert linking the two parts of the loch passed beneath the canal. Perhaps this provided access to a sluice? 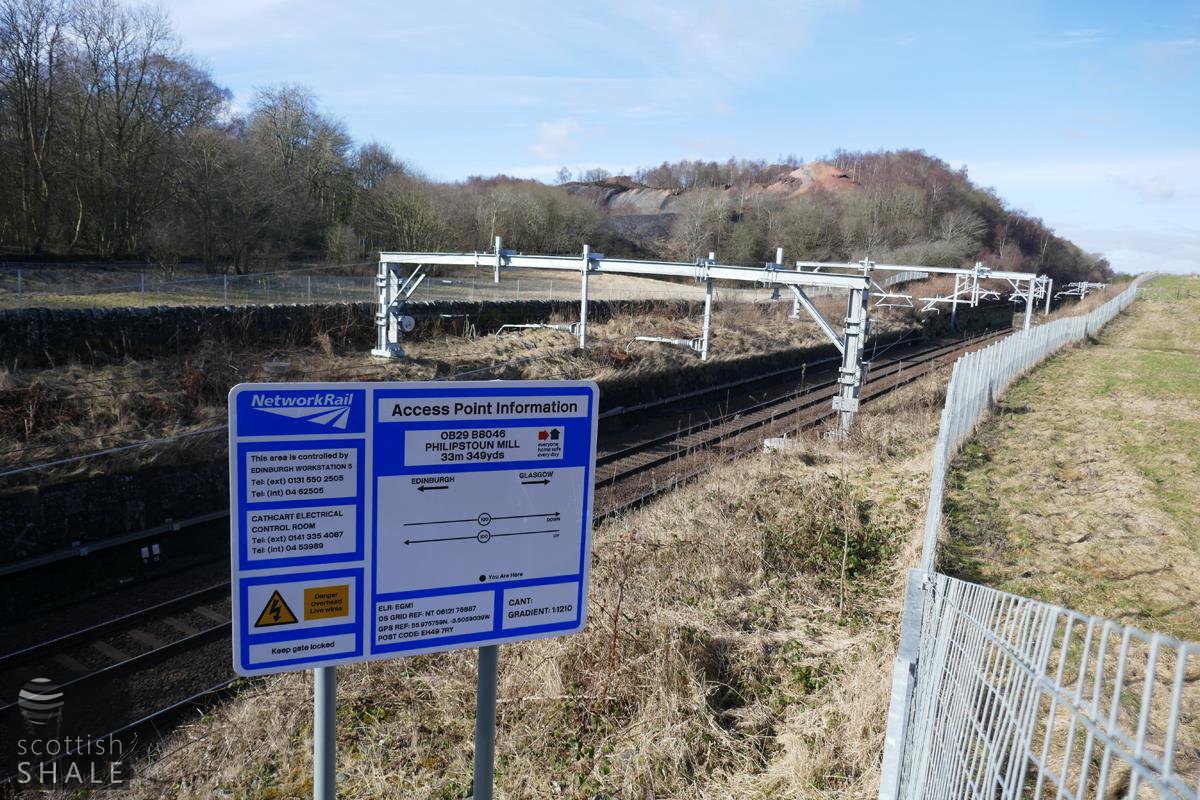 The site is still known as "Philpstoun Mill". 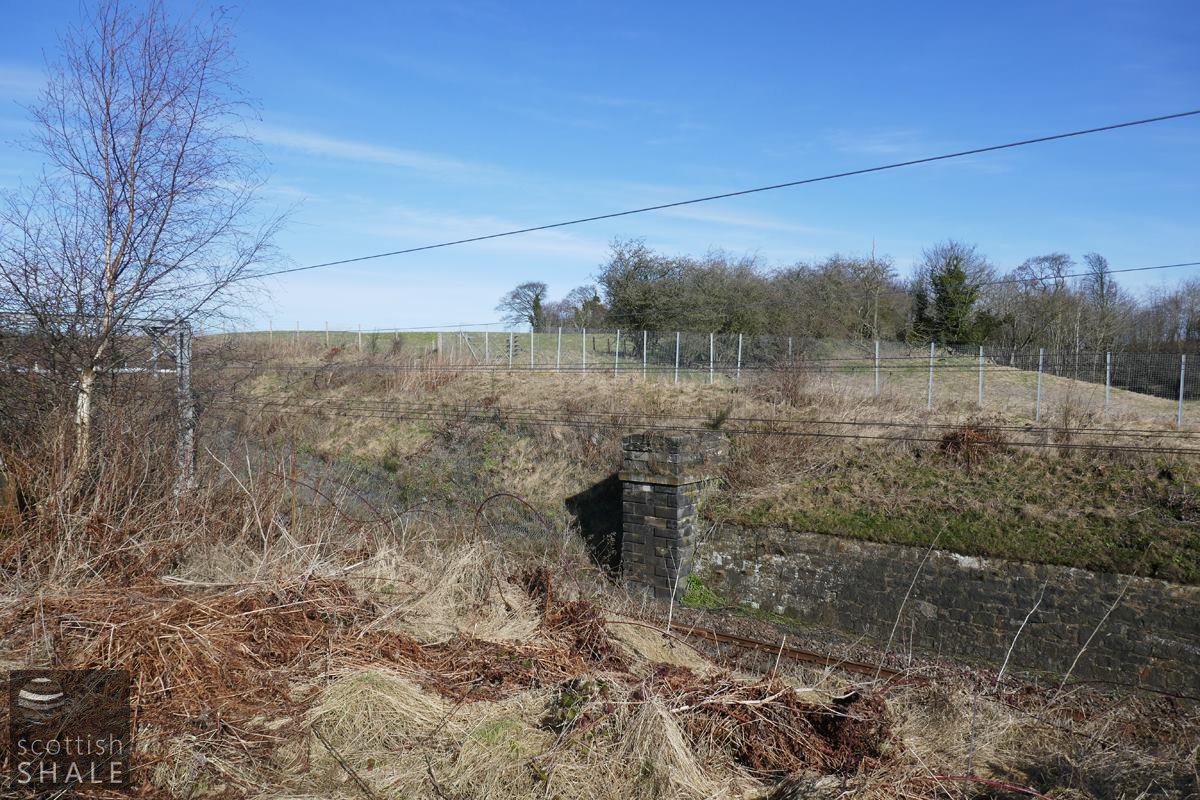 Abutment beside the Edinburgh & Glasgow railway, which supported the footbridge linking the mill and the mill dam. 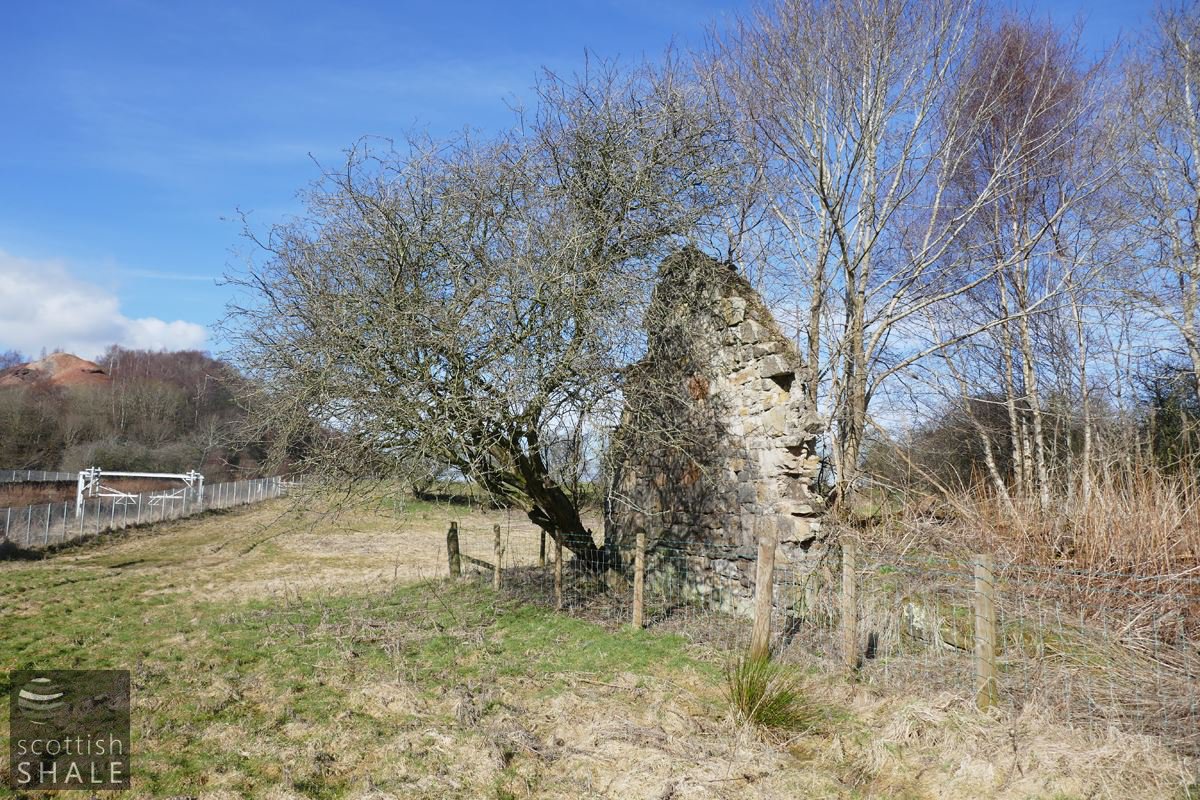 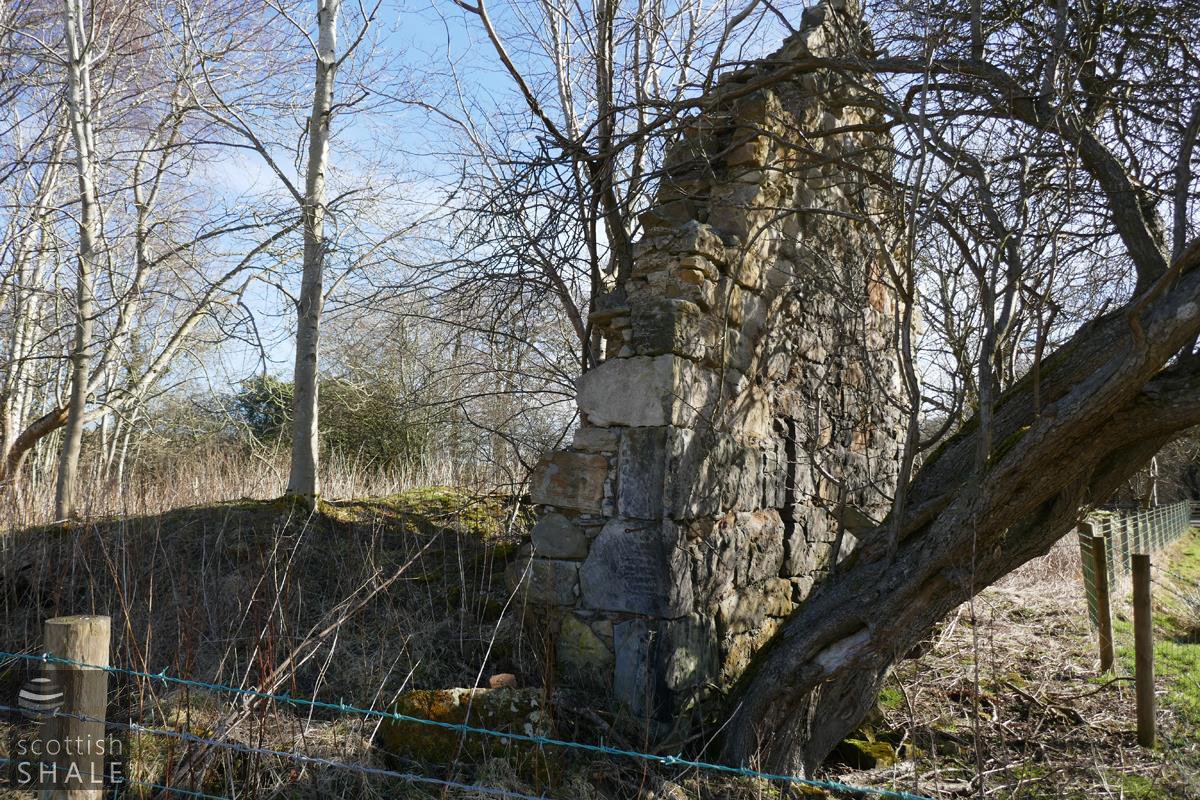 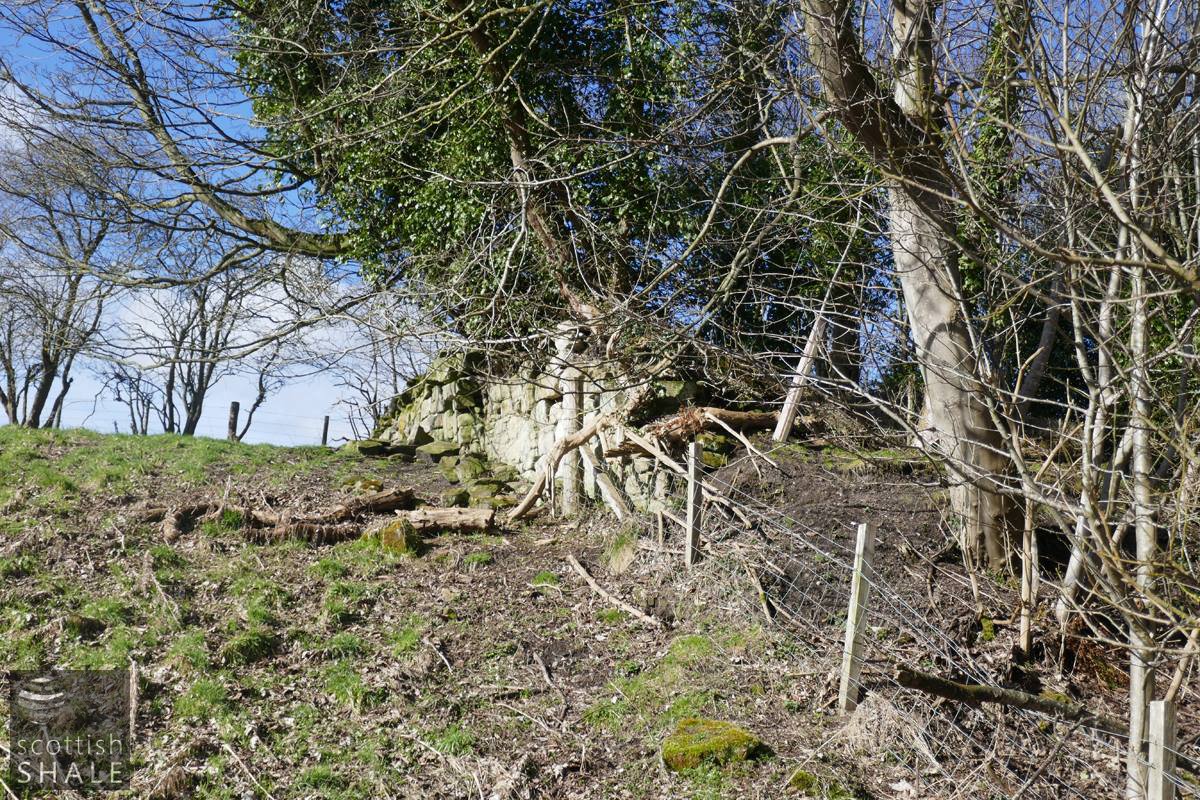 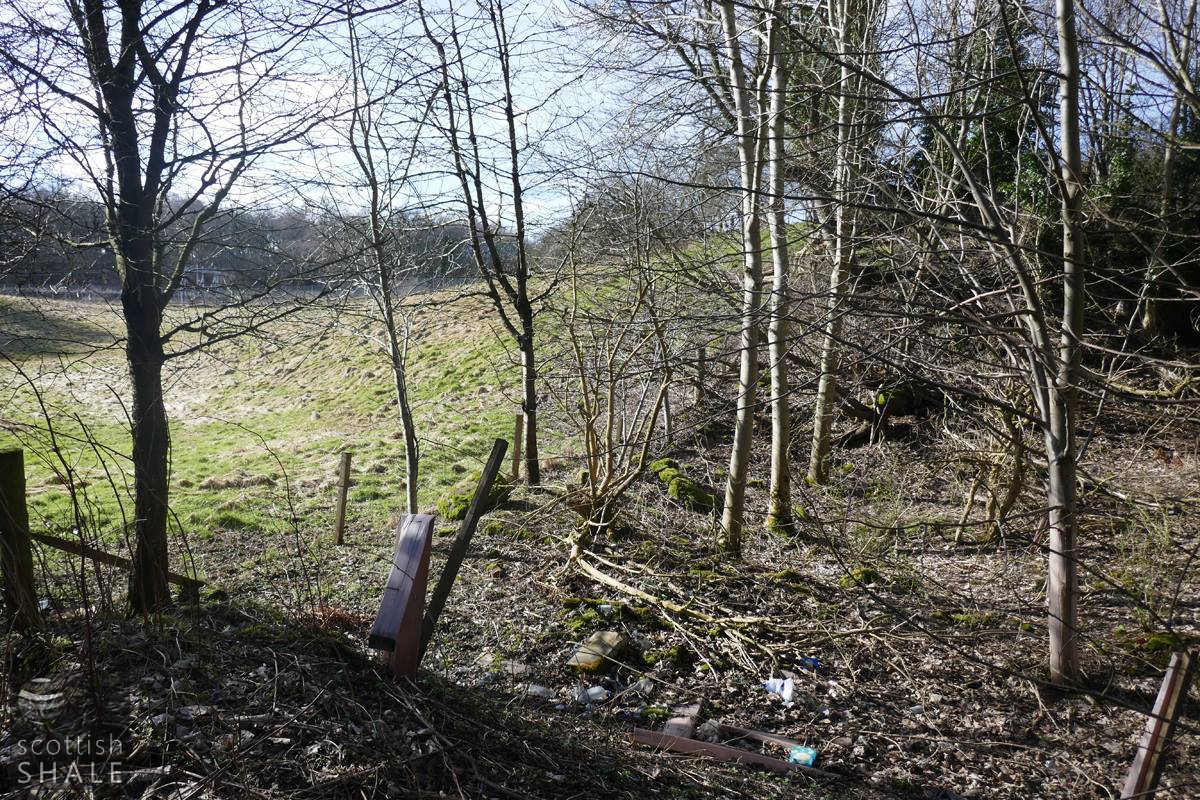 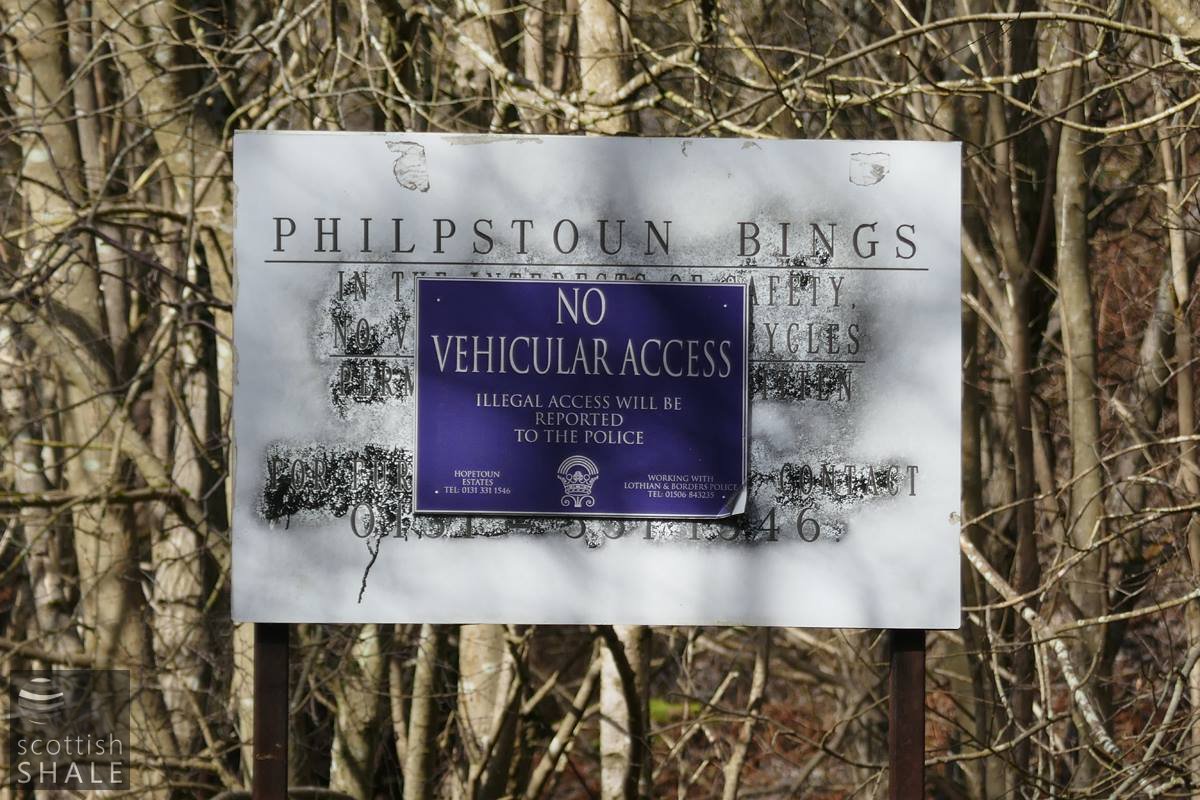 No respect for signage. 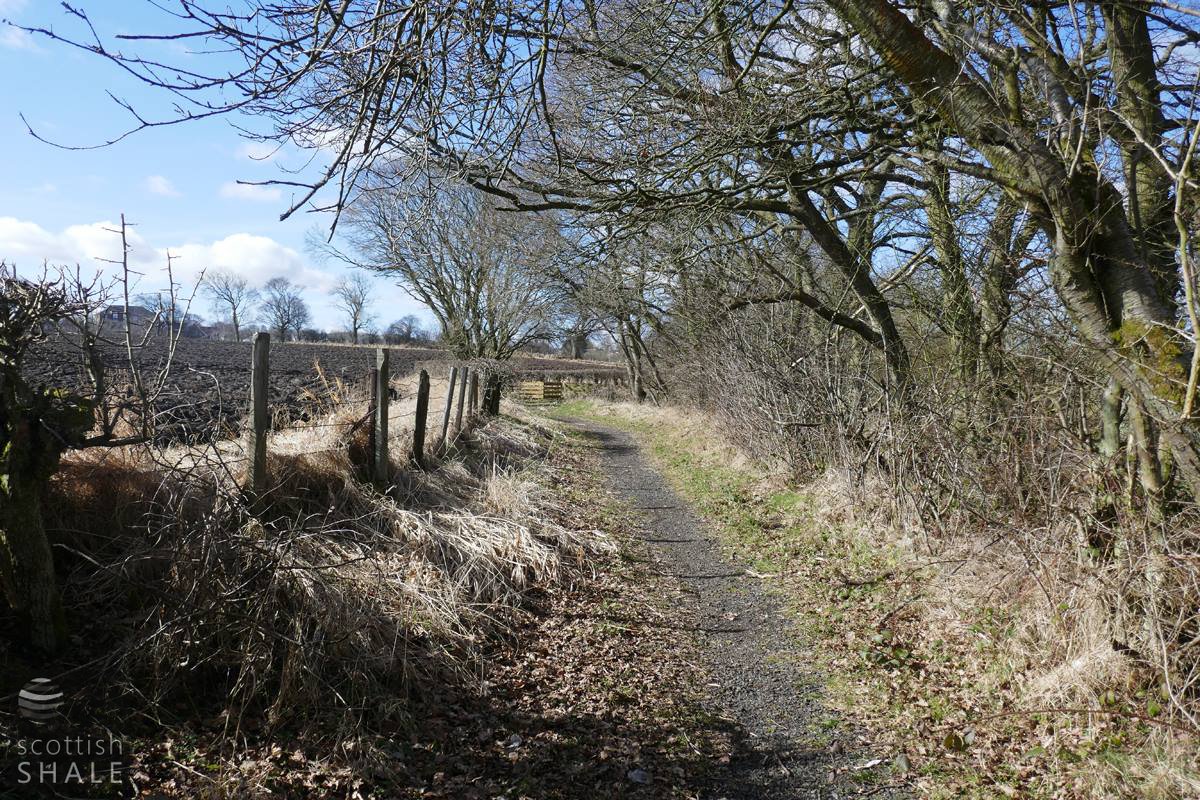 Route of the mill lade - the footpath to Bridgend. 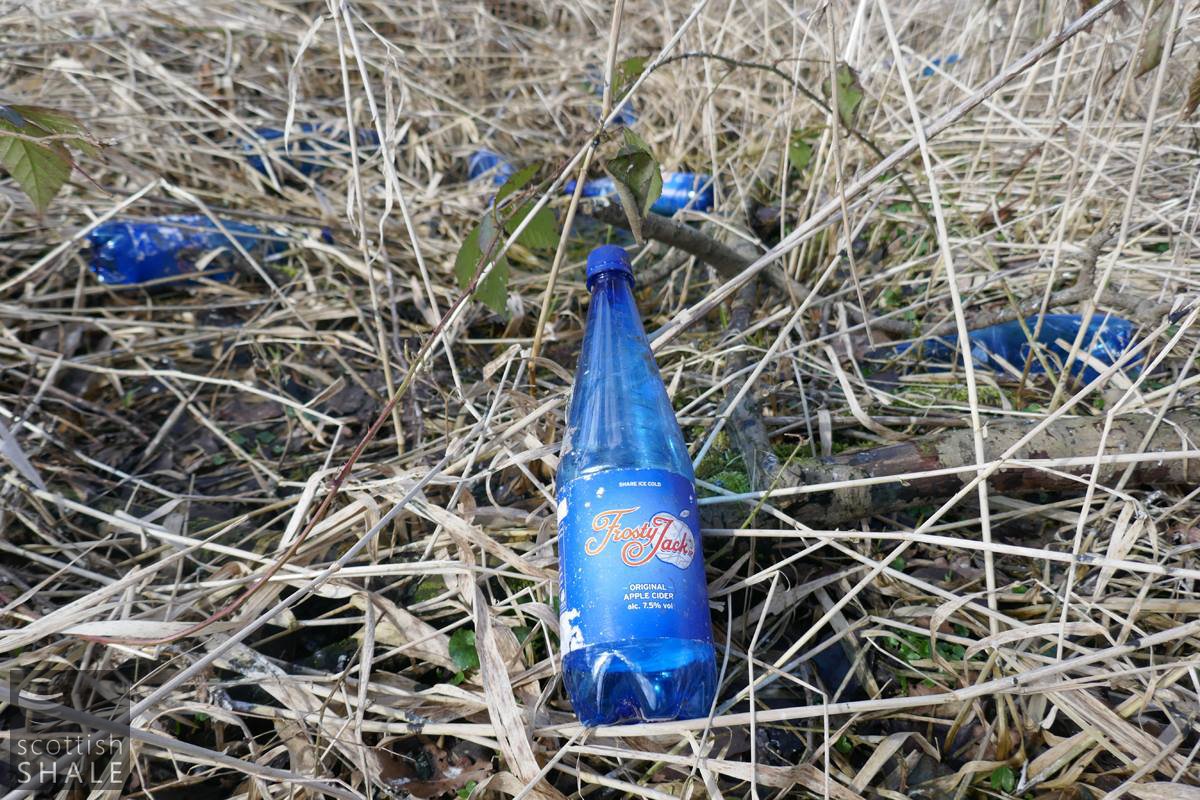 A popular meeting place for the Bridgend and District cider appreciation society. 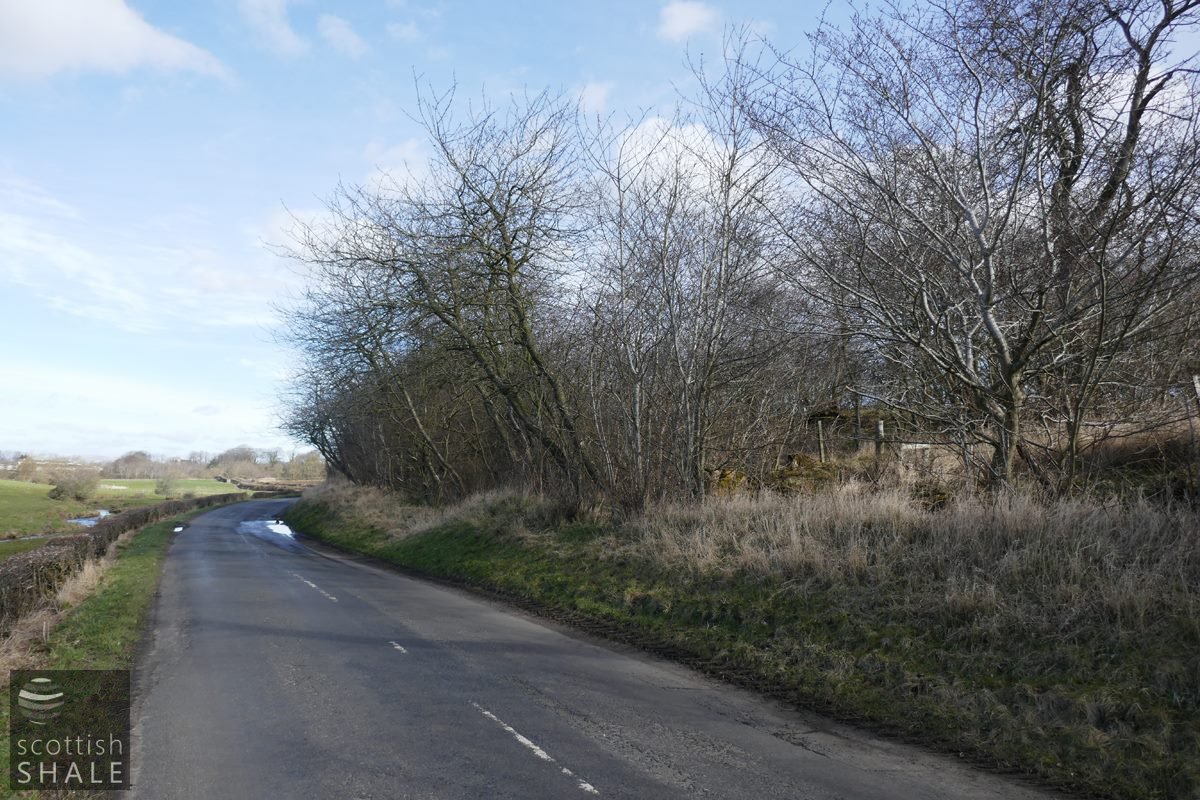 Road from Gateside, looking towards (new) Philpstoun. The trees mask a ditch following the route of the mill lade. 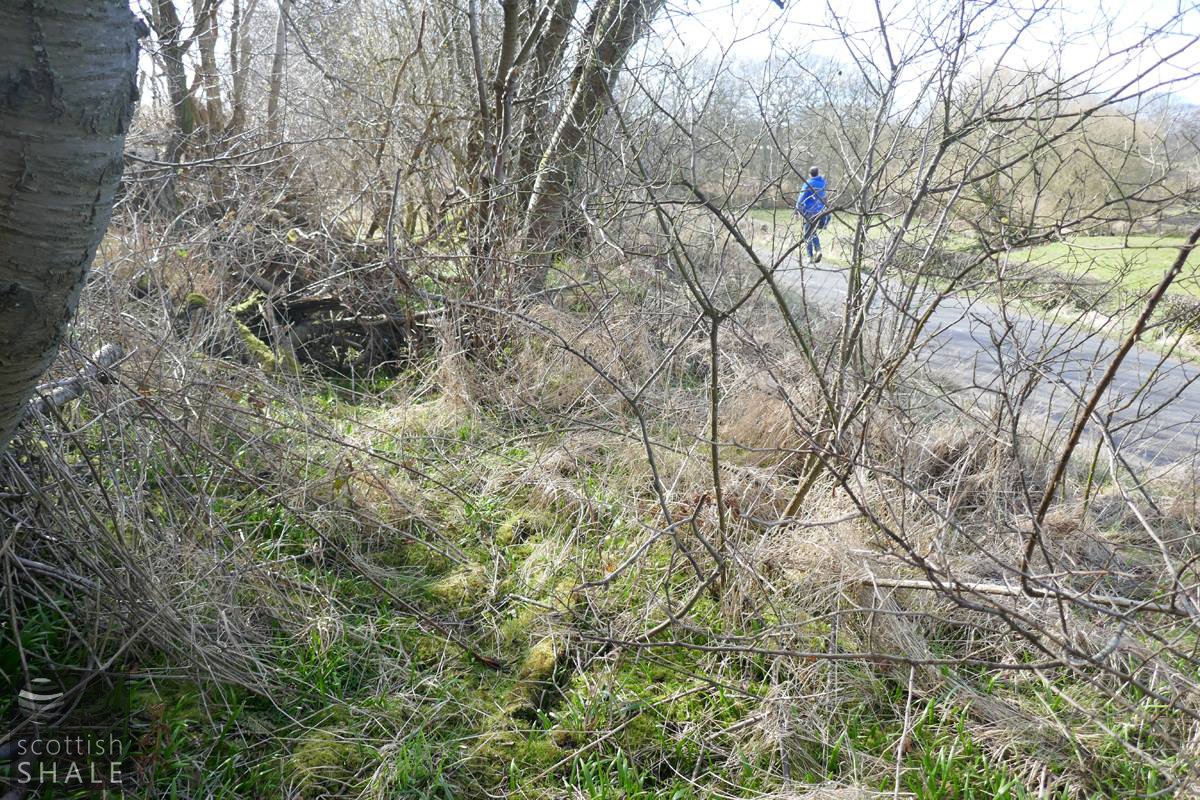 Green shoots of wild garlic mark the route of the mill lade.