The Pleasure Gardens of Gavieside

Top of the farmhouse viewed from Gavieside bridge, with the five sisters bing in the background.

Gavieside farm might at first appear an unremarkable cluster of drab agriculture sheds, surrounded by featureless fields, embellished with the occasional muddy puddle created by mining subsidence. However, clues survive to a far more elegant landscape that existed here over 250 years ago.

Roy’s military map, surveyed in the 1750’s provides a detailed and seemingly accurate picture of Gavieside (Iabelled “Gayside”) at that time. A private tree-lined road encircled the estate which was further divided by shelter-belts, with a substantial plantation of oak, ash, elm and fir cloaking the ridge overlooking Briestonhill moss. Close to the house, the land was split into a rectangular grid of gardens and orchards that spilled down the slope towards the Killandean burn. It seems that this was a landscape created for pleasure and the pursuit of game, but with a very modest country house at its heart.

Lands of Gavieside (or Gaiside) were named in documents as early as 1650, and when offered for sale in 1730, already contained a “mansion-house and double dovecoat”. The new owners seem to have soon set about planting trees and laying out the grounds to produce the landscape pictured in Roy’s map. The estate was offered for sale again in 1772 when it was described as having a “convenient mansion house with stables, coach house and others office-houses, a double dovecot and good gardens”. 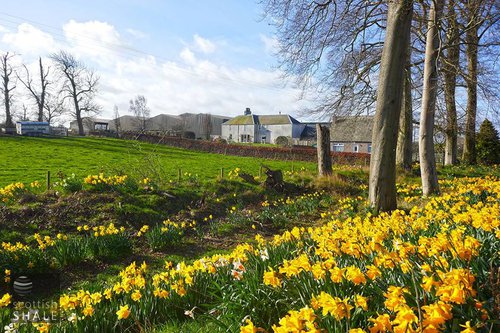 The lands, and those of the adjoining Brotherton estate, seem to have been acquired by John Davie; well known in Edinburgh as “Sooty Davie”, proprietor of a chemical works that manufactured sal ammoniac (Ammonium Chloride) from coal-soot. His partner in this business was the renowned Scottish scientist James Hutton, now considered to be the father of modern geology.

John “Sooty” Davie married Mary Flint, whose family owned lands in Polbeth. The couple raised six daughters, before the arrival of their first and only son, Adam.

Adam Davie obtained a lieutenancy in the 75th Regiment in 1787 and spent most of the following decade coordinating recruitment from his base in Edinburgh. When ultimately stationed to India, he soon faced court martial for attempting to abscond back to Britain without proper approval, although was he eventually acquitted. In 1803 he accepted (reluctantly it seems) command of the British garrison in Kandy as part of a campaign to oust the Dutch and take control of Ceylon. Adam was later described as a “well-disposed inoffensive man without any practical experience of hostile military operations”. When the garrison was attacked, Adam Davie and his forces retreated, leaving behind the sick and wounded who were subsequently slaughtered. Following a complex sequence of dubious decisions, starvation, sickness, and desertion, the small British force was surrounded, and persuaded to lay down their arms. They were then clubbed to death. It was not one of the finest episodes in British imperial history.

Adam Davie was placed under a form of open arrest by the native authorities in Ceylon, and it was said that he then “adopted the dress and habits of the natives”. He collapsed and died in a street in Kandy, nine years later. Notices of his death contained reassurance that “he died a natural death and the reports that were so often in circulation regarding his mutilation and torture were totally unfounded”.

In 1803, soon after the fall of the Kandy garrison, Adam’s father, John “Sooty” Davie, died at the age of 77. As Adam left no living heir, the succession to the Gavieside estate and other properties became complicated. Gavieside was put on the market many times between 1810 and 1832, but consistently failed to reach the upset price.

It might be imagined that the Davie family made their home at the larger Brotherton House during this period. Advertisements for Gavieside no longer made mentioned of a “mansion house”; merely a “small dwelling house” and then simply that the site offered “advantageous situations for a cottage or dwelling house”

It appears that, in about 1813, the family appointed “an East Lothian greive of experience” to manage the farm and during that decade built a steading of offices, constructed from sandstone quarried less than a hundred yards from site. In 1824 a new farm house was built, described as having “a kitchen, servant’s room, and a dining room below, with three good bedrooms above stairs” 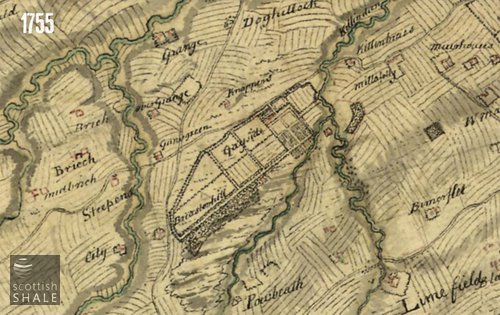 There remained hope that the land might be purchased as site for a fine country residence. In best estate agent hyperbole an advert of 1825 stated:

“few properties near Edinburgh possess so many advantages for a residence or a villa, beside the 20 acres of wood, in separate enclosure, the fields and walks (which are numerous and secluded) are interspersed with oaks and beeches of considerable age and value, and a running stream passes through the most sheltered part of the ground. There is a new and handsome steading of offices on the premises, with a dwelling house for the overseer attached of five rooms, built only last year, which might serve for a shooting box, or summer quarters for a small family”.

It seems that by the 1830's, the lands were controlled by John Davie Martin, son of Euphemia, the third daughter of “Sooty” and Mary Davie. In 1855, John Davie Martin, described as “of Brotherton, late of Gavieside, wood merchant, cattle dealer, dairyman and dealer in farm produce” was declared bankrupt.
The first OS map, surveyed at about that time, showed that much of woodland had been felled and many ornamental features obliterated. The land was then bought by John Storry, who within five years was earning significant income through letting mineral rights to the West Calder Oil Company – but that’s another story.

The rectangular layout of the farm buildings shown on the 1850’s OS map survived until fairly recent times, although the building at the western end of the quadrangle seems to have eventually made way for a large steel shed. The two buildings that fall the sides of the quadrangle (one of which is clearly visible from the road) are of a curious design, each incorporating a fine stone arch at floor level that seems to serve no practical purpose. Presumable both form part of the “handsome steading of offices” built in about1815. The current Gavieside farmhouse is seemingly the solid five room building constructed c.1824. Field boundaries, banks, and lines of trees to the east of the farmhouse preserve a little of the layout of the original estate.

Two ornamental gate pillars guard the entrance to the farm, which seem to have been restored and moved back from the edge of the road in recent years. They are marked on the 1853 OS map – and it would be nice to think could be relics of the early history of the site, and the lost mansion house.

The entire landscape of Gavieside seems set to radically change with advanced plans for construction of 2,500 new houses in an area of development extending from West Calder to West Long Livingston Toll. The older buildings of Gavieside farm are B-listed, but this provides no absolute guarantee of their survival, and the current masterplan appears to make no specific plans for their retention. The archaeological assessment commissioned as part of the outline planning consent urges retention of historic structures, but also envisages a situation in which this heritage is only preserved as records of building surveys and archaeological fieldwork. 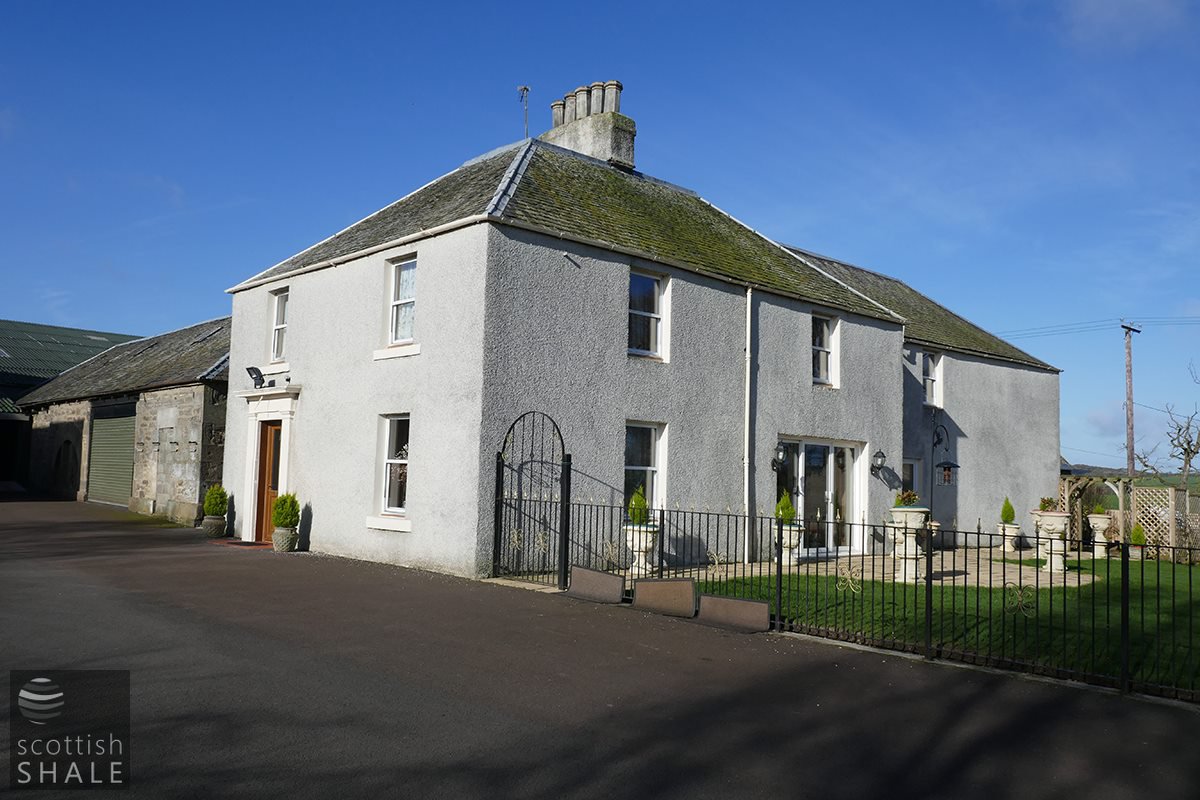 The farmhouse building - the main block seems to be the five-room structure built in about 1824. 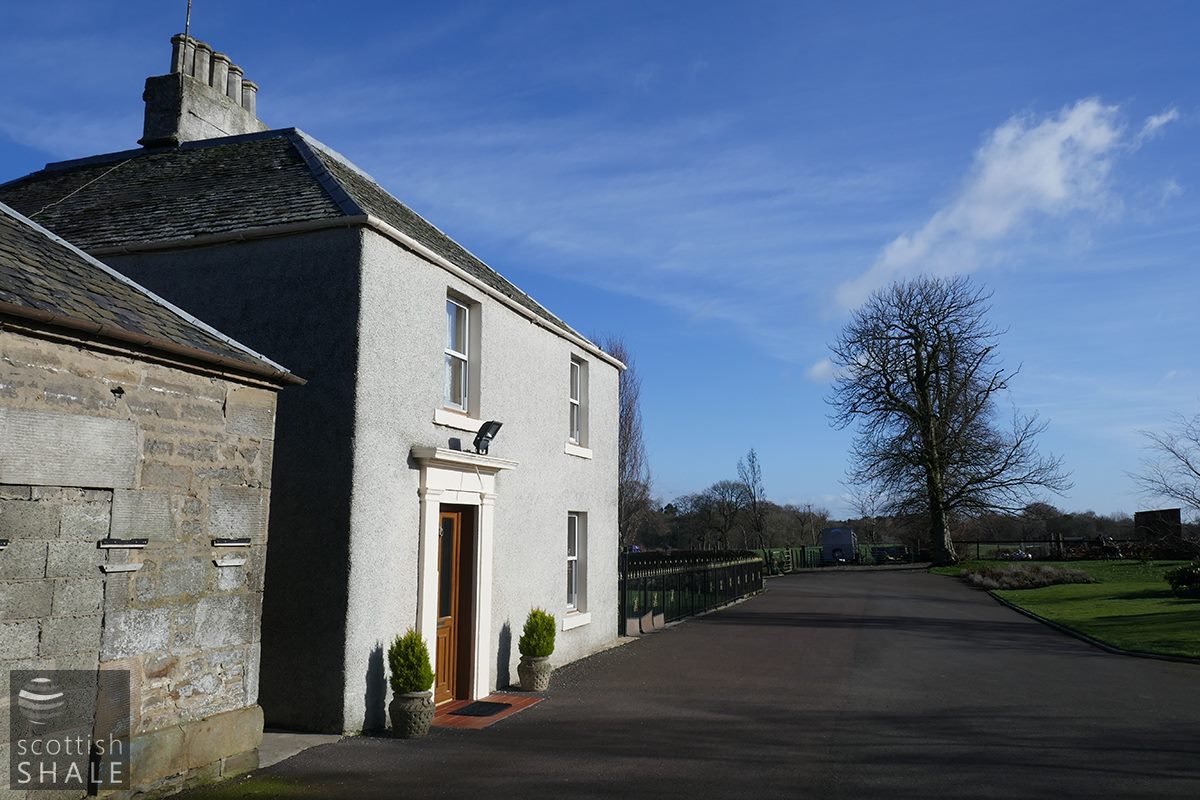 Gavieside farmhouse, looking towards a line of trees and low bank which seem remnants of the original planned landscape. 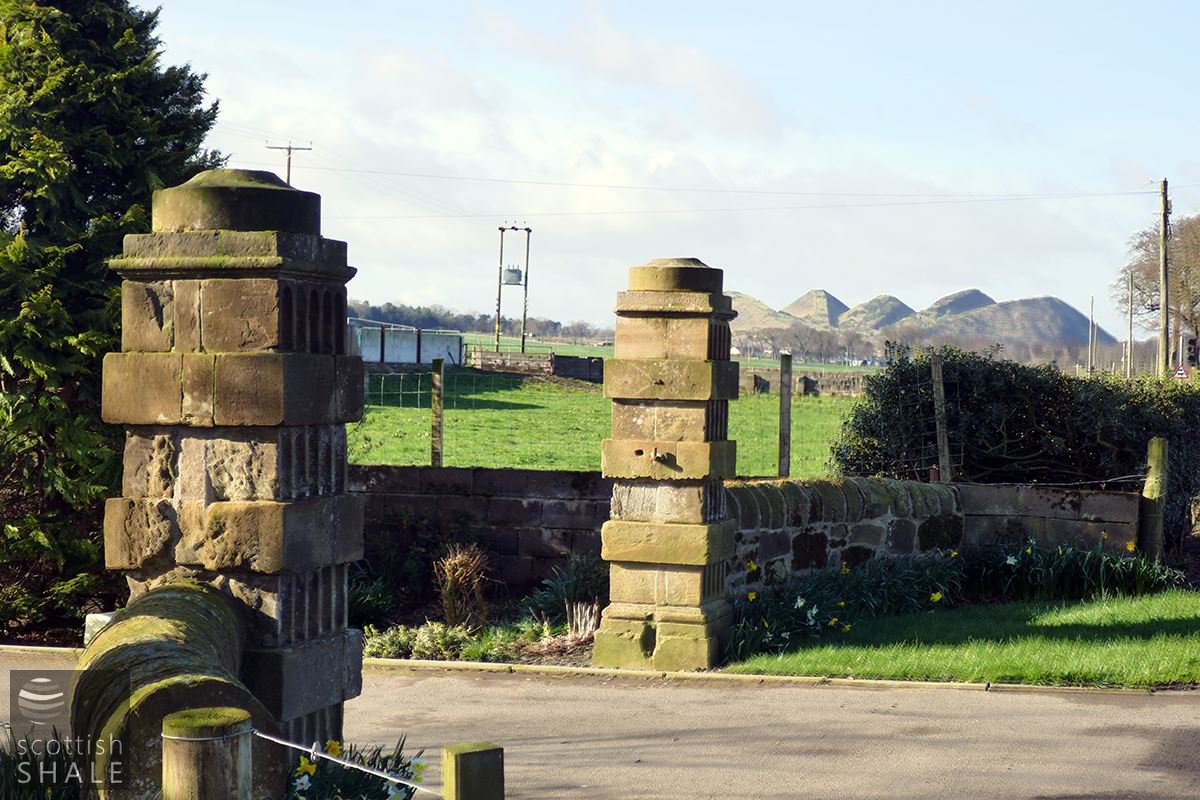 The ornamental entrance pillars, in their new location. 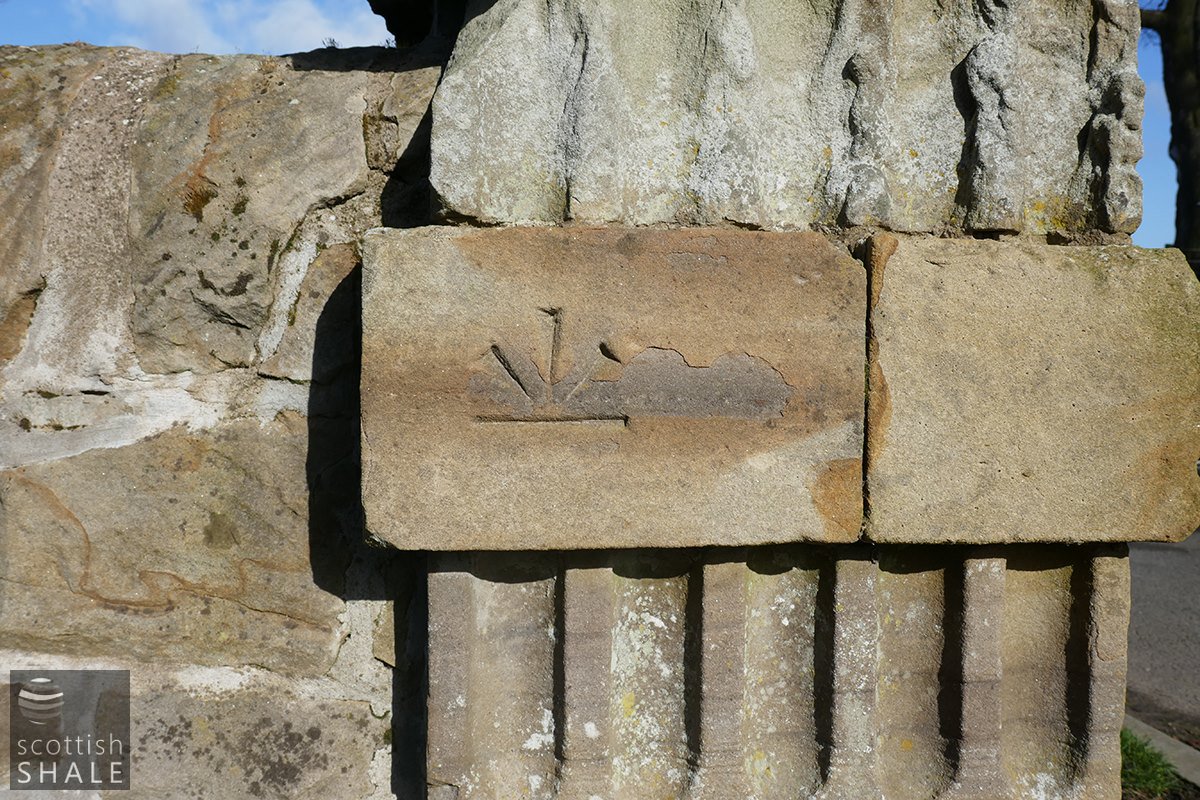 Benchmark on one of the pillars, which is marked on the 1853 map. 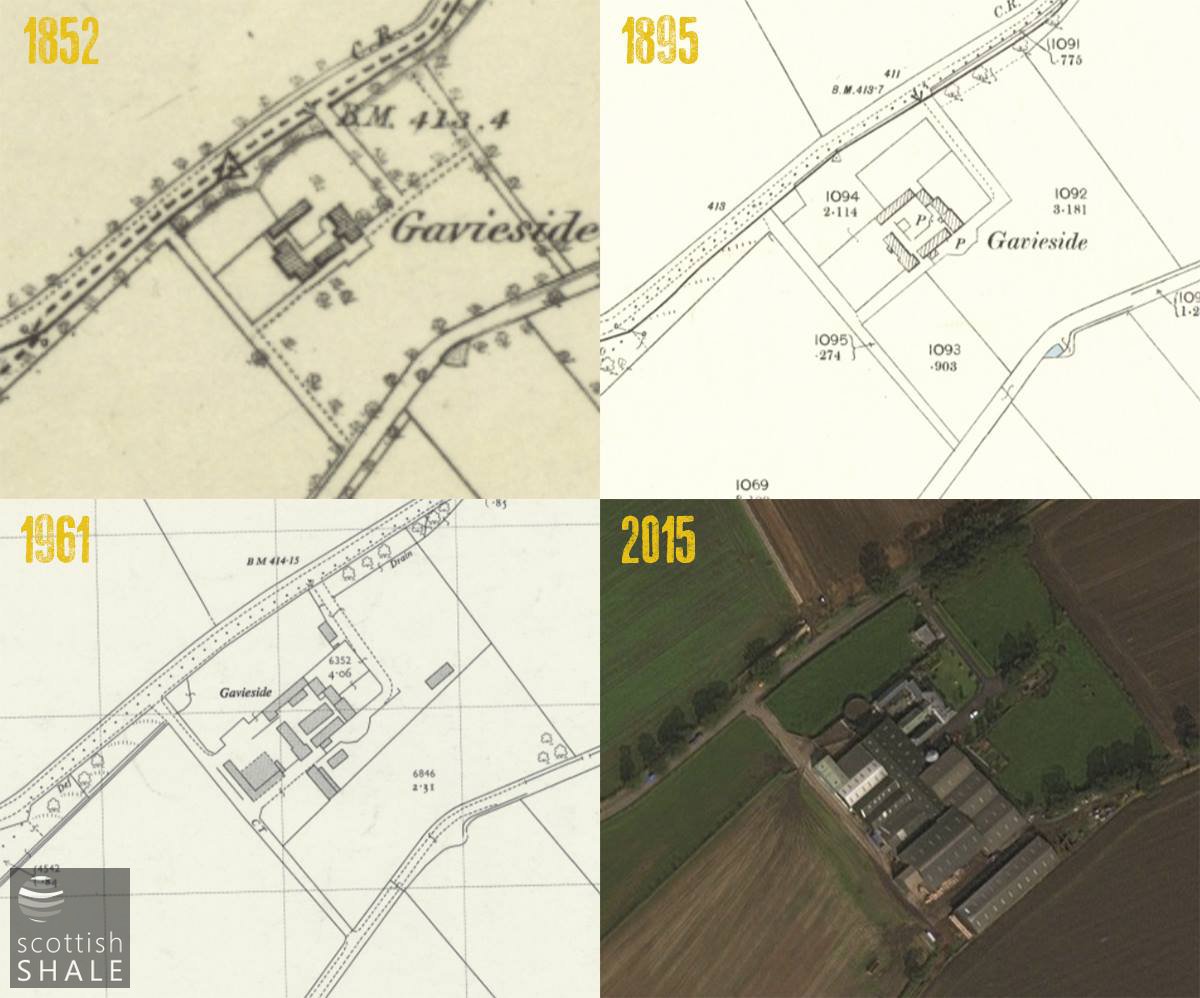 Development through the ages. National Library of Scotland. 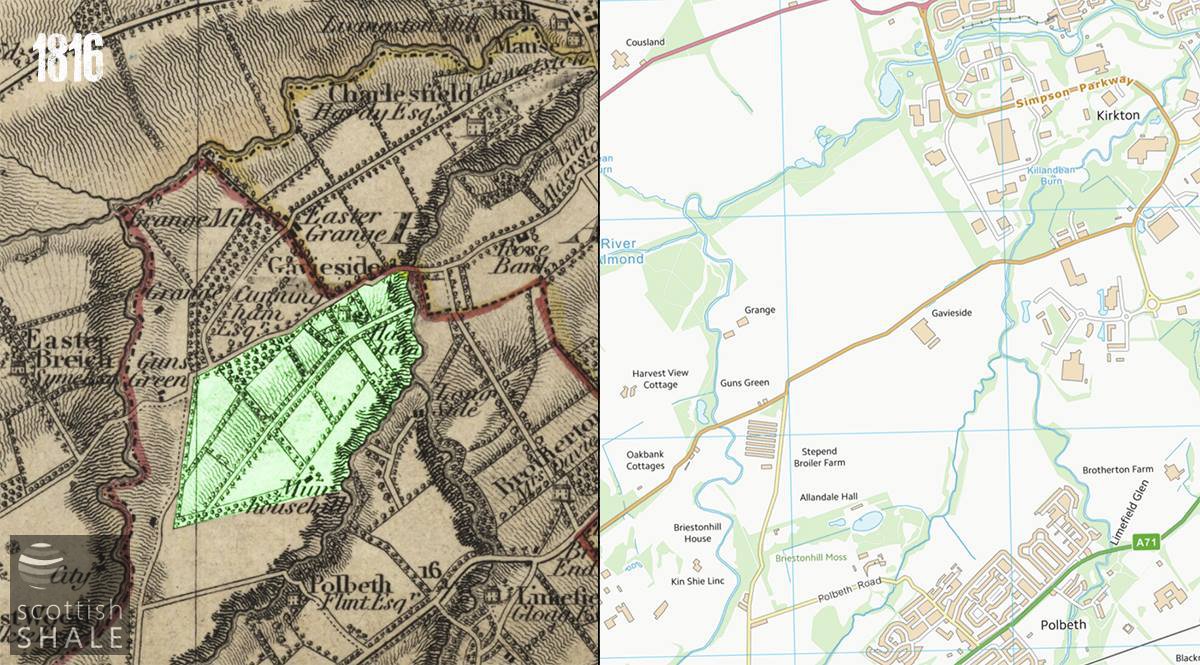 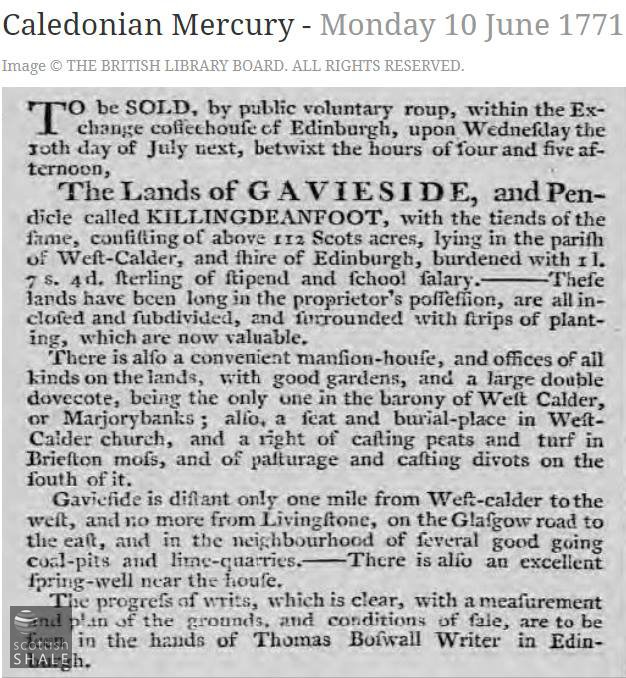 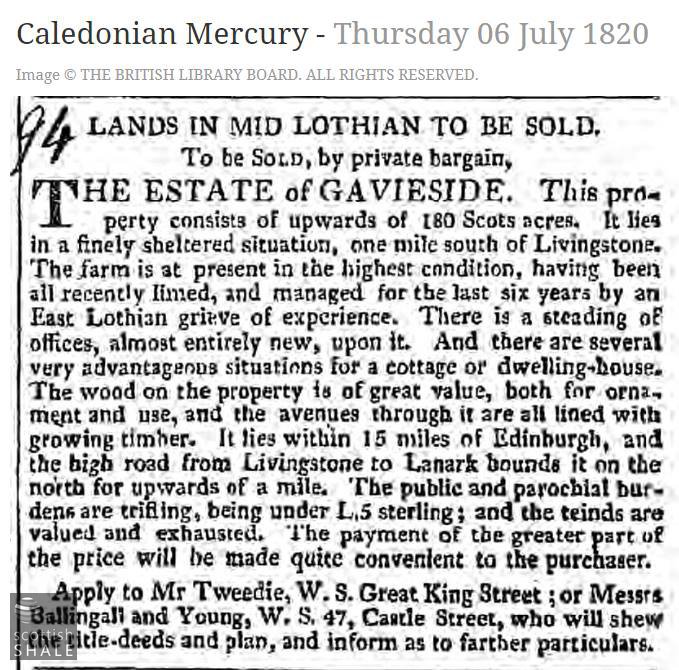 For sale in 1820, with new steading of offices. 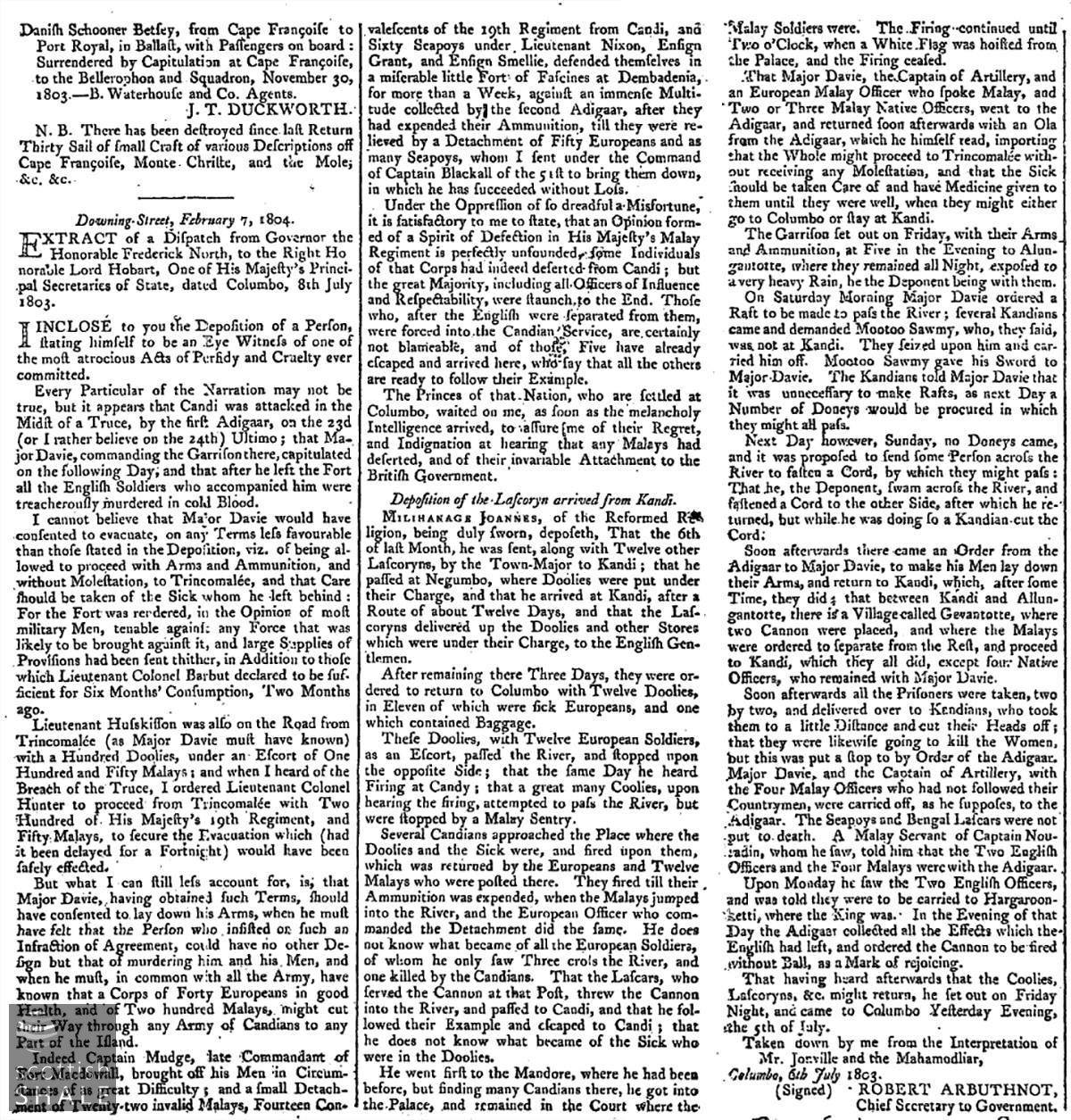 Report of a Gavieside man tragically out of his depth.
From the London Gazette. 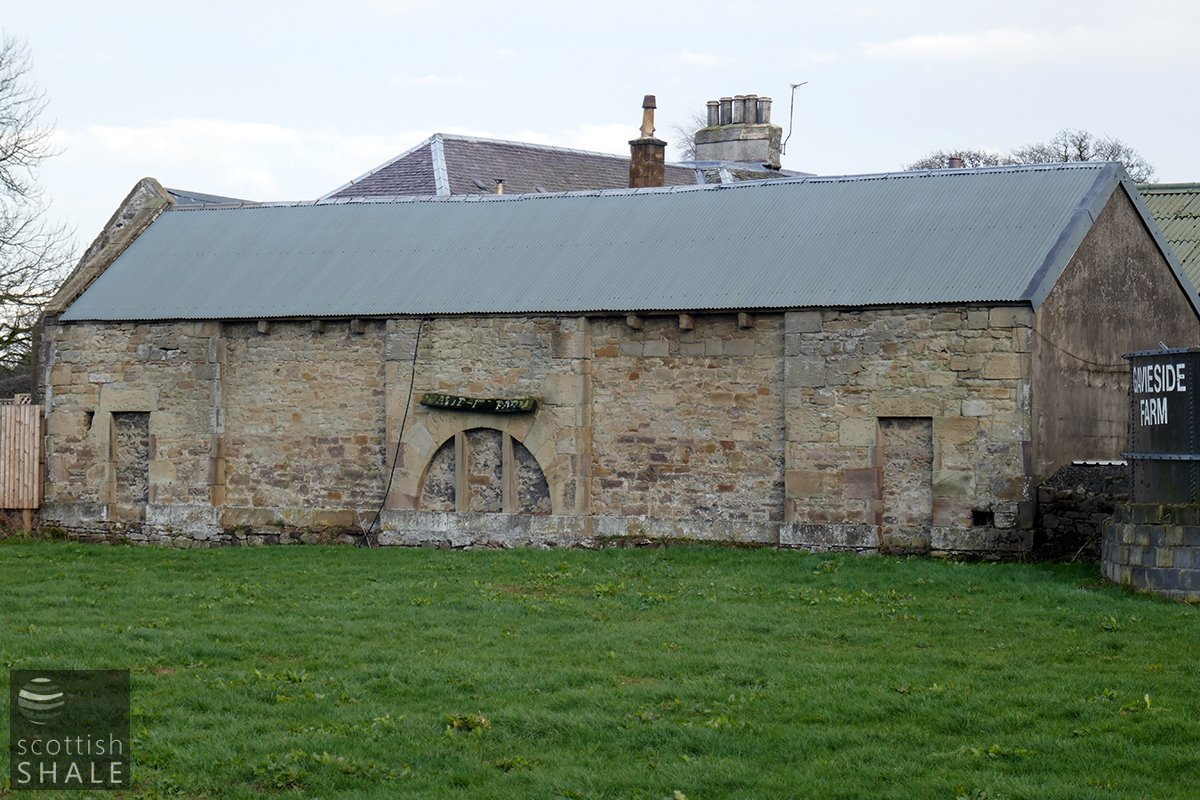 A curious part of the c.1815 farm offices, with arch that seems to serve no practical purpose. The land in the foreground appears to have subsided a considerable distance to expose substantial foundations. Or might these be the walls of an earlier house? 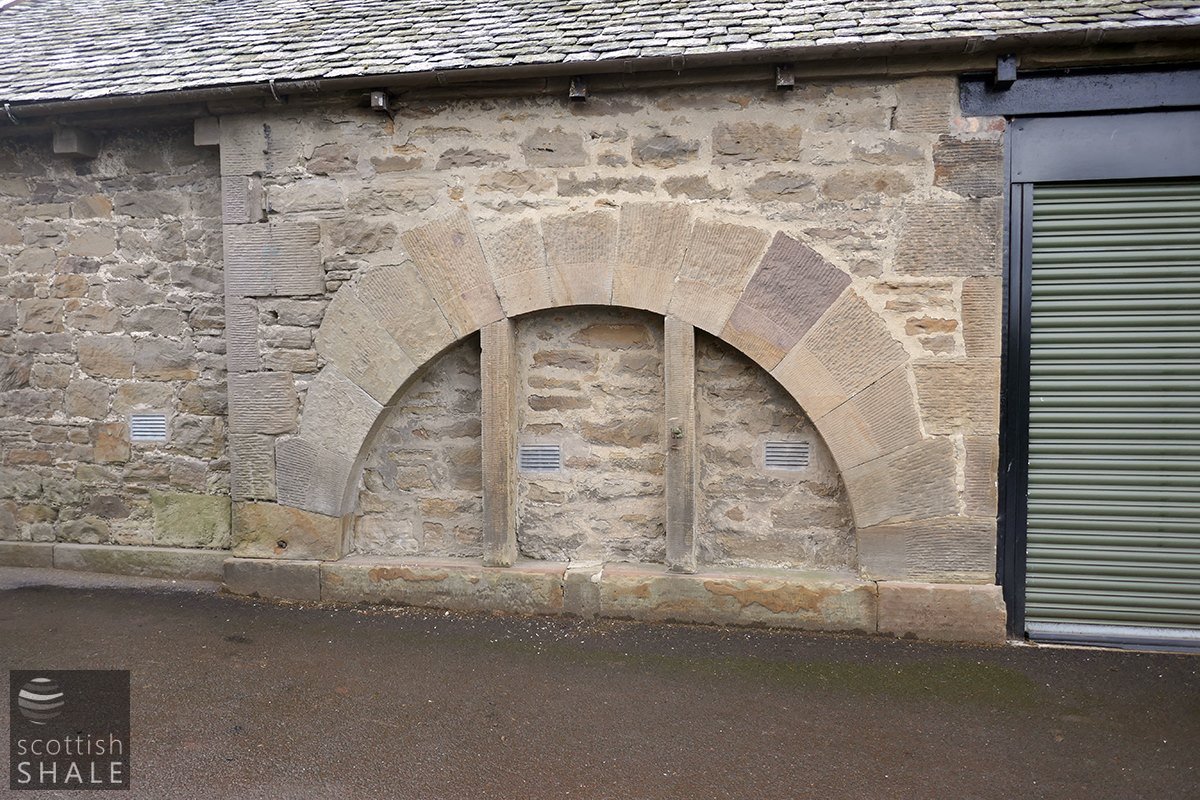 The matching arch on the southern steading building. 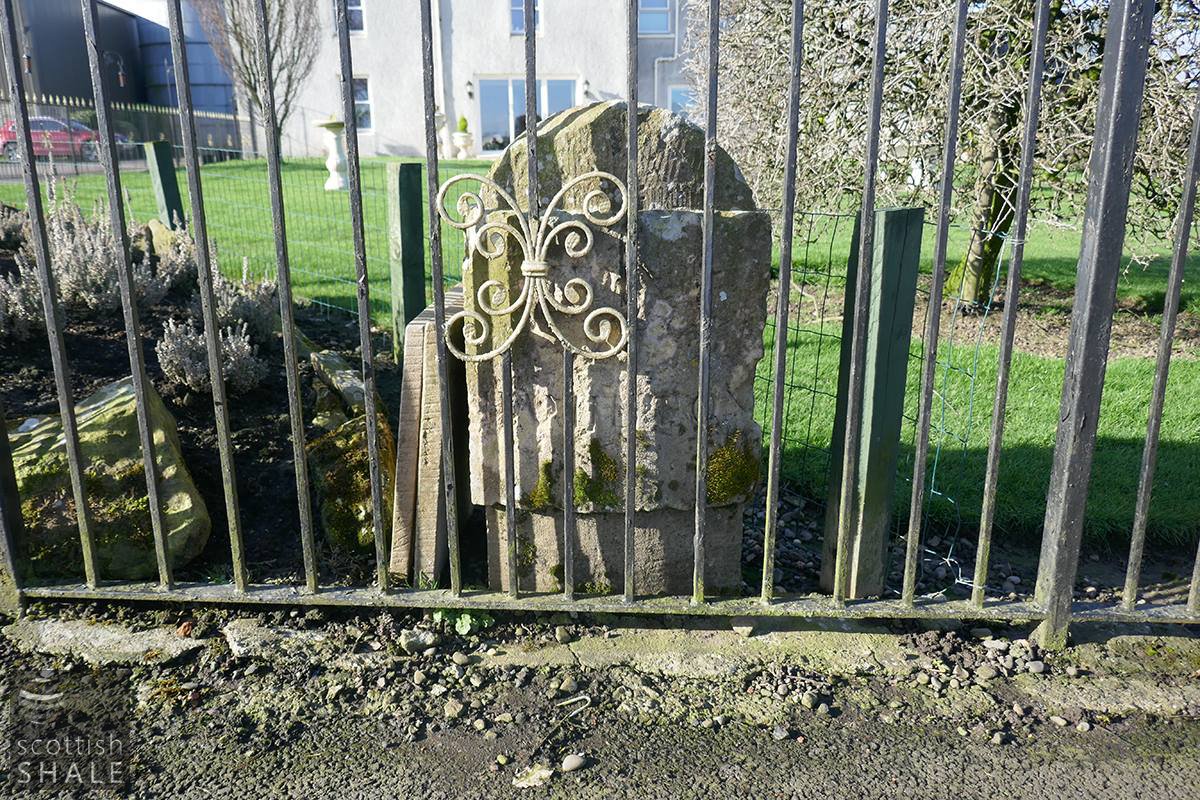 A captive milestone, no doubt moved from the nearby turnpike road. 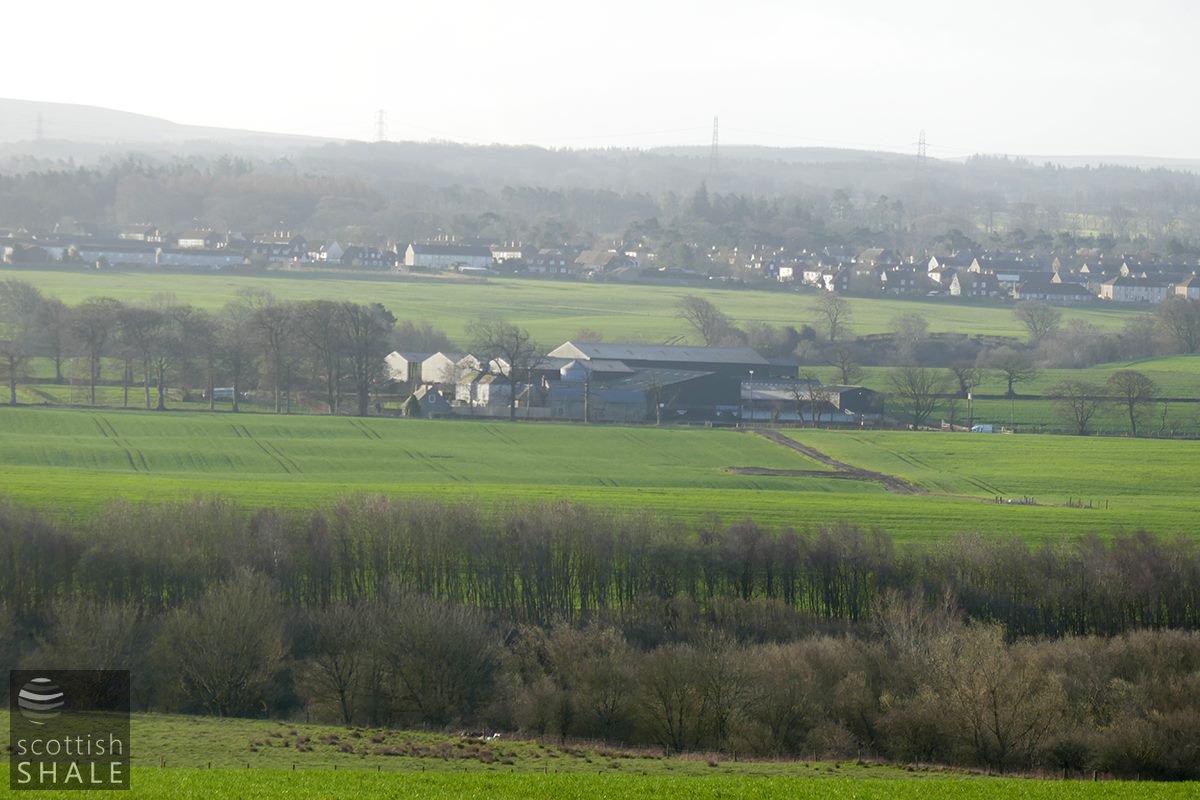 A misty view from the Seafield road, with Polbeth in the background.