The Remains of South Cobbinshaw

The shale village of South Cobbinshaw 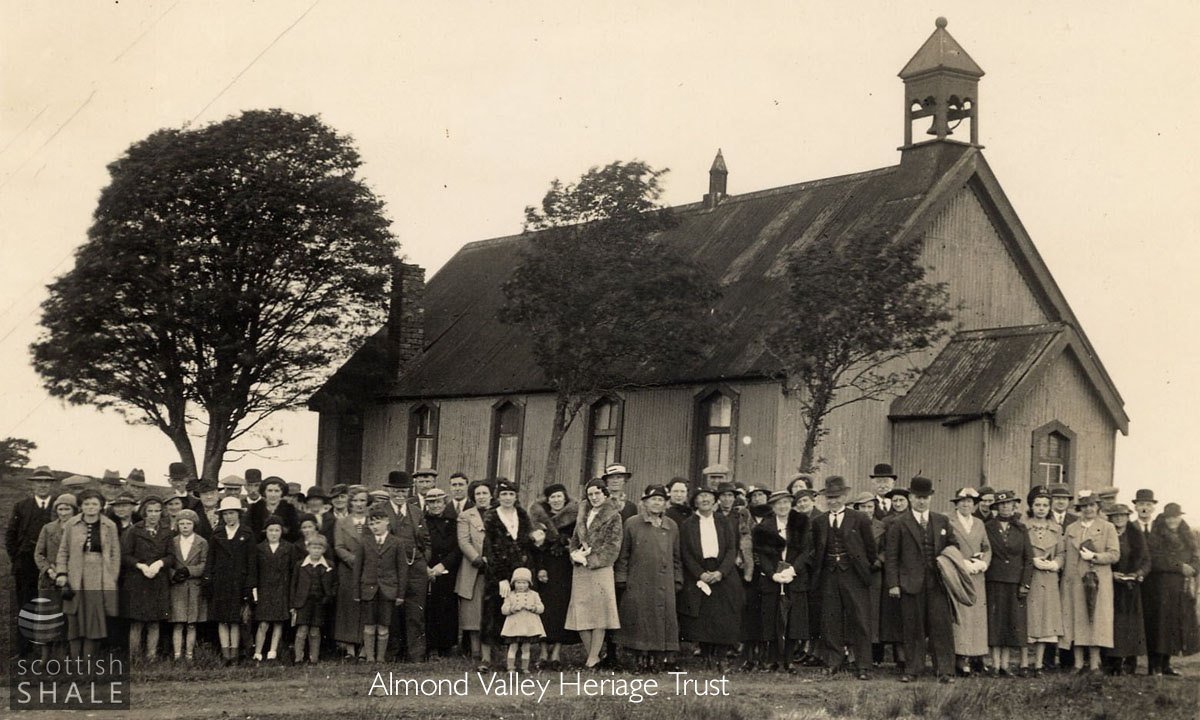 Cobbinshaw church and congregation in its final days.Thanks to John Kennaway for the picture. 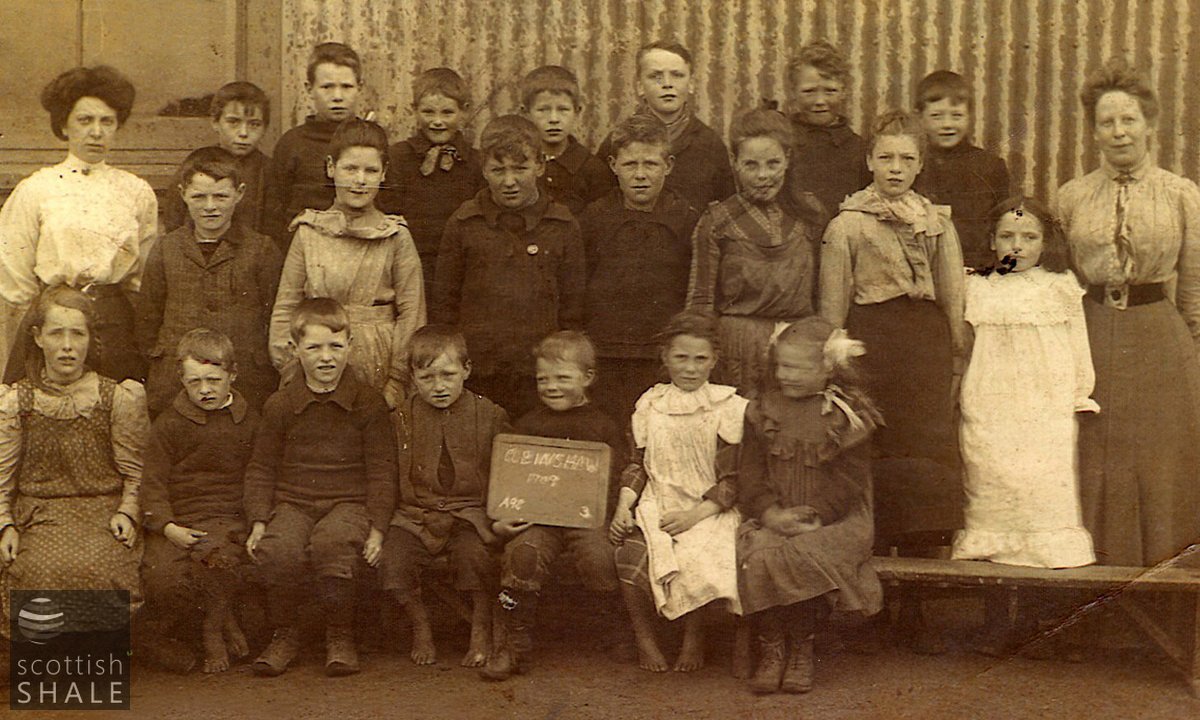 A remote rush-grown field, more than half a mile from the nearest public road, was once the site of South Cobbinshaw village, and home to over 250 people. Industry was first brought to the area by the promise of rich seams of oilshale that lay beneath the waterlogged wastes of Cobbinshaw moss, however business and mining interests never went smoothly at South Cobbinshaw, and during much of the life of the village, its houses lay empty and abandoned. 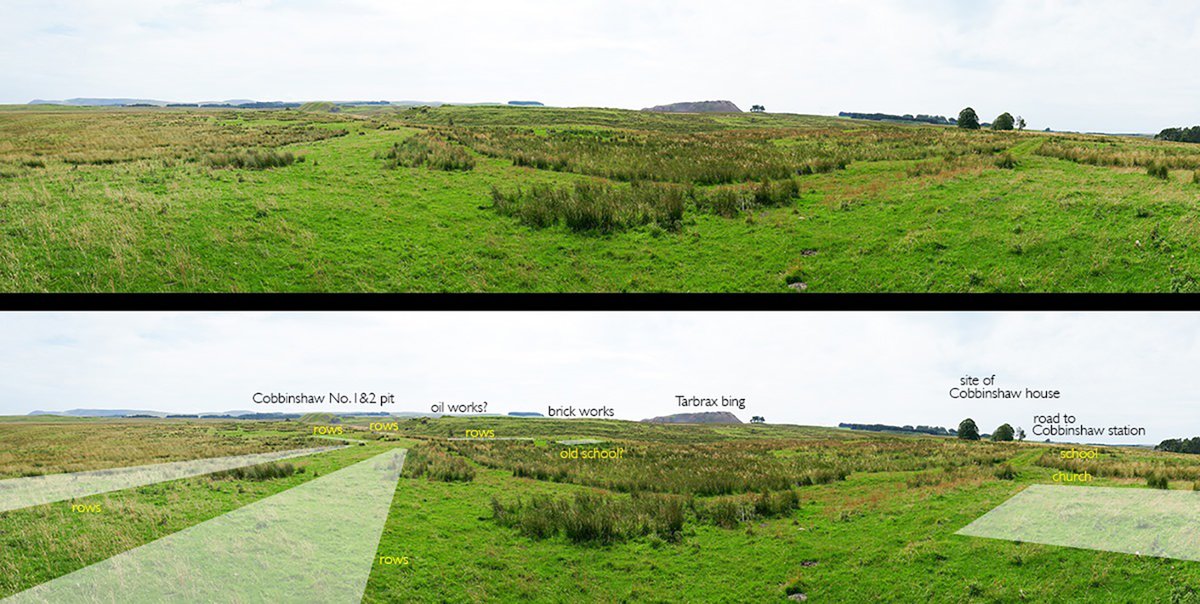 Panoramic view of the village site, with site of buildings roughly marked on it. 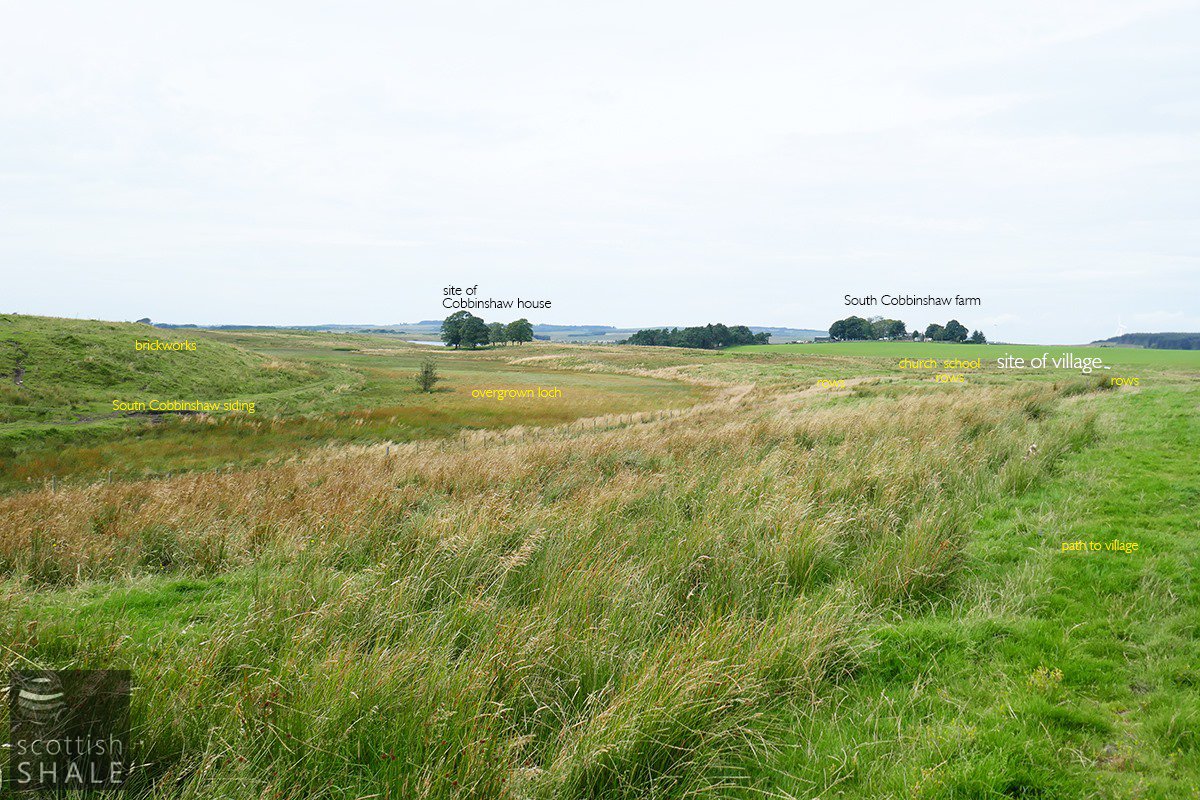 The West Calder Oil Company, whose main works were at Gavieside, were the first to secure the rights to mine at South Cobbinshaw; however their plans to build a shale oil works there, and housing for its workforce, came to nothing. An area of the land was however sub-let to mining engineer Jonathan Hyslop and two Edinburgh businessmen trading as the South Cobbinshaw Oil Co., who in about 1870 established a small-scale crude oil works and a brickworks on a site south of Cobbinshaw Loch overlooking the heather-clad moor. A village to house the workforce was constructed on a gentle south-facing slope, separated from the oil and brickworks by a shallow inlet of the loch and the mineral railway that linked the works to the Caledonian railway. Jonathan Hyslop, who personally oversaw operations, seems to have occupied a substantial villa just over the brow of the hill from the workman's village. Hyslop was a man of high moral purpose and a vigorous proponent of temperance who ensured that the company built a “substantial wooden structure” to house a school.

While the oil works seem to have been a limited success, the manufacture of bricks grew into a substantial business and continued until about 1880. At that time, the property was bought by Young's Paraffin Light and Mineral Oil Co. Ltd., who for a short period resumed shale mining in the area. Efforts were also made to continue brick production under different ownership, but machinery was finally sold off in 1888. During this difficult period, many houses in South Cobbinshaw lay empty, or were rented on a month-to-month basis to local miners and railway workers. 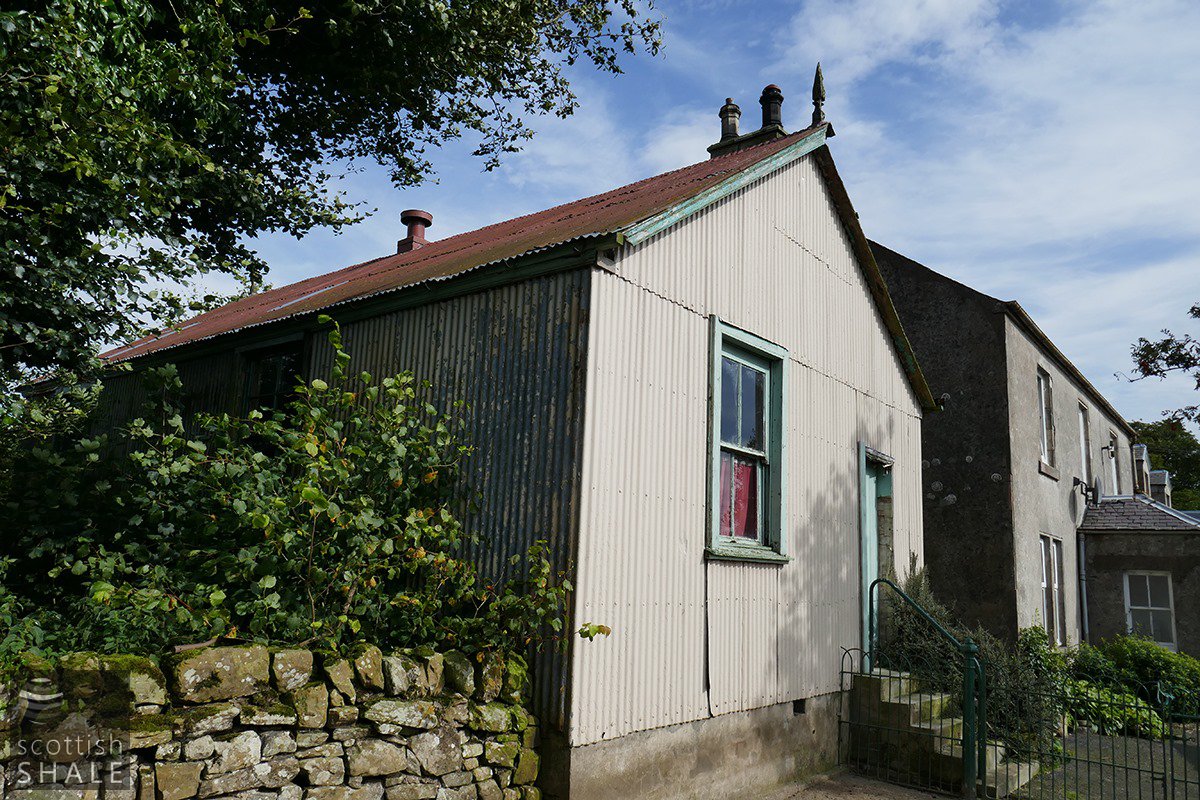 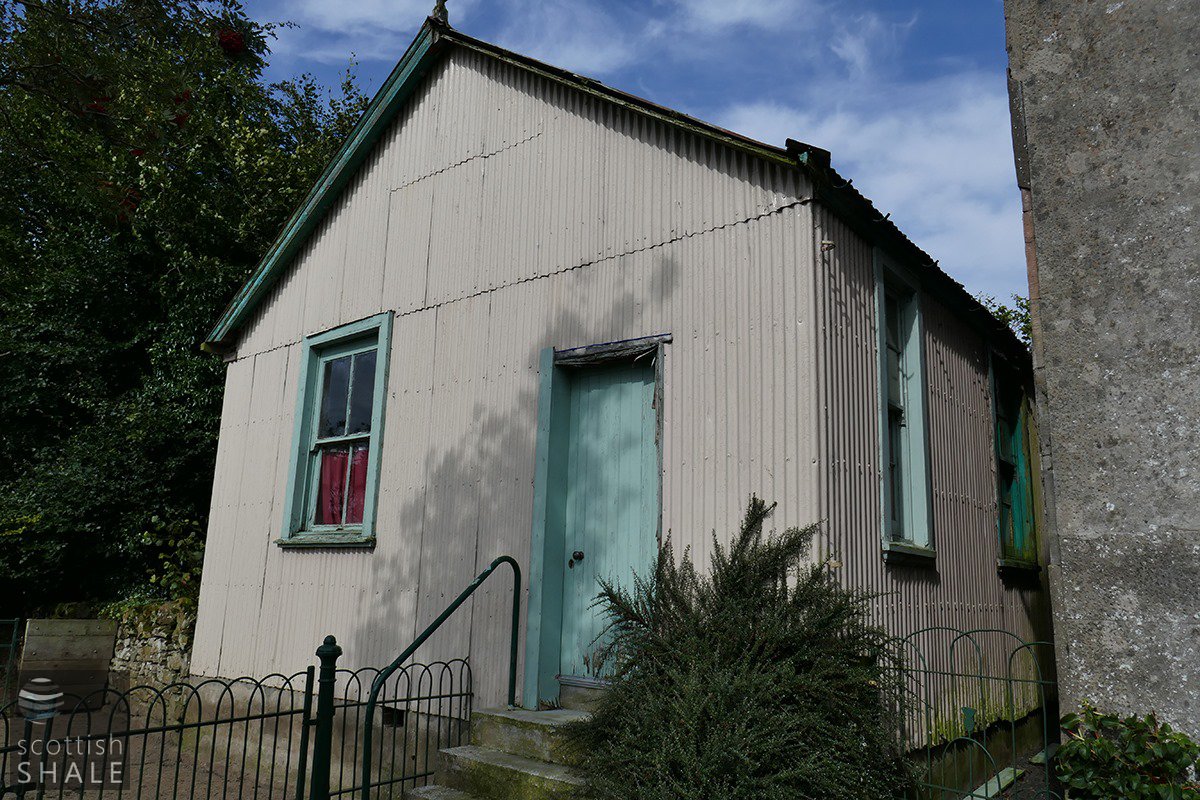 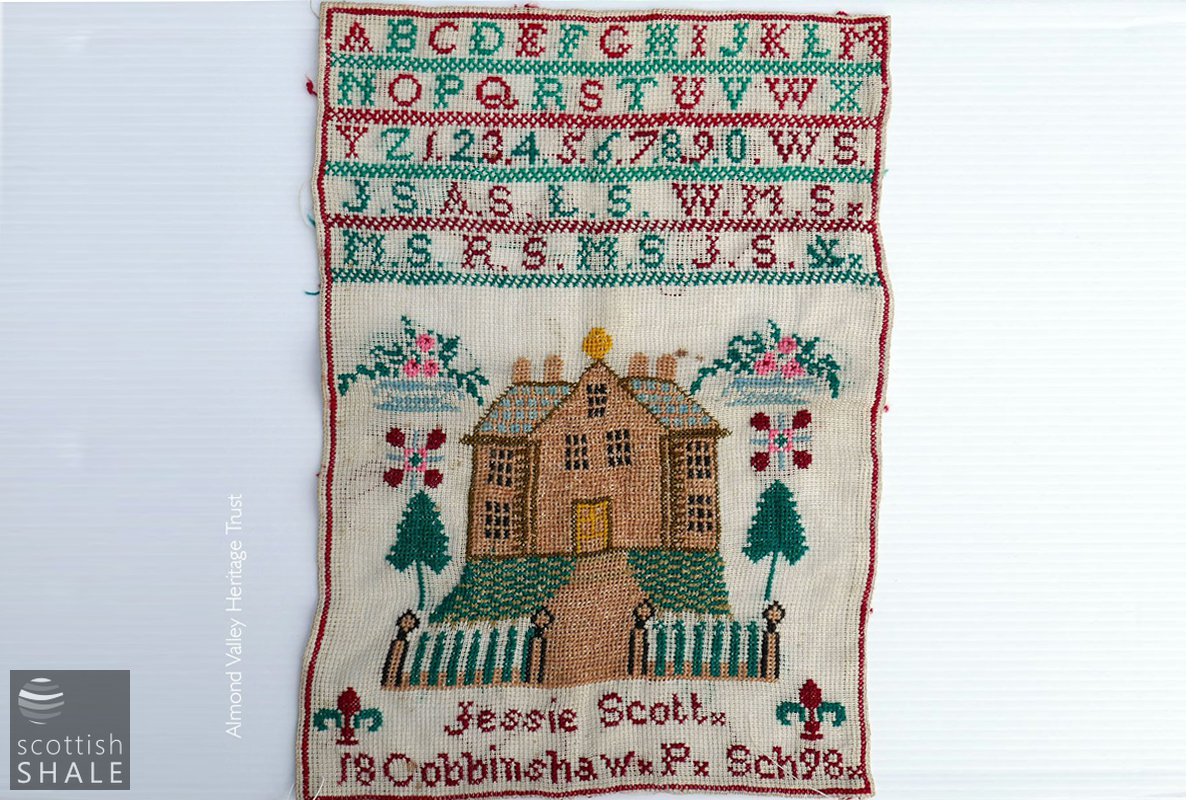 In 1889, the Caledonian Mineral Oil Co. was formed to reconstruct the derelict Tarbrax oil works on the south side of Cobbinshaw moss: a site that had enjoyed a similarly complex and troubled history. The new company housed much of its new workforce at South Cobbinshaw, and breathed new life into the village. A new school was built in about 1894 and the United Presbyterian church was reconstructed in about 1900. A reading room was also provided. Such progress was abruptly arrested however when the Caledonian Mineral Oil Co. was forced in liquidation; although creditors kept the business running for several years. When a new Tarbrax Oil Company was formed in 1904, they chose to develop new works and new housing at the village of Tarbrax, and took no interest in South Cobbinshaw village.

No photographs or detailed plans survive of housing at South Cobbinshaw, but it seems that the layout shown on the 1895 ordnance survey map was established before 1880, when it was recorded that the village contained 59 houses. The map shows a mix of housing types; two long rows running down the slope of the hill, each divided into twelve single-room homes, and four other blocks of housing at right angles to the long rows, including one seemingly divided into particularly mean-sized back-to-back homes. One row had structures - perhaps stairways - marked at the rear, suggesting this might have been a two storey block. The housing seems likely to have been built at different periods, and perhaps reflected different status of workers, however no records survive of this history. 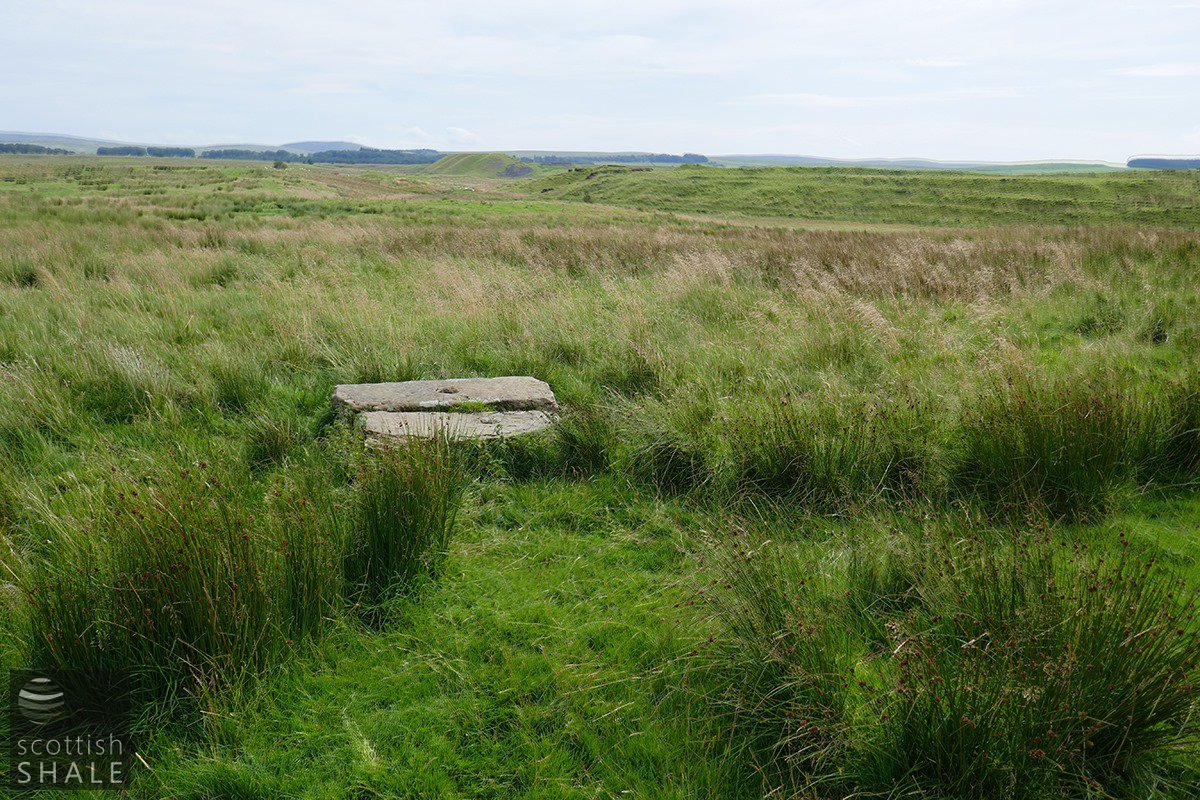 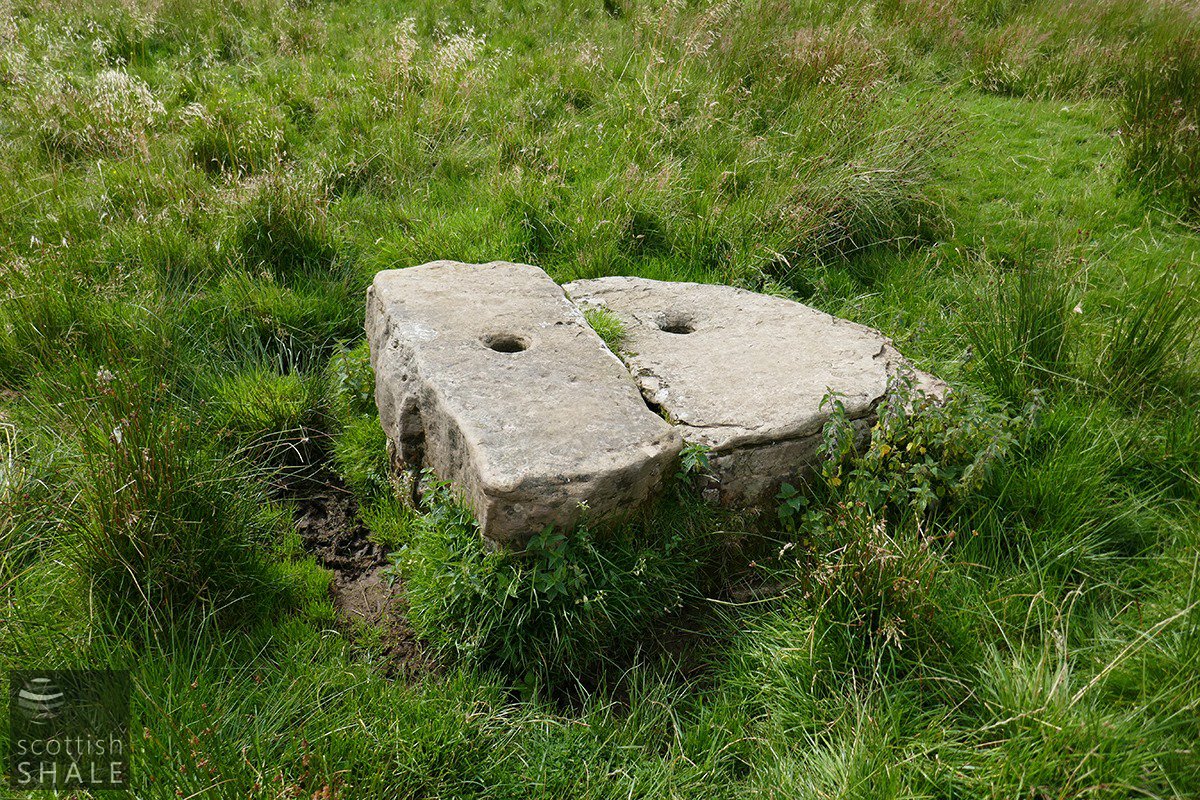 Close-up of well cap, which is marked on the 1909 OS map. It's the only surviving piece of masonry from South Cobbinshaw village. 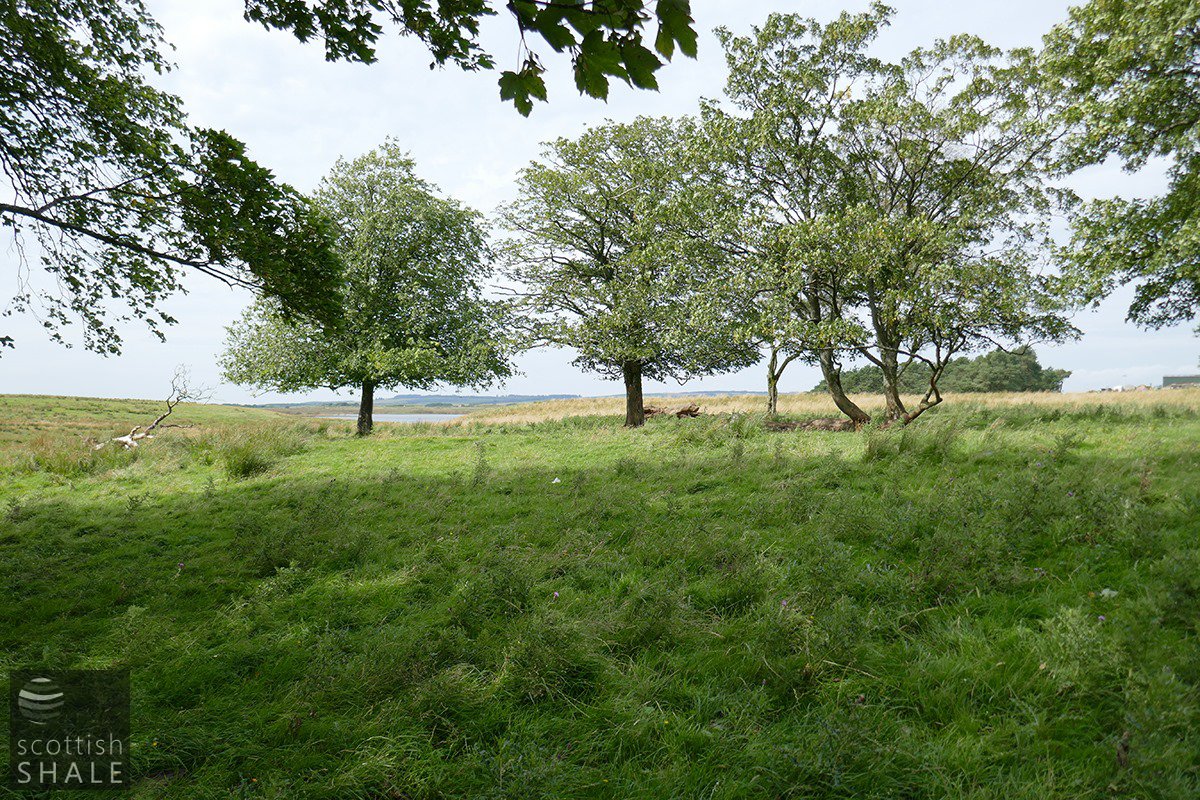 A rectangle of trees mark the site of the manager's house at South Cobbinshaw. 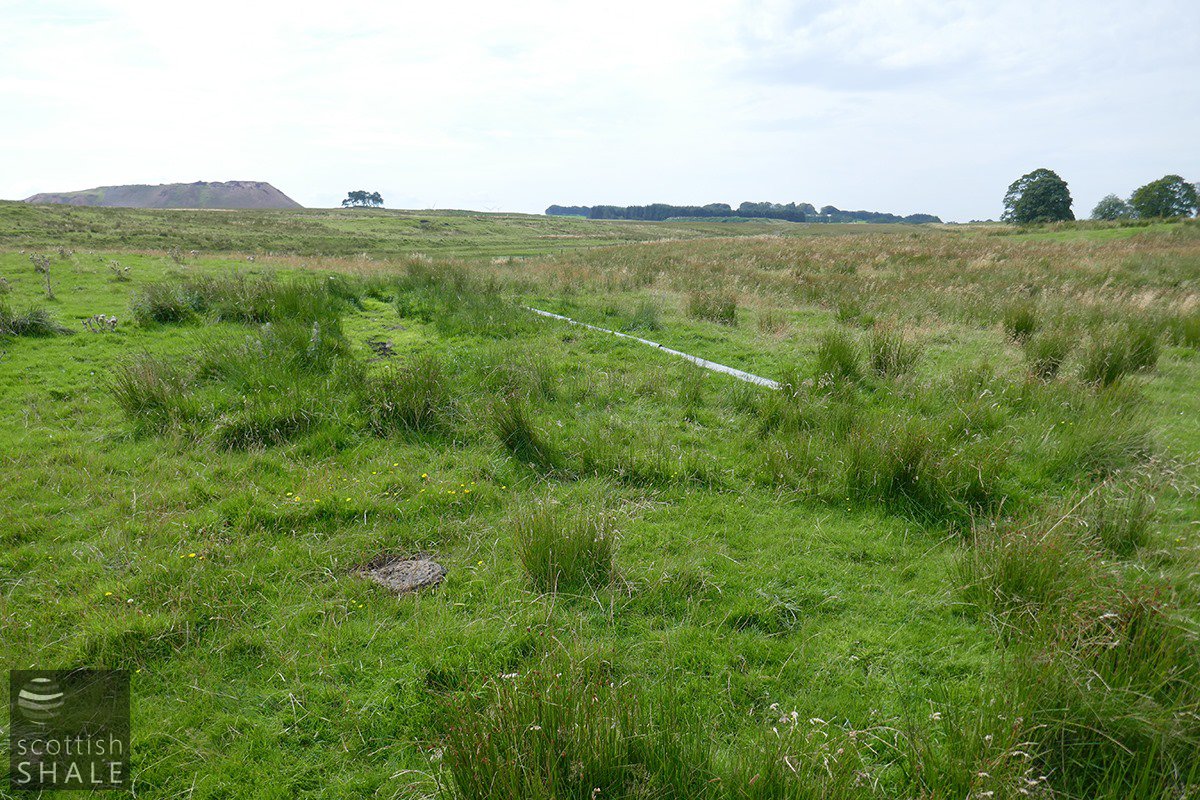 A rectangular outline still discernible among the reeds marks the site of the original school building.
Tarbrax bing is in the background. 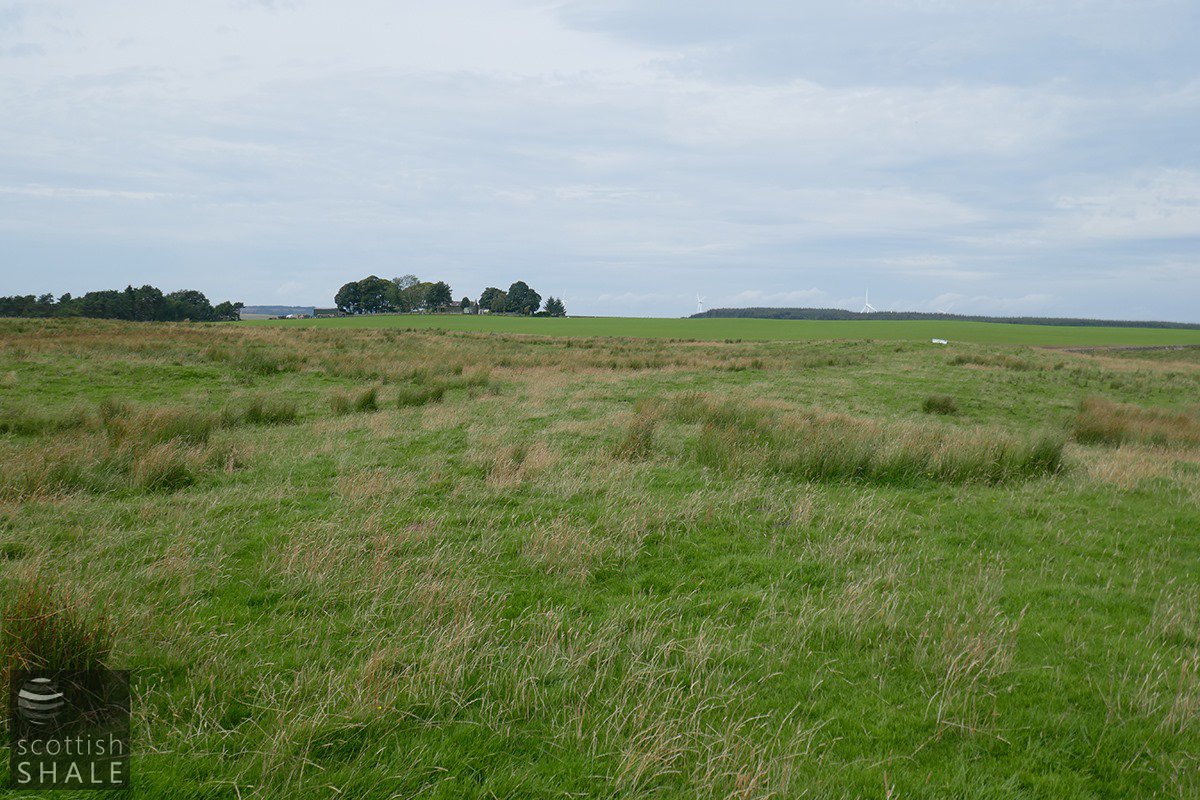 In 1903, the creditors of the Caledonian Mineral Oil Company, anxious to raise the most from their assets, sold off the two blocks containing the twelve best houses in the village, while all other housing was stripped of slates, tiles, doors and other salvageable components. The complete houses seem to have been purchased, and then rented out by, Dr. Hugh Young, the local minister. The church and the school continued for a time to operate in wondrous isolation; the residents of the revitalised village of Tarbax trekking more than a mile across the moor to reach them.

The components of the school building, constructed of corrugated iron on a timber frame, were offered for sale in 1922. Dr. Hugh Young died in about 1930, aged over 90. By then, the remaining houses in South Cobbinshaw had gone, and – following closure of the oil works in 1926 - Tarbrax was also a ghost village, with only 50 of the 300 houses still occupied. The Edinburgh Presbytery accepted the closure of the church in 1930 and agreed that a local farmer could take down the timber and corrugated iron structure for use on his farm.

Both the school and the church buildings were re-erected in a modified form at Woolfords Farm, and rather wonderfully, the structure built from the church components still survives, carefully conserved as a store and recreation room. Inside, the open hall of the building displays its original timber roof trusses and timber lining, and feel as if it still awaits its congregation. You might even imagine the noise of the barefooted bairns of South Cobbinshaw playing in the school playground next door.

View of the village from the 1907 OS 25" map, showing all but two of the rows as derelict. Image courtesy National Library of Scotland. 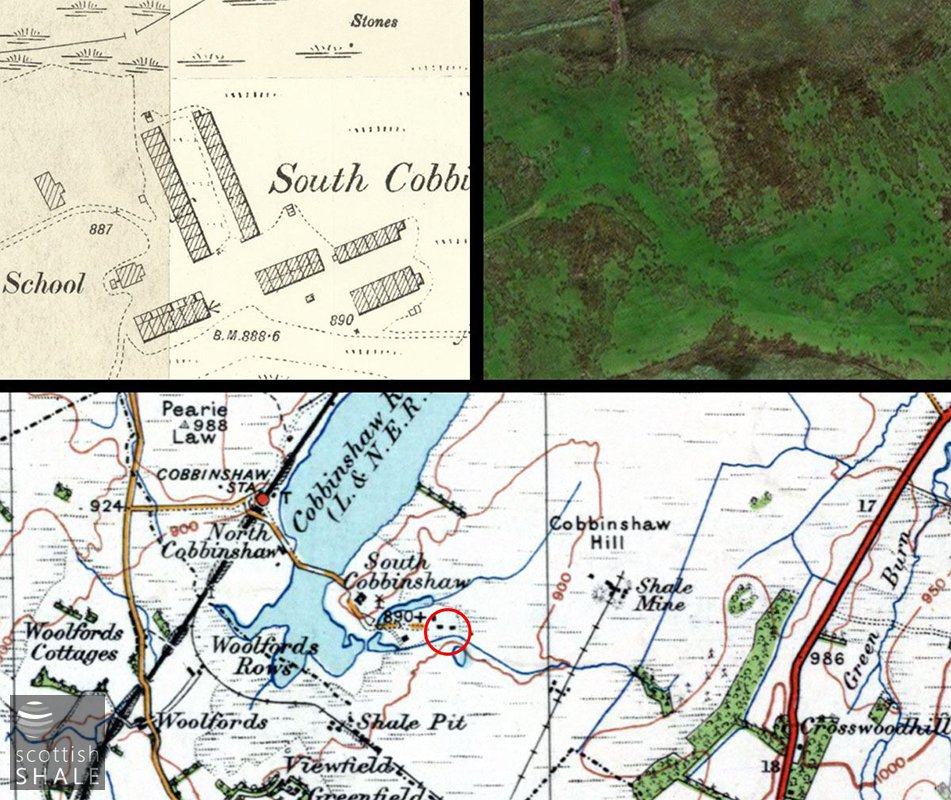 The remote location of South Cobbinshaw, from a 1" OS map from the 1920's, also layout shown on the 1895 25" OS map, with some features still suggested in recent aerial photos. Map images courtesy National Library of Scotland. 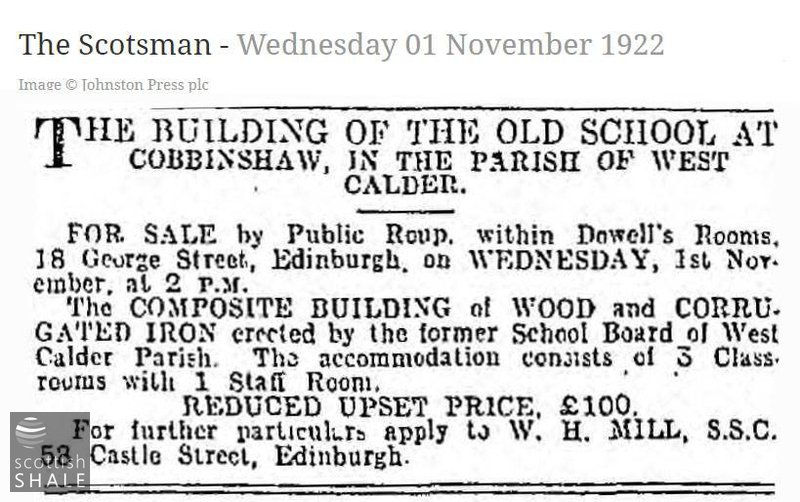