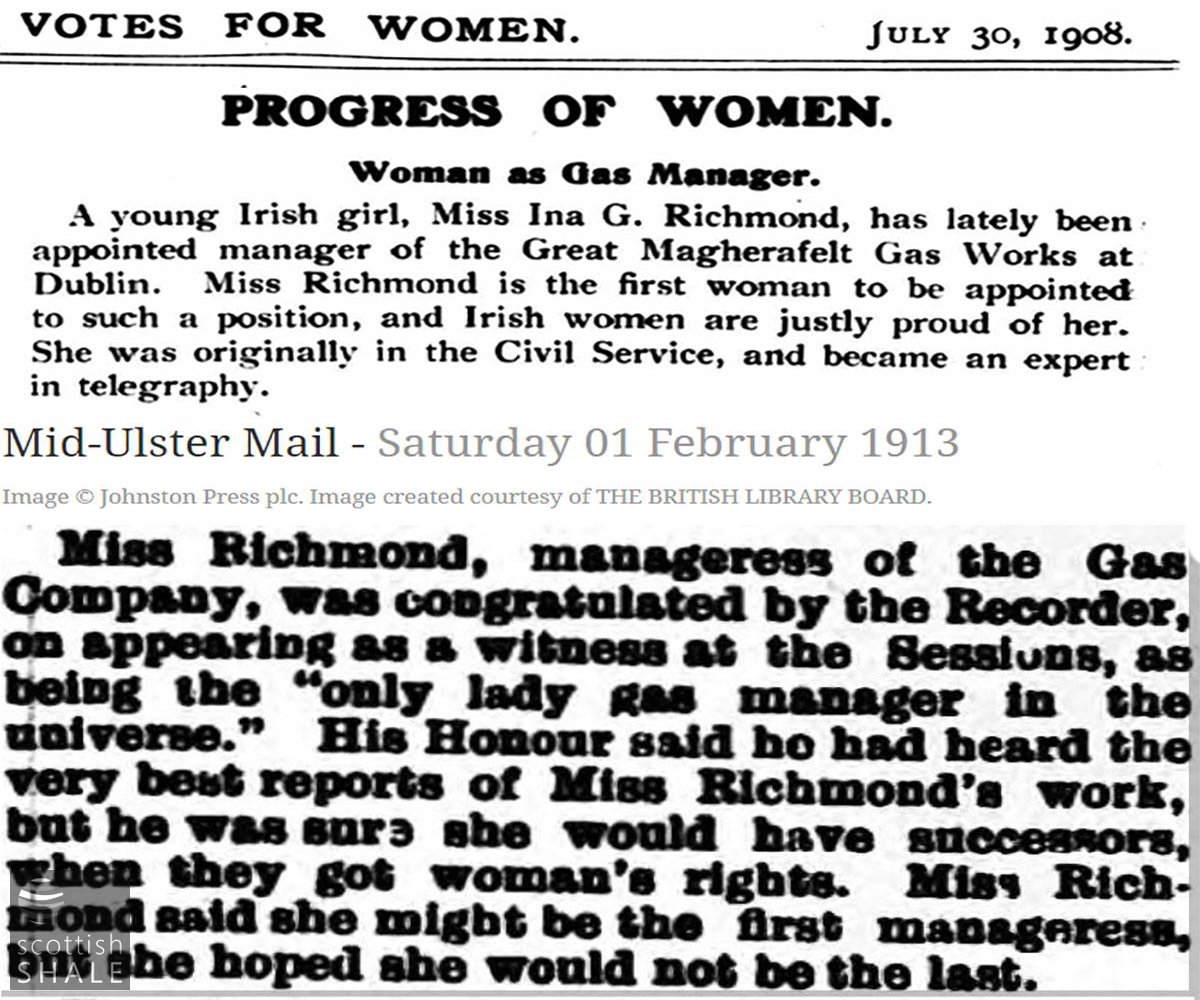 Sadly, Votes for Women got many of their facts wrong. (Top).

She hoped she would not be the last! (Bottom). 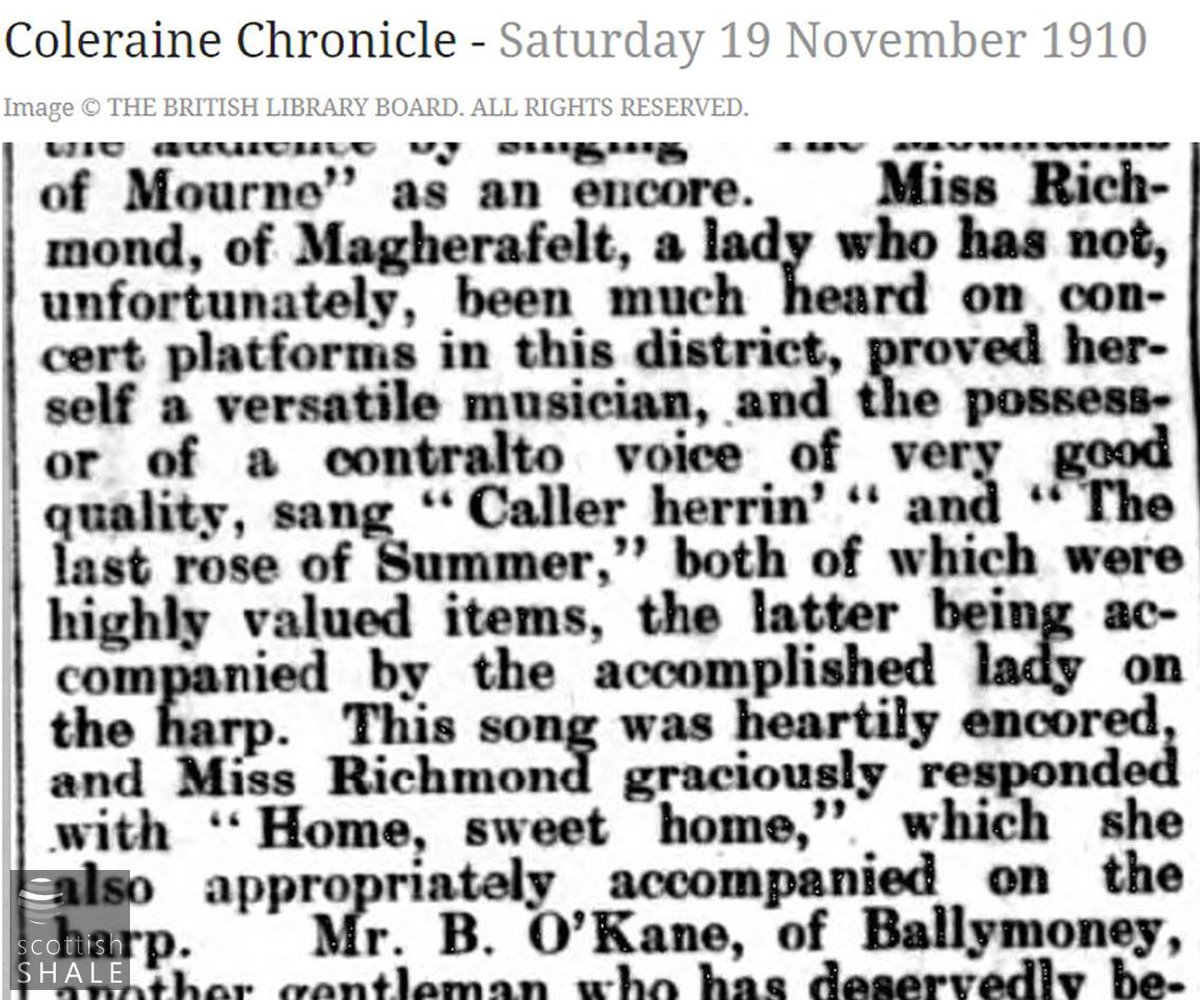 In 1851, the wonders of gas lighting came to the streets and homes of Whitburn. A small gasworks, occupying a site little larger than a cottage, was built behind the houses of West Main Street, a small distance to the north and west of Whitburn cross. Here gas was manufactured by heating coal in cast-iron retorts, also producing coke, tars, ammonia and many other fragrant by-products. The gas manager and his small team had to be jacks-of-all-trades. Retorts needed to be fired and continually attended to throughout the street lighting season, and the same men were responsible for laying mains, attending to valves and meters, and lighting street lamps at dusk. Because of this round-the-clock responsibility, gas managers and their families often lived on-site in a provided house. 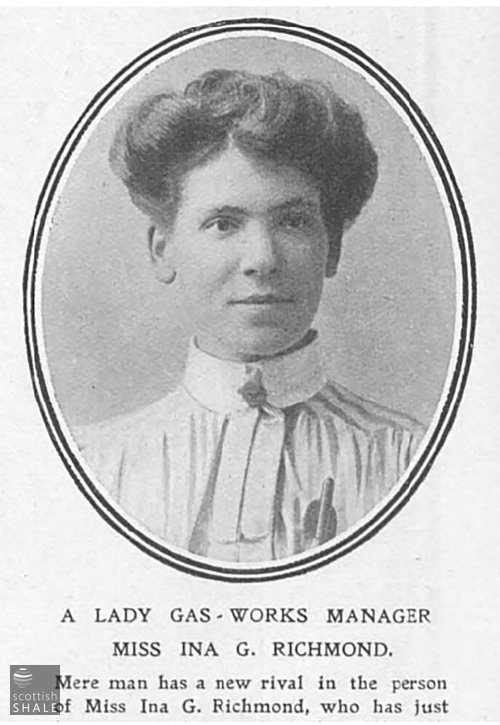 John Revie Richmond was 24 years old in 1860, when appointed as manager of Whitburn gas works. A native of New Monkland parish, he had previously been employed at Airdrie gas works, and prior to that was recorded as an agricultural labourer. He had married his wife Elizabeth the previous year and had one child. During the couple's early years in the gas manager’s house, at least three further children were born, all of whom died in infancy. James Galbraith Richmond, born in 1869 was the first child to survive to adulthood, becoming a school teacher in Muirkirk. David Richmond, born in 1870 became a baker, John Richmond, born 1871, assisted his father in the gasworks, while Adam Haldane Richmond, born 1874 served his time as an iron turner and later became manager of the gas works at Dundonald in Ayrshire.

The baby of the family, and only surviving girl, was Christina Galbraith Richmond, usually referred to as Ina G., who was born in 1877, and at the age of 14 was employed as a dressmaker’s assistant. She had a fine voice and in her teenage years was called upon to perform at many social events in Whitburn.

After serving as Whitburn’s gas manager for 27 years, John Revie Richmond died, at the age of 52, in 1888. His son John, not yet seventeen, succeeded him as gas manager and head of the family. Despite his youth, John fulfilled his job well, but was soon seeking new challenges. In 1895 he was appointed as manager of the much larger gasworks at Dunbar and moved into the manager’s residence there, along with his mother, and perhaps other siblings. Three years later he advanced further, accepting managership of the substantial Kilkenny gas works, in the south of Ireland, despite the gas commissioners of Dunbar offering to raise his annual salary by £20. His mother continued to live in the gas works house in Dunbar, where she died two years later.

Ina, in the meantime, had been progressing with a career in the post office and by 1895 was chief postal and telegraph clerk at St George’s Cross post office in Glasgow, no mean achievement for Whitburn girl with limited education. Doubtless the practical and administrative skills acquired when growing up in a gas works would have been of great benefit in this role.

For whatever reason, Ina gave up her post office career to join her brother John in Kilkenny as housekeeper of his gasworks manager’s residence, although it might be imagined that she was also supporting him in the management of the works. John’s eyes were soon on further advancement, and is recorded as having travelled to St Louis in 1904, presumably to visit the World’s Fair. In 1908 John accepted a post in the gas industry in Brazil, and in the same year Ina was appointed to manage the gasworks in the small town of Magherafelt in County Londonderry.

The appointment of a young woman to manage a gas works was unprecedented, and soon received widespread attention. The owners of the gas company were anxious to be recognised for their forward thinking and enterprise in this “great experiment”, and were doubtless behind press releases and portraits that were printed in the “lady’s corner” of newspapers throughout the world. One anecdote told how when confronted with an obstructed gas valve she removed a hairpin, straightened it, and cleared the blockage. The account went on to report “she has done other remarkably clever things”. As articles were reprinted they became increasingly exaggerated. Ina became “the first lady gas manager in the universe”, was described as a “young Irish girl”, and her village gasworks became “the great Magherafelt gasworks of Dublin”

Ina was undeterred by this attention and quickly earned respect as an effective and popular gas manager. Eighteen months after her appointment, her words were reported in an interview with the trade journal Gas World. “No one knows better than myself that the wives of managers of small gasworks have often charged a retort, and done much other routine work on behalf of their husbands, when the husbands have been outside service laying, main laying, meter fixing, etc. I have done it myself, and have seen it done many time; and I venture to suggest that the managers of small gasworks at the present day would not retain their positions long if it were not for the assistance given by their wives." 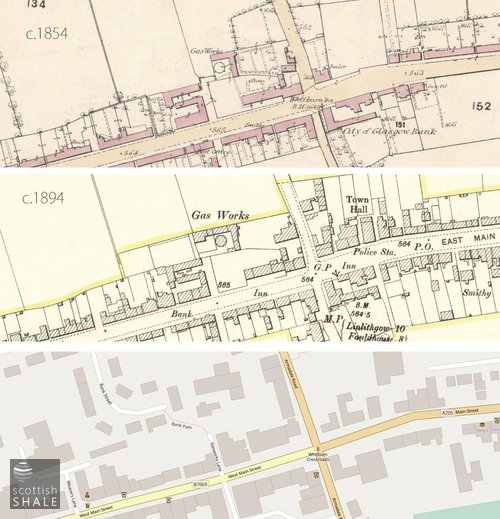 Much of the rest of her account relates to the duties of a gas manager and the technical world of four-way valves, exhausters and damage to gas mains by steam rollers. “On one occasion I remember working till 3 a.m. at the gas engine, and would not be beaten. I found compression bad, and concluded that the valves wanted grinding. I did this, and found matters no better. I next got the piston out, and put on a new ring or two. Neither did this mend matters. Finally, I found the defect was in the ignition tube. I got things right, however. These little experiences teach one to look into detail when anything goes wrong before jumping at conclusions. "

Miss Richmond was a popular figure in the local community, and her fine contralto voice and mastery of the harp made her a welcome part of any social occasion. She was instrumental in founding the Magherafelt Orchestral Society and was an accomplished horsewoman. Ina was particularly proud of her garden at the gas manager’s house, in which she kept bees and bred Dalmatian dogs.

In August 1914, six and a half years after her arrival, the local newspaper made a surprise announcement; ”It is with mixed feelings that we announce the early departure from our midst of Mrs. M’Grath, formerly Miss Richmond”…the article going on to describe her achievements and concluding “we wish her every happiness in her new sphere”. Ina Richmond then disappears mysteriously from the historical record. The activities of “Miss Richmond” had regularly been reported in local papers that year, but no reference was ever made of a marriage. All research into the further exploits of Ina Richmond or Ina M’Grath has drawn a blank.

John Richmond had returned from Brazil in about 1913 and was appointed manager of Penicuik gas works. He was a prominent figure in the gas industry until his retiral in 1938 and died at his home in Penicuik in 1947. There are references to a John Richmond being the owner of Magherafelt gas works and occupier of the manager’s house during the second world war, but nothing more is known.

It seems strange that a woman with the talents and presence of Ina Richmond would simply disappear into domestic obscurity leaving no further imprint on the world. Might it be that she followed in her brother’s footsteps and obtained a position is Brazil or equally exotic location? There must be a story still to be told.

Good things are happening in Whitburn at present, with shops of the Main Streets being spruced-up, monuments erected to mining heritage, and plans for the re-development of the Cross area, including the former gas works site. It would be wonderful if these fine plans were to include some memorial to the remarkable Richmond family – perhaps on the walls of Gas Works Lane?

Above right: Map images courtesy of National Libraries of Scotland.

Above left: The remarkable Ina. 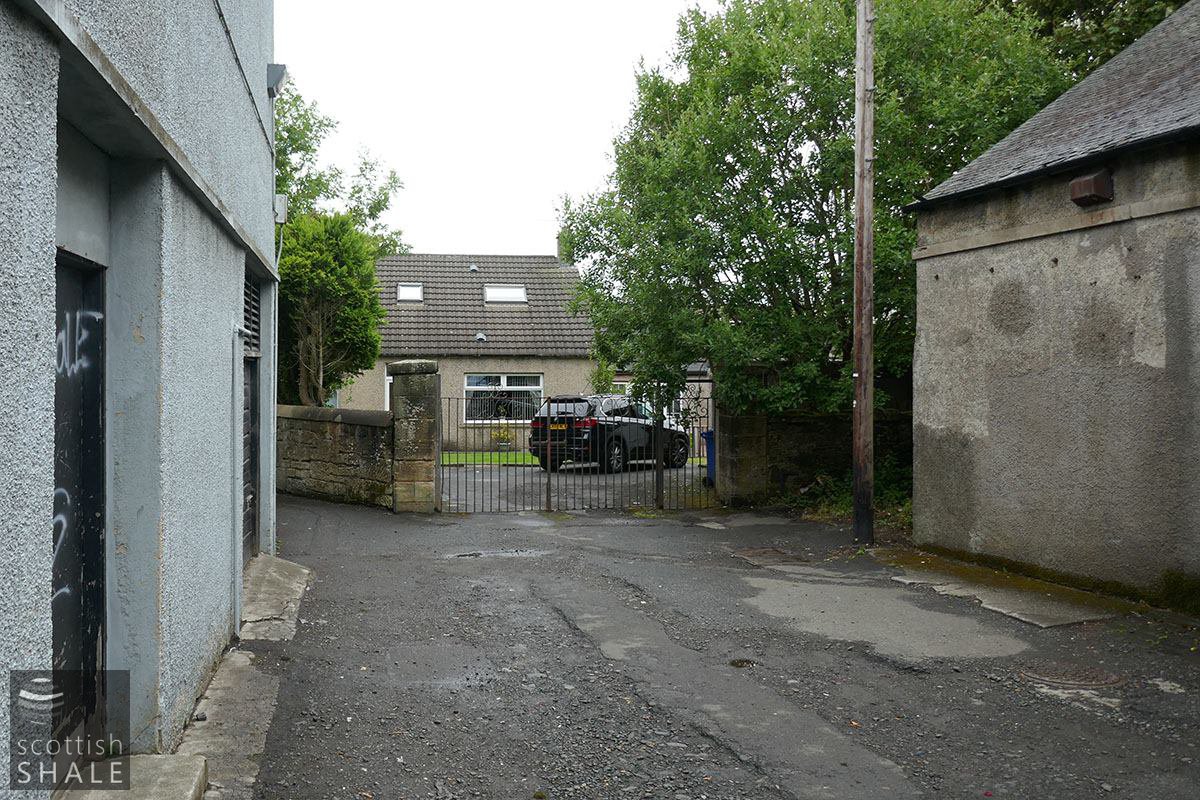 Gas Works Lane and the former entrance to the gas works and managers house, Ina's birthplace. 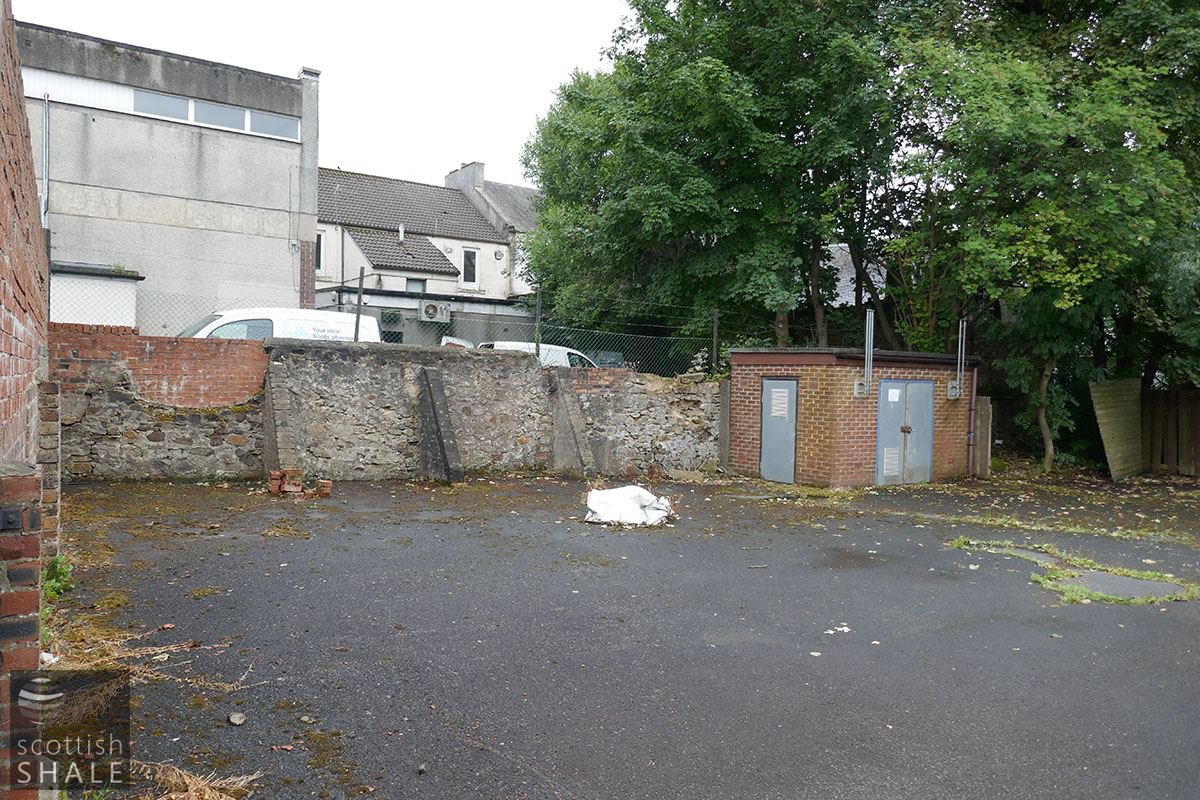 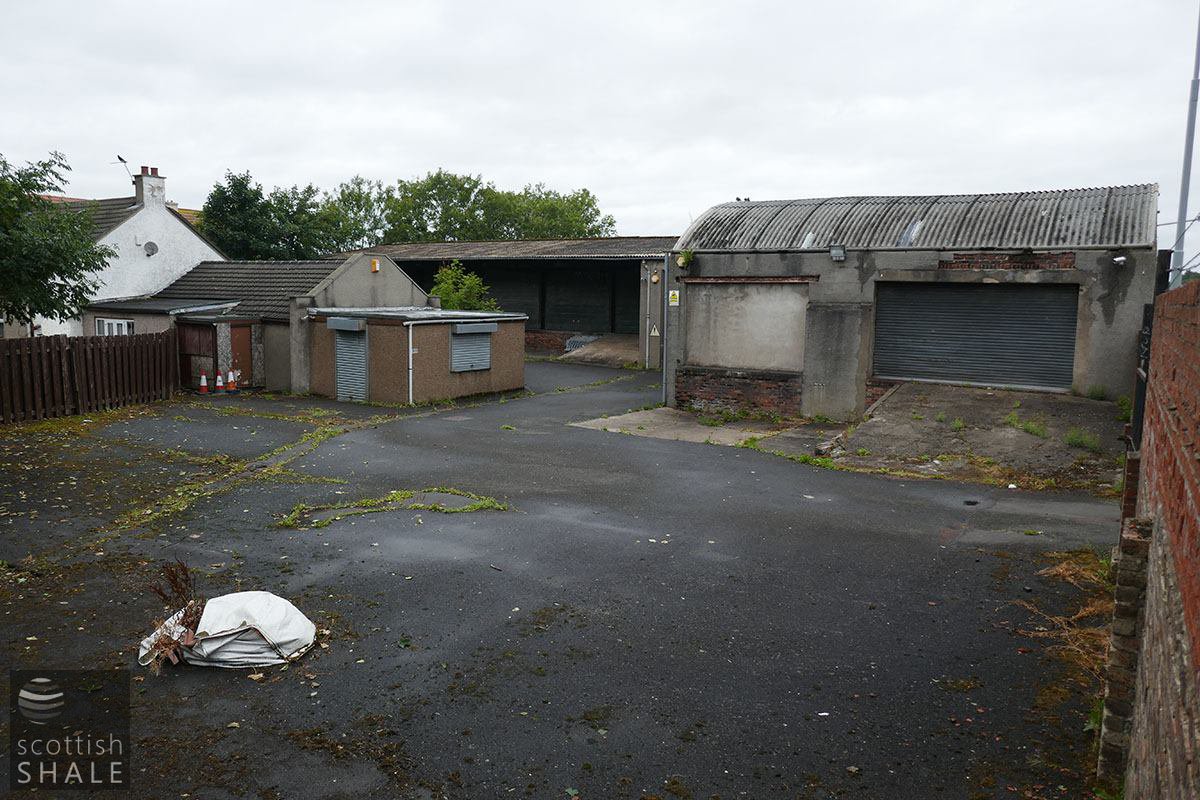 View across the gas works yard and site of the gas manager's house.