Shelter Beneath the Bing

An air raid shelter near Greendykes Road in Broxburn.

The area c.1958, before the quarrying of the bing. The marker shows the approximate location of the tunnels.

The area immediately north of the Union canal, and to the west of Greendykes Road in Broxburn, now forms a fantastic landscape of red shale cliffs and bluffs that might resemble the surface of Mars if it were not for the greenery and wetlands that are gradually colonising this alien scene. The spent shale seems to have been the waste product of shale oil operations during the 1860's and 70's either from Steele's oil works that lay close to Greendykes road, or the larger Albyn oil works sited to the west. As retorting processes were not particularly efficient in those early days, significant carbon remained in the waste that tended to heat and slowly combust deep inside the bing, fusing the fragments of waste shale into hard concrete-like masses. Most of the loose red blaes of the bing has been removed as construction material, most likely during the 1960's, leaving only the recalcitrant fused blocks of spent shale in place. 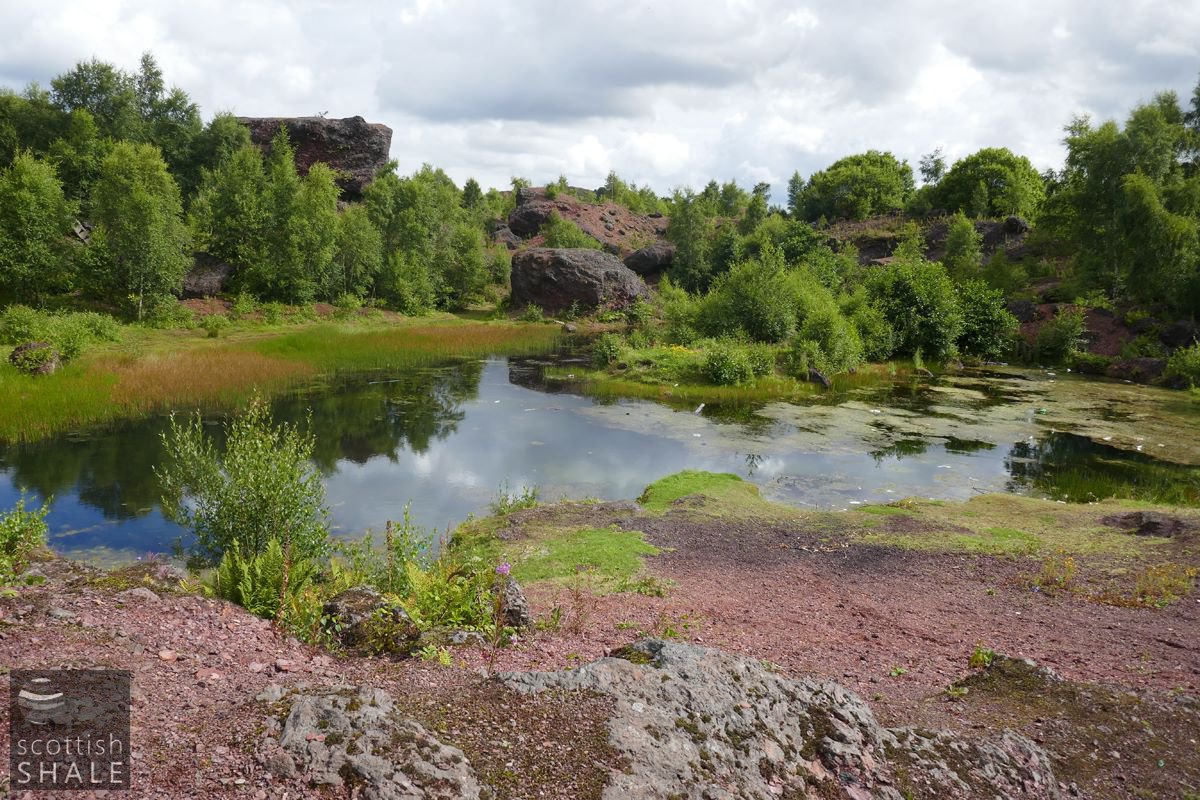 The pleasant pool at the heart of bing. 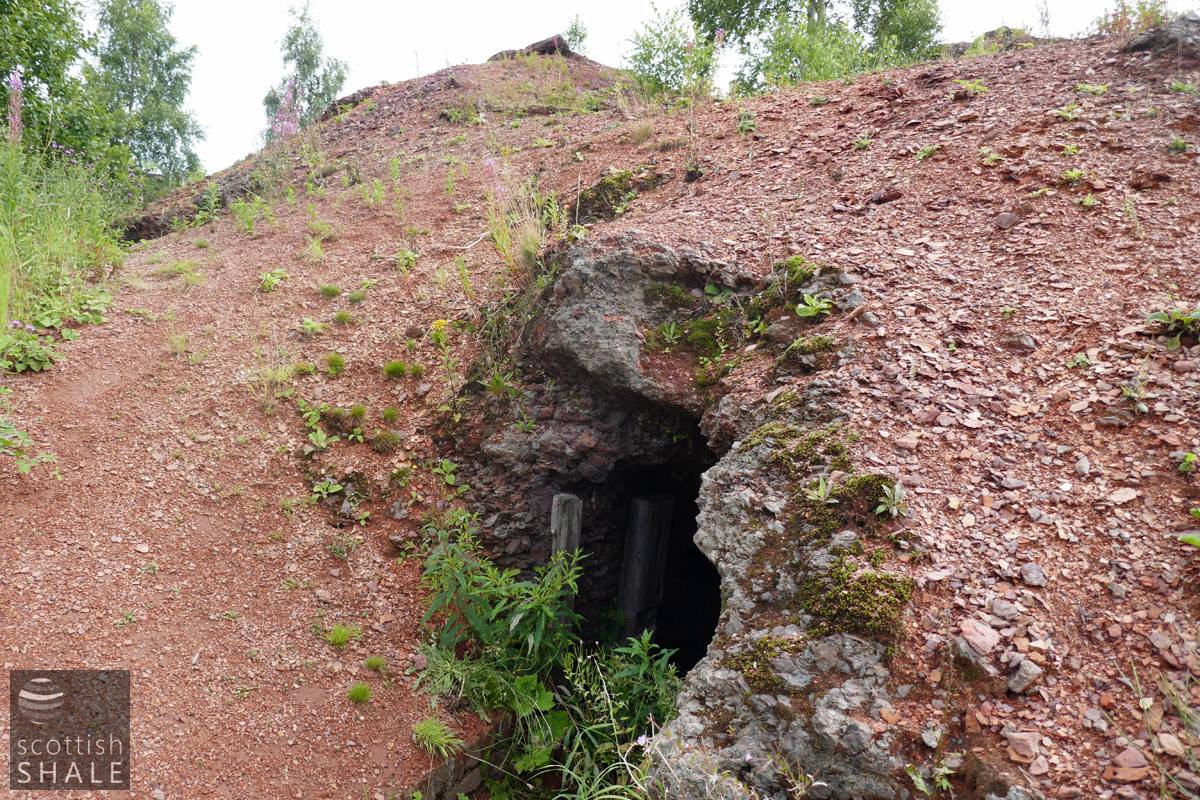 Entrance to the Northern "tunnel". 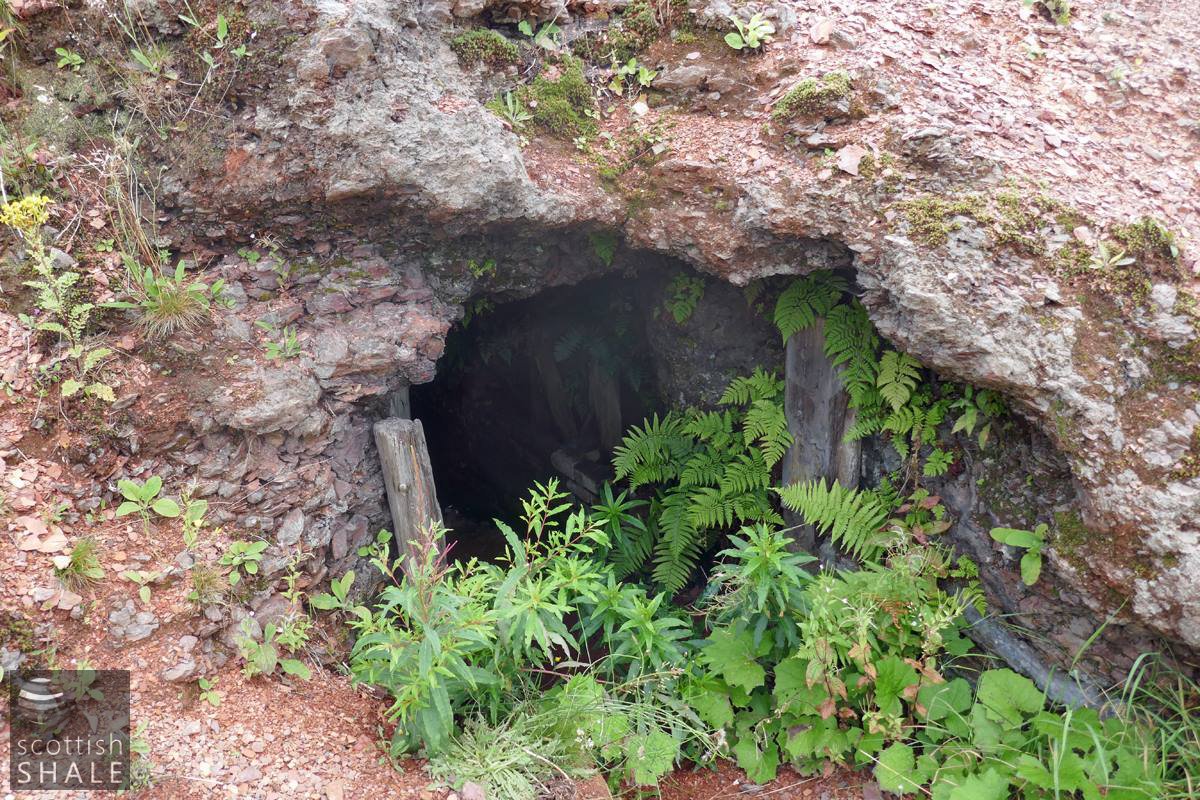 On the eastern edge of the bing, overlooking Greendykes Road, two mysterious tunnels burrow beneath the hard fused mass of spent shale. While some have suggested that these might be mine entrances, they seem far too narrow and insubstantial for this purpose, and the form of construction, with well-preserved railway sleepers framing a doorway at the entrance and fireclay bricks lining the wall, appears relatively recent. It seems most likely that the tunnels are the two entrances to an underground chamber constructed as an air raid shelter. A side opening visible at the end of one of the tunnels suggests that the chamber may still be accessible, although the author was too timid and decrepit to test this theory.

While most of the Broxburn refinery, on the west side of Greendykes Road, had been closed and cleared well before World War Two, the acid plant, candle works, and gas works continued in production into the 1950's. Might the air raid shelter beneath the bing have offered refuge to the workers of these plants? 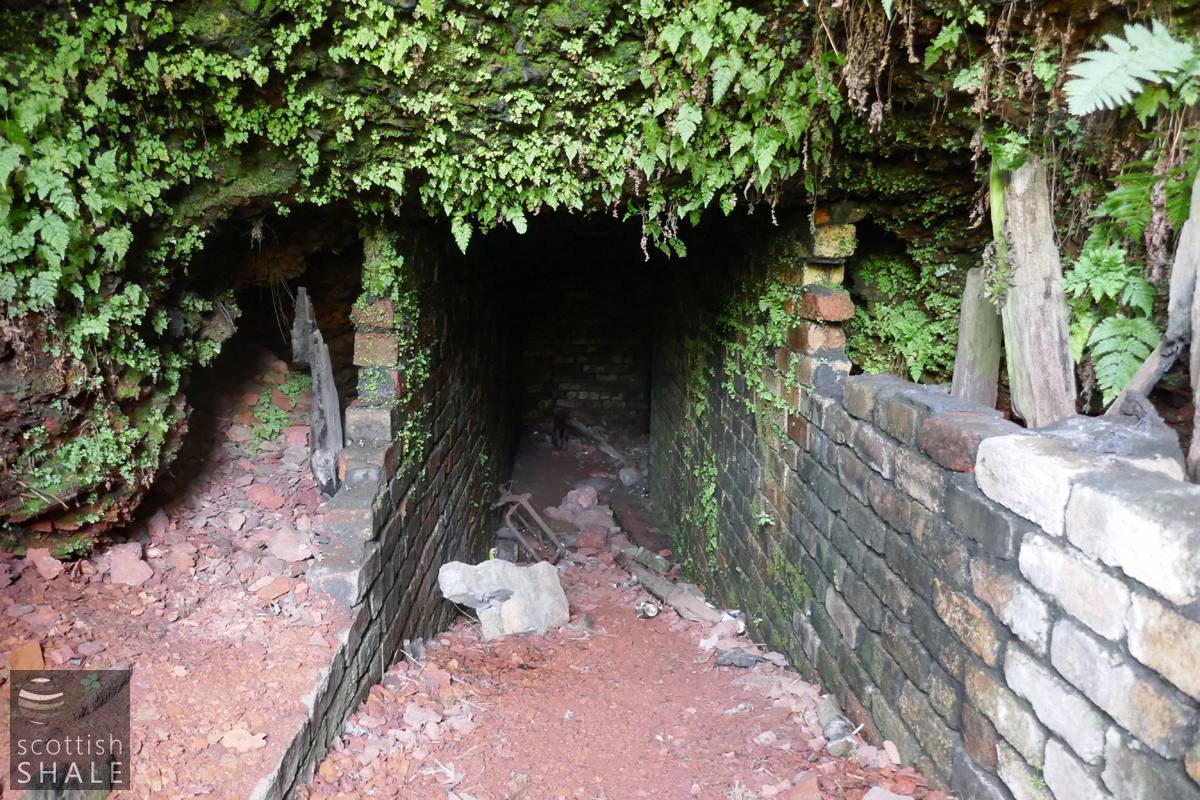 Close up of the northern entrance, now a ferny grotto.The right turn at the end of the passageway perhaps leads to the main chamber of the presumed air raid shelter. 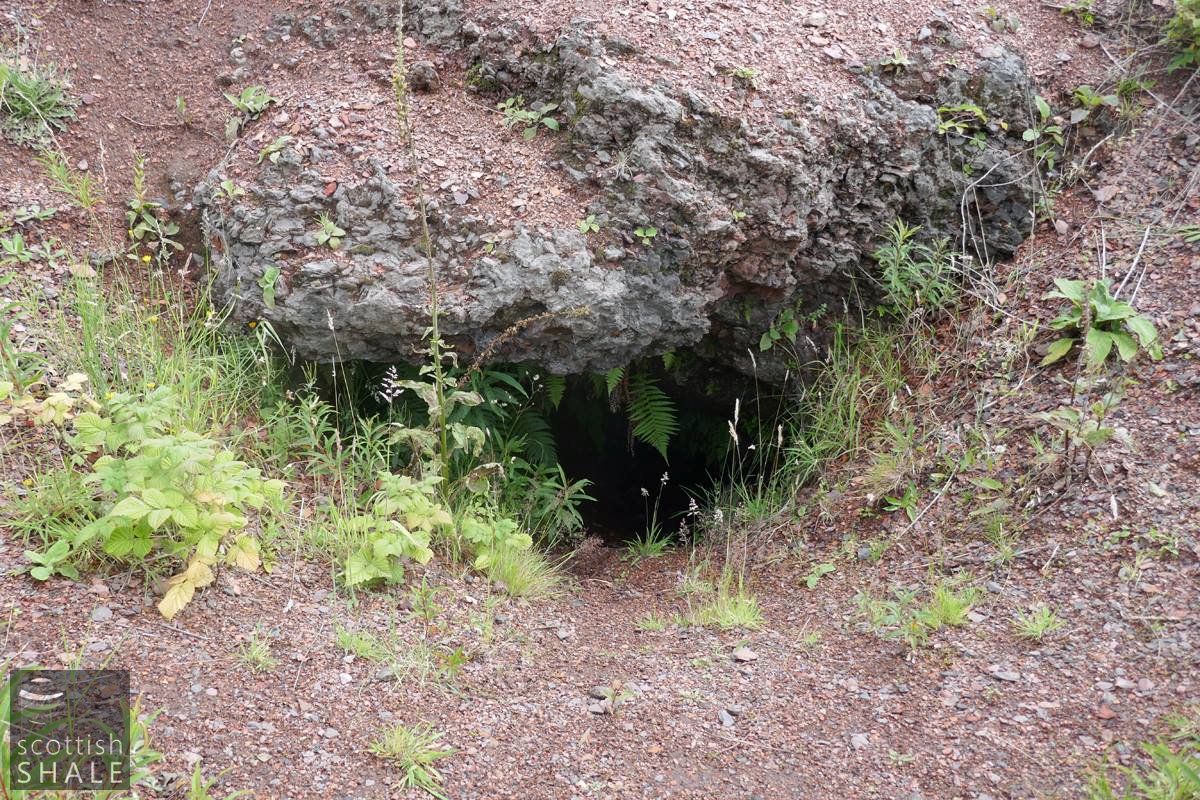 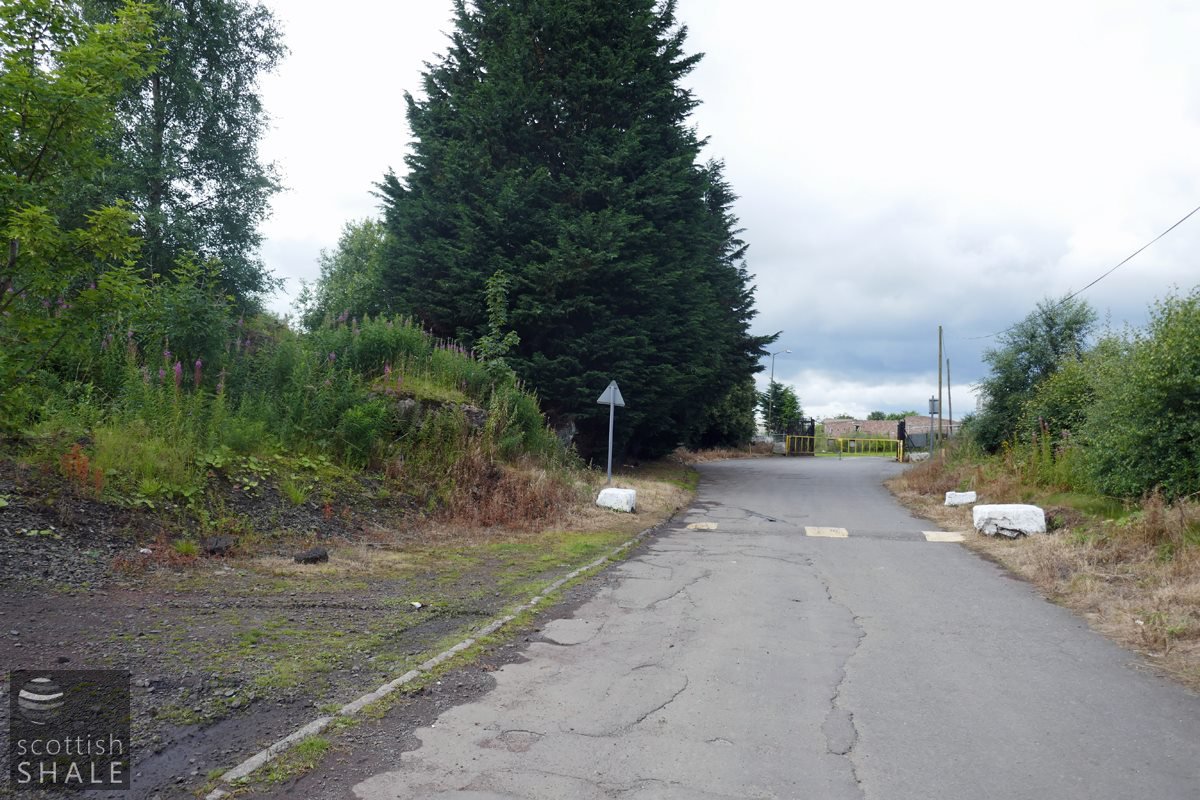 Route of the mineral railway approaching the level crossing of Greendykes Road. Turn immediately left at the triangular sign and follow the path to the tunnels.