Stopping the Traffic in Addiewell 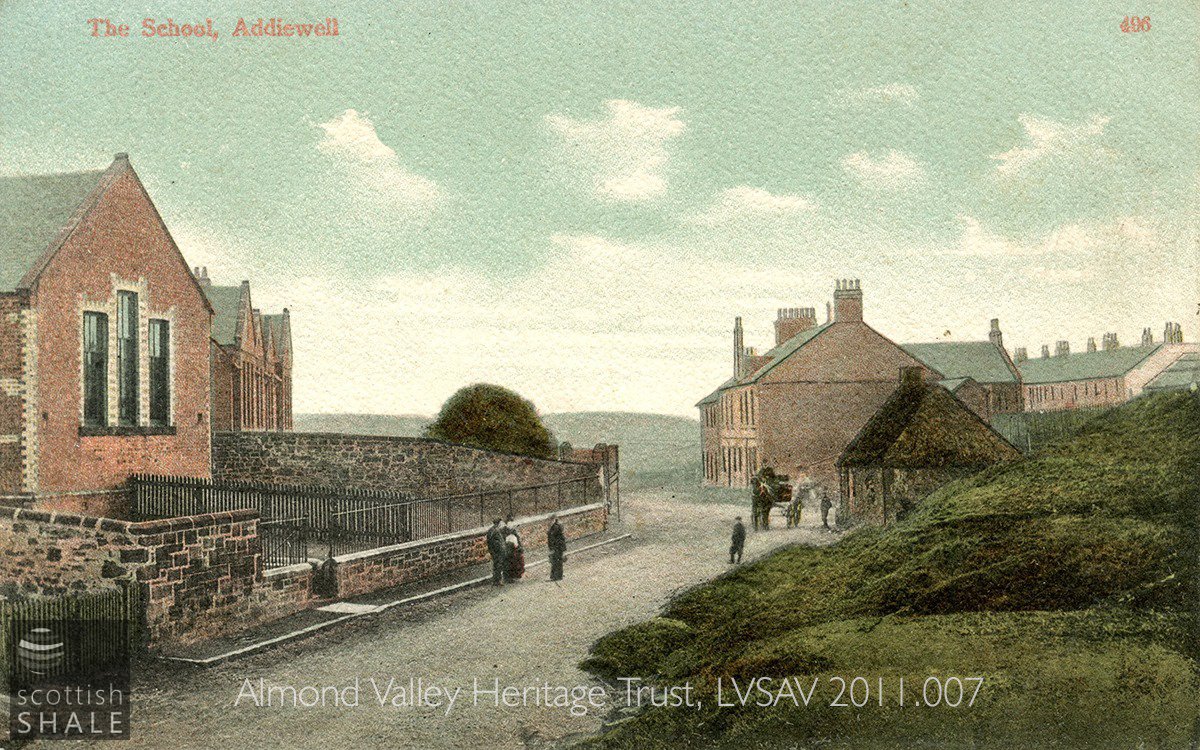 View of Addiewell school, looking east towards the Coop store and the houses of Cross Street. The little thatched toll house sits at the centre of this scene. 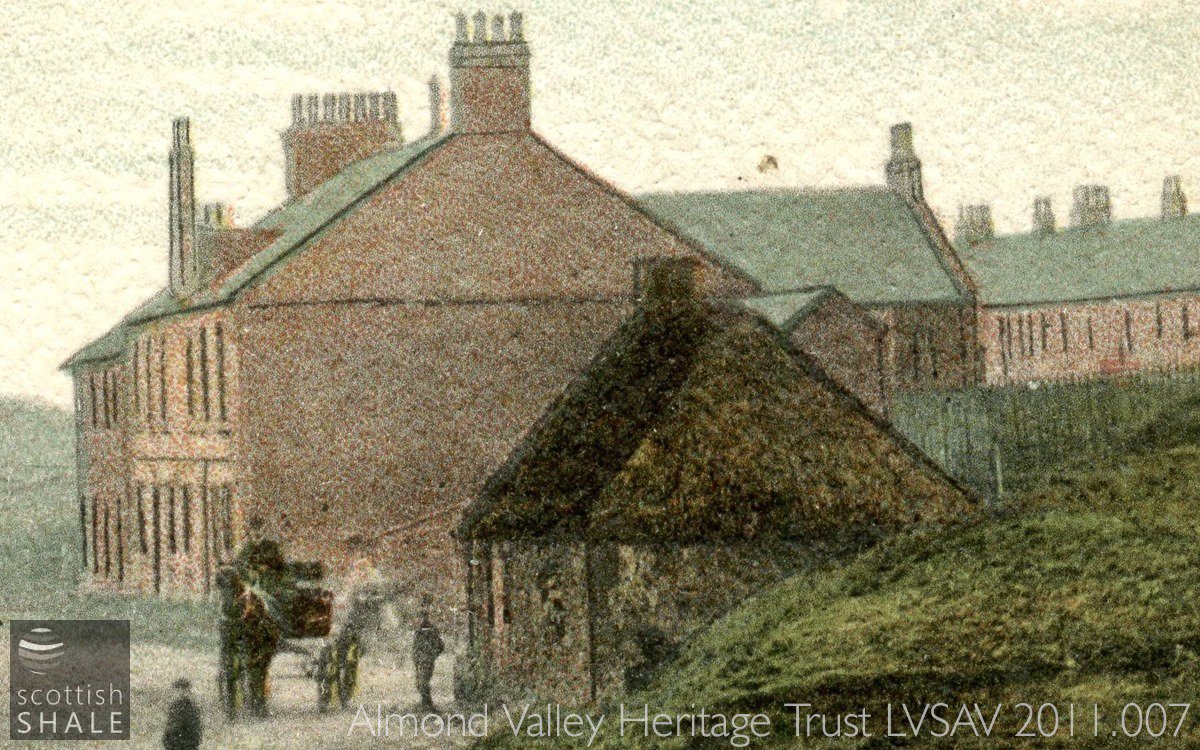 Unfortunately there's little more detail to be seen in this coloured and printed postcard. 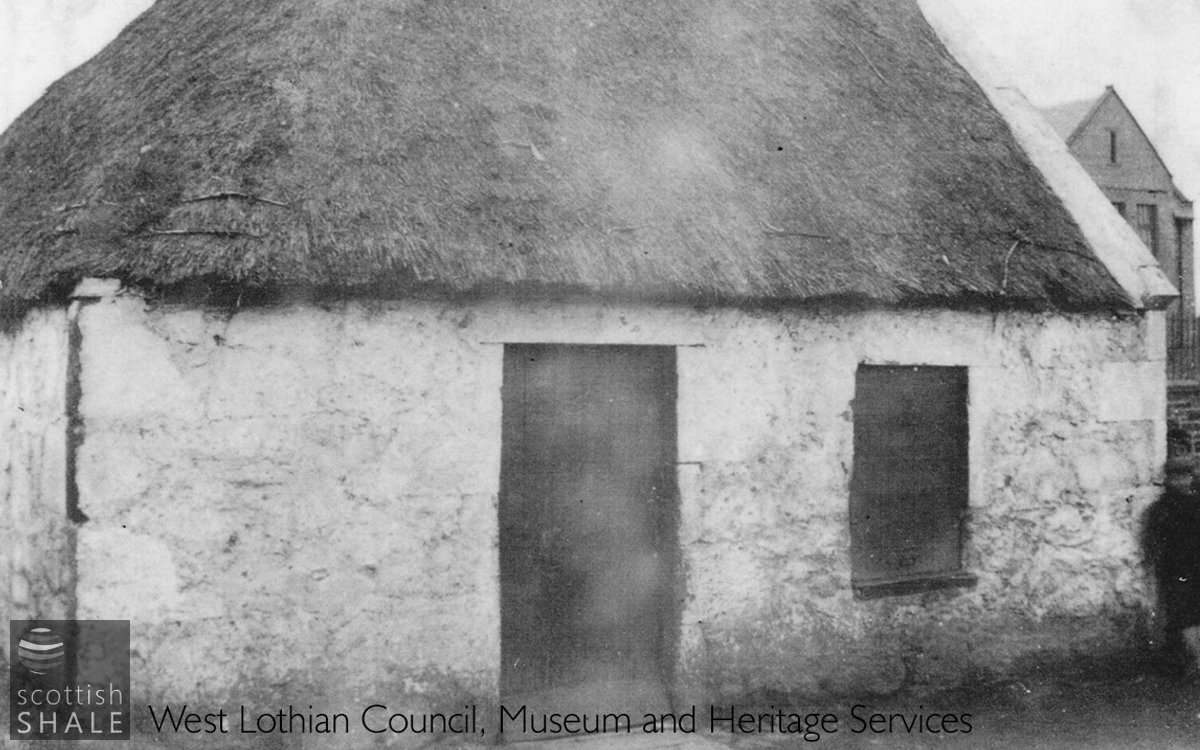 A closer view of the toll house, taken from the end of Livingstone St, with the school in the background.
Thanks to our pals in the Council museum service for use of this image.

At the centre of the shale oil village of Addiewell lay a relic from a pre-industrial age. The tiny whitewashed toll house, with rough stone walls and oddly-shaped thatched roof, once guarded the junction of two turnpike roads. Following the establishment of the great Addiewell oil works in around 1865, the old building was increasingly surrounded by the brick and slated rows that housed the workforce of Young's Paraffin Light and Mineral Oil Co., and by the schools, churches and shops that served this industrial community.

Addiewell was once no more than a cluster of farm buildings on a narrow road that ran from West Calder's Cleuch Brae to Breich Bridge toll, by way of Muirhousedyke, Loganlea and other farms. At the Breich Bridge toll, this small road joined the great Cleuch Turnpike road (now the A706); an early industrial artery that linked Wilsontown iron works with the port of Bo'ness, via Whitburn and Bathgate. The small road winding through the countryside of Addiewell and Loganlee will have carried a fair amount of traffic until the new Edinburgh to Lanark turnpike (now the A71) was built in the early years of 19th century, providing a much easier and more direct route between West Calder and Briech cross roads. 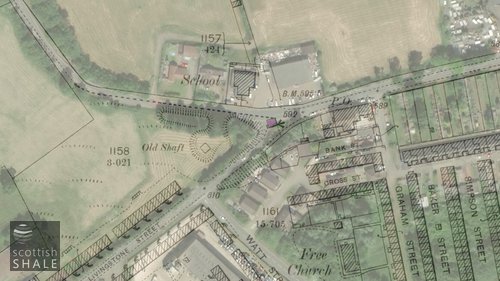 Traffic to West Calder from the north, by way of Bathgate and Blackburn, once followed an old drove road that forded the Briech water near Burnhouse. It was probably in the 1780's that a new direct road was built from Blackburn, bridging the Breich water and joining the existing road near Addiewell. The little thatched toll house was built where the two roads met, although the earliest reference we've found to the toll house is 1818, and it was not until 1836 that it first appeared in a list of roups; the annual bids invited to operate toll bars.

Addiewell toll seems to have escaped major dramas during its long history. In 1818, the tollkeeper, David Greenshields was robbed of a pocket watch, (“to whom it was a serious loss”) while assisting a stranger by fetching him water. In the 1850's the tiny cottage was home to Alexander Lind and his family, who through the years were recorded as living at several of the toll cottages owned by the Calder, Slateford, and Corstorphine Road Trustees.

James and Helen Bryce were in charge of Addiewell toll house in about 1880 when turnpike roads were abolished, and the toll bars that had long hindered traffic were finally removed. The Bryce family then moved to a new home in nearby Livingstone St., and James obtained work with Young's oil company. Rather fittingly, he was put in charge of the railway level crossing where the company's trains crossed the road a little to the east of the village. Once again, he was operating gates to stop the flow of traffic.

Early photographs, dating from the opening years of the 20th century, picture the toll house intact but seemingly disused, but the small structure is shown as a roofless ruin on the 1905 ordnance survey map.

Above right: The toll house (highlighted) as shown on the 1896 OS map, with modern view in the background. 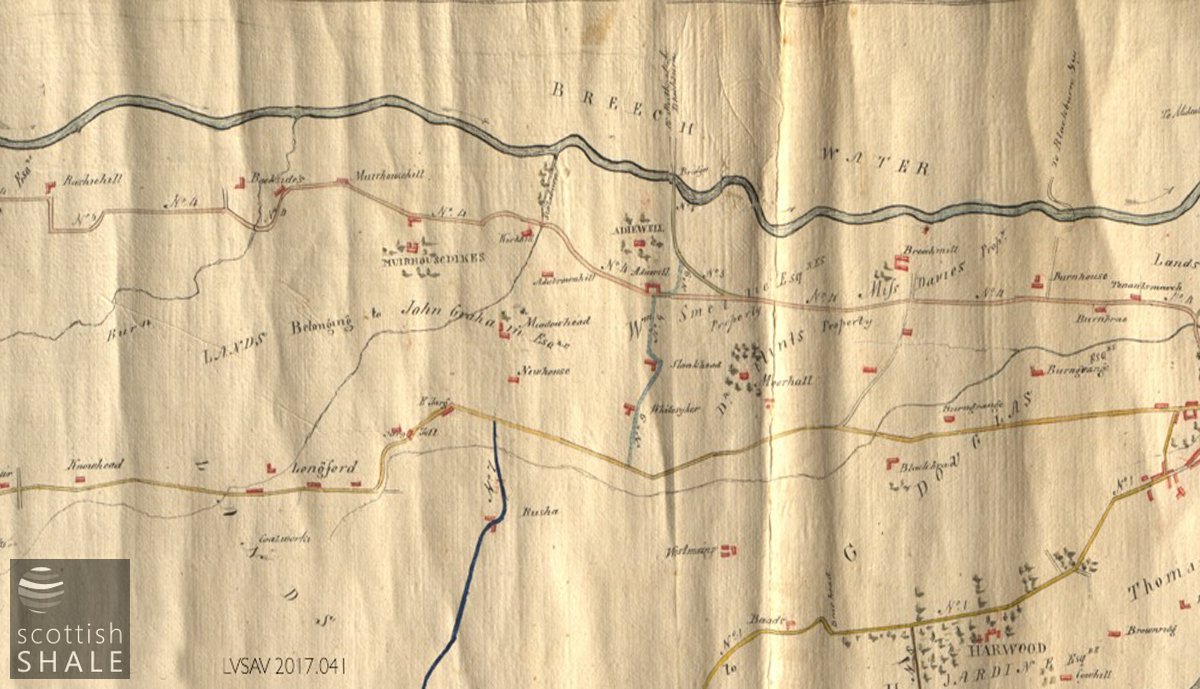 By 1808, when J. Yule drew this “eye draft of roads in the parish of West Calder”, the new road and bridge from Blackburn to Addiewell had been constructed, but not the new Lanark road (the present A70) from West Calder westward. 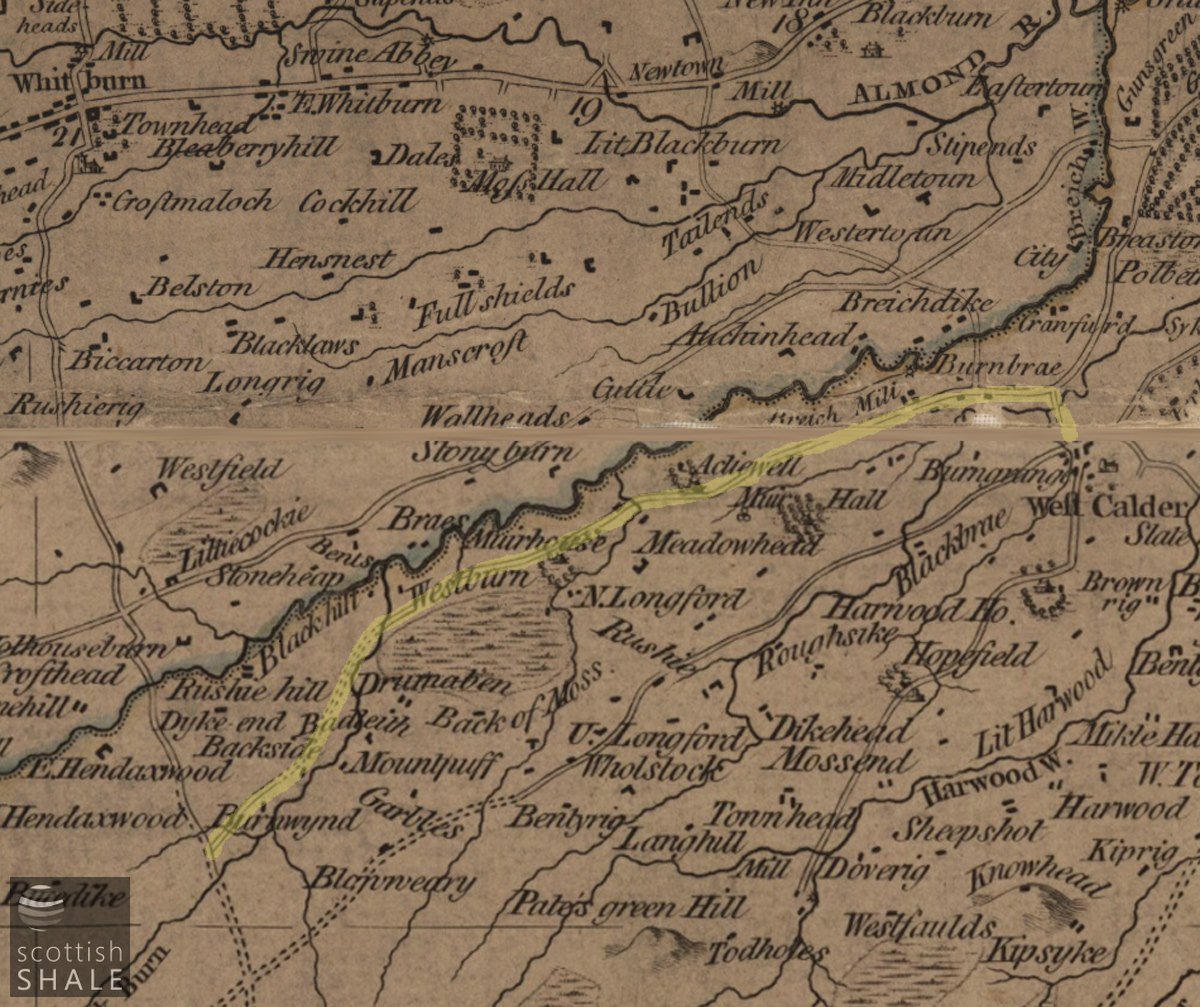 Armstrong's map of the three Lothians c.1773 shows a rather unfamiliar layout of roads. The road from West Calder to Breich via Addiewell is highlighted, but follows a slightly different route at its western end. The new road from Blackburn, (B792) bridging the Breich water near Addiewell has yet to be constructed, as has the new Lanark road (A71) passing through West Calder. 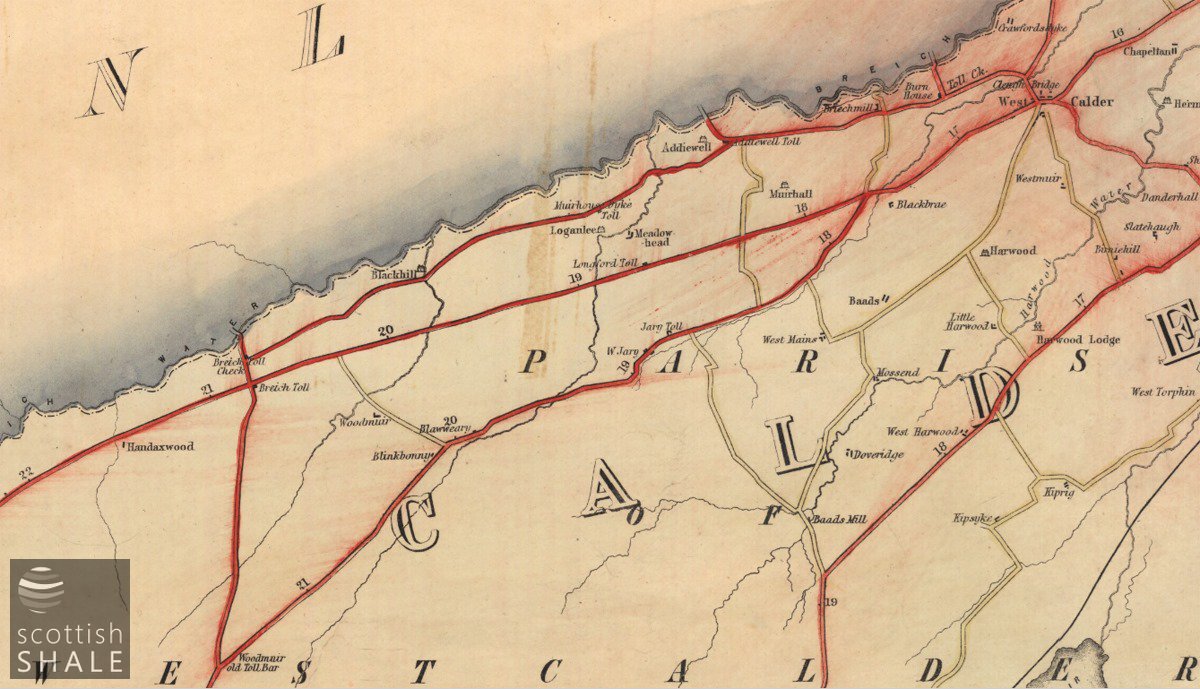 Further toll bars or check points on the east-west road via Addiewell existed at Burnhouse and Muirhousedyke, according to a map of turnpike and statute labour roads, printed in 1850. These must have been very insignificant structures as they don't appear on the ordnance survey map published soon afterwards. Courtesy of National Library of Scotland. 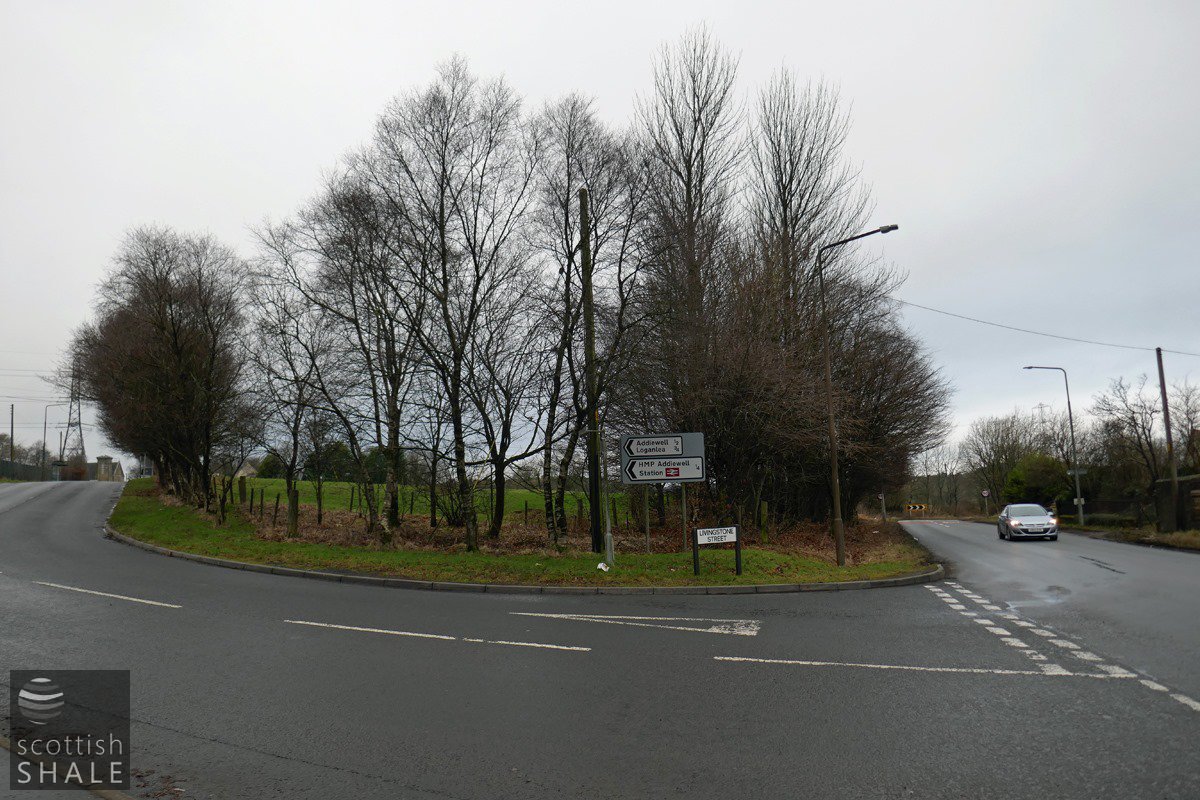 A grey day in Addiewell. The little toll house would have taken pride of place in the centre of this photograph. 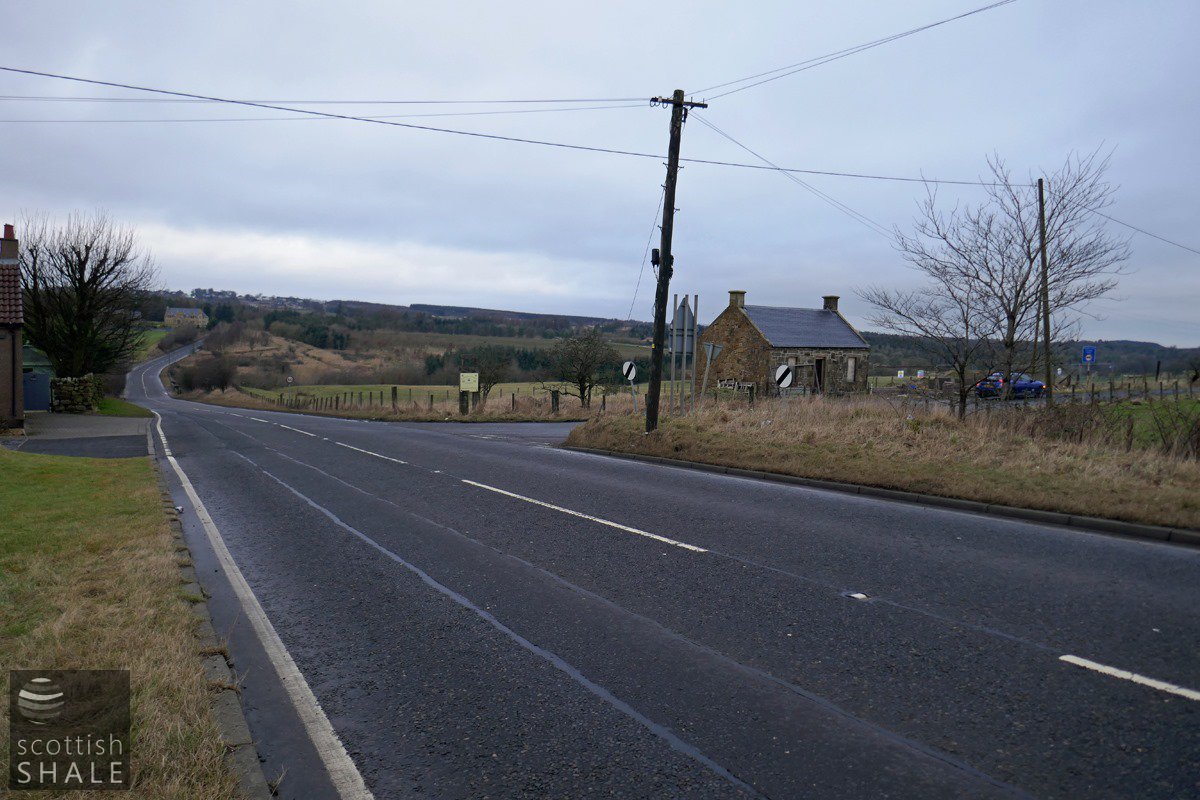 The Cleuch Turnpike Road, looking north towards Longridge. The Briech Bridge toll house would have occupied the rough verge to the right of the telegraph pole. The lonely little cottage - once derelict but now being repaired and extended, features on early maps. Might it have once controlled traffic heading towards Loganlea and Addiewell? 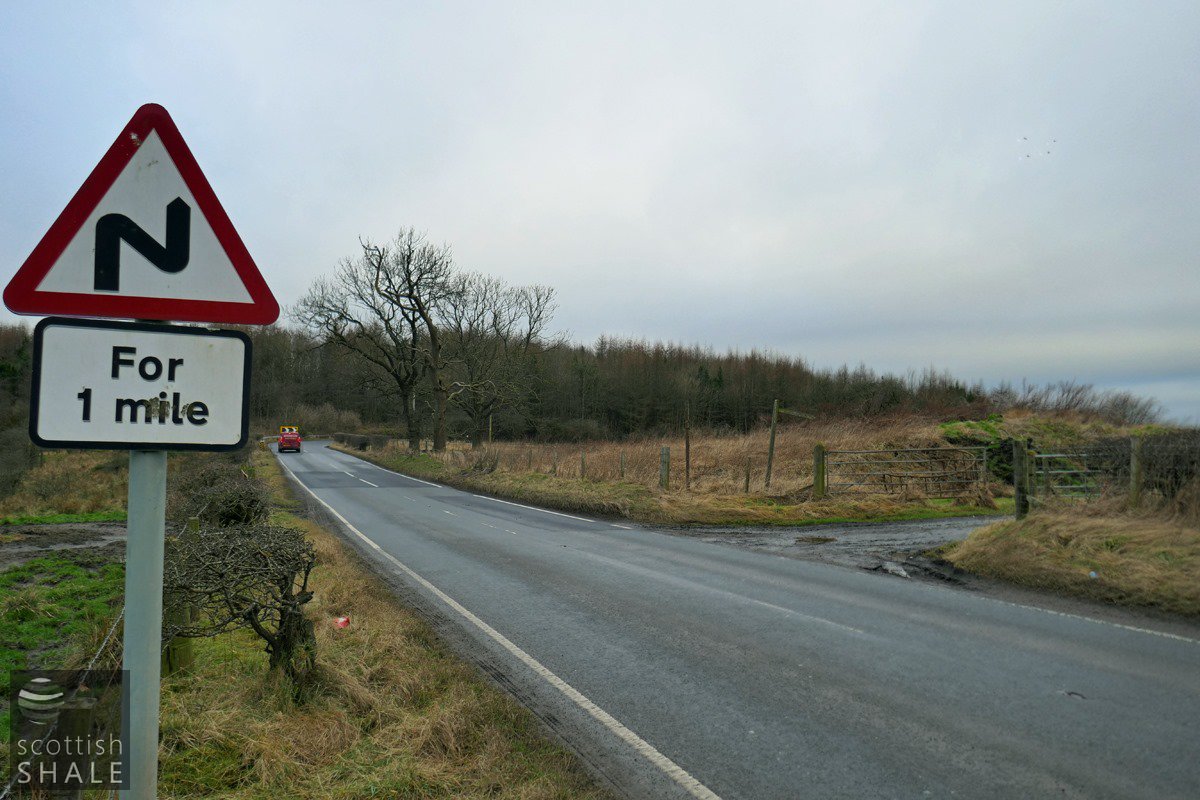 The site of Burnhouse farm, where the old drove road met the present day road to West Calder.

The road to Addiwell would once have carried straight on, but was deviated to allow the growth of Addiewell bing (now marked by trees). It seems that another toll gate once existed at this point.