The Sunday Bus in Livingston 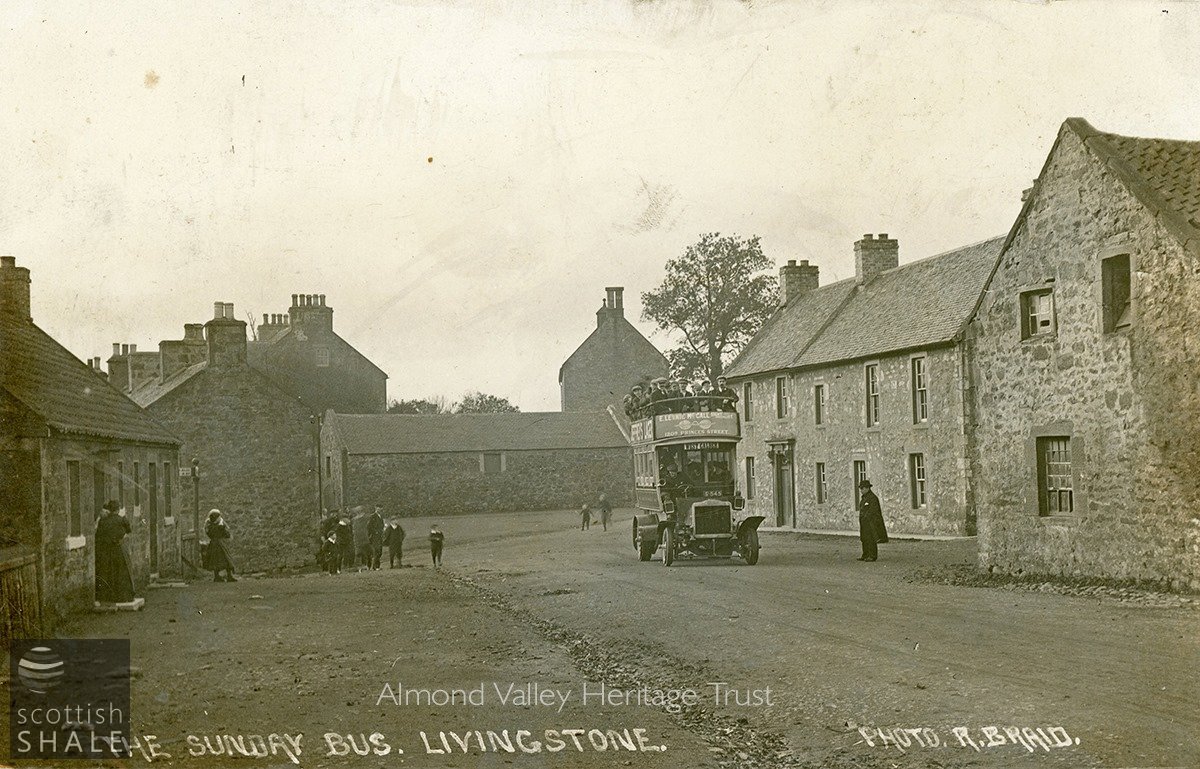 The Sunday Bus outside the Livingston Inn. The signpost on the left marks the road to West Calder, over the old Livingston bridge. As was often the case, it seems that photographer Robert Braid organised a huddle of attentive locals to bring extra interest to the scene.

Wind-blown, teeth rattling in their sockets, and flat caps torn by low-hanging branches; passengers on the top deck of the Sunday Bus will have have reached their destination a little dishevelled, but probably grateful to have avoided a long walk. Many may also have been proud to have been pioneers of a new form of transport that was poised to change everyday life. 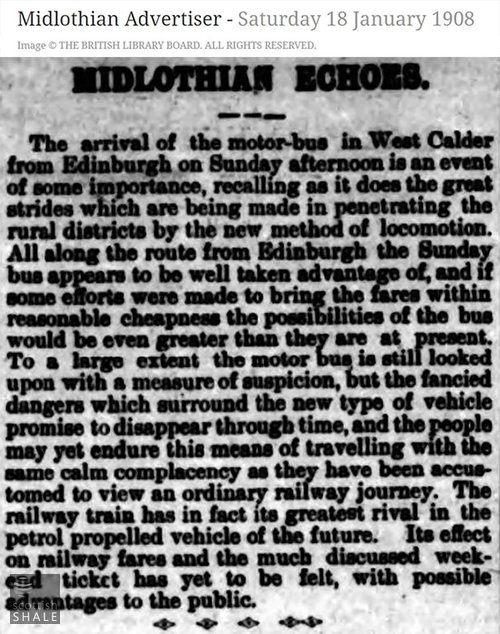 The first regular motor 'bus services in West Lothian began in about 1906. The Edinburgh-based Scottish Motor Traction Company was founded in 1905, and quickly extended a network of services between the city and surrounding districts. The route between Edinburgh and Queensferry was among the first established, followed soon afterwards by services to Uphall and Broxburn, and trial services by way of Winchburgh and Kirkliston. People quickly warmed to the convenience of travelling directly from the centre of villages (albeit at a stately 10mph), rather than enduring a long trudge to an outlying railway station. 'Buses were particularly popular on Sundays when few trains ran.

There were however drawbacks. The narrow solid-tyred wheels of heavy motor 'buses damaged the foundations of country roads and cut up their rolled-stone surface; creating dust in summer and mud after heavy rain. This significantly added to the cost of road repairs, paid from Council budgets, and soon led to experiments in applying tar emulsion to road surfaces, and subsequently to the use of coated roadstone to form “tarmac” surfaces. There were also many incidents of brake failures, vehicle fires, frightened horses, and collisions with people and animals.

The earliest design of 'bus (the commonly-used abbreviation for omnibus) used on these services were open-topped double deckers, similar in layout to horse omnibuses and tramcars used in towns. Many were built in SMT's own workshops. It soon became apparent that these top-heavy contraptions were poorly suited for the tight corners and low trees of country lanes, and within a few years were superseded by single-decked buses.

Early in 1907 it was rumoured that a new service linking Edinburgh with West Calder was about to announced. It was not however until January 1908 that the first regular service 'bus arrived in West Calder, seemingly piloted as a Sunday-only service.

The leaves on the tree in our photograph of “The Sunday Bus” suggests that it doesn't record this first public service in January 1908, but it does seem likely to have been taken on an earlier trial run, or later in 1908, when the new service was still a novelty. The photograph shows bus outside the Livingston inn, very close to photographer Robert Braid's home in Livingston post office. Braid seems to have captured other images of the 'bus, at various points along its route. The registration number – S545 – indicates how few vehicles had been registered in Edinburgh since 1904, when the vehicle registration scheme was introduced. 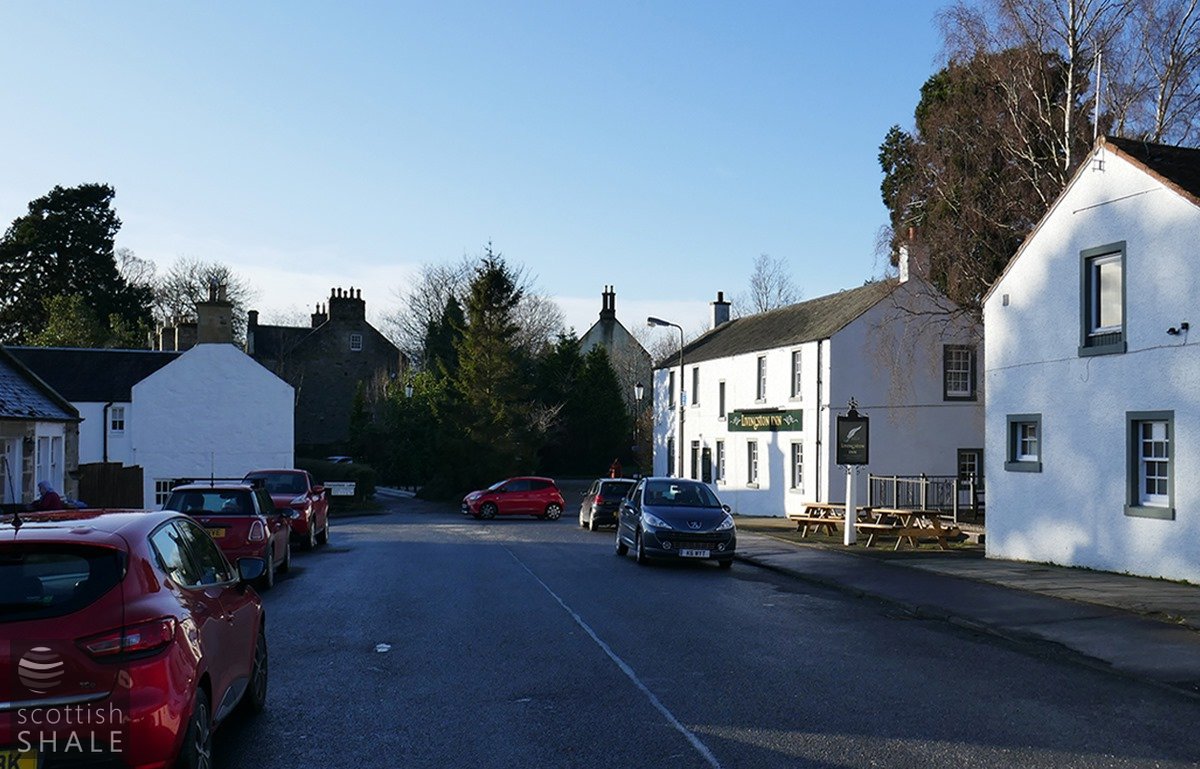 The same scene today, with not a bus in sight. 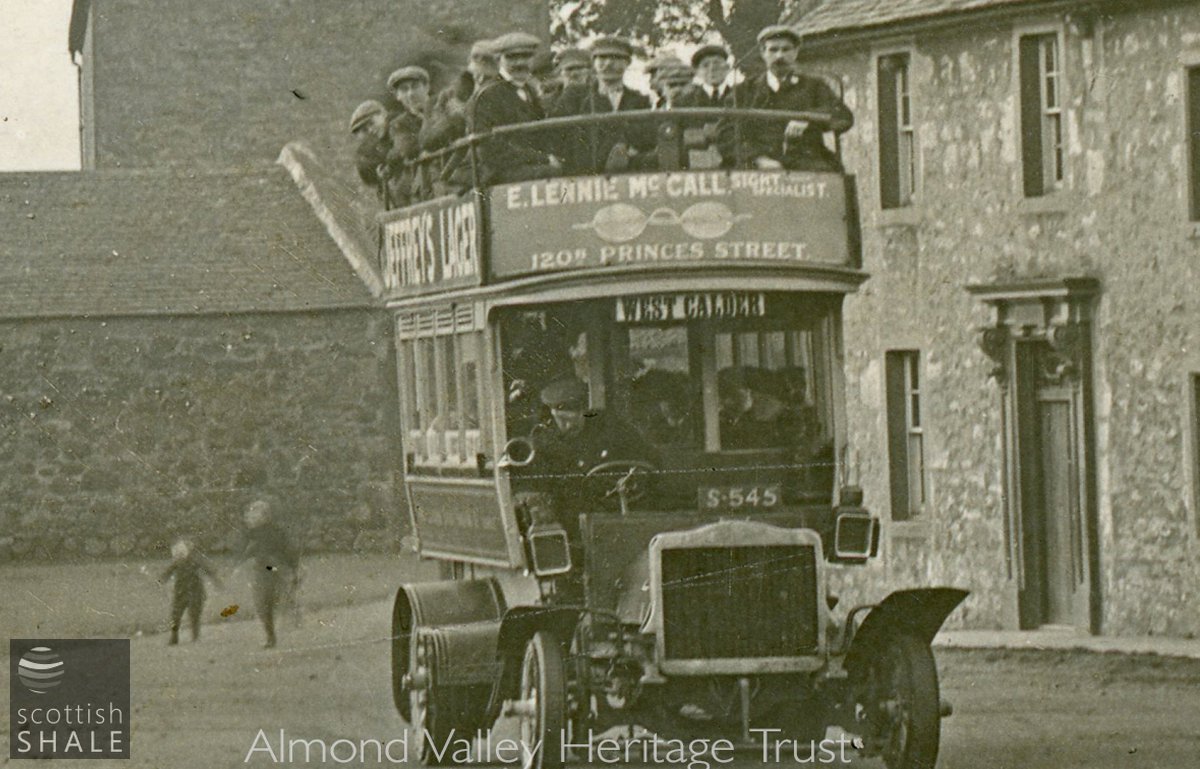 A close-up of the well-loaded bus.
Wrap up warm.