Temporary Towns of the Railway Navvies 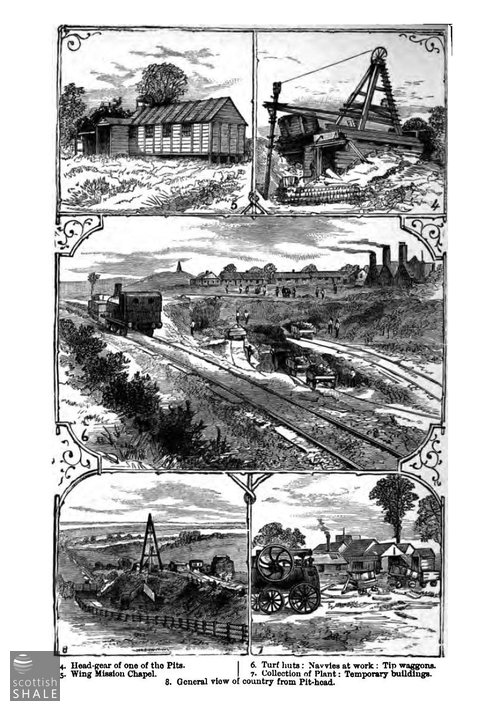 The construction of railways and other public works engaged a huge army of itinerant labourers, who might set up home in makeshift camps for a year or more, but move on as soon as their work was complete. These navvies were considered a race apart, often treated with fear and suspicion by the local community, and portrayed in the press as lawless, drunken, brutes.

As was usual, most of the navvy army engaged to build the Midcalder to Cleland railway were from Ireland. Construction of this new short route between Edinburgh and Glasgow via Shotts started in late 1865 and continued for three years. The job was split between two contractors; the eastern portion being taken on by John Waddell (later to become Provost of Bathgate) and the Western part by Matthew Waddell of Newmains. In an age before mechanical excavators, huge quantities of earth had to be moved by simple equipment and the muscle power of men and horses. During this tough work there were injuries and fatalities. Patrick Gallacher was killed at Williamston when he fell from a wagon which then ran over his chest. William Letham fell down dead while working near Crofthead. He was a married man, aged 43, who earlier that week had been diagnosed with incurable heart disease.

Over a thousand men were engaged in each contract, most of whom lodged in temporary settlements of wooden huts.

It seems that these temporary villages were built by the contractor, and each hut let out to a senior married worker. They might then be landlord to as many as twenty lodgers, for whom his wife and family would cook and clean in return for a regular rent. An incident was reported in which one (presumably intoxicated) lodger began bothering his landlady for money. Assisted by her 15 year old daughter (described as “stout and strong for her age”) they got hold of the man and threw him out of the hut. He then started smashing the hut windows with a poker “in true Hibernian style”, challenging his two female opponents to come outside for a fight. The two ladies stood firm until the local constable arrived.

John Waddell’s men were housed in a village of fifty huts close to the railway at Bellsquarry. These seem to have been constructed from timber panels for ease of dismantling, with a felt-covered roof. Other than five deaths from typhus during August 1866, the village was the scene of few further dramas and was taken down late in 1868.

Matthew Waddell’s contract for the western part of the line was more demanding, and took longer to complete. Most of his men were housed in “a series of wretched dwellings… nearly all occupied by the Irish” near Crofthead – one of a number of mining settlements that later became the village of Fauldhouse.

Trouble often broke out at the Crofthead huts on Saturday nights, once wages were paid and drink began to be consumed. In such exuberance, windows were broken, and sometimes doors and window sashes were ripped from their frames. This boisterous behaviour sometimes spilled over into the village of Crofthead. In April 1868, one particularly animated excursion in search of drink saw street fights, bricks thrown, and random strangers assaulted. Following a melee in a licenced grocers, Peter Curran, a navvy, stripped virtually naked and had to be covered with a policeman’s overcoat before being led away. Messrs Callaghan, Dochery, and Devlin (the latter known as “prize-fighter”) were charged with serious assault following the discovery of their insensible victim close to a large fence stob bespattered with blood.

There was further trouble in September of that year, when the annual Crofthead games were disrupted by drunken navvies. As night fell “various gangs of Irishmen began to show their riotous and mischievous tenancies” and armed themselves with bottles, tumblers, and candlesticks from Mrs Wyper’s public house. It was reported that “several respectable persons were attacked… and a number of quiet inoffensive people got cuts and bruises”.

Within a few months the railway was complete, the navvies had moved on, and a little peace returned to Crofthead.

Above right image: Very few images exist of navvy life during the 1860's. This engraving shows scenes in England in about 1880 from "Life and work among the navvies", by D.W. Barrett, the vicar of Nasington. The central engraving shows temporary living huts adjacent to the construction site. 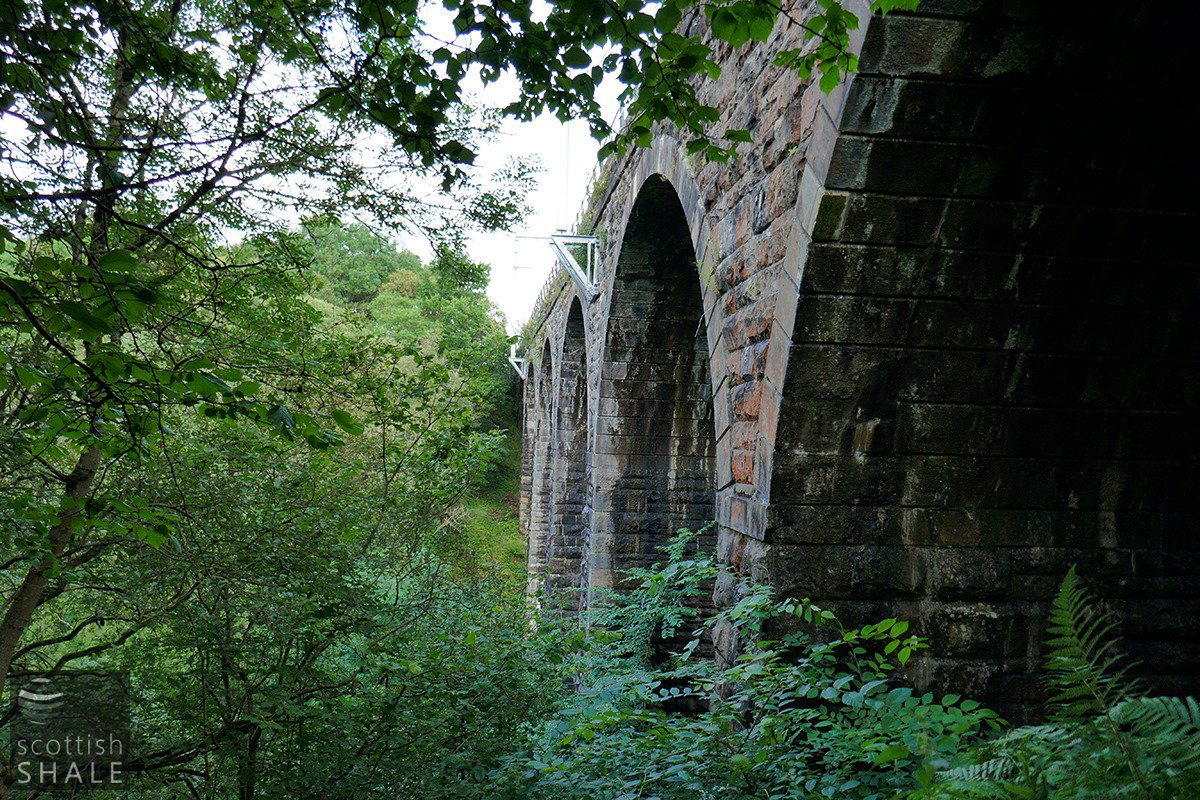 The work of John Waddell and the navvies of the Bellsquarry huts - the impressive, but difficult to photograph, viaduct over the Linnhouse water, about a mile south of Midcalder. 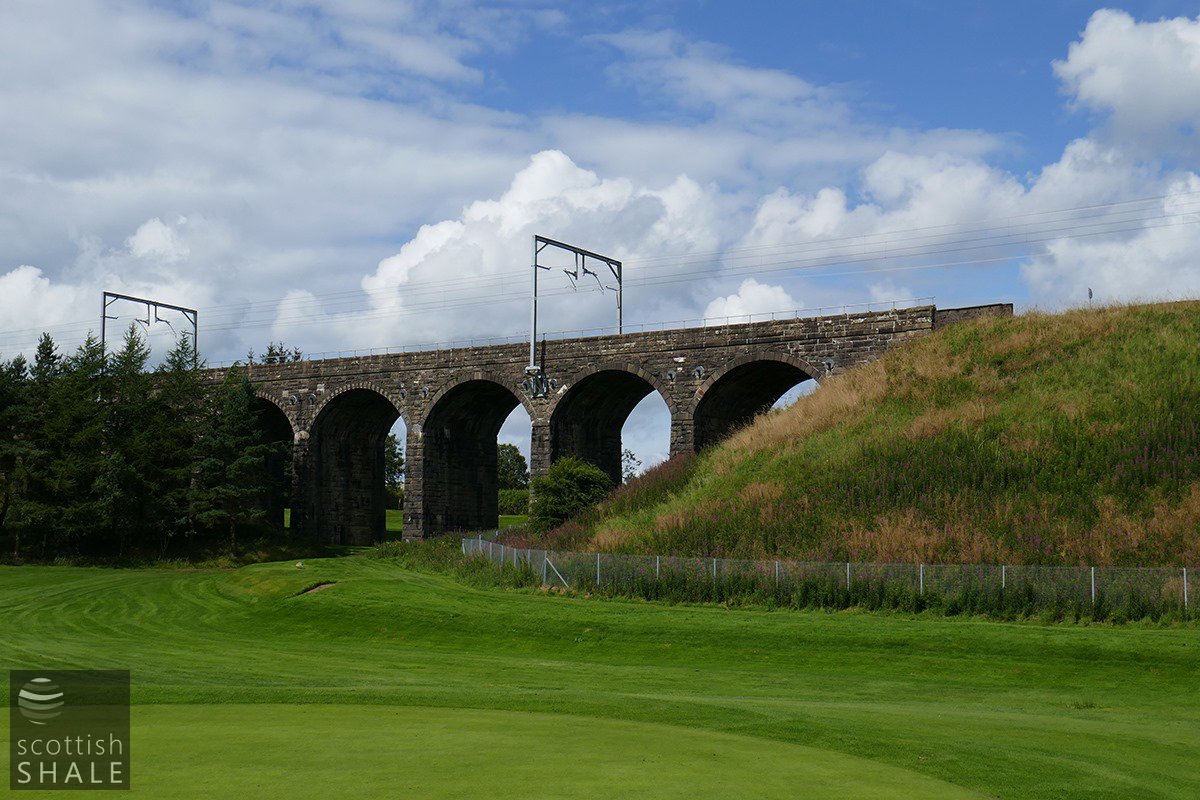 The work of Matthew Waddell and the navvies of Crofthead huts - the high embankment and viaduct acoss the valley of the Breich water at Greenburn golf club, Fauldhouse. 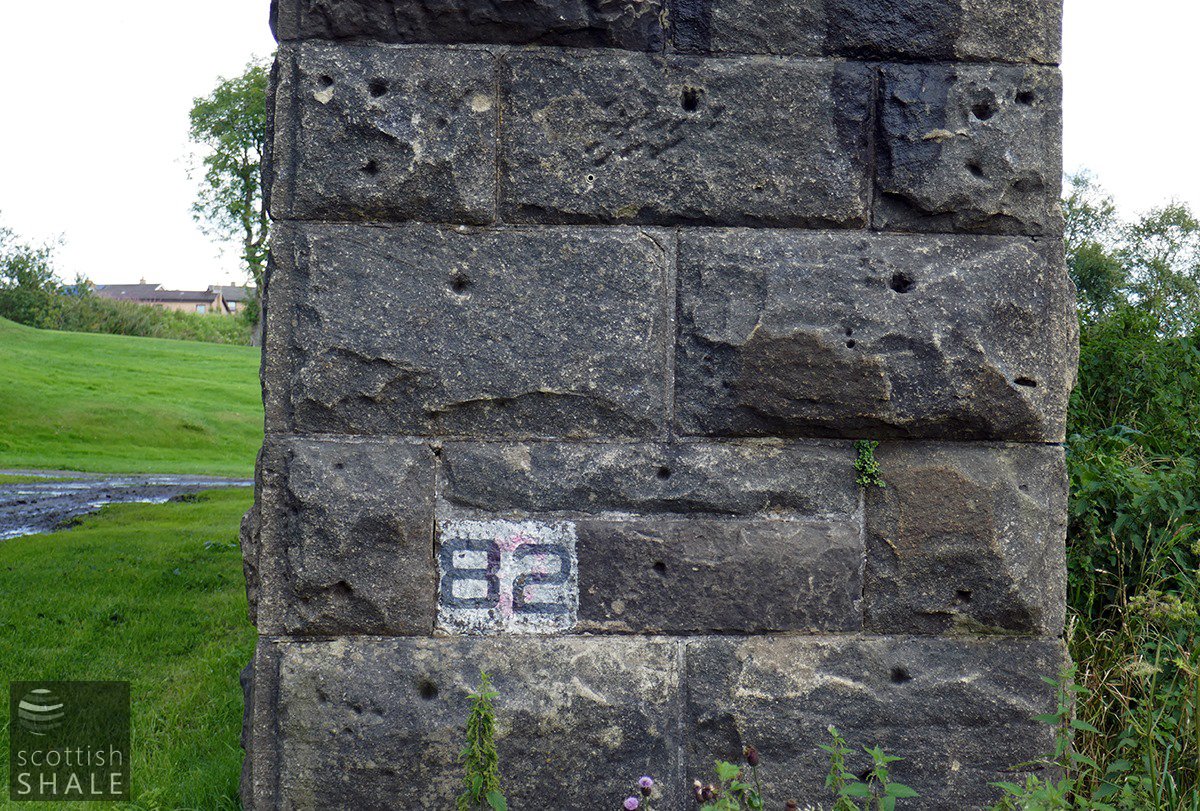 Pier of the Greenburn viaduct. The dimples in each stone allowed them to be gripped with "dog" clamps, and lifted into place with hand-cranked derrick cranes. 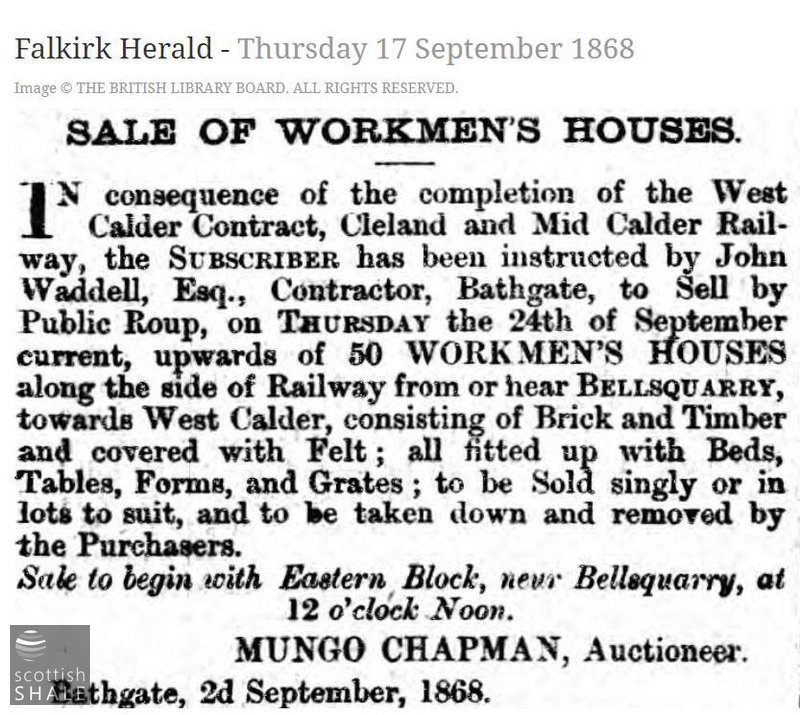 The navvy's village at Bellsquarry and its contents for sale after completion of the railway. 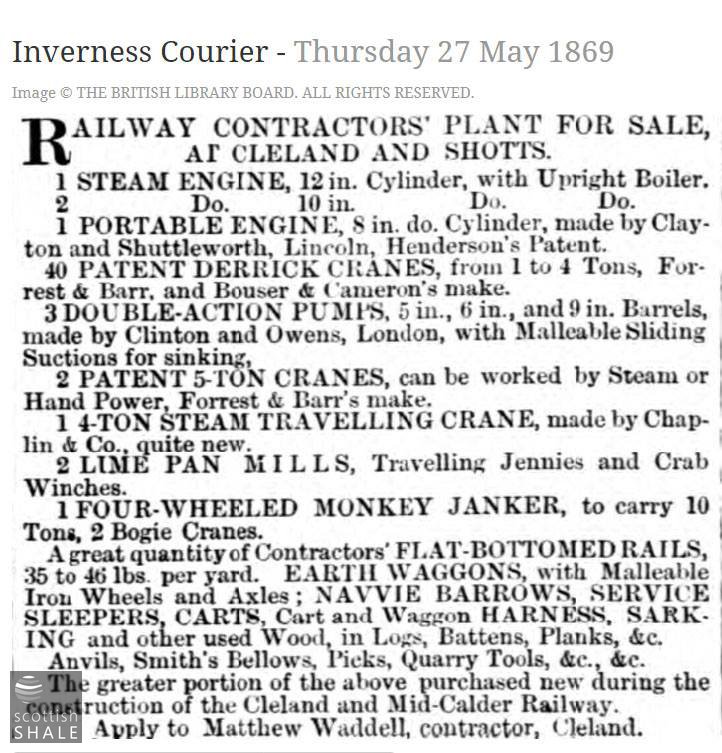 Contractors plant for sale following completion of Matthew Waddell's contract, This includes various cranes, small steam plant and pan mills for grinding mortar, most of which will have been used in construction of bridges and viaducts. Navvy/Navvie barrows and earth wagons would have been used for carrying away earth and spoil, but most of the excavation would still have to be carried out manually at that time.