The Children and their model church – pictured outdoors: seemingly on a roof terrace. 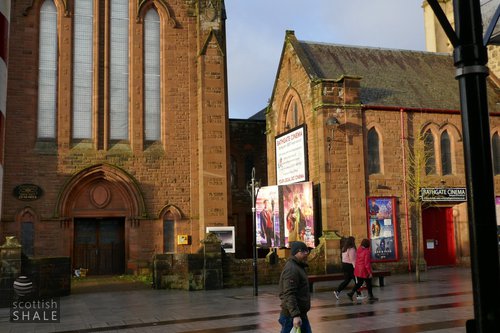 In May 1906, the first evening service held in Bathgate’s fine new St David’s Church was addressed by a noted professor of theology. The topic of Professor Smith’s speech was “the progress of Christianity among the best type of Eastern religions”. It reflected a missionary zeal that was common at that time, and seemingly driven by an unquestioning belief in the moral superiority of the western races and the Christian way of life.

The views expressed and the language that he used (“subordinate, dependent and defective races”) are offensive and unacceptable to modern ears, but doubtless reflected an underlying compassion, generosity and a desire to do good. In a similar manner many working folk gave generously of their money, time, and prayers to support the work of missionaries in foreign lands, helping to spread the word of the Lord and bring comfort to those less fortunate. 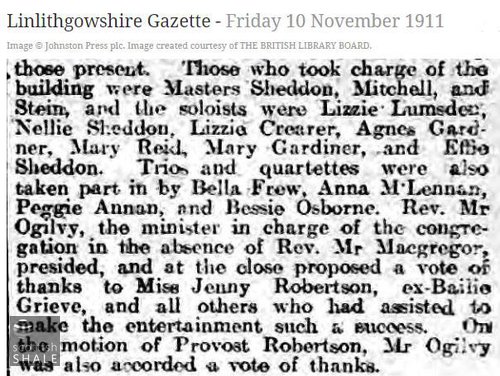 Illustrated talks on the work of missionaries were often presented in church halls and Sunday schools. These offered an intriguing glimpse into exotic places and the odd customs of the people who lived there; often brought to life with magic lantern slides, displays of tribal objects, and presenters who might dress as Africans or Arabs. Children found this entertainment particularly appealing.

Soon after the opening of St David’s Church, the Children's Missionary Band was formed under the direction of Miss Jeannie Robertson. The multi-talented troupe staged public shows that raised funds to support the education of an Indian orphan named Tai Ranoji and contribute to the work of the South China mission. The Band’s performances often included songs, short plays and bible readings, and sometimes also humorous monologues or dance routines. In summer, the children enjoyed an annual picnic excursions

Our photograph might record what was described as “an interesting and somewhat unique entertainment” that took place in St David's church hall in November 1911. As the children sung hymns, brick blocks bearing religious slogans, and text from the scriptures, were carried forward and gradually assembled into a model of St. David's church “from the foundation to the vane on the top of the tower”. It was reported that this “was followed with the closest interest by all those present.” Above right: St Davids – now Bathgate Cinema, - still Bathgate's best kept secret, with a view to the terrace between the Church hall and the main body of the kirk.